Esophageal cancer (EC) is the leading cause of cancer mortality in China, where it was responsible for over 193,000 deaths in 2014 (1). Approximately 90% of the new EC cases diagnosed each year are esophageal squamous cell carcinoma (ESCC). Despite the optimization of surgery, radiotherapy, and cytotoxic chemotherapy, the survival of patients with advanced ESCC remains poor, with an age-standardized 5-year relative survival rate of only 30% (2). Recent advances in genetic profiling have led to more refined molecular classifications of specific tumor entities (3-5). To determine the optimal therapeutic approach for a given patient with ESCC, prognostic biomarkers that would predict outcomes more accurately than existing ones are urgently needed. Gene copy number alterations are frequently found in human epithelial malignancies and often play an essential role in tumor development (5-7). The detection of these alterations may allow the development of novel diagnostic, prognostic, and predictive biomarkers, and promote the use of effective therapeutic regimens.

Sex determining region Y-box 2 (SOX2) is a highly conserved, single exon gene that is located at 3q26.33 and encodes for a 317-amino acid protein. SOX2 contains a high mobility group (HMG) DNA-binding domain and belongs to the SOX family of transcription factors, which are essential for preserving the pluripotency of embryonic stem cells and self-renewal capacity of tissue-specific adult stem cells (8). SOX2 has been found to be recurrently amplified in squamous cell carcinomas (SCC) of different organ sites, such as the head and neck (9), lung (10) and anus (11), and it is considered as a lineage-survival oncogene. In lung SCC (LSCC), SOX2 amplification is frequently observed and associated with favorable prognosis (10). In head and neck SCC (HNSCC), SOX2 activation is associated with improved prognosis (9). In sinonasal SCC (SSCC), SOX2 amplification is an independent indicator of disease recurrence (12).

Recently, with the availability of single-nucleotide polymorphism array and array comparative genomic hybridization, SOX2 was found to be amplified in 10% ESCC cases (13), which was a little less than 15–18% in other reports on ESCC (14,15). Few studies have explored the association between SOX2 amplification and patients’ prognosis. Some studies, wherein the clinical significance of SOX2 expression in ESCC was evaluated, had controversial conclusions. A study from Norway showed that SOX2 expression correlated with higher histological grade and poorer clinical survival (16). A later Japanese study showed the negative expression of SOX2 appeared to be an independently poor prognostic factor (17). Therefore, further studies are required to validate the prognostic role of SOX2 in patients with ESCC.

In the present study, we aimed to investigate the prevalence of SOX2 gene copy number changes in a large cohort of surgically resected ESCC patients using fluorescence in situ hybridization (FISH) analysis, and determine whether copy number alterations in selected genes affect patient outcomes. Furthermore, we examined whether gene amplification is associated with increased SOX2 protein expression in ESCC.

We present the following article in accordance with the REMARK reporting checklist (available at http://dx.doi.org/10.21037/atm-20-1290).

This retrospective study consisted of 450 ESCC patients who had undergone esophagectomy without neoadjuvant treatment at the Department of Thoracic Surgery, Zhongshan Hospital, Fudan University, China, between 2007 and 2010. The patients who exhibited disease progression within three months after surgery were excluded from further analysis. Clinical information including patient prognoses was obtained from stored medical and imaging records. Patients were followed up with a clinical examination every 3 months for the first year, every 6 months for the second year, and every 6–12 months thereafter. Histology slides were reviewed in terms of differentiation, depth of invasion, vessel and nerve invasion, and lymph node metastasis. Tumor stages were defined based on the 8th edition of the American Joint Committee on Cancer/Union for International Cancer Control (AJCC/UICC) pTNM-staging system for ESCC.

Informed consent forms were obtained from all patients, and the study was conducted in accordance with the approved ethical standards of Zhongshan Hospital (B2016-135), which conforms to the provisions of the Helsinki Declaration (as revised in 2013).

TMA construction was performed as previously described (18). Hematoxylin and eosin (HE) sections were evaluated and confirmed by two pathologists (DJ and YH), who validated diagnosis and marked normal tissue and carcinoma tissue as target areas for TMA construction. The regions of interest (2 mm wide and 6 mm long) were obtained from the corresponding donor blocks. Two to three representative cores of viable tissue from each tumor were included. Additional control cores of normal esophageal tissue were incorporated. Then donor tissues were then manually planted into the recipient block one by one according to the corresponding locations indicated by letters and numbers. The planting surface was aggregated on the aggregation instrument. Subsequently, the recipient block with a transparent box was incubated at 4 °C for 10 min until the paraffin could be easily separated from the transparent box. TMA recipient blocks were collected and sectioned on a routine microtome machine for further IHC and FISH staining.

To assess the SOX2 amplification status at the chromosomal level in TMA slides, we applied the same 2-color FISH assay as previously described by Wilbertz et al. (10). Briefly, a SOX2 target probe (red fluorescent signal) spanning the locus 3q26.33 and a green centromeric probe on chromosome 3 (Empire Genomics, New York, USA) were selected for hybridization. Only the nuclei that displayed green reference signals were included for determination of the SOX2 copy number status. All TMA slides were analyzed by two independent evaluators (J.H. and Q.S.) under an oil immersion objective using a fluorescence microscope (BX43; Olympus, Tokyo, Japan) equipped with a microscope digital camera (DP73; Olympus). In each case, we assessed at least 50 tumor cell nuclei.

Two red and two green signals in a cell were observed in a wild-type nucleus. A sample was considered amplified if SOX2 amplification was observed in at least 30% of the nuclei. Amplification status was defined according to the criteria established by Maier et al. (19). SOX2 amplification was defined as four red target signals exceeding the number of green signals. Three or more green reference signals were defined as chromosome 3 gain.

The IHC was performed on a Bond Max autostainer (Leica Microsystems, Wetzlar, Germany) according to the manufacturers’ instructions using SOX2 rabbit monoclonal antibody (clone SP76, dilution 1:300, Genetech, China). Normal IgG from the same species of primary antibody diluted to match the concentration of the primary antibody was used as the negative control.

For SOX2, only nuclear staining was considered specific. A Histo-score (H-score; range, 0–300) was calculated by multiplying the intensity score (0= negative; 1= weak; 2= intermediate; 3= strong) and the fraction score (percentage of positive tumor cells; range, 0–100) (20). All stained slides were scored independently by two investigators (HW and YH), who were blinded for clinical outcome. In cases of disagreement between the two investigators, slides were simultaneously reviewed by both investigators until a consensus was reached.

The results of FISH and IHC were analyzed in subgroups and compared with clinical parameters, histologic subtypes, and grade using χ2 or Fisher exact test, whichever was appropriate. Disease-free survival (DFS) was defined as the time between the date of surgery and the date of recurrence, death, or latest follow-up. Overall survival (OS) was defined as the interval between the date of surgery and the documented date of ESCC-associated death or latest follow-up. Survival curves were constructed according to the Kaplan-Meier method and compared using the log-rank test. Associations between clinicopathological factors and DFS/OS were estimated according to odds ratios (ORs) and 95% CIs. The factors with a P value <0.05 for either OS or DFS that met the proportional hazards criteria in the univariate analysis, were included in stepwise multivariate Cox regression.

Among 450 patients, 20 (4.4%) met the inclusion criteria (≥4 red target signals in no less than 30% tumor cells and less than three green signals), and were classified as cases with SOX2 amplification. Fifty-eight (12.9%) cases were defined as chromosome 3 gain with three or more green signals, among which 28 (6.2%) cases also had ≥4 red SOX2 signals in no less than 30% tumor cells. Low polysomy or disomy (82.7%) was observed in other specimens (Figure 1). 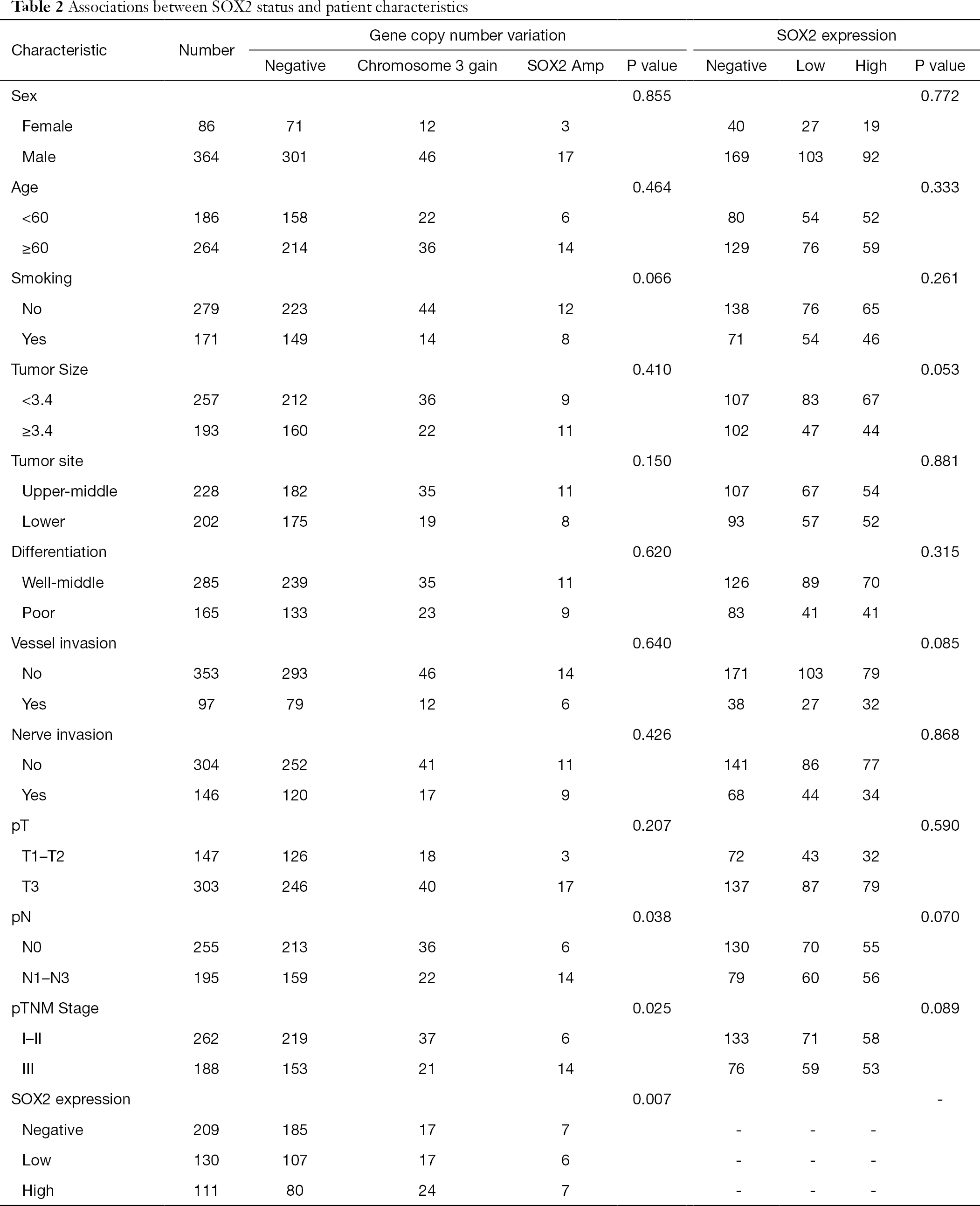 SOX2 expression and the clinicopathological characteristics 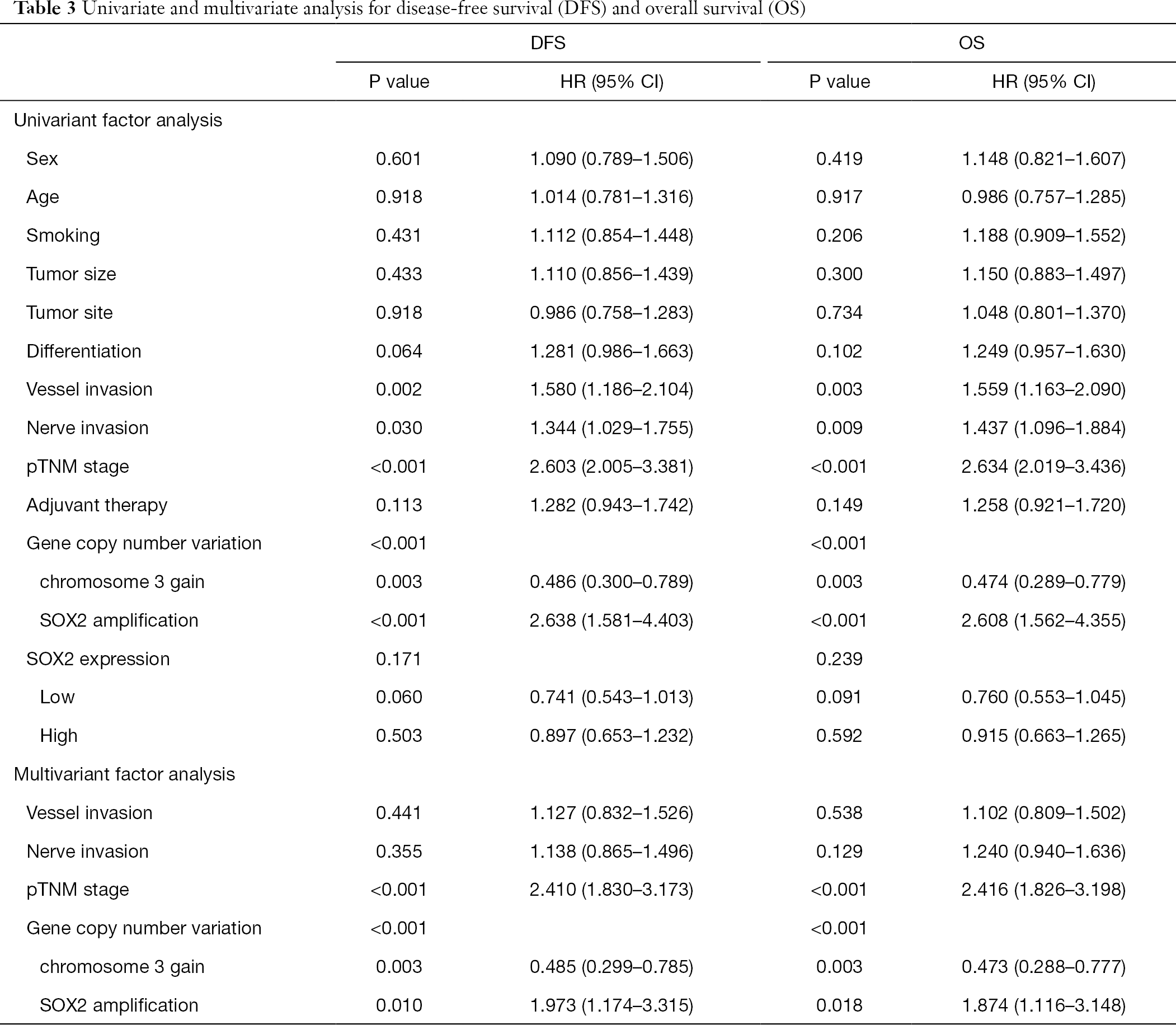 Identifying the copy number variation of target genes represents an important step toward understanding and potentially preventing the complex changes a cell undergoes during ESCC tumor development, which also facilitates the further outcome stratification and treatment decisions of these patients (5-7). The aim of our study was to elucidate whether SOX2 amplification is a common event in ESCC and to determine whether SOX2 amplification is correlated with prognosis. FISH analysis was performed to detect SOX2 copy number gains, followed by IHC SOX2 protein expression analysis. At present, there are no data available in literature on both SOX2 amplification and SOX2 expression in large scale of ESCC patients.

In our study, SOX2 was amplified in 4.4% ESCC, less than 10–18% in other ESCC reports (13,14,19). These variations in frequency are likely due to (I) the molecular method applied for detection of SOX2 copy number status, (II) the threshold set to distinguish gene amplification, (III) the differences between ESCC cohorts, and (IV) tumor heterogeneity (21). A key finding of this study was the observation that green signals (Chromosome 3 gain) were found in 12.9% ESCC, among which 6.2% tumors with SOX2 copies were ≥4 in more than 30% cells. If 6.2% patients were also regarded as SOX2 amplification, the percentage of 10.6% (6.2%+4.4%) was consistent with other reports in ESCC. However, it is possible that there are multiple targets for chromosome 3 gain, and co-amplification of adjacent oncogenes can have a synergistic effect. Other genes reported to be putative targets in chromosome 3 include PIK3CA (22,23), SKIL (24), TERC (25), DCUN1D1 (26), TP63 (27), and EVI1 (28). For example, PIK3CA, which is located at the 2.6 Mb centromeric side of SOX2 and DCUN1D1, which is located at the 1.2 Mb telomeric side of SOX2, are reported to be molecular biomarkers in many tumors (14,29). Therefore, the division of SOX2 amplification and chromosome 3 gain should be necessary. In clinicopathological analysis, SOX2 amplification was higher in later pTNM stage, however, chromosome 3 gain was higher in earlier pTNM stage (P=0.039).

Reporting Checklist: The authors have completed the REMARK reporting checklist. Available at http://dx.doi.org/10.21037/atm-20-1290

Conflicts of Interest: All authors have completed the ICMJE uniform disclosure form (available at http://dx.doi.org/10.21037/atm-20-1290). The authors have no conflicts of interest to declare.

Ethical Statement: The authors are accountable for all aspects of the work in ensuring that questions related to the accuracy or integrity of any part of the work are appropriately investigated and resolved. All patient provided their informed consent and the study was conducted in accordance with the approved ethical standards of Zhongshan Hospital (B2016-135), which conforms to the provisions of the Helsinki Declaration (as revised in 2013).