Diabetes and prediabetes may be diagnosed based on the value of fasting plasma glucose (FPG) and/or 2-hour postprandial plasma glucose (PPG) after an oral glucose tolerance test (OGTT). A high plasma glucose level can cause β-cell dysfunction by changing the pulsatility pattern of insulin secretion (5). Moreover, high glucose levels lead to upregulated expression of ATP-conducting mitochondrial outer membrane voltage-dependent anion channel-1 (VDAC1), resulting in cellular ATP depletion and impaired glucose-stimulated insulin secretion (6). Although overexpressed VDAC1 does not cause islet apoptosis itself, high VDAC1 levels combined with a high glucose concentration (20Mm), markedly increase the apoptosis rate (6). In recent years, there has been increasing awareness of the clinical value in assessment of glucose fluctuation (GF), which is regarded as a type of glycemic disorder, separate from high FPG and PPG, present in individuals with diabetes and prediabetes (7). GF is closely associated with oxidative stress and an inflammatory response, which may in turn aggravate β-cell dysfunction and diabetic complications (8-12). A German study based on a population with T2DM suggested that glycemic variability was strongly related to postprandial β-cell function for individuals taking oral hypoglycemia drugs (13). Another study using an in vitro model further demonstrated that intermittent high glucose could promote β-cell dysfunction by increasing oxidative stress, leading to apoptosis (14). GF was also suggested to have harmful effects to endothelial function in both healthy controls and in individuals with T2DM (15). In most clinical studies, GF is estimated based on the mean amplitude of glycemic excursions (MAGE) computed from 3-day continuous glucose monitoring, however, the most common short-term GF may occur after a meal. Indeed, Polonsky and colleagues calculated the short-term GF by subtracting the minimum from the maximum glucose level during the 2-hour OGTT, which was associated with the plasma levels of oxidative stress markers in both individuals with diabetes and NGT (16). Another study used the difference between the maximum and minimum glucose levels during the 4-hour OGTT as a GF indicator in patients with coronary artery disease, which was closely associated with β-cell function and inflammation markers (8). Thus, the difference between maximum and minimum glucose levels during the 2-hour OGTT may be an accurate short-term indicator of GF and could have important downstream effects for the body.

Although most previous studies on GF have focused on its role in diabetes, GF is also closely associated with future incident cardiovascular disease and malignancies in the nondiabetic population (17,18), demonstrating the need for more attention to be paid to the role of GF in individuals with NGT. Moreover, identifying the risk factors of diabetes in individuals with NGT will help in devising strategies for delaying the development of diabetes. Toward this end, the aim of the present study was to explore the association between short-term GF, estimated as the maximum-minimum glucose levels during the 2-hour OGTT, plasma inflammation and oxidative stress markers, and β-cell function in a Chinese population with NGT. These findings can provide more evidence on the role of short-term GF in the development and progression of diabetes.

We present the following article in accordance with the MDAR checklist and the STROBE reporting checklist (available at http://dx.doi.org/10.21037/atm-20-6119).

This study was based on a T2DM project conducted in the Changping district of Beijing from 2014 to 2015, which is described in detail elsewhere (19). A total of 599 participants were recruited and completed questionnaires related to baseline characteristics, including age, gender and medical history. Detailed physical examination including body mass index (BMI) and blood pressure, were also performed. After a 2-hour 75-g OGTT, diabetes and prediabetes were diagnosed in accordance with the 1999 World Health Organization criteria. Participants diagnosed with diabetes or prediabetes, a 2-hour PPG ≤2.8 mmol/L, or missing data of glucose levels were excluded from the present analysis, whereas some individuals with missing data of markers of inflammation [tumor necrosis factor-α (TNF-α, n=35) and interleukin-6 (IL-6, n=36)] and oxidative stress [8-oxo-2'-deoxyguanosine (8-oxo-dG, n=36) and superoxide dismutase (SOD, n=35)] were nevertheless included in the analysis. Finally, a total of 209 adults of Chinese Han ethnicity aged from 19 to 73 years with NGT (FPG <6.1 mmol/L and 2-hour PPG <7.78 mmol/L) were enrolled in the study (Figure 1), including 64 men and 145 women. 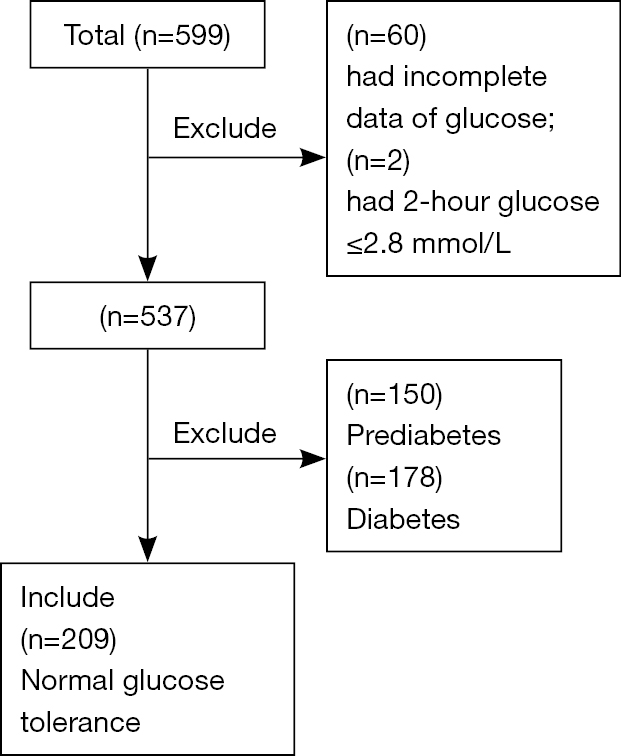 Figure 1 The ﬂow chart of the population-based study.

The study was conducted in accordance with the Declaration of Helsinki (as revised in 2013). The study was approved by the Ethics Committee of Peking Union Medical College Hospital (Approval Number: ZS-1274) and informed consent was taken from all individual participants.

Association of GF with clinical and demographic characteristics

Clinical and demographic characteristics of the participants based on tertiles of GF are shown in Table 1. The median GF of individuals was 2.37 mmol/L (IQR, 1.54–2.80), 4.07 mmol/L (IQR, 3.76–4.49) and 5.96 mmol/L (IQR, 5.34–7.38) in the lowest, middle and highest tertile, respectively. Compared with individuals in the lowest GF tertile, those in the highest tertile were more likely to be older, male, and also had higher levels of UA and HbA1c (all P<0.05). In terms of β-cell function, individuals in higher GF tertile had lower DI30 and DI120 values (P<0.001) than those in the lowest tertile of GF, whereas there were no significant differences in insulin resistance index among the three GF groups. 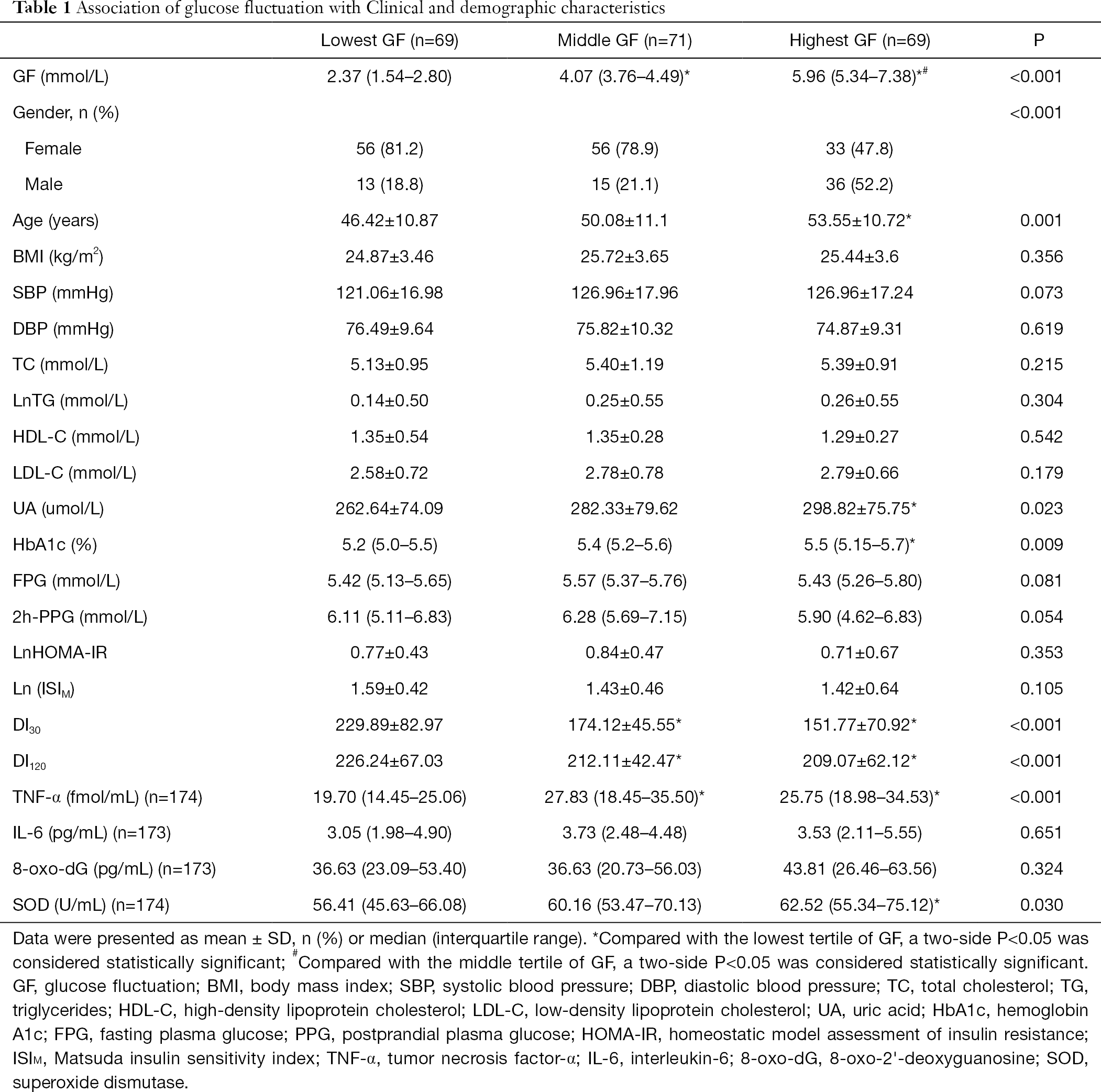 Individuals with higher GF also exhibited higher values of plasma TNF-α and SOD than those in the lowest GF tertile (P<0.05), whereas the differences in IL-6 and 8-oxo-dG among the three groups did not reach statistical significance. 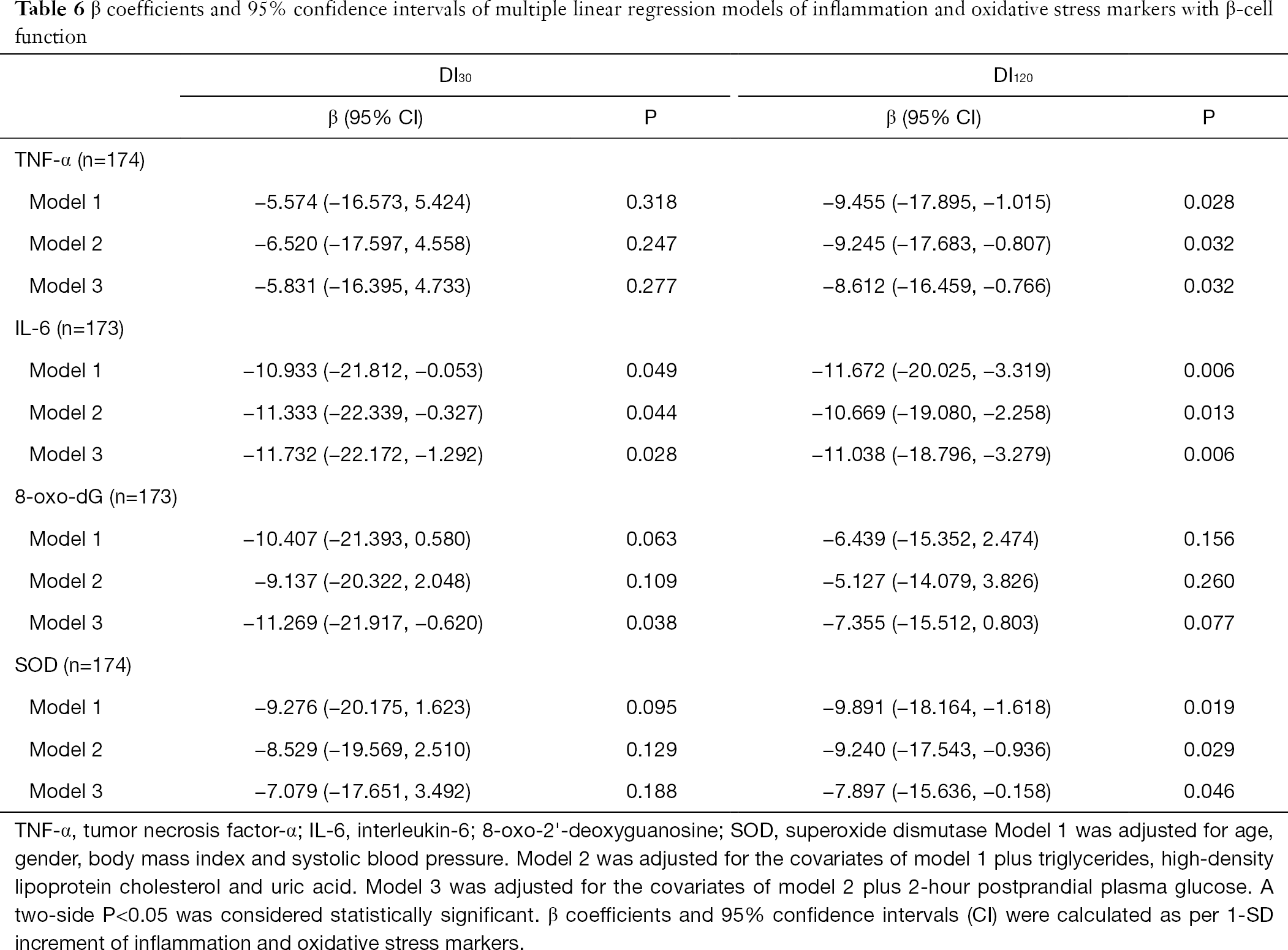 In addition to the aggravation of β-cell dysfunction, GF has been shown to play critical roles in the occurrence and development of diabetic complications (12,34). Glucose variability was an independent risk for future incident cardiovascular disease even in individuals without diabetes (18). Interestingly, we found that GF was independently associated with oxidative stress and inflammation markers in patients with NGT, which may have detrimental effects promoting the development of metabolic disorders. From this point of view, diet and exercise intervention to regulate GF, and ultimately decrease inflammation and oxidative stress to delay β-cell dysfunction, should be a general recommendation, irrespective of an individual’s glucose tolerance status.

These findings therefore offer a new perspective for diabetes prevention and treatment, while drawing attention to the role of GF after a meal. Our study also had some limitations. First, the cross-sectional design makes it difficult to yield a causal relationship, and longitudinal mechanistic studies are warranted. Nevertheless, the major results are supported by previous clinical and preclinical studies (14,15,29-33). Second, we only included Chinese Han individuals, and thus further study is needed to explore whether the results apply to other ethnicities. However, restricting the sample to a single race also reduced the possibility of introducing other confounding factors common in multiethnic studies.

In conclusion, as a simple indicator of GF, the difference between maximum and minimum glucose levels during the 2-hour OGTT was positively associated with inflammation and oxidative stress markers but negatively associated with β-cell function in a Chinese population with NGT. GF may increase plasma inflammation and oxidative stress markers in individuals with NGT, which could contribute to reduced β-cell function. Thus, maintaining glucose stability after a meal may have beneficial effects even in individuals with NGT, and diet and exercise strategies to decrease diet related GF are warranted to delay or prevent the development of diabetes.

Reporting Checklist: The authors have completed the MDAR checklist and the STROBE reporting checklist. Available at http://dx.doi.org/10.21037/atm-20-6119

Conflicts of Interest: All authors have completed the ICMJE uniform disclosure form (available at http://dx.doi.org/10.21037/atm-20-6119). The authors declare that they have no conflicts of interest.

Ethical Statement: The authors are accountable for all aspects of the work in ensuring that questions related to the accuracy or integrity of any part of the work are appropriately investigated and resolved. The study was conducted in accordance with the Declaration of Helsinki (as revised in 2013). The study was approved by the Ethics Committee of Peking Union Medical College Hospital (Approval Number: ZS-1274) and informed consent was taken from all individual participants.