Currently, the treatment of rectal GISTs is controversial, especially for middle and low rectal tumours (6-9). In the past, if local resection could not be completed, anterior rectal resection or the Miles procedure would be chosen. However, extensive resection leads to increased trauma and a high rate of postoperative complications, potentially leading to a long recovery and more pain for patients. Even so, the recurrence rate of rectal GISTs is still reported to be as high as 20–50% (10), which is related to the biological behaviour of the rectal GIST itself and the difficulty of surgical resection.

Due to the unique position and rarity of lymph node metastasis of rectal GISTs, it is possible to perform local resection by the transsacrococcygeal (TSC), transanal, transvaginal or transperineal approach. TSC approach is suitable for specific patients. It offers several advantages, including the possibility of obtaining better exposure, and of avoiding the risk of genitourinary and anal dysfunctions following total mesorectum excision (TME) (11,12). In recent years, surgeons in The Sixth Affiliated Hospital have performed TSC resection for middle and low rectal GISTs, but this approach is rarely used in other institutions (13,14). Therefore, we retrospectively evaluated rectal GISTs that were removed by the TSC approach in terms of clinical characteristics and outcomes and assessed the response to pre- and postoperative imatinib therapy. We present the following article in accordance with the STROBE reporting checklist (available at http://dx.doi.org/10.21037/atm-20-8204).

A retrospective analysis of rectal GIST cases was performed based on patients treated at The Sixth Affiliated Hospital, Sun Yat-sen University from February 2008 to February 2018 (Figure 1). The enrolment criteria for this study were: (I) diagnosis with rectal GIST by two professional pathologists based on histopathology and immunohistochemical study; (II) complete clinicopathological data; (III) resection of rectal GIST by the TSC approach and (IV) postoperative follow-up for at least 1 year. The exclusion criteria were: (I) other serious diseases; (II) distant metastases at the time of surgery or presenting with other rectal tumours; and (III) death caused by other diseases. The primary outcomes were disease-free survival and anal function. The secondary outcome was the rate of complications. 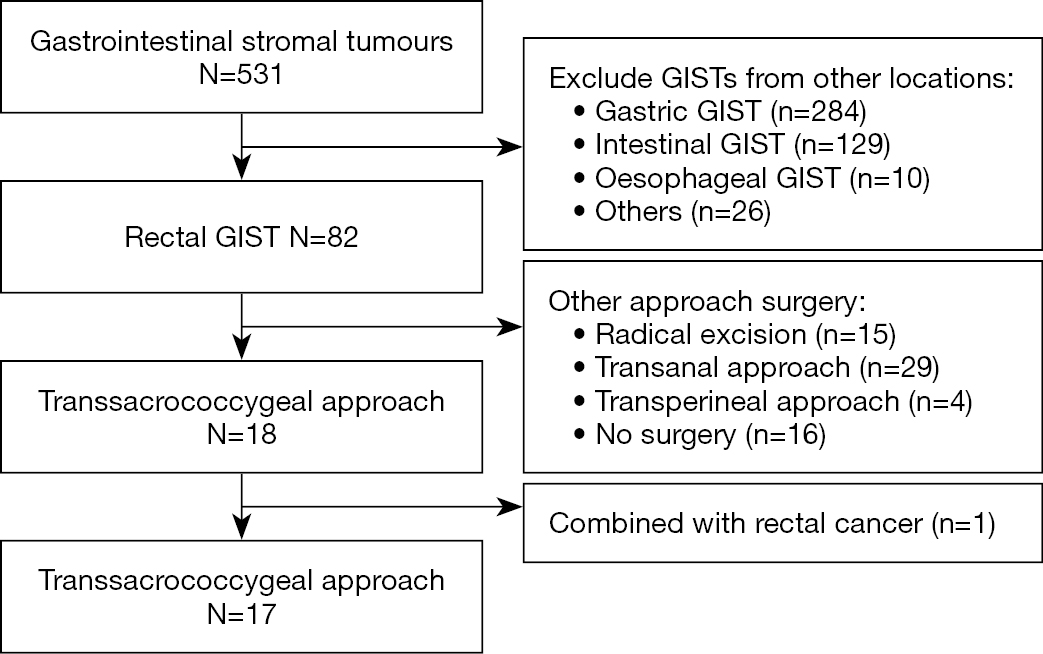 All procedures performed in this study involving human participants were in accordance with the Declaration of Helsinki (as revised in 2013). This study was approved by the Research Ethics Committee of the Sixth Affiliated Hospital of Sun Yat-sen University, Guangzhou, China (2018ZSLYEC-099), and all patients provided informed consent for participation.

The diagnostic information included the imaging and pathological findings. The following clinical data were collected and collated: age, sex, preoperative treatment, surgical and postoperative outcomes, and pathological outcomes. A core biopsy was used to confirm histology before treatment. All patients underwent computed tomography and magnetic resonance imaging (MRI) examinations before operation, and the tumour size was obtained from high-resolution MRI. The modified National Institutes of Health (NIH) risk system was used to assess the risk of recurrence. Tumour response evaluation was assessed by RECIST 1.1 (15).

All data are described as the mean ± standard deviation or n (%). Statistical analyses were performed using SPSS version 25.0 (SPSS, Chicago, IL, USA), and survival curves were generated using GraphPad Prism 8.0 (San Diego, CA, USA). One patient who was lost to follow-up was also included in the study 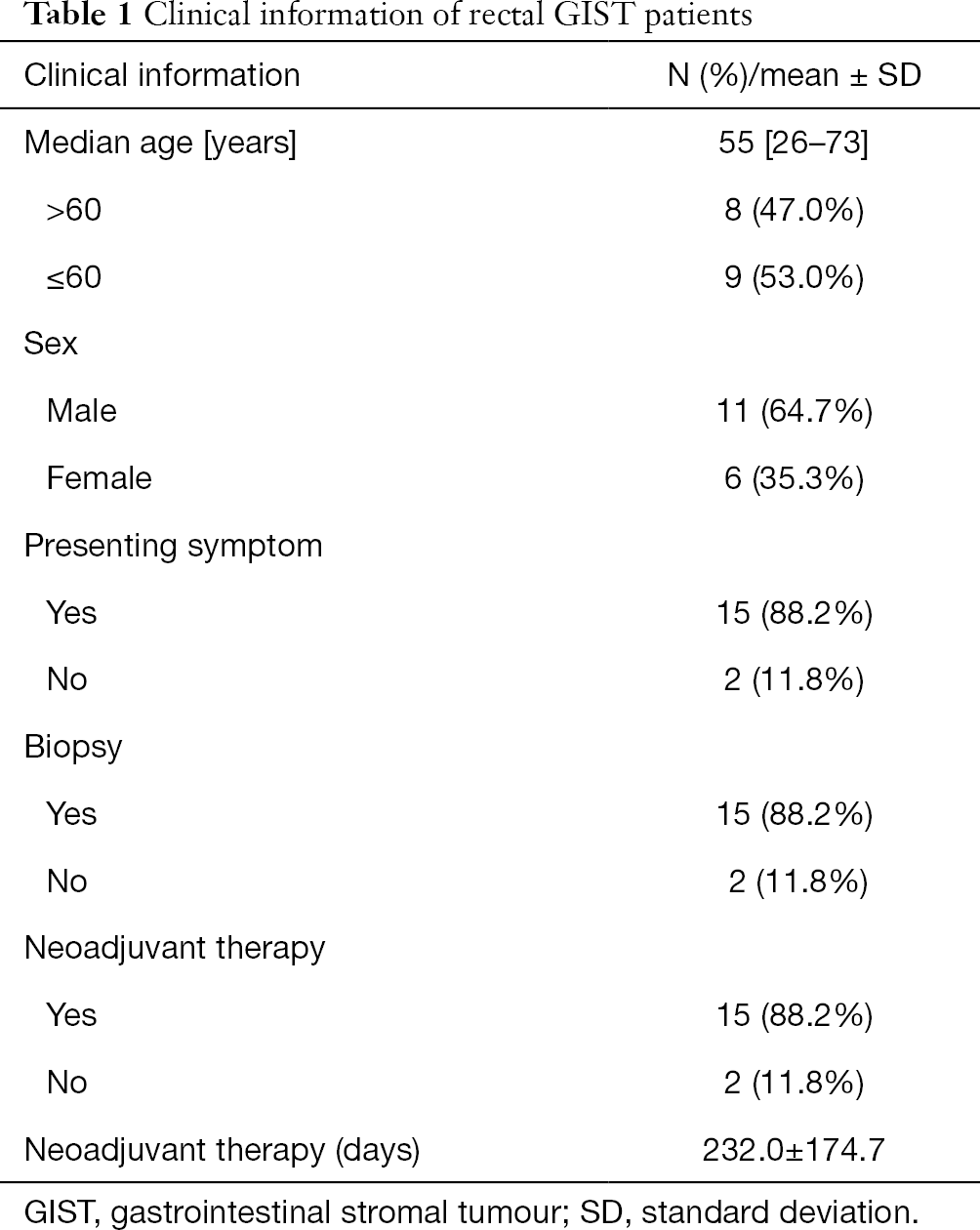 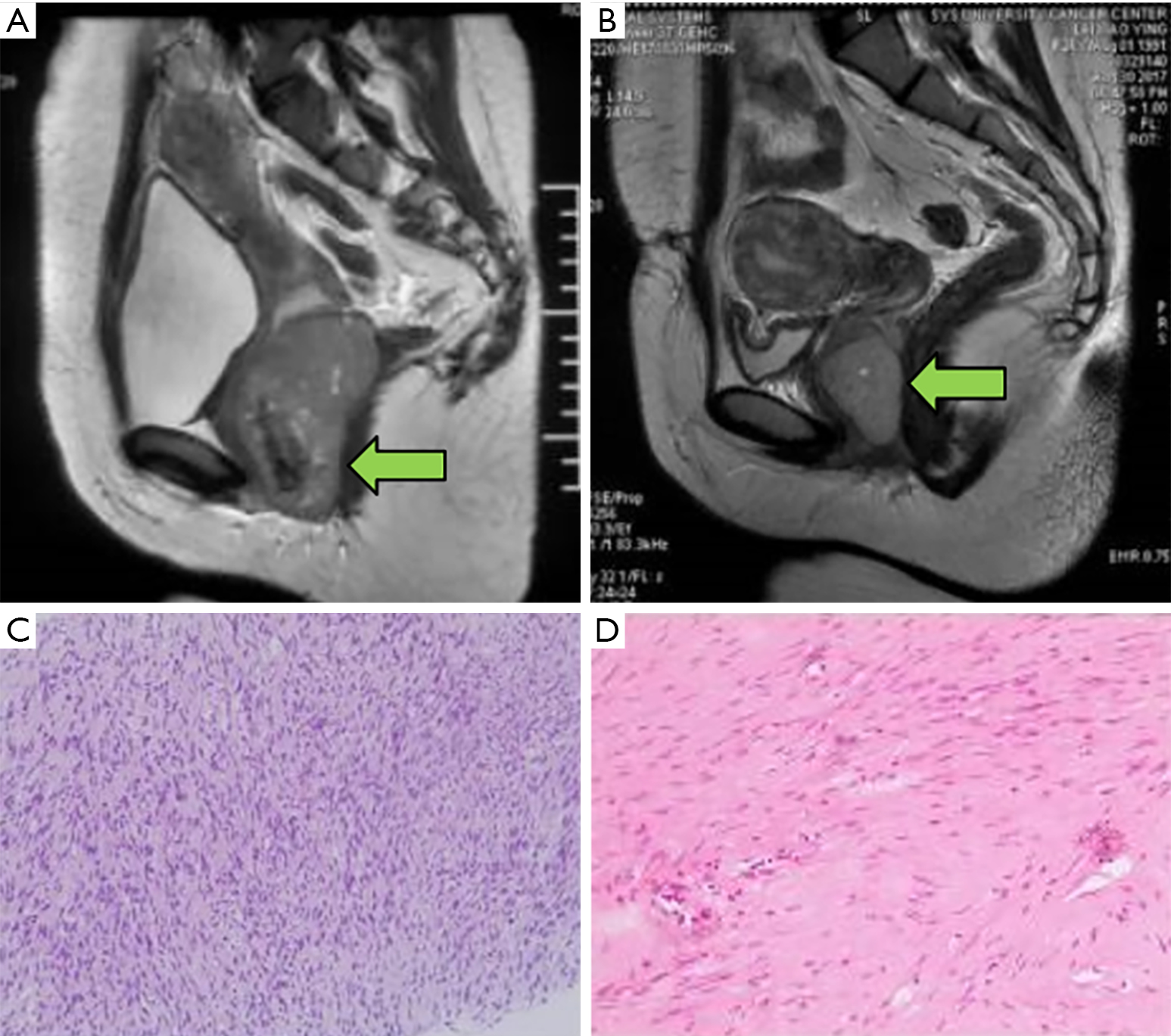 All patients underwent TSC resection of rectal GISTs, and imatinib was discontinued 2 weeks before surgery. The mean operation time, blood loss and postoperative hospitalisation stay were 130.2±47.4 min, 44.6±36.0 mL, and 25.4±14.3 days, respectively (Table 3). All patients had a negative surgical margin, and 1 patient experienced tumour rupture during the operation. Two patients underwent prophylactic ileostomy. Postoperative complications (within 30 days postoperative) occurred in 7 patients (41.2%) and included 5 cases of leakage and 2 cases of poor wound healing. Among the 5 cases of leakage, 4 patients had rectal leakage, and 1 had a rectovaginal fistula. Case 1 and Case 3 with rectal leakage recovered after conservative treatment, including unobtrusive drainage and irrigation, but the hospital stay was relatively long, and Case 2 underwent sigmoidostomy (Table 4). In Case 4, the tumour had invaded the posterior wall of the vagina, which was partially excised and repaired by a gynaecologist. This patient had a rectovaginal fistula after surgery and underwent colostomy, which could not be closed after several months because of existing leakage. In Case 7, postoperative sacrococcygeal incision debridement was performed 7 days after surgery, and ileostomy was performed 12 days after surgery. After 5 months, anal stenosis was found, and it was not possible to close the stoma. Anal dilation was treated, and the stoma was closed 15 months later. 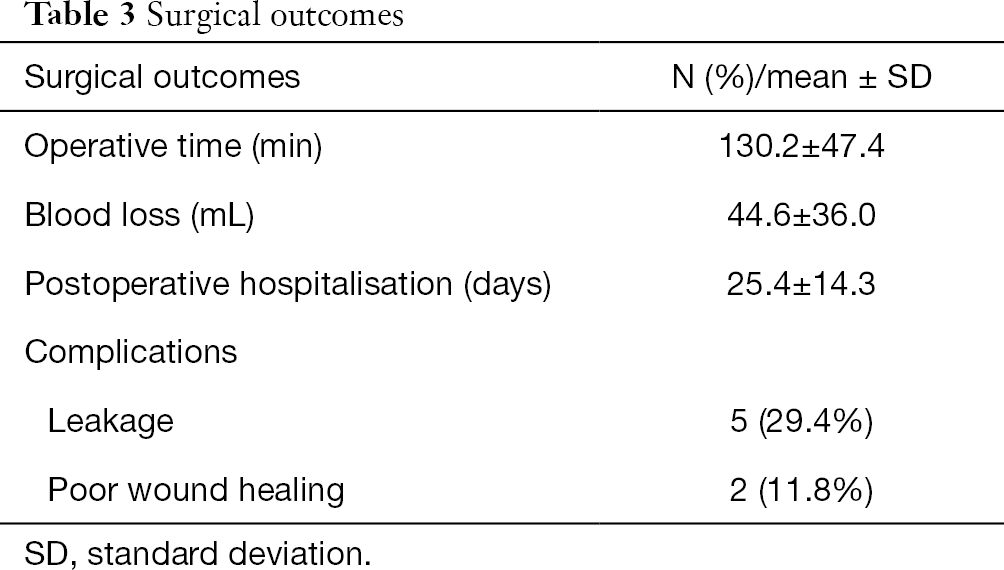 After the operation, 14 patients received imatinib treatment, which lasted more than 1 year (1–8 years). Of the 17 patients, 1 was lost to follow-up, but the others survived to the most recent follow-up evaluation. Patients were followed up for a range of 17–99 months, with a median of 52 months (Table 5). There was 1 case of recurrence 1 month after surgery. Subsequently, the tumour was treated with imatinib for 6 months, but did not shrink, so the patient underwent resection by the TSC approach again, and postoperative treatment with imatinib has been performed to date. All patients had a good survival prognosis (Figure 4). All patients had a LARS score ≤9 points at 1 year after the operation, and none had anal dysfunction (Table 6). 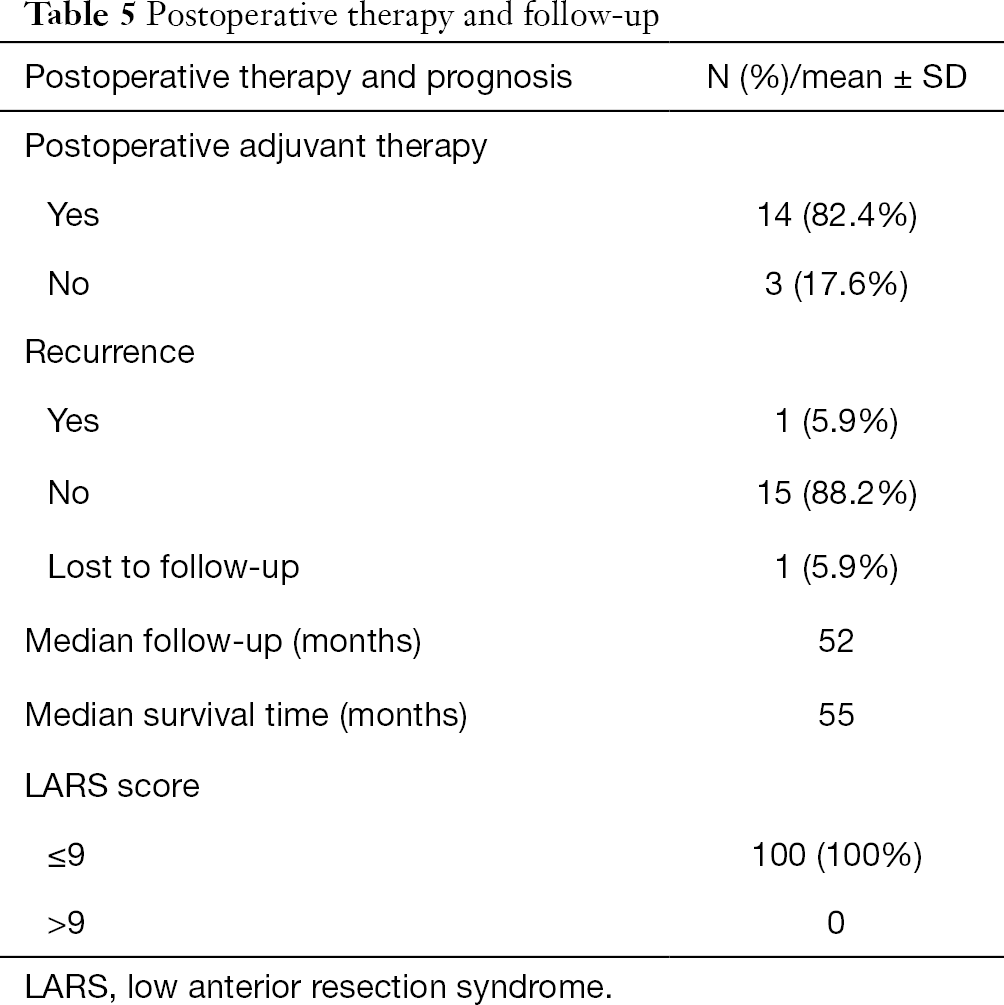 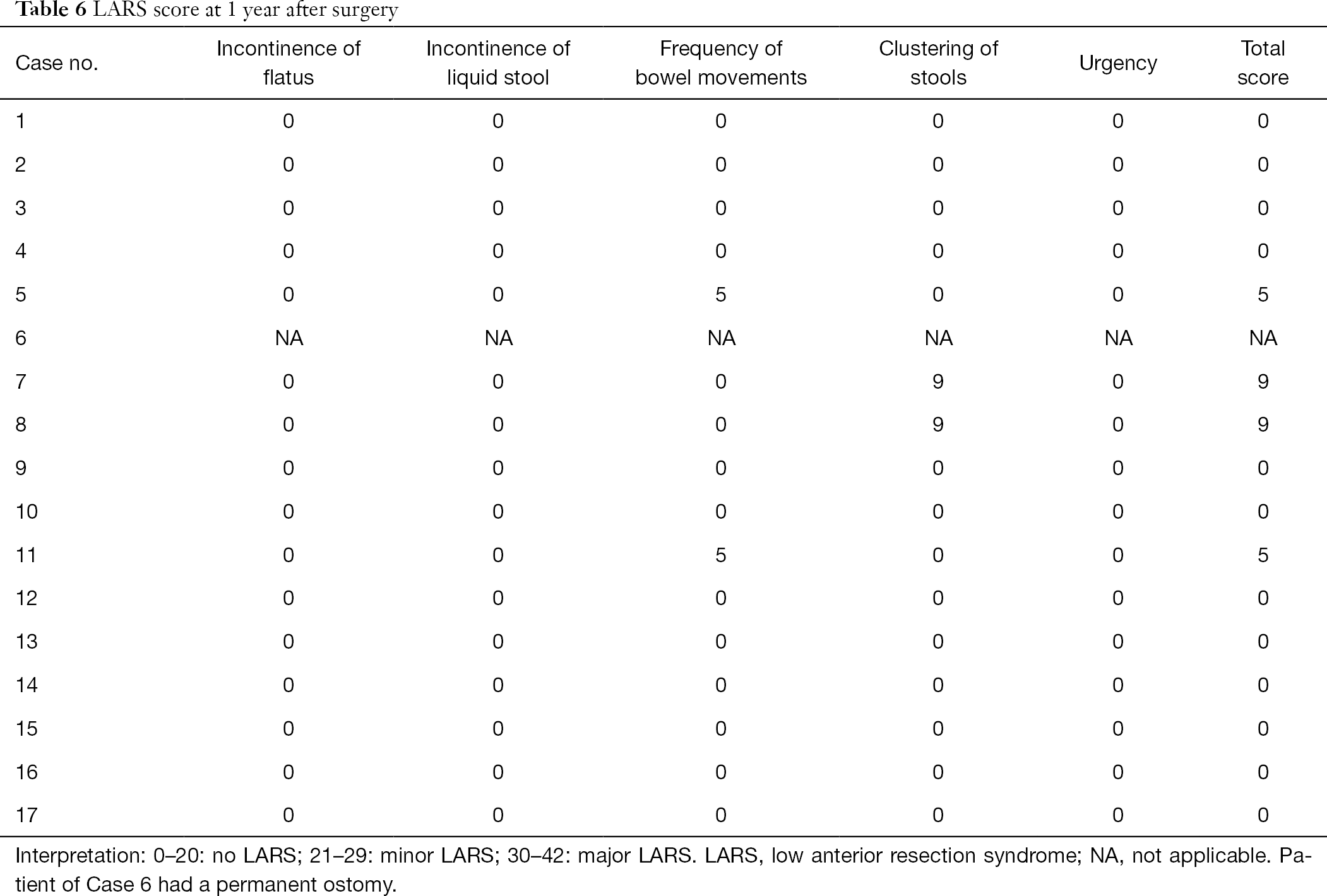 Due to their low incidence and limited clinical studies, the treatment of rectal GISTs is still controversial. Surgical resection is the main treatment method (18,19), including local resection and radical excision. Local resection includes transanal, transperineal, and TSC approaches. Radical excision mainly consists of lower anterior resection and the Miles procedure, and will cause increased trauma and the loss of some physiological functions. In this study, 19.3% of patients with rectal GISTs underwent TSC resection, a proportion that was higher than in Jakob et al.’s (1/38) (14) and Wilkinson et al.’s (0/13) (13) reports. The high proportion may be explained by the fact that our centre is the largest gastrointestinal specialist hospital in China, and surgeons have extensive experience; therefore, more difficult patients are sent here for treatment.

The posterior approach has been reported to have low morbidity and good oncological outcomes (20,21), but the TSC approach is still controversial because of complications such as leakage, wound infection and poor wound healing. Other debated factors include surgical indication, the procedures, and operability. In our centre, the average operation time was 130.2±47.4 min, which indirectly reflects the feasibility of surgery. In this study, 7 of the 17 patients had different degrees of complications, including 5 cases of leakage and 2 cases of poor wound healing. The high incidence rate of complications may be attributed to the specific location of the tumour, the ages of the patients, experience of the surgeon, and the complexity of the cases. Of the 7 patients with complications 6 had a rectal GIST located at the lateral or anterior wall of the rectum. Case 1 and Case 6 in this study underwent a second tumour excision operation due to recurrence, and a second operation may increase the difficulty of the operation. In addition, the average age and blood loss of patients with complications (58.6 years and 51.4 mL, respectively) were higher than those of patients without complications (54.0 years and 39.3 mL, respectively). Complications also lead to postoperative hospitalisation. Fortunately, all patients obtained a good survival prognosis. Therefore, methods to reduce the incidence of complications should be examined. To reduce the incidence of leakage, a leak test with methylene blue or water is important to ensure the absence of leak. Optimisation of suture techniques, prophylactic ileostomy and postoperative nursing could reduce the incidence of leakage and other serious complications.

The standard treatment for resectable rectal GIST is complete surgical resection without dissection of clinically negative lymph nodes (7). Pre-treatment with imatinib should be considered if R0 resection is not feasible, or it can be achieved by less invasive/functionally preserving surgery in the case of reduced tumour size. For unresectable or metastatic rectal GISTs, imatinib is the primary therapy; Surgery may be indicated for limited disease progression, previously unresectable tumours after a favorable response to preoperative imatinib or symptomatic bleeding or obstruction (6).

However, the indications for resection of rectal GISTs by the TSC approach still need to be mastered, and tumour size, location, and surrounding invasion need to be comprehensively considered. Because the size of the tumour is closely related to the risk of recurrence and the choice of surgical approach (24), local resection is feasible for most patients with small tumours (diameter <5 cm) (25). For tumours in the lower rectum, transanal resection is safe and feasible as long as a safe cutting margin of 1 cm can be guaranteed. For women with tumours in the middle of the anterior wall of the rectum, transvaginal resection may be considered. For tumours located in the posterior wall of the middle segment of the rectum, especially tumours growing away from the rectal lumen, the TSC approach is the best choice. For stromal tumours in the upper segment of the rectum, transabdominal tumour resection is suitable. According to our data, the sum of the preoperative tumour diameter and the distance from the tumour to the anal verge ranged from 3.6 to 11 cm, and there were 6, 2 and 9 cases located in the anterior, posterior and lateral walls of the rectum, respectively. This suggests that the TSC approach is more appropriate when the tumour is located at the middle and lower rectum. It is worth mentioning that the presence of a tumour in the anterior wall of the rectum is not a contraindication to this procedure. We recommend the TSC approach for resection of intramural or exogenous rectal GISTs in the middle and lower rectum. Since this approach is rarely used, it should be carried out in centres with rich professional experience based on individualized treatment.

In addition, for patients diagnosed with rectal GIST, imatinib neoadjuvant therapy is feasible, and surgery can be performed when the tumour cannot shrink further. The incidence of rectal stromal tumours is low, and the degree of risk is usually high. Neoadjuvant imatinib therapy for rectal GISTs offers a number of potential benefits (26), including tumour downsizing, reduction in mitotic activity, reduced morbidity, and a reduced risk of recurrence (27) Patients with intermediate or high risk should continue to use imatinib 400 mg/day as adjunctive therapy after surgery for at least 3 years. In this study, differences were noted in tumour diameter between before and after treatment with imatinib, which significantly reduced the mean tumour size from 6.4 (2.6–8.6) to 4.2 (2.0–6.8) cm (95% confidence interval, P<0.05).

Given the long latency period between the primary surgical intervention and recurrence and/or metastasis, regular follow-up at 3–6-month intervals in the first 3 postoperative years is highly recommended, especially for patients with intermediate and high-risk rectal GISTs. Close surveillance also allows for the early discovery of local recurrence after local excision. Case 1 and Case 6 in this study underwent surgery at local hospitals and then re-presented to us due to recurrence. To date, they have exhibited recurrence-free survival after the second surgery.

Finally, the study was limited by its small sample size and retrospective design, but this technique is an alternative to consider in selected cases of rectal tumours.

The authors thank Tianzuo Niu for the valuable data collection.

Funding: This work was supported by the Guangzhou Science and Technology Project (201704020059).

Reporting Checklist: The authors have completed the STROBE reporting checklist. Available at http://dx.doi.org/10.21037/atm-20-8204

Conflicts of Interest: All authors have completed the ICMJE uniform disclosure form (available at http://dx.doi.org/10.21037/atm-20-8204). The authors have no conflicts of interest to declare.

Ethical Statement: The authors are accountable for all aspects of the work in ensuring that questions related to the accuracy or integrity of any part of the work are appropriately investigated and resolved. All procedures performed in this study involving human participants were in accordance with the Declaration of Helsinki (as revised in 2013). This study was approved by the Research Ethics Committee of the Sixth Affiliated Hospital of Sun Yat-sen University, Guangzhou, China (No. 2018ZSLYEC-099), and all patients provided informed consent for participation.