Elevated resting heart rate (HR) has been widely associated with mortality across a broad spectrum of diseases (1-3). Circadian rhythms, which drive the sleep-wake cycle, are involved in the physiological process of HR variation to adapt to the external environment (4). Except sleep-wake cycle, demographic factors, such as age and sex, and lifestyles, such as physical activity, alcohol and smoking, were also showed to be involved in the physiological process of HR variation (5). Recently, HR variability has been the focus of increased attention. In particular, decreased HR variability, which is associated with impaired automatic nervous function, has been shown to predict the risk of cardiovascular and all-cause mortality in community-based populations (6,7). In the intensive care unit (ICU), the circadian rhythms of critically ill patients are more easily disrupted by altered light-dark cycles and a different external environment (8). HR fluctuation between the maximum and minimum HR in a 24-hour period is an accessible marker representing circadian changes in HR. In the ICU, it was reported that several heart rate dynamics, including mean HR and its fluctuation, could be used to predict transfusion requirement (9). While the association between HR fluctuation and mortality in the ICU remains unknown. Several circadian variation factors, such as blood pressure and blood glucose level, were demonstrated to be associated with mortality (10,11). Thus, we hypothesized that disrupted HR fluctuation, as one of the accessible circadian variation factors, may also have predictive value for prognosis in ICU patients.

A U-shaped relationship between higher mortality and both high HR and low HR was reported in a hypertensive cohort, indicating that HR above or below a suitable level may suggest poor prognosis (12). Adequate HR control has been shown to be a beneficial treatment for fast HR disorders (13). However, unlike mean HR control, evidence for recommendations to control HR fluctuation to a target range remains limited.

In this study, we aimed to elucidate the association between HR fluctuation and risk of mortality, as well as the appropriate HR fluctuation target with lowest risk of death in the ICU. We designed and conducted this retrospective cohort study by using multivariate Cox proportional hazards regression modeling and restricted cubic spline modeling based on the Medical Information Mart for Intensive Care (MIMIC-III) database. Briefly, MIMIC-III is a large, public, and free database comprising deidentified health-related records associated with more than 30,000 patients who stayed in ICU of the Beth Israel Deaconess Medical Center between 2001 and 2012 (14). Based on the MIMIC-III database, a diverse range of analytic studies spanning epidemiology, clinical decision improvement, and electronic tool development were carried out. Our study may be helpful for providing novel evidence to optimize HR control strategies.

We present the following article in accordance with the STROBE reporting checklist (available at http://dx.doi.org/10.21037/atm-20-7897).

The data for this retrospective cohort study were extracted from the MIMIC-III database. The MIMIC-III database consists of comprehensive and de-identified clinical data from 53,423 distinct ICU stays for 38,597 adult patients during the period of 2001 to 2012. A relational database was established with demographic data, laboratory tests, discharge summaries, electrocardiography, imaging examinations, diagnostic information such as the International Classification of Diseases, Ninth Revision (ICD-9) codes, and in-hospital and out-of-hospital mortality. The use of the MIMIC-III database was approved by the review boards of the Massachusetts Institute of Technology and Beth Israel Deaconess Medical Center (14). The study was conducted in accordance with the Declaration of Helsinki (as revised in 2013). 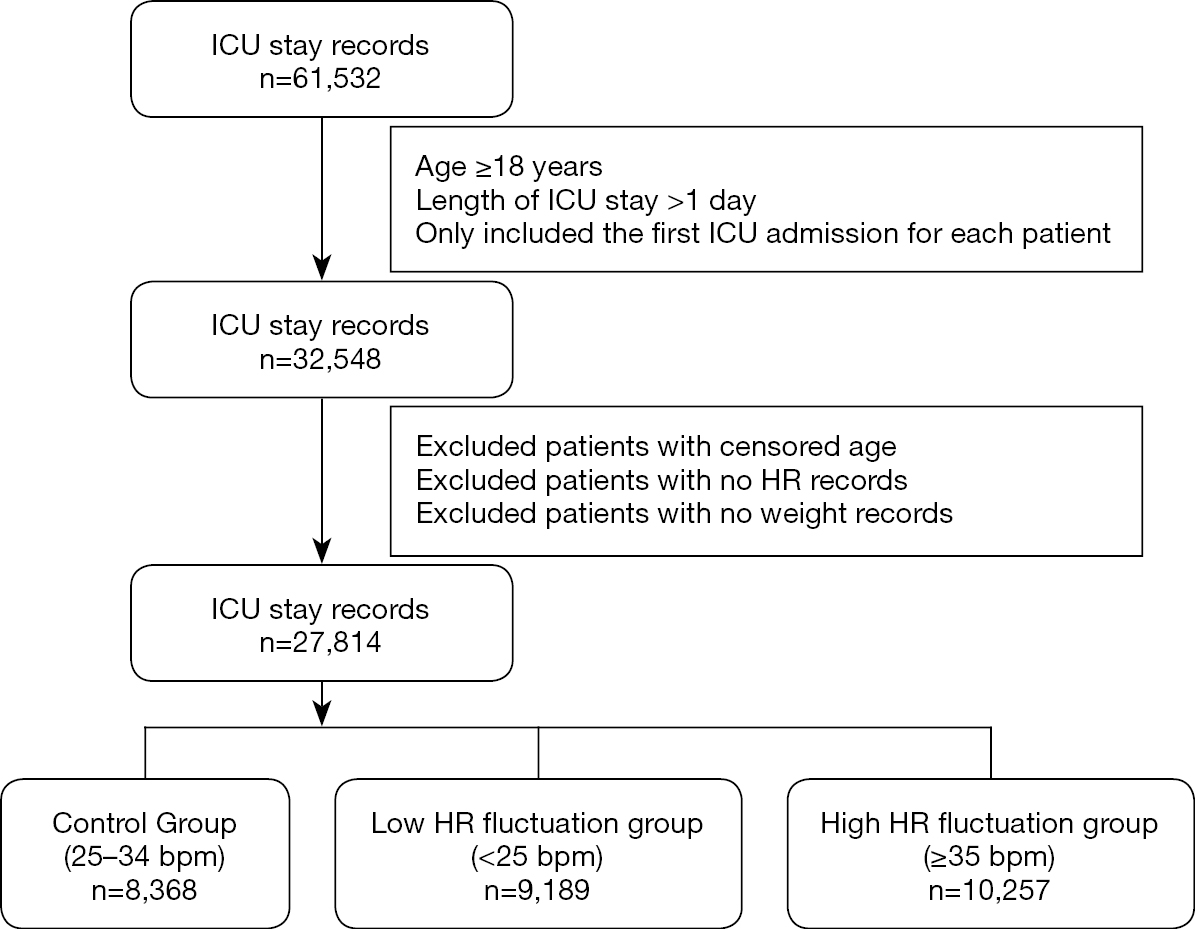 HR was measured at least once per hour for each subject. HR fluctuation was calculated as the maximum HR minus the minimum HR in the initial 24 hours. According to the level of HR fluctuation, participants were divided into 3 groups: low HR fluctuation [<25 beats per minute (bpm)], control group (25–34 bpm), and high HR fluctuation (≥35 bpm). In the baseline characteristics analysis and Cox regression analysis, these cut-off values of HR were designed to guarantee that each group shared a relatively equal sample size. And in nonlinear association analysis, the target value of HR with lowest risk of mortality was evaluated by restricted cubic spline model. In this study, 28-day mortality and 1-year mortality were defined as the outcome events, which were also available in the MIMIC-III database.

Normally distributed continuous variables are presented as the mean ± standard deviation, while non-normally distributed data are presented as the median [interquartile range (IQR)]. Differences among continuous variables were tested using analysis of variance or the rank-sum test, as appropriate. Categorical variables are presented as a number (percentage) and were tested by the chi-square test. Cox regression models with backward process were used to investigate the association between HR fluctuation and outcomes. Adjusted variables included age, male sex, weight, SAPS score, SOFA score, mean HR, ventilation, vasopressors, sedatives, arrhythmias, CHF, hypertension, diabetes, renal failure, and liver disease. Hazard ratios and 95% confidence intervals (CI) for the high and low HR fluctuation groups were calculated and compared with the control group. An adjusted model using restricted cubic spline with 5 knots was constructed to flexibly represent the association between the risk of mortality and HR fluctuation as a continuous variable (17). Further sensitivity analyses were conducted to evaluate the influence of different mean HR or comorbidities on our results. 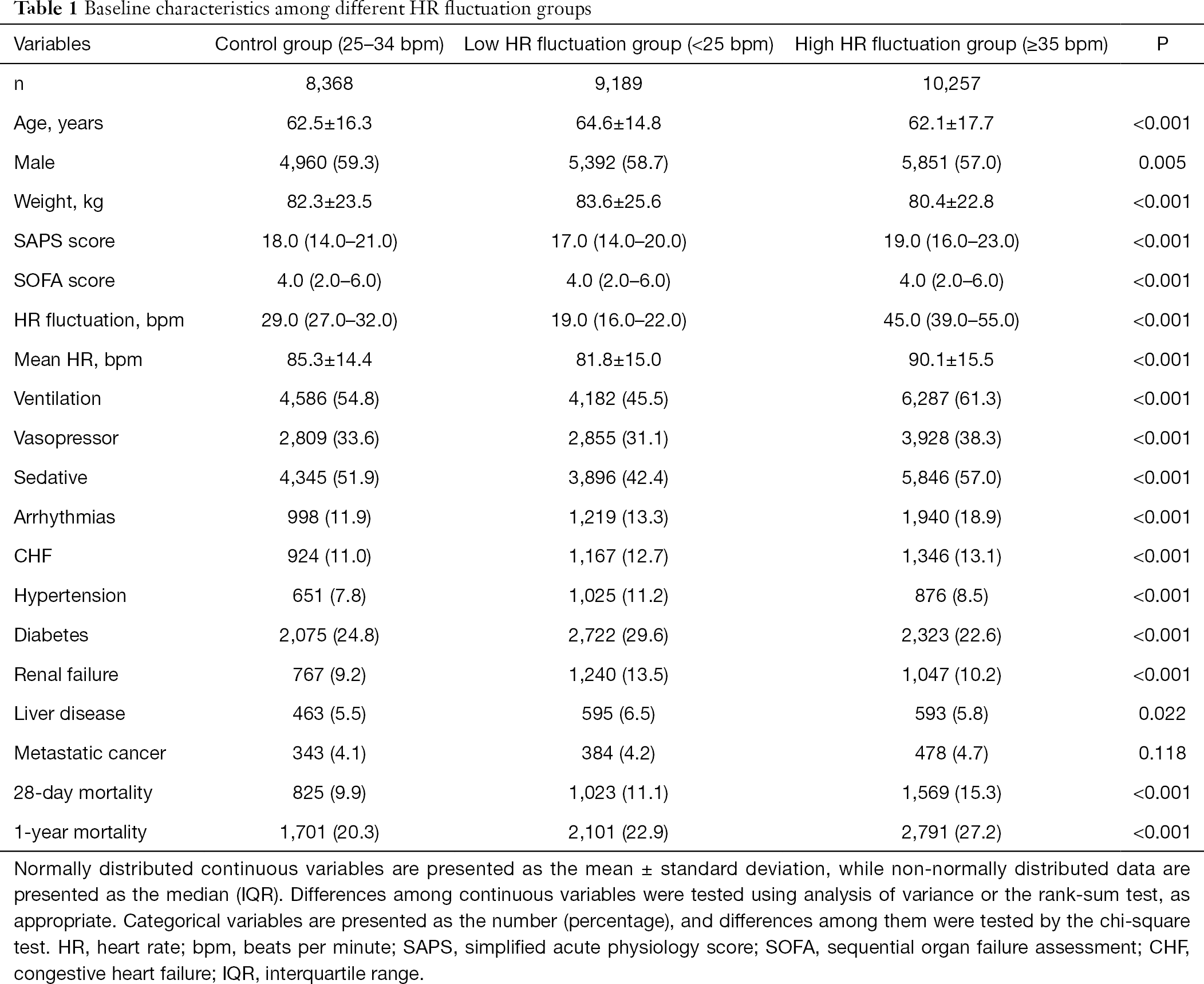 Association between HR fluctuation and mortality 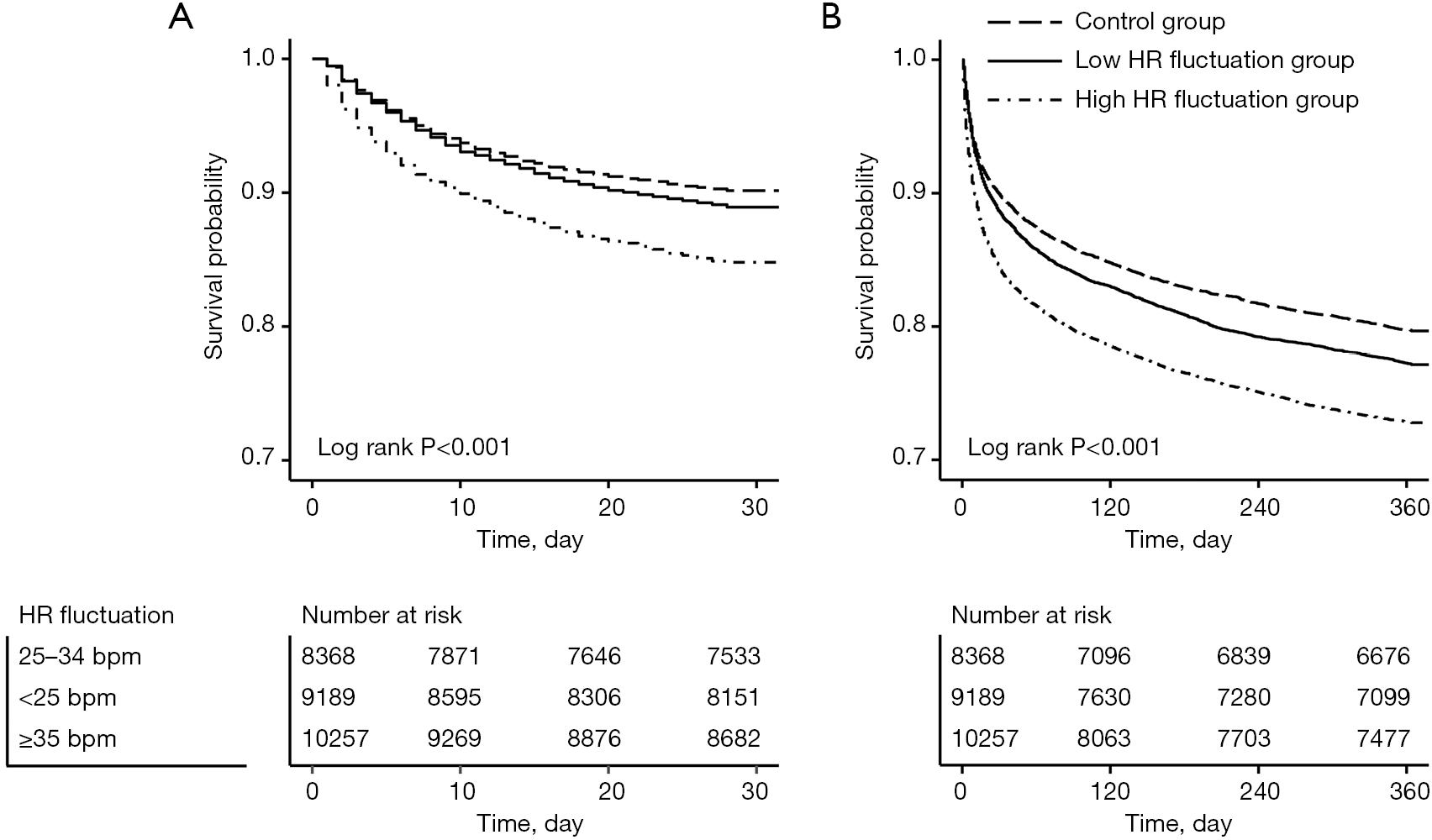 Moreover, a typical U-type curve was also observed in restricted cubic splines, representing a nonlinear association between HR fluctuation and 28-day and 1-year mortality, with an HR fluctuation of 30 bpm conveying the lowest risk (Figure 3). 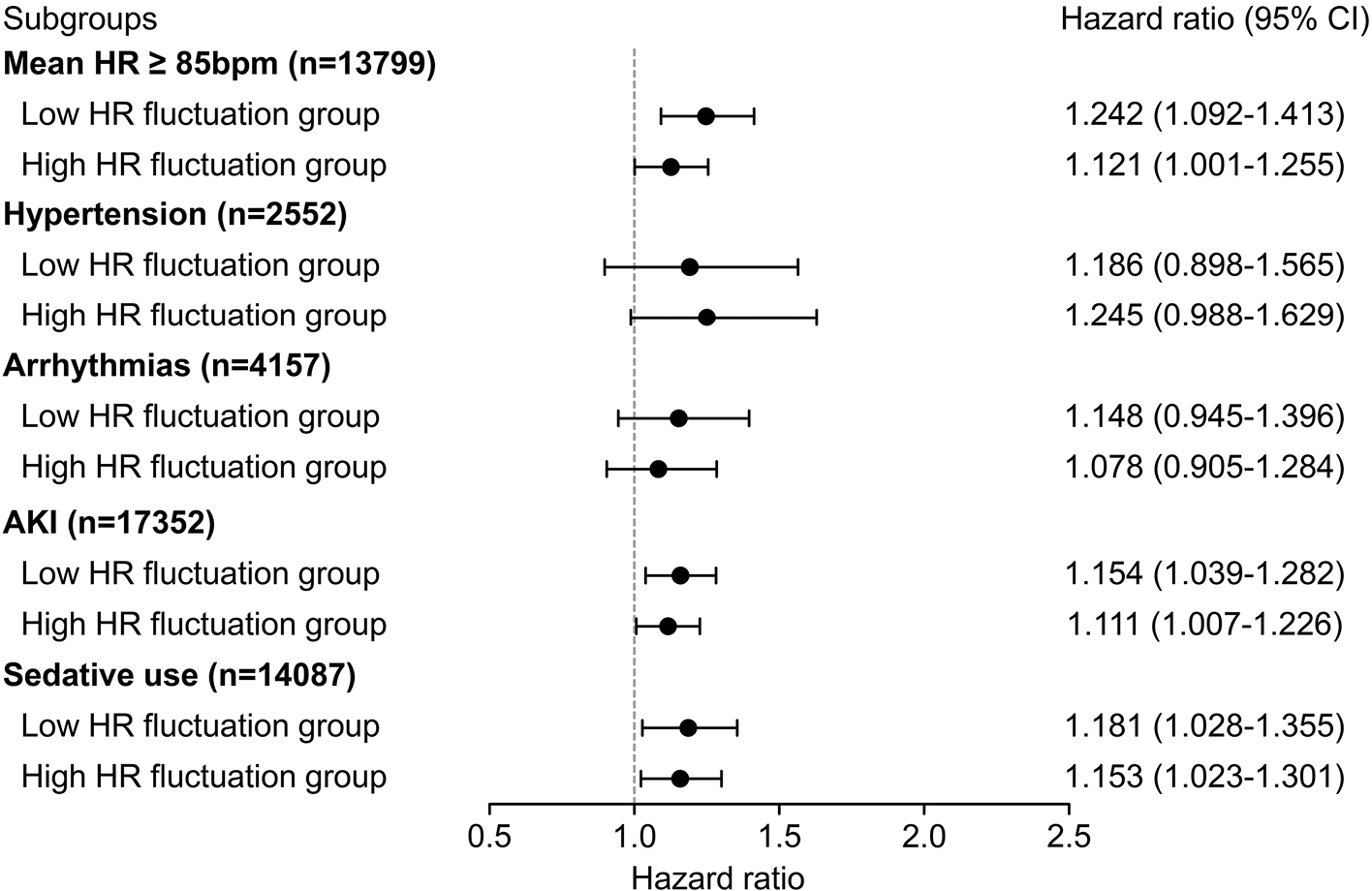 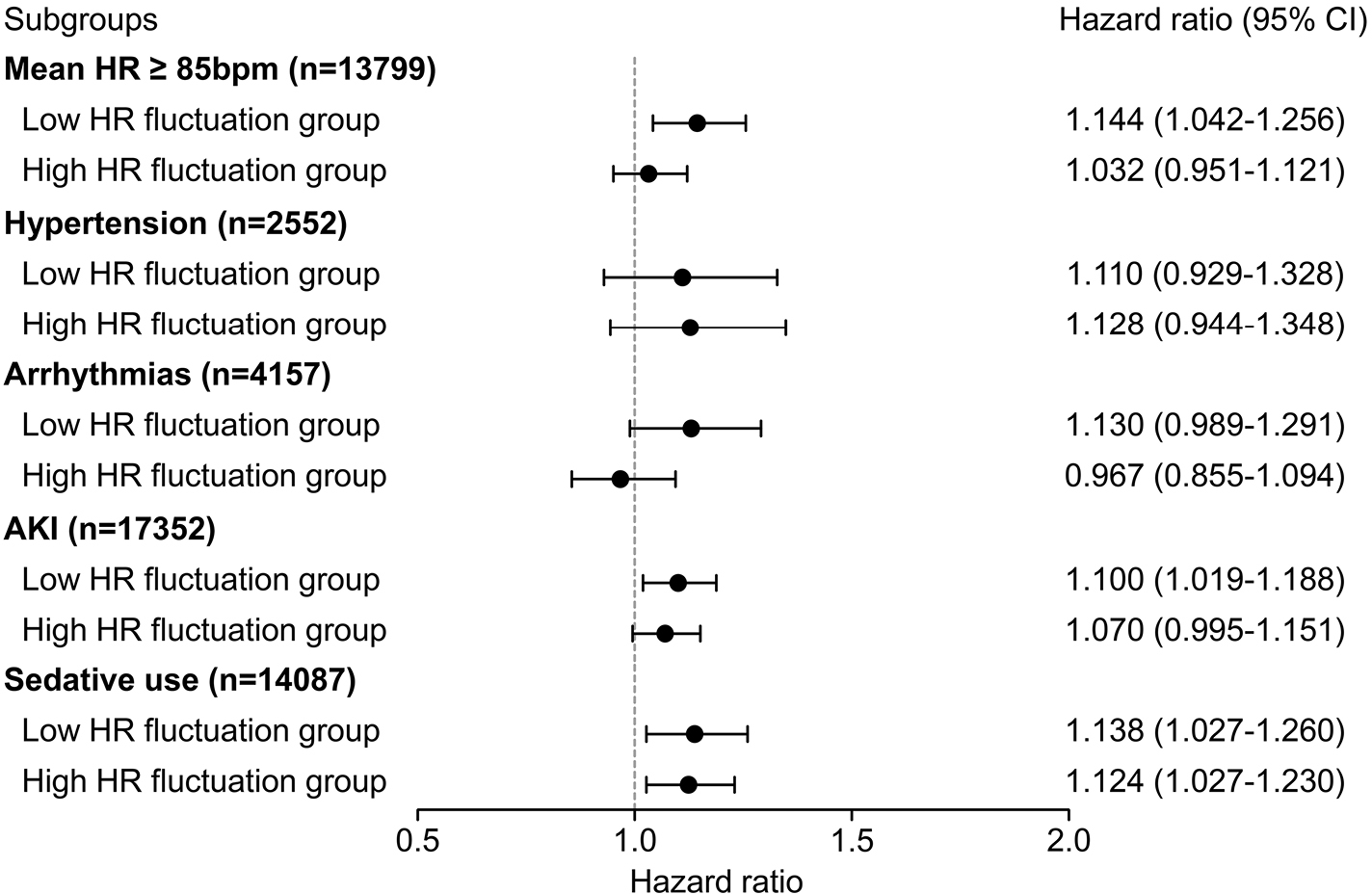 Previous cohort studies have concluded that increased mean HR upon admission was independently associated with elevated all-cause mortality and in-hospital mortality in the general population and among patients with acute coronary syndrome (3,22). Furthermore, beat-to-beat HR variability can also predict sudden cardiac death and all-cause mortality (23-25). The risk of cardiac mortality for a low standard deviation of normal-to-normal RR intervals was significantly elevated in both young adults and the elderly (24). Usual leisure activities and walking helped improve specific HR variability indices, indicating enhanced autonomic function in older adults, including normalized circadian fluctuations (26). Combined with our results, these findings stress that appropriate HR fluctuation should be fully considered in HR control strategies for ICU patients for better prognosis. Due to the high risk of mortality for patients with high HR fluctuation, active treatment of primary disease was well warranted. Besides, close vital sign monitoring and strategies for choosing different times of the day at which to perform some medical procedures or drugs might also be beneficial to these patients (27).

Increased resting HR has been widely validated to be linearly associated with a higher risk of all-cause mortality in the general population and among patients with hypertension (28-30). Interestingly, a U-type curve was fitted by restricted cubic splines in our study, which revealed a nonlinear association between HR fluctuation and the risk of 28-day or 1-year mortality, with the lowest risk at an HR fluctuation of 30 bpm. Current HR control is effective in the treatment of fast HR disorders, including atrial fibrillation and CHF, with an appropriate HR target of approximately 80 bpm for minimizing the risk of cardiovascular events (13,31,32). Our results provide a critical point for optimizing HR control by targeting 30 bpm for proper HR fluctuation control, which could be helpful to maintain stable HR circadian rhythms and reduce the risk of all-cause mortality in critically ill patients.

There were some limitations to this study. First, since this was a real-world data-based retrospective study in which different intervals between HR monitoring measurements for each patient might have existed, we calculated the HR fluctuation between the maximum and minimum HR across the initial 24 hours, with further adjustment for multiple covariates in the regression models to reduce their potential impact on the risk of mortality. Second, there was inevitable selection bias from the retrospective study design. Thus, future external validation will help enhance the credibility of our results. Third, sensitivity analyses showed that the association between HR fluctuation and mortality was impaired in the subgroup with hypertension or arrhythmia. These results might be due to the small sample sizes of these subgroups, as well as the HR-limiting therapy in these patients, which could influence the level of HR fluctuation.

In conclusion, this retrospective cohort study revealed an independent association between HR fluctuation and 28-day and 1-year mortality in ICU patients, with the lowest risk associated with an HR fluctuation of 30 bpm. HR fluctuation might be an accessible and reliable predictor for the risk of mortality in critically ill patients, which should be considered and further validated in future studies on HR control strategies.

We would like to thank the participants, developers and investigators associated with the Medical Information Mart for Intensive Care (MIMIC)-III database.

Reporting Checklist: The authors have completed the STROBE reporting checklist. Available at http://dx.doi.org/10.21037/atm-20-7897

Conflicts of Interest: All authors have completed the ICMJE uniform disclosure form (available at http://dx.doi.org/10.21037/atm-20-7897). The authors have no conflicts of interest to declare.

Ethical Statement: The authors are accountable for all aspects of the work in ensuring that questions related to the accuracy or integrity of any part of the work are appropriately investigated and resolved. The application of the MIMIC-III database was approved by the review boards of the Massachusetts Institute of Technology and Beth Israel Deaconess Medical Center. The study was conducted in accordance with the Declaration of Helsinki (as revised in 2013).