Primary immune thrombocytopenia (ITP) is an autoimmune-mediated acquired bleeding disorder, defined as a platelet count less than 100×109/L without other causes of isolated thrombocytopenia (1,2). The etiology of ITP is complex and heterogeneous, and as no specific biomarkers are indicating its presence, ITP remains a diagnosis of exclusion. The heterogeneous nature of ITP is evident in the differences in clinical presentation and response to regular treatment among patients and the multiple mechanisms that have been forwarded to account for it, such as autoantibodies, T cell dysregulation, and impaired megakaryocytes (1,2). Except primary ITP, all forms of immune-mediated thrombocytopenias is defined as secondary ITP. Secondary ITP has several causes, including autoimmune diseases such as systemic lupus erythematosus (SLE).

SLE is a complex autoimmune disease and is usually associated with hematological abnormality (3), including thrombocytopenia, the prevalence of which in SLE patients has been reported to be 7–30% (4). Conversely, the prevalence of SLE in all ITP cases in adults is approximately 5%, making SLE the most common cause of secondary ITP (5). In the early stages, when there are only thrombocytopenia symptoms, it is sometimes difficult to determine what form of ITP is present in patients with SLE. SLE-associated thrombocytopenia (SLE-TP) is defined as a platelet count less than 100×109/L in the absence of any other identifiable cause (6). The pathogenesis of thrombocytopenia in SLE is heterogeneous and multifactorial. However, it is widely accepted that an increased platelet clearance mediated by autoantibodies against platelets contributes to the pathogenesis, which is analogous to the mechanism of ITP. Differing from primary ITP, the clinical treatment for thrombocytopenia secondary to an identifiable cause is often targeted to the ongoing disorder. However, there are no specific biomarkers to differentiate SLE-TP from ITP (7-9).

The blocking of IL-1, particularly of IL-1β, has recently become the standard therapy for autoinflammatory diseases (16,17). Moreover, IL-1β, a driver of tumor-promoting inflammation in cancer, can be targeted in patients using an IL-1 receptor antagonist acting as a checkpoint inhibitor (18,19). Several studies have suggested abnormal changes in IL-18, and IL-18-binding protein (IL-18BP) were involved in the pathogenesis of SLE and ITP (20-23). Furthermore, recent studies demonstrate that IL-1 may also take part in inflammatory pathologies and auto-immune diseases by participating in the development of T-helper 17 (Th17) cells (24,25), and increased numbers of Th17 cells have been reported in patients with SLE and ITP. We hypothesize that IL-1 family cytokines could be involved in the pathogenesis of ITP and/or SLE because of their role in inflammation and autoimmune diseases. In the present study, we aimed to evaluate IL-1 family cytokines’ expression in patients with either ITP, SLE-TP, or those with SLE without thrombocytopenia (SLE-NTP), which might help to differentiate patients with SLE-TP from those with ITP. We present the following article following the MDAR reporting checklist (available at http://dx.doi.org/10.21037/atm-20-4729).

The analysis was performed with SPSS 19.0 and GraphPad Prism 5.0 for Windows. For statistical analysis, the levels of cytokines below the detection limits (Table S1) were arbitrarily assigned the values corresponding to the minimum limits. Data were expressed as mean ± SD and median (interquartile range). Differences in percentages were evaluated using chi-square analysis or Fisher’s exact tests. Differences among the groups in measured values were analyzed using the one-way ANOVA with the least significant difference test for post-hoc multiple comparisons, Kruskal-Wallis test, and Mann-Whitney U test as appropriate. The bleeding scale of patients was calculated by the sum of age scale and bleeding manifestation scale (26). P values less than 0.05 were considered statistically significant.

To understand the serum IL-1 cytokines profile in ITP, SLE-TP, and SLE-NTP patients, 11 cytokines including IL-1α, IL-1β, IL-1Ra, IL-18, IL-36Ra, IL-36α, IL-37, IL-36β, IL-36γ, IL-38, and IL-33 were analyzed (Table 2). While the majority of IL-1α levels were below the detection limits of the assay (data not shown), as shown in Figure 1, the secretion of serum IL-1β, IL-18, IL-36α, IL-36β, IL-36γ, and IL-33 were significantly decreased in primary ITP patients compared to SLE-TP, SLE-NTP patients. However, there were no significant differences between the SLE-NTP patients and SLE-TP patients/healthy controls (P>0.05), and except for IL-33, there were no significant differences between the SLE-TP patients and healthy controls. 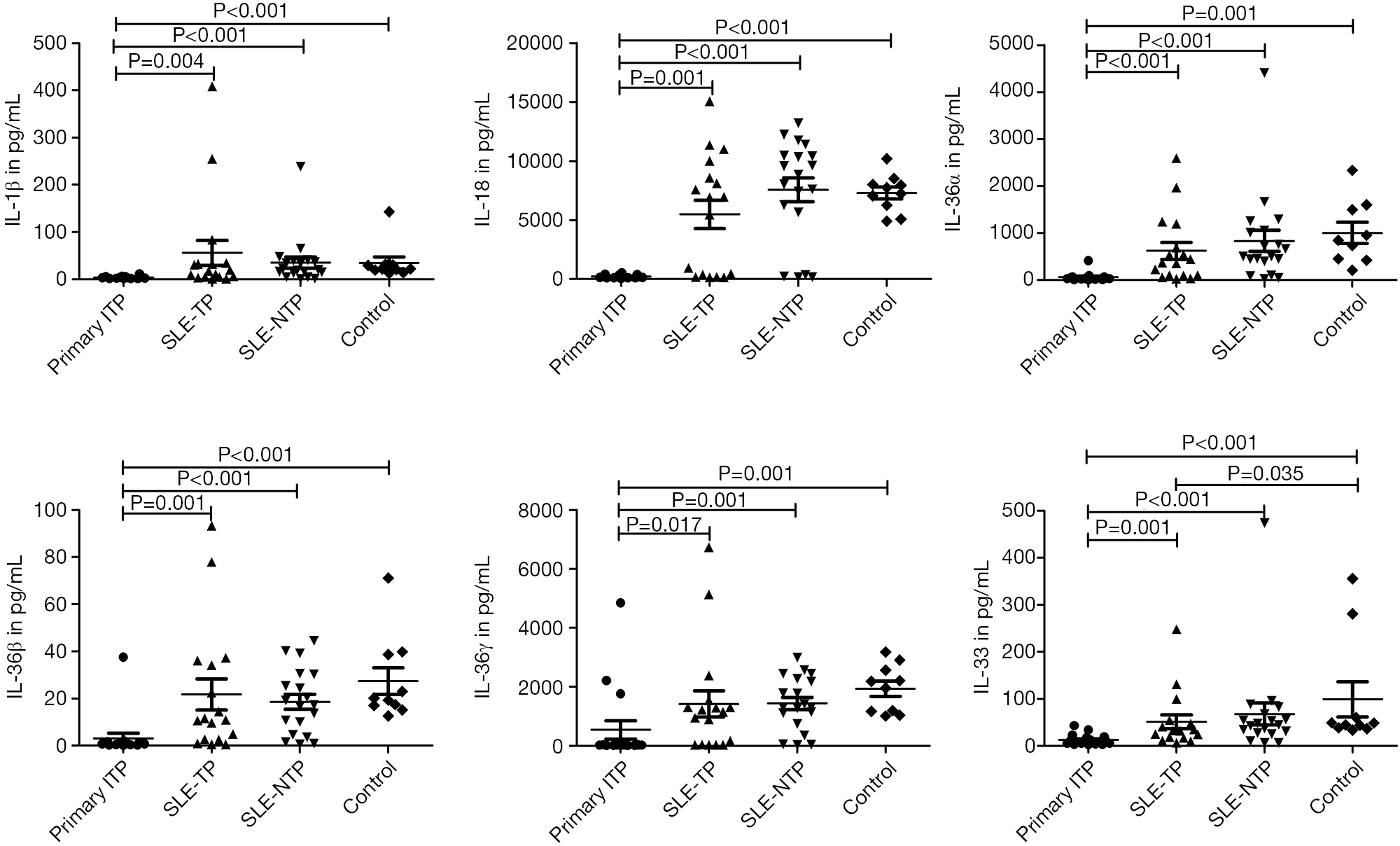 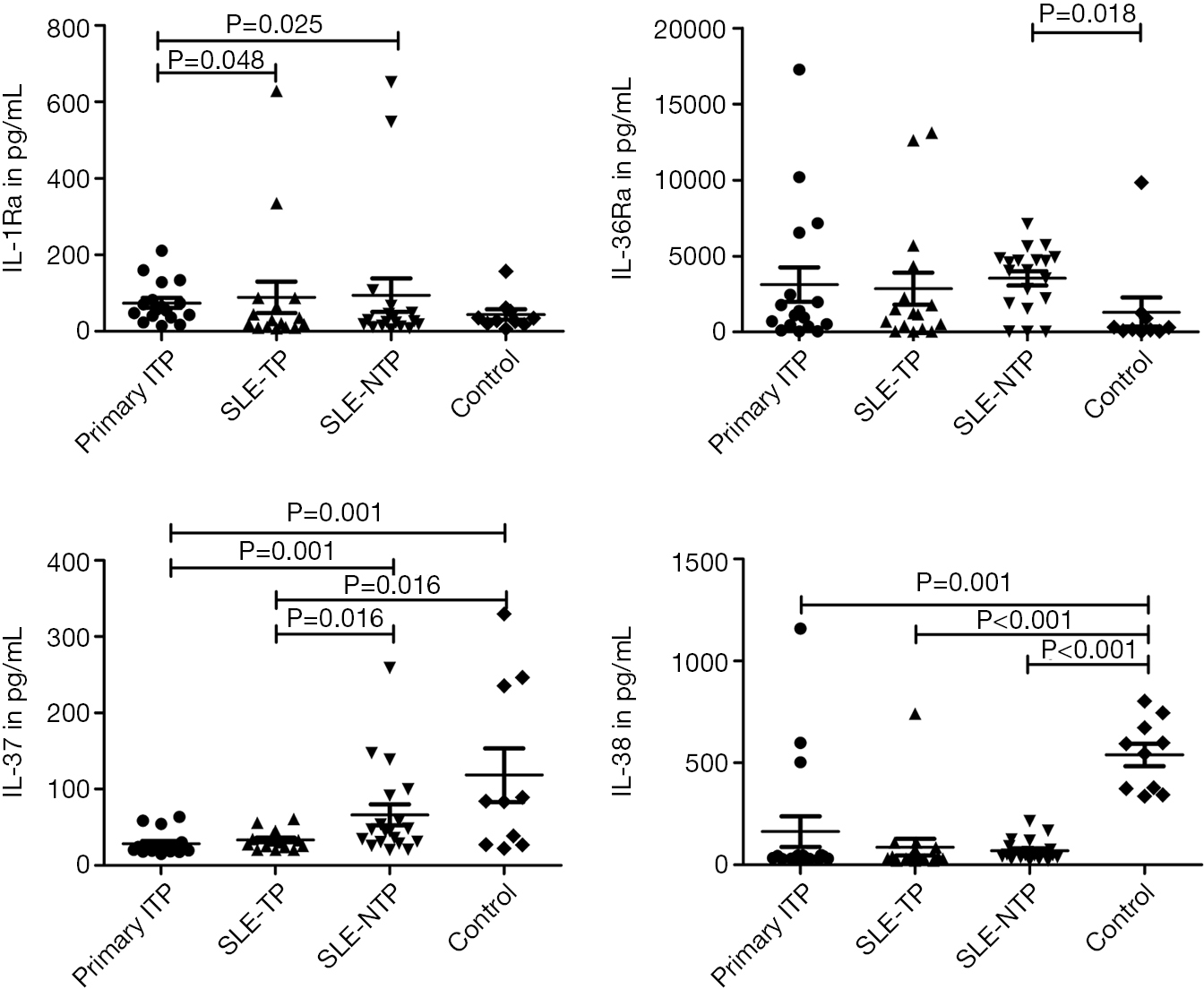 The secretion of serum IL-37 and IL-36α correlated positively to platelet count in primary ITP and SLE-NTP patients, respectively 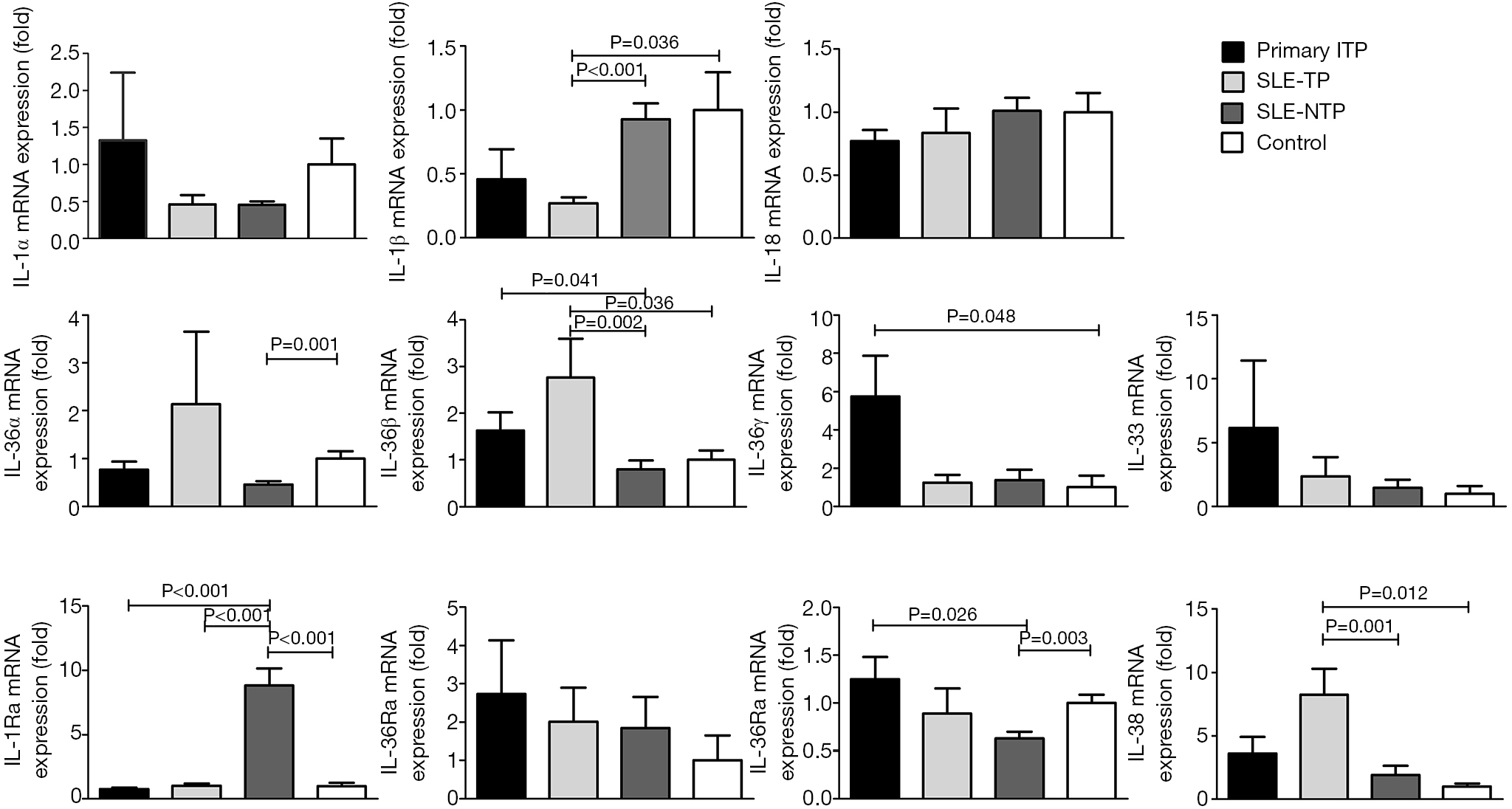 ITP is an autoimmune disease characterized by abnormal cell immunity (27), and abnormal cytokines play an important role in its pathogenesis. The role of IL-1 family cytokines in the development of autoinflammatory and autoimmune diseases has gained extra attention because of their potential therapeutic targets. While IL-1 gene polymorphisms have been reported to be associated with ITP and SLE (28-31), few studies investigate IL-1 cytokines expression in thrombocytopenia, and the majority of these significant cytokines have not been identified in ITP and SLE. Increasing evidence suggests that an imbalance of immune regulation mechanisms, such as Th1/Th2 imbalance, Treg/Th17 imbalance, pro-inflammatory cytokines, and anti-inflammatory cytokines imbalance, contributes to the maintenance of immune homeostasis (32,33). Increased numbers of Th17 cells have been reported in both ITP and SLE. Moreover, IL-1 may participate in the development of Th17 cells (24,25). Intriguingly, we observed a down-regulation of IL-1β, IL-18, IL-36α, IL-36β, IL-36γ, IL-33, IL-37, and IL-38 in ITP patients compared to healthy controls. However, Shan et al. (23) have reported that the serum level of IL-18 was significantly increased in ITP patients. The level of IL-33 in serum in our study was significantly down-regulated in ITP patients, which is following previous reports (34). IL-18 is best known for its role in Th1 immune responses, whereas IL-33 has been strongly associated with Th2 responses. All these findings support the hypothesis that IL-1 cytokines participate in the pathogenesis of ITP. Li et al. (34) also found that IL-33 mRNA expression did not differ in ITP patients than in healthy controls. In our study, not only IL-33 mRNA, but also IL-1α, IL-1β, IL-1Ra, IL-18, IL-36Ra, IL-36α, IL-36β, IL-37, and IL-38 mRNA expression showed no significant differences in ITP patients compared to healthy controls. Our findings also indicate that no genetic variants exist in the IL-1α, IL-1β, IL-1Ra, IL-18, IL-36Ra, IL-36α, IL-36β, IL-37, IL-33, and IL-38 gene in ITP patients.

The derangement of immune regulation also contributes to SLE, and many studies have reported the role of IL-1 cytokines in SLE (35-38). Italiani (35) and Mende (36) found that serum IL-18 was higher in SLE than the healthy controls, although this was not seen in our study. Decreased serum IL-36Ra and increased serum IL-36α, IL-36γ, and IL-37 have been reported in SLE patients (37,38), which, too, does not follow our results. Different detection methods and patient grouping may have led to these disparate test results. We first detected IL-1 cytokines in ITP, SLE-TP, and SLE-NTP patients. While antibodies cause both ITP and SLE-TP against platelets, the mechanism which differentiates these conditions is unknown. Differences in the peripheral blood absolute lymphocyte count and neutrophil count of ITP and SLE-TP patients in our study suggests a different cellular immunity. The assessment of IL-1 cytokines in ITP patients in comparison with those with SLE-TP and SLE-NTP showed that the levels of IL-1β, IL-18, IL-36α, IL-36β, IL-36γ, and IL-33 were significantly lower in ITP patients than SLE-TP and SLE-NTP patients. However, there were no significant differences in the levels of IL-1β, IL-18, IL-36α, IL-36β, and IL-36γ among SLE-TP and SLE-NTP patients and healthy controls. All data revealed several differences in the immunopathogenesis between ITP and SLE-TP/SLE-NTP patients. These findings indicate that IL-1β, IL-18, IL-36α, IL-36β, IL-36γ, and IL-33 are involved in the pathogenesis of ITP but not SLE, including SLE-TP and SLE-NTP. Although there was no significant difference in the level of serum IL-37 between ITP and SLE-TP patients, a significant positive correlation was found between IL-37 and platelet count in ITP patients. Serum IL-1β, IL-18, IL-36α, IL-36β, IL-36γ, and IL-33 could be considered potential biomarkers that discriminate between ITP and SLE-TP patients.

In conclusion, the present study indicates that parts of the IL-1 cytokines, such as serum IL-1β, IL-18, IL-36α, IL-36β, IL-36γ, IL-33, and IL-37, are involved in the pathogenesis of ITP. The protein levels of IL-1β, IL-18, IL-36α, IL-36β, IL-36γ, and IL-33 rather than mRNA levels could be considered as the biomarkers to differentiate SLE-TP from ITP patients. Further investigation of the role of IL-1 cytokines in autoimmune and autoinflammation function is warranted.

This study was conducted at the Institute of Clinical Science of Zhongshan Hospital, Fudan University. We sincerely thank all the staff and participants for their important contributions.

Reporting Checklist: The authors have completed the MDAR reporting checklist. Available at http://dx.doi.org/10.21037/atm-20-4729

Conflicts of Interest: All authors have completed the ICMJE uniform disclosure form (available at http://dx.doi.org/10.21037/atm-20-4729). The authors have no conflicts of interest to declare.

Ethical Statement: The authors are accountable for all aspects of the work in ensuring that questions related to the accuracy or integrity of any part of the work are appropriately investigated and resolved. The study was in accordance with the ethical standards formulated in the Helsinki Declaration (as revised in 2013) and was approved by the respective local Medical Ethics Committees of Zhongshan Hospital of Fudan University (approval No. B2013-003R). Written informed consent was obtained from each patient before their being included in the study.