Although the use of a standard endoscope and endoscopic biopsy is the gold standard for the diagnosis of gastrointestinal cancer, the application of gastroscopy and coloscopy in the screening, investigation, and monitoring of lesions is limited due to the technical requirements and the unpleasant intubation experience (4-6). The use of anesthesia improves patient acceptance, but it is associated with contraindications and risks of adverse events. Therefore, a painless capsule endoscopy method for detecting gastrointestinal lesions would be particularly beneficial (7,8).

Various types of capsule endoscopy are currently available, and these methods represent first-line diagnostic tools for the detection of small intestinal diseases (9-13). With the development of new techniques and ideas, the indications for capsule endoscopy have been extended to range from the small intestine to the colon. The development of a capsule system for examining the upper gastrointestinal duct has also been a hot topic globally. Rey et al. presented the first application of a magnetically navigated capsule in the human stomach (14). In addition, other gastric capsule endoscopy tools, including hand-held MCCG, MRI-based MCCG, robotic MCCG (7,15-18), and PillCamESO, have been developed for examination of the esophagus and stomach (19).

The properties of the PillCamColon2, which was designed for colon examination, provide an opportunity to test its feasibility in complete gastrointestinal imaging. The second-generation colon capsule, known as PillCamColon2, measures 31.5 mm by 11.6 mm and has two imagers that are separately located at each end of the capsule to view the colonic mucosa. The angle of view from each imager was increased from the 156° angle of the first-generation colon capsule to 172°. This improvement allows for a viewing coverage of approximately 360° (20). It also has an adaptive frame rate function that senses the movement speed of the capsule endoscope, and it captures 4 to 35 images per second to image the mucosa adequately (20). Many studies have suggested that this device is an adequate tool for colorectal imaging (20-23).

Research on the additional potential of the PillCamColon2 system for observing the esophagus and the stomach is limited. In this study, we visualized esophageal and gastric landmarks using this capsule to evaluate the feasibility of applying this method in the upper gastrointestinal tract. We also viewed the images produced by the two imagers to evaluate their characteristics and advantages.

We present the following article in accordance with the STROBE reporting checklist (available at http://dx.doi.org/10.21037/atm-20-3699).

Similar to other PillCam systems, the current system consists of an ingestible video capsule that moves through the gastrointestinal tract via the natural effects of peristalsis while transmitting images via an antenna-lead array to a data-recording device that is carried by the patient. The recorded images are transferred to a workstation that is loaded with RAPID software. The new colon capsule measures 31.5 mm by 11.6 mm and has two imagers that are separately located at each end of the capsule to view the colonic mucosa. The angle of view from each imager was increased from the 156° angle of the first-generation colon capsule to 172°. This improvement allows for approximately 360° coverage of the colon. To view more mucosa and save battery energy, this capsule is equipped with an adaptive frame rate. The device captures 35 images per second when in motion and 4 images per second when in a static state.

We performed a retrospective study. The study was performed in accordance with the Declaration of Helsinki (as revised in 2013). The Ethics Committee of Tongji Medical College, Huazhong University of Science and Technology (Wuhan, China) approved this study (2017-S313). All personally identifying information was omitted. A total of 127 patients underwent PillCamColon2 examinations in our outpatient department from January 2018 through January 2019. The chief complaints of the patients included lower gastrointestinal symptoms (but not upper gastrointestinal symptoms), including abdominal pain, diarrhea, and changes in the characteristics of the stool, whereas some of the healthy subjects came for a physical examination. The exclusion criteria were dysphagia or any swallowing disorder, life-threatening conditions, current pregnancy, or contraindications for bowel preparation or the prokinetic agents used in the study. We re-read the images of the 127 patients and separately recorded the results of the two imagers at each end of the PillCamColon2.

Patients swallowed the capsules in the left lateral position, which allowed for the esophagus to be viewed. Patients were then asked to assume supine, left lateral, and knee-chest positions for 30 seconds for each location, and the patients repeated this cycle three times.

Cleanliness of the mucosa of the esophagus and stomach

A four-point grading scale was used to subjectively describe the cleanliness of the colon at the time of the capsule endoscopy as being excellent, good, fair, or poor (Figure 1). 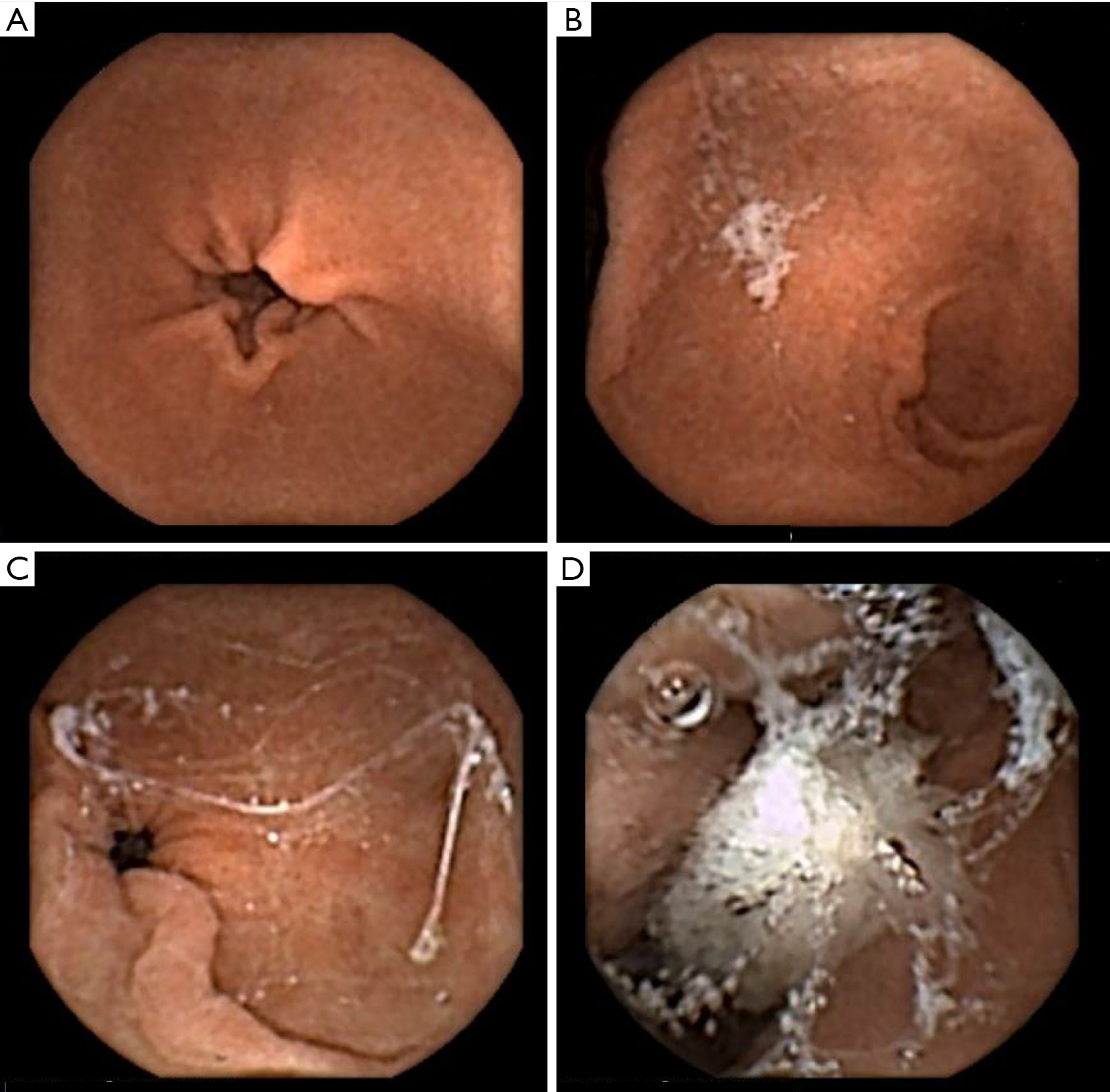 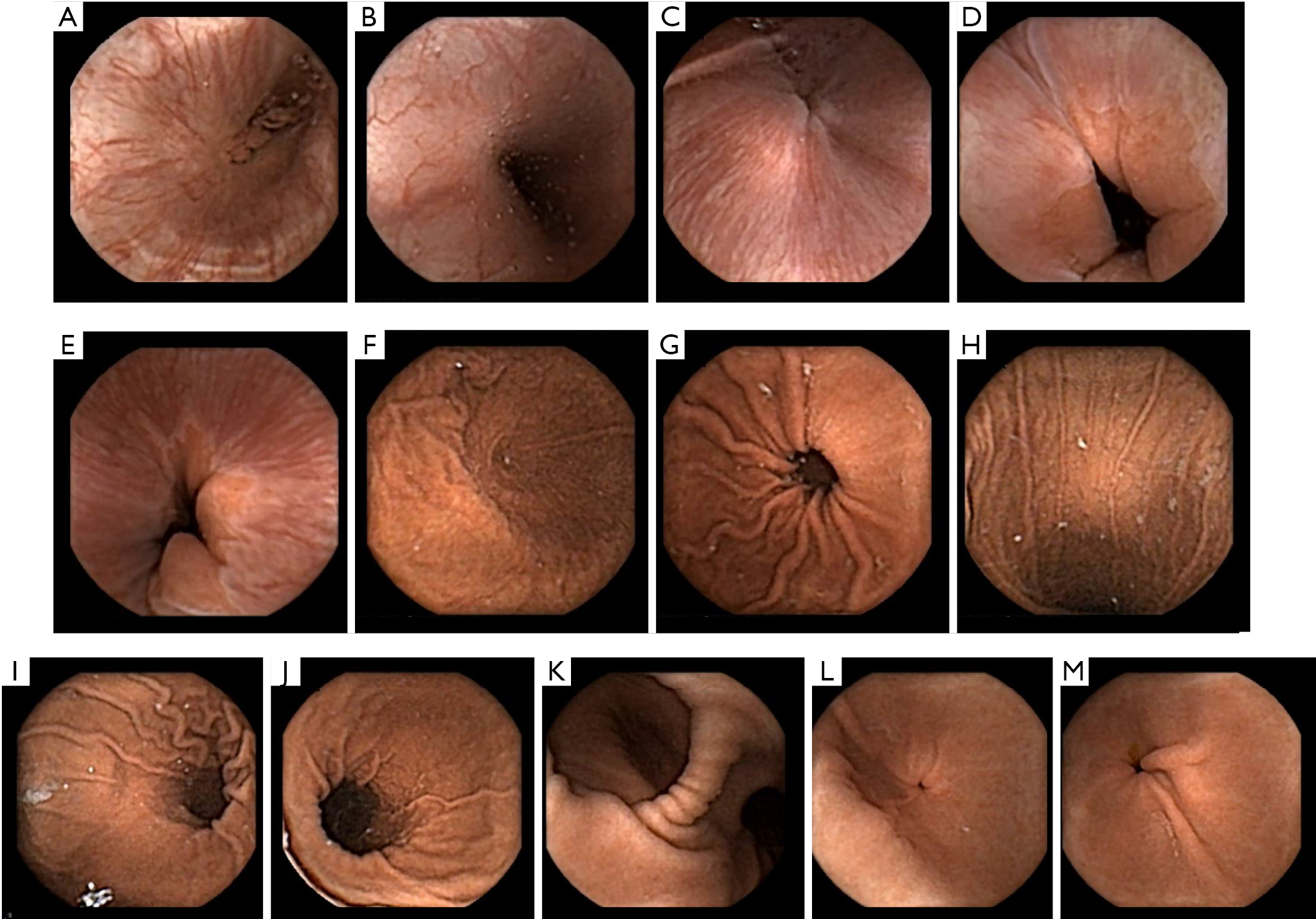 Corresponding relationship between the two imagers and the images 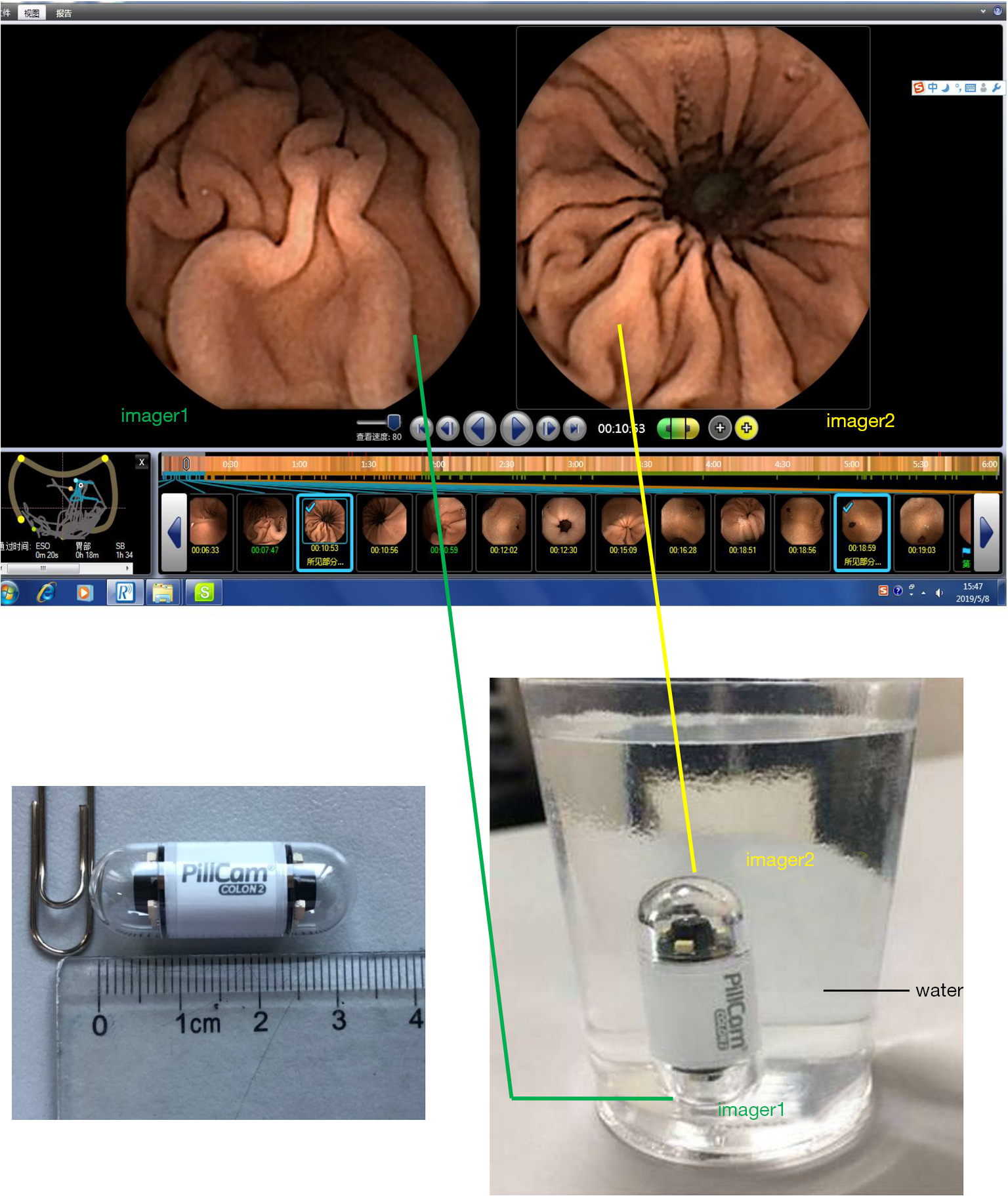 Figure 3 Relationship between the imagers and images. The second-generation CCE-2 capsule measures 31.5 mm × 11.6 mm and has two imagers, one at each end of the capsule. The two imagers collected images separately. Imager1 was heavier than imager2. Imager1 sank and imager2 floated when the capsule was placed into water. 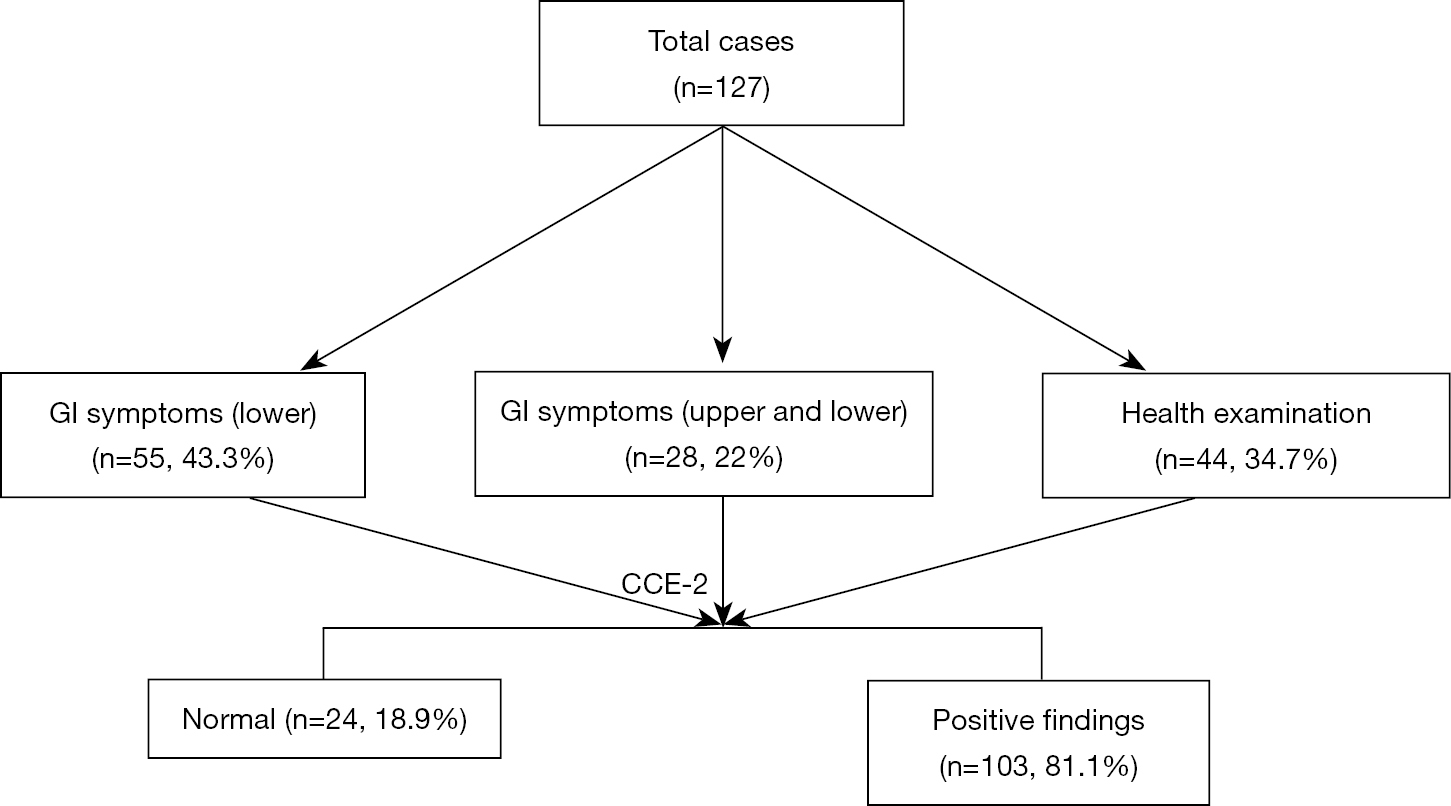 Visualization rates of different landmarks by the imagers

The visualization rates of the different landmarks were recorded, as follows: the superior esophagus (92.9%), middle esophagus (99.2%), inferior esophagus (97.6%), Z-line (74%), cardia (93.7%), fundus (98.5%,), greater curvature of the body (97.6%), lesser curvature of the body (96.1%), anterior gastric body (96.9%), posterior gastric body (94.5%), angulus (95.3%), antrum (100%,), and pylorus (99.2%). The visualization of the Z-line was lower than that of other landmarks of the esophagus and stomach. Regarding the visualization rates of the different imagers, the combined use of the imagers performed better than either imager alone. Imager2 provided enhanced visualization in the stomach compared with imager1. The two-imager combination performed better than either imager alone (Figure 5). 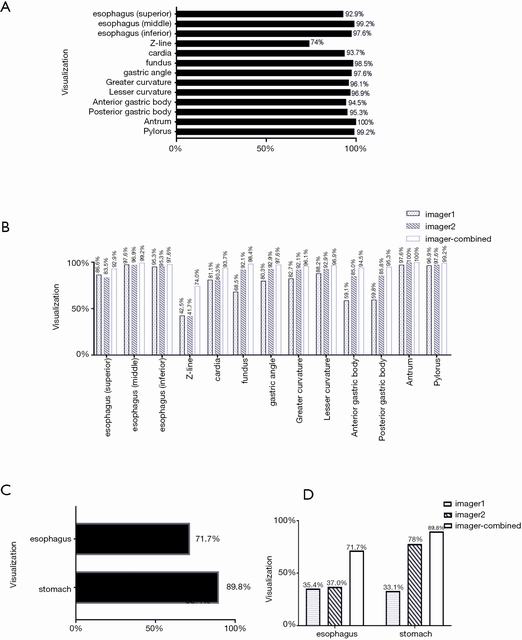 Overall, analysis with the two-imager combination detected a total of 160 positive findings. Single-imager analysis with imager1 detected 133 findings, and single-imager analysis with imager2 detected 137 findings. Therefore, two-imager combination analysis provided 20.3% and 16.8% more findings than imager1 and imager2, respectively. The types of findings and their locations are summarized in Table 1, and the typical lesions are presented in Figure 6. An early esophageal cancer was detected when one patient underwent PillCamColon2 examination due to lower gastrointestinal symptoms (Figure 6). We did not diagnosis hiatal hernia in any of the 127 subjects. 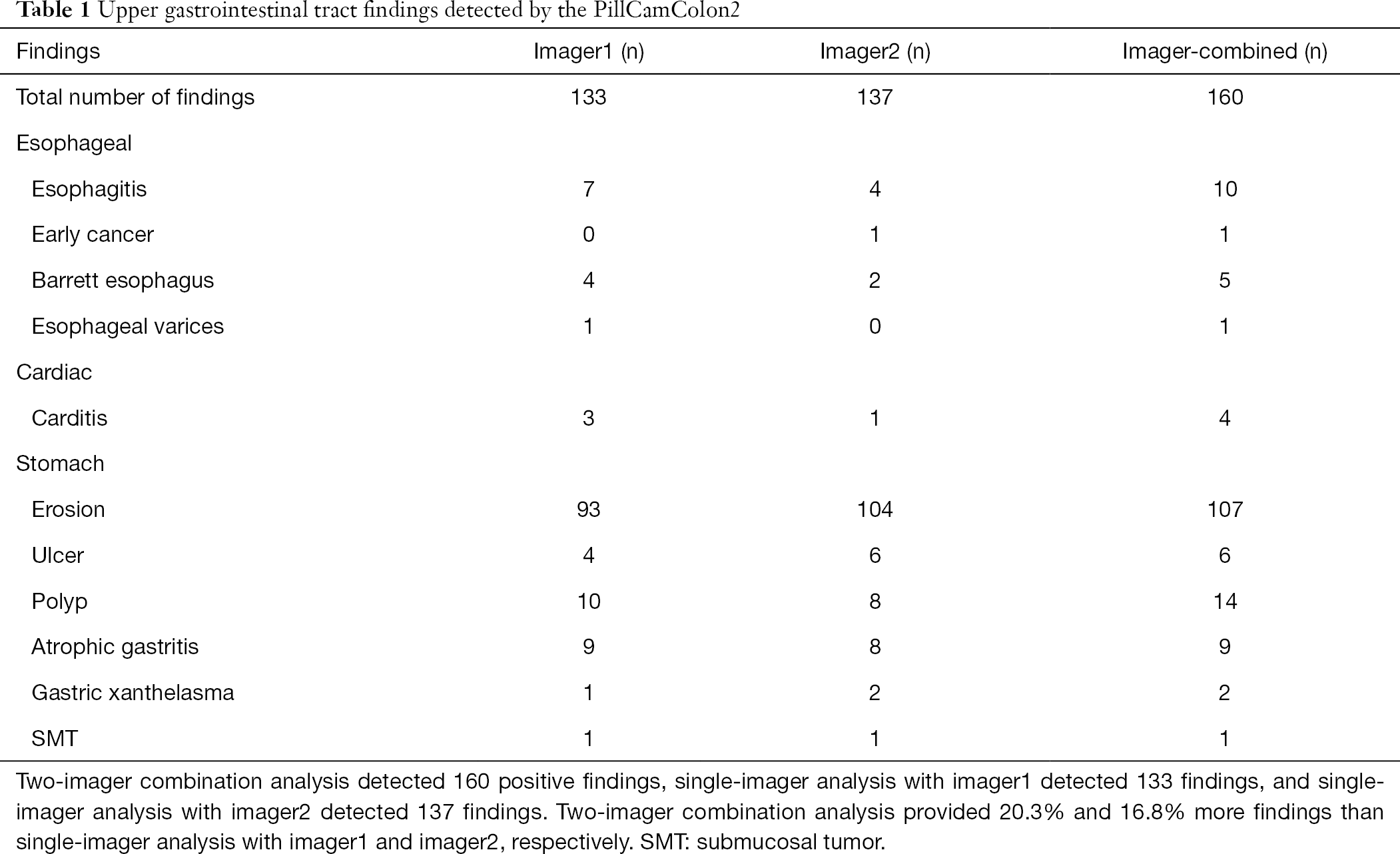 Association of basic characteristics with the visualizations from different imagers

Among these patients, 71.7% of the patients were male, and 28.3% were female. The mean age was 50.4±12.7 (range, 10–83) years. The mean esophageal transit time was 31.5±34.0 (range, 1–181) seconds, and the mean time of the stomach examination was 64.6±48.1 (range, 7–237) minutes. Esophageal and gastric mucosa cleanliness was considered excellent in 41 patients, good in 37 patients, fair in 24 patients, and poor in 25 patients. When accounting for various factors, including location, sex, age, BMI, the examination time of the esophagus and stomach, and the cleanliness, the rate of landmark visualization from imager1 alone was considerably reduced compared with that from imager2, and the rates from both imagers alone were less than the rate of both imagers combined (P<0.01) (Table 2). 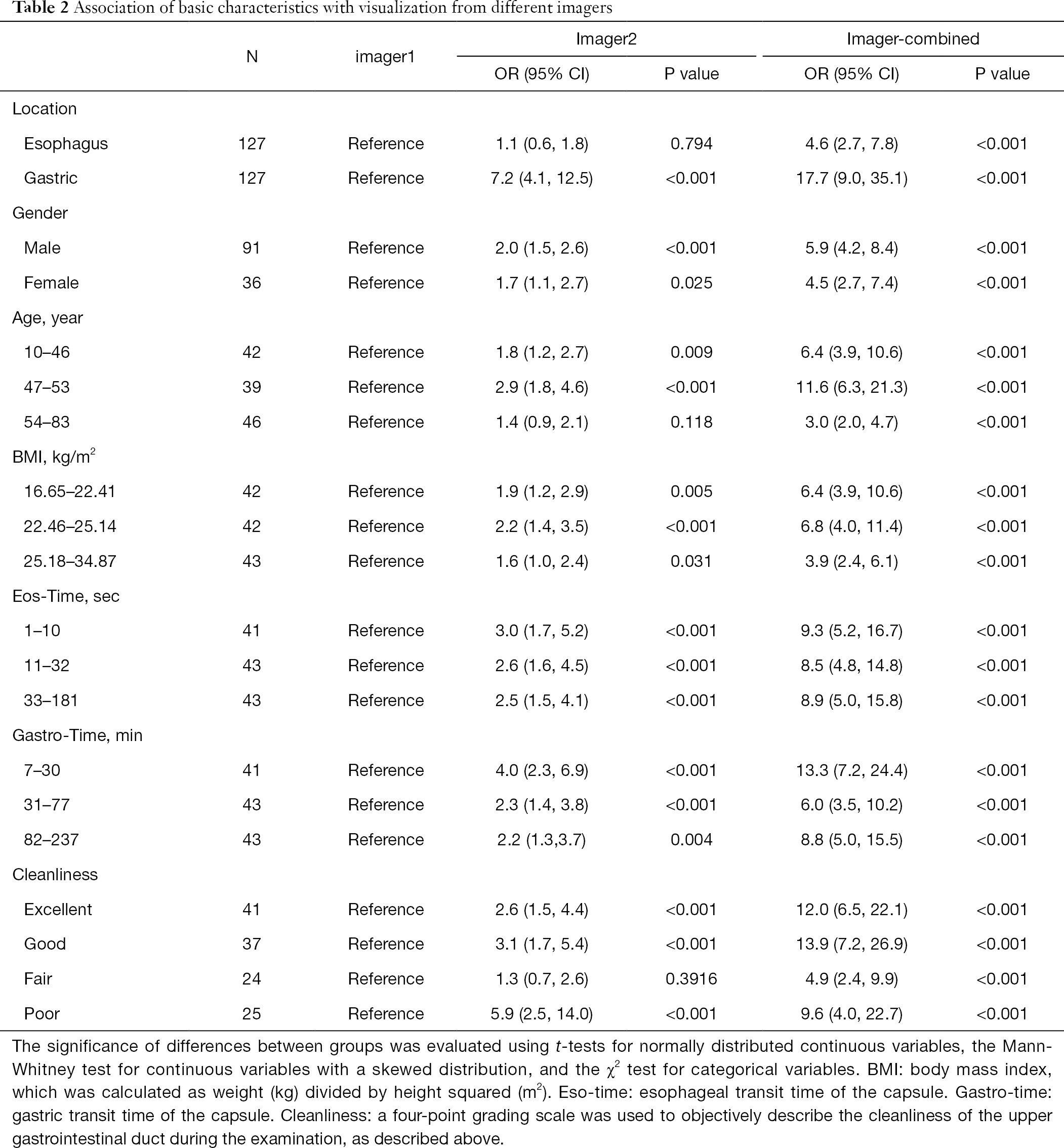 Our study demonstrated that the visualizations were independently associated with the imagers (P<0.001), after adjusting for the confounding factors. In the univariate analysis, model I (adjusted for age and sex) and model II (adjusted for age, sex, location, BMI, Eso-time, Gastro-time, and cleanliness) exhibited significant results (all P<0.001) (Table 3).

The present study demonstrated that doctors detected some upper gastrointestinal lesions when patients underwent a PillCamColon2 procedure, including patients without significant upper gastrointestinal symptoms. Notably, the rates of esophageal and gastric landmark visualization were 71.6% and 89.8%, respectively. Similarly, using the MiroCam Navi technique, successful visualization of the main landmarks was achieved at a rate of approximately 88−100%, with a rate of 92% for the esophagogastric junction, 96% for the fundus, 100% for the body, 96% for the incisura, 96% for the antrum, and 100% for the pylorus (15). With the magnetic-guided capsule endoscopy technique, the visualization rates of the cardia and body were 91.7% and 86.7%, respectively, and those of the fundus, angulus, antrum, and pylorus were 91.7%, 80.0%, 90.0%, and 81.7%, respectively (27). The rates of esophageal and gastric landmark visualization were similar between the CCE-2 and other gastric capsule systems. Additionally, in our study, an early esophageal cancer was detected. These results suggest that the use of the PillCamColon2 system in the upper gastrointestinal tract is feasible and that it represents an optional tool for upper gastrointestinal imaging.

These promising data from the PillCamColon2 system may be beneficial for diagnosing esophageal and gastric diseases, and the two imagers that are located at separate ends of the capsule (which cover nearly a 360° view) may explain the efficacy of this system. Notably, these two imagers are not identical. We analyzed the two imagers of the PillCamColon2 system. After adjusting for confounding factors, we observed that imager2 (yellow) was lighter and exhibited a greater visualization rate than imager2 (green). One possible explanation for why the lighter camera views more landmarks is that this capsule moved like a tumbler. Specifically, this camera rotated around a central axis, and the lighter imager covered a wider range. We also noticed fewer differences between the two imagers in the esophagus than in the stomach, and the size of the cavity may explain this finding. The rotation axis is smaller in a smaller cavity, and the difference between the two imagers was reduced. We hypothesized that the different designs of the imagers would be more useful in larger cavities. To our knowledge, this study is the ﬁrst report on the different performances of the two imagers of the PillCamColon2 system in the upper gastrointestinal duct. This result may provide a reference for the use of capsule endoscopy, but more randomized controlled trials are required to validate our findings.

Our study demonstrated that the combined use of two imagers was better than the use of either of the two imagers alone. This is the first study to focus on the visualization provided by CCE-2 in the upper gastrointestinal tract. Similar to our study, other studies showed that capsule endoscopy with dual cameras had the potential to detect more small-bowel lesions by complementing each other (24-26). Other studies, including a prospective multicenter study, demonstrated that the PillCamColon2 was a safe and effective method for visualizing the colon and detecting colonic lesions (28,29). The present results suggest that the PillCamColon2 is a good choice for screening of the entire gastrointestinal tract.

We thank Dandan Ren for the data collection.

Conflicts of Interest: All authors completed the ICMJE uniform disclosure form (available at http://dx.doi.org/10.21037/atm-20-3699). The authors have no conflicts of interest to declare.

Ethical Statement: The authors are accountable for all aspects of the work in ensuring that questions related to the accuracy or integrity of any part of the work are appropriately investigated and resolved. The study was performed in accordance with the Declaration of Helsinki (as revised in 2013). The Ethics Committee of Tongji Medical College, Huazhong University of Science and Technology approved this study (2017-S313).

Open Access Statement: This study is an Open Access article distributed in accordance with the Creative Commons Attribution-NonCommercial-NoDerivs 4.0 International License (CC BY-NC-ND 4.0), which permits the noncommercial replication and distribution of the article with the strict proviso that no changes or edits are made, and the original work is properly cited (including links to the formal publication via the relevant DOI and the license). See: https://creativecommons.org/licenses/by-nc-nd/4.0/.