Type 2 diabetes mellitus is associated with an alarming rise in the incidence worldwide and is among the most challenging health issues of the 21st century. It is associated with a markedly increased risk of vascular complications, which impair quality of life and reduce life expectancy. Consequently the prevention and treatment of type 2 diabetes is a key objective from a public health point of view. Type 2 diabetes is recognized to be a heterogeneous complex disease. This polygenic disorder is largely influenced by life-style factors among which poor food habits and lack of physical exercise play a major role (1). Glucose metabolism is normally regulated by a feedback loop including islet beta cells and insulin-sensitive tissues, in which tissue sensitivity to insulin affects magnitude of β-cell response (1). When beta cells cannot release sufficient insulin to compensate for insulin resistance, plasma glucose concentrations are rising. Because several mechanisms, including lifestyle, in addition to genetic risk variants contribute to the disease, the feasibility of genotype-based personalized treatment for a complex polygenic disorder like type 2 diabetes has been debated (1). The development of genetics allows the characterization of more specific subgroups of patients with diabetes, especially those initially included in the group of type 2 diabetes such patients with monogenic Maturity Onset of Diabetes of the Young (MODY). However, cases of monogenic diabetes with autosomal dominant inheritance are relatively rare, and most patients with type 2 diabetes rather have a polygenic background (1).

Numerous pharmacologic approaches have been developed in recent years for the management of hyperglycemia in type 2 diabetes and the best choice after failure of metformin monotherapy is becoming increasingly difficult for the physician (2). In a recent systematic review, evidence of pharmacogenetic interactions was found for most oral glucose-lowering agents such as metformin, sulfonylureas, repaglinide, thiazolidinediones, and acarbose (3). These promising results show the potential of using genetic variation to tailor therapy for type 2 diabetes although most reported examples concern pharmacokinetics interactions. A recent example has been described for metformin, the first-line medication for the management of hyperglycemia in type 2 diabetes (2). It has been shown that the genetic variants of organic cation transporters (OCTs) may influence the pharmacokinetics and as a consequence the glucose-lowering response to the drug (4). While high-quality controlled studies with prespecified analyses are still lacking, preliminary available results bring the promise of personalized medicine in type 2 diabetes one step closer to success (3).

Whereas type 2 diabetes is characterized by both insulin resistance and defective insulin secretion, an increasing set of data suggests that the defect in insulin secretion plays a prominent role in the development and progression of hyperglycemia (5). Although environmental changes play an essential part, beta-cell dysfunction has a clear genetic component (1). Much interest exists in finding medications that can ameliorate the function of beta cell to improve glucose homeostasis. One major objective is the protection of beta cell to avoid its progressive loss of function that largely explains the almost ineluctable deterioration of glucose control with time that is commonly observed in patients with type 2 diabetes.

The physiologic mechanisms of glucose-induced insulin secretion are well understood. By closing ATP-sensitive K+ [K(ATP)] channels, glucose promotes depolarization-dependent Ca2+ entry and cytoplasmic free Ca2+ concentration rise in beta cells, leading to activation of the exocytotic machinery and glucose-dependent insulin secretion. Thus, K(ATP) channels in beta cells are a major target for insulinotropic drugs. Enhancing insulin secretion can be obtained using sulfonylureas (or glinides), compounds that directly close K(ATP) channels of the beta cells independently of ambient glucose concentration. These compounds are commonly used for the management of type 2 diabetes for several decades. Despite the launch of new pharmacologic approaches, they still occupy a major place to control hyperglycemia in type 2 diabetes (2). However, as sulfonylureas stimulate insulin secretion blindly of ambient glucose, they are associated with an increased risk of hypoglycemia. Some genetic variants have been reported, which may affect both pharmacokinetics and pharmacodynamics of sulfonylureas and repaglinide (3). As an example, the GoDARTs study investigated the effect of TCF7L2 rs12255372 and rs7903146 genotypes on glycemic response in patients with type 2 diabetes and showed that variation in TCF7L2 influences therapeutic response to sulfonylureas but not metformin. Thus, this study establishes that genetic variation can alter response to sulfonylurea therapy in type 2 diabetes (6). To what extent such genetic variation may contribute to the between-subject variability in glucose-lowering effect and in the risk of hypoglycemia remains, however, to be investigated.

The most remarkable genotype-based therapy in diabetes field concerns the use of sulfonylureas in patients with neonatal diabetes (7). Heterozygous activating mutations in KCNJ11, encoding the Kir6.2 subunit of the K(ATP) channel, cause around half of cases of diabetes diagnosed in patients under 6 months of age. These children present with ketoacidosis or severe hyperglycemia and were classically treated with insulin. In these young patients, diabetes results from impaired insulin secretion caused by a failure of the beta-cell K(ATP) channel to close in response to increased intracellular ATP. Because sulfonylureas close the K(ATP) channel by an ATP-independent route, sulfonylurea therapy is remarkably effective (more than insulin indeed) for patients with diabetes caused by KCNJ11 mutations (7).

More recently, new agents that can enhance insulin secretion by targeting the glucagon-like peptide-1 (GLP-1) receptor present in the beta cells have been developed with the commercialization of specific inhibitors of dipeptidyl peptidase-4 (DPP-4), an enzyme that degrades GLP-1 into inactive products, or injectable GLP-1 receptor agonists resistant to the action of DPP-4 (2). These so-called incretin-based therapies potentiate insulin secretion in a glucose-dependent manner and thus rarely cause hypoglycemia, which represents an obvious advantage in clinical practice compared to sulfonylureas (2). No special mention of incretin-based therapies could be found in a review about pharmacogenetics of type 2 diabetes (3). However, it has been recently shown that the CTRB1/2 locus, a known diabetes risk locus, not only affects diabetes susceptibility but also treatment via the incretin pathway (8). Indeed, rs7202877 near CTRB1/2 associated with a lower glycated hemoglobin (HbA1c) response to DPP-4 inhibitor treatment in G allele carriers (8). In another study, polymorphisms in the transcription factor 7-like 2 (TCF7L2) gene were associated with type 2 diabetes and reduced insulin secretion and variants of TCF7L2 specifically impaired GLP-1-induced insulin secretion (9). 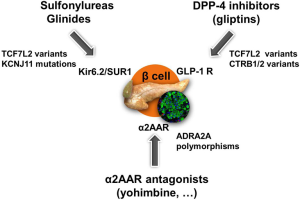 ADRA2A encodes the α2AAR, which modulates adrenergic suppression of insulin secretion. A genetic variant in ADRA2A has been shown to be associated with defective beta-cell function (15). In man, the A allele for a single-nucleotide polymorphism, rs553668, in ADRA2A was associated with reduced glucose-stimulated insulin secretion and increased type 2 diabetes risk, a finding replicated in several Caucasian cohorts (15-17). The ADRA2A genetic variation may affect baseline insulin concentrations in healthy individuals and the insulin decrease after administration of dexmedetomidine, a selective α2AAR agonist (18). On the contrary, the α2AAR antagonist yohimbine has been shown to enhance insulin release in vitro in islets from organ donors carrying the risk allele to levels similar to those in nonrisk carriers (15). In islets from donors not carrying the risk allele, yohimbine was without effect, indicating that yohimbine specifically counteracts the secretion defect associated with the ADRA2A risk allele (15).

The successful translation of genomic information into clinical intervention in diabetic patients provides proof of concept for the feasibility of individualized treatment based on genotype. Until now, most examples of a significant influence of pharmacogenetics in type 2 diabetes concern changes in pharmacokinetics, which may subsequently translate to pharmacodynamic changes (3,4). Genetic risk variants can be used to guide therapeutic interventions tailored to the individual patient in the future. Tang et al. tested yohimbine because it has been used clinically for other indications and is well characterized. For long-term clinical use, other α2AAR antagonists with less central effects would probably be preferred to avoid adverse events. Several other α2AAR antagonists exist and should be investigated in type 2 diabetes according to this new genotype-based opportunity. Nevertheless, because α2AAR are present in several tissues and organs, its antagonism may potentially cause undesired adverse effects, especially regarding the cardiovascular system.

More generally, a patient-centered approach is recommended for the management of type 2 diabetes. After metformin therapy, and according to the recently updated joint American Diabetes Association (ADA)-European Association for the Study of Diabetes (EASD) position statement (2), the physician has the choice between six glucose-lowering strategies: adding a sulfonylurea, a glitazone, a DPP-4 inhibitor, a sodium-glucose cotransporter type 2 (SGLT2) inhibitor, a GLP-1 receptor agonist or basal insulin. The choice is based upon simple key-features such as glucose-lowering effect (efficacy), risk of hypoglycemia, body weight changes, overall safety and cost. The future will probably see the development of new approaches that may help the physician in selecting the best responders to a specific drug using a genotype-based approach besides other classic and phenotype-based strategies. Although pharmacogenomics can explain some of the heterogeneity in dose requirements, response and incidence of adverse effects of drugs between individuals, it is now clearly understood that much of the diversity in drug effects cannot be solely explained by studying the genomic diversity in patients with type 2 diabetes. Epigenomics, the field that focuses on non-genomic modifications that influence gene expression, may expand the scope of pharmacogenomics towards optimization of drug therapy and the realization of personalized medicine (20). Future individualized treatment of type 2 diabetes should involve a combination of therapeutic strategies, including genotype-based approaches, besides life-style modifications, in order to enhance insulin secretion (as discussed in this paper) and reduce insulin resistance, the two key defects of type 2 diabetes mellitus.