Analysis of endometrial microbiota in intrauterine adhesion by high-throughput sequencing

Intrauterine adhesions (IUA), also known as Asherman’s syndrome, is an intrauterine condition characterized by the physiological endometrium being replaced by fibrotic tissue or scar after the mechanical or infectious injury of the endometrium (1,2). IUA could progressively cause hypomenorrhea, amenorrhea, infertility, spontaneous abortions, and even placenta implantation. Recently, the rate of IUA recurrence, especially in severe cases, remains high even after hysteroscopic adhesiolysis combined with various adjuvant therapies. Therefore, IUA therapy is still challenging (3). Endometrial damage and infection are recognized as the two major risk factors of IUA.

The balance of micro-ecology in the female reproductive tract plays a key role in health. An increasing body of evidence suggests that the change of composition and distribution of endometrial microbiota is related to endometrial diseases such as endometrial polyps, endometrial cancer, and infertility (4-6). Patients with IUA have micro-ecological imbalance in the lower genital tract, and the V4 region or the V3 and V4 region of the 16S rDNA in each sample was amplified by PCR method (7,8). However, there are few reports on endometrial microbiota in patients with IUA.

Moreover, a growing body of evidence shows that organ fibrosis is associated with microbiota. The specific microbial signatures can be used to distinguish the severity of liver diseases, such as mild disease and advanced fibrosis (9). Recent 454 pyrosequencing data have revealed that the progression of idiopathic pulmonary fibrosis is related to the presence of specific members in Staphylococcus and Streptococcus genera, suggestive of the role of microbiome in fibrotic processes (10).

Given the inflammatory profile and fibrosis essence of IUA, in this study we used high throughput sequencing techniques to characterize endometrial microbial communities in patients with IUA and the intrauterine microbial diversity difference compared to the females without intrauterine lesions. The authors present the study in accordance with the MDAR reporting checklist (available at http://dx.doi.org/10.21037/atm-20-2813).

This study was conducted in accordance with the Declaration of Helsinki (as was revised in 2013). The study was approved by the Medical Ethics Committees at the Zhujiang Hospital of Southern Medical University (NO. 2019-KY-077-01) and all the patients provided informed consent. Demographic data of 67 participants from March 2016 to March 2019 were collected retrospectively. Among them, 46 patients with IUA were enrolled as the observation group (Group IUA), and 21 infertile females without intrauterine lesion were enrolled as the control group (Group C). Subjects eligible for Group IUA met the following criterion: diagnostic hysteroscopy confirmed the presence of adhesions in the intrauterine cavity. The inclusion criteria in Group C were the following: hysteroscopy and subsequent endometrial pathology excluded the lesions in the intrauterine cavity. The exclusion criteria of all participants were: women who had taken antibiotics within three weeks pre-operation, other intrauterine lesions such as endometrial polyps, submucosal myoma, endometrial cancer and endometrial hyperplasia, coagulopathy, vaginitis and acute pelvic inflammatory disease. Group IUA was further divided into three subgroups based on American Fertility Society Rating System: 20 patients scored from 1 to 4 were classified as Stage I (Group IUA-Mild), and 12 patients scored from 5 to 8 as Stage II (Group IUA-Moderate), and the remaining scored from 9 to 12 as Stage III (Group IUA-Severe). As shown in Table 1, clinical characteristics of these groups were comparable except for the number of intrauterine operations.

All samples were collected in the early stage of endometrial proliferation, or any day for the patients with secondary amenorrhea. After vaginal and cervical canal disinfection, endometrial tissues were taken gently from the intrauterine cavity using a hysteroscopic cutting ring without electricity. During the collection of endometrial samples, hysteroscope sheath was used to avoid contamination by vaginal microbiota. Each sample was placed in a sterile tube and immediately stored in liquid nitrogen for DNA extraction.

Genomic DNA was extracted from endometrial tissues using HiPure Bacterial DNA Kit (Magen, USA). The concentration and quality of purified DNA were determined by a spectrophotometer at 230 and 260 nm (NanoDrop-One, Thermo Fisher Scientific, MA, USA). The V4 region of the 16S rDNA was amplified using Premix-Taq (Takara Biotechnology, Dalian, China), and 515F/806R primers with 12 bp barcode (515F, 5'-GTGCCAGCMGCCGCGGTAA-3'; 806R, 5'-GGACTACHVGGGTWTCTAAT-3'). The cycling conditions for PCR were as follows: 94 °C for 5 min, followed by 30 cycles of 94 °C for 30 sec, 52 °C for 30 sec, 72 °C for 30 sec and another 10 min at 72 °C. According to Gene Tools Analysis software (version 4.03.05.0, Syn-Gene), PCR products were mixed into one tube in equal proportions, and the amplicon mixture was purified with E.Z.N.A. Gel Extraction Kit (Omega, USA). The 16S rDNA sequencing was performed with a high-throughput next-generation Illumina Hiseq2500 platform (11).

The quality filtering on the Paired-end reads from the original DNA fragments was processed with Trimmomatic software (12) (version 0.33, http://www.usadellab.org/cms/?page=trimmomatic) to remove paired-end reads with one or more ambiguous bases. The retained paired-end reads were trimmed at the 3’ end to eliminate the continuous bases with a quality score <20 and reads with sequence length <100 bp to obtain high-quality reads. Paired-end clean reads were merged using FLASH (version 1.2.11, https://ccb.jhu.edu/software/FLASH/) according to the relationship of the overlap between the paired-end reads. The sequences were assigned to each sample based on their unique barcode and primer using Mothur software (13) (version 1.35.1, http://www.mothur.org), after which the barcodes and primers were removed to get effective Clean Tags.

Further processing was performed using QIIME (15). The taxonomic assignment of representative sequences was performed using the Ribosomal Database Project (RDP) Classifier (16) and a minimum confidence threshold to default was adjusted to 50%. Dominance and the Simpson indexes were used to measure α-diversity for species richness and evenness within different bacterial populations. The weighted UniFrac (17) was used to measure β-diversity for the diversity between bacterial communities in terms of ecological distance between samples. The difference in bacterial community composition was analyzed by Nonmetric Multidimensional Scaling (NMDS) based on Weighted Unifrac distance. Moreover, the difference in β-diversity among groups was analyzed by ADONIS, a multivariate analysis of variance based on distance matrices and permutation.

Statistical analysis was performed with Statistical Product and Service Solutions (SPSS) (version 20.0). Data normality was tested with the Kolmogorov-Smirnov test. Homogeneity of variance was detected with the Levene test. Data were presented as means ± standard deviations. Data were compared by the Mann-Whitney test or the Kruskal-Wallis analysis of variance on ranks, followed by Dunn’s test. The statistical significance was set at two-side P<0.05.

Differences in bacterial population between Group IUA and Group C 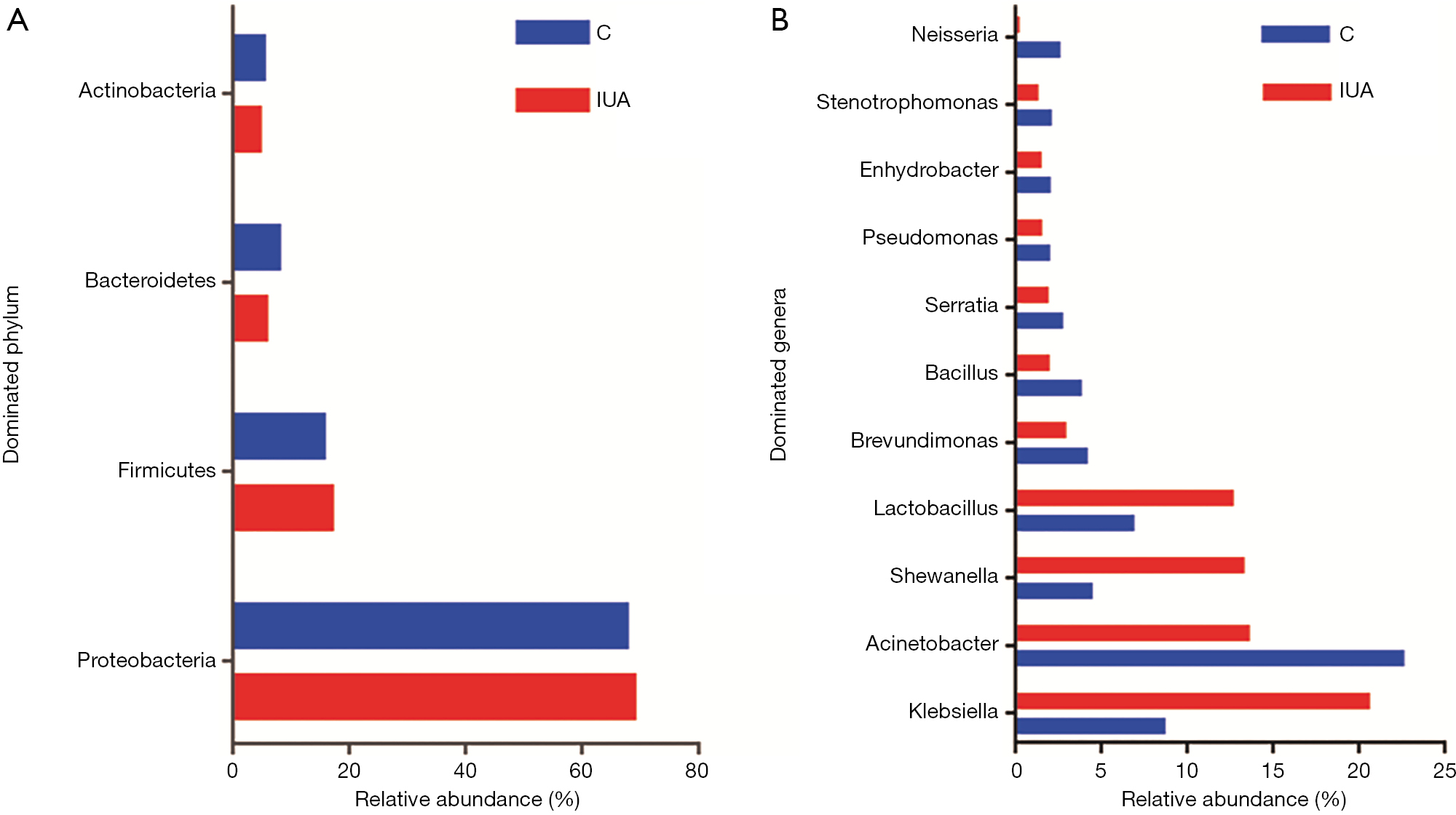 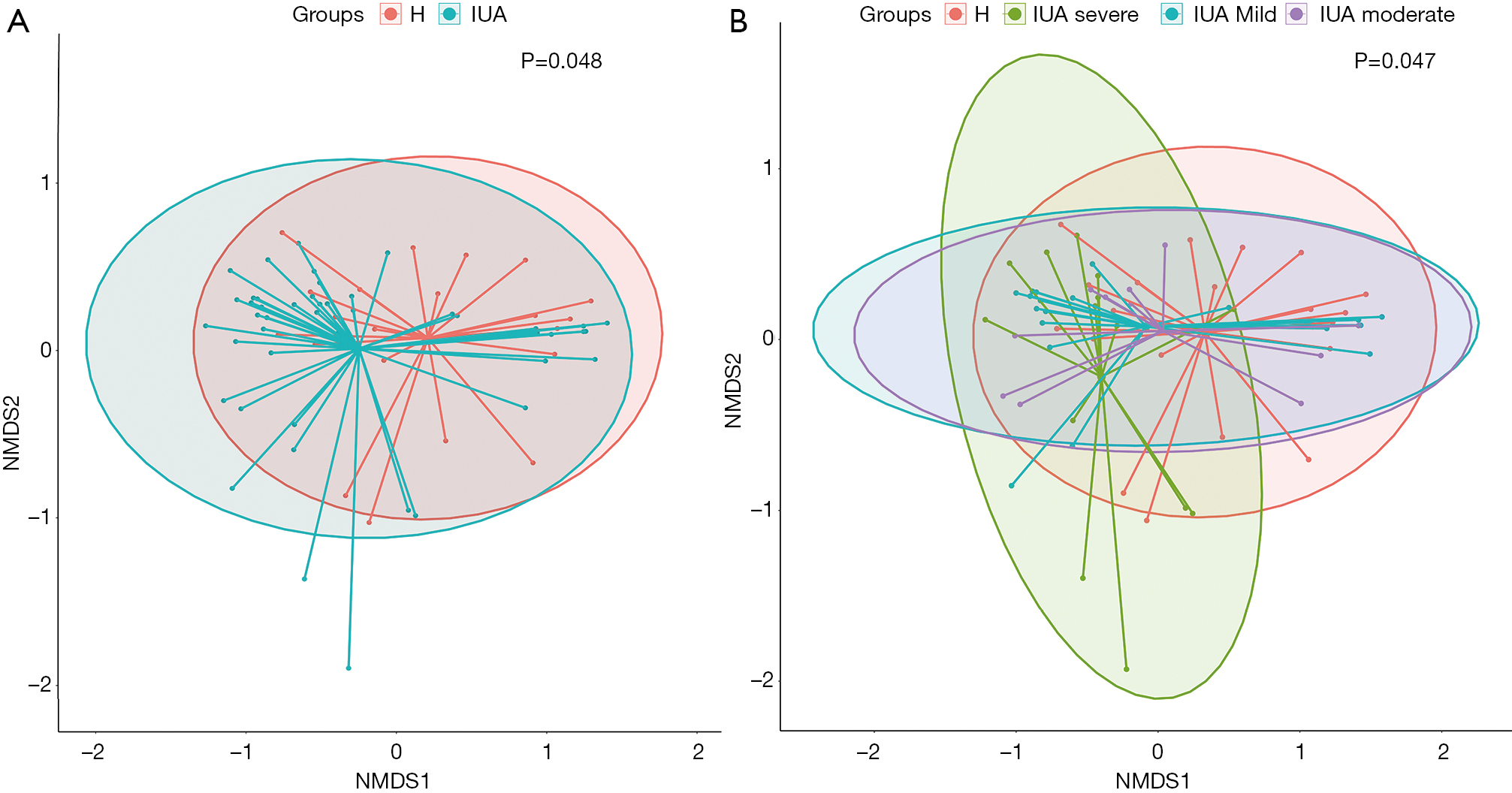 As shown in Figure 3A, at the phylum level, all groups were dominated by Proteobacteria, Firmicutes, Bacteroidetes and Actinobacteria. With the increase of the severity of adhesions, the proportion of Proteobacteria decreased (73.30%, 70.29% and 64.48%), while the proportion of Firmicutes increased (12.79%, 14.02% and 25.58%), although there was no difference. As shown in Figure 3B, compared with Group C, the abundance of Klebsiella sequences was significantly higher in endometrial communities of Groups IUA-mild, IUA-moderate and IUA-severe (31.44%, 12.51% and 18.06%, P=0.046), while Acinetobacter sequences was significantly lower (12.74%, 16.18% and 12.10%, P=0.020). In addition, Group IUA-Mild had the highest proportion of Lactobacillus. 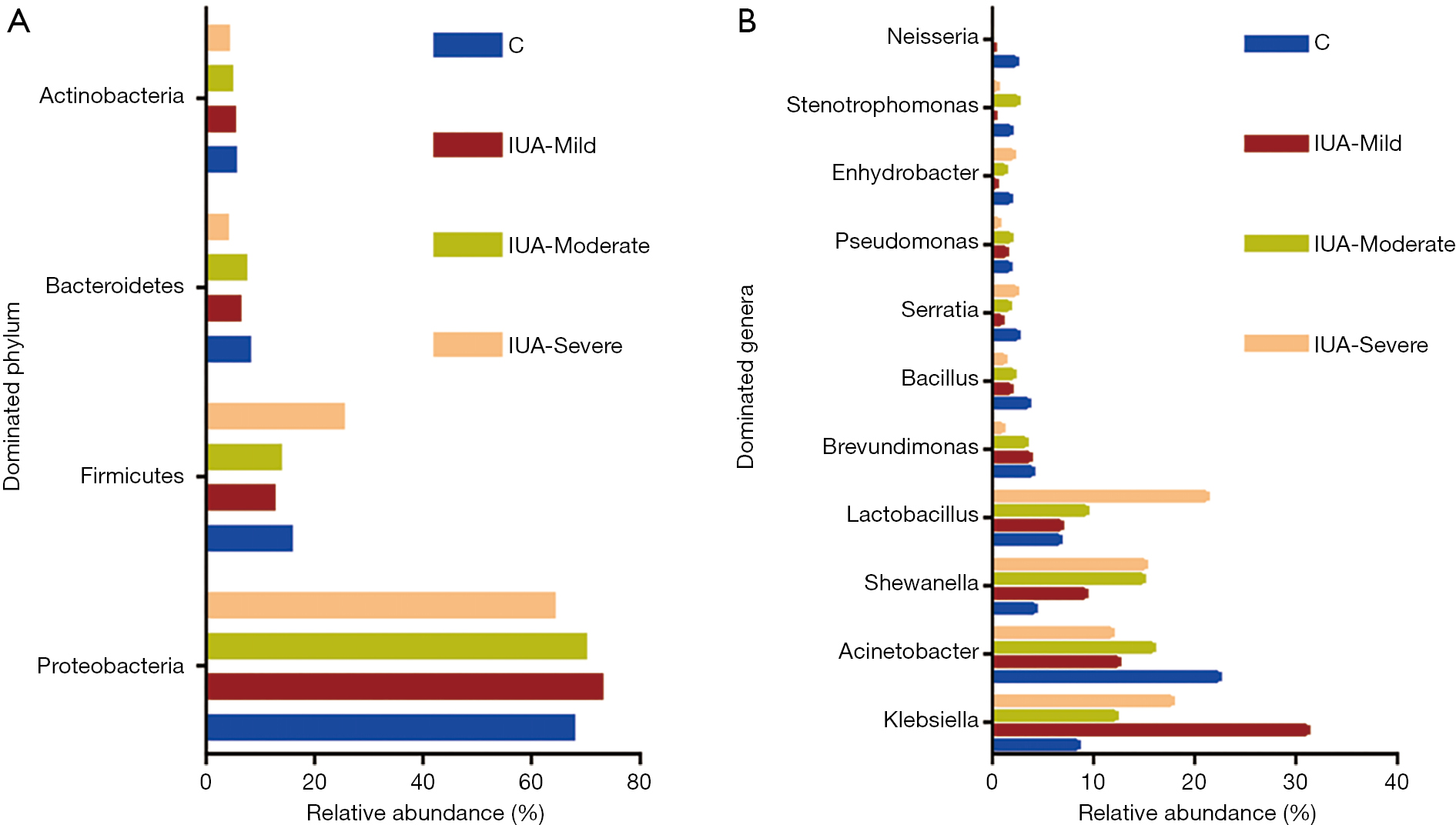 In present study, for all participants, the genera with relatively high abundance of endometrial bacteria were Proteobacteria, Firmicutes, Bacteroidetes, Actinobacteria and Lactobacillus. These results are consistent with previous reports on uterine microbiota in patients with endometrial polyps, endometrial cancer, and infertility (4-6). Klebsiella, Acinetobacter, Shewanella, Brevundimonas, Bacillus, Serratia, Pseudomonas, Stenotrophomonas, Neisseria, were also detected in all participants. However, our results are not consistent with some results reported previously (7,8). Liu et al. (7) showed that patients with IUA had significantly lower percentage of Firmicutes and higher percentage of Actinobacteria in the vagina, and half of the patients had overgrowth of Gardnerella and Prevotella accompanied with the reduction of Lactobacillus in the vagina. Zhao et al. (8) demonstrated that the proportion of Firmicutes was higher in vagina and cervical canal from most cases with IUA, but some species including Acidobacteria, Euryarchaeota, Chlamydia, Chlorobi, Planctomycetes and TM6 (Dependentiae) almost disappeared. We found that the proportion of Actinobacteria was lower than that of Firmicutes, while Lactobacillus increased among endometrial microbiota in patients with IUA. This discrepancy might be related to different severity of IUA, different sites of samples and different ecological niches in the reproductive tract.

For the structure of the microbial community, mild IUA cohort could be noticeably distinguished from the control cohort. This indicates that the microbiota may play a role in the early stage of endometrial fibrosis. However, the structural difference was not significant between the moderate or severe IUA cohort and the mild IUA cohort, indicating differential microbial community of endometrium associated with the severity of IUA.

In addition, the number of endometrial Klebsiella in patients with IUA was significantly higher than that of the control group, and this bacterium was mainly enriched in the mild IUA cohort. Klebsiella is a kind of encapsulated Gram-negative bacilli in Enterobacteriaceae, and it is a typical conditional pathogen (18). Some strains of Klebsiella can produce virulence factors such as lipopolysaccharide (LPS), which acts on the receptor Toll-like receptors 4 (TLR4) to induce fibrosis and inflammation (19). As we know, the expression of TLR4 is constant in female endometrium (20). Liu et al. showed that LPS-induced endometrial infection played an important part in the occurrence of IUA (2). Therefore, endometrial Klebsiella may be involved in the occurrence of IUA. Further studies are needed to define which Klebsiella species are present in endometrial samples and whether they are capable of inducing pathogenic state.

This study has some limitations. First, the sample size may be small, which might cause that we did not detect significant differences for some comparisons. Second, we did not choose healthy women as the control due to ethical restriction, so we were unable to evaluate whether infertile factors could affect endometrial microbiota. Nevertheless, endometrial microbiota should be confined to intrauterine cavity, and the patients with IUA might have other infertility factors. Moreover, this study lacked the inclusion of negative controls because of ethical restriction. With such low abundance microbiota, this type of control is essential.

In conclusion, the uterine cavity is not sterile and actually contains various bacteria. Uterine microbiota are different between patients with IUA and infertility patients without intrauterine lesions and all potential variation of uterine microbes might cause IUA. Maintaining the balance of reproductive tract microbiota could enhance the repair of endometrium after injuries.

We are thankful to our colleagues who provided expertise.

Funding: This study was supported by grants from the National Natural Science Foundation of China (Grant No. 81701396), the Fundamental Research Funds for the Central Universities (Grant No. 2018MS83), High-level Hospital Construction Project (Grant No. KJ012019098), and Medical Scientific Research Foundation of Guangdong Province (Grant No. B2019015), and the Science and Technology Program of Guangzhou (Grant No. 201707010326).

Reporting Checklist: The authors have completed the MDAR reporting checklist. Available at http://dx.doi.org/10.21037/atm-20-2813

Conflicts of Interest: All authors have completed the ICMJE uniform disclosure form (available at: http://dx.doi.org/10.21037/atm-20-2813). The authors have no conflicts of interest to declare.

Ethical Statement: The authors are accountable for all aspects of the work in ensuring that questions related to the accuracy or integrity of any part of the work are appropriately investigated and resolved. This study was conducted in accordance with the Declaration of Helsinki (as was revised in 2013). The study was approved by the Medical Ethics Committees at the Zhujiang Hospital of Southern Medical University (No. 2019-KY-077-01) and informed consent was taken from all the patients.