We present the following article in accordance with the PRISMA reporting checklist (available at http://dx.doi.org/10.21037/atm-20-3513).

A literature search was conducted in PubMed, Ovid, and Web of Science from inception through December 2019 with the following terms: ((((skip N2 OR skip mediastinal lymph node) OR skip metastases)) AND (((((lung cancer) OR lung carcinoma) OR lung neoplasm) OR lung adenocarcinomas) OR NSCLC) in all fields. All references of relevant articles were reviewed.

The results were carefully reviewed by two authors independently (Jiahan Cheng and Zihuai Wang), and any disagreement during the process was discussed and solved with a third author (Lunxu Liu). Studies focusing on the prognostic value of skip metastasis and those reporting the relationship between clinicopathologic features and skip metastasis were included in our analysis. All the included articles assessed the pathological diagnosis under surgical resection. Reviews, conference abstracts, case reports, and in vitro or animal studies were excluded. Articles in languages other than English or Chinese were also excluded.

Quality assessment was conducted using the Newcastle-Ottawa Scale (NOS) for all included studies (12). Scores of 1–9 were assigned to articles in the categories of patient selection, group comparability and outcomes ascertainment. Articles that scored greater than 7 were deemed as high quality, those with scores of 6–7 as fair quality, and those with scores less than 6 as poor quality.

Hazard ratio (HR) and relative risk (RR) were extracted from all eligible articles along with associated 95% confidential intervals (CI). HR was employed to assess the prognostic effect of skip metastasis in overall survival (OS) and disease-free survival (DFS) or recurrence-free survival (RFS). Odds ratio (OR) was determined using Mantel-Haenszel method to estimate the relationship between skip metastasis and clinic-pathological characteristics. Heterogeneity among the included studies was evaluated using Chi-square test with P value set at 0.10. I-square (I2) test was applied to assess total variation among the studies. Mild heterogeneity was deﬁned as I2<50% and P > 0.1, and a standard ﬁxed-effect model test was used to validate outcome synthesis. For studies yielding P<0.1 or I2>50%, the random effect model was applied to pool the data (13). Compared with that in the fixed-effect model, weighting within the random-effect model assumes two sources of variability in effects, one from sampling error and the other from study level differences. A two-sided P value with <0.05 was viewed as statistically significant. All statistical analyses were conducted using Stata version 12.0 (StataCorp., College Station, TX, USA).

Sensitivity analysis was conducted by sequentially retracting each study to evaluate the stability of our results. Begg’s weighted regression model was applied to examine the publication bias of the studies (14).

A total of 398 articles were found from the initial search after discarding duplicates. Following a review of titles and abstracts, the full texts of 60 papers were assessed. All reviews, conference abstracts and case reports were excluded from our analysis, yielding 29 articles for inclusion. The selection process is depicted in Figure 1. The baseline characteristics of all included articles are shown in Table 1. The included studies were all retrospective. The articles compared the prognostic effect and clinicopathologic difference between patients with skip metastasis and non-skip N2. A total of 1,806 patients with skip N2 metastasis and 4,670 patients with N1 positive mediastinal metastasis were included in our study, while 3 articles did not report the exact number of the patients in each group (2,15,16). The publication years spanned 1996 through 2019. Only one article underwent propensity score matching to adjust the baseline characteristics between two groups (17). Quality assessment by NOS is reported in Table 1. 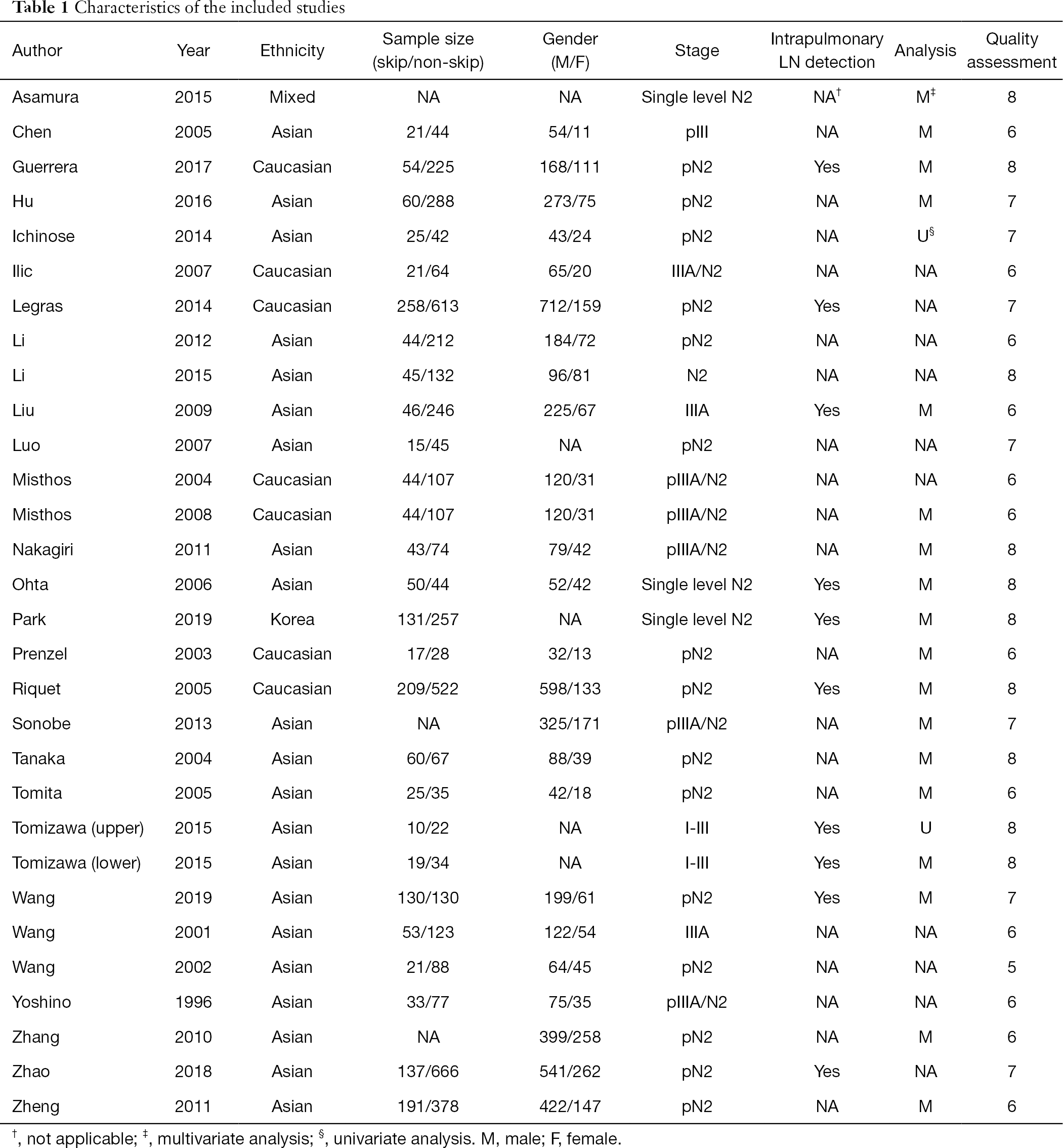 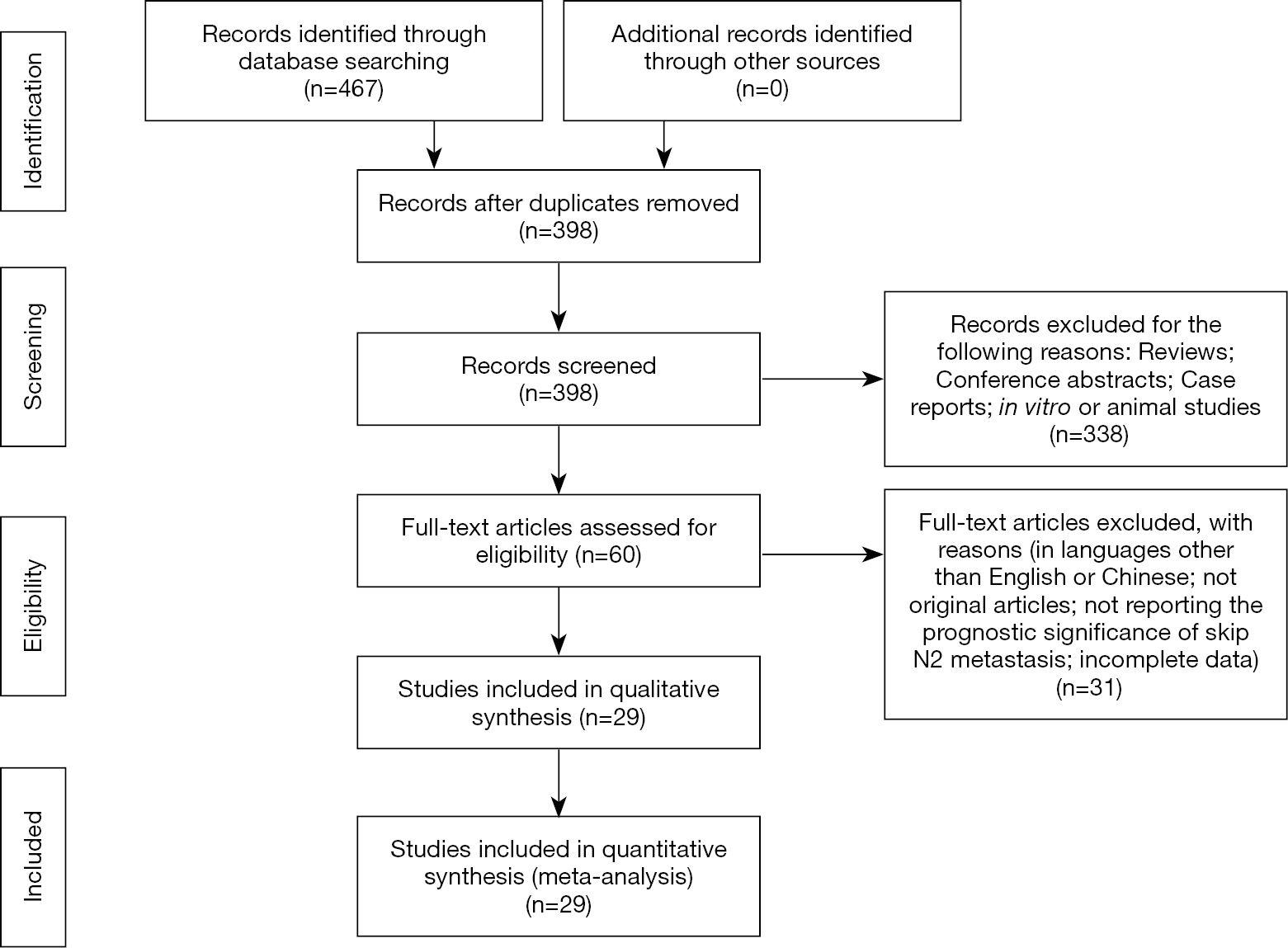 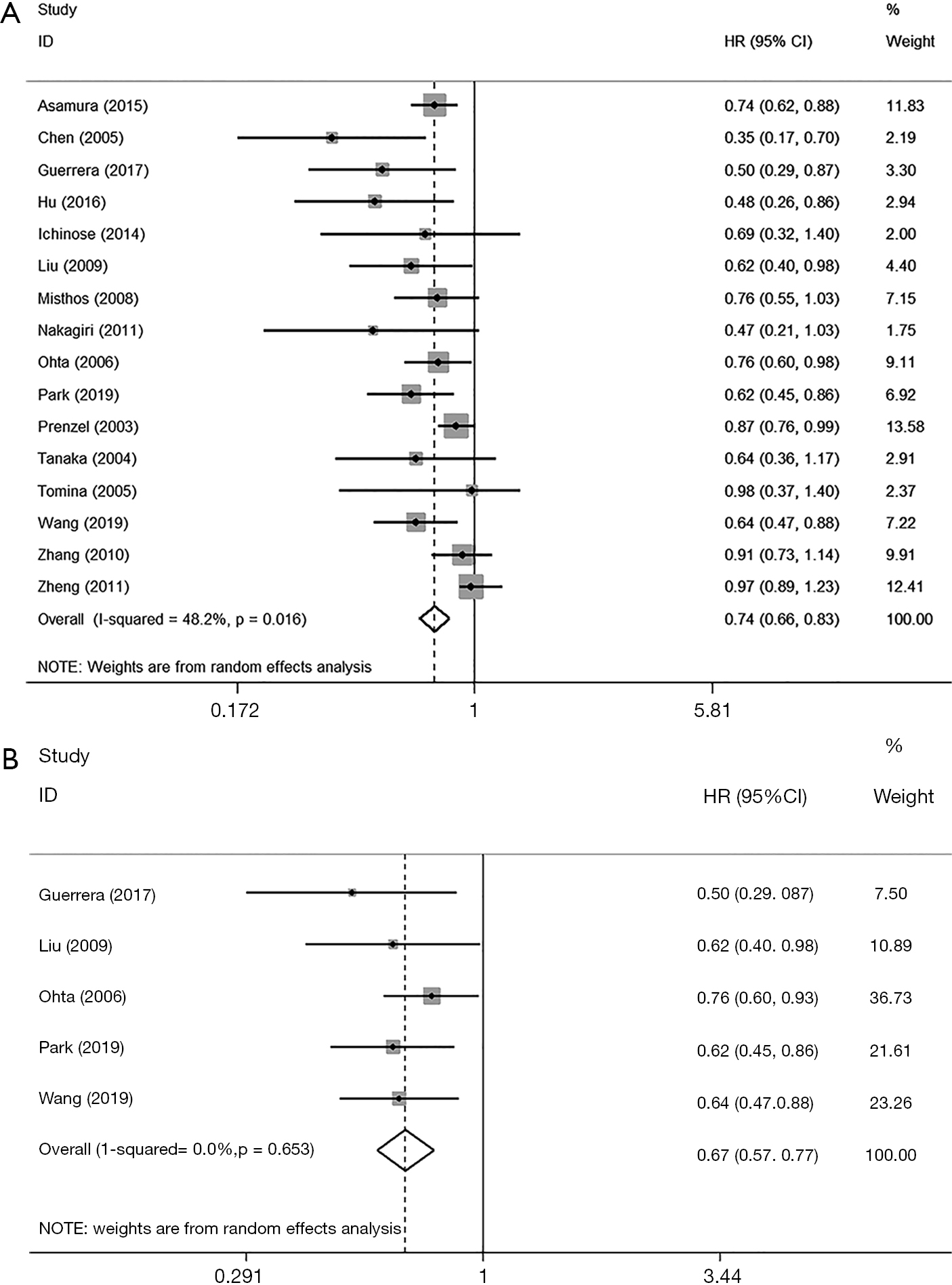 Figure 2 Comparison between skip and non-skip N2 metastatic patients in overall survival (A), and disease-free survival (B). 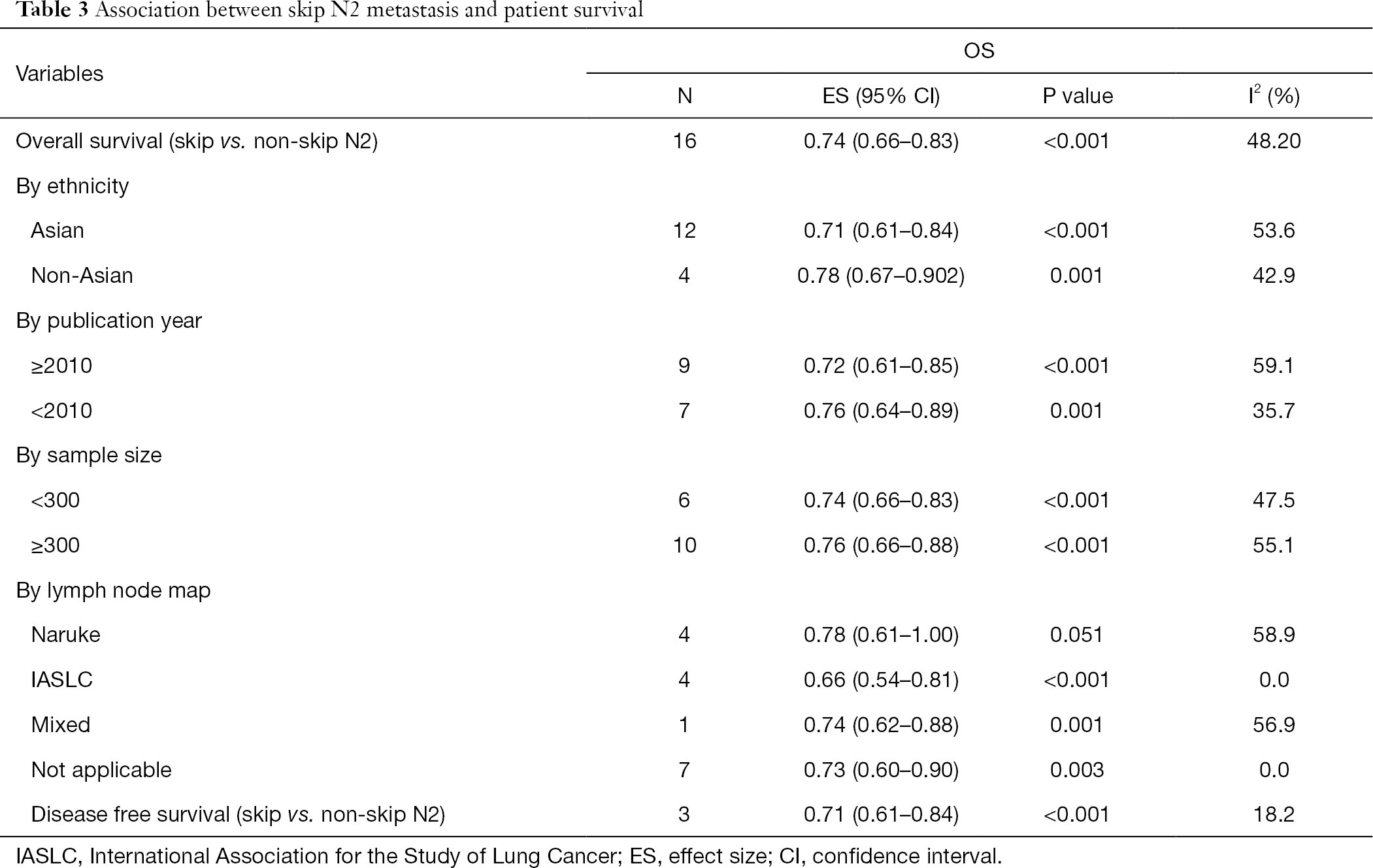 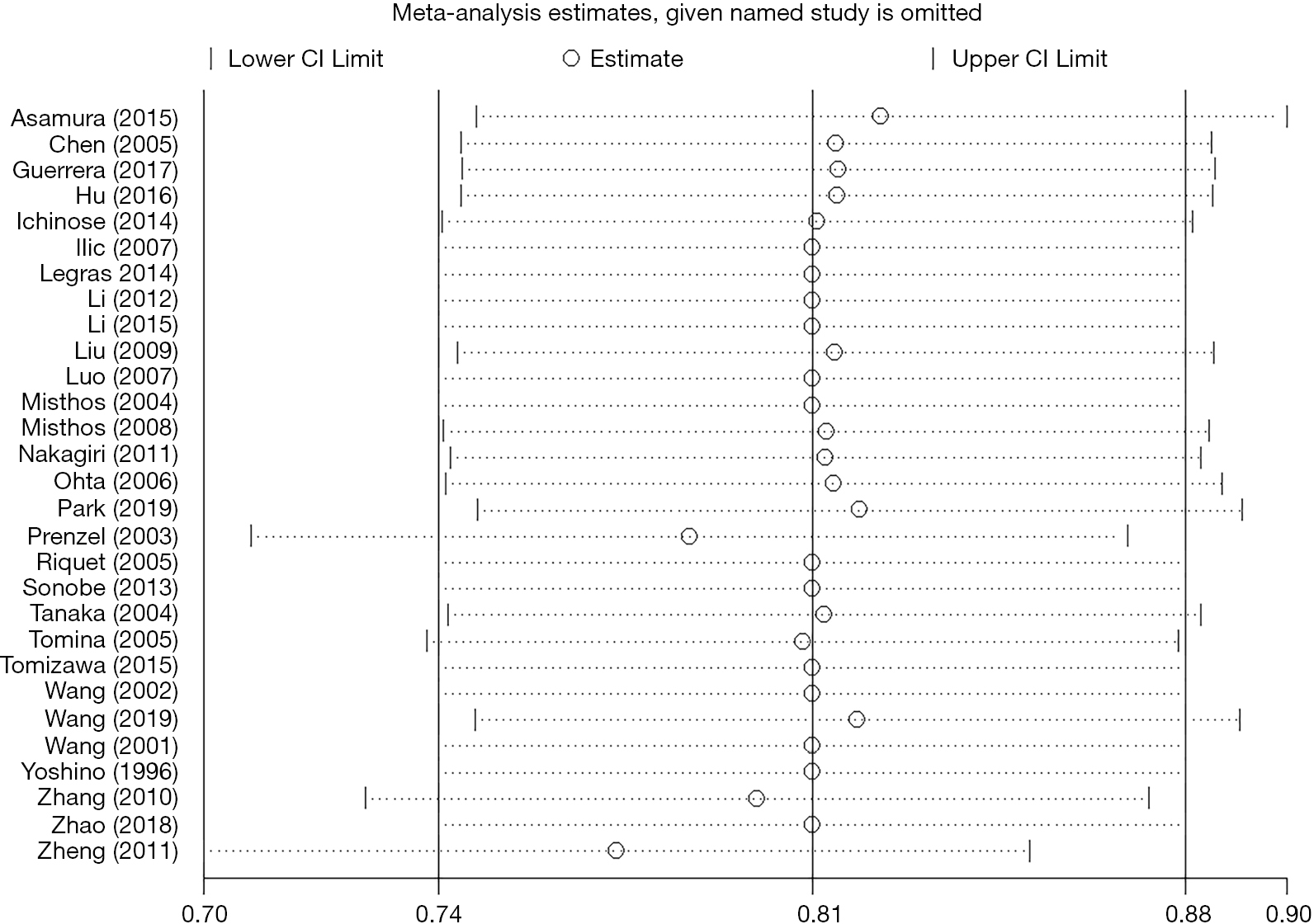 Overall description of our findings

The definition of skip metastasis was further developed, representing only one station in mediastinum without the involvement of N1. Asamura and colleagues (2) observed a significantly favorable prognosis in single-station skip metastatic patients compared with non-skip single station N2 but found no significant difference between skip metastatic and multi-stational N1 metastatic groups (2). This finding was further validated in a recent study with similar results (21).

The underlying reason for skip metastasis has not been fully unveiled. One possible explanation is the different metastatic pattern in patients with skip metastasis. Previous works proved the existence of specific subpleural lymphatic drainage pathways that can directly connect to the mediastinum (22). About 23.6% of patients with lung cancer have direct lymph node drainage pathways to the mediastinum (23). These shortcuts have higher tendency to occur in the upper lobes rather than in the lower lobes. This finding correlates with our results of the association between skip metastasis and different tumor locations (RR =1.158, P=0.044). The middle lobe was excluded in this subgroup analysis due to the limited patient number.

Based on evidence, a hypothesis was made that skip metastasis may have similar tumor burden as some N1 subgroup. The survival outcome among patients with multi-station N1, skip N2 metastasis, and non-skip single N2 also reinforced this hypothesis (2,21). In the study of Zhang et al., a different response rate was observed when using post-operative radiotherapy between patients with skip and non-skip N2 (16). This finding also indicated that a different invasive stage might exist in the two groups of patients. However, further prospective and high-level evidence is warranted in this field.

In some centers, intrapulmonary nodes are detected by pathologists to define the disease lymphatic invasion status, which may lead to insufficient staging (6). To better define patients with skip N2 metastasis, surgeons should consider performing intrapulmonary node dissection to promote anatomic recognition of specimens and location of foci. Toward this goal, a standard intrapulmonary lymph node retrieval procedure would be a useful addition to the existing protocol (27).

Some studies compared the relationship between clinicopathologic factors and skip metastasis. Tanaka et al. reported a higher rate of skip metastasis in lung squamous carcinoma while Guerrera et al. observed a higher incidence of skip metastasis in patients with EGFR mutation (8,28). A previous article concluded that tumor location, histological type and tumor size were significant factors for skip metastasis (7). No significant difference was reported in patients underwent Video assisted thoracic surgery or thoracotomy in another work (29). According to our study, lung squamous carcinoma tended toward increased skip N2 metastases compared with adenocarcinoma. Factors such as differentiation, pleural invasion, smoking status or tumor diameter were not correlated with skip metastasis in our results. The occurrence of skip metastasis was also examined. Skip occurred in stations 3 [while 3A is rarely seen (30)] and 4 in right upper lobe tumor while in station 5 and 6 in left upper lobe lesion. In both lower lobe foci group, station 7 was the most frequently influenced station according to previous studies (25). The existence of metastasis in stations 4 and 7 is prevalent in patients with positive mediastinal lymph node (31). Thus, mediastinal lymph node dissection would require additional care in the above stations under the nodal station anatomy (32) even if no N1 station metastasis was found.

According to previous articles and our results, skip N2 metastasis could be a favorable prognostic indicator among patients with N2 disease. To discover the existence of skip metastasis, we recommend a thorough dissection of intra and hilar lymph nodes by trained surgeons and pathologists. The classification of N staging needs further development. Okada et al. proposed a different borderline between N1 and N2 in lower lobe tumors (33). Different levels of intrapulmonary lymph node metastasis were also reported to be of prognostic significance (34). However, comparison between skip and non-skip single N2 patients was not conducted in our work due to the scarcity of included studies. A further subdivision of patients with lymph node metastasis is needed. Furthermore, our work validated the subclassification of N2 based on the newest IASLC staging (2).

Our study presents some limitations as well. Some included articles did not report the exact number of mediastinal lymph node retrieved. According to the proposal for 8th edition of staging, patients with N2 disease are subclassified based on the number of metastatic station (2). A direct comparison between skip metastasis and multi-stational N1 should also be conducted in future studies. Furthermore, the publication bias among the included articles should be noticed and studies based on large-scale population should be conducted to ascertain the prognostic effect of skip metastasis.

Our study demonstrated a significant favorable prognostic association between skip metastasis and overall survival and disease-free survival among patients with N2 disease. Intrapulmonary lymph node retrieval should be validated more carefully. Some uncertainties regarding the significance and role of skip metastases remain unresolved, and further studies are warranted to unveil the underlying mechanism.

We want to give our sincere thanks to Prof. Edgar G. Engleman and KG support for the help with English language editing of the manuscript.

Reporting Checklist: The authors have completed the PRISMA reporting checklist. Available at http://dx.doi.org/10.21037/atm-20-3513

Conflicts of Interest: All authors have completed the ICMJE uniform disclosure form (available at http://dx.doi.org/10.21037/atm-20-3513). The authors have no conflicts of interest to declare.