Atrial fibrillation (AF) is the most common clinical arrhythmia, and the likelihood of its incidence increases gradually with age. According to the latest management guidelines, AF treatment should be based on an assessment of bleeding and stroke risk (1). Oral anticoagulants are used to prevent thrombosis in AF patients (2), whereas dual antiplatelet therapy (DAPT) is usually recommended for patients undergoing percutaneous coronary intervention (PCI) (3,4). However, an unavoidable practical problem is that approximately one-third of patients with AF also have concomitant coronary heart disease, which requires stent implantation. For AF patients with a high risk of thrombosis after stent implantation, a triple antithrombotic strategy combining oral anticoagulation and DAPT is recommended, although this strategy can result in a higher risk of bleeding compared to dual therapy or DAPT alone (5-7). This combined treatment strategy is still controversial for these patients. Therefore, it is necessary to find novel assessment methods for the early identification of patients at high risk of bleeding.

Nomograms are accurate tools for predicting disease or complication risk (16-18). In a recent clinical study on AF, the authors constructed a nomogram model to predict the event-free survival of AF patients before cardiac resynchronization therapy (19). In this study, our predictive nomogram was based on readily available clinical data, and we carried out least absolute shrinkage and selection operator (LASSO) regression analysis to aid in the selection of the best variables. Our aim was to provide a tool for determining personalized post-discharge treatment strategies for patients.

We present the following article in accordance with the STROBE reporting checklist (available at http://dx.doi.org/10.21037/atm-20-3971).

This retrospective study included AF patients from Shanghai Tongji Hospital between May 2012 and September 2016. The patient inclusion criteria were as follows: aged greater than 18 years old, diagnosis of non-valvular AF before hospitalization, and drug-eluting stent implantation during hospitalization. The exclusion criteria were as follows: aged less than 18 years old, bioprosthetic or mechanical heart valves, and incomplete clinical information. AF was diagnosed if the standard 12-lead electrocardiogram (ECG) recording or single-lead ECG tracing ≥30 seconds had unrecognized P-wave and irregular R-R interval (indicating atrioventricular conduction was not impaired). Non-valvular AF could be paroxysmal, persistent, or permanent, except for AF which was secondary to a reversible disease. Coronary angiography and stent implantation were performed via the radial or femoral arteries, and all stents were drug-eluting stents. The choice to use combined antithrombotic therapy after stent implantation was at the discretion of the treating physician. This study was performed in accordance with the Declaration of Helsinki (as revised in 2013). The Shanghai Tongji Hospital Institutional Review Board (IRB) approved the study (approval ID: 2018YYS093), and all patients signed written informed consent before enrollment.

The dataset included demographics, comorbidities, medication strategies, arterial access, and laboratory examinations. Baseline variables were collected from the medical database before stent implantation. Data on anticoagulant drugs, including warfarin and low-molecular-weight heparin, were calculated based on whether they were used. Data on antiplatelet drugs, including aspirin and clopidogrel, were calculated by the numbers used by patients. Liver dysfunction was defined as alanine aminotransferase exceeding 3 times the normal limit value. Renal dysfunction was defined as an estimated glomerular filtration rate (eGFR) <30 mL/min/1.73 m2 or dialysis treatment. Anemia was defined as hemoglobin below 10 g/dL, and thrombocytopenia was defined as a platelet count below 100,000/µL. Bleeding events were defined as any fatal bleeding, including intracranial hemorrhage, intrapericardial hemorrhage, hypovolemic shock/severe hypotension caused by surgical bleeding, a drop in hemoglobin ≥3 g/dL, or an infusion of at least 2 units of red blood cells.

Statistical analyses were carried out using R software (version 3.6.1; http://www.R-project.org, R Foundation for Statistical Computing, Vienna, Austria) and the Statistical Package for the Social Sciences (SPSS) 22.0 (SPSS Inc., Armonk, NY, USA). Categorical data are presented as frequencies. Dichotomous variables were compared using the chi-square test or Fisher’s exact test. Continuous variables are reported as mean ± standard deviation. Differences in continuous variables were compared by the Mann-Whitney U test. The optimal variables for predicting bleeding risk in patients with AF after stent implantation were selected by the LASSO method (20). Non-zero coefficient variables were chosen in the LASSO regression model (21). A prediction model was established using multivariable logistic regression analysis and the combination of the chosen variables. The rms package was used to construct a nomogram based on the logistic regression analysis results. All key predictors were used to construct the predictive nomogram (22), and its efficiency was evaluated using the concordance index (C-index) and a calibration chart. The C-index was used to measure the goodness-of-fit of the model, and a C-index >0.7 indicated that the predictive model was a good fit. Internal validation was performed via a calibration chart with 1,000 bootstrapped resamples. The clinical efficacy of the nomogram for predicting bleeding risk was determined by identifying the net benefit under different threshold probabilities and performing decision-curve analysis (23). Net benefit was calculated by subtracting the proportion of false positives from the proportions of true positives and equilibrating the relative risk of giving up interference against the adverse effects of needless interference (24). The bootstrap method (1,000 resampling) was used for internal verification to avoid potential overfitting, and then a corrected C-index was calculated, which showed that our nomogram model would be useful for predicting bleeding risk. A risk-scoring system was constructed based on the nomogram, and the total scores of all patients were calculated. The bleeding risks of the patients were evaluated according to their different scores. 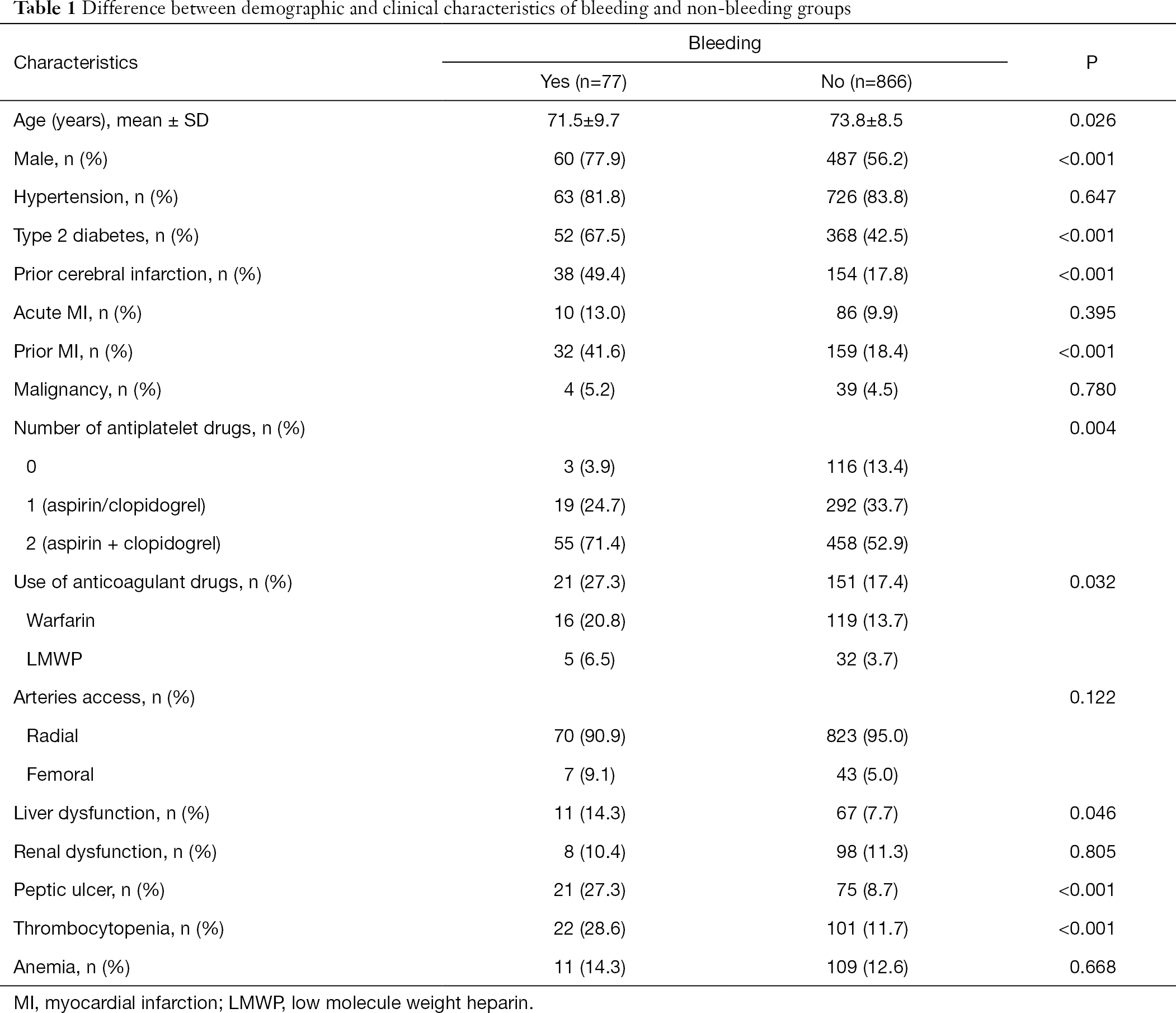 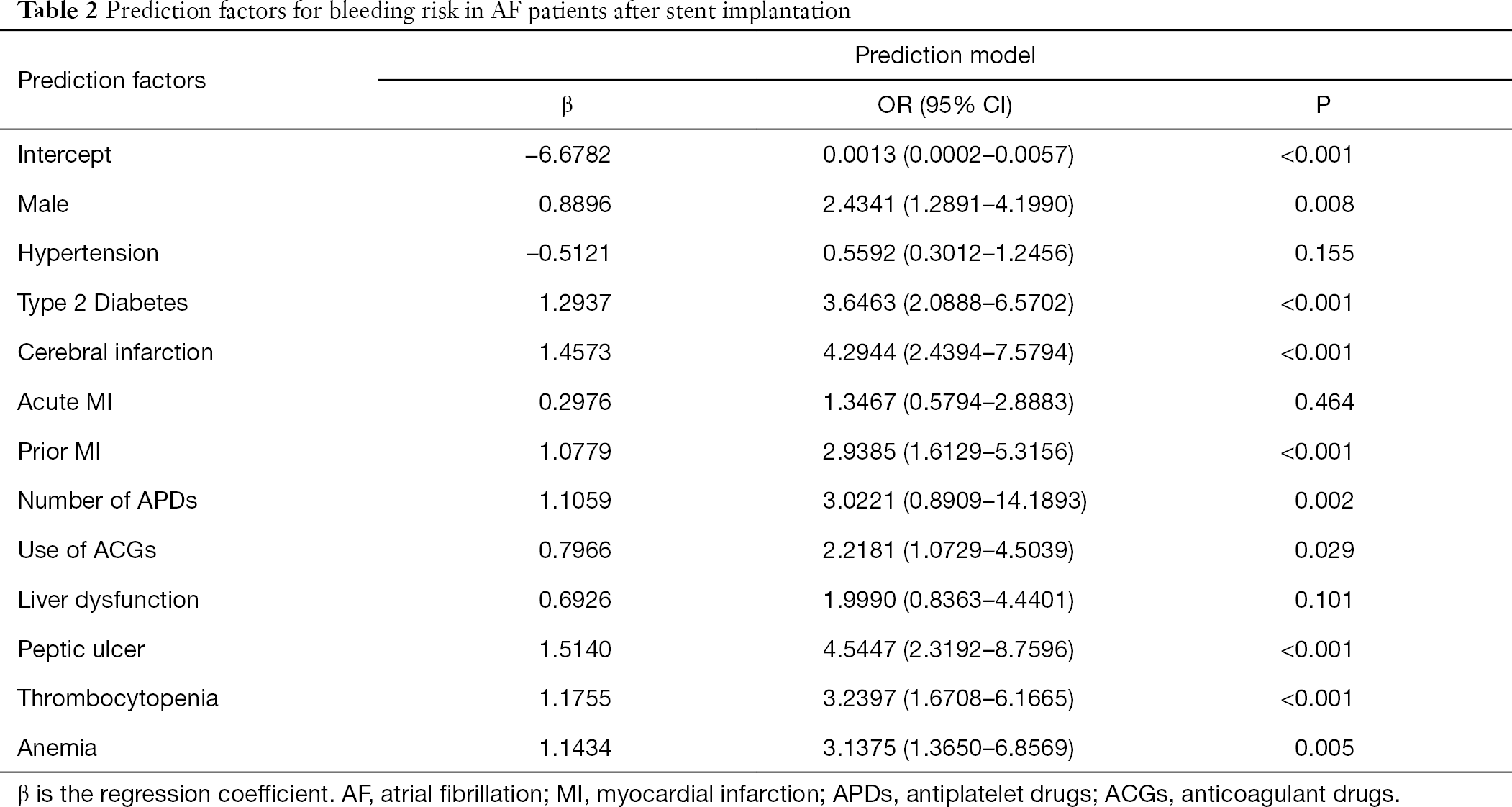 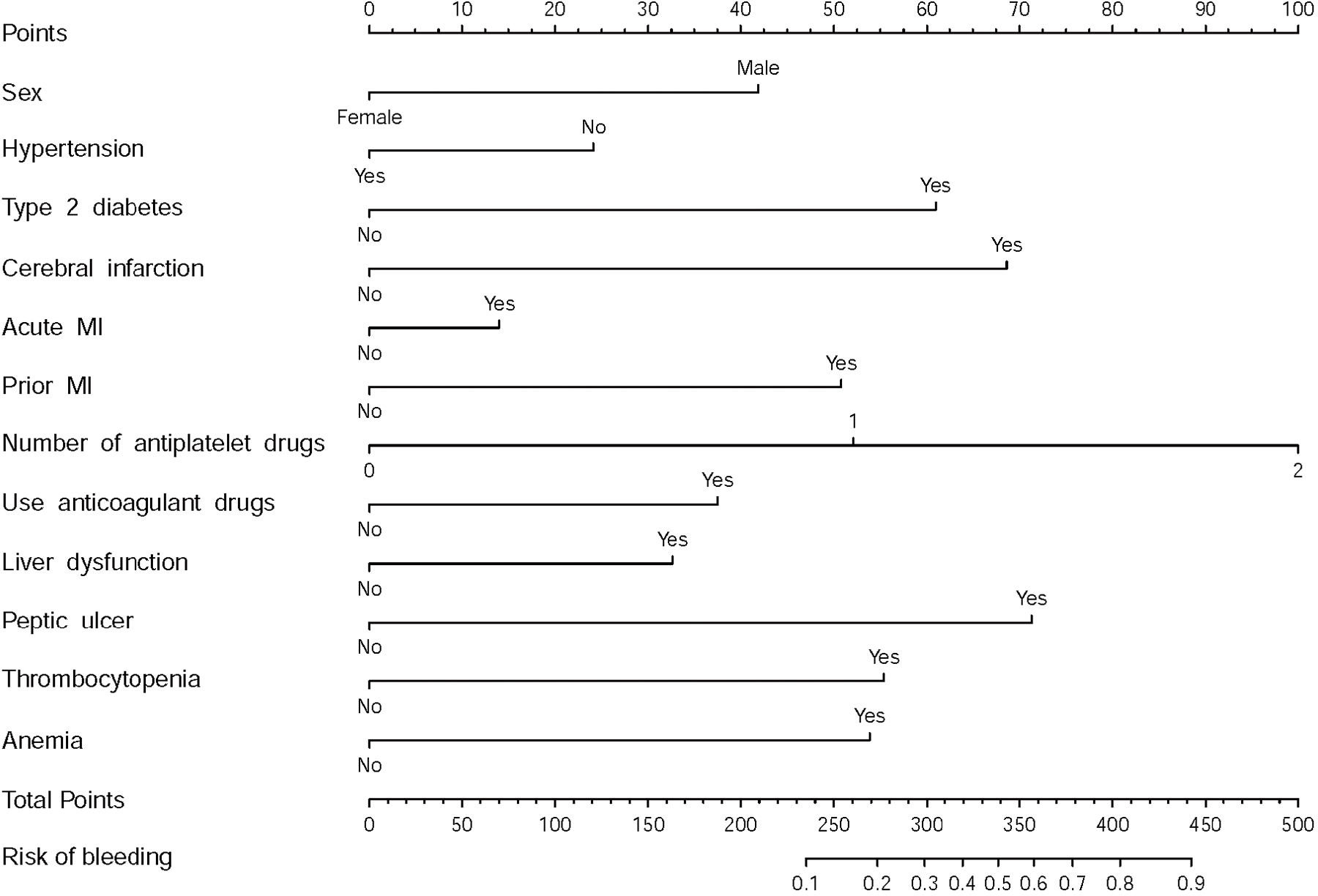 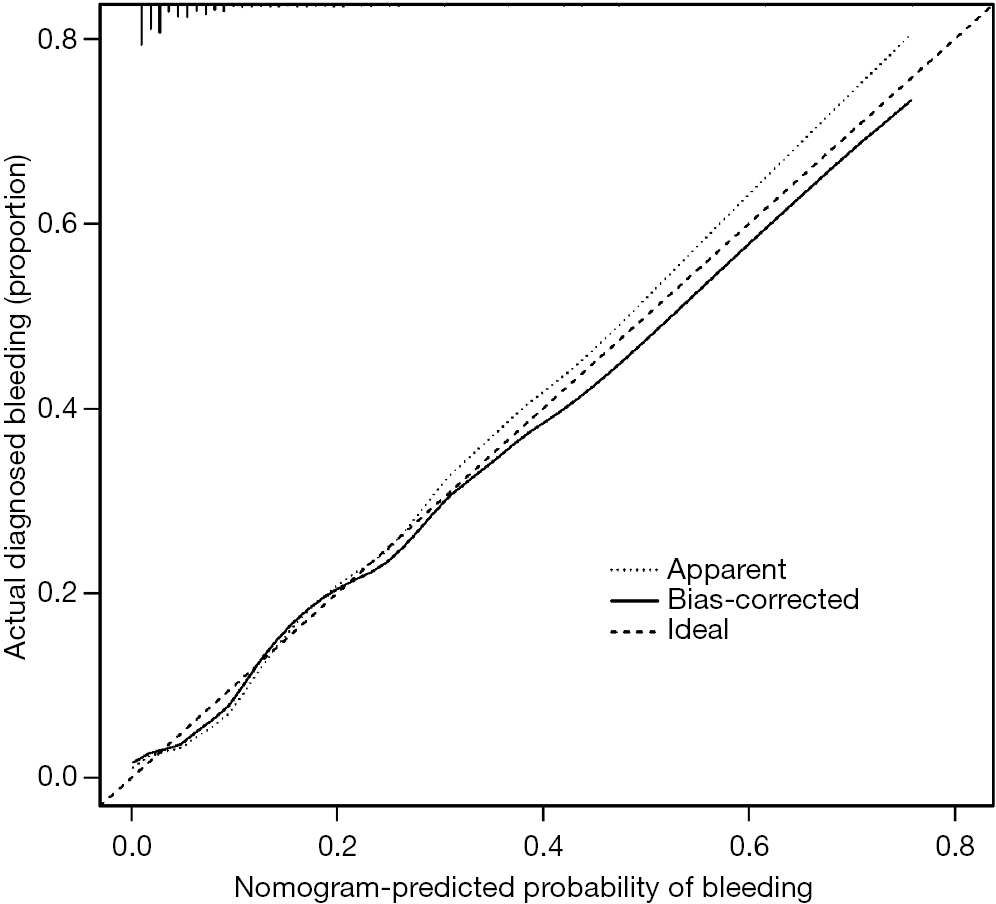 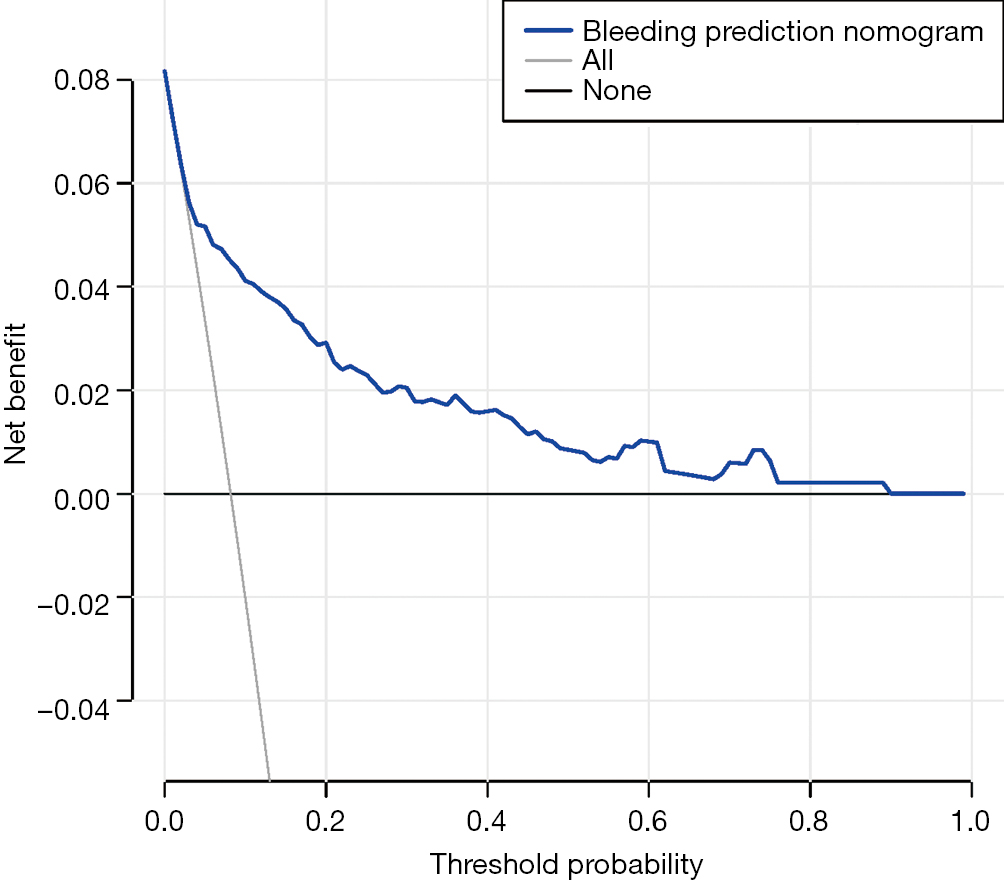 Overall, the prediction of bleeding risk is complicated, although many clinically important determinants were incorporated into the low C-index in the initial studies (10,13). This nomogram demonstrated that sex (male), type 2 diabetes, cerebral infarction, acute myocardial infarction, prior myocardial infarction, hypertension, a greater number of antiplatelet drugs, use of anticoagulant drugs, liver dysfunction, peptic ulcer, thrombocytopenia, and anemia were the key predictors of bleeding in AF patients after stent implantation. Different access to the radial and femoral arteries did not affect bleeding risk. The selection of the 12 key predictors was based on the LASSO regression model, which is a compressed estimation method used to reduce the variable set (order reduction). By constructing a penalty function, it can compress the coefficients of variables and transform some regression coefficients to 0 to achieve the purpose of selecting variables. The recognition of bleeding events is based on the nomogram-scoring algorithm. As shown in Figure 2, the corresponding features of each patient are substituted into the nomogram to calculate the score of each feature. Finally, all the scores are added together, and the total score corresponds to the bleeding risk in the last row; thereby, the bleeding risk of the patient can be evaluated.

Previous studies have generally focused on the number of antithrombotic drugs, suggesting that they significantly increase the risk of bleeding in AF patients after stent implantation (31-33), which was further confirmed by this study. An increasing number of studies have also confirmed that the combination of 2 antithrombotic drugs can be more effective in reducing bleeding risk without increasing adverse events (34-36). In this study, we included more clinical factors for better prediction of the bleeding risk in patients. Previous studies have shown that patients with recent or prior myocardial infarction and cerebral infarction have significantly increased bleeding risk (37,38). This is also in agreement with our results and might be related to the increased number of antithrombotic drugs combined with these diseases.

In this study, we also found that sex (male), type 2 diabetes, peptic ulcer, thrombocytopenia, and anemia were independent predictors of bleeding risk, which was consistent with previous research (3,10,14,38). However, in contrast to previous studies (30,38), we identified liver dysfunction, but not renal insufficiency, as a risk factor for bleeding. This could be because only the bleeding events occurring within a few days of stent implantation were counted, whereas liver dysfunction might have a greater impact on acute bleeding events. Overall, this study provides a novel and easy-to-use tool to predict the risk of bleeding more accurately in AF patients after stent implantation, which is of great significance for reducing the incidence of bleeding events in patients. Internal validation in this group indicated that the nomogram had good identification and calibration ability, and the high C-index in internal validation suggests that the nomogram has robust clinical utility.

This study has a few limitations. First, the retrospective design may only represent a small number of AF patients who underwent drug-eluting stent implantation in China. Second, we only validated our results by internal validation but not in a broad external population, which might have led to an overestimation of the nomogram’s performance. Third, we counted recent bleeding events that occurred during hospitalization, which might have resulted in bias or missing results.

Our novel nomogram can be used to predict the bleeding risk of AF patients more accurately after stent implantation during hospitalization. Our data suggests that patients with multiple complications and those using triple antithrombotic drugs have a higher risk of bleeding. By using this model to predict the risk of bleeding in AF patients, it is possible to reduce the bleeding risk in AF patients after stent implantation and provide guidance for subsequent medication and treatment strategies.

Reporting Checklist: The authors have completed the STROBE reporting checklist. Available at http://dx.doi.org/10.21037/atm-20-3971

Conflicts of Interest: All authors have completed the ICMJE uniform disclosure form (available at http://dx.doi.org/10.21037/atm-20-3971). The authors have no conflicts of interest to declare.

Ethical Statement: The authors are accountable for all aspects of the work in ensuring that questions related to the accuracy or integrity of any part of the work are appropriately investigated and resolved. This study was in line with the Declaration of Helsinki (as revised in 2013). The Shanghai Tongji Hospital Institutional Review Board (IRB) approved the study (approval ID: 2018YYS093), and all patients signed written informed consent before enrollment.