Primary colorectal sarcoma is an extremely rare disease which accounts for approximately 0.1% of all colorectal malignancies (1). Even among soft tissue sarcoma (STS) cases, this disease constitutes less than 1% of all adult maligancies of this type (2). More than 50 histological subtypes of STS exist, and of these, pleomorphic undifferentiated sarcoma is the most common subtype found in the extremities, while liposarcoma is the most common subtype found in the retroperitoneum (2). However, previous studies have demonstrated that leiomyosarcoma is the most common histologic type of colorectal sarcoma (3). Although excising tissue may damage some bodily functions (4), R0 surgery is still the most effective method for managing STS. Radiotherapy and chemotherapy are vital adjuvant management methods for incompletely resected sarcomas or for postoperative residual sarcomas (5-7). However, surgery is still the preferred treatment for colorectal sarcoma, while the use of chemoradiotherapy for this malignancy remains controversial (8).

Primary colorectal sarcoma is a subgroup of gastrointestinal tumors. While the incidence of primary colorectal sarcoma is lower than that of colorectal adenocarcinoma, it has higher mortality, regardless of tumor location, tumor grade, lymph node invasion, or other factors (8). Interestingly, as gastrointestinal stromal tumors (GISTs) originate in Cajal cells, they are not considered to be colorectal sarcomas, which generally originate in smooth muscle and adipose cells present in mesenchymal tissue (9,10). Because the tyrosine kinase receptor, cKIT, is overexpressed in GISTs, it is possible to target this disease with chemotherapy drugs such as imatinib. However, it is unclear what genetic mutations occur in colorectal sarcoma, and this disease is resistant to chemotherapy (11,12).

Studies have shown that age, tumor location, histologic subtype, grade and lymph node status are associated with the presence and persistence of other sarcomas, such as retroperitoneal sarcoma (13,14). Similarly, age, tumor location and surgery are also significantly associated with overall survival (OS) and cancer-specific survival (CSS) in patients with GISTs (15). Negative lymph node (NLN) resection is associated with improved survival in colorectal cancer patients of all stages (16). Additionally, extended negative lymphadenectomy can improve disease-free survival (DFS), CSS, and OS in node-positive colorectal cancer patients. However, the relationship between these prognostic factors and colorectal sarcomas is unclear. Furthermore, research into colorectal sarcoma is limited due to the rarity of this malignancy, as only a small number of patients present in medical centers, and the case reports that do exist contain limited data.

The aim of the current study was thus to identify the prognostic factors of primary colorectal sarcoma and evaluate the clinical outcomes associated with these prognostic factors using multicenter data obtained from the Surveillance, Epidemiology, and End Results (SEER) database.

We present the following article in accordance with the STROBE reporting checklist (available at http://dx.doi.org/10.21037/atm-20-4286).

Continuous data are presented as median and interquartile range (IQR), and categorical data are presented as frequency and percentage. Chi-square tests were used to compare the statistical significance of samples between different variables. CSS was analyzed using the Kaplan-Meier method and log-rank tests were used for comparisons between two groups. Univariate Cox proportional hazards regression analysis was performed for various risk factors using the above methods. Only variables shown to be statistically different through univariate Cox regression analysis were included in multivariate Cox regression analysis to identify the independent prognostic factors and estimate the hazard ratio (HR) and 95% confidence interval (CI) of covariates. The effect of independent factors on survival were further analyzed. Then, data were analyzed using X-tile software (version 3.6.1) to identify the cutoff value for NLN count, and the cohort was then divided into high and low survival groups. The cutoff value was validated by univariate Cox regression analysis. A P value of <0.05 was considered to indicate statistical significance. All statistical analyses were performed using IBM SPSS Statistics 22.0 for R (version 3.6.2).

After the exclusion of patients who did not meet the criteria, 315 patients with primary colorectal sarcoma between 2000 and 2016 were identified from 16 registries within the SEER database (Figure 1). Of these patients, 279 (88.6%) received surgery, and their median age was 64 with an IQR of 53–75. The median follow-up time in the surgery group was 34 months with an IQR of 9–79 months. Univariate Cox proportional hazards regression analysis demonstrated that CSS improved with surgery (HR 0.199; 95% CI: 0.117–0.337; P<0.001). The 5-year CSS rates were 76.73% and 27.8% for the surgery group and the non-surgery group, respectively (Figure 2A). The baseline characteristics of all eligible patients are listed in Table 1. Over half the patients (76.3%) in the surgery group had colonic tumors and the remainder (23.7%) had rectal tumors. Leiomyosarcoma (68.6% of tumors in the surgery group) and grade IV were the most common histologic type and grade of tumor, respectively. Among the 279 patients who received surgery, 28 patients (10.0%) were diagnosed with positive lymph nodes. No statistical difference in CSS rate was found between positive and negative lymph node status (Figure 2B). 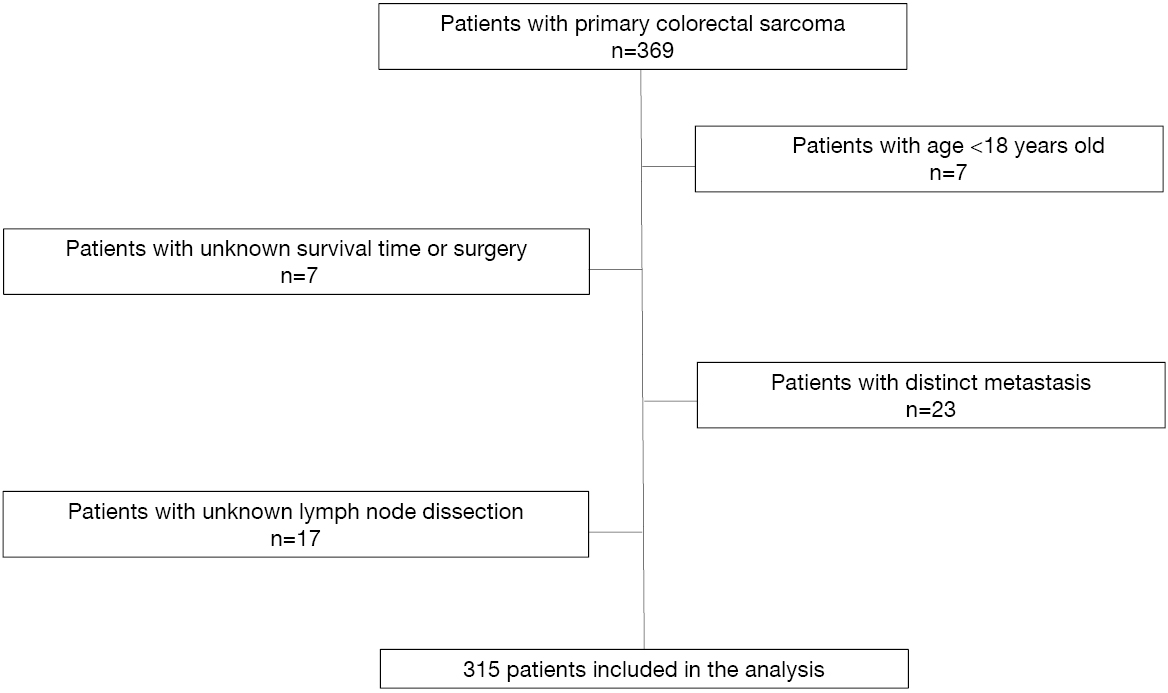 Figure 1 Flow diagram of the selection of patients with primary colorectal sarcoma from the Surveillance, Epidemiology, and End Results database.

Figure 2 Kaplan-Meier cancer-specific survival curve of surgery (A) and lymph node status (B) for all patients with primary colorectal sarcoma. 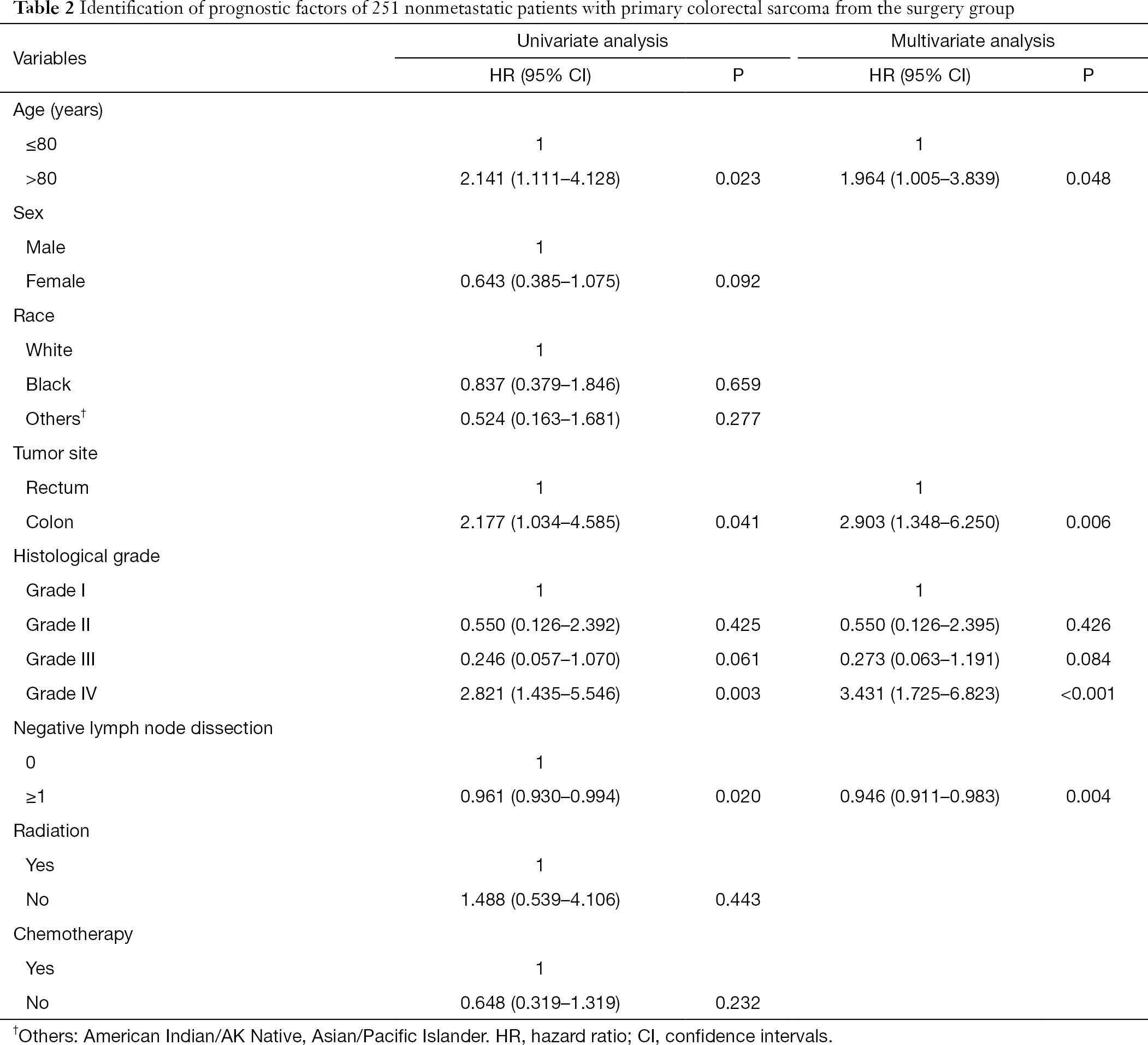 Figure 3 Survival curves for cancer-specific survival in nonmetastatic patients with primary colorectal sarcoma, as stratified by (A) radiotherapy, (B) chemotherapy. 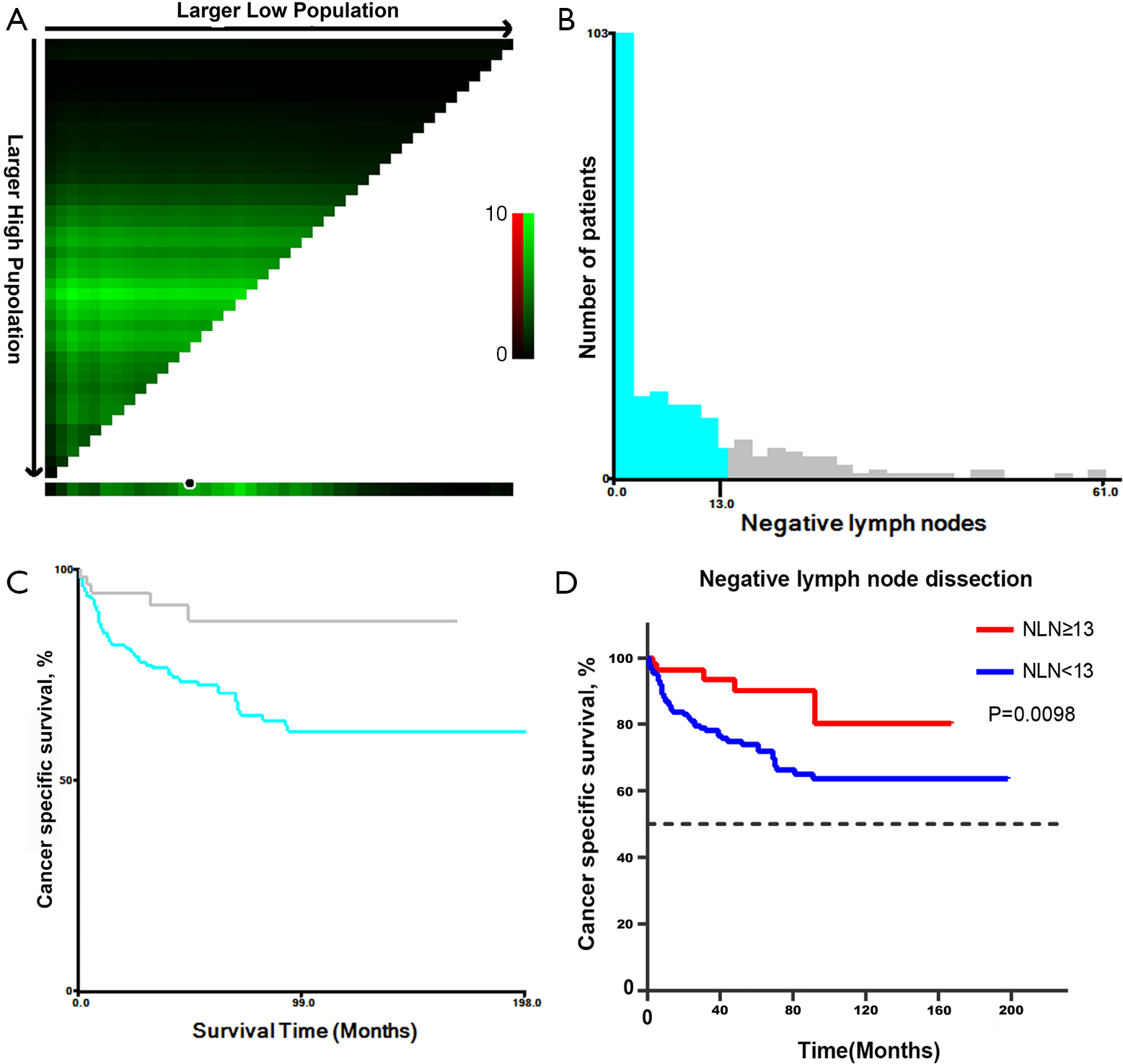 Primary colorectal sarcoma is a rare malignancy. Its features and heterogeneity have yet to be fully described, and it is vital to identify those factors associated with better survival outcomes in order to reduce its mortality rate. In the current study, patients were found to have primary colorectal sarcomas of various histologic types, with leiomyosarcoma being predominant and accounting for over 50% of the cases. In contrast, liposarcoma has been shown to be the predominant type of retroperitoneal sarcoma, followed by leiomyosarcoma (17). The SEER database does not have data on the stage of colorectal sarcoma as determined by the American Joint Committee on Cancer (AJCC) or by any other authority; therefore, the patients’ lymph node and metastatic status were determined by regional nodes examined and metastatic organs, which are available from the SEER database. Similarly, previous literature has not typically reported AJCC tumor-node-metastasis (TNM) staging for primary colorectal sarcoma, which is the most prevalent staging system used for STS but is not widely used for non-extremity sarcomas (3,8,18). However, a recent study has reported new TNM classifications (AJCC 8th edition) for STS of visceral sites (19,20). Therefore, detailed information to describe the histological stages of sarcomas should be recorded to improve follow-up treatment and to benefit future research.

Surgery is the predominant and most effective therapy for primary colorectal sarcoma; examples of these surgeries include radical resection and local excision or destruction (21). One study that analyzed a primary colorectal sarcoma dataset from the National Cancer Database (NCDB) that was collected between 1998 and 2012 showed that the 5-year overall survival (OS) was 43.8%, and this figure included a 10.6% portion of patients who did not undergo surgery (8). The 5-year CSS rate for patients in this study who received surgery was over 70%, which was far greater than that of the non-surgery patients. Surgery was therefore shown to be an effective treatment that significantly improved CSS. Regional lymph node metastasis of sarcomas such as embryonal rhabdomyosarcoma, angiosarcoma, epithelioid sarcoma, and clear cell sarcoma occurs in a significant proportion of cases (22). Unfortunately, few examples of these histological types were included in the current study of colorectal sarcoma. In another study, patients with undifferentiated sarcomas had a high rate of positive regional lymph nodes and poor clinical prognosis (23). However, our study found no difference in CSS between patients with positive lymph nodes and those with negative lymph nodes. The result was possibly impacted by the low proportion (only 10%) of participating patients with positive lymph nodes and high proportion (more than 60%) of patients receiving an NLN dissection. Therefore, we speculate that patient survival may be affected by NLN dissection.

The current study further investigated the association between NLN dissection and prognosis. Our findings indicate that age, tumor site, tumor grade, and NLN dissection were independent prognostic factors for CSS in nonmetastatic patients. Colonic sarcoma patients had worse survival outcomes than patients with rectal sarcoma. Colon and rectal cancer are well known to be related but distinct, with disease affecting the right side of the colon even producing different clinical outcomes to left-sided disease. Some reports have indicated that patients with colon cancer have a worse prognosis than those with rectal cancer, and that patients with right-sided colon cancer have a worse prognosis compared to those with left-sided colon cancer (24,25). These discrepancies may be caused by the different embryonic origins and genetic profiles that account for distinct carcinogenesis and biological behavior (26-28). The results of our study indicated that nonmetastatic patients can benefit from lymphadenectomy of the NLN following primary tumor surgery. According to previous research, NLN count at the time of lymphadenectomy may have a distinct effect on patient survival (27-29). Therefore, in the current study, the optimal cutoff value for NLN count was identified using X-tile software, which has been used in other studies (29,30). These results found the optimal cutoff value for NLN count to be 13 in nonmetastatic patients, with patients with a count of 13 or more than 13 at NLN dissection had significantly better CSS than those with less than 13. However, NLNs cannot be removed in every situation, as an increase in lymphadenectomies can result in an increase in complications, including lymphorrhea, chylous ascites, and nerve injury (31,32).

Conversely, sex and race have no association with survival. A previous study has reported that differences in the incidence of colorectal cancer according to sex are associated with estrogen and progesterone receptors (33). However, whether sex differences in survival among colorectal sarcoma patients are associated with estrogenic receptors is unknown. Additionally, radiotherapy and chemotherapy do not improve CSS in nonmetastatic patients, but there is still variational tendency in our study. Few studies have investigated chemoradiotherapy for STS, let alone colorectal sarcoma. One study demonstrated that preoperative radiotherapy improved overall survival in patients with STS (34), while doxorubicin-based chemotherapy has been recommended as the first-line treatment for advanced and metastatic STS (35). Previously, we reported that anlotinib also demonstrated antitumor activity in STS, with a progression-free rate at 12 weeks of 75%, median progression-free survival (PFS) and overall survival of 11 months and 15 months for leiomyosarcoma, respectively (36). Finally, trabectedin has been approved for the treatment of patients with leiomyosarcoma and liposarcoma, because conventional chemotherapy is ineffective. Further study is therefore required to investigate the use of chemoradiotherapy in the treatment of colorectal sarcoma.

The limitations to the current study include its retrospective design and a dataset limited by the rarity of this disease. However, Cox proportional hazards regression analysis was used to reduce the potential for confounding. Although the histological tumor grade of some patients was unknown, the effect of tumor grade on prognosis is acknowledged by the guidelines (2). Furthermore, some factors, including tumor size and TNM stage, could not be acquired from the SEER database.

Reporting Checklist: The authors have completed the STROBE reporting checklist. Available at http://dx.doi.org/10.21037/atm-20-4286

Conflicts of Interest: All authors have completed the ICMJE uniform disclosure form (available at http://dx.doi.org/10.21037/atm-20-4286). The authors have no conflicts of interest to declare.

Ethical Statement: The authors are accountable for all aspects of the work in ensuring that questions related to the accuracy or integrity of any part of the work are appropriately investigated and resolved. The study was conducted in accordance with the Declaration of Helsinki (as revised in 2013). All data were retrieved from the public SEER database, so this study was deemed exempt from institutional review board approval.