Breast cancer is recognized as the most common female malignant tumor, and is the leading cause of death from metastasis (1). A growing number of studies have reported mutational characteristics of metastatic breast cancer (MBC), indicating genomic evolution and high tumor heterogeneity in this disease (2-7). However, useful prognostic biomarkers that could reliably pinpoint the MBC patients most likely to benefit from specific and tailored treatment have yet to be identified. A circulating tumor DNA (ctDNA) analysis of MBC with largest scale in China was undertaken in the current study, to comprehensively interpret the genomic features and reveal the prognostic relevance of somatic mutations in MBC.

Recently ctDNA assays have been used in metastatic and recurrent cancers. Given the intra-tumor heterogeneity of breast cancer, the genomic map of tissue specimens may not represent the whole tumor (8). Additionally, it is difficult to obtain tissue samples of metastatic foci in clinical practice, as MBC commonly involves other metastatic organs such as the liver, lung, bone, or brain. Recently, ctDNA has been proposed as an accurate means to identify mutations, assess tumor burden, and dynamically monitor treatment response with minimally invasive procedures (9-12). In this study, 958 blood samples of MBC were collected, ctDNA was extracted, and target capture sequencing was performed. Survival analysis was subsequently carried out to explore the prognostic relevance of somatic alterations. We present the following article in accordance with the STROBE reporting checklist (available at http://dx.doi.org/10.21037/atm-20-2137).

The study was approved by the Institutional Review Board and Human Ethics Committee of at National Cancer Center/ National Clinical Research Center for Cancer/Cancer Hospital, Chinese Academy of Medical Science and Peking Union Medical College (No. CH-BC-052). All patients provided written informed consent prior to study enrollment. The study was conducted in accordance with the Declaration of Helsinki (as revised in 2013).

A total of 958 female MBC patients were enrolled at the time of diagnosis (TNM stage: M1) between June, 2015, and August, 2019. Hormone receptor (HR), including estrogen receptor (ER), progesterone receptor (PR), and human epidermal growth factor receptor 2 (HER2) expressions were assessed by two independent pathologists in accordance with standard clinical practice.

Mutations were identified in 801 of 958 blood samples from female MBC patients, comprising 494 HR+ cases (luminal A and B), 130 HER2+ cases, and 177 triple-negative breast cancer (TNBC) cases. All patients were diagnosed at the M1 stage, and the cohort ranged in age from 22–76 years old, with a median age of 46. The involved distant organs included the lung, liver, bone, and brain. Extracted ctDNA was assayed for somatic mutations by target capture NGS with a panel of 1,021 genes. The patient’s characteristics of the identified MBC cases are summarized in Table 1. 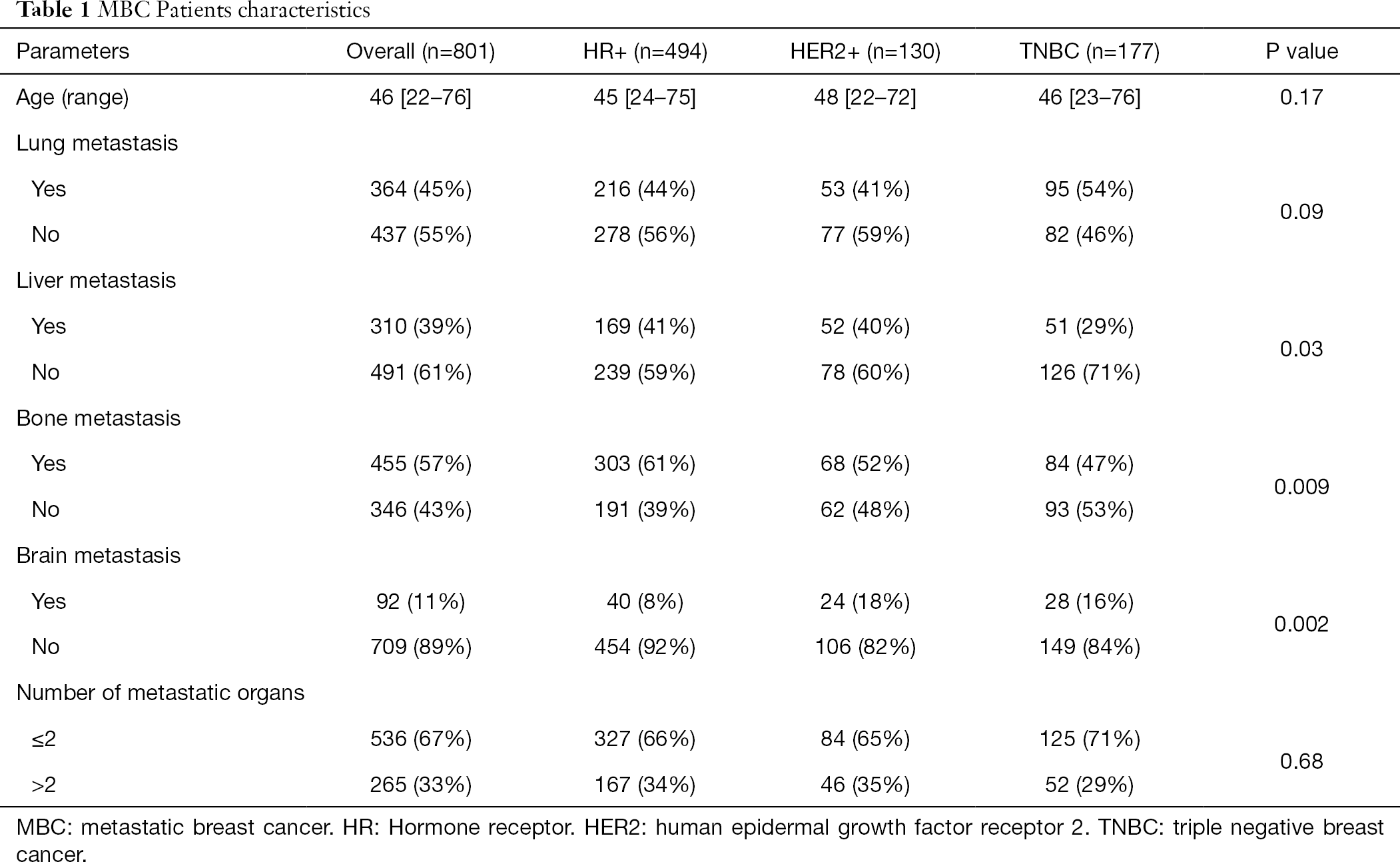 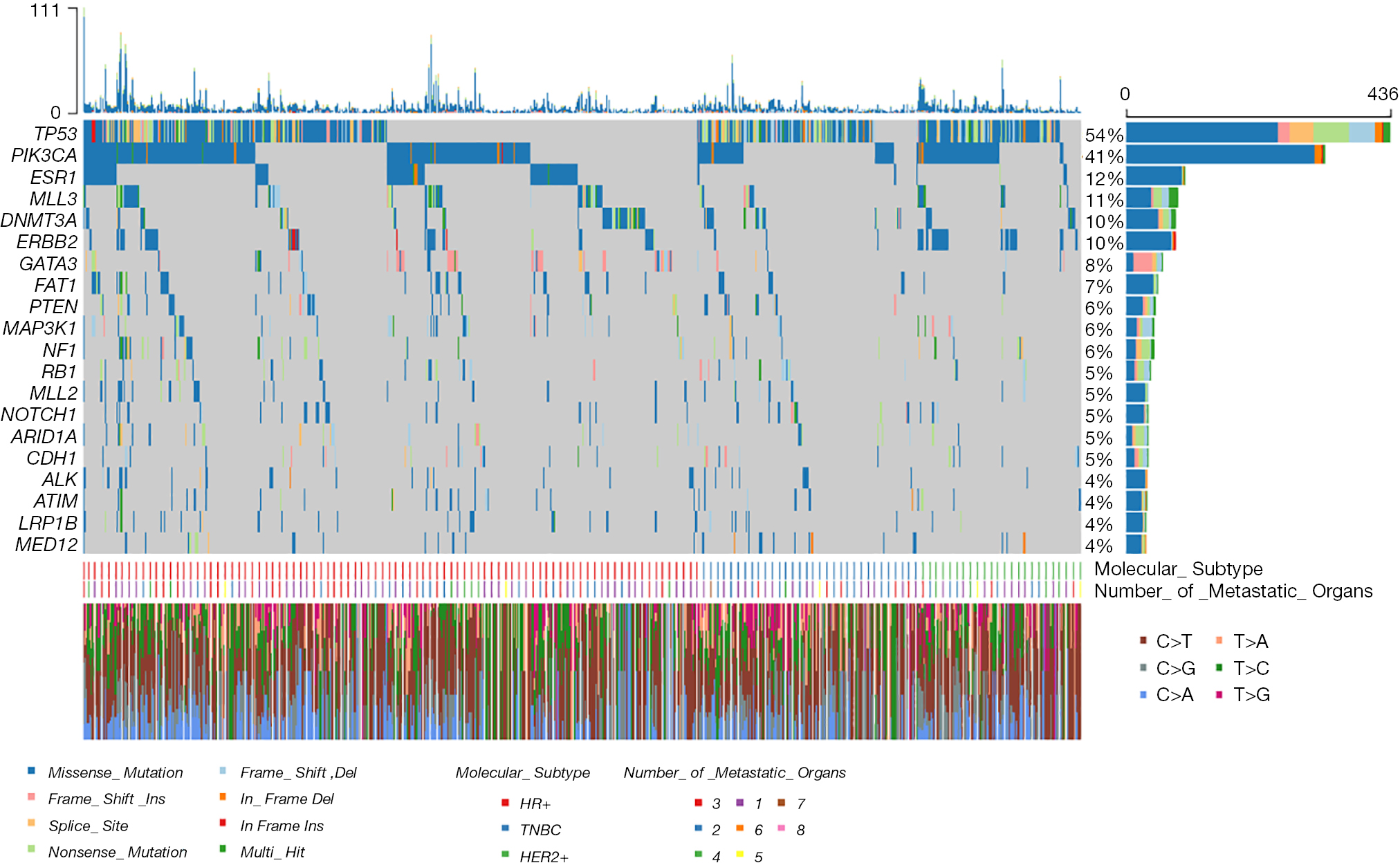 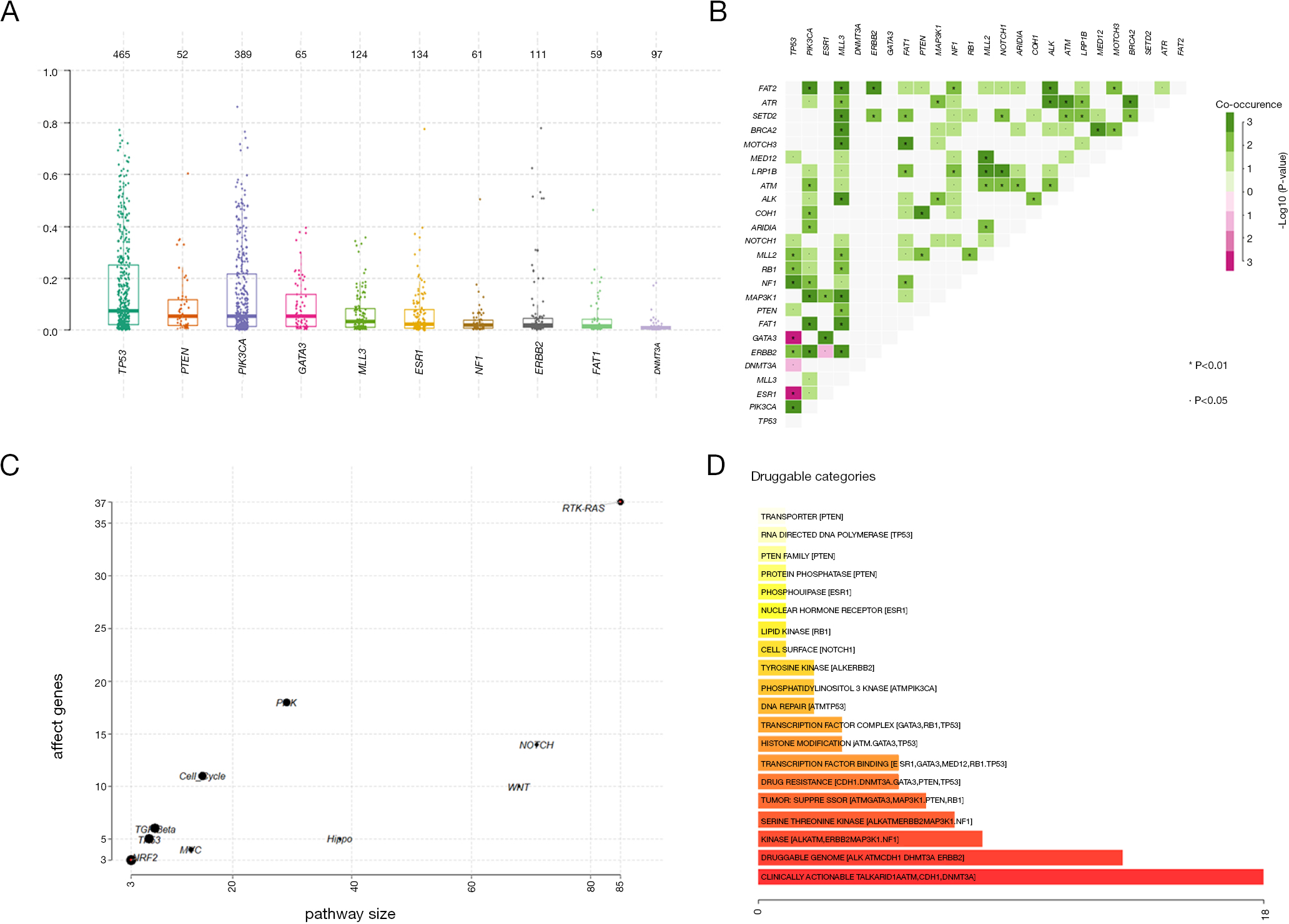 Figure 2 Mutational characteristics of MBC. (A) Top 10 mutated genes according to VAF. (B) Mutual exclusivity and co-occurrence among multiple mutations. Green and magenta dots represented co-occurrence and mutual exclusivity, respectively. The degree of significance is represented by color intensity. (C) Enrichment of known oncogenic signaling pathways. The X-axis represents the total number of genes in the pathway, and the Y-axis represents the number of affected genes in the pathway. (D) A total of 16 druggable genes were identified and classified into 20 targetable categories based on Drug Gene Interaction database. The X-axis represents the number of genes. MBC, metastatic breast cancer; VAF, Variant Allele Frequency.

In the current study (n=801), 10 differentially mutated genes of MBC (Table S1) were recognized when compared to matched NMBCs (Table S2) derived from our ctDNA dataset (n=128) (Figure 3A). Considering the important role of molecular subtypes in the diagnosis and treatment of breast cancer, we compared mutational frequencies of metastatic HR+ (n=494), HER2+ (n=130), and TNBC (n=177) subtypes. TP53, ERBB2, and MSH2 were more prevalently altered in metastatic HER2+ cases; TP53 and PIK3CA were differentially mutated in metastatic TNBCs; and ESR1 and GATA3 occurred more frequently in HR+ subtype (Figure 3B,C,D). 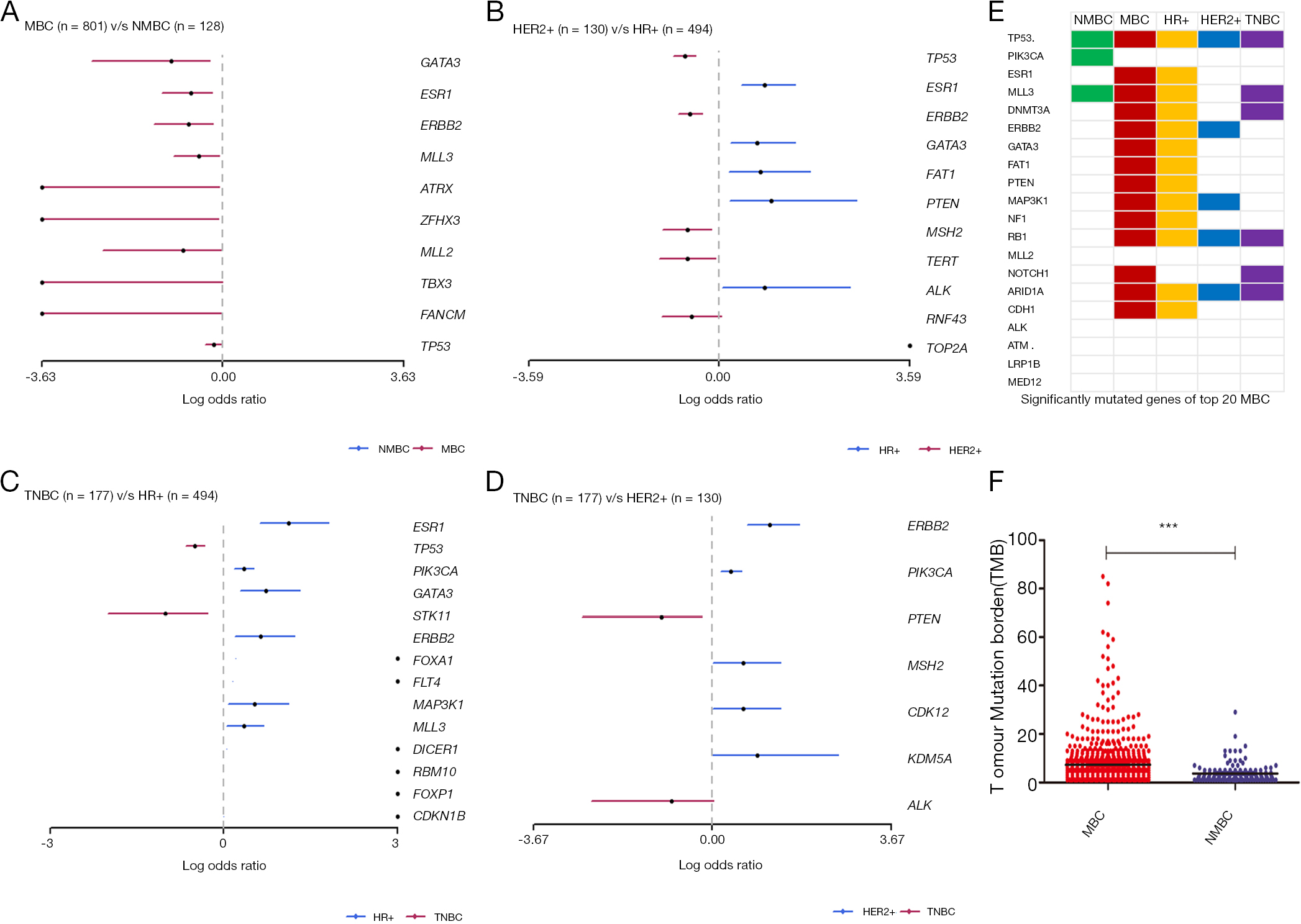 Through OncodriveFML (q<0.1), 56 driver genes were identified in MBC, with only 3 found in NMBC. Of the top 20 frequently mutated genes in MBC, 14 were interpreted as driver genes. It was found that the driving effect of PIK3CA in NMBC was not shown in MBC. Within the molecular subtypes of MBC, 52 driver genes were observed in the HR+ group, 14 in the HER2+ group, and 9 in the TNBC group. TP53, RB1, and ARID1A were shared driver genes, regardless of subtypes. ESR1, GATA3, FAT1, NF1, PTEN, and CDH1 were specific driver genes in the HR+ subtype, while NOTCH1 showed a strong correlation with TNBC cases (Figure 3E). Additionally, TMB was found to be significantly higher in MBC than NMBC (F). An association was observed between the number of metastasis and gene alterations (P=0.0003). Furthermore, a significant difference between mutational burden in lung metastasis and liver metastasis (P=0.0467) (Figure S3) was noted. Through Metascape, it was shown that different pathways were involved with different metastatic sites in MBC (Table S3). 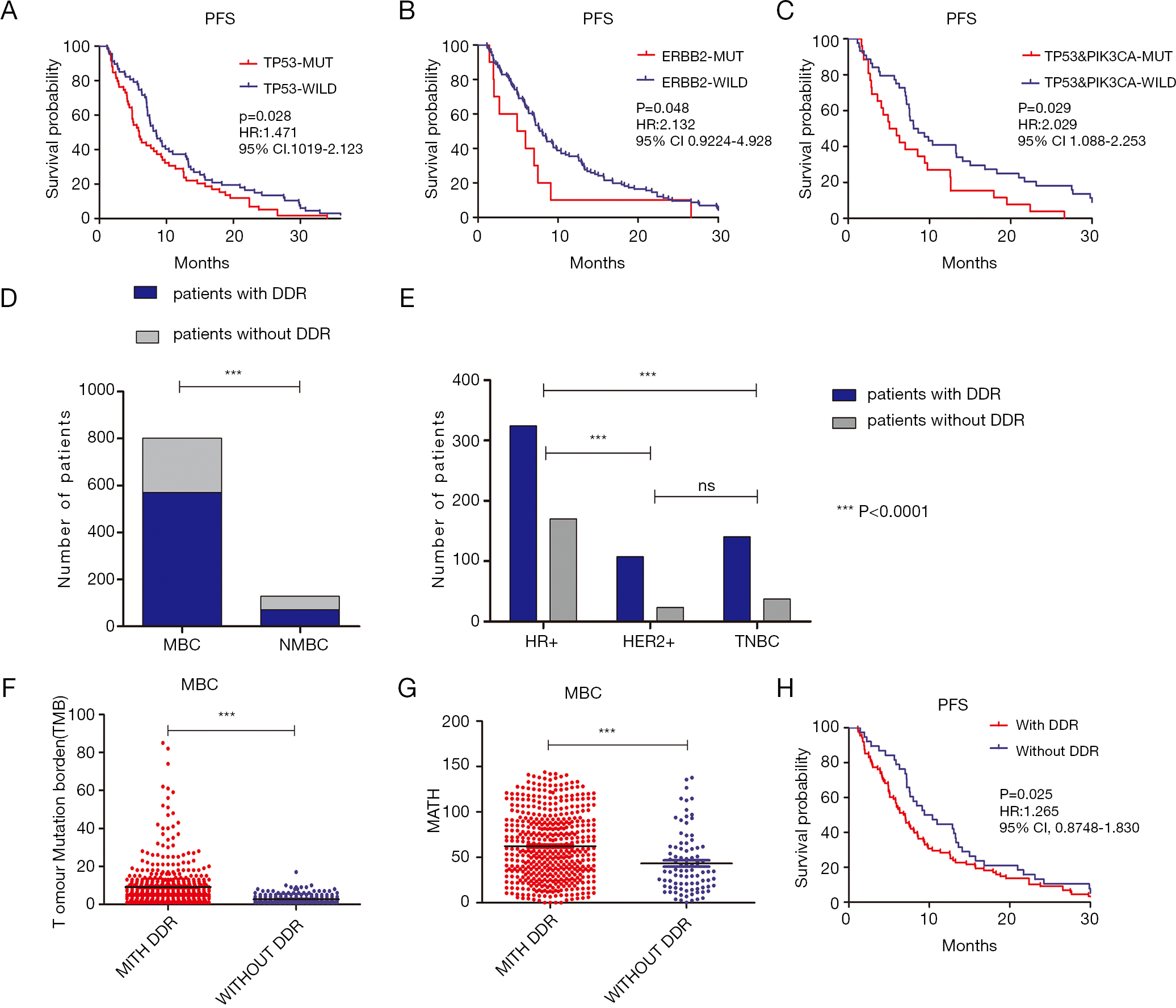 Characteristics of TMB or MATH in MBC 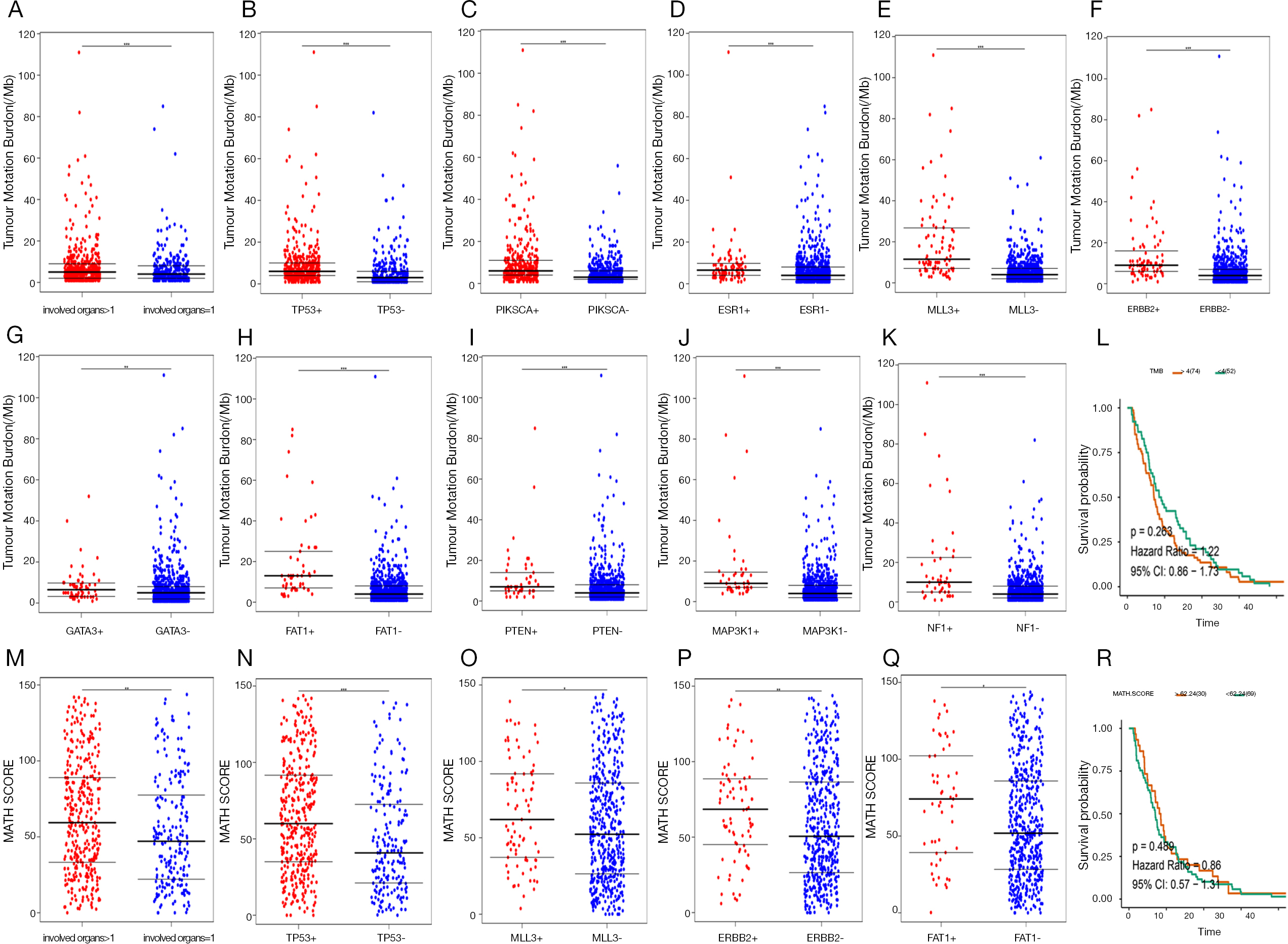 This study exploited the multiple advantages of using liquid biopsies as a means of conducting large-scale genomic profiling of MBC via ctDNA analysis. TP53 and PIK3CA alterations appeared most prevalent, followed by PTEN, which warrants attention. It has been reported that PTEN mutations frequently occur in various cancers, particularly in the breast (20) and participate in the PI3K/AKT/mTOR and P53 pathways (21). In the current study, PTEN showed significant correlation with TP53, displaying a co-existing pattern.

Based on our data, the spectrum of genes identified in MBC during the analysis was differed from NMBC, indicating an evolutionary process and tumor heterogeneity. The differentially mutated genes were reported to be strongly associated with tumor progression and poor prognosis. RB1 mutation was associated with poor outcomes in the HR+ subtype, resulting in a low response to cyclin-dependent kinase 4 (CDK4) inhibitors (6,22), thereby warranting new target therapies (23). Interestingly, this study showed RB1 to co-occur with set domain containing 2, histone lysine methyltransferase (SETD2) and MLL2. NF1, which displayed a relationship with low density lipoprotein receptor-related protein 1B (LPR1B) and FAT atypical cadherin 2 (FAT2), has also been involved in resistance to endocrine therapy (24). MAP3K1 was reported to be responsible for regulating the transcription of important cancer genes including c-Myc, c-Elk1, c-Jun, and c-Fos (25). Based on our data, MAP3K1 was strongly associated with the HR+ subtype. NOTCH1, one of the key receptors in the Notch signaling pathway, could promote proliferation, invasion and metastasis of cancer cells (26). It was reported that the inhibition of NOTCH1 may prevent the pathogenesis and metastasis of breast cancer (27). NOTCH1 mutations were mainly found in the TNBC subtype in this study. Unlike TP53, ERBB2, or DDR alterations, no prognostic relevance was shown between RB1, NF1, MAP3K1, and NOTCH1 and MBC according to our data; further research with larger cohorts might be needed.

Compared to normal cells, cancer cells have attenuated DNA repair capacity, driving tumor formation (28). Recent studies have found that DDR alterations are independently associated with response to PD-1/PD-L1 blockade (29). In this study, the proportion of mutated DDR genes in MBC was higher than that in NMBC. The distribution of DDR mutations varied with different subtypes of MBC. DDR mutations were significantly associated with TMB, MATH score, and PFS, suggesting a relationship with heterogeneity and prognosis (30).

It is much argued that ctDNA has a similar mutational profile to gDNA. Given the occurrence of tumor heterogeneity and difficulties in obtaining samples of distant metastasis in clinical practice, ctDNA analysis may therefore provide a convenient way to identify mutations and assess tumor burden in MBC. The frequency of mutations observed in this study was concordant with tissue-based results from the matched MSK dataset (R2=0.8395). However, the validation of ctDNA application needs further and more comprehensive investigation. The potential target genes identified in the current study were evaluated in relation to the existing Genome-Wide Association Studies (GWAS). Most risk variants detected through GWAS were found in non-coding regions (31,32), highlighting the importance of using large-scale genomic data.

We investigated the genomic characteristics and prognostic indicators, based on a large MBC cohort with ctDNA analysis. The mutational profile of MBC was shown to be different from early stage of breast cancer and varied across multiple subtypes, including driver genes. TP53, ERBB2, or coexisting TP53/PIK3CA mutations in MBC contributed to shorter PFS. Furthermore, DDR mutations in MBC were significantly associated with TMB and MATH score, as well as unfavorable prognosis.

Reporting Checklist: The authors have completed the STROBE reporting checklist. Available at http://dx.doi.org/10.21037/atm-20-2137

Conflicts of Interest: All authors have completed the ICMJE uniform disclosure form (available at http://dx.doi.org/10.21037/atm-20-2137). The authors have no conflicts of interest to declare.

Ethical Statement: The authors are accountable for all aspects of the work in ensuring that questions related to the accuracy or integrity of any part of the work are appropriately investigated and resolved. The study was conducted in accordance with the Declaration of Helsinki (as revised in 2013), approved by the Institutional Review Board and Human Ethics Committee of at National Cancer Center/ National Clinical Research Center for Cancer/ Cancer Hospital, Chinese Academy of Medical Science and Peking Union Medical College (No. CH-BC-052) and informed consent was obtained from all the patients.