Surgical pneumothorax under spontaneous ventilation—effect on oxygenation and ventilation

In the last decades, the widespread use of epidural and local anesthesia techniques has allowed the development of safe minimally invasive thoracic surgery on awake patients in spontaneous breathing (1).

One lung ventilation (OLV) is required in most thoracic open procedure, especially in video-assisted thoracoscopic surgery (VATS), to allow an adequate comfort to surgical procedure (2).

Under general anaesthesia, three ways are usually used to achieve OLV. The classic, most common technique is the use of double lumen tube that allows to isolate either the right or the left lung (3,4).

In alternative, OLV can be achieved using a bronchial blocker or a single lumen tube. Latter options are more easily used to exclude or, respectively, ventilate the right lung because the more favourable angulation of the right bronchus (5).

In awake or sedated patient, the collapse of the operative lung, required for the optimal visualization of the surgical field during open surgery or VATS can’t be obtained by double lumen endotracheal tube, bronchial blocker or by single lumen endobronchial tube (6).

This iatrogenic event involves some inevitable pathophysiological changes, which modify in a significant manner ventilation, oxygenation and haemodynamic (9,10).

At the same time, spontaneous ventilation, through negative inspiration pressure and maintaining of diaphragmatic mobility, permits to better tolerate some of the pathophysiological alterations caused by surgical pneumothorax and lateral position (11).

In the next paragraphs we will discuss the main alterations resulting from the surgical pneumothorax and the way in which spontaneous breathing and lateral position affect these changes.

As during any kind of OLV technique, during surgical pneumothorax, the excluded and not ventilated lung continues to be perfused. This situation is typically defined as right-left intrapulmonary shunt, condition that involves an increased risk of intraoperative hypoxemia (12).

The pathophysiological mechanism which can protect from undesirable shunt effect is the HPV. Through it, the pulmonary arteries of hypoxic alveoli constrict and divert the blood flow to the arteries of well oxygenated alveoli (13).

Thanks to response of collapsed lung vasculature, ventilation to perfusion ratio alterations are minimized and relatively well tolerated, specially in awake patients, in which this mechanism is well maintained (14).

In fact, some anesthetic drugs, like volatile anesthetics, can inhibit the protective vasomotor response of HPV, exposing a greater risk of hypoxemia while others drugs, such as propofol or drugs used for epidural anesthesia, acting on the sympathetic system, have less inhibitory effect on HPV (15,16).

Awake thoracic epidural anesthesia, and surgical pneumothorax with spontaneous breathing, seems, therefore, to be protective against the risk of hypoxic intrapulmonary shunt.

Simple oxygen administration through a Venturi mask can easily correct a decrease in arterial oxygenation in an awake patient undergoing surgical pneumothorax. Dependent lung has been shown to be able to compensate for decrease in oxygenation (9).

Although administration of oxygen, in association with volume reduction and rebreathing effect, can lead to moderate hypercapnia, this rarely become clinically dangerous (17).

In surgical-induced pneumothorax, the negative intra-thoracic pressure, responsible for the physiological phase of inspiration, is lost on the side of the opened hemithorax. Air enters the pleural space through the surgical access on the chest wall, and transmitted atmospheric pressure determines the non-dependent lung collapse allowing an adequate surgical access (18-20).

The loss in tidal volume is not proportional to the size of pneumothorax because it is balanced by the increase in volume of the dependent lung (22). Furthermore, spontaneous breathing in association with the anatomic alterations of the collapsed lung, cause two major adverse effects (23) (Figure 1). 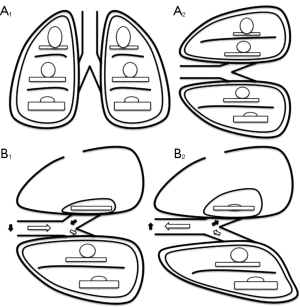 First, in the absence of selective intubation devices, during spontaneous ventilation, the dependent lung exhales part of the air volume into the undependent bronchus and relative lung. During inhalation phase, with the same mechanism, part of the air volume just filled undependent lung, will be re-inspired by the dependent lung. This mechanism of ventilatory impairment is known as paradoxical respiration, and may be responsible for hypoxia and hypercapnia in patients undergoing surgical pneumothorax in spontaneous ventilation.

The second alteration consists in oscillation of mediastinum during the respiratory cycle, to and from the dependent hemithorax. In the inspiratory phase, the negative pressure caused by diaphragmatic contraction in the dependent hemithorax determines the attraction of mediastinal structures. During expiration phase the diaphragm back toward the chest, increasing the hemi-diaphragm pressure and pushing the mediastinal structures contralateral. Collapsed hemithorax, due to continuous atmospherical pressure, is unable to contrast the structures displacement during inhalation and exhalation phases. This mediastinal shift can lead to compression of the dependent lung and his potential functional impairment. While general anesthesia, through the diaphragmatic paralysis, worsens the compression exerted by the abdominal organs on the lungs, spontaneous ventilation in surgical pneumothorax condition, better expands the dependent lung, improving ventilation to perfusion matching. In this way, the patients are exposed to fewer alterations of ventilation and oxygenation (24).

Moreover, in awake and spontaneously breathing patients, central nervous mechanisms increase respiratory rate trying to balance the increased carbon dioxide (CO2) tension due to the decrease in tidal volume (25). The goal during ventilation management of awake or sedated patient undergoing surgical pneumothorax is to maintain spontaneous respiratory activity, with a regular pattern and respiratory rate of 12-20 acts/min. Careful titration of opioid agents had been shown to allow an adequate control of respiratory rate in sedated patients. In case of significant hypercapnia, a modest ventilation in facemask may be required after giving notice to the surgical team (26).

Lateral decubitus position, in addition to being necessary for the surgical procedure, allows the patient significantly better oxygenation than supine position during OLV (28). However, it involves a condition of ventilation to perfusion mismatch: perfusion better occurs in the dependent lung, that behaves as the upright lung base, while the undependent lung, acting as its apex, has a greater ventilation (29-31) (Figure 1).

Dependent lung movements are limited by chest position and by rising of abdominal content toward the diaphragm, thus reducing ventilation compliance. At the same time, acting as the base of a lung in standing, dependent lung is better reached by blood pulmonary perfusion. Exactly the opposite occurs in the undependent lung and this implies that ventilation to perfusion ratio decreases in the former and increases in latter (32,33).

Considering the overall effect on the two lungs, in lateral position, VC, RV, and TLC decreases, due to the increasing of the intrathoracic blood volume (34,35).

They found in relatively normal lung, in interstitial lung disease, and in emphysema, a reduction in FEV1 respectively of 52%, 49%, and 30%, and in FVC of 45%, 46%, and 34%, proving lower impairment of ventilation in the already altered lungs. The authors suggest that lesser impairment was due to smaller lung collapse occurred in situation of existing ventilatory obstruction and hyperinflation.

Effectiveness of the surgical pneumothorax

The collapse degree also depends on the size of the iatrogenic pleural breach, that participates in the determination of the amount of air that enters the pleural space (9).

Creation of surgical pneumothorax can be now considered a safe technique that allows the realization of minimally invasive thoracic surgery in awake patients with spontaneous breathing. The exact knowledge of the main pathophysiological changes induced by opening of the pleura, allows obtaining the necessary awareness for prompt and safe management of the potential side effects.

The possibility to perform thoracic surgery procedures in awake and spontaneously breathing patients has shown to offer the advantage of avoiding the risks of general anesthesia and ensures a more physiological surgical course. Further detailed investigation is warranted to better define pros and cons as well as optimal indications for these procedurses.