Worldwide, hepatocellular carcinoma (HCC) is one of the most common cancers and the third leading cause of cancer-related death (1). In excess of 80% of HCC occur in Africa and Asia due to the prevalence of hepatitis B virus (HBV) infection in these regions. Portal vein tumor thrombus (PVTT) occurs in 44% to 62% of HCC patients and, without treatment, the median survival time (MST) is dismal, ranging from 2.7 to 4.0 months (2,3). Because PVTT complicating HCC often indicates more aggressive disease, reduced liver function, and elevated recurrence rates following treatment, it is considered a strong negative prognostic risk factor.

The best treatment strategy for HCC patients with PVTT remains controversial. HCC with PVTT is considered an advanced stage disease by the Barcelona Clinic Liver Cancer (BCLC) Staging System, and the American Association for the Study of Liver Diseases (AASLD). In most HCC staging classifications, sorafenib is considered the standard of care (4,5). However, the MST of HCC patients with advanced stage disease treated with sorafenib is only approximately 6.5 months (6-8). Recently, increasing evidence has shown R0 liver resection (LR) can yield better survival compared to nonoperative treatments, especially for patients whose PVTT involves first or second order portal vein branches (2,3,9).

We present the following article in accordance with the STROBE reporting checklist (available at http://dx.doi.org/10.21037/atm-20-2229).

The study comprised 716 consecutively accrued HCC patients with PVTT, who underwent LR from 2005 to 2012 in 6 hospitals. Clinicopathologic, demographic, and pathology data were recorded. The study was conducted in accordance with the Declaration of Helsinki (as revised in 2013). The study was approved by the Institutional Ethics Committees of the Eastern Hepatobiliary Surgery Hospital. (NO.: EHBHKY-2015-01-028) and informed consent was taken from all the patients.

The diagnostic criteria to verify PVTT included both imaging examinations [ultrasound, computed tomography (CT) and magnetic resonance imaging (MRI)], and intraoperative and postoperative histopathology. Based on the classification proposed by Cheng to describe the specific site of portal vein involvement (21), the categories are I, segmental/sectoral branches of the portal vein; II, left or right portal vein; III, main portal vein (MPV); and IV, thrombus in MPV extending to involve the superior mesenteric vein.

The inclusion criteria were (I) resectable HCC; (II) verification of PVTT; (III) patients with PVTT that was limited to Cheng type I and II PVTT; (IV) absence of macroscopic hepatic vein tumor thrombus, macroscopic bile duct tumor, local extrahepatic spread or distant metastases; (V) no other associated malignancies. Exclusion criteria included (I) liver function of Child-Pugh class C; (II) operative contraindications to splenectomy; or (III) incomplete data. HCC patients with PVTT were divided into two groups according to whether they had splenomegaly. Those patients who had splenomegaly were further subdivided into two subgroups according to whether they had undergone splenectomy prior to hepatectomy.

Diagnosis of splenomegaly and the criteria of splenectomy

All patients were followed every 2 to 3 months until death or if they drop out of the follow-up program. Specifically included was the thickness of the splenic hilum (which reflects the extent of splenomegaly) as defined by CT or MRI, measured in the central part of the hilum, perpendicular to the long axis of the spleen (23). When tumor recurrence was diagnosed, patients were treated with percutaneous ethanol injection, radiofrequency ablation, transhepatic arterial chem therapy and embolization, or LR, depending on the general condition of the patient, the functional liver reserve, and the pattern of tumor recurrence.

Continuous data was reported as medians with interquartile range (IQR) and were compared using the Mann-Whitney test. Normally distributed variables was reported as mean and standard deviation and were compared using the Student’s t test. Categorical variables was presented as numbers or frequencies (%), and were compared using the Chi-square test or the Fisher’s exact test. Survival curves were generated using the Kaplan-Meier method and compared with the log-rank test. Univariate and multivariate analyses were analyzed using the Cox proportional hazards stepwise model. Factors with statistical significance on univariate analysis were incorporated into multivariate analysis. Propensity score matching (PSM) was used in this study as there was heterogeneity in the study populations between the splenomegaly group (SM) and the non-splenomegaly group (non-SM) and between the splenectomy group (SPT) and the non- splenectomy group (non-SPT). Patients in the SM and non-SM groups were matched to the non-SM group using a matching ratio of 1:1, with the closest estimated propensity score (PS) within 0.1 of the standard deviation of the logit of PS. Patients in the SPT and non-SPT groups were similarly matched. A P value <0.05 was considered statistically significant. Following completion of PSM, univariate, multivariate logistic regression and Kaplan-Meier analyses were performed. The data analyses were performed using the SPSS software version 22.0 (Chicago IL, USA). 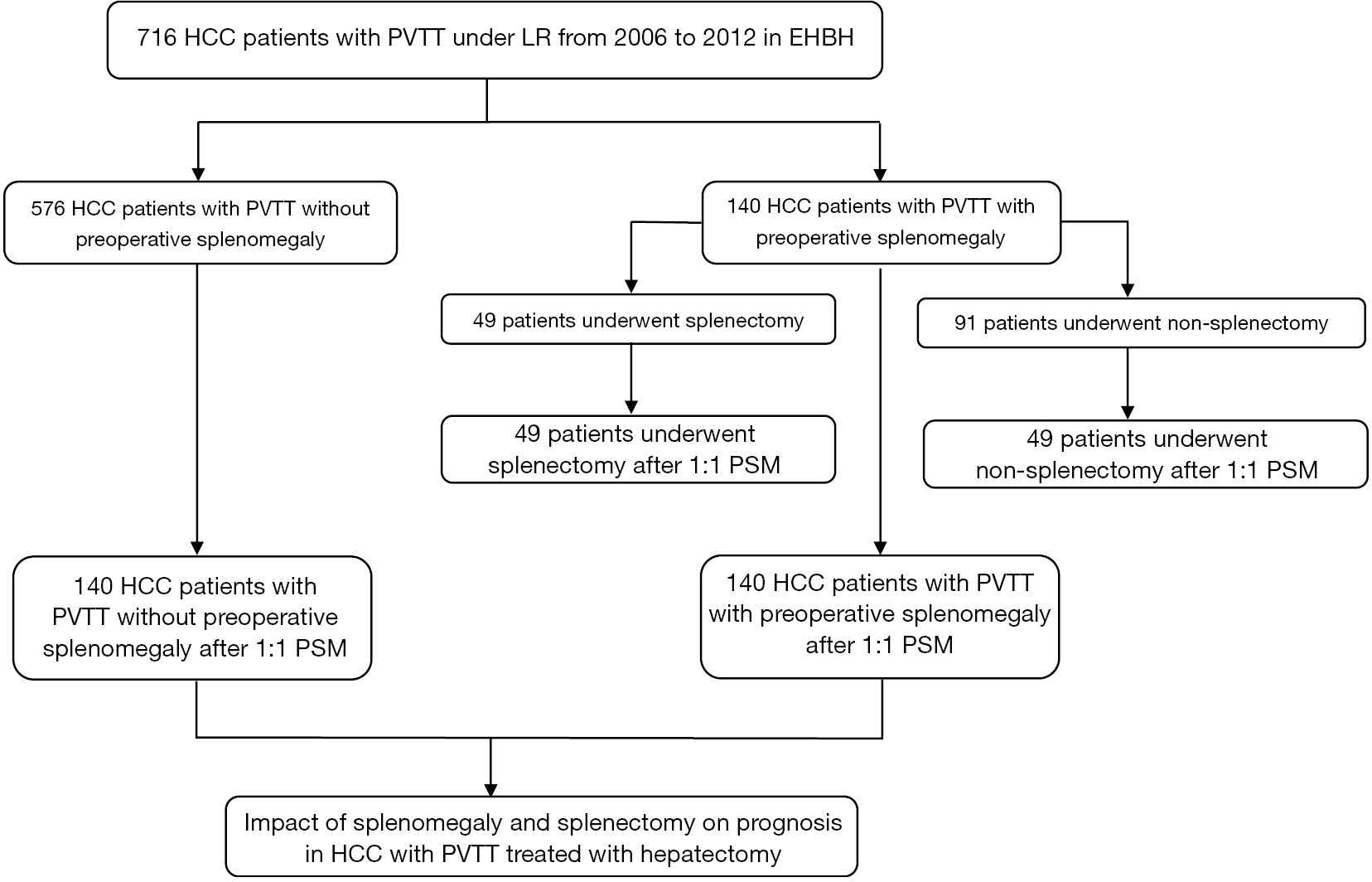 Figure 1 Flow chart for the selection of HCC patients enrolled in this study. HCC, hepatocellular carcinoma. 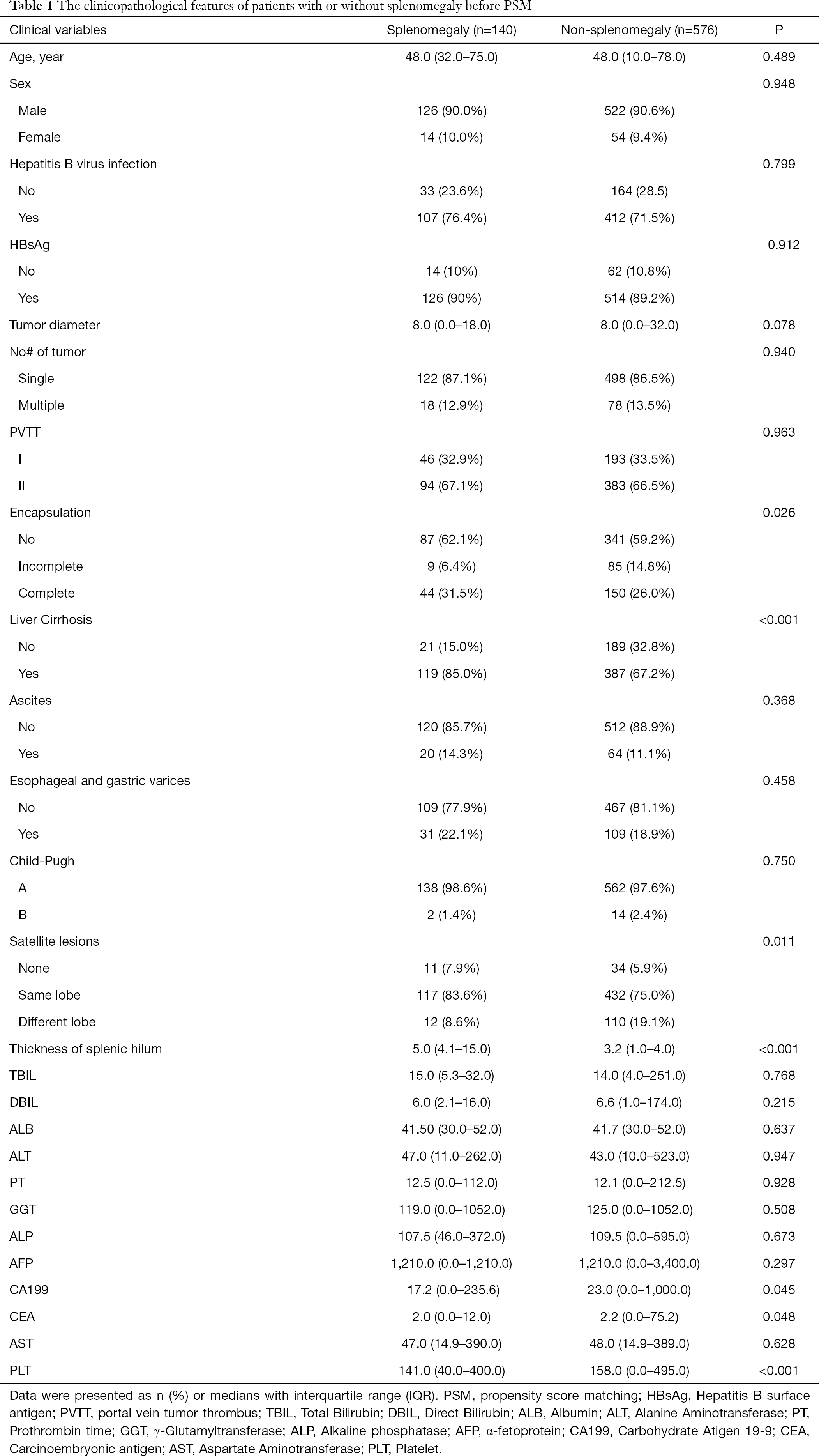 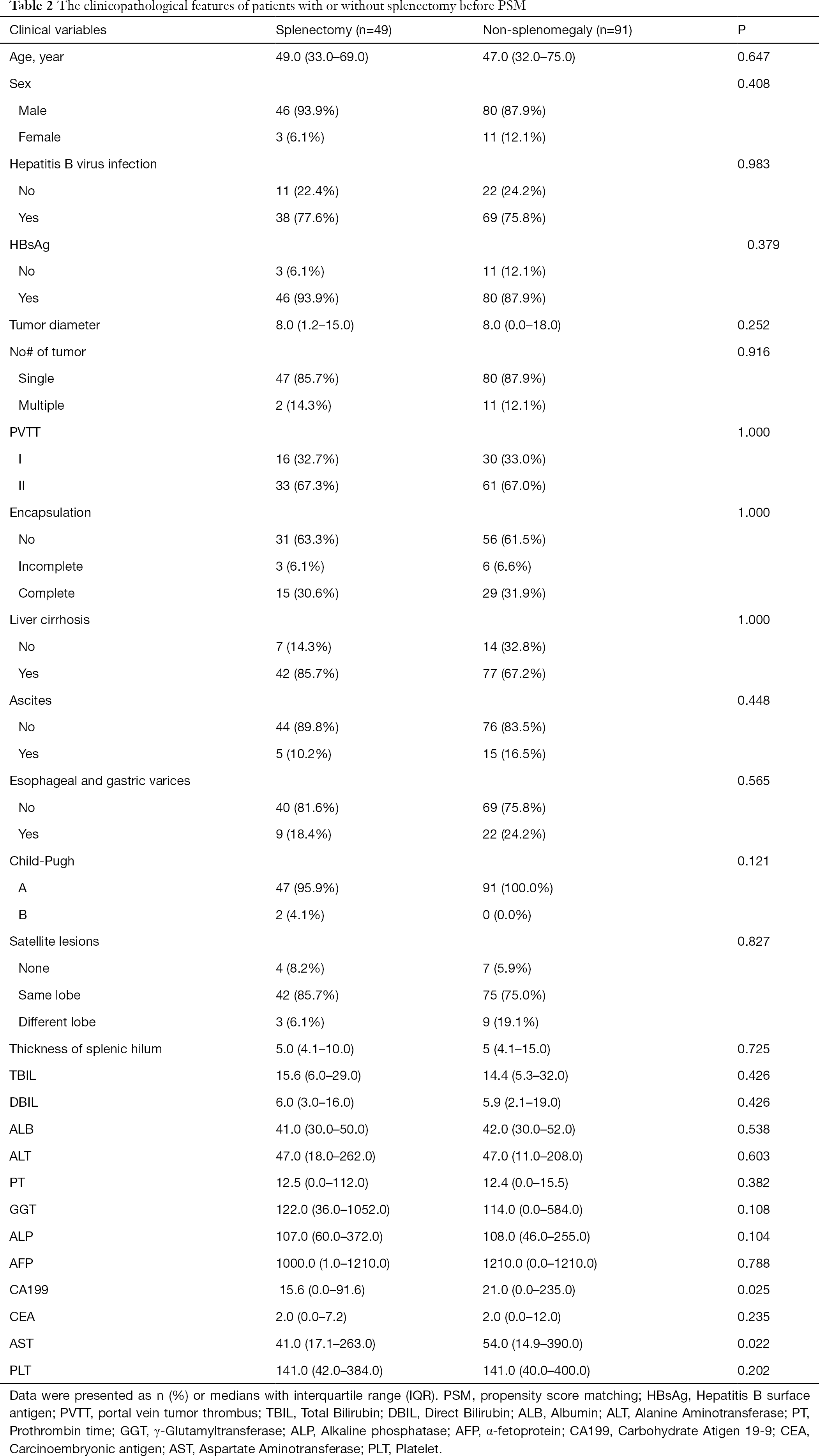 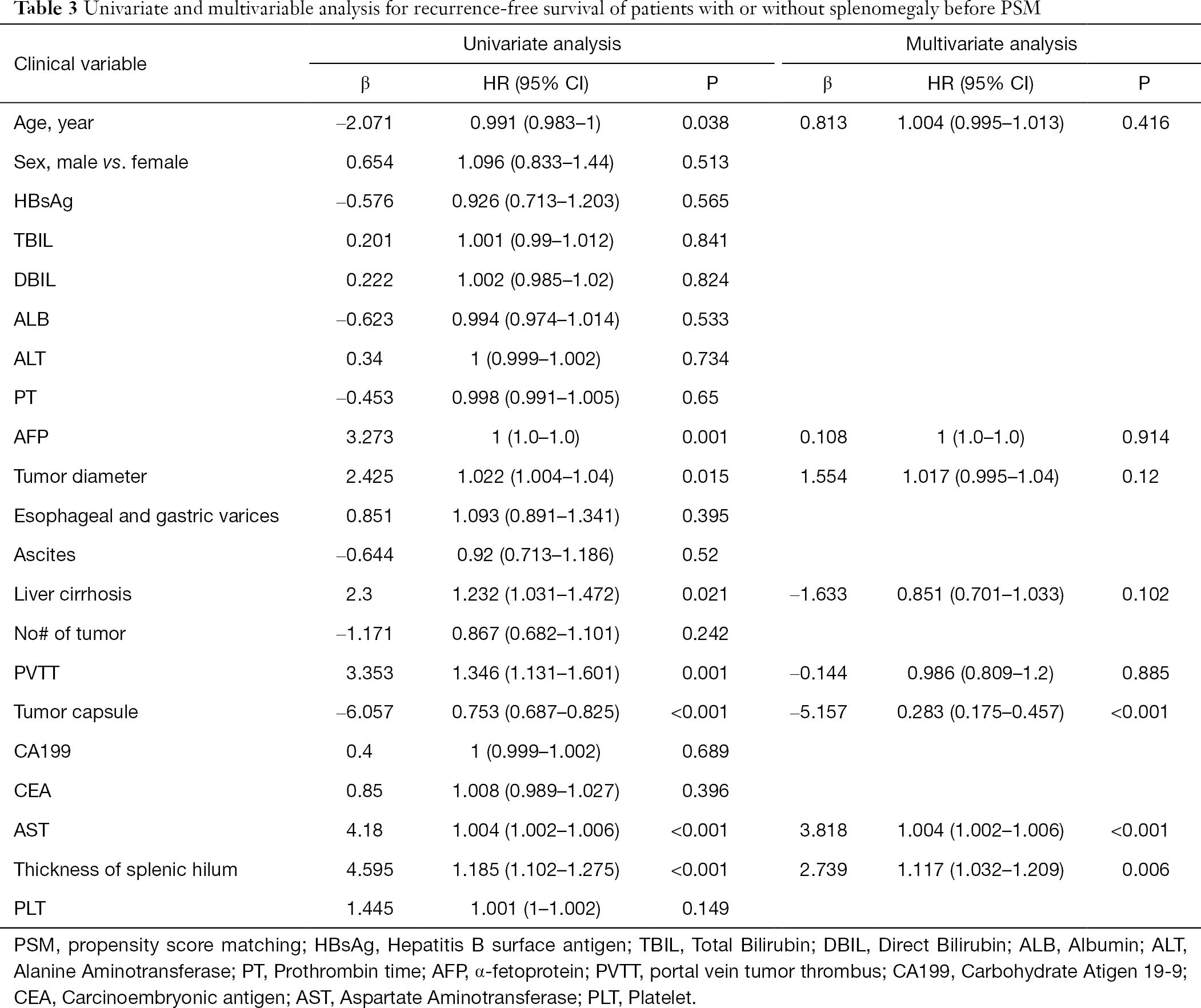 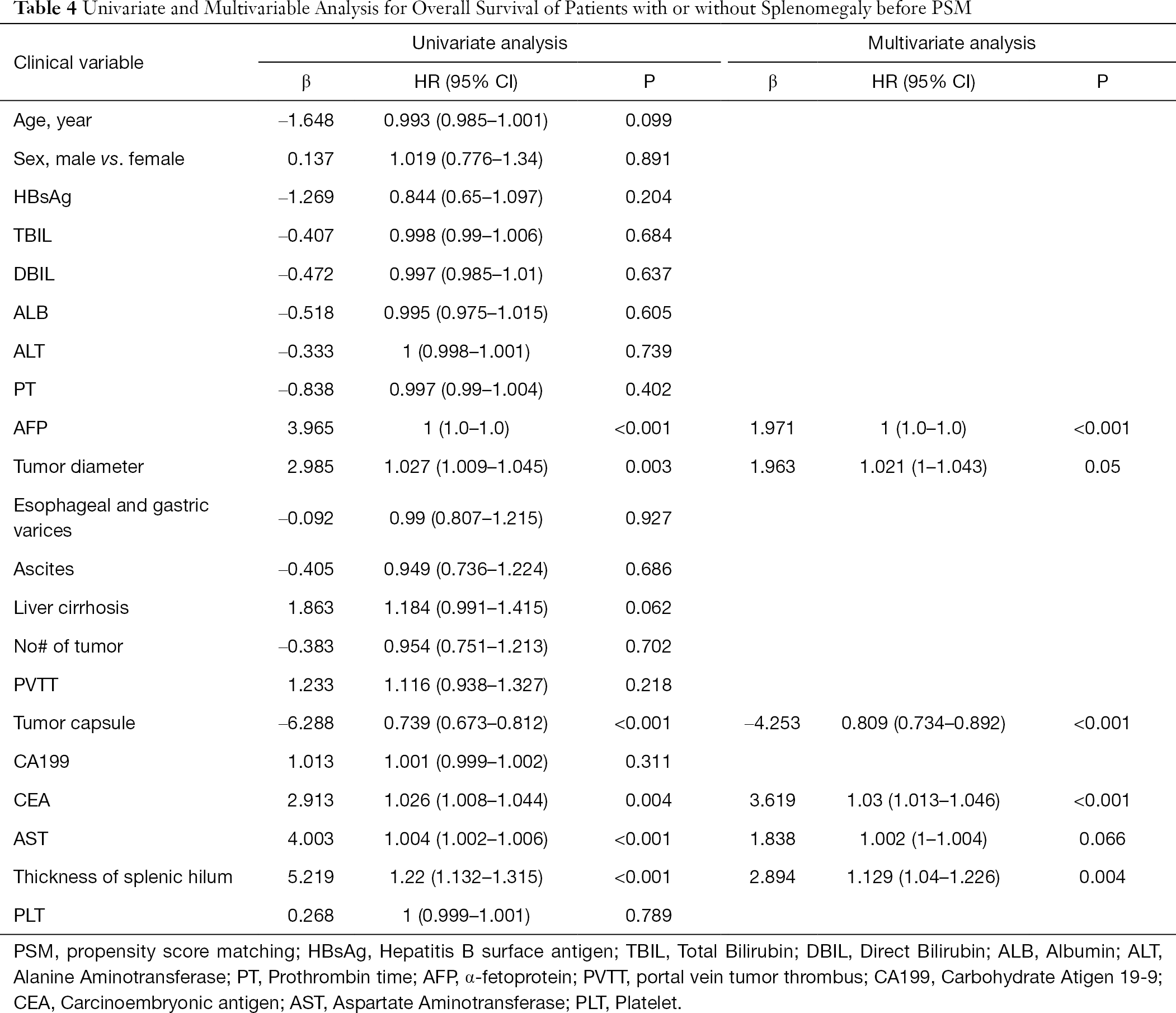 Survival Analysis of patients in the SM and non-SM groups 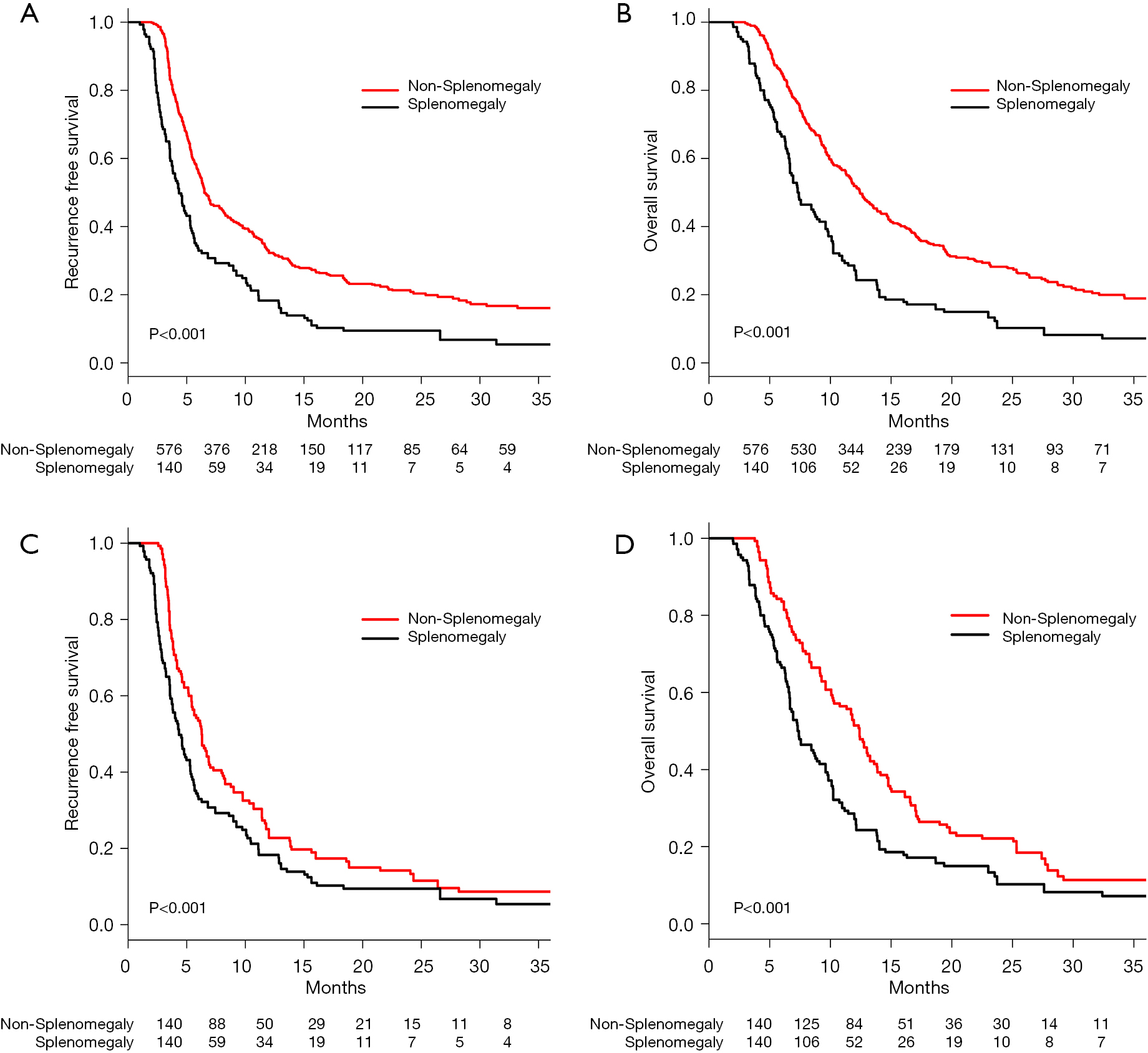 Survival analysis for patients in the SPT and non-SPT groups 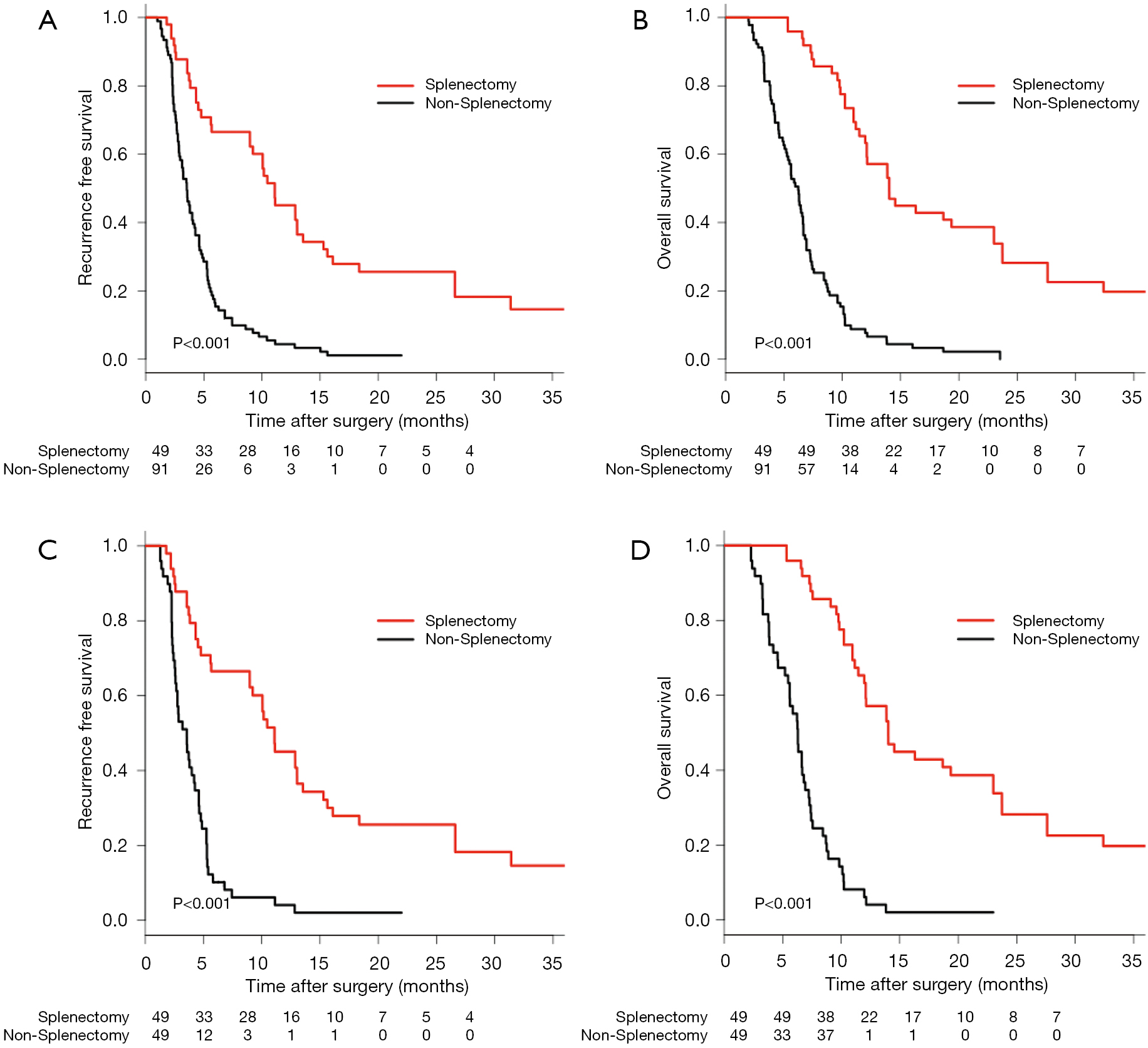 PVTT has been recognized as one of the most significant prognostic factors of poor survival in HCC patients (2,24). While many therapeutic modalities have been used to treat these patients, their effectiveness remains unsatisfactory. However, advances in both surgical treatment and perioperative management have rendered feasible R0 LR for the complex combination of HCC with types I and II PVTT (3,9,25). To our knowledge, there have been no prior studies that have assessed survival of HCC patients with PVTT and pathologic spleen, comparing treatment with or without splenectomy following LR.

Macrovascular invasion of the portal venous system presenting as PVTT is virtually always classified as advanced HCC (26,27). However, the specific factors impacting survival of HCC patients with PVTT remain elusive. A recent study reported that HBV infection and activity of the TGF-b-miR-34a-CCL22 axis might be related to the development of PVTT (28). Others have shown that liver fibrosis, severity of PVTT, and proteins induced by vitamin K absence or antagonist II (PIVKA-II) were independent prognostic factors for survival of HCC patients with PVTT (29). In contrast, a low serum concentration of des-γ-carboxy prothrombin combined with curative resection of HCC with main portal vein PVTT was associated with improved 5-year survival (30). Multiple tumours, tumour rupture and macrovascular invasion have been identified as independent risk factors for recurrence and reduced survival in operated HCC patients with PVTT (31). In the current study, incomplete tumor encapsulation, AST, and thickness of splenic hilum were independent risk factors of poor RFS. Additionally, independent risk factors for poor OS included α-fetoprotein level, CEA, incomplete tumor encapsulation, and thickness of splenic hilum. Notably, the thickness of splenic hilum has reportedly been an indicator for splenomegaly, an independent risk factor for poor survival, and should be considered a novel prognostic factor for poor survival in patients with HCC and PVTT. Not surprisingly we found that RFS and OS in the non-SM group were significantly better than that of the SM group. Splenomegaly negatively impacted RFS and OS in HCC patients with PVTT treated with LR. The reason appears to be directly related to hypersplenism (32,33). HCC with PVTT is always complicated by decompensated liver function caused by liver cirrhosis. Decompensated liver function is accompanied by portal hypertension, splenomegaly with hypersplenism, all of which compromise the outcome of curative treatment (34,35). Furthermore, hypersplenism decreases WBC and platelet counts, increasing risk of coagulopathy and infection. Ultimately it increases the risks of tumour recurrence and metastasis (36).

Due to the frequent potential postoperative complications associated with splenomegaly, splenectomy was performed prior to LR in these HCC patients. Reports have demonstrated that splenectomy has improved thrombocytopenia and leukopenia and decreased portal venous pressure (15,37). Additionally, splenectomy may help to improve liver function, nutritional metabolism, and Child–Pugh scores which have expanded the indications for LR and increased RFS (10,15,16,38-40). Some researchers advise synchronous hepatectomy and splenectomy in patients with HCC and a pathologic spleen (41). In this study, the long-term survival of HCC patients with PVTT in the SPT group was significantly better than the non-SPT group (P<0.001 for OS and DFS). Studies suggest that splenectomy can restore lymphocyte function and induce tumour regression, perhaps due to increased number of natural killer (NK) cells, reduced transforming growth factor (TGF)-β1 expression, and alteration of the immune response against cancer due to modulation of CD4+ and CD8+ T cells (17,19,42,43). Splenectomy may even play a prophylactic role against HCC recurrence following LR (18). Taken together, these studies support our findings that splenectomy is beneficial for HCC patients with PVTT.

Our study has several limitations. First, it is a retrospective study with the usual attendant potential biases. Second, most patients enrolled in this study had a background of HBV infection. Whether the results of our study can be applied to patients with HCV or alcohol-related HCC remain to be determined.

Funding: This work was supported by the grants of the National Natural Science Foundation of China [81702335].

Reporting Checklist: The authors have completed the STROBE reporting checklist. Available at http://dx.doi.org/10.21037/atm-20-2229

Conflicts of Interest: All authors have completed the ICMJE uniform disclosure form (available at http://dx.doi.org/10.21037/atm-20-2229). The authors have no conflicts of interest to declare.

Ethical Statement: The authors are accountable for all aspects of the work in ensuring that questions related to the accuracy or integrity of any part of the work are appropriately investigated and resolved. The study was conducted in accordance with the Declaration of Helsinki (as revised in 2013). The study was approved by the Institutional Ethics Committees of the Eastern Hepatobiliary Surgery Hospital. (NO.: EHBHKY-2015-01-028) and informed consent was taken from all the patients.