Glutamate is one of the most prevalent excitatory neurotransmitters in the mammalian central nervous system (CNS), where it is essential for the rapid excitatory signals. During neurotransmission, glutamate is released to synaptic cleft, and some of them is spilled over to extra-synapses (1). Residual glutamate in the extra-synapses is cleared by glutamate uptake transporters, which are expressed, principally, in astrocytes to keep extracellular glutamate at low concentration (2). In the brain, extracellular glutamate level ranges between 0.18 and 2.12 µM to avoid neurotoxicity (3-6). The pathological accumulation of extracellular glutamate, referred to as excitotoxicity, contributes to a broad range of neurological and neuropsychiatric diseases, including ischemic stroke, Parkinson’s diseases, epilepsy, Huntington’s disease, mood disorders and schizophrenia (2).

A.bidentata poplypeptides (ABPPs) were obtained by means of classical salting-out sedimentation with ammonium sulfate from the extract of A.bidentata Blume root decoction (14). Calcium imaging data showed that ABPPs block NR2B-containing NMDARs, and enhance function of NR2A-containing NMDARs in cultured hippocampal neurons (14). However, during development, the change in the expression of NR2 subunit variations is observed in primary cultured neurons. Immature cultures (7 days in vitro) contain mainly NR2B subunits, while mature cultures (14 days in vitro) express mostly NR2A subunits (8,15). Therefore, in the current study, we assessed the neuroprotective effect of ABPPs on NMDA-mediated excitotoxicity in immature and mature cultured hippocampal neurons, and clarified the differential modulation of ABPPs on NR2A- and NR2B-containing NMDAR by electrophysiological recording technique. We present the following article in accordance with the MDAR checklist (available at http://dx.doi.org/10.21037/atm-20-581).

A. bidentata Blume root was powdered and soaked in ultrapure water at 80 °C. ABPPs were subsequently prepared as described by Shen et al. (14). Briefly, the decoction was saturated with ammonium sulfate, and the precipitate was collected by centrifugation. After desalination in 1,000 MW cutoff tubing with ultrapure water, the dialysate was lyophilized into a powder of ABPPs, which are soluble in water. The ABPPs were characterized by high performance liquid chromatography (14).

The whole study protocol was approved by the Ethics Committee of Nantong University (No. 20080118-001) and all the procedures were followed by the Chinese Guidelines for the Care and Use of Laboratory Animals.

All experiments were implemented on primary cultures of rat hippocampal neurons. Tissues were isolated from embryonic day 18 Sprague-Dawley (SD) rats, and prepared as previously (16). Briefly, the whole fetal brains were quickly dissected out, and the hippocampi were harvested and digested with 0.25% tyrosine (Gibco, New York, NY, USA) at 37 °C for 5 min. Neurons were cultured in Dulbecco’s modified Eagle’s medium (DMEM, Gibco), supplemented with 10% fetal bovine serum (FBS, Gibco), and were plated at a density of [6–8]×104 cells/cm2 onto poly-D-lysine-coated 96-well plates or 8 mm glass coverslips in dishes. After 24 hours, the medium was replaced with Neurobasal medium (Gibco) containing 2% B27 supplement (Gibco) and glutamine (0.5 mM, Gibco). After that, half of the medium was replaced with fresh medium every 3 days.

Cellular viability measurements were performed promptly and after 24 hours of exposure to NMDA using 3-(4,5-dimethylthiazol-2-yl)-2,5-diphenyltetrazolium bromide (MTT, Sigma) assay. The detailed methods were described previously by Shen et al. (14). Data were expressed as the percentage value, which was normalized to the control cultures (Elx 800, Bio-TEK Instruments Inc., VT).

Receptors for NMDA that are ligand-gated ion channels play a critical role in NMDA-induced neurotoxicity (17). The activation of NMDA receptors is identified by the influx of Na+, Cl−, Ca2+ ions, which are examined by whole-cell patch clamp recording in cultured hippocampal neurons (18). The NMDA-elicited currents were measured in Mg2+-free solution containing Ca2+ (2 mM), with 2-minute bath perfusion after NMDA current was recorded. All detailed procedures were described previously by Shen et al. (19). The change of amplitude NMDA currents was expressed as the percentage value, which was normalized to the basal level recording in the same hippocampal neuron.

All data were expressed as means ± SD. Significance was analyzed by one way analysis of variance (ANOVA) with sigmaplot 13.0 software packages (Systat, San Jose, CA, USA), and differences between two groups were assessed by Student-Newman-Keuls post hoc test. The value of P<0.05 was considered statistically significant. All data and statistical analysis comply with the recommendations on experimental design and analysis in pharmacology (20).

Primary cultured hippocampal neurons (DIV7) were exposed to an increasing concentration of NMDA (10–1,000 µM) for 1hour. NMDA induced a concentration-dependent reduction in cell viability of hippocampal neurons, as detected immediately after NMDA stimulation by MTT assay (Figure 1A). Exposure to 300 µM NMDA for 1 hour was used to induce excitotoxic neuronal injury in the ensuing test. 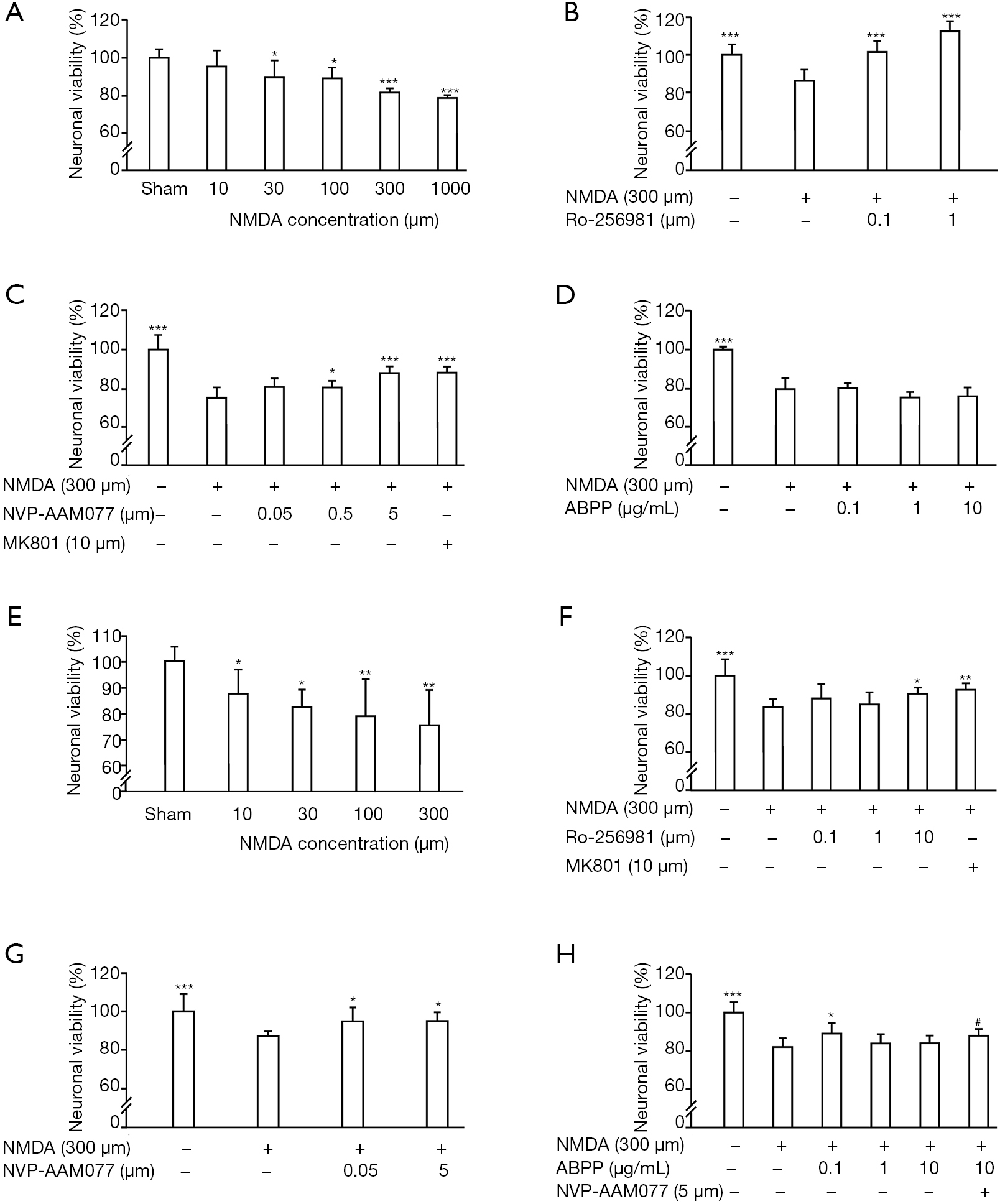 Cultured hippocampal neurons (DIV14) were exposed to an increasing concentration of NMDA (10–1,000 µM) for 1 hour. Data showed that NMDA evoked the decrease of cell viability, which was measured immediately after NMDA stimulation, in a concentration dependent manner (Figure 2A). NMDA-mediated neurotoxicity was blocked by Ro-256981, NVP-AAM077, or MK-801 (Figure 2B,C), but ABPP (0.1–10 µM) did not prevent the transient decrease of neuronal cell viability by NMDA stimulation (Figure 2D). 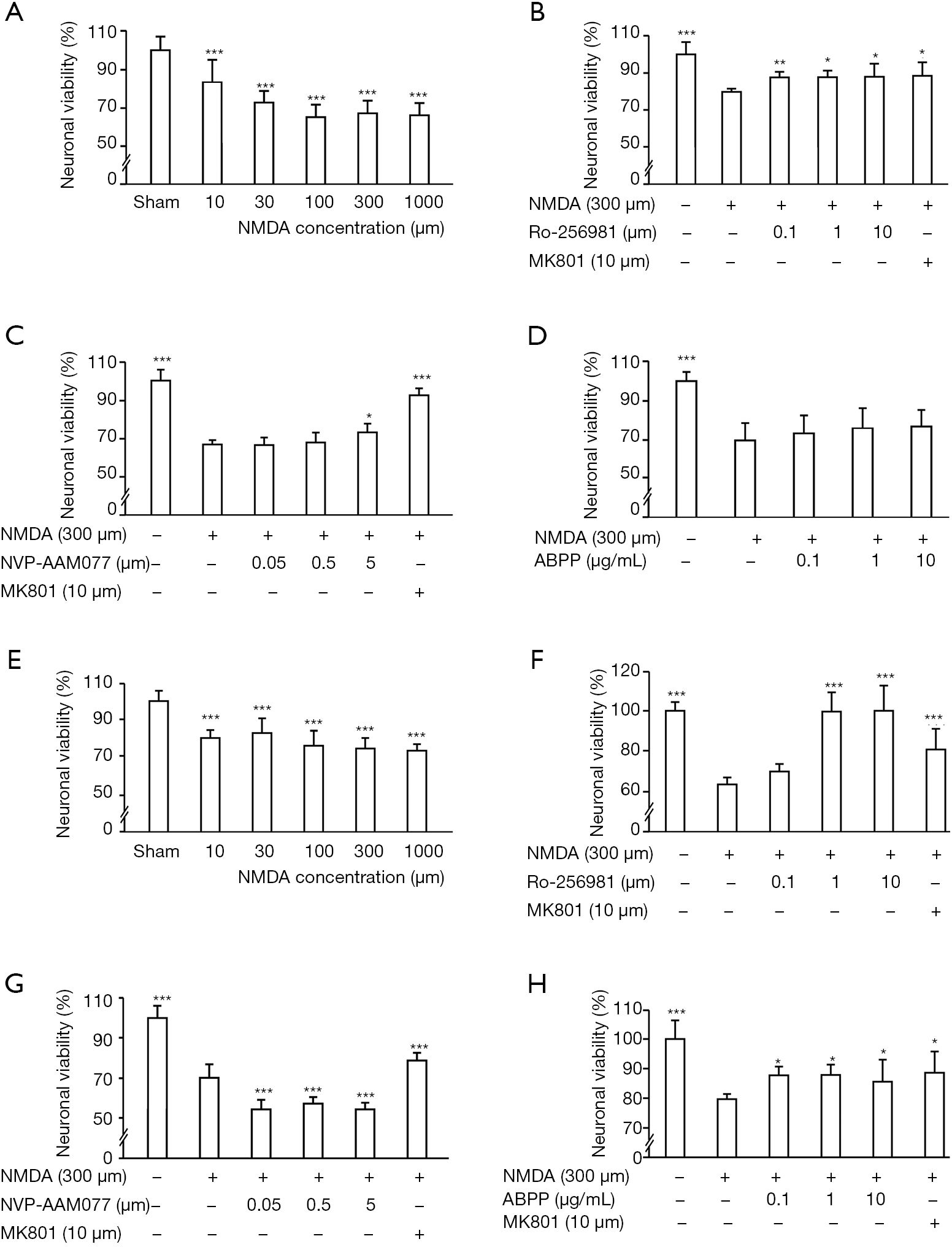 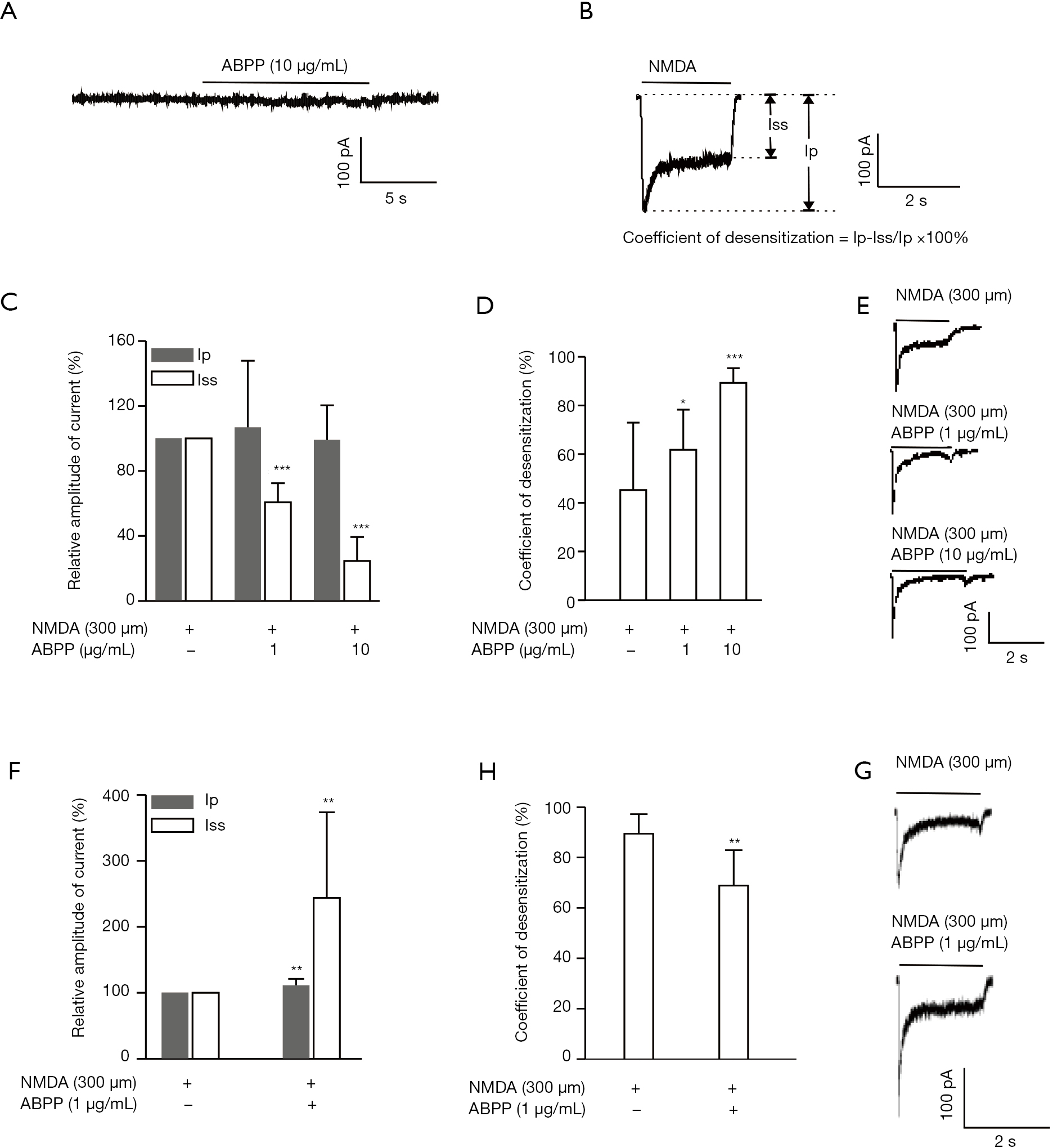 To investigate the differential effects of ABPPs on immature and mature hippocampal neurons, we examined the NMDA-evoked current by whole-cell patch clamp recording. ABPP (10 µg/mL) did not evoke a significant current (Figure 3A). However, NMDA (300 µM) induced a significant current, which was divided into two sections: the peak current (Ip) and the sustained state current (Iss) (Figure 3B). The sustained state current was inhibited by ABPPs in a concentration dependent manner (Figure 3C,E), while coefficient of desensitization of NMDA currents was promoted by ABPPs in primary cultured hippocampal neurons (DIV 7) (Figure 3D,E). In primary cultured hippocampal neurons (DIV 14), ABPPs elevated the amplitude of the peak and sustained state current (Figure 3F,G), while coefficient of desensitization of NMDA currents dropped off (Figure 3G,H). Since NR2 subunit variations switches from NR2B to NR2A during development in cultured hippocampal neurons (21-24), the results suggested that ABPPs might modulate NR2A-containing and NR2B-containing NMDA receptors in a differential way. 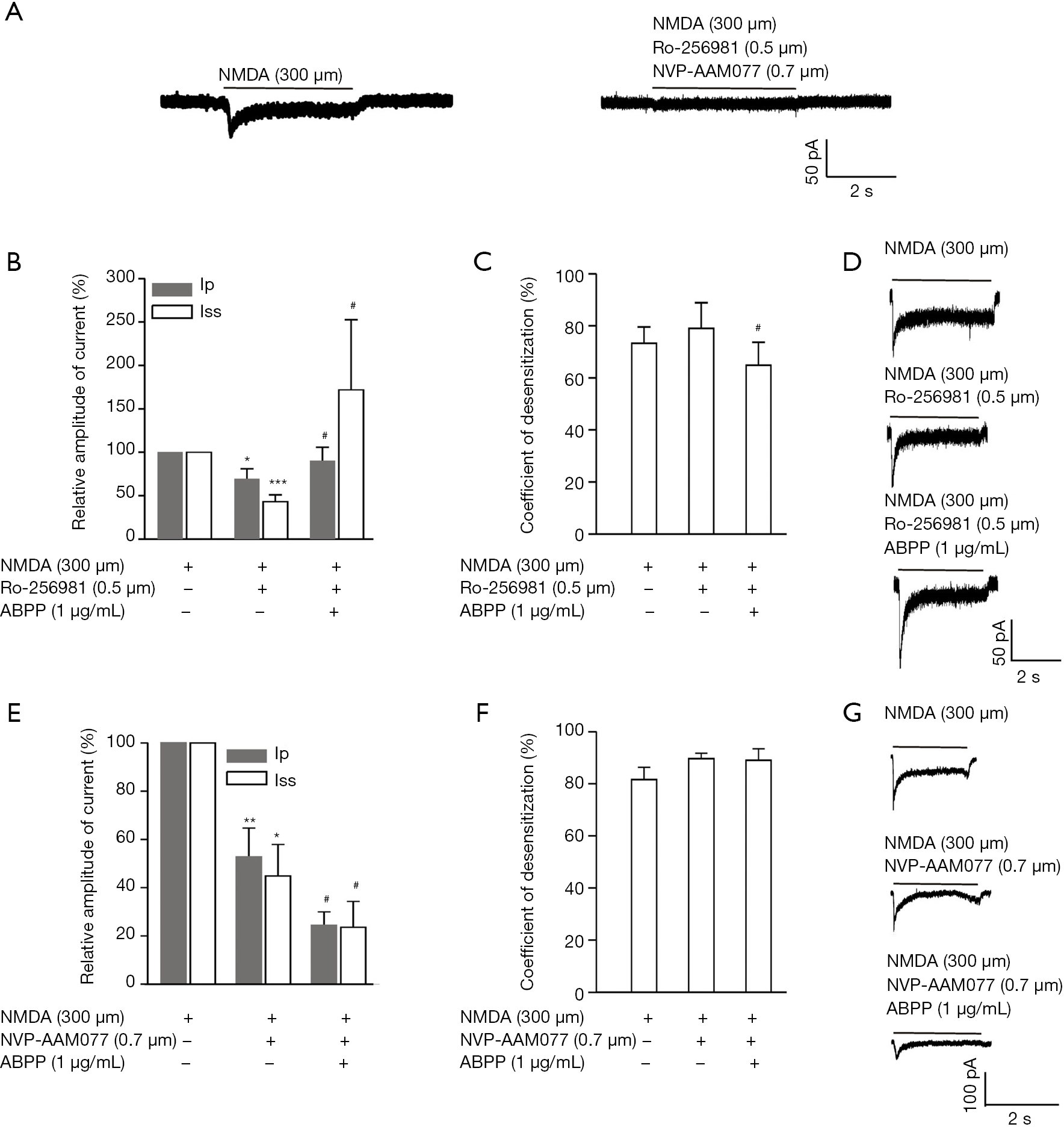 In the present study, we originally reported the differential neuroprotective effects of A.bidentata polypeptides (ABPPs) on NMDA-induced excitotoxicity in immature and mature cultures, in combined with NR2 subunit specific antagonist. With electrophysiological recording technique, modulation of ABPPs on NMDA receptors was also observed differentially in immature and mature cultured neurons. Furthermore, in conjunction with NR2 subunit specific antagonist, we confirmed that the differential role of ABPPs on NR2A- and NR2B-containing NMDA receptors.

NMDA receptors are a subtype of ionic glutamate receptors, and are characterized of high permeability to calcium ions (18). Considerable literature has demonstrated that calcium influx via NMDA receptor is the key step in glutamate-induced excitotoxicity. In primary hippocampal neurons, NMDA receptors are mainly NR2A- and NR2B-containing NMDA receptors, which are blocked by NVP-AAM077 and Ro-256981 respectively. Our data confirmed that NR2A- and NR2B-containing receptors contribute to NMDA-evoked current by electrophysiological recording trace in cultured hippocampal neuron (Figure 4A). Furthermore, NMDA-evoked decrease of cell viability, which was measured immediately after NMDA stimulation, was inhibited by Ro-256981 or NVP-AAM077 in a concentration dependent manner (Figures 1B,C,2B,C). However, treatment of cultures with ABPPs did not reverse the immediate drop of cell viability by NMDA stimulation (Figures 1D,2D). There are two possible explanations for the results. One is that ABPPs have no effects on NMDA receptors; the other is that ABPPs confer differentially modulation of NR2A- and NR2B- containing NMDA receptors.

Reporting Checklist: The authors have completed the MDAR checklist. Available at http://dx.doi.org/10.21037/atm-20-581

Ethical Statement: The authors are accountable for all aspects of the work in ensuring that questions related to the accuracy or integrity of any part of the work are appropriately investigated and resolved. The whole study protocol was approved by the Ethics Committee of Nantong University (No. 20080118-001) and all the procedures were followed by the Chinese Guidelines for the Care and Use of Laboratory Animals.