Recent studies support the benefits of total arterial or multi-arterial revascularization (6,7). The application of multiple arterial grafts (7) and the avoidance of saphenous vein grafts (SVG) (8) led to a lower graft failure rate, which potentially decreased the risk of long-term death, myocardial infarction (MI), and repeat revascularization. In the European guidelines, total arterial revascularization (TAR) is now a Level IIA recommendation for patients with a long life expectancy (9). However, TAR is used to treat a minimal number of patients nowadays, for multifactorial reasons (10). For patients at high risk for sternal complications, TAR with the bilateral internal mammary artery (BIMA) should not be performed (11). A low degree of target stenosis and targets in RCA territory decrease the patency of arterial grafts (12). Moreover, harvesting multiple arterial grafts increases operation time.

The non-inferiority of HCR to TAR has not, however, been verified, and the clinical results of HCR for the treatment of LM disease is unclear. This study sought to assess the safety and efficacy of HCR in comparison with TAR for treating LM disease. We present the following article in accordance with the STROBE reporting checklist (available at http://dx.doi.org/10.21037/atm-20-4224).

The study was conducted in accordance with the Declaration of Helsinki (as revised in 2013). The study was approved by institutional ethics board of Ruijin Hospital (No. 2020-21) and individual consent for this retrospective analysis was waived. Data of patients attending the hospital between January 2009 and December 2019 were used. The inclusion criteria were as follows: (I) the patient underwent HCR or TAR; (II) the patient had LM disease; (III) the surgeons performed LIMA-to-LAD anastomosis. The exclusion criteria were as follows: (I) the operation was emergent; (II) the operation was a redo surgery.

We divided patients into an HCR group and TAR group according to the revascularization therapy used. HCR in our unit was completed in two-stages, combining minimally invasive direct coronary artery bypass (MIDCAB) and PCI with DES. In the first year after surgery, all patients received aspirin 100 mg and clopidogrel 75 mg per day. Following this, patients continued to take aspirin 100 mg daily.

“Perioperative” was defined as within 30 days after surgery. The perioperative clinical outcomes were as follows: (I) death, defined as death from any cause (cardiovascular and non-cardiovascular mortality); (II) MI, defined as MI type 5 according to the Fourth Universal Definition of Myocardial Infarction (17); (III) stroke; (IV) TVR, defined as the target vessels needing PCI or redo surgery; (V) MACCE; (VI) the length of stay (LOS) in hospital.

The researchers reviewed adverse events during the study and adjudicate them to ensure the events met the definitions given. Two researchers independently adjudicated each event. A third researcher was called to adjudicate an event if the agreement was not reached. These assessments were blind to the knowledge of which group the patients were placed in.

A multivariate logistic regression model was employed to calculate propensity scores (PS), which estimated the probability that the patients would be selected for HCR, using all of the preoperative characteristics. We used IPW based on PS to adjust for differences between the two groups. This approach, which was implemented to create balance, weighted each patient by a stabilized weight, according to the study of Hernan (18).

Continuous variables were summarized as mean ± standard deviation (SD) or median (the 25th percentile, the 75th percentile), and categorical variables were categorized as percentages. Continuous variables were compared using a two-tailed Student’s t-test. Categorical variables were compared using the χ2 test or Fisher exact test. The time to the first occurrence of MACCE was described by the unadjusted Kaplan-Meier curve (K-M curve) and the adjusted K-M curve with the use of IPW, and the comparison of K-M curves was performed with the log-rank analysis. The adjusted K-M curve was obtained using R package IPW survival (F. Le Borgne and Y. Foucher, 2017). Using estimated freedom from MACCE among patients undergoing HCR and those undergoing TAR, we calculated risk ratios at specific time points and used bootstrap methods to obtain 95% confidence intervals (CIs). The hazard ratio (HR) was calculated by a Cox proportional hazards model and adjusted via the PS. The HR was estimated with the TAR group as the control group. All analysis was performed with SPSS version 22.0 (Chicago, IL, USA) and R version 3.4.3. A P value of <0.05 was considered to be statistically significant. 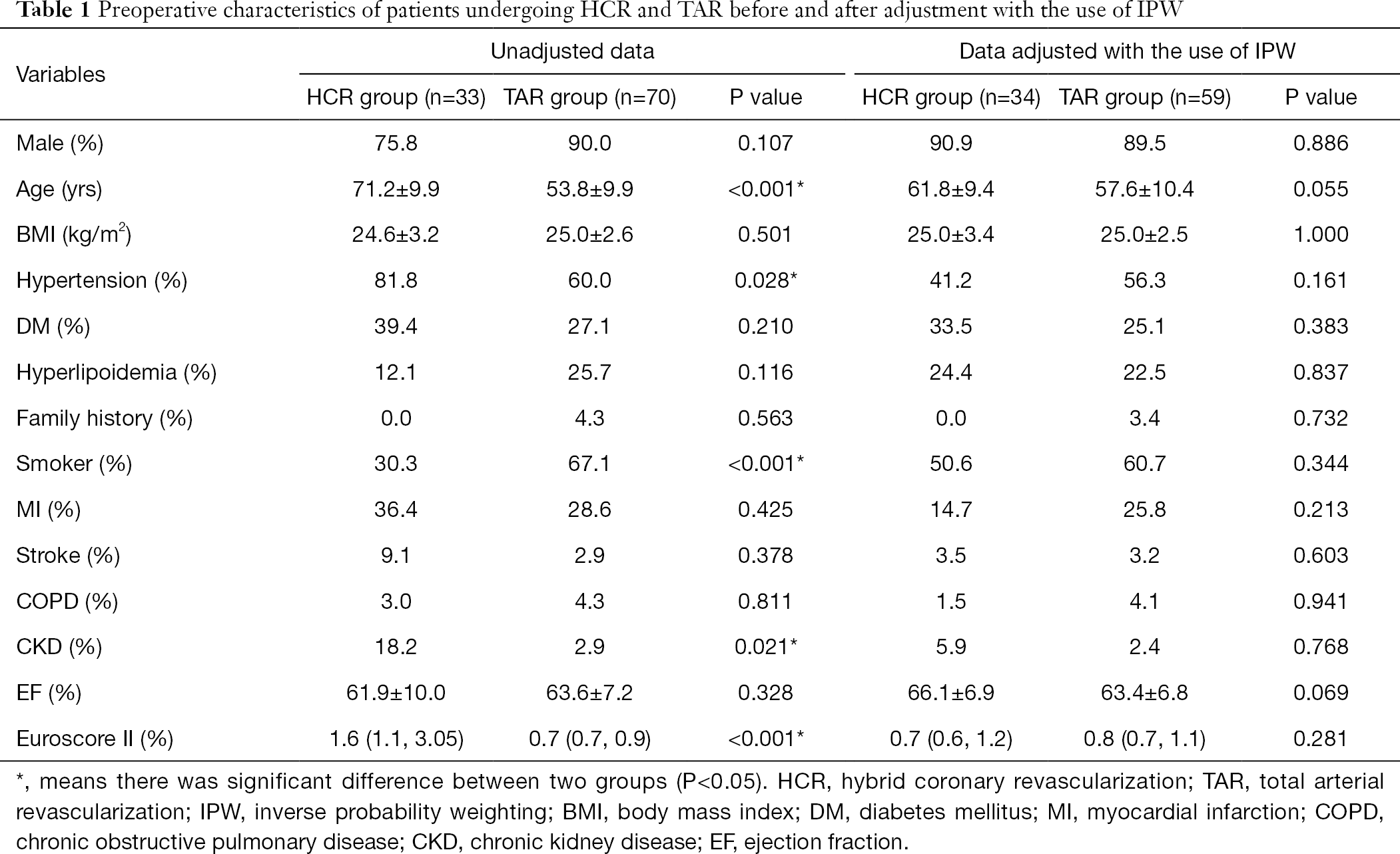 The median follow-up time was 47 (interquartile range, 20 to 85) months. The follow-up rates of the HCR and TAR groups were 90.9% and 90.0%, respectively. Before adjustment, the incidence of MI was significantly higher in the HCR group than in the TAR group (P=0.015). The incidences of the other mid-term outcomes were comparable between the two groups (P>0.05) (Table 3). After adjustment, there was no difference in the incidences of all mid-term outcomes between the two groups (P>0.05) (Table 3). 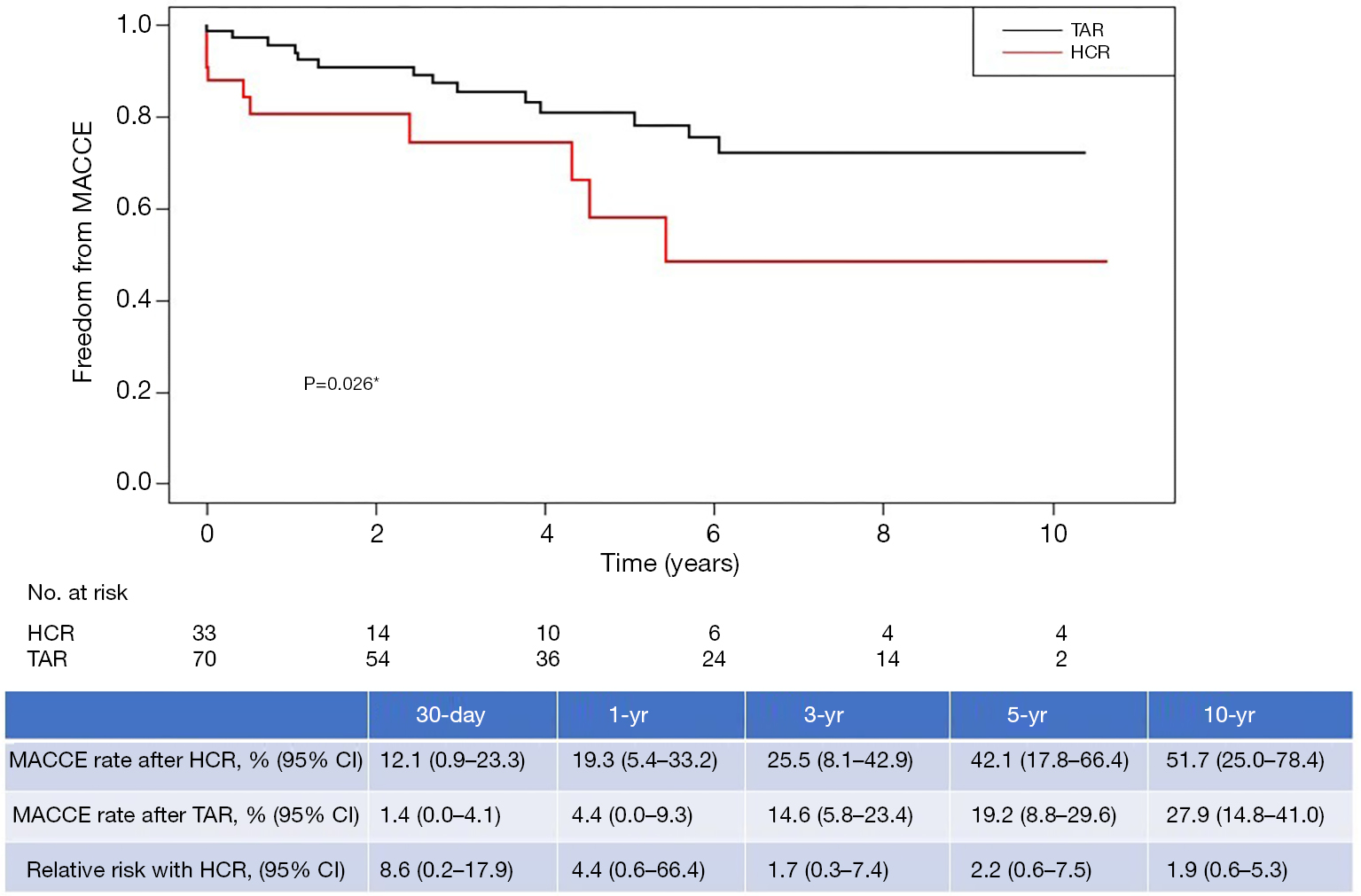 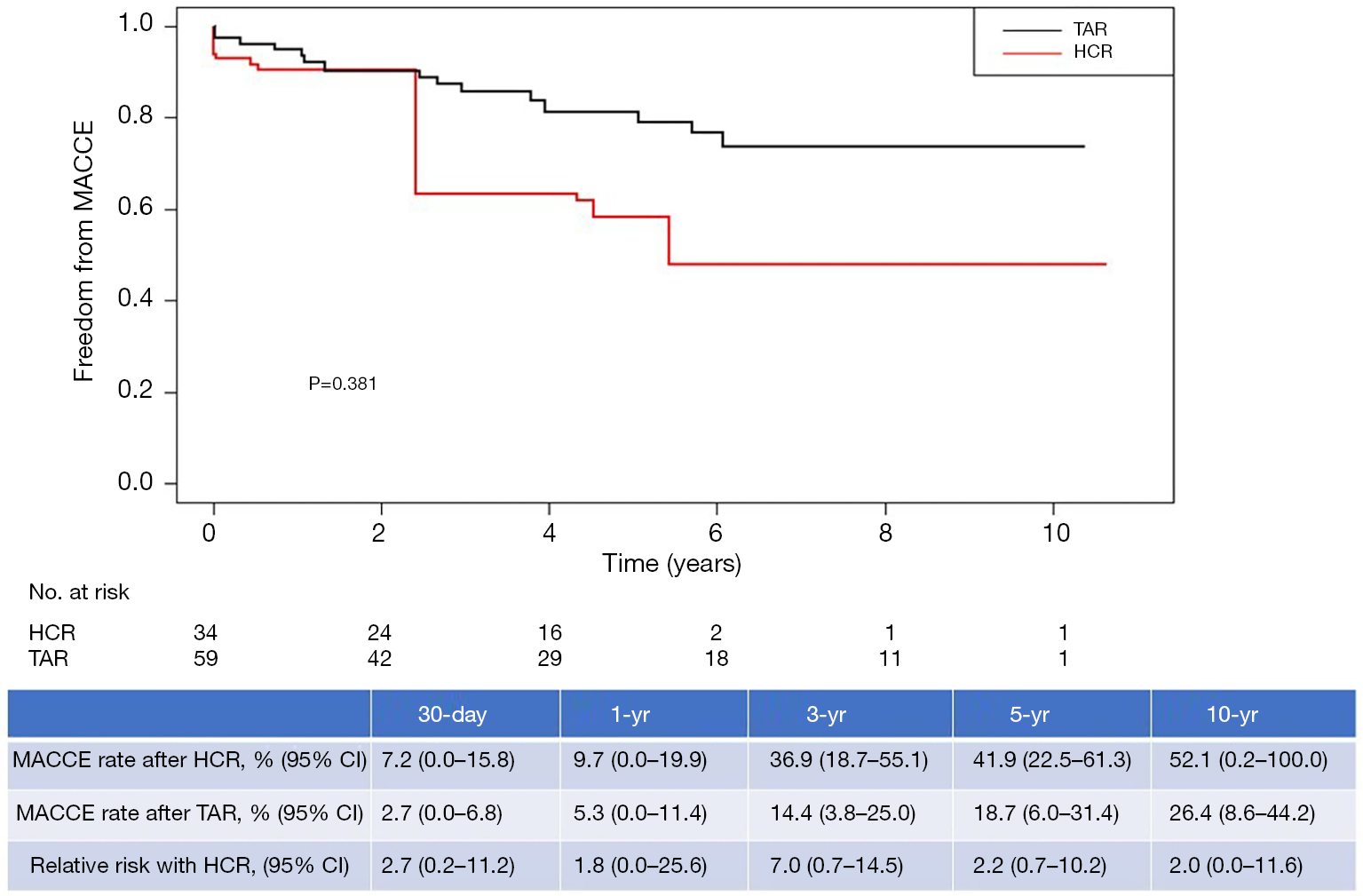 Patients with LM disease have a poor prognosis due to a large amount of myocardium at risk (19). Revascularization brings survival benefits to these patients in comparison to medical therapy alone (20). In the RCTs involving LM disease patients, CABG was associated with a lower mortality and MACCE rate at 5 years than PCI, making CABG a more reasonable option for LM disease (4,5). Graft selection influences the outcomes following CABG. Multiple studies demonstrate that a second arterial graft, such as a right internal mammary artery (RIMA) (6) or a radial artery (RA) (7), has incremental benefits, due to the more durable patency of these grafts compared with SVG (21,22). Performing CABG with TAR is a strategy to eliminate the impact of inferior SVG patency rates. TAR induced lower rates of graft failure, potentially decreasing the long-term incidence of death, MI, and TVR (23).

HCR combines the survival benefit of LIMA-LAD graft and the minimal invasion of PCI to non-LAD lesions (24). The greater freedom from atherosclerosis and long-term patency of LIMA-LAD graft make it the standard of care. An effectively revascularized LAD decreases the difficulty and risk of LM PCI and simplifies complex stent procedures to a single LM DES, reducing restenosis and TVR rates (25). The stent extending from the LM to the left circumflex coronary artery (LCX) does not block the flow to LAD due to LIMA-LAD graft. In this study, HCR was completed in two stages, and MIDCAB was performed first in most cases. Performing MIDCAB first avoids conflict between excellent surgical hemostasis and dual antiplatelet therapy for stent implantation (26). Moreover, two-stage HCR obviates the need for a hybrid operating room with specialized imaging systems.

In this study, the safety and efficacy of HCR were compared with that of TAR for treating LM disease. There was a significant difference in preoperative characteristics between the two groups. Surgeons rarely choose elderly patients for TAR because of the limited life expectancy, which reduces the survival benefit of TAR. However, for elderly patients with a high risk of traditional surgery, HCR, a minimally invasive procedure, is a reasonable option and often chosen by surgeons. In this study, IPW was used to eliminate the difference in baseline data between the two groups. After adjustment, the preoperative characteristics of the two groups were comparable.

Most reports comparing HCR with CABG involved patients with multivessel coronary artery disease and demonstrated similar in-hospital and mid-term outcomes (27-30). Halkos and colleagues reported favorable perioperative outcomes and comparable mid-term MACCE and TVR rates of HCR for treating LM disease compared with CABG (31). In this study, the perioperative outcomes of the two groups were comparable, which supports the safety of HCR in the treatment of LM disease. A similar LOS in hospital of the two groups showed that two-stage HCR did not extend the LOS in hospital. We found no differences between the two groups in mid-term outcomes, which further demonstrated that HCR effectively treats LM disease. The patients treated with HCR had higher perioperative and mid-term MI rates than those treated with TAR, but these were not statistically significant after adjustment. Most perioperative MI events happened when patients with high SYNTAX scores waited for PCI after MIDCAB. Performing one-stage HCR in patients with high SYNTAX scores may improve the clinical outcomes of HCR in treating LM disease.

The small sample size and retrospective design of this study are its main limitations. The results of this study should be interpreted as hypothesis-generating and used with caution. The patients undergoing HCR were carefully selected, so generalizing these results to a broader population of LM disease patients is limited by selection bias. Moreover, survival data is limited by the relatively small sample size and short follow-up.

In conclusion, the results of this study suggest that HCR may be safe and effective for treating LM disease compared with TAR.

We thank all the staff in the Department of Cardiac Surgery, Ruijin Hospital for their support during the study.

Reporting Checklist: The authors have completed the STROBE reporting checklist. Available at http://dx.doi.org/10.21037/atm-20-4224

Conflicts of Interest: All authors have completed the ICMJE uniform disclosure form (available at http://dx.doi.org/10.21037/atm-20-4224). The authors have no conflicts of interest to declare.

Ethical Statement: The authors are accountable for all aspects of the work in ensuring that questions related to the accuracy or integrity of any part of the work are appropriately investigated and resolved. The study was conducted in accordance with the Declaration of Helsinki (as revised in 2013). The study was approved by institutional ethics board of Ruijin Hospital (No. 2020-21) and individual consent for this retrospective analysis was waived.