Colorectal cancer is the fifth most common form of malignant tumors in China, with rectal cancer accounting for over 50% of the entire patient population (1,2). Most rectal patients were at locally advanced stages (cT3–4/N+) at the time of diagnosis, due to the mild nature of occult symptoms. Treatment failure in these patients is primarily attributed to local-regional recurrence (LRR). Neoadjuvant chemoradiotherapy (NCRT) has become the standard treatment for locally advanced rectal cancer (LARC) during the past decade (3-8). It can improve local-regional control and didn’t increase surgery complications rate when compared with adjuvant chemoradiotherapy or neoadjuvant radiotherapy. NCRT results in clinically significant tumor regression, where a pathologic complete response (pCR) was a reliable indicator of perfect disease-free survival (DFS) (3,4).

Total mesorectal excision (TME) improved the surgical management of rectal cancer and substantially reduced the local recurrence rate (5-7). However, TME only removes the primary lesion with the mesorectum, where the suspected positive LPLN cannot be eliminated. Distal rectal cancer has an added consideration of poorer prognosis and a positive rate of lateral pelvic lymph node (LPLN) of approximately 11–14% (8-10). In Japan, TME combined with lateral pelvic lymph node dissection (LPLD) was recommended for rectal cancer that extended below the peritoneal reflection due to potential metastases (11). Nevertheless, LPLD need longer operation duration, increased intraoperative bleeding, and has a more significant impact on the pelvic autonomic nerve then resulting in dysuria to a certain extent and sexual dysfunction (12,13). Oncologists in western countries view NCRT as a viable means of treating relatively small LPLN and achieves similar LLR with LPLD (14). Nevertheless, for the larger LPLN, standard chemoradiotherapy may not be sufficient to gain local control in the lateral pelvic region (15-17).

Simultaneous integrated boost intensity-modulated radiation therapy (SIB-IMRT) provides a strong rationale for intensified radiotherapy, delivering higher doses in a shorter timeframe. Studies that evaluated the role of intensified radiation dose with 5FU-based chemotherapy on primary tumors of LARC found a correlation between increased dose and higher pCR rates, along with acceptable toxicity (18). Whether radiation dose escalation is effective for clinically suspected positive LPLN is still unclear. Therefore, this study evaluated the efficacy and safety of SIB-IMRT based NCRT on LARC patients with clinically diagnosed metastatic LPLNs. We present the following article following the STROBE reporting checklist (available at http://dx.doi.org/10.21037/atm-20-4040).

Every patient signed an informed consent form before chemoradiotherapy. The following assessment results were retrospectively recorded: clinical history, physical examinations, colonoscopy, pathologic and radiology examinations, blood tests. The study was conducted in accordance with the Declaration of Helsinki (as revised in 2013). The study was approved by the committee board of Beijing cancer Hospital (No.: 2020YJZ68).

All patients underwent pelvic MRI (1.5T or 3.0T) examination before NCRT. At least 3 T2-weighted section sequences were used: sagittal, coronal, and oblique axial planes. MRI images were evaluated by a radiologist with 10 years of experience in abdominal pelvic radiology, and a radiation oncologist specifically with 5 years’ experience in rectal radiotherapy. The short-axis diameter of LPLNs was measured by the radiation oncologist and screened for highly suspicious lymph nodes. The radiologist subsequently assessed the border contour and presence of mixed-signal intensity of the suspected LPLNs. The diagnostic criteria of clinically suspected positive LPLN were: short diameter ≥7 mm, with irregular lymph node edge or mixed signals (19,20). The mesorectal fascia (MRF) and extramural vascular invasion (EMVI) were also evaluated.

After NCRT, all patients underwent MRI re-evaluation to determine the next course of appropriate treatment, where the majority of patients were advised to attend the multidisciplinary team (MDT) consultation. As metastatic lateral lymph nodes will shrink after radiotherapy, their edge and signal are not viable references for negative diagnoses. The short diameter of the lateral lymph node <5 mm was considered as imaging negative. The radiation oncologist and radiologist read the MRI scans together to assess the volume change of LPLN (Figure 1).

All patients underwent contrast-enhanced computed tomography (CT) and MRI simulations with 5 mm slice thickness, in the supine position with a full bladder and empty rectum. Target delineation was based on CT and MRI fused imaging. The gross tumor volume (GTV) consisted of GTVp and GTVn. GTVp was defined as the primary lesion and the metastatic mesorectal lymph nodes. GTVn was defined as metastatic LPLNs. Clinical tumor volume (CTV) was defined as the mesorectal and presacral regions, obturator, and internal iliac lymph node drainage area, with a 2-cm margin from the superior and inferior extents of the primary lesion in the rectum. Planning gross target volume (PGTVp/PGTVn) and planning target volume (PTV) was determined by the addition of a 0.5-cm margin to the GTVp/GTVn and CTV, respectively. 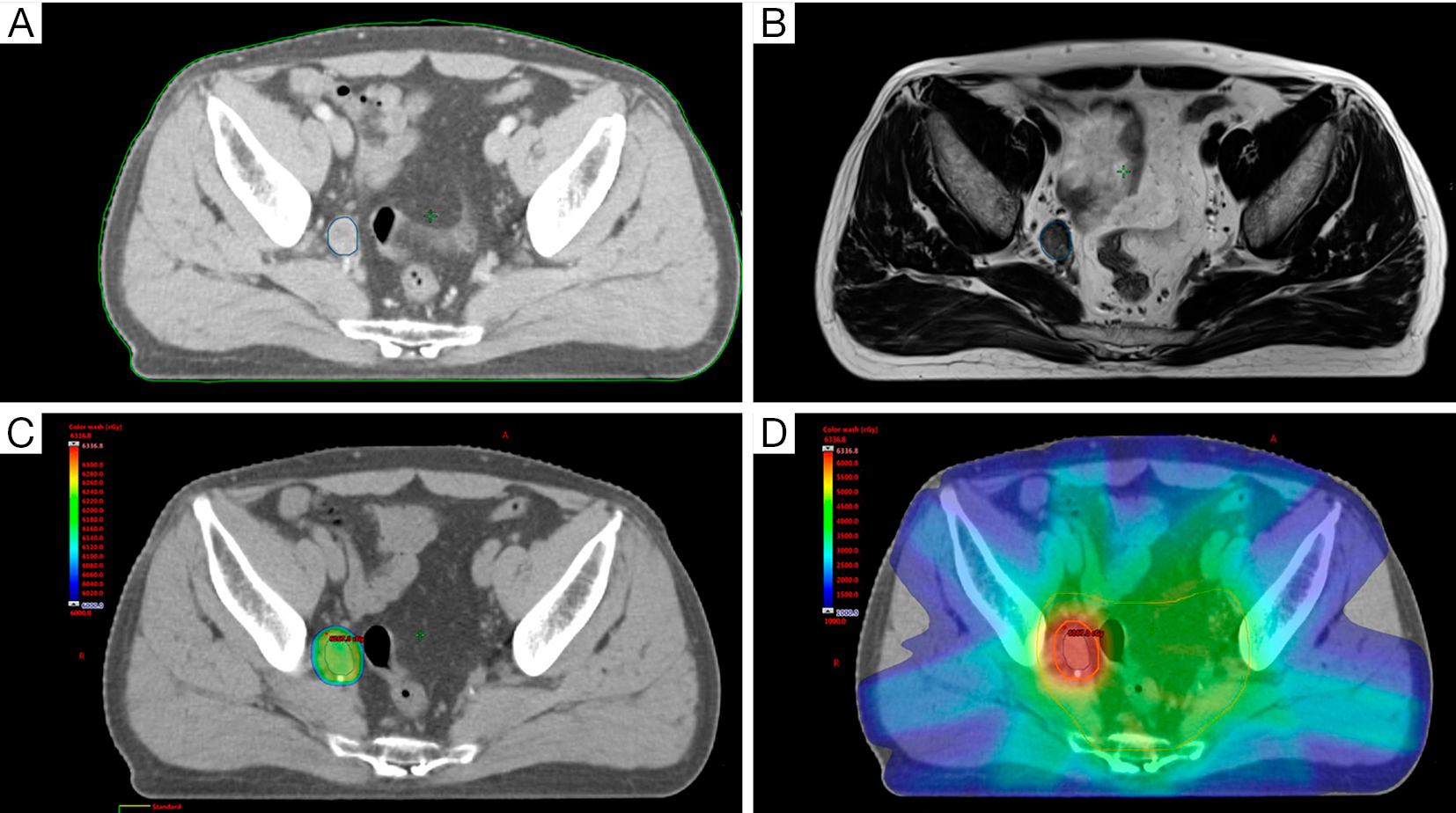 Organs at risk (OARs) were identified as the bladder, sigmoid, small bowel, and femoral heads. The recommended dose constraints referred to the QUANTEC review (23).

Specimens from each patient underwent a standardized pathology examination. Tumors were staged according to the seventh edition of the American Joint Committee on Cancer TNM classification.

Adverse event assessments were performed for all patients every week during the NCRT and subsequently monthly after the treatment. Treatment-related toxicities were assessed according to the Common Terminology Criteria Adverse Events Version 4.0 (CTCAE v4.0).

Patients were followed up every 3 months during the first 2 years post-surgery, every 6 months for the next 3 years, and then annually for the subsequent 5 years. Evaluations consisted of physical examinations, chest CT, pelvic CT or MRI, carcinoembryonic antigen (CEA) and other blood assessments. Colonoscopy was performed if clinically required.

A total of 586 LARC who receive NCRT were screened in our center, and 52 patients with positive clinical LPLN who received neoadjuvant SIB-IMRT, based chemoradiotherapy and operation, were included (Table 1). The median short diameter of lateral lymph nodes was 8 mm (range, 7–20 mm). Concerning clinical T/N staging diagnoses by MRI, 39 patients (75.0%) were diagnosed as cN2, and 8 (15.4%) patients were staged T4. There were 28 (53.8%) MRF positive, and 22 (42.3%) EMVI positive patients. During treatment, 31 (59.6%) patients received 60 Gy to the lateral lymph node, and other patients were below this dose, 32 (61.5%) patients were assigned to synchronous single capecitabine agent. Furthermore, 21 (40.4%) patients received additional neoadjuvant chemotherapy.

After rigorous radiological and physical examinations (range, 8–17 weeks after chemoradiotherapy), all patients underwent rectal tumor excisions in the surgical department of our center. Among them, 23 patients received APR, and 23 received LAR. Eight patients (15.4%) underwent additional LPLD, and positive nodes (26 nodes in total) were not observed. The details between the two patient groups are displayed in Table 2.

During NCRT, no patients underwent toxicity-related radiotherapy interruption or dose reduction. Also, no treatment-related deaths were observed. Fifty-one (98.1%) patients completed full dose synchronous chemotherapy without any incidences of grade 4 toxicity. Fifteen (28.8%) patients exhibited grade 2–3 radiation-related toxicity, with 6 (18.8%) observed in the capecitabine group and 9 (45.0%) in the CapOX group, among whom 1 patient displayed grade 3 neutropenia. The incidence rates were significantly different between the two synchronous chemotherapy groups (P=0.042). The details of the toxicities are exhibited in Table 3. 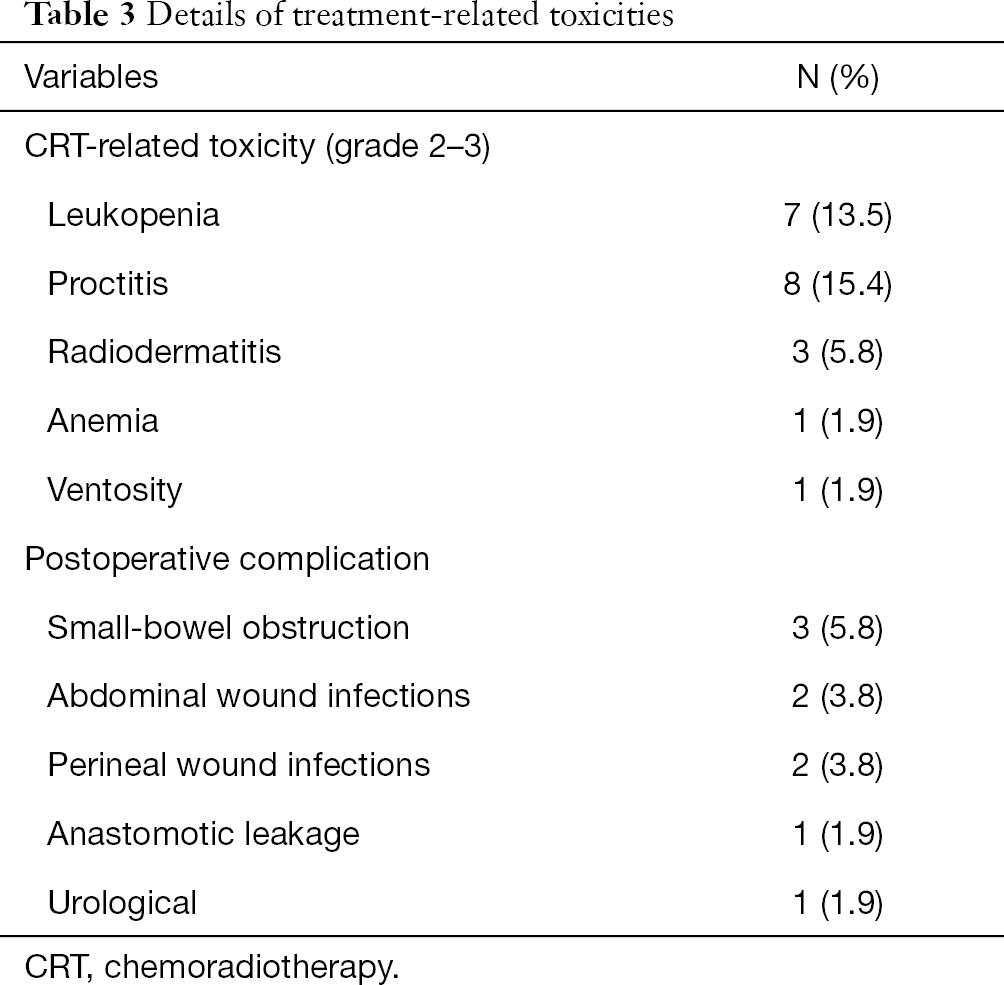 Figure 3 The Kaplan-Meier curve of local-regional recurrence (LRR) (A) and disease-free survival (DFS) (B).

In this retrospective study, only 8 patients were found to require LPLD after SIB-IMRT, with the remaining patients identified as negative for LPLN. During 21.2 months of follow-up, the 2-year LRR and DFS were 2.4% and 74.6%, respectively. The preliminary results show that the toxicity was acceptable without LPLN recurrence in the SIB-IMRT region.

Since NCRT combined with TME has become the established treatment for distal LARC, the local recurrence rates within the anastomotic stoma and mesorectal area have been significantly reduced. Nevertheless, lateral pelvic recurrence has emerged as a dominant issue. One study from Korea indicated that lateral pelvic recurrence contributed to 80% of LRR for LARC after NCRT and surgery. Distal rectal cancers displayed a higher susceptibility to LPLN metastasis. This is due to the anatomical characteristics around lymph node drainage: lymphatic vessels below the peritoneal reflection converge into the internal iliac lymph nodes, which subsequently drain to other lateral lymph nodes (9).

However, the diagnostic criteria for positive LPLN are still controversial. Brown and his team used sectioned surgical specimens to evaluate the suspected lymph nodes. The results indicated irregular border or mixed signals as an indicator of high susceptibility toa positive lymph node (24). The JCOG0212 study analyzed 328 patients who received LPLD. The results demonstrated that 24 (7.3%) patients were pathologically undergoing LPLN metastasis.

For patients with positive LPLN, additional LPLD may bring survival benefits. However, some studies suggested that the LPLD could affect men’s sexual activity and urine function (12,13). Therefore, non-invasive treatments which enhance the local treatment effect and ensure safety was urgently needed. With the development of precise radiotherapy technology, the SIB-IMRT technique can optimize the dose applied to the target area while protecting normal tissues. The higher dose has previously achieved satisfactory results in the treatment of primary rectal lesions. According to Burbach’s meta-analysis of 14 studies, the ideal pCR rate and acceptable side effects were achieved at the radiation dose of ≥60 Gy, in 1,106 LARC patients who underwent NCRT and 487 patients treated with radiation boost (25). Marco analyzed 76 LARC patients who received SIB-IMRT. The median SIB dose was identified as 54 Gy, with 20 (26.3%) patients shown to achieve pCR. However, the efficacy of radiation dose escalation for clinically suspected positive LPLN remains unclear.

To our knowledge, this is the first retrospective study aimed to explore the potential of SIB-IMRT on clinically suspected positive LPLNs followed by TME in achieving relatively good prognoses without increasing side effects. In this study, patients with positive LPLN received 56–60 Gy by SIB-IMRT (EQD2 =59–65.3 Gy). Only 8 patients received LPLD after SIB-IMRT, and positive LPLNs were not detected. Only 1 patient displayed LRR. However, the area of recurrence was not the target site, which received a high-dose of radiotherapy. The LRR of the boost irradiation area was 100%. No LPLN recurrence was noted in the SIB-IMRT region. The results illustrated good regulation of the clinically positive LPLN after SIB-IMRT.

Preliminary results demonstrated acceptable acute toxicity. In this study, grade 2–3 toxicities during SIB-IMRT were observed at only 28.1%. Additionally, most of these toxicities were attributed to synchronous chemotherapy. Severe perioperative complications were not exhibited, and the rate of surgical complications was also deemed acceptable. However, long-term toxicities are still unclear and require further investigations.

In clinical practice settings, patients with clinically suspected positive LPLN consistently exhibit additional high-risk factors such as positive MRF and EMVI status, which are also linked with poor local control and survival (26,27). Our study was comprised of 28 (53.8%) MRF positive, and 22 (42.3%) EMVI positive patients. During the follow-up period, 11 patients (21.1%) exhibited distant metastases, and the 2-year DFS was revealed to be 74.6%, which is worse than the previous study on LARC (22).

This retrospective study has some limitations. Firstly, this was a single-center study with a limited patient number. Secondly, the pathological confirmation of LPLN was not available due to the absence of biopsies. The imaging diagnosis standard may have omitted some positive lymph nodes, while specific normal lymph nodes could have been over diagnosed, which potentially led to unnecessary treatment. Lastly, we used LRR and DFS as a measure of long-term outcomes due to the short follow-up duration even though DFS has been proven to be related to overall survival (28). A larger cohort and multicenter design are required for future studies with long term follow-up to acquire robust data.

Reporting Checklist: The authors have completed the STROBE reporting checklist. Available at http://dx.doi.org/10.21037/atm-20-4040

Conflicts of Interest: All authors have completed the ICMJE uniform disclosure form (available at http://dx.doi.org/10.21037/atm-20-4040). The authors have no conflicts of interest to declare.

Ethical Statement: The authors are accountable for all aspects of the work in ensuring that questions related to the accuracy or integrity of any part of the work are appropriately investigated and resolved. Every patient signed an informed consent form before chemoradiotherapy. The study was conducted in accordance with the Declaration of Helsinki (as revised in 2013). The study was approved by the committee board of Beijing cancer Hospital (NO.: 2020YJZ71).