Percutaneous transthoracic needle biopsy (PTNB) is a minimally invasive and safe procedure widely used for diagnosing lung lesions and the analysis of molecular alterations in clinical practice (1-5). Up to 2.9–54.5% of patients who undergo PTNB develop hemorrhage (3,6-10). Reported risk factors for pulmonary hemorrhage include penetration of blood vessels in the lung (11,12). Although most pulmonary hemorrhage is mild and self-limiting, severe hemorrhage might also occur during PTNB (8,13).

Contrast-enhanced computed tomography (CECT) has the advantage of clearly visualizing blood supply within the lesion and aiding in blood vessels' imaging. We, therefore, postulate that CECT could be used to reduce hemorrhage. The British Thoracic Society guidelines recommend performing computed tomography (CT) scan before lung biopsy (14), but do not mention whether or not CECT scans should be performed. Compared with non-contrast CT, CECT facilitates more accurate blood vessel imaging, particularly small vessels (15). Previous reports have indicated that most patients undergo CECT scans before the intervention to evaluate the feasibility of biopsy (10,16), but no large cohort study evaluating the effect of pre-biopsy CECT on hemorrhage after a biopsy has been conducted. Therefore, we assessed the efficacy of pre-biopsy CECT in reducing PTNB-related hemorrhage. In the present study, we compared hemorrhage rates between the non-contrast CT and the CECT groups and identified the risk factors associated with pulmonary hemorrhage during the biopsy.

We present the following article following the STROBE reporting checklist (available at http://dx.doi.org/10.21037/atm-20-4384).

We retrospectively reviewed 1,430 biopsy procedures, which were performed on 1,370 patients between November 2011 and February 2016 in Jinling Hospital, Nanjing, China. To avoid the impact of repeat puncture targeting the same lesion on hemorrhage rates, for cases with repeated biopsies (49 patients), only the first biopsy was included in the analysis. Fifty patients with incomplete medical data were also excluded. Finally, a total of 1,271 patients (1,282 biopsies) were enrolled, including 11 patients with 2 independent lesions; the second biopsies were defined as independent incidences (Figure 1). The present study was conducted following the Declaration of Helsinki (as revised in 2013) and approved by the institutional review board of Jinling Hospital (No. 2017NZHX-022). All data were retrieved from a prospectively collected electronic database. Informed consent from individuals was waived due to the retrospective, observational, and anonymous nature of the current study. 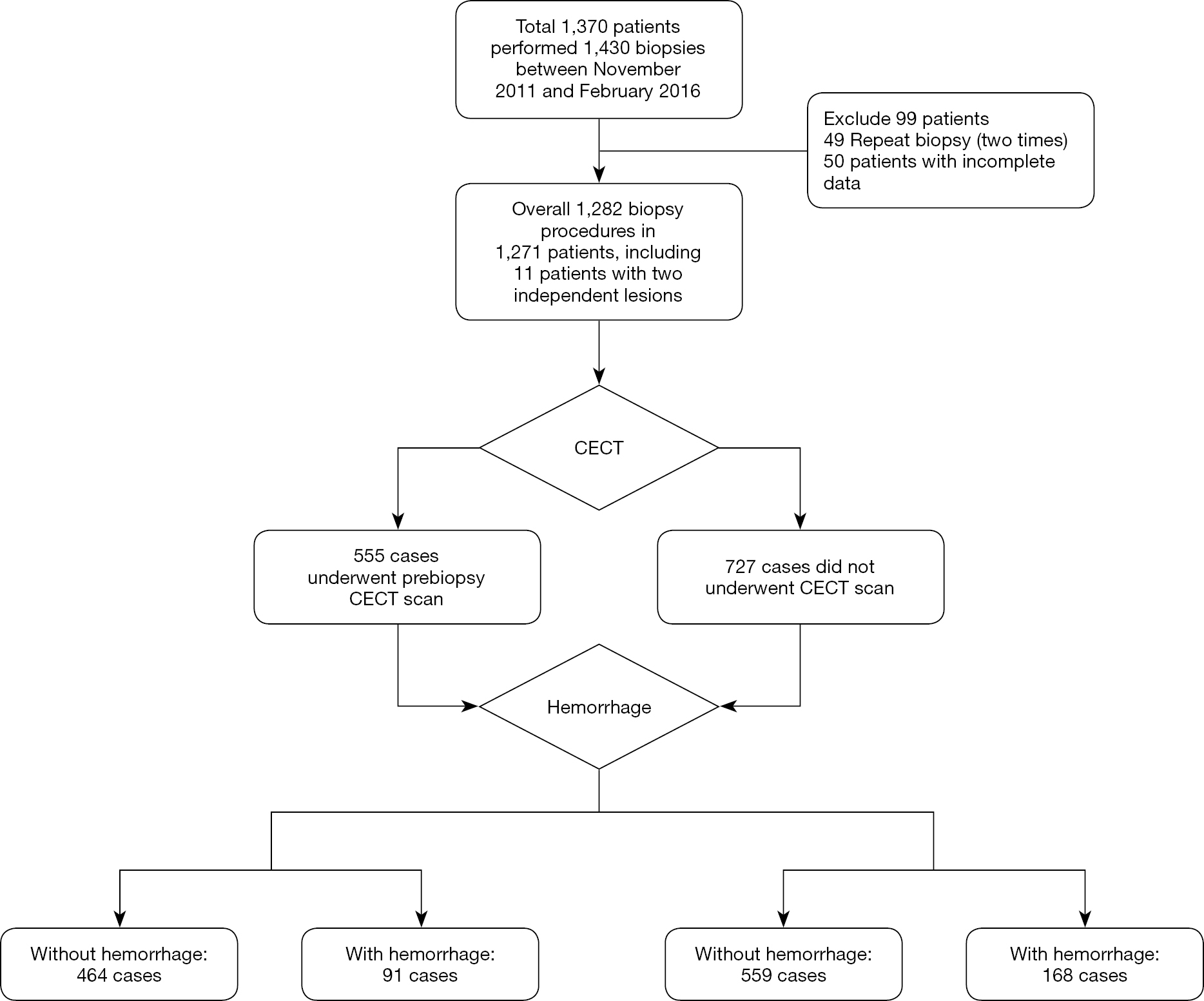 Patients included in the present study had focal lung lesions appearing as a nodule or a mass. Laboratory indices relevant to the hemorrhage complication, such as prothrombin time, activated partial thromboplastin time, international normalized ratio, and platelet count within 1 week of undergoing PTNB, were normal. Patients with a medical history of anticoagulant or antiplatelet medication use were required to stop taking medication at least 5 days before puncture, and those patients have also included if re-examination of coagulation was normal. Those who could not follow verbal or visual instruction and/or accept procedure-related risks were excluded from the study.

A helical CT scanner (SOMATOM Spirit; Siemens Medical Systems, Forchheim, Germany) and BARD MAGNUM 18-gauge cutting needles (Bard Peripheral Vascular, Inc., Tempe, Arizona, USA) were used. All patients underwent either chest CECT or non-contrast CT before the biopsy. Following a review of the pre-biopsy CT images, the optimal needle path was planned to perforate the least amount of aerated lung. Following sterilization and local anesthesia, a coaxial 18-gauge needle was inserted through the chest wall and moved towards the lesion. CT images were instantly procured to evaluate the biopsy needle and pulmonary nodule's position at the desired depth. The procedure was continued only if the needle was at an appropriate site within or near the lesions, and the operator triggered the biopsy switch to trap the tissue specimens. Biopsy specimens were then preserved in 10% buffered formalin for pathological examination. After withdrawing the biopsy needle, a post-biopsy CT scan was immediately performed to assess possible complications, and the patient was required to stay in the supine position for at least 6 h. A chest radiograph was generally performed the following day. All patients who underwent PTNB were inpatients, and if required after the biopsy, received oxygen therapy or hemostatic drugs, or underwent chest drainage or pulmonary artery embolization.

All statistical analyses were performed using SPSS version 17 (SPSS, Chicago, IL, USA). Univariate analyses of categorical variables, such as sex and biopsy positions, were performed using χ2-test and Fisher’s exact test, and continuous variables with skewed distributions were compared using the Mann-Whitney U-test. Multivariate logistic regression analyses of selected variables were performed to evaluate the effect of pre-biopsy CECT on hemorrhage rates and to determine the risk factors associated with hemorrhage. To demonstrate the effect of pre-biopsy CECT on hemorrhage rates, PSM was conducted by MatchIt package in R with nearest-neighbor 1:1, 2:1, and 3:1 matching. Differences and associations were considered significant when P<0.05. 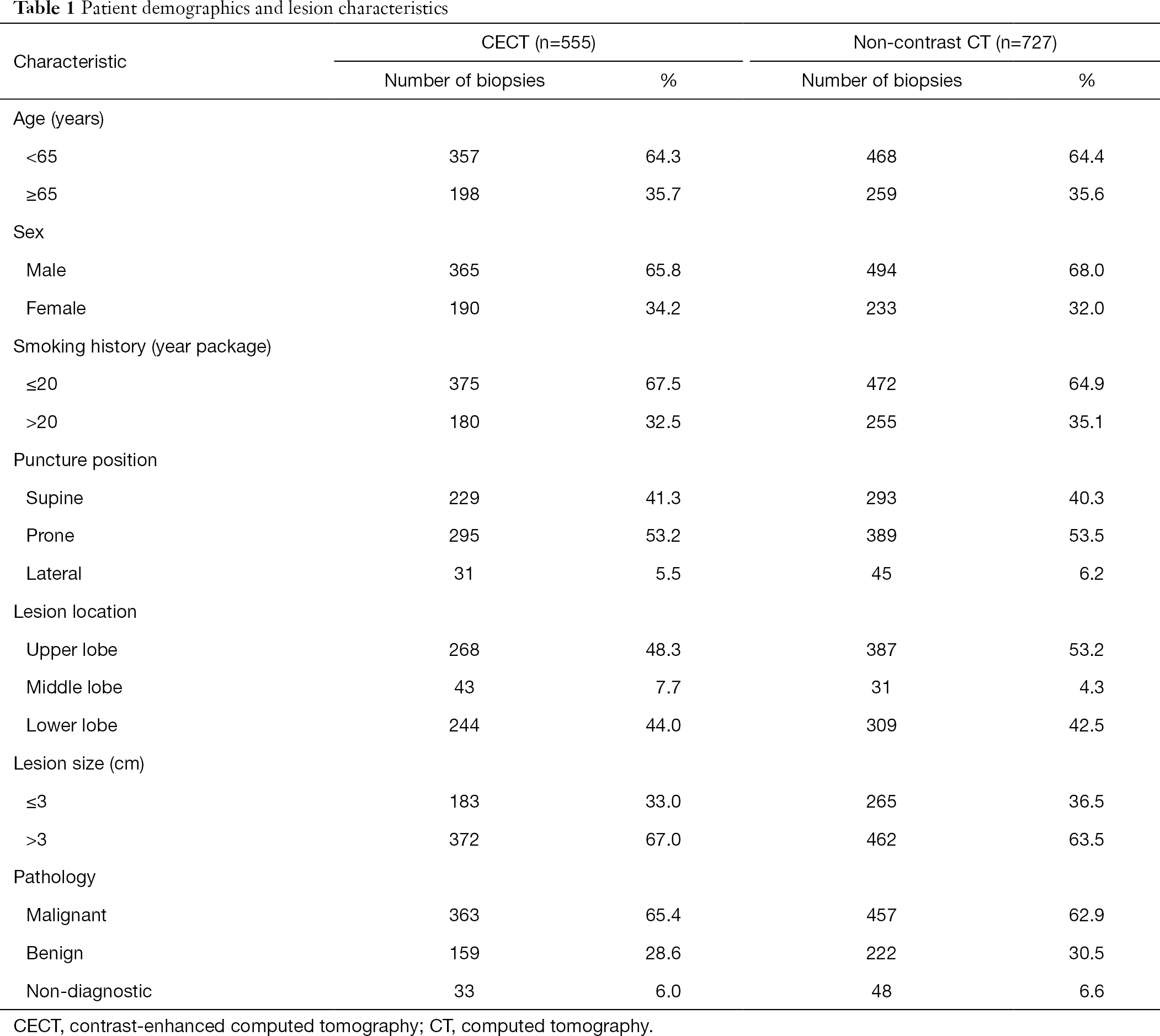 Association of CECT with the reduced incidence of post-biopsy hemorrhage

Also, vessel distribution observed by CECT, either in the peripheral (P=0.016) or internal (P=0.000) lesion, was associated with post-biopsy hemorrhage (Table 3).

To reduce bias, PSM analysis was performed. In the CECT and the non-contrast CT groups, the following factors were matched by the MatchIt package in R, with nearest-neighbor 1:1, 2:1, and 3:1 matching: sex, age, smoking history, lesion location, puncture position, size of the lesion, number of punctures, and depth of the needle tract (Table 4). According to 1:1 matching of hemorrhage and non-hemorrhage cases, the distribution of the propensity score is shown in Figure 2A. A significant negative relationship was found between pre-biopsy CECT and pulmonary hemorrhage (P=0.039). Figure 2B,C shows the distribution of the propensity score from matching at a ratio of 1:2 (P=0.028) and 1:3 (P=0.013), respectively. 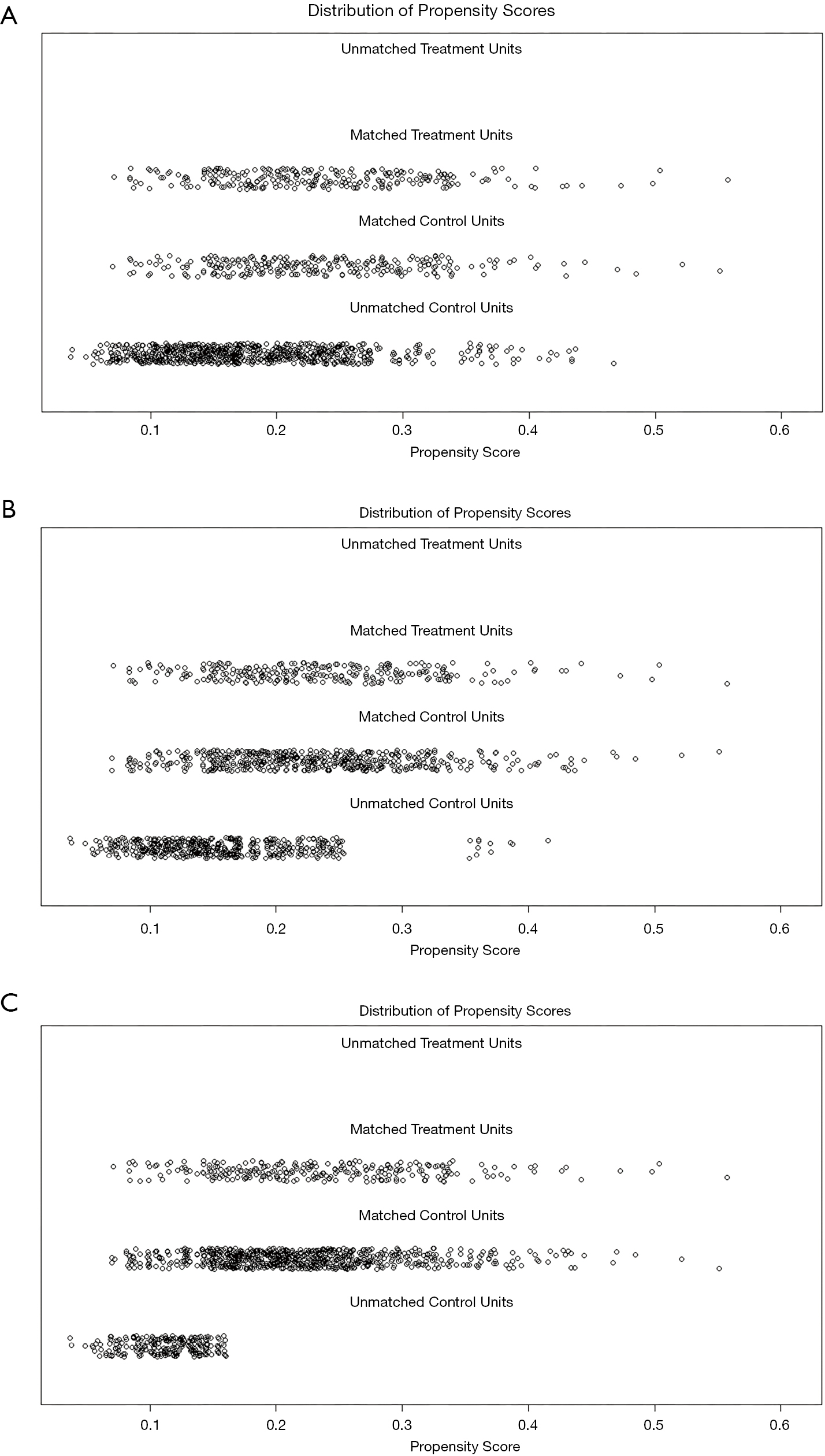 Figure 2 Propensity score distribution of hemorrhage and non-hemorrhage patients after matching at different ratios. (A) 1:1; (B) 1:2; (C) 1:3. 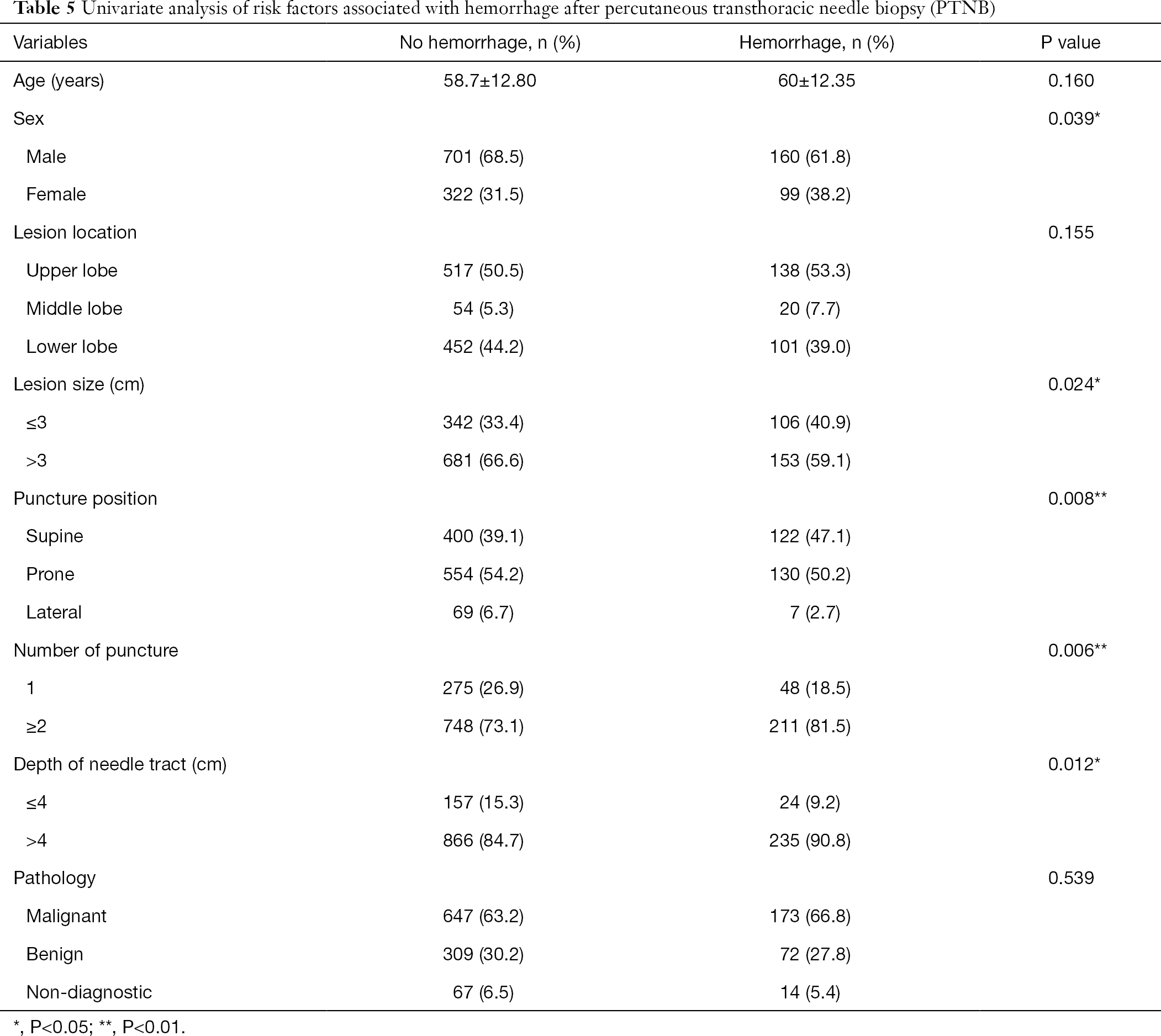 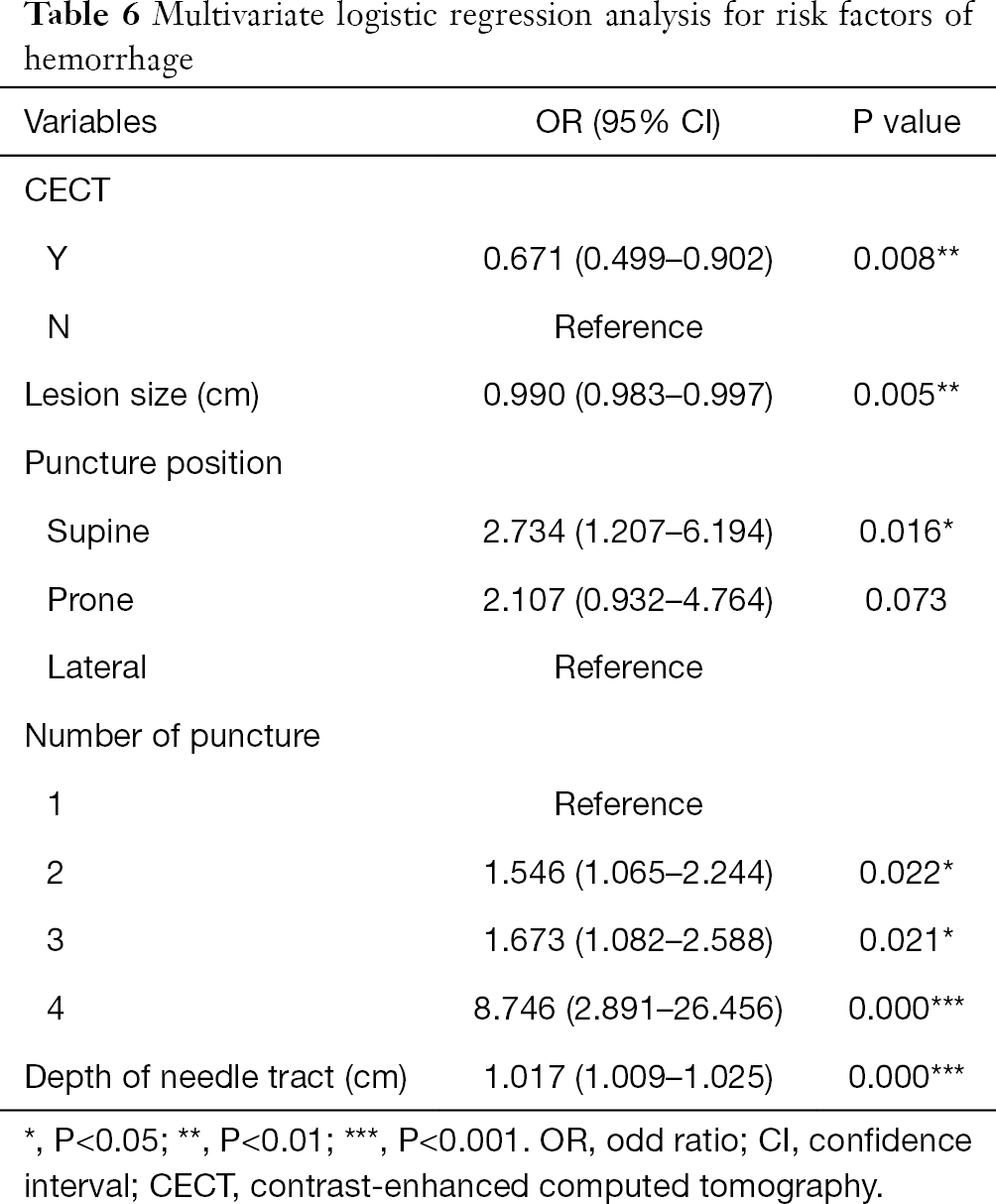 To the best of our knowledge, the present study is the first large-sample comparative study to assess if pre-biopsy CECT could reduce hemorrhage incidence. We retrospectively reviewed 1,282 PTNB and found that pre-biopsy CECT was associated with a reduced incidence of biopsy-related hemorrhage compared with non-contrast CT (16.4% vs. 23.1%, P=0.003). CECT before PTNB could also reduce post-biopsy hemorrhage risk (OR: 0.671, 95% CI: 0.499–0.902, P=0.008).

CECT has been used to distinguish malignant lung lesions from benign lung lesions, evaluate indeterminate pulmonary nodules, and predict lung adenocarcinoma pathological grades (17-20). In the present study, the risk of pulmonary hemorrhage remarkably decreased when pre-biopsy CECT was performed, demonstrating the advantages of pre-biopsy CECT in the assessment of vascular distribution. To minimize hemorrhage caused by needle biopsy, Wu et al. suggested that major central blood vessels and systemic arteries should be avoided (7). A previous report showed that blood vessels that are not visible on non-contrast CT images might be visible on CECT images (15). Nour-Eldin et al. showed that needle tracks across pulmonary blood vessels could increase hemorrhage risk (11). Similarly, the incidence of hemorrhage increased in the presence of abundant internal blood vessels or margins surrounded by blood vessels in the present study. The present study also confirmed that small blood vessels were significantly enhanced in arterial and venous phases on CECT images, facilitating more accurate identification of suitable puncture routes that avoid blood vessels.

Baadh et al. showed that using a track embolization technique with absorbable hemostat gelatin powder reduces hemorrhage (21). A limitation of this method was that the duration of the overall procedure, which was extended by approximately 1–2 min, potentially increased the risk of pneumothorax. Khan et al. also showed that pneumothorax rates significantly increased with an increase in puncture time. Compared with track embolization techniques, pre-biopsy CECT does not potentially increase the incidence of complications associated with puncture. The risks associated with the administration of intravenous injection iodine-based contrast agents, such as impaired renal function, contrast extravasation, and allergic reactions, were low if a full medical history and a history of allergies were provided. Therefore, we recommend using this convenient and safe technique before the biopsy to reduce pulmonary hemorrhage, which is the second most prevalent complication of PTNB.

As reported in previous studies, pulmonary hemorrhage is affected by factors, such as sex, site of the lesion, size of the lesion, and depth of the needle tract (22-24). Our PSM analysis excluded the effects of confounding factors and confirmed that pre-biopsy CECT reduced PTNB-related hemorrhage. Significant differences in hemorrhage ratios between the pre-biopsy CECT and the non-CECT groups were observed in 1:1, 1:2, and 1:3 matching analyses, providing further evidence pre-biopsy CECT reduces the hemorrhage rate in patients undergoing PTNB. Previous research assessing risk factors of hemorrhage complicating needle biopsy did not involve methods, such as PSM, to control the influence of confounding factors. Therefore, to our knowledge, the present study is the first large-sample study to convincingly demonstrate that pre-biopsy CECT scans can be used to reduce the risk of pulmonary hemorrhage complications in patients undergoing PTNB.

Although our research has significant clinical value, it has several limitations. Biopsy procedures were conducted by experienced Operators, the differences between operators were not considered, which might affect the incidence of complication.

Second, it was a retrospective and single-center study, which could introduce unavoidable bias. For example, at the early stage, the role of CECT may not be recognized and the proportion of performing CECT was relatively low compared to the later stage, which might introduce distribution bias. Our findings should be validated in future studies with larger cohorts from multi-centers.

The present study confirmed that pre-biopsy CECT was an effective tool to prevent pulmonary hemorrhage. Further studies are required to establish CECT as a routine pre-biopsy procedure in patients scheduled to undergo PTNB.

Reporting Checklist: The authors have completed the STROBE reporting checklist. Available at: http://dx.doi.org/10.21037/atm-20-4384

Conflicts of Interest: All authors have completed the ICMJE uniform disclosure form (available at http://dx.doi.org/10.21037/atm-20-4384). The authors have no conflicts of interest to declare.

Ethical Statement: The authors are accountable for all aspects of the work in ensuring that questions related to the accuracy or integrity of any part of the work are appropriately investigated and resolved. This study was conducted in accordance with the Declaration of Helsinki (as revised in 2013) and approved by the institutional review board of Jinling Hospital (No. 2017NZHX-022). Informed consent from individuals for this retrospective analysis was waived.