Myopia, which has recently undergone an unprecedented rise, becomes a global health problem (1). It is estimated that by 2050 approximately 50% of the world’s population may be myopic, and that 10% of the population may be highly myopic (2). Though there are several refractive surgeries to correct myopia (3). Controlling myopia progression is always the most paramount topic. Strategies such as spectacles, contact lenses, orthokeratology, and pharmaceutical treatment are applied worldwide (4,5). Because with the progression of myopia, risks of various ocular pathologies increase, including but not limited to cataracts, glaucoma, retinal detachment, and macular degeneration (6).

Optical coherence tomography angiography (OCTA) enables 3D visualization of the microvasculature by performing repeated B-scans to detect motion contrast. Multiple repeated B-scans are compared pixel by pixel to detect signal changes which occur due to flowing erythrocyte (7). OCTA has the advantage of depth resolution, high contrast, well-defined image and non-invasive fashion. Up to now, OCTA is applied in several ocular pathology diagnosis, such as uveitis, cornea vascularization and retinal disease (8-10).

It has been reported that the average retinal blood flow and vessel diameter were significantly decreased in highly myopic eyes compared to normal eyes (11,12). However, identical vessel density in anisometropia induced amblyopic eyes also has been observed (13). These inconsistent results inspired us to search for the root cause. Besides the effect of amblyopia, the error originated from magnification correction might partly explain these varied results. Because the error caused by magnification correction could result in variation of −20% to +10% in vessel density values (14). Furthermore, most studies investigated differences between groups, but deviations among individuals were relatively high.

Notably, anisometropia is a natural model for within-patient comparisons, which minimizes the effects of individual differences. The principle of treating anisometropia is to restore balanced sensory ocular dominance between paired eyes (15). Effective strategies include refractive surgery and rigid gas permeable (16,17). Refractive anisometropia develops primarily through the influence of changes in the posterior segment of the eye, as indicated by previous histology and population-based studies (18,19). However, the differences in bilateral fundus pathology, which is particularly crucial in patients with high myopia, are not yet fully characterized. For anisometropic eyes, the impact of varying ocular size on fundus pathology is unknown.

Thus, using the model of anisometropia, we aimed to investigate the role of magnification correction in vessel density analysis using OCTA, which may aid understanding anisometropia’s pathology.

This study was approved by the Ethics Committee of the Eye, Ear, Nose, and Throat (EENT) Hospital of Fudan University (No. 2016036) and was performed in accordance with the principles of the Declaration of Helsinki (as revised in 2013). Written informed consent was acquired from each patient.

Patients with ΔSE of −0.5 D or less were enrolled as the control group.

ZEISS AngioPlexTM OCT (AngioPlex software, version 10.0; USA) was used to acquire high-resolution images of the retinal microvasculature. The procedures and assessments were in accordance with those of a previous study (20). Vessel length density (VLD, defined as the total length of perfused vasculature per unit area in a region of measurement) and perfusion density (PD, defined as the total area of perfused vasculature per unit in a region of measurement) were assessed via the prototype algorithm provided by Zeiss Meditec. One standard 3 mm × 3 mm scanning pattern was used for all patients. In accordance with the Early Treatment of Diabetic Retinopathy Study, vessel density was quantified in a set of five regions (Figure 1), thereby automatically producing a mean value of the entire scan area. Presently, the software only reported vessel density values in the superficial capillary plexus, which extends from the outer boundary of the inner limiting membrane to the outer boundary of the inner plexiform layer. The foveal avascular zone area (FAZA) is automatically outlined and calculated. 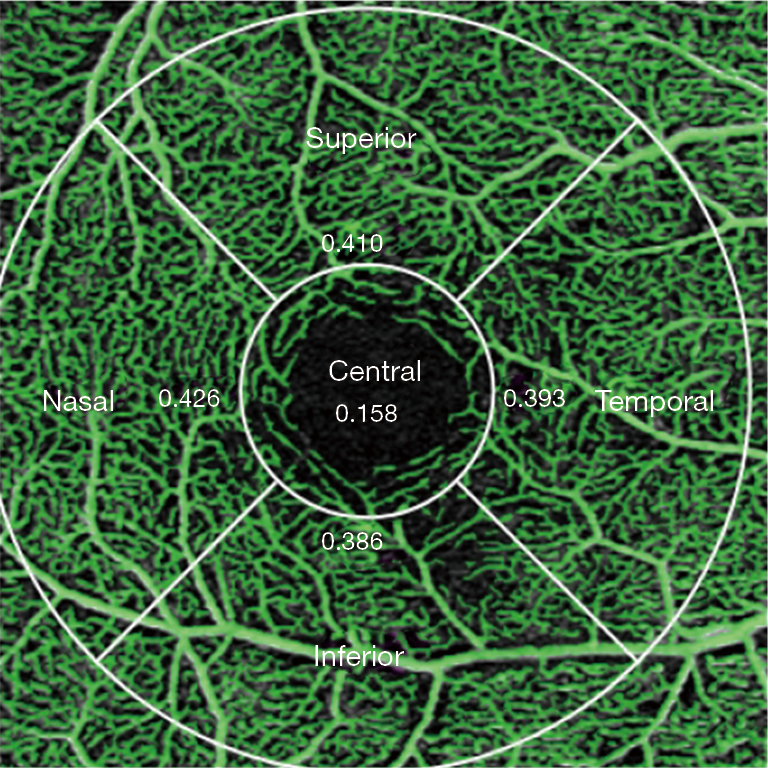 Each scan was repeated three times, and patients were instructed to close their eyes for 30 s at the interval. The scan with best signal strength was used for analysis, and the prior scan was used if two or three images had the same signal strength. All procedures were performed under the same illumination by one trained examiner, and only images with signal strength of ≥7 points (full score is 10 points) were included in the analysis.

To account for the differences in axial length in the anisometric cohort, a transverse OCT scaling factor based on axial length was calculated for each eye individually. Images were corrected for magnification using Bennett’s formula (21). The use of axial length was demonstrated to be the simplest and most accurate method of magnification correction (22). The relationship between a measured SD-OCT image (the measurement circle in this case) and its actual size can be expressed as t = p × q × s, where t is the actual size of an object on the retina, s is the SD-OCT measurement, p is the magnification factor related to the OCT’s camera [3.382 in Cirrus HD (23)], and q is the magnification factor related to the eye [q =0.01306 × (axial −1.82)].

Data analysis was performed using SPSS 22.0 (SPSS, Inc., Chicago, IL). All data are described as mean ± standard deviation. A paired t-test was used to compare bilateral eyes with a normal distribution, and Pearson’s correlation was used to analyze associations between variables. For non-normally distributed data, the Wilcoxon signed-rank test and Spearman’s rank-order correlation were used. Differences before and after axial correction were determined using a paired t-test. P values of <0.05 were considered statistically significant. 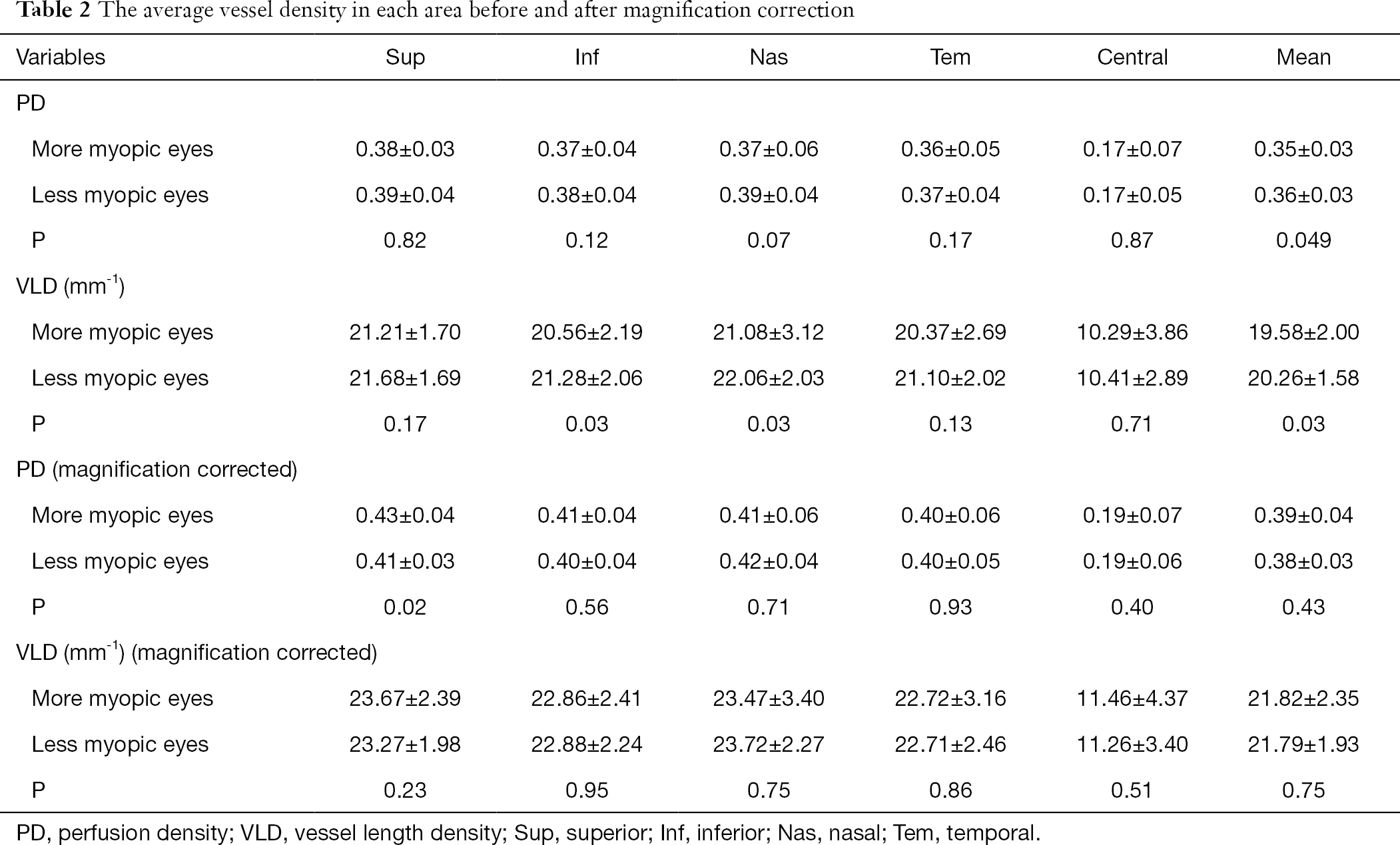 After magnification correction, the VLD between paired eyes has no difference, while in the superior area, higher PD was observed in the more myopic eyes (P=0.02). 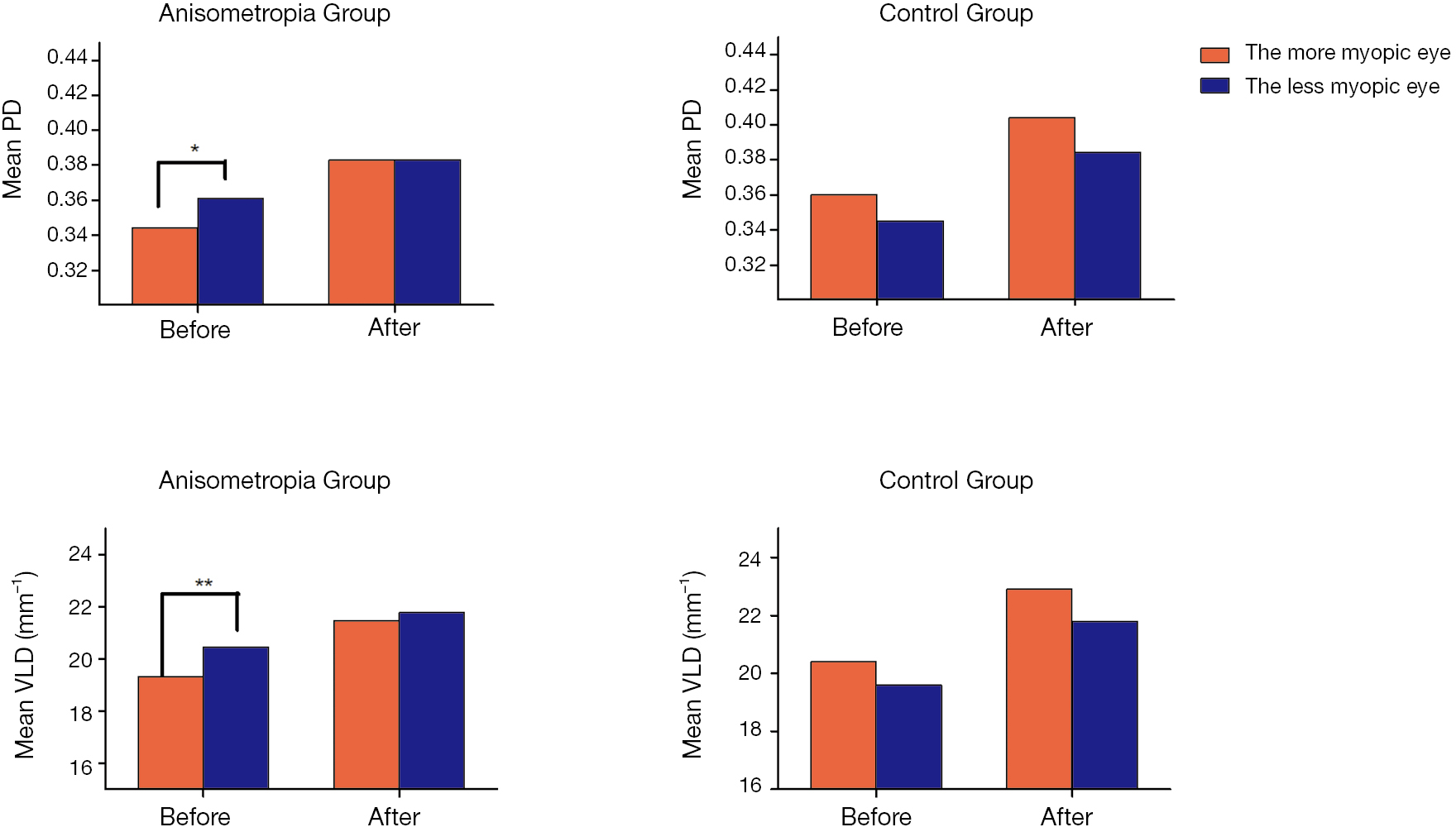 We did not identify a correlation between ΔSE and vessel density difference (ΔVLD/PD, values in the less myopic eyes minus that of the more myopic eyes) before or after correction. However, the magnification-induced error (ΔVLDbefore − ΔVLDafter) increased with the absolute ΔSE (r=0.86, P<0.001), and similar results were also detected in ΔPDbefore − ΔPDafter with the absolute ΔSE (r=0.86, P<0.001) (Figure 3).

Based on a previous report of significantly decreased blood flow in highly myopic eyes (24), the present study only enrolled patients with high myopia. Our study demonstrated that magnification correction should be performed in retinal vessel density analysis.

Without magnification correction, vessel density was generally lower in eyes with higher myopia, which is in accordance with previous study (25). With magnification correction, there are some conflicting results. Yang et al. (26) found that the large and micro vessel density in the retina declined in highly myopic eyes, while Cheung et al. (27) found greater vessel density in eyes with longer axial lengths. We found no difference in macular vessel density with varying axial length. In addition to the different scanners and calculation algorithms used in different studies, the varying inclusion criteria might also have contributed to this discrepancy. Cheung’s study enrolled patients with continuous refractive error, and in Yang’s study, the mean difference in SE between the high myopia and control groups was approximately 8.0 D, while in our study, the mean difference in SE was 2.5 D between paired eyes. Thus, we speculate there may exist a refractive error threshold value that can be used to distinguish vessel density; however, this requires confirmation in further study.

In terms of anisometropia, the current results revealed no difference in vessel density in paired eyes. This indicates that the retina is not the only target of ocular growth modulation. This is consistent with the findings of Huang et al. (28), who found that, in addition to producing central refractive errors, abnormal visual experience can alter the shape of the posterior globe and cause peripheral refractive errors in infant primates. The vitreous chamber, for example, can be modulated to correct for refractive or axial anisometropia.

The balanced vessel density distribution is in accordance with the identical visual acuity observed in the current study. Lonngi et al. (29) observed significantly decreased vessel density in patients with amblyopia. Demirayak et al. (30) also found lower vessel density in amblyopic eyes than fellow eyes. Amblyopia means different corrected visual acuity in paired eyes. That is the key point that distinguishes our study from the two references above, resulting to no difference in vessel density between the eyes. This result inspired the hypothesis that visual acuity can be an indicator of retinal vessel circulation change. Similar results were derived from Liu’s study (31) that vessel density was a prominent factor affecting visual acuity. The underlying mechanism may be that nerve fiber and ganglion cell layer receive blood from the superficial retinal vascular plexus and the degree of perfusion may impact visual performance (32). This indicated that both refraction error and visual acuity should be considered when assessing retinal condition (33).

In addition to vessel density, other OCT findings are affected by magnification correction. Retinal nerve fiber thickness (RNFL) was considered to be negatively correlated with axial length, while the correlation was eliminated after magnification correction in the study by Kausar (34). Using the same scanner (Cirrus HD-OCT) as that used in the present study, Savini et al. (35) found that correcting for axial length resolved the relationship between axial length and the RNFL and optic nerve head. Moghimi et al. (36) concluded that ocular magnification is necessary in optical disc and neuroretinal rim area measurement. The present study findings are in agreement with previous studies that axial length affects the measurement values of retinal parameters and should be considered in retinal analysis.

We did not detect differences in the FAZA between paired eyes before and after magnification correction. This is consistent with Fujiwara’s (37) conclusion that the FAZA is associated with vessel density rather than axial length. One possible reason is that the enrolled eyes were high myopic without pathological changes. We speculate that magnification would have a greater impact in diseased eyes, because pathologic capillary dropout can alter the boundary of the FAZ as well as its size.

The current study has several limitations. One is the relatively small sample size, from which several cases were excluded due to unstable fixation or low signal strength (26). Further studies comparing the vessels of the deep or middle layers of the retina are recommended. The ΔSE values used to categorize patients into the anisometropia and control groups were arbitrary. Different threshold values may yield different results, but we speculate that the overall trend will remain unchanged. Studies with a larger sample size and more detailed analyses are warranted.

In summary, for macular vascular image analysis, differences in image magnification due to different refractive errors require correction before analysis. No difference was found in paired eyes of anisometropia.

Funding: This work was supported by National Natural Science Foundation of China (Grant No. 81770955), Project of Shanghai Science and Technology (Grant No. 17411950200), Joint research project of new frontier technology in municipal hospitals (SHDC12018103).

Reporting Checklist: The authors have completed the MDAR reporting checklist. Available at http://dx.doi.org/10.21037/atm-20-5698

Conflicts of Interest: All authors have completed the ICMJE uniform disclosure form (available at http://dx.doi.org/10.21037/atm-20-5698). The authors have no conflicts of interest to declare.

Ethical Statement: The authors are accountable for all aspects of the work in ensuring that questions related to the accuracy or integrity of any part of the work are appropriately investigated and resolved. This study was approved by the Ethics Committee of the Eye, Ear, Nose, and Throat (EENT) Hospital of Fudan University (No. 2016036) and was performed in accordance with the principles of the Declaration of Helsinki (as revised in 2013). Written informed consent was acquired from each patient.