Borderline ovarian tumors (BTs) represent between 10% to 20% of epithelial neoplasms of the ovary and are characterized by complex structures with mild cytological atypia and the absence of stromal infiltration (1). When BT occurs in young women, they have a good prognosis and the treatment is a surgery similar to that described for ovarian carcinoma; but fertility-sparing surgery can be offered without affecting oncologic outcomes (2). The diagnosis of this neoplasm is impossible prior to surgery, so it is necessary to diagnose it during surgery using an intraoperative consultation (IOC).

The IOC is a pathologic evaluation of the ovarian tumor during surgery; it consists of observing any combination of the macroscopic features of the specimen, cytological examination, and interpretation of frozen sections. In a Cochrane systematic review, the authors compared the IOC and final reports and found that when the IOC diagnosis is a BT, it is less accurate (inadequate sampling and interpretation error); for example, 21% of patients with IOC diagnoses of BT had a diagnosis of cancer in the final report (3).

Several studies have evaluated the accuracy of the IOC in BT diagnosis with varying results, with the sensitivity ranging between values of 30% to 61%, a specificity of 90% to 94%, and diagnostic accuracies between 69.5% and 76.8% (4-6).

Errors in the IOC diagnosis are typically due to the type of epithelium, inadequate sampling, technical problems in the preparation of slides, inappropriate interpretation, and the experience of the pathologist (7).

Because it is impossible to diagnose BT preoperatively using radiological imaging and/or tumor markers, the surgeon depends on real-time integration of these data, the age of the patient, and a reliable pathologist to reach a diagnosis during the IOC and determine the necessary extent of the surgery, so as not to over- or under-treat patients with pelvic tumors. For example, a false-negative diagnosis could cause that the patient will not be adequately staged, so the patient will probably require repeat surgery; on the contrary, a false positive in a young patient will cause a series of unnecessary surgical procedures that will compromise her reproductive and hormonal function.

In this study, we evaluated the diagnostic accuracy of the IOC in the diagnosis of BT at a high-volume center. We present the following article in accordance with the STROBE reporting checklist (available at http://dx.doi.org/10.21037/atm-20-3932).

A retrospective cohort study was carried out. All women >18 years with a diagnosis of pelvic tumor treated with surgery with IOC in ovarian tumors in our hospital consecutively from 2005 to 2015, were selected.

Patients for whom the following data were complete and available were included in the present study: clinical information, IOC report, final histopathological report, pre-surgery tumor marker profile, and preoperative images. The specific variables collected were age, radiological features of the tumor (size, presence of septa, the complexity of the lesion, and the presence of free fluid in the cavity), and CA125 level. Cases were categorized as benign, BT, or carcinoma.

Moreover, the proportion of discordant studies that led to the modification of the medical decision (over- and under-treatment) was measured. For statistical analysis, we used STATA software version 14 (StataCorp LLC., College Station, TX, USA). For all tests, a P value <0.05 was considered reflective of statistical significance.

The study was conducted in accordance with the Declaration of Helsinki (as revised in 2013) and was approved by our institutional ethics and research committee (Register Rev/0058/19). Being a retroSpective study, our research did not impoSe any risk for the patients and their management, and preServes their confidentiality; it was thus not necessary to obtain an informed conSent letter.

We reviewed 758 records of patients operated at our institution with a diagnosis of a pelvic tumor from 2005 to 2015. No cases with IOC were deferred. Tables 1,2 summarize the general characteristics of the patients. Despite the same percentage of BT being diagnosed in the IOC as in the final report, these were not the same cases, given the concordance rate of 64.8% (72/111). Of the discordant cases diagnosed as a BT in the IOC, 27% (30/111) were carcinomas, 6.3% were benign, and 1.8% were metastatic in the final histopathological report. With BT as the expected diagnosis, there was a 5.1% false-negative rate, meaning that they were misdiagnosed in the IOC (benign or carcinoma) and were reported as a BT in the final report. 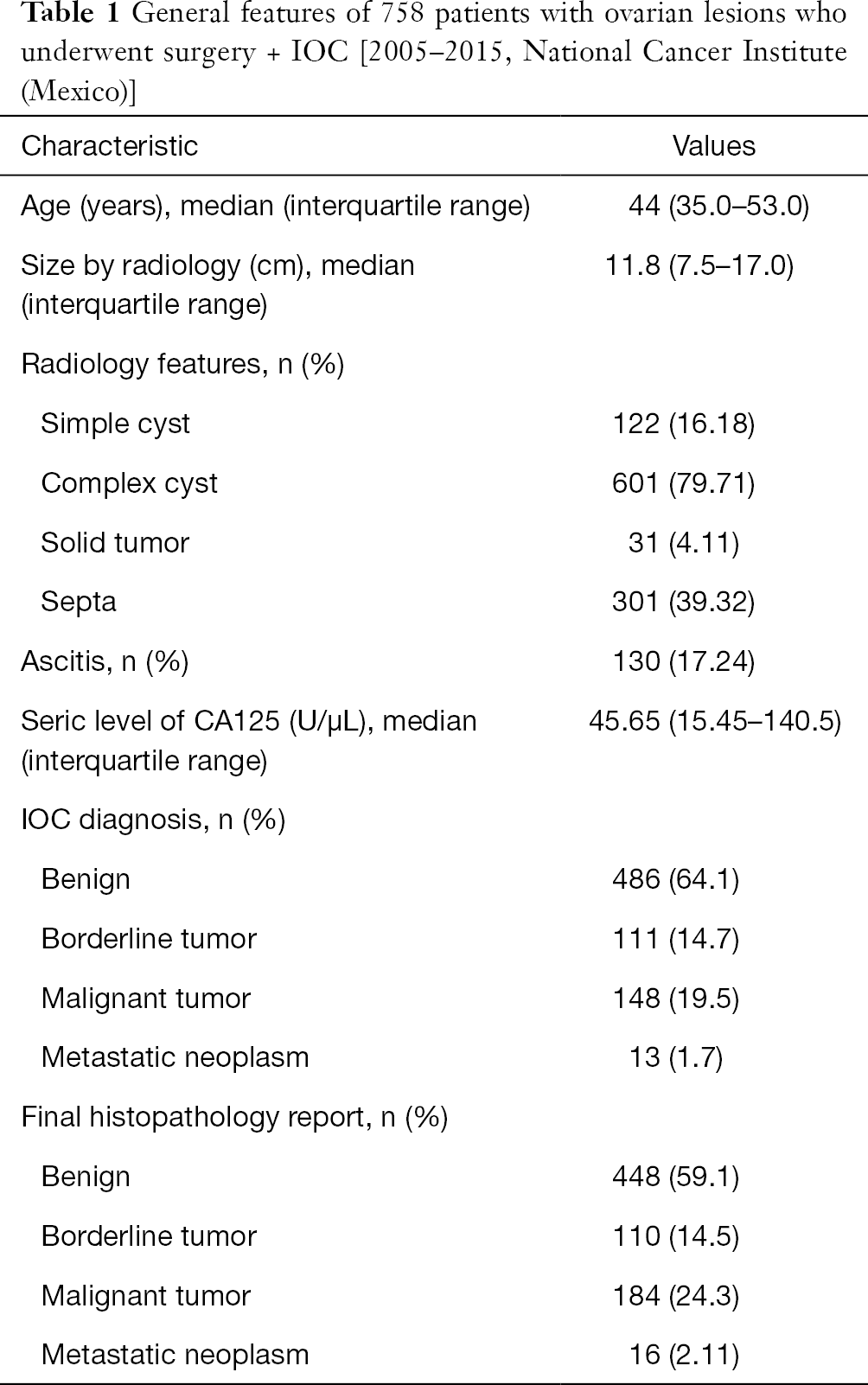 Analyzing the clinical characteristics of BT versus benign tumors and carcinomas revealed differences in tumor size and marker level (CA-125) between BT and the benign tumors (Tables 4,5). The diagnoses of false positives in the IOC were analyzed, and we found that metastatic mucinous adenocarcinoma and mucinous adenocarcinomas of the ovary were the main sources of this discordance (Table 6).

Misdiagnosis led to inadequate treatment for 1.1% of the patients. False-positive cases were those had a BT report in the IOC and underwent staging surgery, with the definitive diagnosis of benign tumors. There was sub-treatment or incomplete treatment in 5.1% of cases. In 27% of the patients with a false-positive diagnosis, the final report was carcinoma. Then, patients were adequately treated since the international guidelines recommended that patients with BT undergo the same staging surgery as patients with carcinoma.

In our series, 14.6% of pelvic tumors were diagnosed as a BT in the final histopathological report. The IOC diagnosis had high precision, close to 90%; however, 27% of the tumors diagnosed as BT during the IOC were carcinomas in the final report, which is much higher than that reported in a Cochrane review (21%). These results are likely associated with the medical team because a large proportion of the IOC cases are evaluated by pathologists in training and pathologists specializing in non-gynecological areas who have less experience with this type of neoplasms (3,8). In our statistical analysis, we found that the IOC is useful for the diagnosis of BT (LR+ 10.8); however, its utility increased when used to differentiate a BT from a benign one (LR+ 44.23). In contrast, its value decreased when diagnosing a BT by ruling out carcinoma (LR+ 5.05), because the morphological characteristics of BT and carcinomas are identical, and ruling out stromal invasion hinges on the sampling experience of the pathologist (1).

In our series, we observed that the most pronounced discrepancies between the IOC and the final report were in mucinous tumors (benign, carcinomas, or metastasic), which is consistent with the literature. There are reports that ovarian mucinous neoplasms decrease the sensitivity and specificity of the IOC due to tumor heterogeneity (9,10) However, there was also considerable disagreement in the diagnosis of low-grade serous tumors, because up to 20% of serous BT may contain foci or areas that obviously cannot be evaluated during the IOC due to size and limited sampling (11). The discrepancy between the diagnosis of serous tumors (i.e., serous BT and serous carcinoma) and endometrioid carcinoma (in particularly high-grade ones) can be explained because sometimes serous neoplasms display a glandular pattern and endometrioid carcinomas can show a papillary pattern, pseudopapillary growth, solid nests, and marked pleomorphism that require additional studies (e.g., immunohistochemical) to establish the difference (12).

Overtreatment and inadequate treatment were observed in 1.1% of the cases. Very few patients had a BT identified in the IOC that the later staging surgery revealed to be a benign or metastatic tumor for the final report; this percentage was tiny and, as such, we consider it acceptable. The sub-treatment of patients with false negatives accounted for 5.1% of all our cases, mainly because the IOC diagnosis was a benign tumor in 79.4% of cases or a metastatic tumor found upon definitive diagnosis to be a BT. The 27% for whom the final report included a carcinoma diagnosis were adequately treated since the international guidelines recommended that patients with BT undergo the same staging surgery as patients with carcinoma; however, this is unlikely to be a fertility-sparing surgery (13).

Diagnosing BT is crucial because this determines the immediate treatment course of patients and enables avoiding Sub- or overtreatment, and can offer fertility-preserving procedures to candidate patients without affecting their survival. Our population had few cases of fertility-sparing surgery. Potential explanations of this are that our patients are typically not young, the median age of the first pregnancy in our country is adolescent age and, before 2010, this option was very rarely offered in our service.

To date, findings from ultrasound or tomography (e.g., the presence of septa, vascularity, resistance, pulsatility index, and velocimetry) have been described, but not yet proven useful (14). Prediction models combining tumor markers, patient age, and ultrasonographic findings have been developed, but continue to fall short of success (15). In the present study, we found that tumor size (measured in the imaging study) varied between BTs and the benign tumors and carcinomas. BTs were more massive than carcinomas because of their slow and indolent growth. The carcinomas presented more frequently in the imaging analysis as complex or solid adnexal lesions. On the other hand, there was no difference in the age of presentation between BTs, carcinomas, and benign tumors, despite the fact that the median age of diagnosis for ovarian cancer is 61 years old (13). In the present series, the median age of patients with carcinomas was 49 years compared with BT’s median of 44 years. Our findings suggest that age and ultrasound findings are of little value in the diagnosis of this pathology.

This study has the limitations of being retrospective; however, the sample size was large, with complete data that allowed us to perform a comprehensive analysis. Another strength is that a second pathology review was included when necessary and obtained accurate results. This is the first study to extend this type of analysis to a specific population of Mexico. Working in a National Reference Center allow us to make recommendations for sample handling, and proposing training programs to pathologists specializing in pelvic neoplasms.

The IOC represents a challenge for any pathologist, and pelvic lesions are no exception. For the practitioners, knowing the accuracy and limitations of the IOC for BT will allow them to best select cases after talking to the patients to make a well-informed joint decision and consider those who will eventually provide a conservative or more radical treatment.

Reporting Checklist: The authors have completed the STROBE reporting checklist. Available at http://dx.doi.org/10.21037/atm-20-3932

Conflicts of Interest: All authors have completed the ICMJE uniform disclosure form (available at http://dx.doi.org/10.21037/atm-20-3932). The authors have no conflicts of interest to declare.

Ethical Statement: The authors are accountable for all aSpects of the work in ensuring that questions related to the accuracy or integrity of any part of the work are appropriately investigated and resolved. The study was conducted in accordance with the Declaration of Helsinki (as revised in 2013) and was approved by our institutional ethics and research committee (Register Rev/0058/19). Being a retroSpective study, our research did not impoSe any risk for the patients and their management, and preServes their confidentiality; it was thus not necessary to obtain an informed conSent letter.