Breast cancer is the most common malignant tumor in women and is the biggest threat to women’s health worldwide. Triple-negative breast cancer (TNBC), which is negative for estrogen (ER), progesterone (PR), and human epidermal growth factor receptor 2 (HER-2) expression, has attracted widespread attention in recent years (1,2). It typically exhibits the following characteristics: early-onset, more common in premenopausal women under 50 years old, earlier local recurrence and distant metastasis, visceral metastasis (as opposed to bone metastasis), insensitivity to endocrine and targeted therapies, and poor prognosis (3). The poor prognosis of TNBC is thought to be related to its invasive biological behavior and resistance to existing therapies (4). However, the exact pathogenesis of breast cancer is still unclear. In order to provide screening markers and novel therapeutic targets for the prevention and treatment of breast cancer, understanding its pathogenesis at the molecular level is critical (5).

Relevant studies have shown that TNBC with different molecular markers is closely related to the treatment of TNBC (6,7). At present, some molecular biomarkers related to TNBC have been reported. Studies have shown that in TNBC, a higher level of vascular endothelial growth factor is associated with a shorter survival (6,8). In addition, EGFR signaling cascades play an important role in cell proliferation, angiogenesis, metastasis and proliferation, and apoptosis inhibition. EGFR expression in TNBC patients is related to poor chemotherapy response and poor survival rate. Therefore, EGFR is a biomarker of TNBC (7,9,10). The level of Ki67 in TNBC was significantly increased, and its expression was directly related to tumor size and grade in TNBC patients. A higher level of Ki67 was also associated with an increased risk of death from TNBC (11-13).

Bioinformatics is an interdisciplinary field (14-16). Using cluster analysis, pathway analysis, and other methods, we are able to screen large-scale gene chip data, mine potentially significant molecules, and theoretically discuss disease pathogenesis. With the development of high throughput technology, the application of gene chip and gene sequencing has become a necessary and efficient method to study tumor diseases (17). Presently, in the era of data sharing, there are abundant genetic testing and analysis results in major databases; yet, accurate and effective data mining is lacking.

In this study, differential genes were screened from the data set downloaded from the Gene Expression Omnibus (GEO) database, and PLK1 was screened through a protein-protein interaction (PPI) network. PLK1 was found to play a key role in the incidence of TNBC. The importance of PLK1 was further verified by The Cancer Genome Atlas Program (TCGA) data set. Subsequently, the mechanism of PLK1 promotion of the malignant evolution of breast cancer was verified through cell and animal level experiments. This study provides a theoretical basis for exploring potential therapeutic targets for breast cancer.

We present the following article in accordance with the ARRIVE reporting checklist (available at http://dx.doi.org/10.21037/atm-20-6873).

The difference in gene expression was expressed as fold change (FC). The screening criteria utilized in this study were: P<0.05 and |logFC|≥1 (screening DEGs with expression difference of more than two times).

Breast cancer cell lines were purchased from American Type Culture Collection (ATCC, Manassas, VA, USA). All cells were incubated at a constant temperature of 37 °C and 5% carbon dioxide (CO2) under humid conditions. Cell growth was observed daily, and the culture medium was replaced as required. Cell lines were transfected with PLK1 small interfering ribonucleic acid (siRNA) (20 nM) and overexpressed plasmid. Lipofectamine 2000 (Life Technologies, Rockville, MA, USA) was used, and negative control siRNA (si-NC) and si-PLK1 were transferred into the cells for 6 h. The liquid was subsequently changed according to the manufacturer’s instructions. The transfected cells were used 48 h later.

The cells were inoculated into a 96-well plate, and were then transfected. Following continuous culture for 72 h, cell proliferation in each group was detected using the cell counting kit 8 (CCK-8) (Beyotime, Shanghai, China) by microplate reader (MultiskanEX, Lab systems, Helsinki, Finland) according to the manufacturer’s instructions (27).

The transwell migration assay test was carried out for 24-well plates. 5×104 cells/mL of treated cell suspensions in the logarithmic growth phase were added to the transwell chamber (Corning, USA). The transwell chamber was pre-mixed with Matrigel (Thermo Fisher Scientific, Waltham, MA, USA). Fetal bovine serum (FBS) medium (at a concentration of 500 µL) was added to the 24-well transwell chamber. After 24 h of culture, the transwell chamber was removed. A wet swab was rubbed off and no cells were inserted above the transwell chamber, thereby avoiding interference from cells that do not penetrate. The cells were then fixed with 4% paraformaldehyde (Sigma-Aldrich, St. Louis, MO, USA) for 10 min. Crystal violet staining solution was used for 15 min. It was then rinsed with phosphate buffered saline (PBS) and dried. Cells passing through the membrane were examined using an inverted microscope. Cells were counted and an average was calculated. Finally, a picture was taken (28).

The cells were spread in a 6-well plate with 3×105 cells/well. After the cell confluence reached 80%, a 10 µL suction head was used to draw a “horizontal line” in the orifice plate. The serum-free cell culture medium was then replaced. The scratch healing was observed and recorded at regular intervals, and the data were analyzed.

A single-cell suspension was prepared by digestion with 0.25% trypsin. The cells were suspended in Roswell Park Memorial Institute (RPMI) 1640 culture medium containing 10% FBS. A 1 mL cell suspension (cell density: 200/mL) was placed in a 6 cm culture dish, and the cells were incubated for 2–3 weeks. The culture was ceased when visible clones appeared in the petri dish. The supernatant was discarded and washed with phosphate buffer solution (PBS) three times. The cells were fixed with 4% paraformaldehyde (5 mL), and the fixed solution was discarded after 15 min. An appropriate amount of GIEMSA staining solution was added for 10–30 min. The dye was then washed slowly with running water and allowed to air dry. The petri dish was turned upside down and overlay with a sheet of transparent grid film. The number of clones larger than eight cells was counted under the microscope and the clone formation rate was subsequently calculated.

Rabbit anti-human PLK1 and Ki-67 monoclonal antibodies were purchased from Abcam, USA. The ready-to-use MaxVisionTM detection kit and amino benzidine color development kit were purchased from Fuzhou Maixin Biological and Biotechnology Co., LTD. The specimens were treated with 10% neutral formalin fixation, embedded in paraffin, cut into 4 µm thick continuous sections, and then subjected to immunohistochemical MaxVision two-step staining (the specific operational steps were performed according to the kit instructions). PBS replaced primary antibody as the negative control, and the gastric cancer tissues with known PLK1 positive were used as the positive control.

The tissue slices were initially incubated with deparaffin and protease K. After 2 min, they were washed with PBS three times. Next, they were incubated with terminal deoxynucleotidyl transferase (TdT) enzyme at 37 °C in the dark for 60 min, and subsequently washed in PBS three times. The slides were then incubated in horseradish peroxidase-labeled streptavidin followed by detection with stable chromagen 3,3'-diaminobenzidine (DAB). Finally, the slices were observed using a confocal laser scanning microscope (LSM880, Germany).

Screening of DEGs between TNBC and non-TNBC 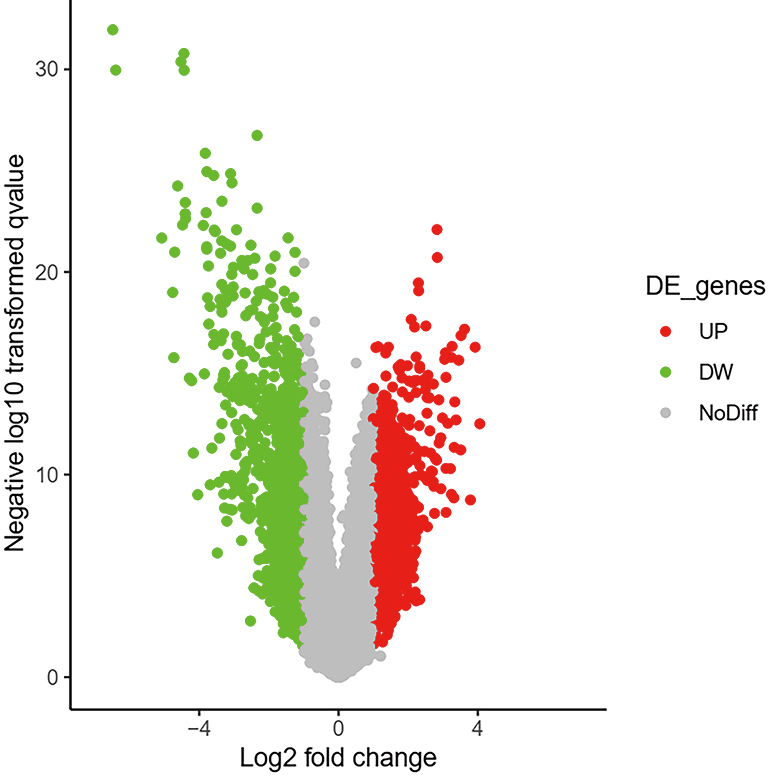 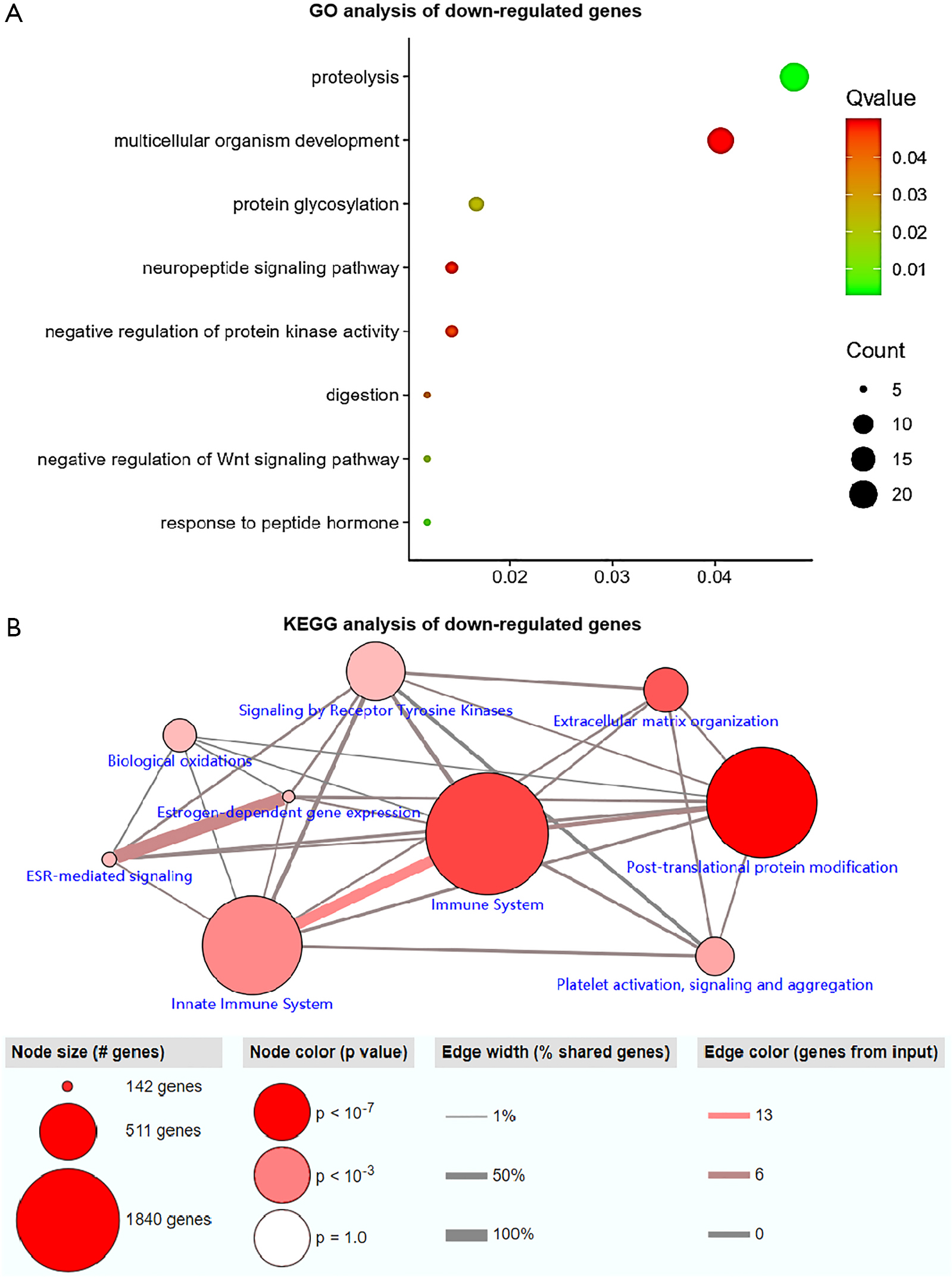 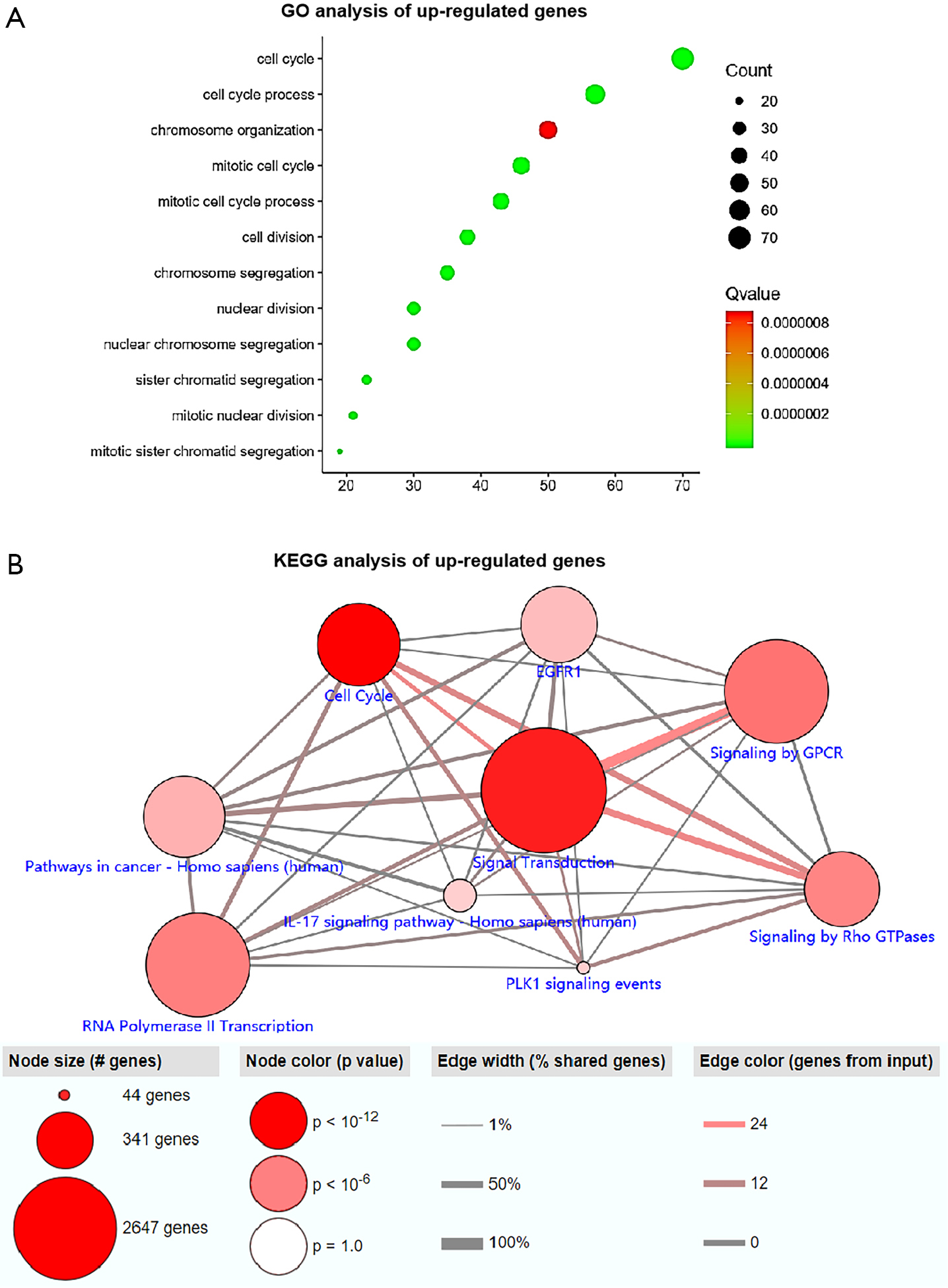 PPI network construction and screening and identification of Hub genes 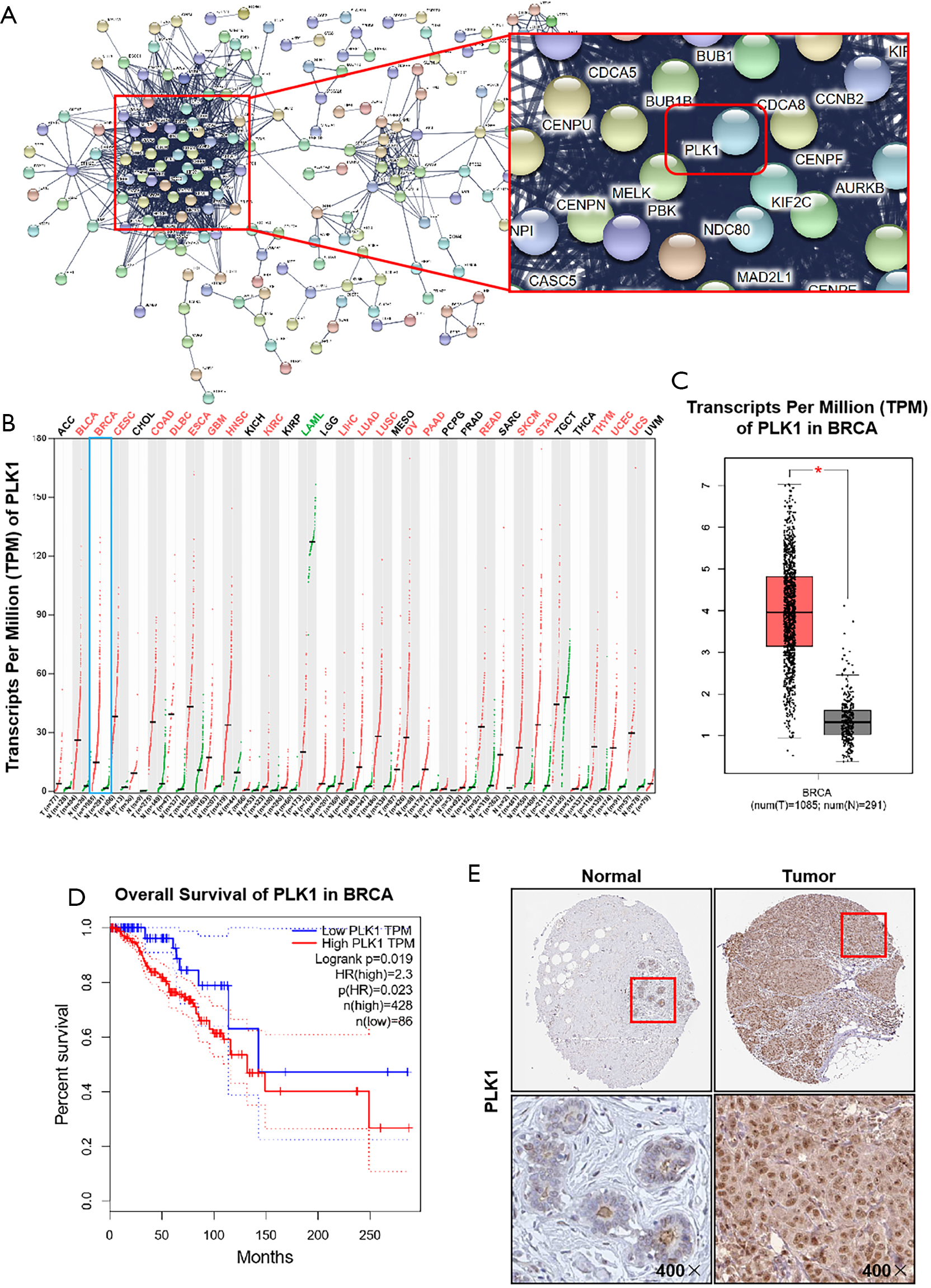 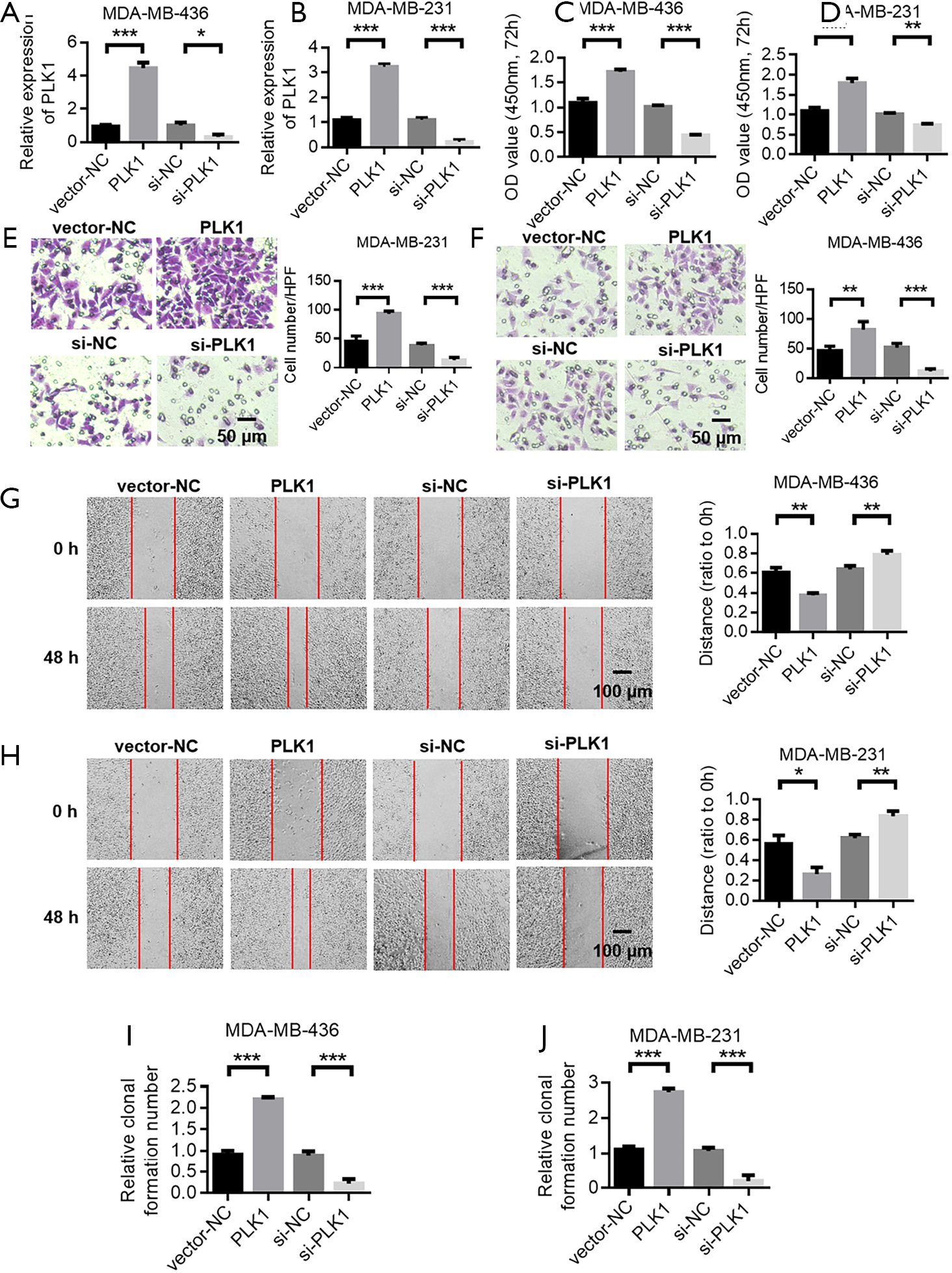 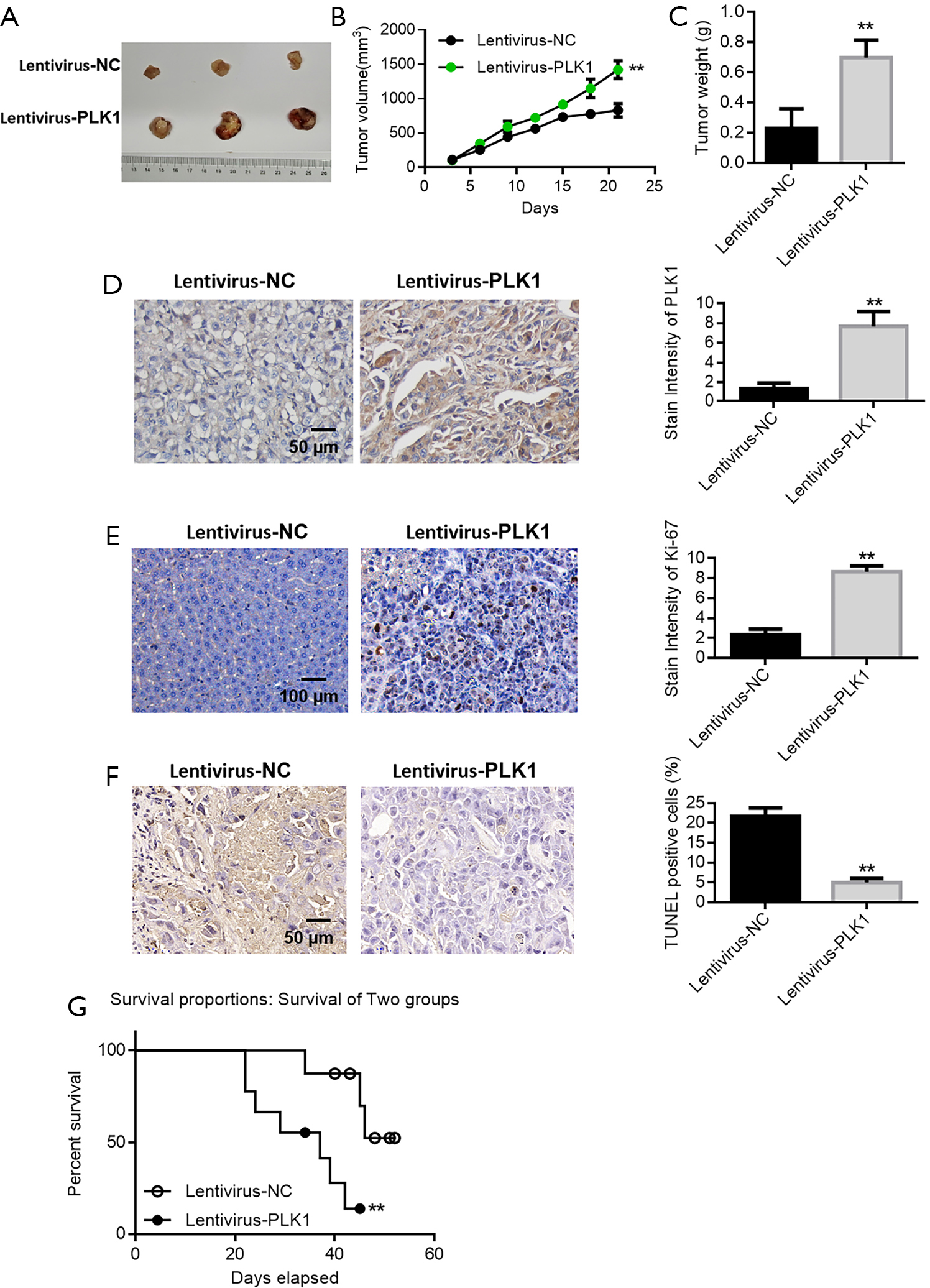 Breast cancer is a common malignancy with highly heterogeneous biological characteristics (29). Patients differ greatly in pathological manifestations, molecular biology, and treatment regimens (30). TNBC accounts for approximately 10–17% of all breast cancers (31). It is aggressive, has an earlier onset, earlier local recurrence and distant metastasis, and visceral metastases of the brain, liver, lung and other organs are more prevalent. It has a peak recurrence of between 1 and 3 years after treatment, and a high mortality rate within 5 years (32).

Tumor research is the most applied field of expression profile gene chip in disease research (15,33). The gene expression profile chip provides a powerful tool for analyzing gene differences between tumor and normal tissues and searching for novel tumor markers (34). It is critical to the screening of genetic markers for tumor classification and typing, and potential targets for drug therapy (16,28,35,36). In this study, the gene expression profile chip GSE62931 in the GEO database was used to screen out a total of 824 genes with significant differences in expression in non-TNBC and breast cancer tissues. In this study, GO and KEGG enrichment analysis was also performed on the screened DEGs. The results showed that these genes were primarily involved in the BP of cell and mitotic division; tumor growth depends in part on an increase in mitotic events. At the same time, these genes were also principally involved in the composition of the extracellular matrix, actin cytoskeleton and other cells, in addition to the binding of proteins and actin, as well as other MF. These are the basic biological conditions that regulate cell proliferation, migration, and invasion. However, the abnormality is the basic characteristic that leads to tumor formation. Through PPI analysis, it was found that the key Hub gene, namely the PLK1 gene, was closely related to tumorigenesis.

The results of this study showed that the positive expression rate of PLK1 in breast cancer was increased compared with that of the paracancerous control group. Meanwhile, the overexpression of PLK1 was found to promote the proliferation, invasion, and migration of breast cancer. In vitro animal experiments further confirmed that overexpression of PLK1 promoted tumor proliferation and inhibited tumor cell apoptosis. This suggests that PLK1 overexpression may be closely related to the incidence and development of breast cancer. The expression of PLK1 was observed to be related to the invasion and metastasis of breast cancer, suggesting that PLK1 may be an effective indicator and potential target for evaluating the prognosis of TNBC. Previous studies found that PLK1-targeted siRNA could effectively inhibit the proliferation of various malignant tumors, block tumor cells at the G2/M stage, and induce tumor cell apoptosis and sensitivity to radiotherapy and chemotherapy (40-42). Therefore, the development of PLK1 inhibitors as therapeutic targets may provide novel ideas regarding an individualized treatment for basal-cell type breast cancer (43-46).

There have been some reports on the cancer-promoting mechanism of PLK1. Studies on liver cancer and pancreatic cancer have found that the high expression of PLK1 mainly occurs in the early stage of tumor (47). In addition, PLK1 may be expressed as an inhibition of p53 activity by the G2 and S-phase-expressed 1 protein (GTSE1) and Topors, a ubiquitinized SUMOE3 ligase. PLK1 helps DNA-damaged cells escape the checkpoint block (48). Therefore, overexpression of PLK1 can directly promote cell proliferation, and on the other hand, can increase chromosomal instability and eventually lead to the occurrence of tumors by assisting the arrest of DNA-damaged cells to escape from the monitoring sites. Some downstream products and proteins of PLK1 action include FoxM1, Myc, Mdm2 and β-catenin (49-52). At the same time, PLK1 can also regulate some tumor suppressor factors such as P53, pRb, Brca2 and PTEN (53-55).

Reporting Checklist: The authors have completed the ARRIVE reporting checklist. Available at http://dx.doi.org/10.21037/atm-20-6873

Conflicts of Interest: All authors have completed the ICMJE uniform disclosure form (available at http://dx.doi.org/10.21037/atm-20-6873). The authors have no conflicts of interest to declare.

Ethical Statement: The authors are accountable for all aspects of the work in ensuring that questions related to the accuracy or integrity of any part of the work are appropriately investigated and resolved. All patients signed the informed consent. This study was approved by the ethics committee of Xinhua Hospital Affiliated to Medical College of Shanghai Jiao Tong University (No. XHEC-D-2020-179) and in line with Declaration of Helsinki (as revised in 2013).