Effects of Baihui electroacupuncture in a rat model of depression

Major depressive disorder (MDD) is associated with poor social function, low quality of life, increased economic burden, and a high risk of suicide (1). Acupuncture has been used in China for thousands of years as a widely recognized alternative therapy in clinical practice, and has been used to treat various neurological diseases including depressive disorders (2-5). Due to recent advances in technology, a new form of acupuncture, electroacupuncture (EA), is now being applied in clinical practice. It has proved that EA could be used in improving cognitive and emotional symptoms in patients with organic brain diseases like Alzheimer’s disease (6), anxiety disorders (7) and several physical diseases comorbid mood disorders including irritable bowel syndrome (8), hypertension (9) and stroke (10). Although exercise, electroconvulsive seizure therapy and transcranial magnetic stimulation are used to treat depression, psychopharmacological interventions are still the main stay of treatment options for most patients (11) by updating of evidence (12) and guideline (13,14). Evidence-based medicine involving in the efficacy and tolerance on treatments of depression remains largely empirical. Several first-line pharmacological treatments are available, they are not effective for a significant proportion of patients (15) and concomitant adverse reactions limit the use in clinical practices (16). Acupuncture can activate a patient’s own pain control system, stimulate blood flow, repair the physical damage of emotional distress, reduce pain, lift mood, and boost the immune system. If the combination of low-dose antidepressants plus EA could produce the same efficacy as solo antidepressants treatment with conventional dose, while reducing drug-related adverse reactions, this will be a relatively ideal treatment option. Evidences show that EA not only significantly improve depression symptoms and has fewer side effects than antidepressants (2) but when combined with a low dose of antidepressants mimic efficacy appear as compared to the same drug treatment with conventional dosage meanwhile showing lower incidences of adverse reactions and relapse (17). For these reasons, it has become a widely applied alternative therapy and is generating significant interest from Western countries (18). However, the antidepressant mechanism of EA is poorly understood, and evidence of its effectiveness remains weak (19). Further clinical and experimental studies are warranted to confirm the effectiveness of EA. Studies of animal models have indicated that EA exerts its neuroprotective effect against cerebral ischemia (20), hemorrhage (21), hypoxia, chronic stress (2), inflammation (22), and cognitive impairment (23) by upregulating the brain-derived neurotrophic factor (BDNF) expression in the hippocampus. Given that BDNF downregulation-induced hippocampal synaptic plasticity impairment plays an important role in the pathogenesis of MDD, the present study was undertaken to investigate the anti-depression-like effects of EA in rats exposed to chronic unpredictable mild stress (CUMS) and to explore the underlying mechanisms. Although different kinds of animal models of depression are used in laboratory experiments including surgical bilateral olfactory bulbectomy, maternal separation early life stress, learned helplessness, repeated restraint stress, social isolation, chronic social defeat stress, witness defeat, genetic and pharmacological intervene and CUMS (24), CUMS modal centers on the idea that low level chronic and unpredictable stressors, similar to what vulnerable individuals might experience in everyday life, could induce a wide range of behavioral deficits including decreased sucrose preference, motivation for reward stimuli and sexual behaviors along with increased aggression, anxiety-like behaviors and altered sleep patterns (25). The depression-like phenotype can be assessed with strong validity in deferent maze tests for cognition, open-field test for motivation and sucrose preference for anhedonia.

We present the following article in accordance with the ARRIVE reporting checklist (available at http://dx.doi.org/10.21037/atm-20-7459).

Immunohistochemistry was performed for the evaluation of BDNF or BrdU-positive cells. A SABC-kit (Wuhan Boster Biological Technology, China) was applied to the immunohistochemistry for BDNF evaluation. After deparaffinization and hydration, sagittal sections (5 µm) were blocked in 5% albumin from bovine serum for 20 min. After incubation with rabbit-anti-rat BDNF immunoglobin G (IgG) (1:200) (4 °C) overnight, sections were treated with biotinylated goat-anti-rabbit IgG and streptavidin-biotin peroxidase complex (SABC) for 2 h (37 °C), followed by visualization with 3,3’-diaminobenzidine. Counterstaining was done with hematoxylin. This was followed by dehydration in alcohol, transparency in xylene, and mounting with neutral resin. The hippocampal neurogenesis was evaluated on the coronal sections (5 µm). In brief, the sections were treated with 0.3% hydrogen peroxide in phosphate buffer saline (PBS) for 30 min and then with 10% normal goat serum in 0.05 M PBS for 30 min. After incubation with anti-BrdU monoclonal antibody (1:200) overnight at room temperature, sections were exposed to SABC for 2 h (37 °C). The sections were mounted in neutral resin after dehydration and then observed under an Olympus microscope. The BDNF+ cells and BrdU+ cells in the same region of the dentate gyrus were counted and analyzed with the FIVE software (Thermo Fisher Scientific).

Western blotting was performed as previously reported (30). Brain tissues were lysed in lysis buffer (0.05% Igepal, 50 mM Tris-HCl, 5 mM EDTA, 150 mM NaCl, 1% deoxycholic acid, 0.1% SDS, 1% Triton X-100). The lysates were then centrifuged at 10,000 rpm for 30 min at 4 °C, and the supernatants were harvested for the detection of protein concentration. Total proteins were separated on 12.5% SDS-polyacrylamide gels and then transferred onto a nitrocellulose membrane. Membranes were then blocked in PBS containing 0.1% Tween and 5% nonfat milk for 30 min. Thereafter, membranes were treated with either anti-Cx43 monoclonal antibody (1:1,000, Sigma) or anti-actin antibody (1:500, Sigma) overnight. After washing, membranes were incubated with SABC for 1 h, followed by visualization with enhanced chemiluminescence. The expression of BDNF and BrdU was quantified by measuring the optical density (OD) at 260 nm.

All statistical analyses were carried out with SPSS software version 15.0 (IBM SPSS Software), and all data are expressed as mean ± standard deviation (SD). One-way analysis of variance (ANOVA) was used for between-group comparisons. A P value <0.05 was considered statistically significant. 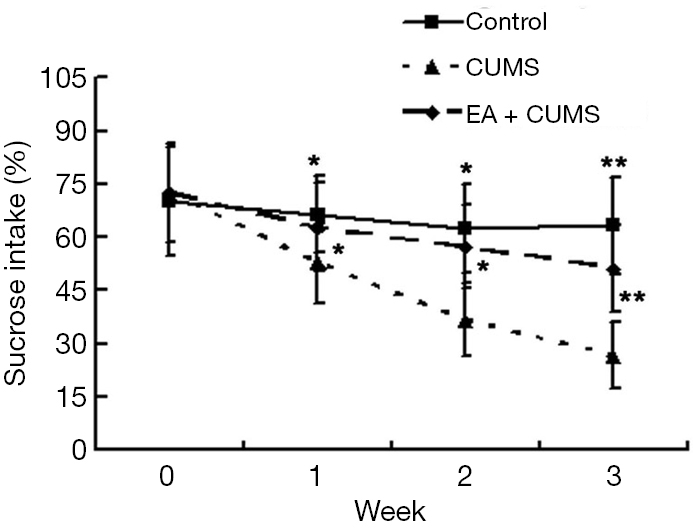 Change of BDNF-positive cells in DG 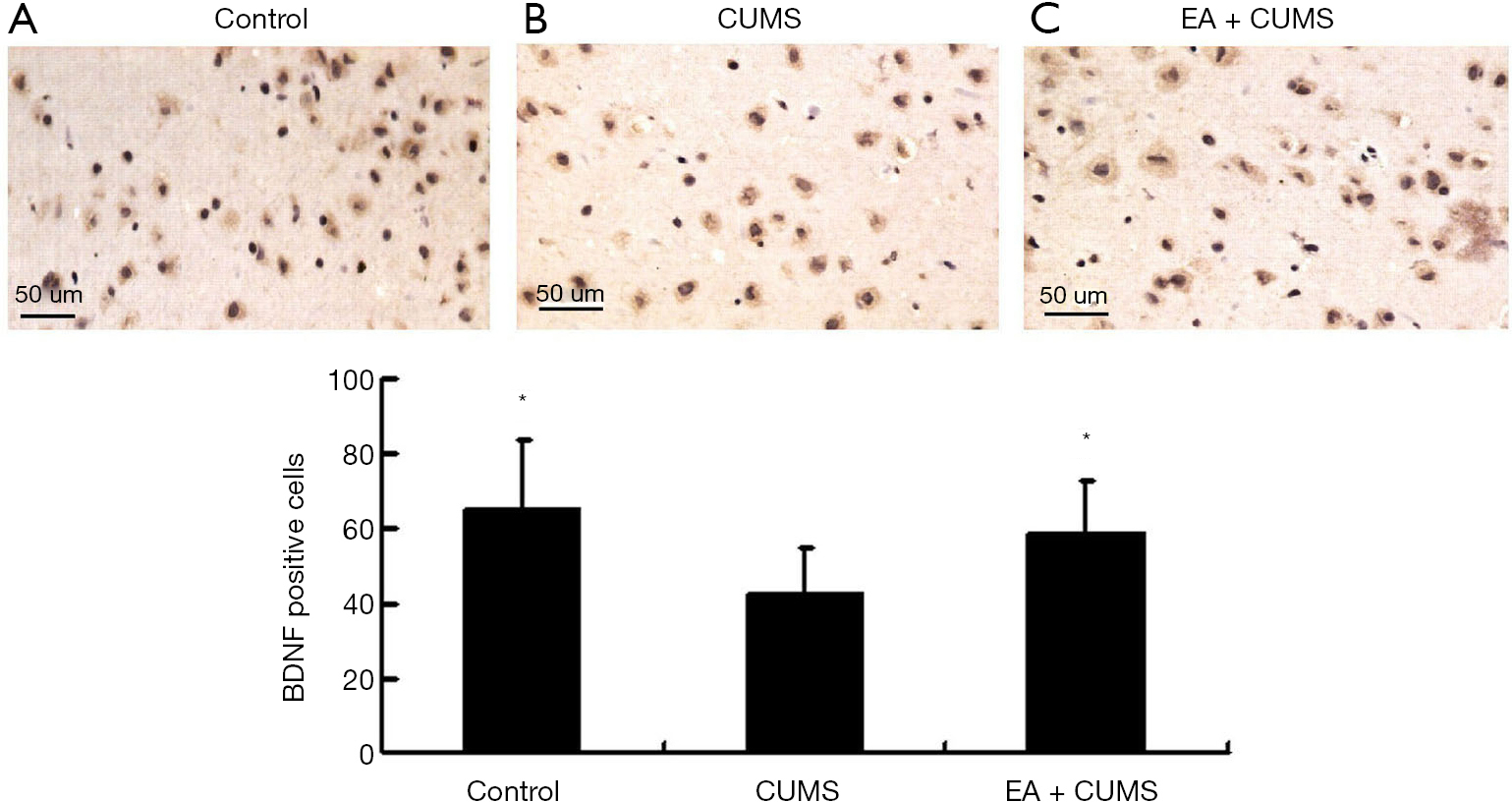 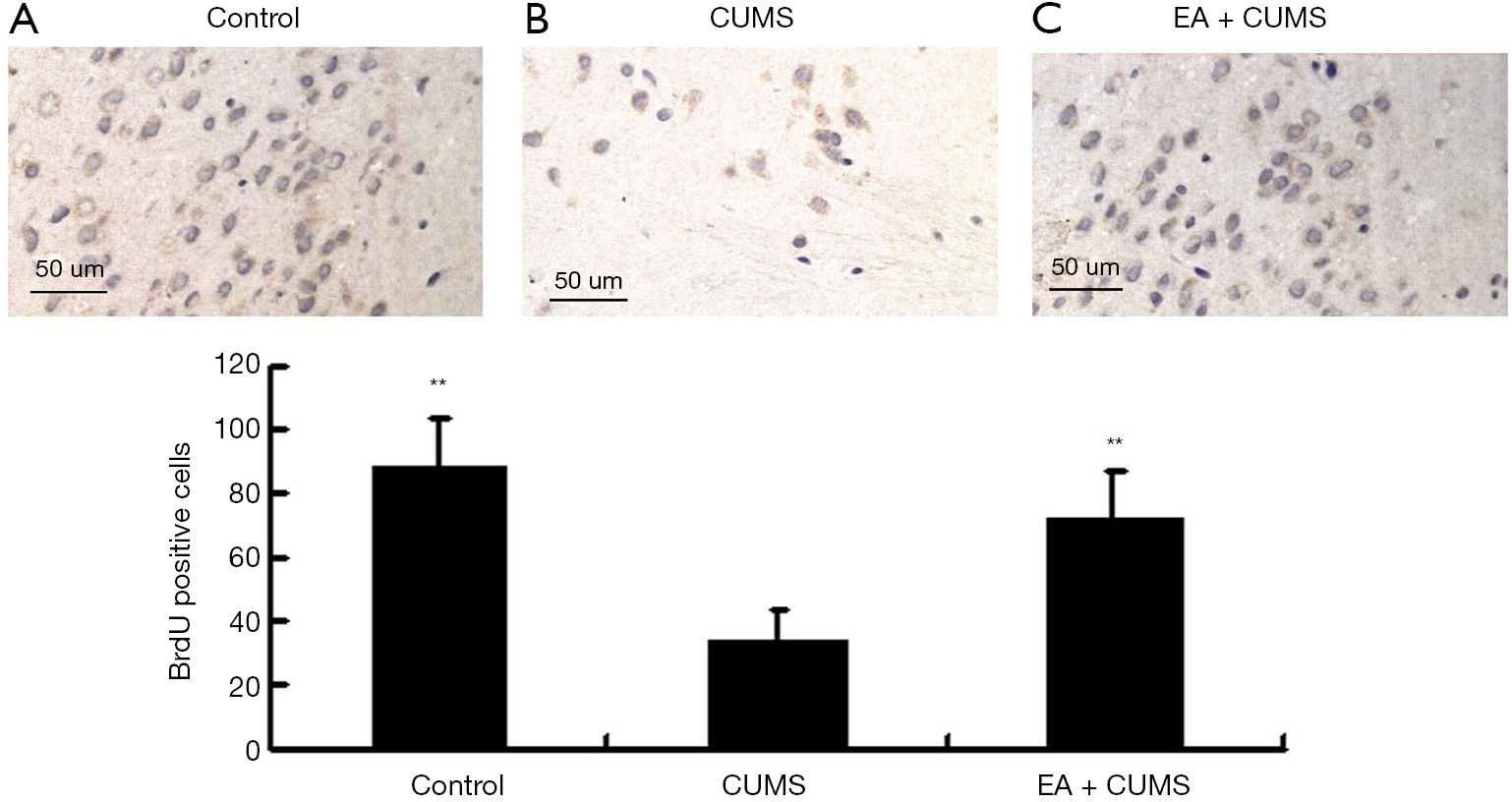 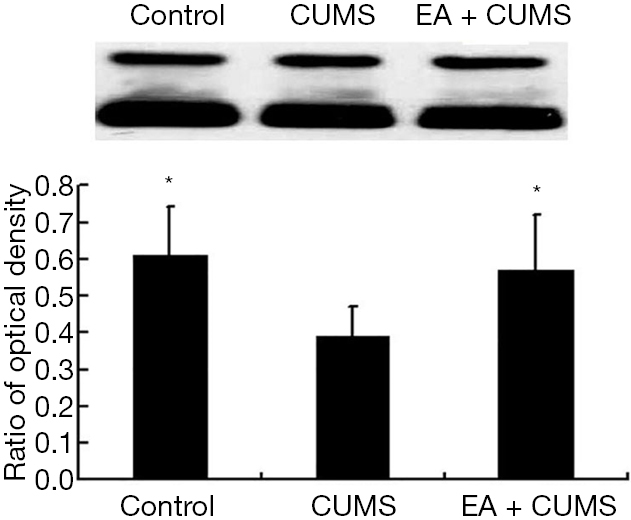 The neuroprotective effect of EA at GV 20 in MDD rats may possibly be related to the improvement of neural circuitry in the case of mood disorders (39). Functional and structural brain imaging has revealed that the cortex-hippocampal loop is associated with higher-order emotional and cognitive functioning (40), and stimulation at any acupoint including GV 20 in this loop may lead to the improvement of mood-related cerebral dysfunction. Furthermore, hippocampal neurogenesis is involved in the plasticity of hippocampal inner circuits. Neural progenitors in the DG originate from the subgranular layer. After proliferation, maturation, and migration to the CA3 area, the newly generated cells become mature and form a network with pyramidal neurons to integrate information into the cortex-hippocampal loop. In the growth and differentiation stage of neural stem cells, BrdU, an analogue of TTP that can be incorporated into DNA during the synthesis of DNA, has become a marker for newly generated cells, and the expression of BrdU therefore reflects the neurogenesis in local neural networks. A variety of factors are involved in the regulation of hippocampal neurogenesis including neurotransmitters, hormones, growth factors, and external environmental factors such as stress, social isolation, substance abuse, and physical exercise. A recent study reported that EA treatment after ischemic stroke may improve the post-stroke functional recovery by enhancing the proliferation and differentiation of neuronal stem cells via the BDNF signaling pathway (37).

CUMS reduces BDNF protein expression mainly via the dysfunctional hypothalamic-pituitary-adrenal (HPA) axis and the immune system (41). It is therefore possible that an increase in BDNF expression may exert a direct antioxidative effect (42) or indirectly improve the homeostasis of the neuroendocrine system (43) by inhibiting the hyperactivity of the HPA axis (44), decreasing the mRNA expression of adrenocorticotropic hormone (ACTH), a corticotropin-releasing hormone, in the hypothalamus and cortisol in the plasma, in order to control the immune response to tissue injury (45) and enhance the hippocampal serotonin system (46) which protects the brain against damage. This may partially explain why low-frequency EA is able to enhance mood and emotion, but further investigation is necessary to detail the exact mechanisms involved in EA and mood disorders.

Our study has several limitations. First, it must be cautious when the research conclusion is extended to human being duo to certain racial differences and limitations of animal model in rats. Second, the exact sites of current diffusion involving in emotional control regions in brain and the activation level of cell currents are not precisely studied. Finally, we only selected Baihui acupoint for treatment and this fact is not consistent with the real situations that based on the theory of meridians several acupuncture sites are always simultaneously used to treat patients to achieve wider stimulus fields and bigger efficacy. A further research will be performed to overcome these shortcomings in the future.

In conclusion, our study shows that administration of EA at the Baihui acupoint may improve the symptoms of MDD through increasing BDNF expression in the brain to restore hippocampal neurogenesis.

Reporting Checklist: The authors have completed the ARRIVE reporting checklist. Available at http://dx.doi.org/10.21037/atm-20-7459

Conflicts of Interest: All authors have completed the ICMJE uniform disclosure form (available at http://dx.doi.org/10.21037/atm-20-7459). The authors have no conflicts of interest to declare.

Ethical Statement: The authors are accountable for all aspects of the work in ensuring that questions related to the accuracy or integrity of any part of the work are appropriately investigated and resolved. Experiments were performed under two projects the Traditional Chinese Drug Administration Bureau of Zhejiang Province (license No. 2017ZA083) and the Major Science and Technology Project in Medical and Health of Zhejiang Province (co-constructed Project by the Province and the Ministry, license No. WKJ-ZJ-1922) and granted by Animal Ethics Committee of Zhejiang University of Chinese Medicine (license No. 2016-327), in compliance with the guidelines of Zhejiang University for the care and use of animals.