Diabetic nephropathy is a major cause of end-stage renal disease, and nearly 50% of type 2 diabetes mellitus (T2DM) patients eventually progress to chronic kidney disease (CKD) (1). So far, chronic hypoxia has been considered a standard feature of various progressive kidney diseases, including diabetic nephropathy (2). Hyperglycemia and hyper-filtration of the kidney can cause hypoxia, but the underlying mechanisms are not apparent. The high oxygen demand of the kidney is mainly related to the oxygen consumption of renal tubular reabsorption (3). It is vital to monitor renal blood oxygen levels noninvasively because it can help understand the kidney oxygenation status and fibrosis process in diabetic nephropathy and to monitor the efficacy of new drugs for diabetic nephropathy. For example, the two drugs recently incorporated into clinical practice, a sodium-glucose cotransporter 2 inhibitors and glucagon-like peptide 1 receptor agonists, can reduce blood glucose, blood pressure, proteinuria, and glomerular filtration rate in T2DM patients, especially in patients with moderate-to-severe diabetic nephropathy (4). Imaging can supply histological blood oxygen level indicators to track drug efficacy precisely.

Susceptibility-weighted imaging (SWI) is an imaging technique that uses the inherent properties of a local magnetic field and enhances image contrast by weighing the phase mask through the amplitude map, which ultimately improves the visibility of various susceptibility sources (5). SWI can reflect tissue blood oxygen levels, and in recent years, it has been increasingly applied in evaluating renal impairment. SWI can monitor the changes of medullary blood oxygen levels after water loading (6) and provide a quantitative evaluation of renal fibrosis in unilateral ureteral obstruction (7). Abnormal lesions with low SWI signals can be observed in patients with delayed graft function after kidney transplantation (8).

Texture analysis quantifies the variability of lesions by analyzing the values and correlations of image pixels. It is beneficial for determining the association between images and pathological processes (9). Texture analysis can quantify tissue heterogeneity and is considered a new biomarker for predicting the decline of renal function in polycystic kidney disease (10). Also, studies have shown that some functional imaging-based texture features can test renal dysfunction (11).

Therefore, the primary aim of this study was to examine the SWI parameters and SWI-based texture features of kidneys in patients with T2DM.

We present the following article in accordance with the STARD reporting checklist (available at http://dx.doi.org/10.21037/atm-20-7121).

All procedures performed in this study involving human participants were in accordance with the Declaration of Helsinki (as revised in 2013). The study was approved by the ethics board of the third affiliated hospital of Soochow University (No. 2016-010) and informed consent was taken from all the patients.

From March 2013 to September 2017, a total of 54 consecutive patients diagnosed with T2DM who scheduled for SWI scan from the department of nephrology of the third affiliated hospital of Soochow University were included in the retrospective study. T2DM met the American diabetes association criteria (12).

Ultimately, sample size was determined. Forty-five patients with T2DM who underwent SWI scan were included in this retrospective and single-center study, and the detailed flow chart is shown in Figure 1.Blood urea nitrogen (BUN) and serum creatinine (Scr) were tested within one week before MRI. The estimated glomerular filtration rate (eGFR) was calculated by modification of diet in renal disease (MDRD) formula: 175 × creatinine (mg/dL) − 1.154 × age (year) − 0.203 × 0.742 (if female) (13). If eGFR was greater than 120 mL·min−1·1.73 m−2, it was recorded as 120 mL·min−1·1.73 m−2. With the eGFR level of CKD categories (14), the patients were divided into non-moderate-severe renal injured group (non-msRI, eGFR >60 mL/min/1.73 m2) and moderate-severe renal injured group (msRI, eGFR ≤60 mL/min/1.73 m2). 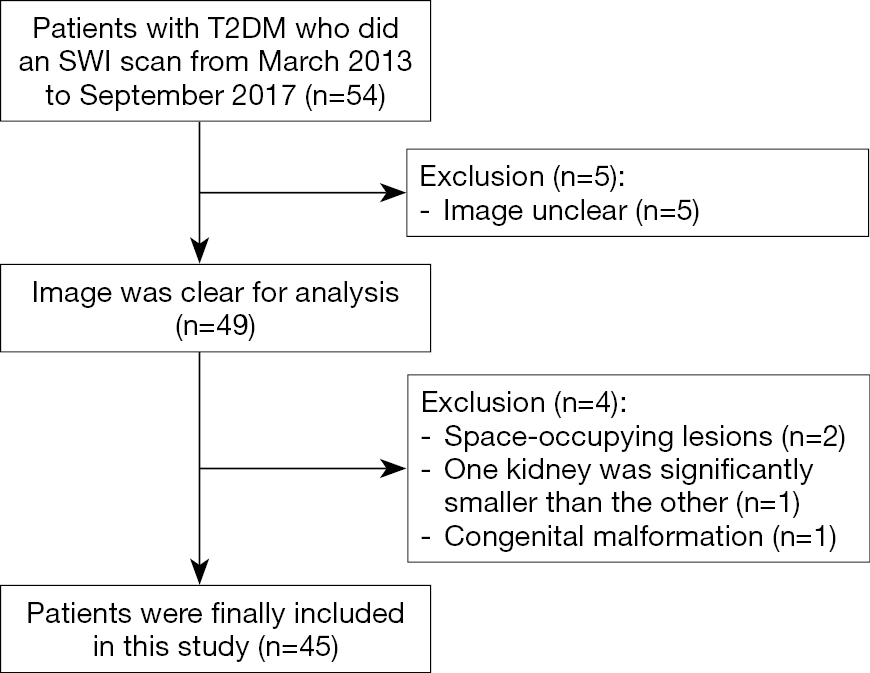 Figure 1 Flowchart of patient selection in this study.

All subjects fasted for 4 hours before magnetic resonance imaging (MRI), and none of them took angiotensin-converting enzyme inhibitor or angiotensin receptor blockers before the examination. All scans were performed using a Siemens 3.0 T magnetic resonance scanner (Magnetom Verio; Siemens Healthineers) with a 16-channel phased-array coil. Coronal T2-weighted imaging (T2WI) was conducted first to determine the anatomical localization, followed by cross-sectional SWI scanning. The MRI scanning sequence and parameters are shown in Table 1. Magnitude image, and phase image were retrieved from SWI sequences. For the phase image, the mask was acquired after high-throughput filtering and then weighed with a magnitude image to generate an SWI fusion image (fSWI).

The statistical results were with the data obtained from reviewer 1 (YW). To assess the consistency between reviewers, the data from 20 patients were randomized and analyzed again by another imaging physician without knowing the results (reviewer 2: JD). Both reviewers with more than 10 years of experience in abdominal MR imaging were blinded to the final diagnosis. There were no missing data and no adverse event.

The Kolmogorov-Smirnov test tested the normal distribution of measurement data. The parametric data were expressed as , and the median and interquartile range expressed non-parametric data. This frequency expresses the count data. 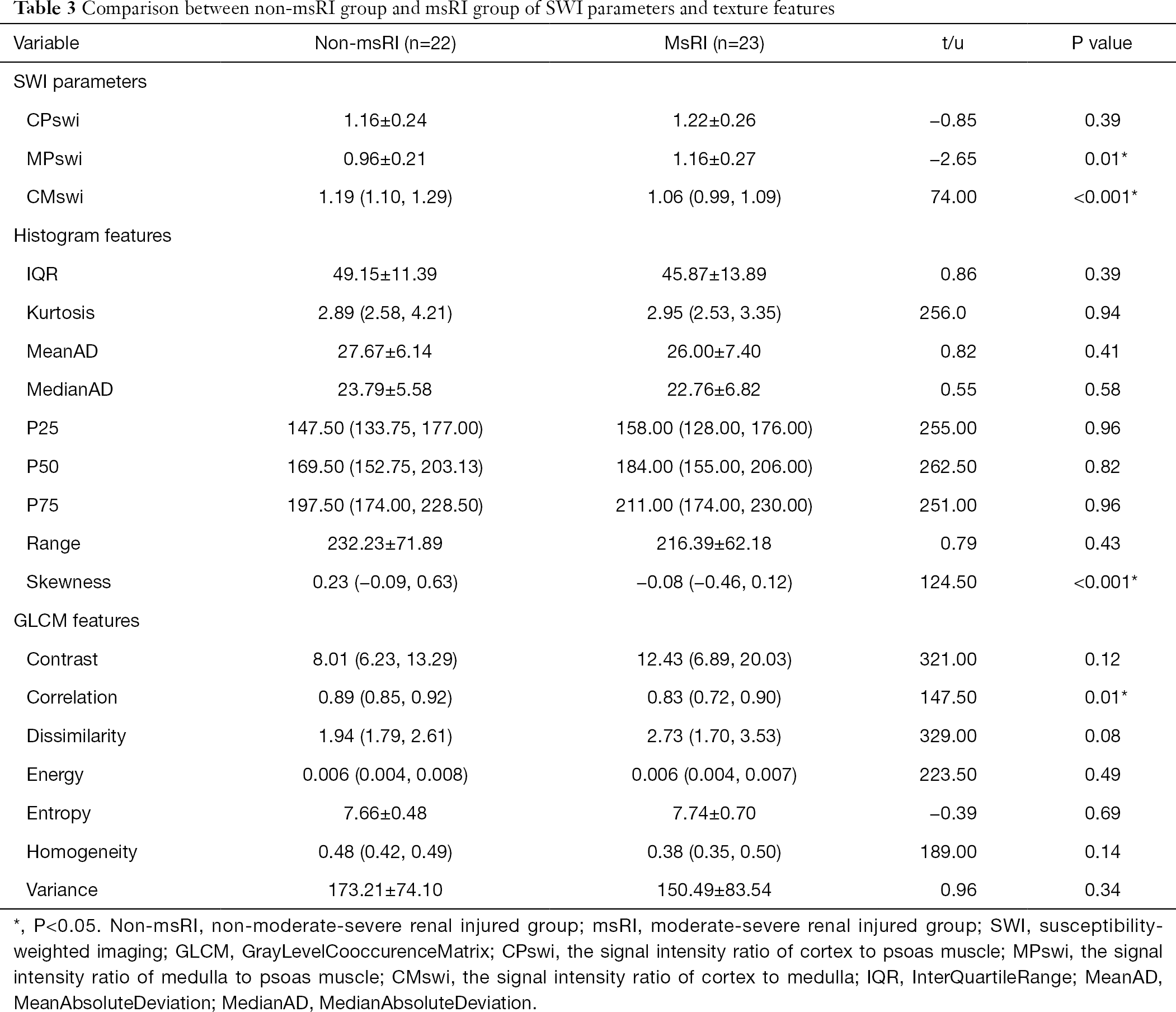 Differentiation between non-msRI and msRI group 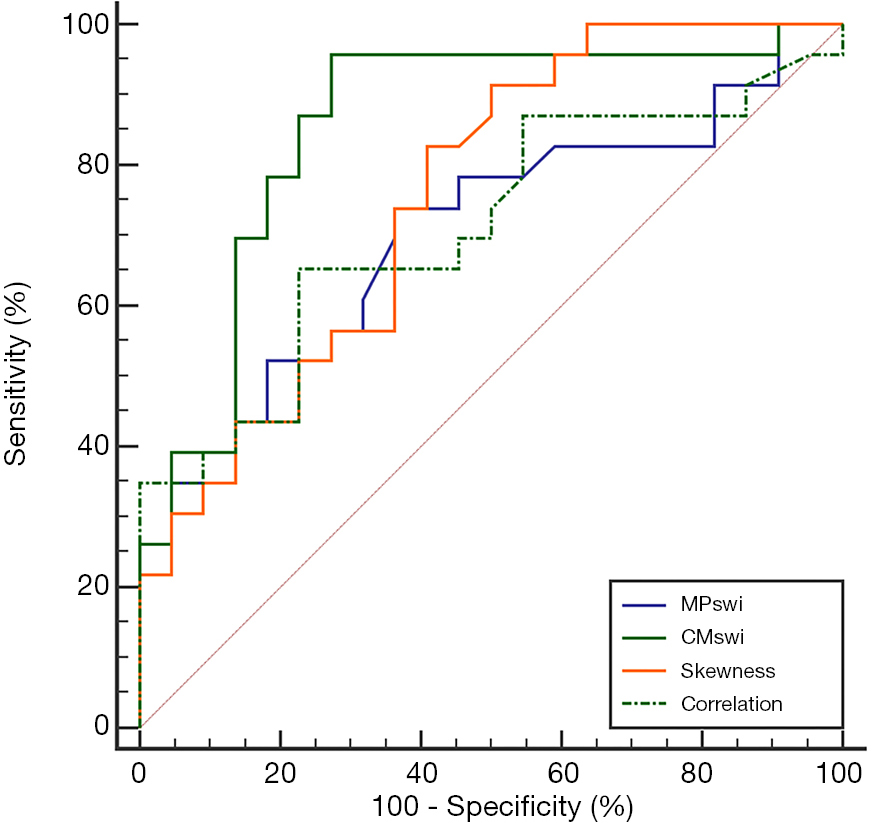 The protection factors of the msRI group

Chronic hypoxic injury is considered a common pathway for end-stage renal disease (3). SWI can reflect the tissue blood oxygen level and supply an oxygen metabolism index for understanding the mechanism of renal injury and monitoring drug efficacy. Thus, in this study, we examined the SWI parameters and SWI-based texture features of kidneys in patients with T2DM, to verify its performance in evaluating renal dysfunction.

We found MPswi was significantly lower than CPswi in both non-msRI and msRI groups. We hypothesized that this signal change came from the increased deoxyhemoglobin level in the medulla so that its blood oxygen level was lower than the cortex. This result is consistent with most previous studies on blood oxygen level-dependent MRI (BOLD-MRI) in humans and animals (20-23). Because of the oxygen consumption from renal tubular mediated Na ion reabsorption (3), and the oxygen shunting from medullary arterial-venous counter-flow (24), the kidney medulla shows physiological hypoxia, which is necessary for the development of kidney injury (25,26). In diabetic patients, the glomerular hyperfiltration increases oxygen delivery, and the sodium-glucose cotransporter mediates the increase of sodium and glucose reabsorption in the renal tubular, which further enhances oxygen consumption (2,27). This positive feedback circle leads to increased oxygen demand. However, hyperglycemia attenuates the hypoxia-inducible factor-1α (HIF-1α) mediated response to hypoxia, and indirectly changes the hemodynamic or/and metabolism in diabetic kidneys (2). Both hyperfiltration and hyperglycemia can lead to hypoxia in diabetic kidneys and decrease blood oxygen levels.

MRI texture analysis can ease the analysis and evaluation of renal function. All images comprise pixels, which are grayscale units within the defined range, representing the points in space (9). We performed the first and second-order statistical analyses on fSWI images. The first-order analysis used a histogram to analyze the intensity of each pixel, and the second-order analysis used a gray level co-occurrence matrix (GLCM) to analyze the inter-relationship or co-occurrence between pixel intensities. We found the Skewness and Correlation were significantly lower in the msRI group compared to the non-msRI group. Skewness is a measurement for histogram asymmetry, and zero represents the normal distribution (36). Correlation is a measurement for the probability of specified pixel pairs occurring together (36). We speculated that the decreased deoxyhemoglobin content might cause these changes with increased SWI signal intensity in the medulla of the msRI group so that the heterogeneity between cortical and medullary pixels was lower than the non-msRI group. A recent study (11) reported the texture features with DWI, BOLD, and SWI could test renal dysfunction, and EntropyBOLD and CorrelationSWI can help assess early renal dysfunction. Also, a discriminant equation with GLCM parameters of BOLD-MRI can predict the renal pathology of lupus nephritis (37). Texture features are an important prognostic biomarker for the progression of renal degeneration in autosomal dominant polycystic kidney disease (10). In these studies, texture analysis shows higher diagnostic and predictive value.

This study also has some limitations. First, the sample size is small, and there might be a sampling bias. Second, only the right kidney was measured. Although most previous studies found no significant differences in blood oxygen levels in both kidneys (38-40), and the gastrointestinal air affects left kidney image, single kidney analysis may still cause measurement bias. Third, we adopted the most widely used ROI measurement method. Some alternative methods have been used for renal function analysis, including compartmental approach, fractional hypoxia method, concentric object method, and twelve-layer concentric object method, but there is no consensus on which method is better (41). Fourth, many challenges still exist for applying texture analysis to clinical and research applications. Some unrelated lesion factors can independently affect the results of texture analysis, for example, the slice thickness, voxels, gray levels, noise, and resolution of the images (9).

In conclusion, from the SWI imaging, we found MPswi is higher, and CMswi, Skewness, Correlation are lower in the moderate-severe renal injured group. Although this study found that SWI parameters could reflect changes in medullary oxygenation levels, the mechanism of increased medullary SWI signals corresponding to high oxygenation levels is yet to be explored by animal experiments. Texture analysis provided us with more information about the heterogeneity of cortical and medulla signals that could not be observed with naked eyes, opening a new window for studying renal impairment.

Reporting Checklist: The authors have completed the STARD reporting checklist. Available at http://dx.doi.org/10.21037/atm-20-7121

Conflicts of Interest: All authors have completed the ICMJE uniform disclosure form (available at http://dx.doi.org/10.21037/atm-20-7121). The authors have no conflicts of interest to declare.

Ethical Statement: The authors are accountable for all aspects of the work in ensuring that questions related to the accuracy or integrity of any part of the work are appropriately investigated and resolved. All procedures performed in this study involving human participants were in accordance with the Declaration of Helsinki (as revised in 2013). The study was approved by the ethics board of the third affiliated hospital of Soochow University (No. 2016-010) and informed consent was taken from all the patients.