Early in the 1980s, the thyroid H2O2 generator was found in the apical plasma membrane of pig open follicles (1). In 1999, Leseney et al. found biochemical characterization of a Ca2+/NAD(P)H-dependent H2O2 generator in human thyroid tissue (2). The dual oxidase 2 (DUOX2) gene was firstly purified in 1999 and located on chromosome 15q21.1, consisting of 34 exons (3). In 2007, the mouse DUOX2 mutation was reported to have occurred spontaneously at the Jackson Laboratory and was named “thyroid dyshormonogenesis” to signify the characteristic defect of thyroid hormone synthesis (4). This is currently the only known gene that causes transient congenital hypothyroidism (CH), but its mechanism has not yet been clarified. The protein encoded by this gene is a glycoprotein and a member of the nicotinamide adenine dinucleotide phosphate (NADPH) oxidase family. The synthesis of thyroid hormone is catalyzed by a protein complex located at the apical membrane of thyroid follicular cells. This complex contains an iodide transporter, thyroperoxidase, and a peroxide generating system that includes this encoded protein and dual oxidase 1 (DUOX1) (5).

In 2002, Moreno et al. found the inactivated mutation of DUOX2 gene in 9 CH patients (1 permanent and 8 transient) (6). After that, additional cases were reported with DUOX2 gene mutations (7), and they found that a missense mutation (p.R1110Q) may cause thyroid goiter. In China, Liu et al. found 2 novel missense mutations (p.R354W and p.A1206T) impaired H2O2 production and caused CH and goiter (8).

However, none of the above studies have clarified the pathogenesis of transient hypothyroidism, and the potential mechanism may not be discovered. Long-term outcome data are insufficient to determine further outcomes of transient CH. Therefore, we have endeavored to spend years following up these patients and intend to explore the association between the DUOX2 genotype and phenotype in the treatment of patients with DUOX2 mutation hypothyroidism. We present the following article in accordance with the MDAR checklist (available at http://dx.doi.org/10.21037/atm-20-7165).

A total of 61 patients who presented with low thyroxine (T4) and free thyroxine (FT4) levels, and thyroid stimulating hormone (TSH) levels >10 mIU/mL detected by the national neonatal newborn screening program were recruited (9). Whole-exome sequencing was performed and 20 patients (7 males, 13 females) among them were found to harbor biallelic DUOX2 mutations. All patients were double checked in our hospital and thereafter treated with L-thyroxine (L-T4) at an initial dosage of 10–15 µg/kg per day (9). The L-T4 dosages were titrated at the suggested serum level of TSH <3 mIU/mL (9). Transient CH (TCH) or permanent CH (PCH) classification of the patients was dependent on the need of L-T4 in maintaining euthyroidism. After withdrawal of therapy, serum TSH, fT3, and fT4 of all patients were followed once or twice a year until the present.

This study was approved by the ethics committee of Children’s Hospital of Fudan University (No. 2015-183). All participants consented to this research, as provided by their parents or guardians. The samples were collected according to the World Medical Association Declaration of Helsinki (as revised in 2013).

An average of 10 Gb raw data (Fastq) as input was generated for each sample by Illumina sequencers. Firstly, the paired-end reads were performed for quality control using FastQC version 0.11.5 (http://www.bioinformatics.babraham.ac.uk/projects/fastqc). Secondly, Burrows-Wheeler Aligner (BWA) version 0.7.15 (10) was used to align sequencing reads to the reference genome GRCh38. Sequence alignment/map (SAM) format files were generated by BWA. Thirdly, the SAM format files were further processed to binary SAM (BAM) files using Samtools version 1.3.1 (11), then duplicates were removed using Picard version 2.5 (12). After these processes, variant calling was performed by GATK version 3.5 (13), and the Vcf file was generated. Finally, we used Annovar software to annotate the variants from the Variant Call Format (VCF) file and integrate information from multiple databases. The final variants could feed to the downstream advanced analysis pipeline.

Initially, we focused on variants in 30 candidate genes which have been implicated in CH or thyroid dysgenesis. This core gene list was determined by databases such as Online Mendelian Inheritance in Man (OMIM) and GeneReviews, as well as published literature, and is supplied in Table 1. Variants were analyzed following the basic criteria from American College of Medical Genetics (ACMG) guideline (14). Confirmation of variants identified by WES was carried out using standard Sanger sequencing using polymerase chain reaction. Polyphen-2 (http://genetics.bwh.harvard.edu/pph2/) and mutation taster (http://asia.ensembl.org/index.html) tools were used for all novel variants to predict whether they were pathogenic mutations. 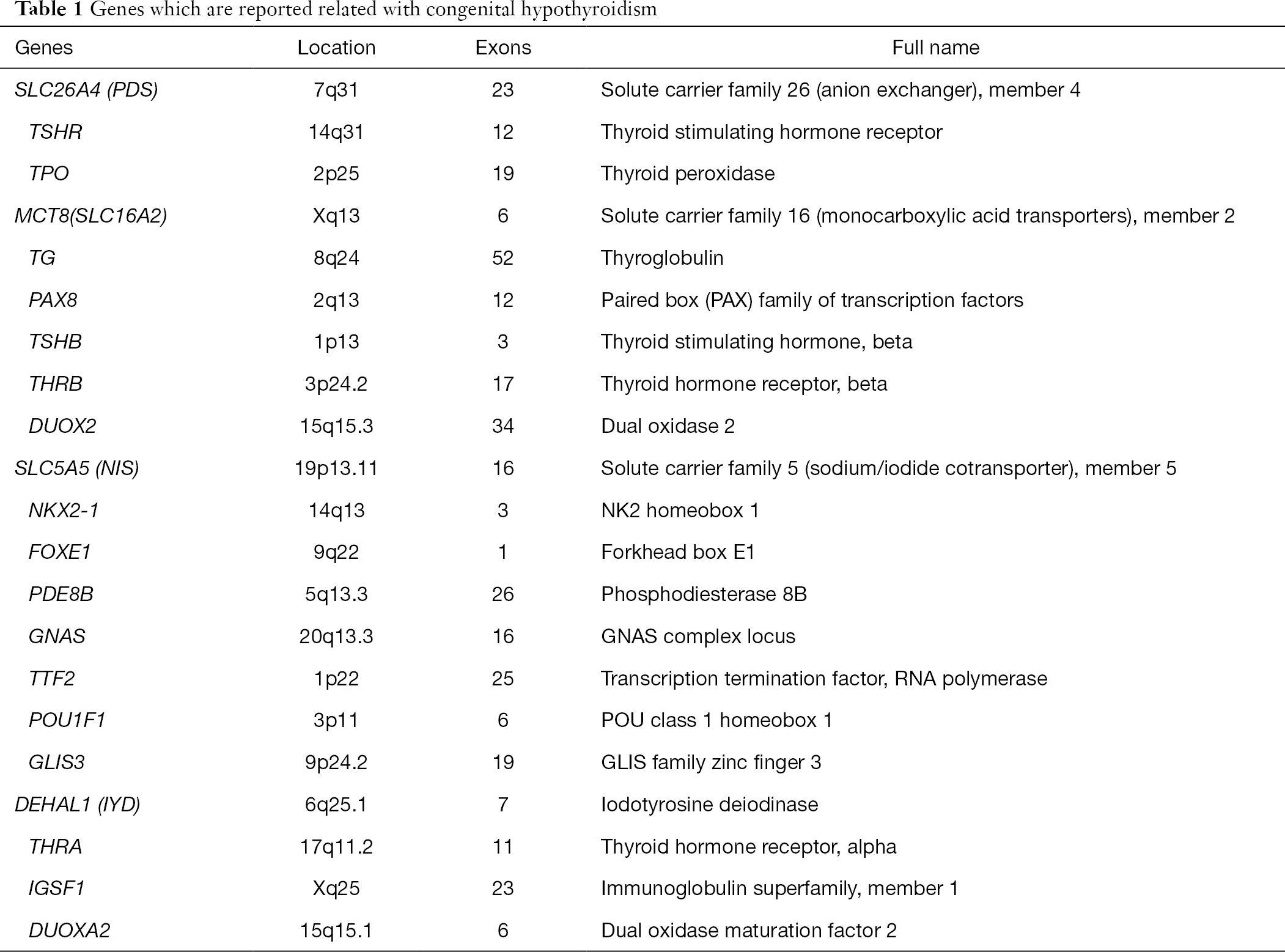 Thyroxine level of participants with mutations in DUOX2

Clinical course of participants with mutations in DUOX2

In most participants, thyroid function was improved and the dose of L-T4 could be reduced by around 2–4 years of age, except for the siblings in cases 13 and 14. Some 10 of the 20 patients aged 3–7 years old were able to have their L-T4 dose gradually reduced and then eventually stopped altogether at the age of 2–3 years. After stopping L-T4, these patients still followed up in our clinic and the levels of thyroid hormone continued to be normal. Case 13 and 14 were siblings with same homozygous mutations of p.R1110Q, and both developed PCH. They were born in 2010 and 2013, respectively; their doses of L-T4 were 50 µg per day at birth and are now 87.5 µg per day to maintain normal levels of TSH, fT3, and fT4 and PCH. Case 9 was lost due to ceased contact. In the other participants, 2 (cases 18 and 19) have had their L-T4 doses reduced to 12.5 µg and might try to stop L-T4 in the future follow-up. The participant known as case 4 has had their dose reduced to 25 µg per day. Cases 1 and 7 have reduced theirs to 37.5 µg per day. Case 10 and 20 (n=2) are maintained 50 µg per day. All patients were assessed as physically and psychologically normal until recently. This phenomenon indicates that most patients with DUOX2 mutations have slightly subclinical hypothyroidism (Table 2). During puberty, none of the transient cases showed signs of hypothyroidism (elevation of TSH or reduction of fT4 level). 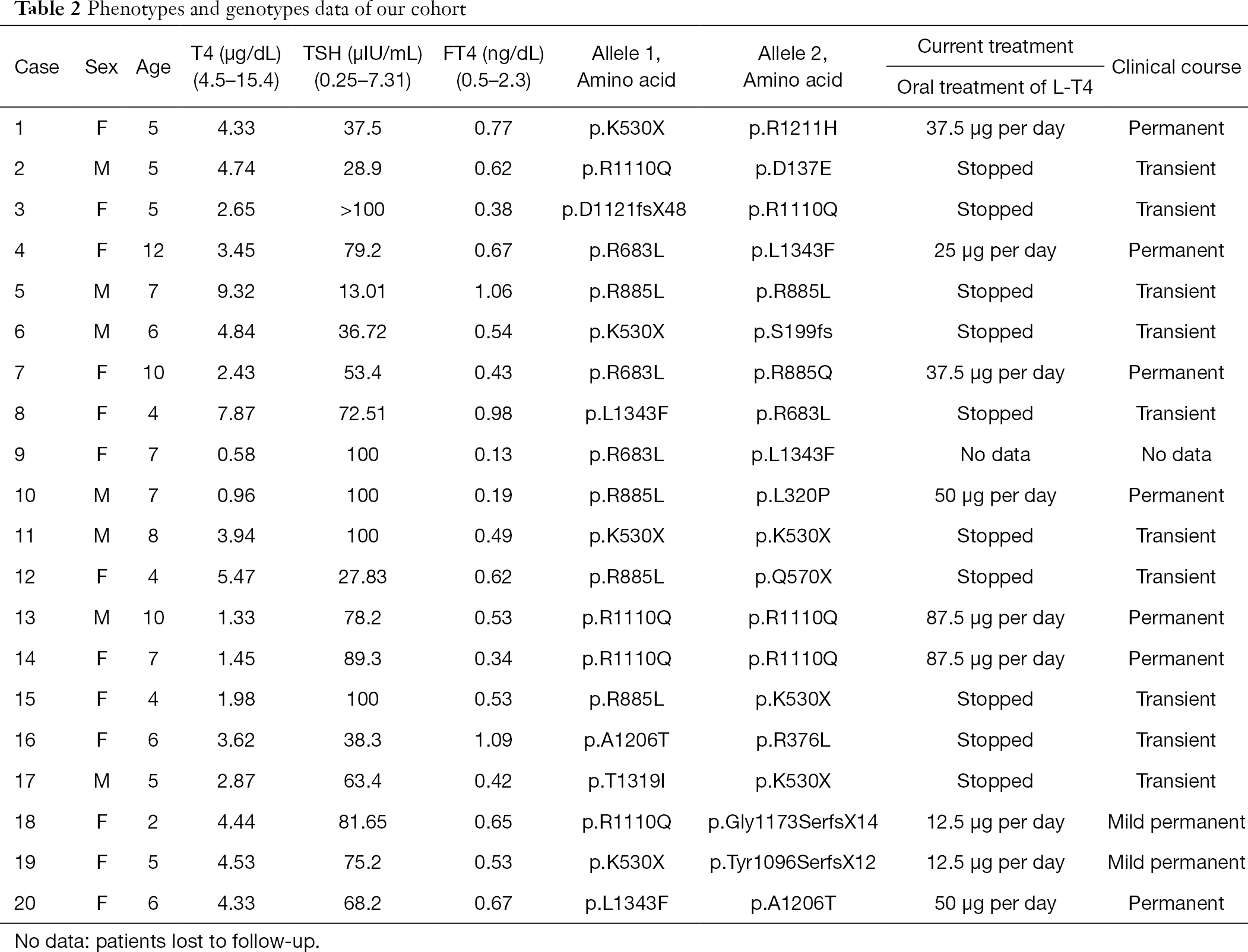 Table 2 Phenotypes and genotypes data of our cohort
Full table

Genotypes of patients with mutations in DUOX2

All participants had biallelic DUOX2 variants (Table 2). All parents of the participants in this study are carriers of monoallelic DUOX2 mutations, and they did not have a history of hypothyroidism. Of these 20 patients, 5 carried an R1110Q variant and 5 carried K530X variants, which indicated that both variants might be the hot sites of DUOX2 in our Chinese CH cohort. A total of 7 novel variants were detected (Table 2). Prediction of the functional effects of the novel missense variants was made using polyphen-2 and mutation taster. Novel variants c.3363_3364delCA (p.D1121fsX48), c.C3956T (p.T1319I), c.C411A (p.D137E), c.T959C (p.L320P), c.3516_3531delGTCCAAGCTTCCCCAG, and c.3285_3286delTT were predicted to be disease causing by mutation taster and probably damaging by polyphen-2. Novel variant c.G1127T (p.R376L) was predicted as disease causing by mutation taster but benign by polyphen-2.

Reports on CH caused by the DUOX2 gene have been gradually increasing. Since 2014, after the application of next-generation sequencing (NGS) technology to clinical genetic diagnosis services, large-scale research has become more common. Increasing numbers of mutation sites have been discovered. We reviewed the majority of published research and listed the reported mutation sites correlated with the natural course of CH (5,6,21-34) (Table 3). All these papers analyzed the correlation between phenotype and genotype, as it is considered that either TCH or PCH might be determined by the different mutations. Our study found that patients with homozygous variants of R1110Q may have PCH, and heterozygous variations may lead to TCH, consistent with some previous findings. In the results of other research institutions in China, the K530X and R885L variants were found to be common in the Chinese population (22,31,35), and these findings concur with our findings. In the majority of our cases, patients with R885L variants only had TCH, which indicated the R885L might be a benign variant. We also found 8 participants (case 2, 3, 10, 12, 16, 17, 18, and 20) with 7 novel variant sites that were predicted by software to be pathogenic. Most of these participants were TCH while cases 10, 16, and 20 were PCH. Cases 16 and 20 carried the same variant of A1206T, which hinted that the A1206T variant might be the cause of PCH. 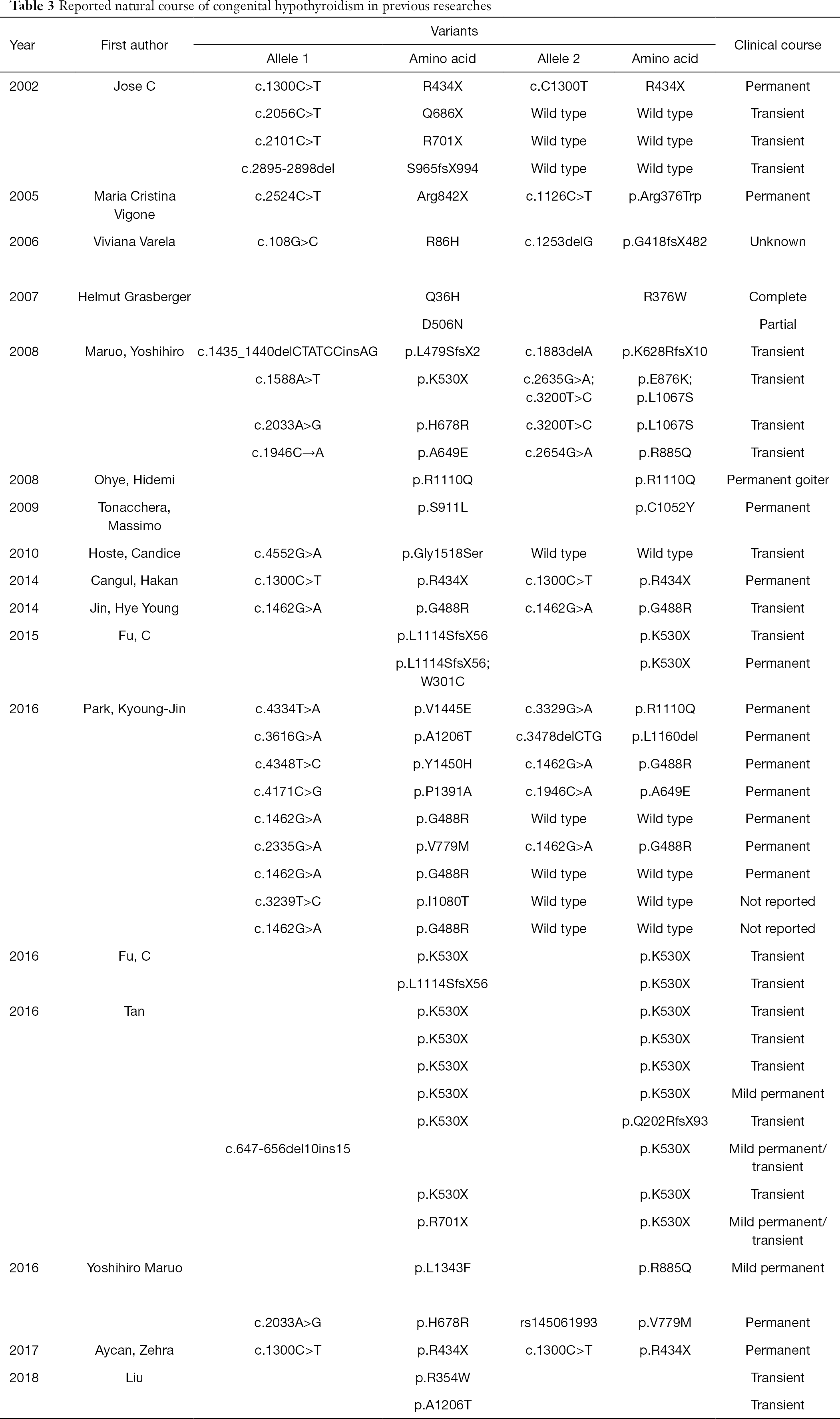 Through the changes in amino acids at these sites, as well as systematic reviews of other literature, we have some hypotheses for the pathogeneses of PCH and TCH. The possible mechanism by which DUOX2 mutations cause transient CH is as follows. A possible reason was raised in 2016 by Maruo et al., who investigated the prognosis of patients with CH due to DUOX2 mutations and raised the hypothesis that DUOX1 compensated the DUOX2 mutation in thyroid cells which produce H2O2 for tissue and coupling of tyrosine in the infancy and adult period. The expression level of DUOX1 is one-fifth of DUOX2. Even though DUOX2 enzyme activity is lost, DUOX1 maintains low levels of H2O2 throughout life. In the neonatal period, the demand for thyroid hormone (10–15 mcg/kg) is 5–7 times higher than that of adults (2 mcg/kg), then, the demand for thyroid hormones in infancy is gradually reduced. In the neonatal and infancy periods, the supply of H2O2 using DUOX1 alone may be insufficient, so individuals with DUOX2 deficiency are prone to signs of CH. As thyroid hormone requirements decrease during development, DUOX1 produces sufficient H2O2 to maintain thyroid hormone synthesis, regardless of DUOX2 mutations (36). This hypothesis may explain the occurrence of TCH, but it cannot explain the phenomenon of PCH.

In our study, variants of PCH patients were almost near the functional domain of DUOX2 (Figure 1), which may affect the normal expression of the gene. This might be a possible mechanism of PCH. Stop codon mutations are considered pathogenic in ACMG guidelines. However, most patients with a K530X variant were TCH while most patients with an R434X variant were PCH. We used software (https://www.swissmodel.expasy.org/interactive) to predict protein structure, and found the predicted protein structure of K530X was more similar and relatively intact compared with the wild type, but the predicted protein structure of R434X was more variable (Figure 2). The difference of protein structure could alter the activity of the DUOX2 protein, which may be the cause of differences in their natural course of disease.

Figure 1 Predicted structures of different DUOX2 gene variants. The structure of the DUOX2 indicated by the arrow in the figure is different. The structure of R434X is relatively loose and partially missing. The protein structure change caused by K530X is mild. DUOX2, dual oxidase 2. 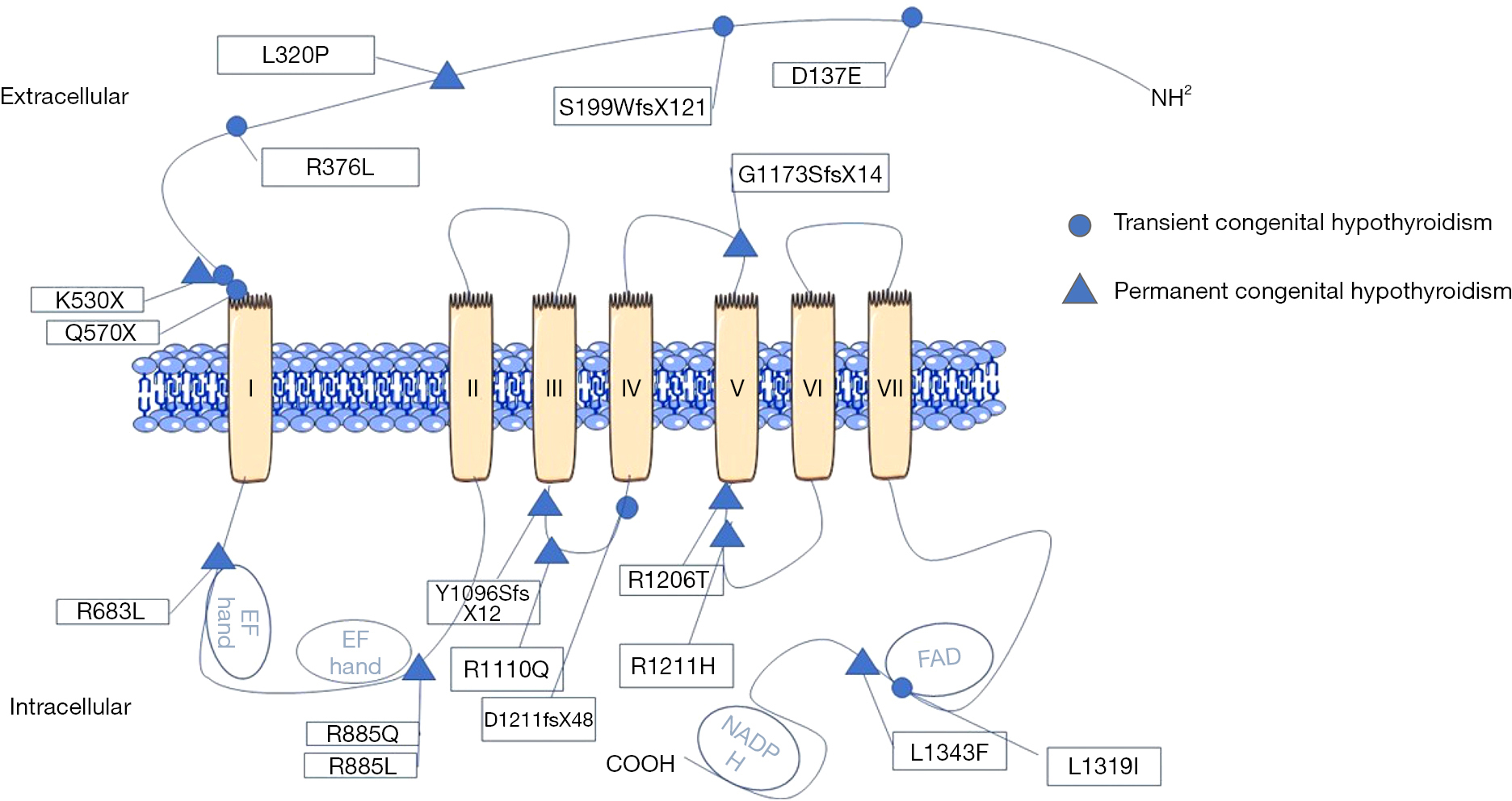 Figure 2 All variants detected in our cohort and their position in the functional domain of DUOX2 gene. DUOX2, dual oxidase 2.

This study suggests that our patients with congenital hypothyroidism caused by mutations in the DUOX2 gene are partially transient hypothyroidism. The important findings can be translated into reference materials for clinicians diagnosis and treatment behaviors. And there is a big expectation that the patients don’t need to take thyroxine for life, so that disease burden is decreased, and gain increasing compliance.

However, there are still limitations in our study. Thyroid globulin levels were not measured in our cohort. We were also unable to verify the functions of novel variants. Therefore, functional tests of novel DUOX2 variants such as constructing animal models or iPSC cells should be carried out in the future.

Funding: This study was supported by Fund EK112520180204 from Children’s Hospital of Fudan University.

Conflicts of Interest: All authors have completed the ICMJE uniform disclosure form (available at http://dx.doi.org/10.21037/atm-20-7165). The authors have no conflicts of interest to declare.

Ethical Statement: The authors are accountable for all aspects of the work in ensuring that questions related to the accuracy or integrity of any part of the work are appropriately investigated and resolved. The study was conducted in accordance with the Declaration of Helsinki (as revised in 2013). The study was approved by ethics board of Children’s Hospital of Fudan University (No. 2015-183 the registration number of ethics board) and informed consent was taken from all individual participants.