The proposed cohort involves multi-municipalities which have endoscopic screening program for gastric cancer. For implementation of endoscopic screening as national program, a quality assurance manual was developed (9) and it has been used in gastric cancer screening programs in regional areas. The ideal study areas that regularly follow the above-mentioned manual will be selected. Until 2019, the following municipalities in Japan that meet our requirements were recruited as study areas: Niigata, Kanazawa, Maebashi, Tottori, Yonago, Yuri-Honjyo, and Morioka. Also, Sendai, Setagaya-Tokyo, Yazu, and Fukuoka will be included in this study in 2020.

We performed a single-arm cohort study to assess the most appropriate endoscopic screening interval for gastric cancer in the low-risk group. The trial was registered at University Hospital Medical Information Network, Japan (UMIN000025839). The study was approved by the Ethics Committee of the Miyagi Cancer Association (No.1612, Date of approval 21st March 2017). Each participant provided written informed consent before inclusion in the study.

If individuals with a low risk of gastric cancer can be divided from individuals with a high risk of gastric cancer, the screening interval can be expanded. At this stage, the discrimination of individual risks for gastric cancer has not yet been strategically used in a gastric cancer screening program. Importantly, a new screening model can be developed regarding demographic information covering the history of H. pylori eradication, serological testing, and endoscopic diagnosis. The new screening model is expected to become more clearly delineated than serological testing alone. Participants without gastric cancer will continue to have endoscopic screening every 2 years. If the cumulative incidence in the low-risk group on the 3rd screening round (P2) becomes lower than that in the total screening group on the 2nd screening round (P1), the screening interval can be expanded from 2 to 4 years in the low-risk group (Figure 1). 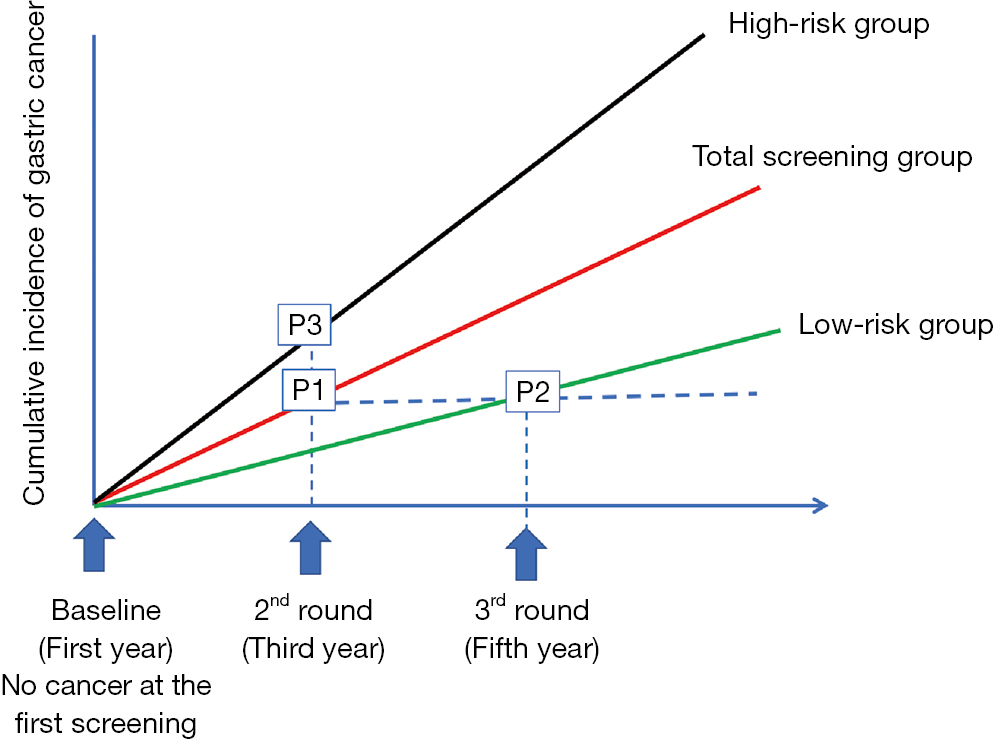 Figure 1 Basic concept of screening interval expansion. A new model that divides the participations into high-risk and low-risk groups will be developed by referring to the participants’ demographic information with reference to their history of H. pylori eradication, serological testing, and endoscopic diagnosis. If the cumulative incidence of gastric cancer in the low-risk group on the 3rd assessment round (P2) becomes lower than the cumulative incidence of gastric cancer in the total screening group on the 2nd assessment round (P1), the screening interval can be expanded from 2 to 4 years in the low-risk group.

Individuals who agreed to participate in this study and provided written informed consent were confirmed as study subjects. They are recommended to undergo consecutive screenings for gastric cancer every 2 years within 5 years (Figure 2). At the time of endoscopic screening, the participants were also asked to answer a questionnaire that covered the following: family history of gastric cancer, smoking habits, frequency of regular access to general physicians, history of UGI or endoscopy, diagnosis of gastric cancer, the history of H. pylori eradication, and EQ5D (10). After undergoing screening 3 times, a questionnaire survey is conducted at 7 years and 10 years after recruitment. 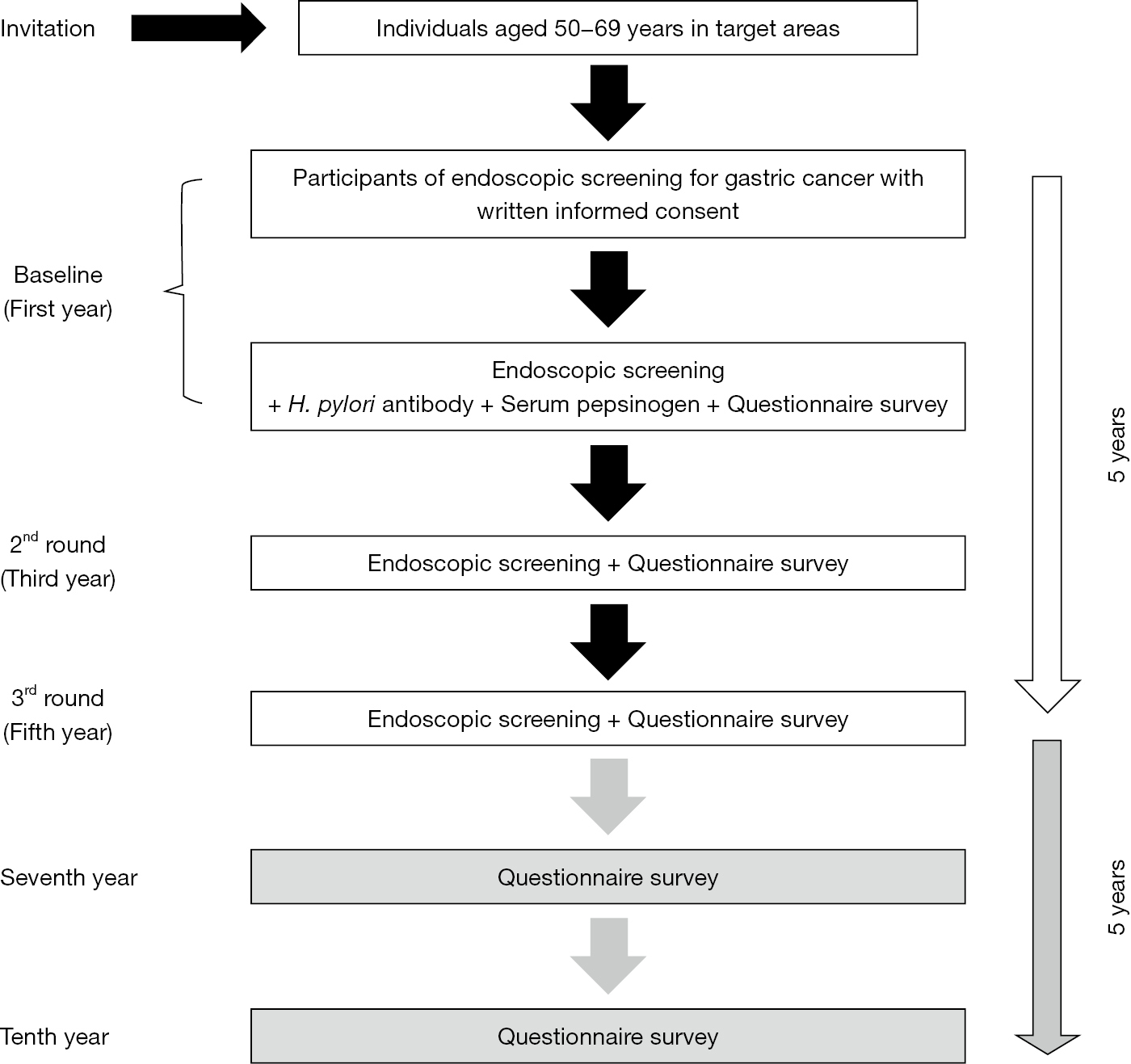 During the 10-year follow-up (Figure 2), gastric cancer incidence and mortality are confirmed using the official database. Population registers are also checked to confirm the inhabitants in the study area and their outward movement. For the primary outcome, the cumulative incidence of the low-risk group on the 3rd screening round (P2) will be calculated and compared with total screening group on the 2nd screening round (P1) (Figure 1). The secondary outcomes are the cumulative incidences of gastric cancer in the low-risk group and the high-risk group at 3, 5 and 10 years.

All study data is collected and maintained in regional management office which are mainly located in regional medical associations. The data includes informed consent forms, screening results, questionnaire survey and follow-up results. The regional management office revises them annually and submits the anonymous data to the central database. The principal investigators at the participating municipalities are responsible for collecting the medical research records from the screening database and population registries in their municipalities as well as reviewing and storing them. The central database maintains all data submitted from study areas. To maintain the quality of the database, regular checks are performed to identify missing or contradictory in their data.

Individuals who participate in endoscopic screening are divided into a high-risk group and a low-risk group for gastric cancer. Grading of atrophic gastritis was by the classification of Kimura and Takemoto (11). Borderline atrophic gastritis is defined as extending from the antrum toward the lesser curvature of the body and to the greater curvature. If the borderline atrophic gastritis does not reach the cardia, the atrophy grade is classified as a close type (C). If the borderline atrophic gastritis extends over the cardia, the atrophy is classified as an open type (O). Each group is further classified into 3 groups based on the atrophic areas: C-I, C-II, and C-III; O-I, O-II, and O-III. The distributions of atrophic gastritis in subjects undergoing endoscopic screening for gastric cancer have been reported in Kanazawa and Niigata, Japan. These places have conducted endoscopic screening for over 10 years (12,13). Based on these previous studies, 2 cut-off values were assumed at C-II and O-I (Table 1). The distribution and cumulative incidence were defined for low and high groups in each scenario, respectively. The sample size was calculated to achieve 5% on both sides with an 80% power. In the first scenario, 19,844 subjects were needed. In the second scenario, 10,372 subjects were needed. If the follow-up rate is assumed as 80%, 12,965 subjects are required for the second scenario.

We compared baseline characteristics of the high-risk and low-risk group by the Chi-square test, including sex, age, H. pylori infection, history of H. pylori eradication, history of gastric cancer screening and other demographic information which is obtained by a questionnaire survey. We examined the cumulative incidence of gastric cancer for 10 years. Cox-proportional hazards model will be used to calculate hazard ratios (HRs) with 95% confidence interval. The HR of the cumulative incidence of the low-risk group on the 3rd assessment round (P2) will be calculated refereed to total screening group on the 2nd assessment round (P1) (Figure 1). The HR of the cumulative gastric cancer incidence in the low-risk group will be also calculated referred to the high-risk screening group at 3, 5 and 10 years.

Funding: This study was financially supported by a government from the Japan Agency of Medical Research and Development Tokyo, Japan (Grant number: 20ck0106527h). The funder had no role in the conceptualization of the study design, data collection and analysis, decision to publish, or preparation of the manuscript.

Conflicts of Interest: All authors have completed the ICMJE uniform disclosure form (available at http://dx.doi.org/10.21037/atm-20-5949). The authors have no conflicts of interest to declare.

Ethical Statement: The authors are accountable for all aspects of the work in ensuring that questions related to the accuracy or integrity of any part of the work are appropriately investigated and resolved. The study was approved by the Ethics Committee of the Miyagi Cancer Association (No.1612, Date of approval 21st March 2017).