Herein we present the results of a first survey conducted amongst the European Society of Thoracic Surgeons (ESTS) members in order to provide insights into the rate of adoption, currents trends and potential future expansion of NITS within a large cohort.

To investigate the interest in NITS within a large cohort of thoracic surgeons, a 14-question-based web-questionnaire has been formulated and e-mailed to members of the ESTS with a link to a web-survey provider where the questionnaire was made available online (Survey Monkey® Inc., Palo Alto, CA, USA) asking to fill in the questionnaire. 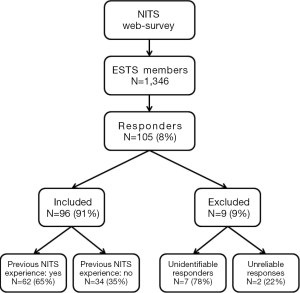 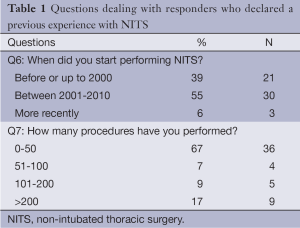 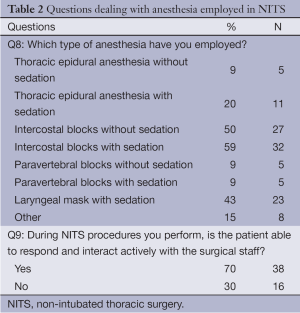 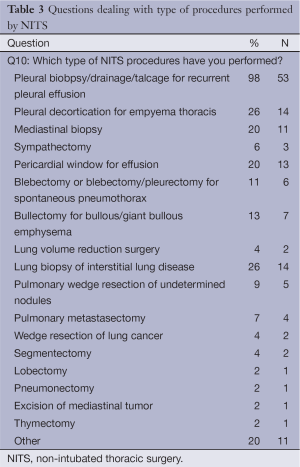 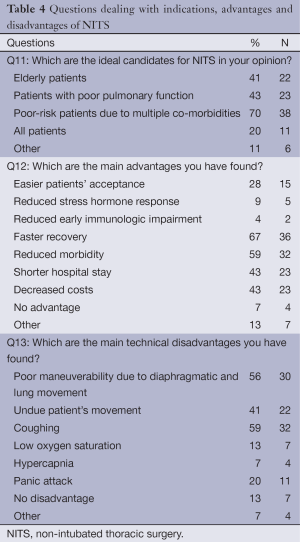 Once closed the web-survey, all data were initially entered into an Excel database (Microsoft, Redmond, Washington, USA) and the analysis was performed using the Statistical Package for the Social Sciences Windows, version 15.0 (SPSS, Chicago, Illinois, USA).

Responders who did not indicate their name and/or the referring institution as well as those who provided unrelated, clearly unreliable responses were excluded from the data analysis. Instead, responders who provided identification details but did not respond to all questions were included.

Descriptive statistics consisted of the median with interval range (IR) for parameter with gaussian distributions (after confirmation with histograms and the Kolgomorov-Smirnov test) or frequencies (%). 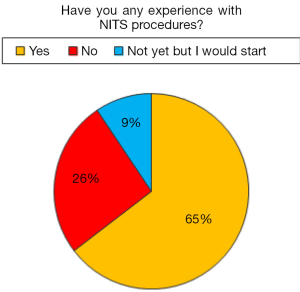 Fifty-four responders completed the entire questionnaire. Amongst the Institutions of responders who provided clear identification details there were 71 academic hospitals (74%), 16 community hospitals (17%), and 9 private institutions (9%).

Overall, out of 96 responders, 55 were from EC countries whereas 41 from non-EC countries.

The geographical distribution of responders who reported to perform NITS is detailed in Figure 3. 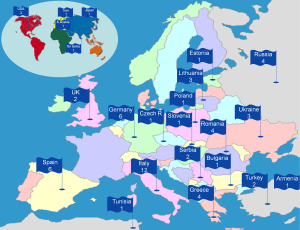 Questions dealing with starting time and surgical volume with NITS are included in Table 1. The majority of responders reported to have started in performing NITS between 2001 and 2010 whereas a minority affirmed to have already started before the 2000. The median time of beginning was 2004 (IR, 1990-2012).

The most frequently performed procedures (Table 3) were indicated to be in decreasing order of frequency, thoracoscopic management of recurrent pleural effusion, pleural decortication for empyema thoracis and lung biopsy for interstitial lung disease, followed by pericardial window and mediastinal biopsy. More complex procedures such as lobectomy, lung volume reduction and thymectomy have been reported to be performed by a minority of responders.

Questions dealing with indications, advantages and disadvantages of NITS are detailed in Table 4. Regarding optimal candidates for NITS, poor-risk patients due to multiple co-morbidities were considered the ideal candidates by most of responders followed in frequency by patients with poor pulmonary function and elderly patients.

Faster recovery, reduced morbidity and lower costs were deemed by most of responders as the main potential advantages offered by NITS whereas coughing, poor maneuverability due to diaphragmatic and/or lung movement, and undue patients movements were reported as the main disadvantages.

At the last question dealing with future perspectives, 69% of responders believed that NITS procedures will be likely to increase in the near future (Figure 4). 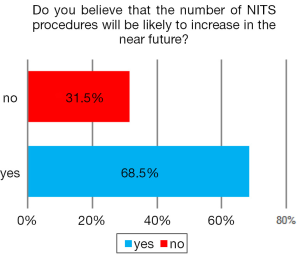 Figure 4 Bar graph detailing in percentages that the answers to the 14th question.

Surveys are now quite commonly employed to collect primary quantitative data from healthcare professionals in order to gather valid, reliable, and discriminatory data (7,8).

This survey represents the first overview of the current trends and believes on NITS within the ESTS population and may represent a good platform to start cooperative investigational efforts to provide insights into the most debated and unresolved issues.

Overall, the number of responders who demonstrated an interest in NITS included an adequate representative of University, community and private hospitals across European and extra-European countries.

The rate of thoracic surgeons who expressed an interest in NITS accounted for 74% of responders and the number of surgeons who declared to perform NITS procedures was unexpectedly high provided that NITS entails non-standardized strategies and so far the majority of publications came from few research teams. In addition, 9% of responders admitted no experience but declared to have planned to start it in the near future. It is also worthy of note that on the final question related to a potential future expansion of NITS, about 70% of responders believed that the number of NITS procedures will be likely to increase in the near future. This perception can be considered highly satisfactory and contributes to encourage further investigation on this topic.

Regarding the starting time of individual experiences, 39% of responders affirmed to have already matured an experience with NITS reporting a median experience of 9 years. Overall, 67% of responders indicated a median number of 30 procedures only whereas only 17% of them reported an experience of more than 200 procedures. These findings are in line with the prevalence of literature reports on this topic indicating few centers which are relevantly dedicating their research activity to NITS (1-3,5,6) but on the same time they disclose a satisfactorily diffuse interest on these strategies.

Among the various anesthesia protocols, which have been proposed, the present survey indicated that intercostals block with mild sedation is currently preferred by most of responders. The reasons leading to this preference are conjectural and may include the technical simplicity of this type of anesthesia and the fact that most of responders limited their experience to quick and simple VATS procedures, which are optimally suited to be performed by intercostals block only. On the other hand, surgeons who performed also more technically demanding procedures have usually preferred thoracic epidural anesthesia, which is somewhat more technically demanding but is supposed to assure superior thoracic analgesia (1,2).

In this survey most of responders indicated that simple procedures including thoracoscopic management of recurrent pleural effusion, pleural decortication for empyema thoracis and lung biopsy for interstitial lung disease were those most frequently carried out by NITS whereas only few surgeons affirmed to perform more demanding procedures such as lobectomy, lung volume reduction surgery and thymectomy. This finding reinforces the hypothesis that for several simple procedures such as management of recurrent pleural effusion or pneumothorax, use of general anesthesia and one-lung ventilation is an unnecessary and not-risk-free option (3) provided that they can be safely and reliably performed by more simple anesthesia methods.

The empiric fear that a surgical pneumothorax is poorly tolerable by spontaneously ventilating, awake patients has been contradicted by several literature reports showing that adequate ventilation and satisfactory oxygenation can be assured throughout the procedure in most of operated patients and even in those with severely impaired respiratory function (16,19,20).

These findings seem in line with the survey responses on question dealing with optimal candidates for NITS. In fact, the majority of responders indicated that multiple comorbidity, poor pulmonary function and advanced age should be considered as the main eligibility criteria for NITS. This result is notable and if confirmed by future investigation might eventually lead to widen the rate of surgical candidates at least to a part of the patients who are currently considered unfit for surgery due to associated comorbid conditions or poor pulmonary function. Finally, in is also worthy of note that 20% of responders consider NITS as a suitable treatment option to be employed in all patients.

As far as the main advantages and disadvantages of NITS were concerned, most of responders indicated faster recovery, reduced morbidity, shorter hospital stay and lower costs as the main potential advantages of NITS. This result suggests the existence of a relative consensus with literature findings of smoother and quicker postoperative recovery achieved by NITS as compared with results of intubated-thoracic surgery. Further potential advantages could also be related to a reduced postoperative stress hormone response and a lesser impairment in lymphocytes activity, which have been anecdotally reported (21,22) but await confirmation from future investigations.

On the other hand, coughing, poor maneuverability due to diaphragmatic and/or lung movement, and undue patients movements were indicated as the main disadvantages. These findings suggest that overall, as compared with intubated-anesthesia, factors that affect negatively the achievement of an immobile operative field and that can thus render more technically demanding surgical maneuvering, are considered as the major drawbacks of NITS.

Hence, standardization of technical refinements that can abolish the occurrence of inadvertent coughing and patients undue movements (6) will be required to promote a more diffuse acceptance and adoption of NITS strategies.

The main limitation of this survey relates to a relatively low response rate. However, it must be taken into account that at least in some instances, one representative of a single Institution responded to the questionnaire on behalf of the whole group that may include several ESTS members. Although we cannot present this figure, it is clear that the crude response rate underestimated the real one. Moreover, the questionnaire was constructed to preferentially retrieve information from surgeons who already had an experience with NITS or who were in anyway interested in the topic. Accordingly, we believe that the survey results are meaningful since they indicated a much wider rate of adoption of NITS than that inferable by solely taking into consideration the available literature on this topic. In addition, when taking into consideration other similar surveys performed among the same population, the response rates varied considerably depending both on the topic and the questionnaire characteristics.

Our response rate is lower than that reported by Internullo et al. even though NITS must be still considered a not standardized option when compared with procedures such as pulmonary metastasectomy and resection of thymic tumors, which are almost universally accepted and commonly carried out within the standard thoracic surgery practice.

We acknowledge that overall, survey results must not be taken as consensus statements or recommendations. Nonetheless, they may represent a good platform to start further multi-institutional collaborative efforts aimed at providing more definitive insights into the several issues still awaiting an answer.

This survey, suggests that NITS is already quite widely adopted among ESTS members and is mainly employed to perform simple VATS procedures. A future increase in the number of procedures performed by NITS has been foreseen by the majority of responders suggesting that the rationale underlying these strategies is deemed valid and this research field is of general interest.

We hope that future multi-institutional and multi-disciplinary cooperative investigation conducted either within and outside the ESTS will better explore indications, methods and results of NITS to eventually allow the drawing of reliable consensus statements.