Obstructive sleep apnea (OSA) is a common chronic disease that is characterized by recurrent complete or partial upper airway obstruction during sleep resulting in intermittent hypoxia, hypercapnia, and cortical microarousals (1). Accumulating evidence indicates that OSA is related to various clinical sequelae, including diabetes, hypertension, dyslipidemia, stroke, and cardiovascular events (2,3). Insulin resistance has been suggested as an important shared risk factor for these sequelae (4,5).

OSA can occur during rapid eye movement (REM) sleep as well as non-REM (NREM) sleep. Although REM sleep accounts for only approximately 25% of a person’s total sleep period, the propensity for upper airway collapse during REM sleep is greater due to the cholinergic mediation of genioglossus muscle suppression during this stage (6). Additionally, during REM sleep, the duration of respiratory events is longer, oxygen desaturation is greater, and respiratory effort is lower (7,8). Despite previous studies having uncovered an independent relationship between OSA and insulin resistance (9,10), the REM sleep stage is a unique stage, and the associations of insulin resistance with respiratory events and sleep duration during this stage have not been illuminated.

Therefore, the primary objective of this large cross-sectional study was to investigate the association between AHIREM and insulin resistance in adults of all ages using laboratory PSG data.

We present the following article in accordance with the STROBE reporting checklist (available at http://dx.doi.org/10.21037/atm-20-3165).

The data reported in this cross-sectional study were obtained from the Shanghai Sleep Health Study (SSHS) cohort, which has been previously described (19). Initially, 4,062 consecutive participants aged 18 to 88 who underwent overnight PSG for suspected OSA in the sleep center of Shanghai Jiao Tong University Affiliated Sixth People’s Hospital between 2009 and 2016 were recruited. The exclusion criteria were as follows: (I) a history of treatment for OSA; (II) use of lipid-lowering drugs; (III) presence of chronic diseases, such as chronic kidney disease, psychiatric disorders, malignancy, or hyperparathyroidism; (IV) <18 years of age; (V) treatment with insulin or hypoglycemic agents; (VI) REM sleep duration <30 min, which would reduce the precision of AHIREM estimates (13); and (VII) missing clinical data. Finally, a total of 2,899 participants were included in this study (Figure 1). Written informed consent was obtained from all participants. This study was approved by the Internal Review Board of the Institutional Ethics Committee of Shanghai Jiao Tong University Affiliated Sixth People’s Hospital [2018-KY-021(K)] and was conducted in accordance with the tenets of the Declaration of Helsinki (as revised in 2013). 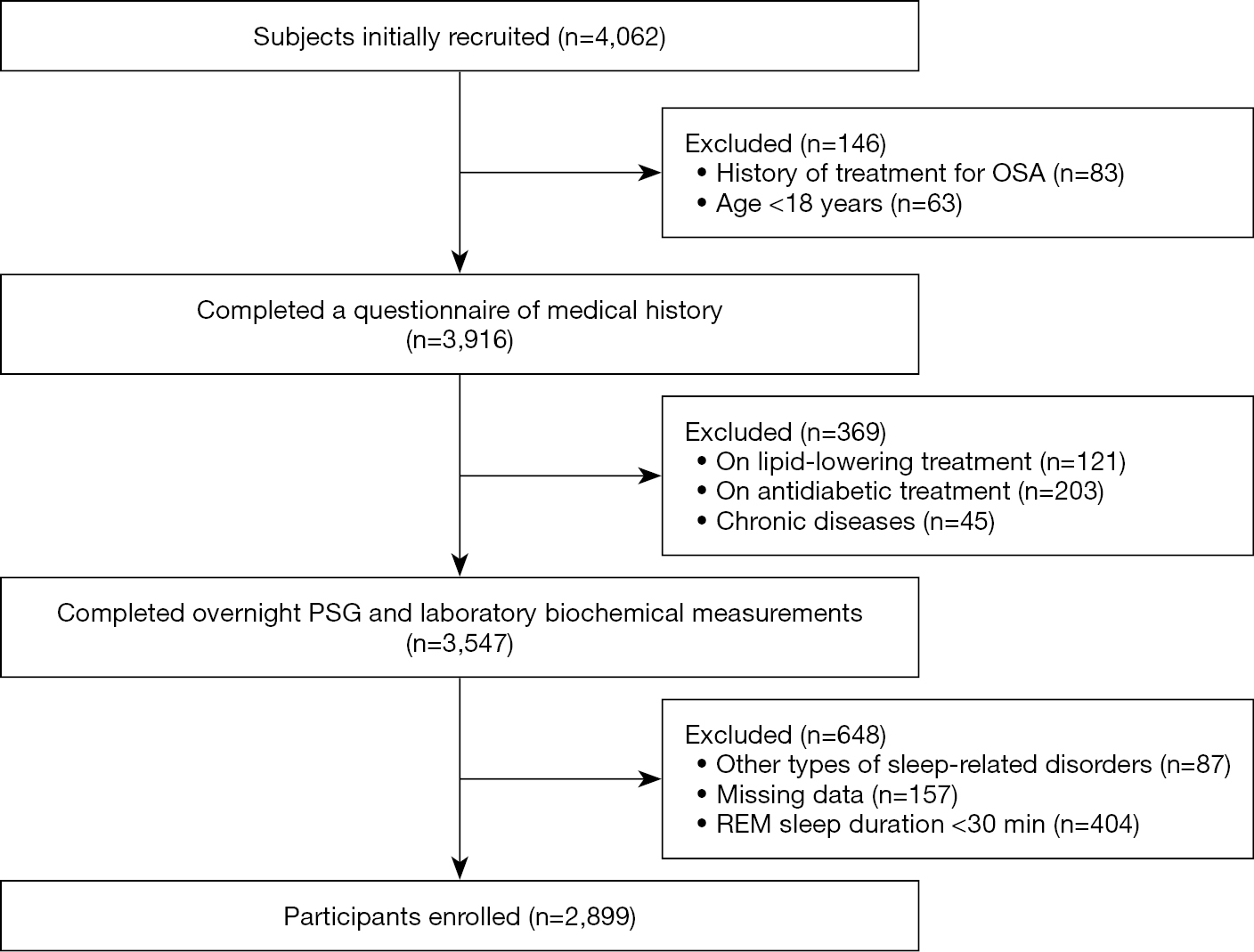 Participants’ height and weight were measured according to standard procedures, with all participants wearing light clothes and barefoot. Body mass index (BMI) was calculated as the weight (kg) divided by the height squared (m2), and waist circumference (WC) was measured midway between the lower costal margin and iliac crest. According to the recommendations of the International Diabetes Federation (IDF) for Chinese adults, a WC of ≥90 cm in men, or ≥80 cm in women was defined as abdominal obesity (25). BP was recorded as the average value of three sequential measurements using standard procedures and mean arterial pressure (MAP) was calculated as (systolic BP + 2 × diastolic BP)/3.

Descriptive statistics were expressed according to AHIREM quartiles with continuous variables being presented as means ± standard deviations (SDs) and categorical variables being presented as percentages. Linear trends across the AHIREM quartiles were assessed using polynomial linear trend tests for continuous variables and linear-by-linear association tests for dichotomous variables. Collinearity diagnostics were carried out to eliminate possible multicollinearity among variables. The two steps of the collinearity analyses were: (I) a preliminary analysis using Spearman’s correlation; and (II) collinearity diagnostics to determine the selected covariates in the multivariate regression analyses. The detailed results are shown in Tables S1-S9. Additionally, a correlation heat map was constructed using the corrplot package in R software. Binary logistic regression analyses were performed to assess odds ratios (ORs) and 95% conﬁdence intervals (95% CIs) for hyperinsulinemia and abnormal HOMA-IR, FIRI, and Bennet’s ISI values. Several factors, including age, sex, BMI, abdominal obesity, smoking status, alcohol consumption, and MAP, were incorporated into the multivariate regression model, while AHINREM was included when necessary. Linear trends across the four groups were computed by examining the median AHIREM values for each quartile and conducting an overall F-test. Confirmatory analysis restricted to the subgroup with AHINREM values of ≤55.8 (the highest quartile) was performed to further exclude the influence of AHINREM. 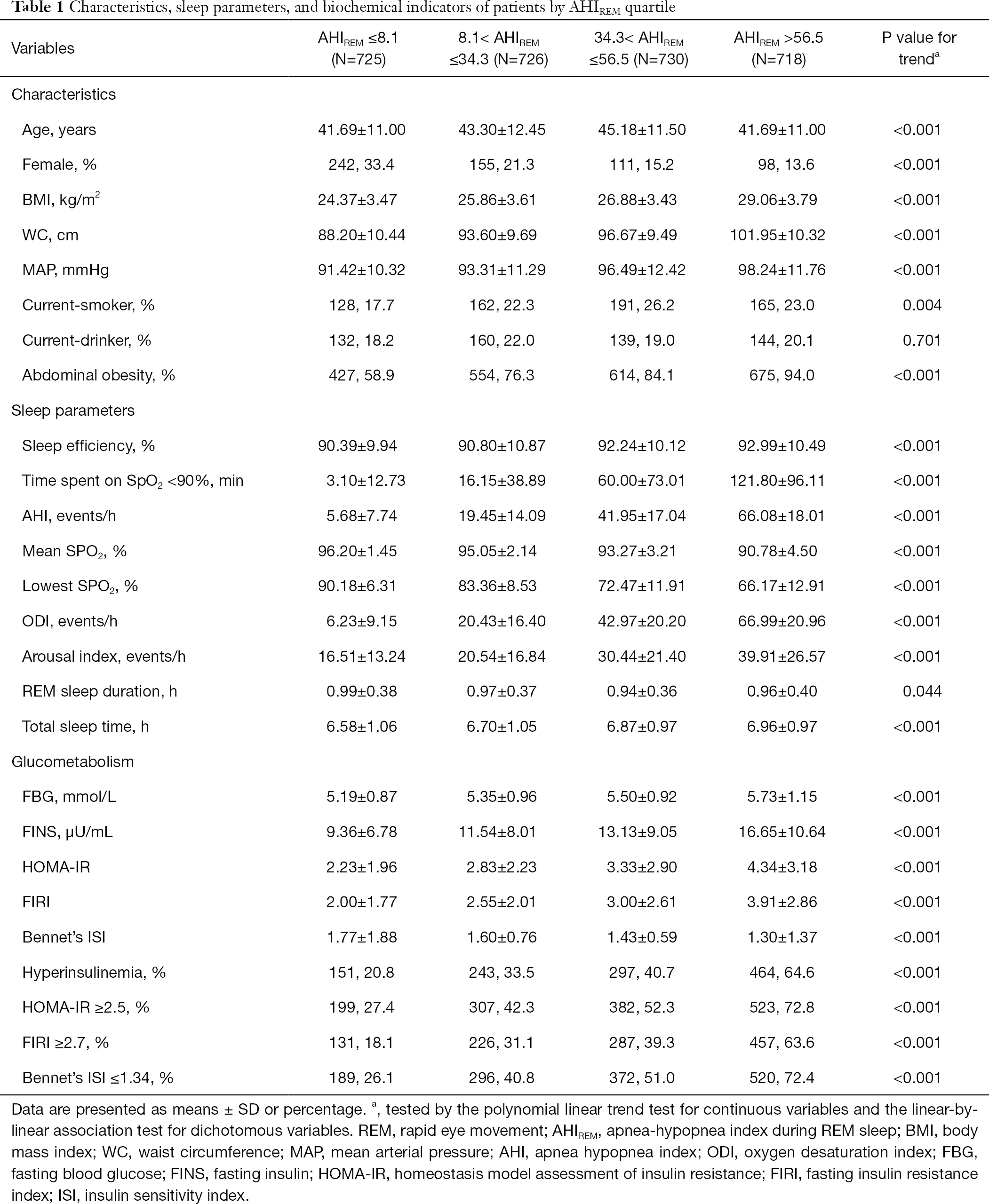 Association between AHIREM and insulin resistance

Figure 2 presents a heatmap based on the Spearman correlation matrix. In the heatmap, numerical values are displayed by colors, with weaker correlations between variables displayed in light colors and stronger correlations displayed in darker colors, such as red or violet. AHIREM was found to be weakly correlated with Bennett’s ISI (r=−0.15), and mildly correlated with FINS (r=0.31), HOMA-IR (r=0.31), FIRI (r=0.31), hyperinsulinemia (r=0.33), abnormal HOMA-IR (r=0.34), abnormal FIRI (r=0.35), and abnormal Bennett’s ISI (r=0.35) (all P values <0.01). 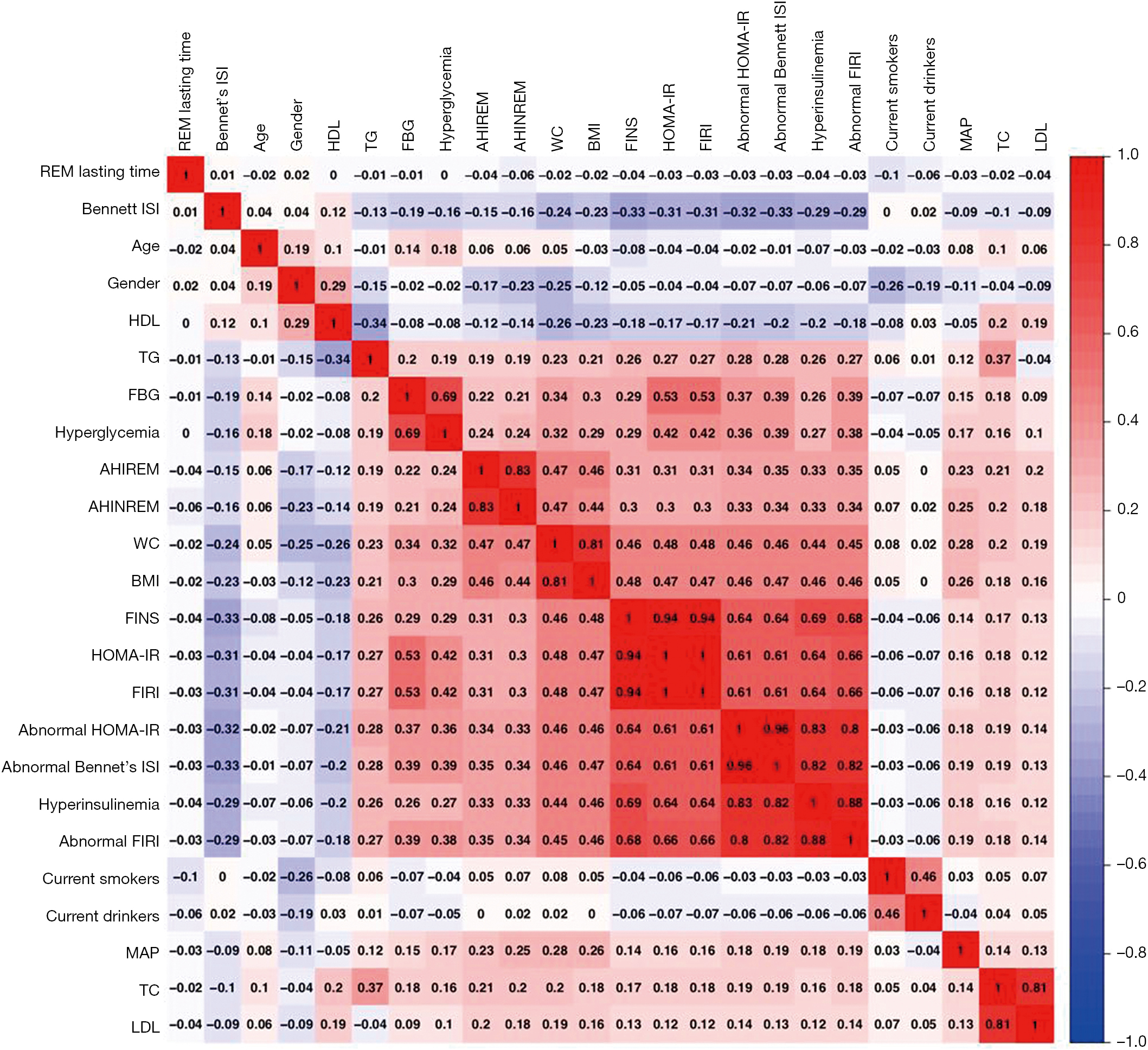 After adjustment for age, sex, BMI, WC, MAP, smoking status, and alcohol consumption in Model 1 and accounting for AHINREM in Model 2, the association between AHIREM and insulin resistance (as measured by hyperinsulinemia and abnormal HOMA-IR, FIRI, and Bennett’s ISI; Table 2) was estimated using logistic regression models. In Model 1, significant positive linear trends were observed in the ORs for insulin resistance as the AHIREM quartile increased (P<0.001 for all linear trends). After the incorporation of AHINREM into Model 2, the linear relationship was slightly attenuated but remained significant (P<0.01 for all linear trends; Table 2 & Figure 3A,B,C,D). 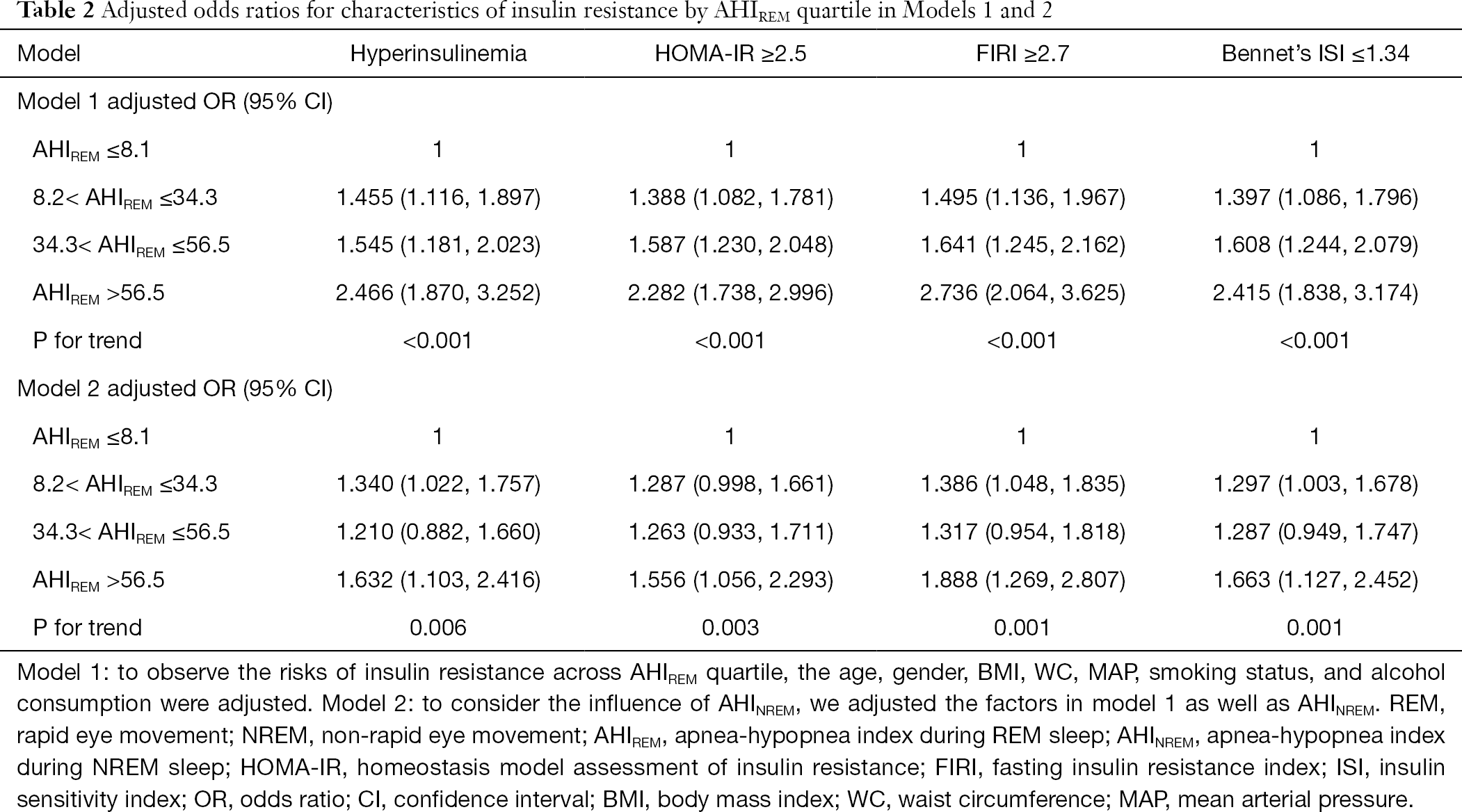 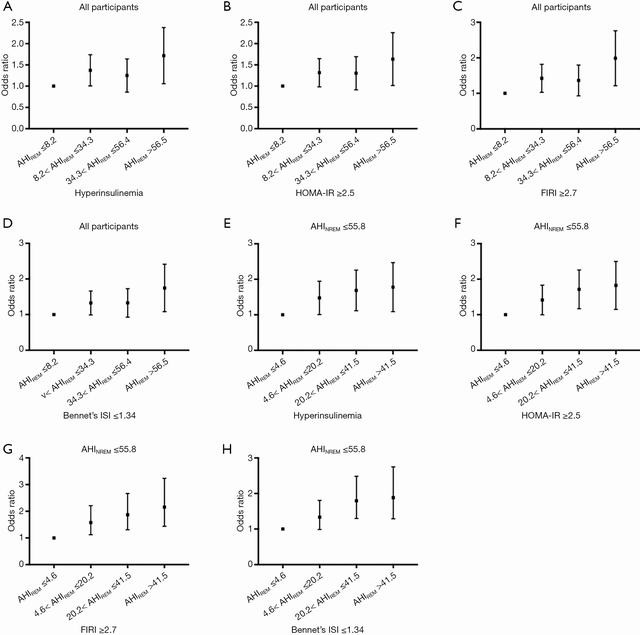 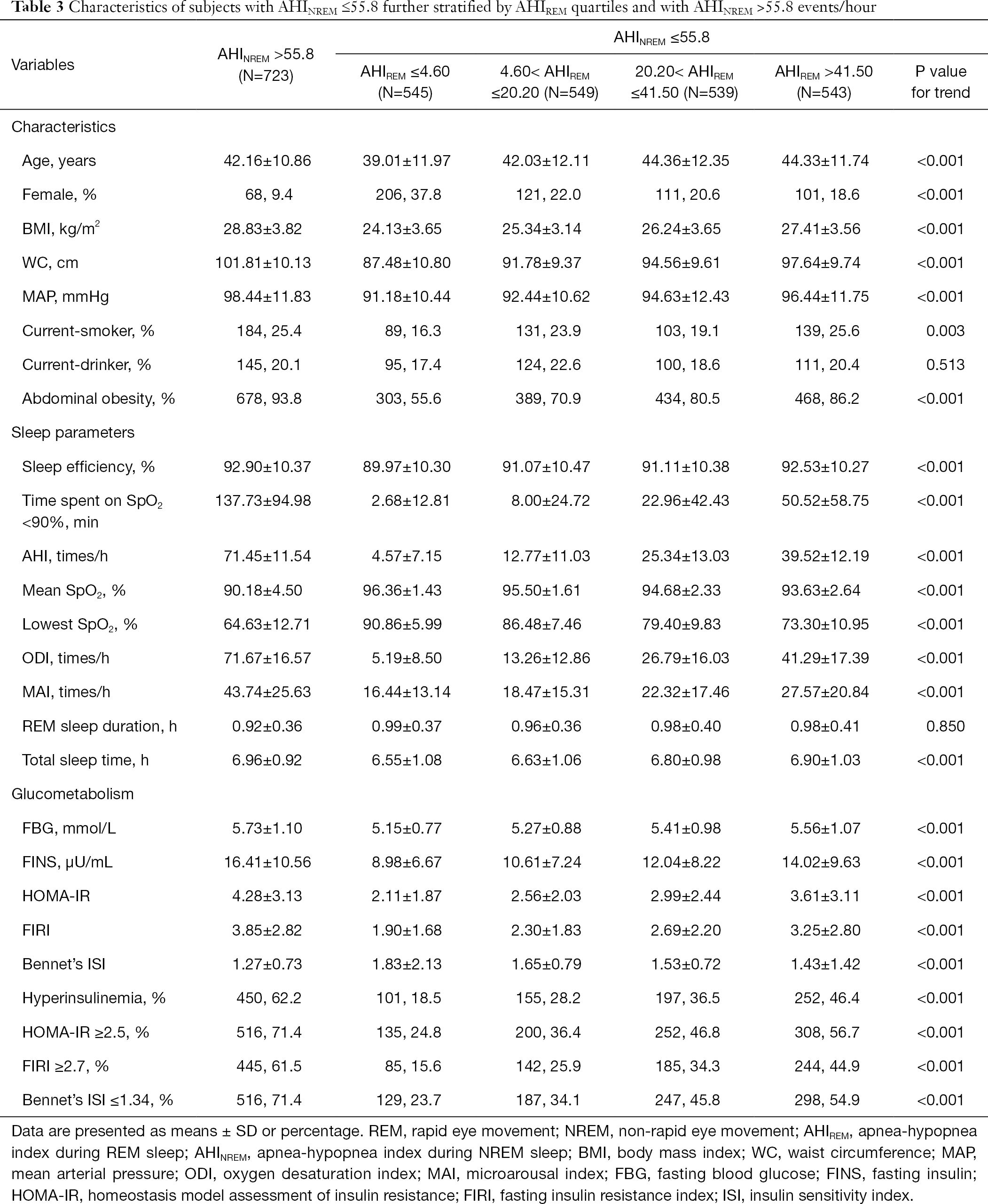 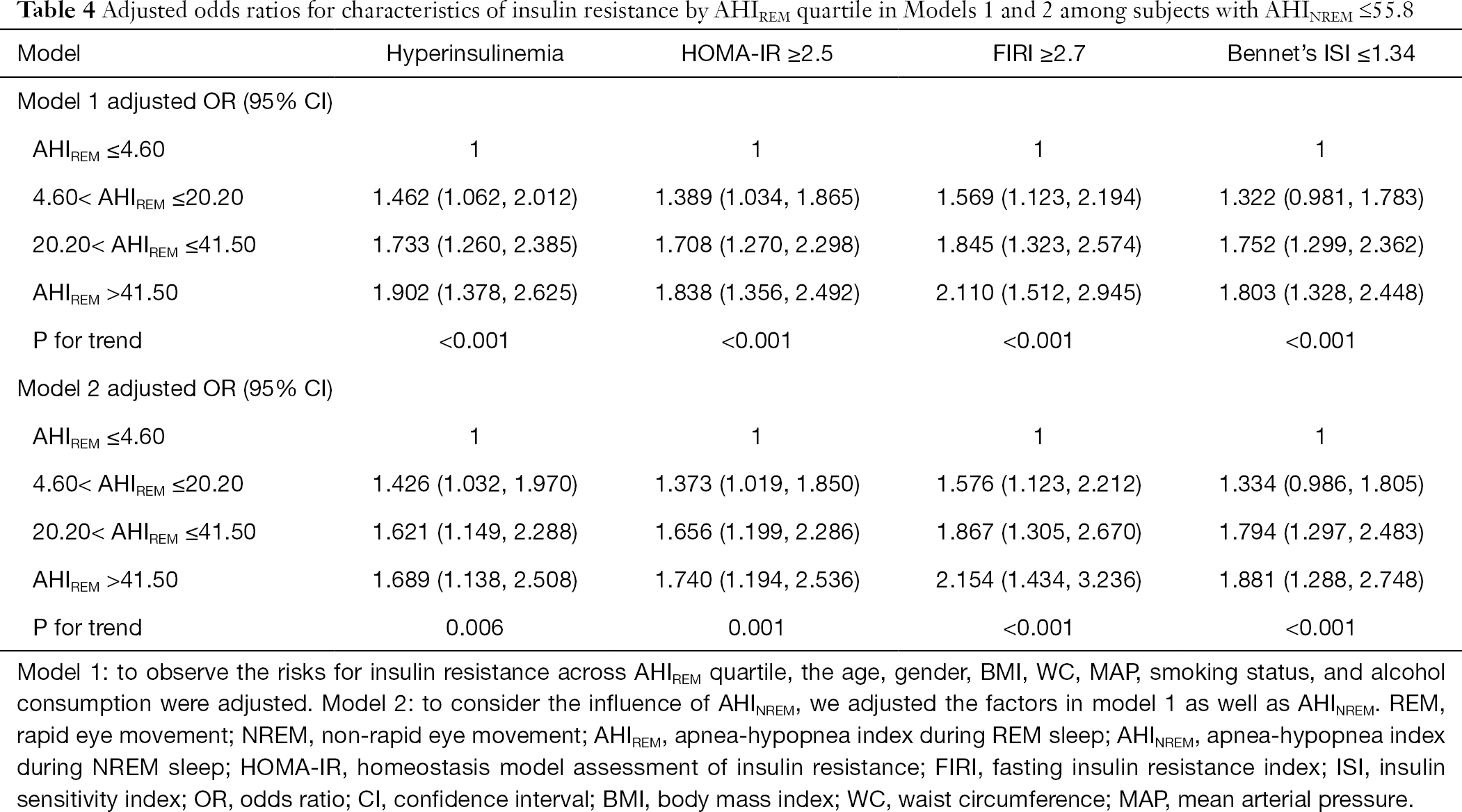 Table 4 Adjusted odds ratios for characteristics of insulin resistance by AHIREM quartile in Models 1 and 2 among subjects with AHINREM ≤55.8
Full table

This large cross-sectional study demonstrated an independent association between AHIREM and insulin resistance in adults of all ages based on laboratory PSG data and multivariate adjustments. Furthermore, a positive linear trend for the risk of insulin resistance across AHIREM quartiles was observed after adjustment for multiple variables, including AHINREM. Additionally, REM sleep duration was independently associated with the risk of hyperinsulinemia.

Several previous studies have evaluated the associations of AHIREM with various clinical sequelae, including lipid metabolism, hypertension, peripheral arterial stiffness, and cardiovascular events (11-13,26,27); however, the association between AHIREM and insulin resistance, which is a common and important risk factor, has rarely been investigated. While a recent study (14) reported that AHIREM was associated with insulin resistance, this study was limited by the inclusion of only middle-aged and elderly participants; lack of in-laboratory PSG data; lack of adjustment for BP, which is closely associated with insulin resistance (15,16); and lack of risk assessment of insulin resistance. The present study accounted for the above-mentioned limitations, and found that, after adjustment for age, sex, BMI, WC, MAP, smoking status, alcohol consumption, and AHINREM, patients with higher AHIREM had an increased risk of insulin resistance. The potential mechanisms involved in this association may include increased sympathetic nerve activity during REM sleep, decreased genioglossus muscle tone due to hypoglossal nerve inhibition and prolonged apnea and hypopnea (7,8,28).

As the first-line treatment for OSA, continuous positive airway pressure (CPAP) therapy can enlarge the airway, alleviate somnolence, and improve health status (29). However, no consensus has been reached as to whether this therapy can improve insulin resistance. Martinez and colleagues (30) reviewed related research and found that CPAP improved insulin levels and insulin resistance, whereas Jullian and colleagues (31) failed to find these beneficial effects. As REM sleep occurs mainly during the latter half of sleep, 4 hours of CPAP therapy per night may not cover all periods of REM sleep. Additionally, in the present study, AHIREM was independently associated with insulin resistance. Therefore, it is plausible that untreated OSA during REM sleep could weaken the effects of CPAP on insulin resistance. In contrast, 7 hours of CPAP therapy per night covers more than 85% of REM sleep (12). Therefore, insufﬁcient CPAP use may be the reason for the poor treatment effects, suggesting that more attention should be paid to verifying whether nightly CPAP treatment should be extended beyond 4 hours. In addition, higher CPAP pressure during REM sleep may be effective in thoroughly eliminating respiratory events.

The present study has several strengths, including its large sample size, assessments of standard in-laboratory PSG data, employment of multivariate adjustments, and inclusion of adults of all ages. However, there are several limitations that should be noted. Firstly, this was a cross-sectional study, so causality could not be assessed. Secondly, this was a hospital-based observational study rather than a community-based, prospective study. Thirdly, the participants’ dietary, lifestyle, and physical exercise habits, all of which may affect insulin resistance, were not assessed. Thus, not all potentially confounding factors were fully controlled. Finally, certain data, such as the hemogloblinA1c (HbA1c) levels, were unavailable, meaning the level of insulin resistance could not be fully evaluated.

In summary, the present study demonstrated an independent association between the frequency of respiratory events during REM sleep and insulin resistance, as assessed by the presence of hyperinsulinemia, abnormal HOMA-IR, FIRI, and Bennett’s ISI, in adults with suspected OSA. Additionally, REM sleep duration was found to be associated with hyperinsulinemia. These findings suggest that improvement of sleep architecture and sleep quality may be beneficial in reducing the risk of insulin resistance.

We thank all of the participants and survey staffs for their participation.

Reporting Checklist: The authors have completed the STROBE reporting checklist. Available at http://dx.doi.org/10.21037/atm-20-3165

Conflicts of Interest: All authors have completed the ICMJE uniform disclosure form (available at http://dx.doi.org/10.21037/atm-20-3165). The authors have no conflicts of interest to declare.

Ethical Statement: The authors are accountable for all aspects of the work in ensuring that questions related to the accuracy or integrity of any part of the work are appropriately investigated and resolved. This study was conducted in accordance with the tenets of the Declaration of Helsinki (as revised in 2013) and was approved by the Internal Review Board of the Institutional Ethics Committee of Shanghai Jiao Tong University Affiliated Sixth People’s Hospital [2018-KY-021(K)] and informed consent was taken from all the patients.