The proteinogenic branched-chain amino acids (BCAAs) valine, leucine and isoleucine belong to the nine essential amino acids for humans. Dietary BCAAs are usually derived from meat, fish, dairy products and eggs. Unlike the other amino acids, only a minor BCAA fraction is metabolized by the liver after absorption in the gut. The largest part of dietary BCAAs appears in the blood circulation and can be utilized for new protein synthesis (1). Leucine has the most anabolic effect of BCAAs, which is mediated by activation of the mechanistic target of rapamycin complex 1 (mTORC1) (1,2).

The mTORC1 is a multi-protein complex, which regulates protein synthesis and cell growth through various downstream effectors (3). Recent evidence suggests, that BCAAs play multiple roles via this mTORC1 pathway and that a metabolic imbalance of these nutrients is associated with diabetes, cardiovascular diseases, obesity, cancer or mood disorders (4-7). High concentrations of BCAAs were shown to promote oxidative stress, inflammation and the migration of peripheral mononuclear blood cells through mTORC1 activation (8).

Certain studies suggested a possible link between BCAAs, mTORC1 and hematological parameters (9-11). Significant increases in hemoglobin (Hb), serum iron, red blood cell count and hematocrit were observed in a small cohort of 23 athletes after a 90-day administration of a BCAA-mixture (9). These data implicate, that BCAAs might also promote erythropoiesis and iron status improvement (9). Since the BCAAs are a limiting factor for protein synthesis and cell growth, a nutritional deficiency of them may also lead to lowered protein biosynthesis of haemoglobin and other indicators of iron metabolism. This could represent one possible pathophysiological link between BCAAs and human iron indicators. Many of these effects are mediated by the mTORC1 pathway (6), which may represent a possible link between BCAAs and human iron metabolism.

Currently, serum ferritin and transferrin saturation remain the widespread biomarkers of the human iron status in clinical practice. Both parameters are known to be affected by acute-phase reactions (12), whereas the soluble transferrin receptor (sTfR), which is inversely correlated with the human body’s iron stores, is not influenced by acute or chronic inflammatory illness (12-14). Despite the established associations between elevated serum BCAA levels and various diseases, little is known about possible interactions between BCAAs and iron metabolism. There is still a lack of study designs comprising biomarkers of human iron status and BCAAs in large study cohorts. Considering the central role of BCAAs in metabolic pathways, the hypothesis of this study was, that BCAAs may also interact with the human iron metabolism, which also represents an important part of strong health.

We present the following article in accordance with the Materials Design Analysis reporting checklist (available at http://dx.doi.org/10.21037/atm-20-624a).

The inclusion criteria were a minimum age of 15 years and an obligatory overnight fasting state of >12 h. Individuals with the unavailability of all study parameters and iron supplementation within the last 12 months were excluded from the study. The study was conducted in accordance with the Declaration of Helsinki (as revised in 2013). The study was approved by the Ethics Committee of the Johannes Kepler University Linz (Linz, Austria) (No. 1027/2019) and informed consent was taken from all patients.

Fasting blood samples were collected between 8.00 and 10.00 a.m. Hb (anemia: males, <13 g/dL; females, <12 g/dL) and erythrocyte indices (MCV and MCH) were determined on the ADVIA® 2120i Hematology Analyzer (Siemens Healthineers, Erlangen, Germany). Ferritin was assessed by chemiluminescent technology, serum iron by photometric method, and transferrin and the sTfR by nephelometric technology on a Dimension Vista® 1500 System (Siemens Healthineers, Erlangen, Germany). The percentage of transferrin saturation was calculated based on the formula: transferrin saturation (%) = serum iron (µg/dL) × 70.9/transferrin (mg/dL). The reference ranges of the study parameters are listed in Table 1. Iron deficiency was defined as a serum ferritin level <30 µg/L and/or a transferrin saturation <20% (12,14,15). 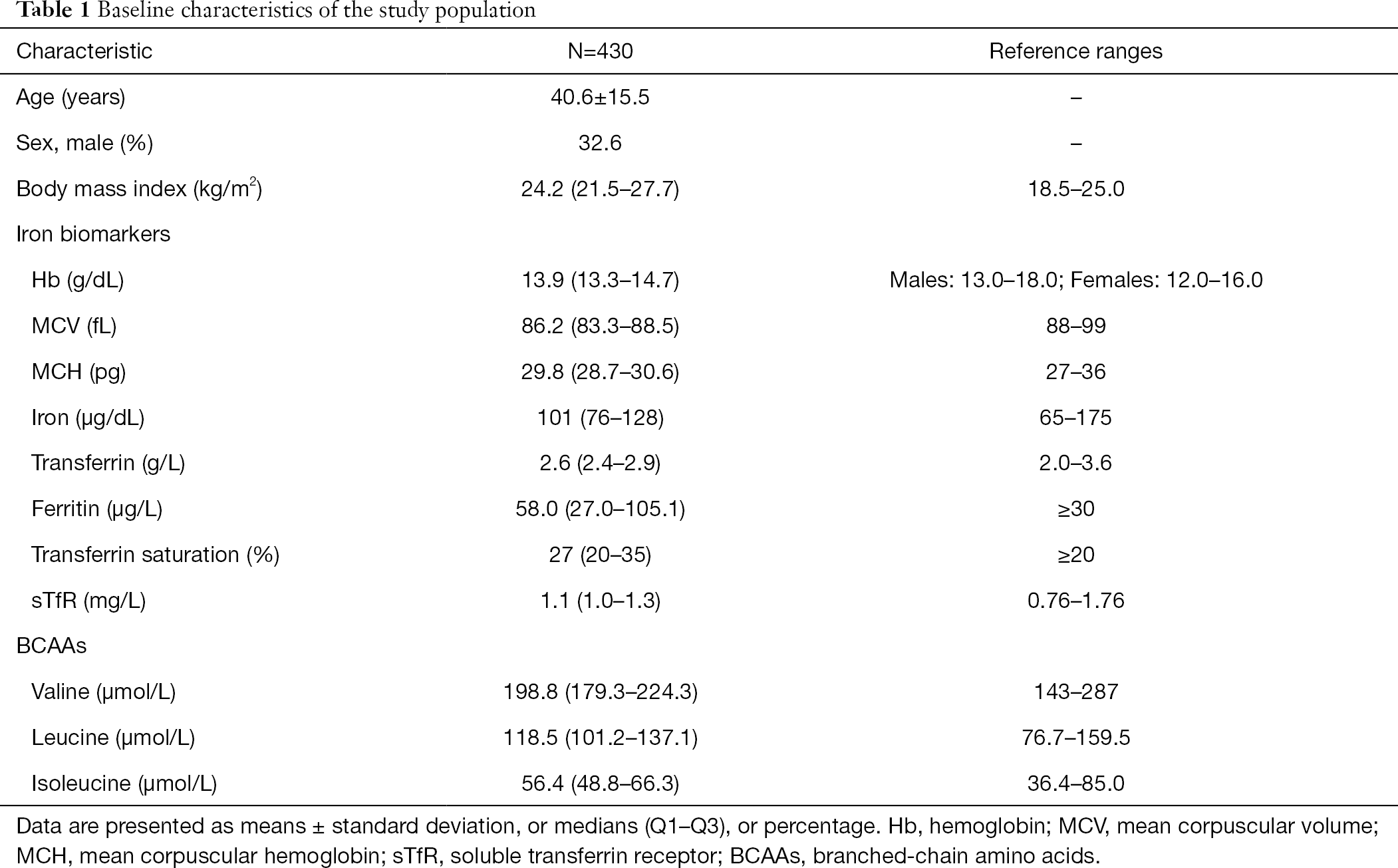 Serum concentrations of the BCAAs valine, leucine and isoleucine were measured by previously described chromatographic methods (5,16). Briefly, after precipitation of serum with perchloric acid following neutralization of the supernatant with sodium carbonate, the extracted amino acids were derivatized with o-phtalaldehyde and separated on a reversed phase column with gradient elution. Quantification was performed with ratios of fluorescence signals of the interesting amino acids to the internal standard norvaline in comparison to the appropriated calibration curves. Intra- and inter-assay correlation coefficients were all <10%. The reference ranges of BCAAs were calculated according to the literature (17).

Sample size estimation was performed according to the literature (18). A sample size of approximately 400 individuals was assessed to obtain insights about potential associations between BCAAs and indicators of iron metabolism.

The distribution of the data was calculated with the Kolmogorov-Smirnov test. Not normally distributed continuous variables were presented as medians with interquartile ranges (Q1–Q3). Categorical variables were expressed as percentages. To evaluate potential correlation between two continuous variables the Spearman’s rank correlation coefficient (r) was used. Furthermore, linear regression models were performed to assess the association between variables. The Mann-Whitney U test was calculated for the comparison between two groups for not normally distributed continuous variables. A P value <0.05 was considered statistically significant. For statistical analysis, the Analyse-it® software version 4.92 (Analyse-it Software, Ltd., Leeds, United Kingdom) was used.

Correlations between BCAAs and parameters of iron metabolism

Associations of Hb, ferritin and sTfR with BCAAs

The univariate linear regression models for Hb, ferritin and sTfR are presented in Table 3. The BCAAs valine, leucine and isoleucine showed a statistically significant influence on Hb and ferritin (β-coefficients: 0.173–0.351; all P values <0.001). Valine and isoleucine were in tendency (β-coefficients: 0.084 and 0.093; P values: 0.055 and 0.083) associated with sTfR. Figure 1 demonstrates linear regression models between Hb, ferritin, sTfR and all three BCAAs (valine + leucine + isoleucine) taken together. 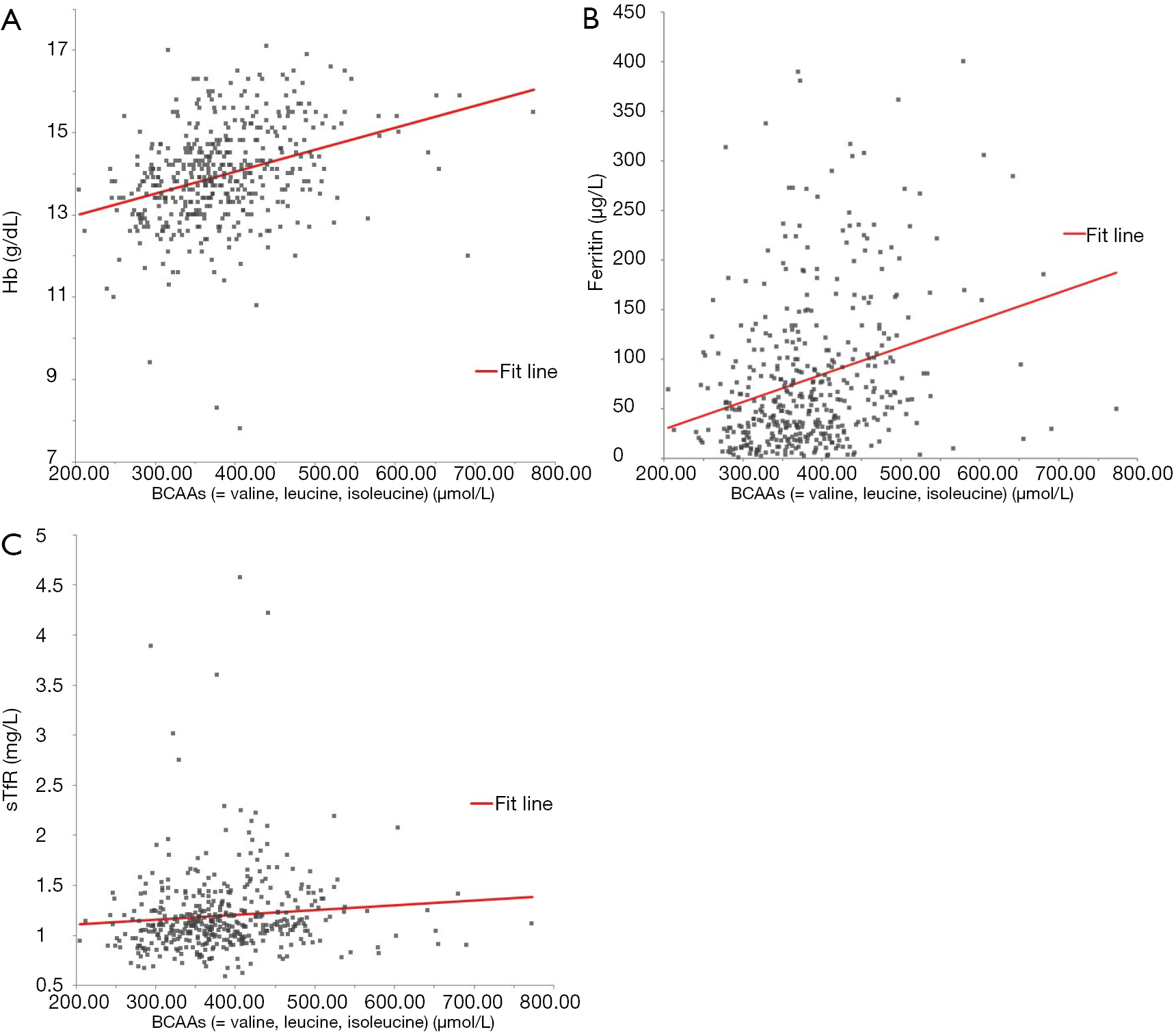 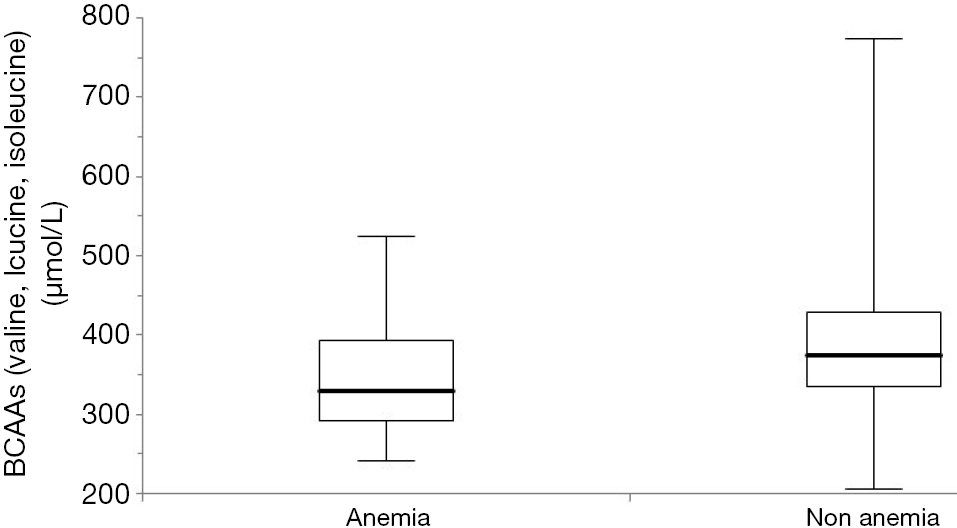 Figure 2 BCAAs (valine, leucine, isoleucine) and anemia. Box-and-whisker plot of BCAA serum level comparison between 17 anemic and 413 non-anemic individuals (P=0.046). The central boxes represent the 25th to 75th percentile range. The lines inside the boxes show the median value for each group. Minimum and maximum are indicated as whiskers with end caps. BCAAs, branched-chain amino acids.

In the current study, the three BCAAs valine, leucine and isoleucine were significantly correlated with Hb, ferritin and the sTfR. The linear regression models showed strongest associations between BCAAs and Hb. Lowered BCAA levels were found with lowered Hb values.

These findings are consistent with the results of a previous study by Chung et al., who demonstrated, that the uptake of the essential BCAAs is a very important component of Hb synthesis in hematopoietic stem cells (19). In this context, the mTORC1 was shown to be a key regulator in hematopoietic stem cell function (20). This multi-protein complex acts as an intracellular sensor of BCAA availability, which coordinates the Hb production (19,21).

In the present study, patients with anemia were found with significantly lower serum BCAA concentrations compared to individuals without anemia. Several recent studies demonstrated that treatment with the BCAA leucine improves the anemia of the Diamond-Blackfan and of the 5q-myelodysplastic syndrome (24-27). Haploinsufficiency of ribosomal proteins in hematopoietic stem cells is the proposed cause of the anemia observed in these disorders (24,28). Leucine activates the mTORC1 pathway, which may overcome the ribosomal protein deficiencies and rescue the anemia (24,29). Recently, in elderly patients with myelodysplastic syndrome, oral leucine administration was shown to increase the absolute reticulocyte count, which is an indicator of hematopoietic functionality (30).

Present data show, that the valine, leucine and isoleucine blood levels significantly correlated with the iron storage protein ferritin. Lowered BCAA levels were found with lowered ferritin values. In a previous published study, it was shown that apoferritin, which is the hollow shell protein component of ferritin, contains amino acid residues of all three BCAAs (31). Little correlation was also observed between sTfR and BCAAs. Previous determination of the nucleotide sequence of human sTfR showed that the amino acid sequence of this iron biomarker comprises all three BCAAs (32).

Valine, leucine and isoleucine are cellular nutrients, which are essential for the synthesis of human structural and functional proteins. A previous report demonstrated an increasement of Hb, ferritin, red blood cell count and hematocrit in training athletes after daily consumption of an amino acid mixture, which encompassed all three BCAAs (33). Intermediaries of BCAA metabolism are also known to induce fetal Hb during definitive erythropoiesis (34).

The impact of BCAAs on erythropoiesis and iron metabolism should be investigated in further longitudinal studies, which are able to clarify the exact pathophysiological mechanisms of this observed link. The major advance of the present study is that the BCAAs and iron biomarkers were measured in a well characterized large study cohort.

The major limitation of this cross-sectional study is that lifestyle factors and dietary habits were not considered.

Significant associations between the BCAAs valine, leucine, and isoleucine and the iron biomarkers Hb and ferritin were observed. Patients with anemia showed significantly lower serum BCAA levels compared to individuals without anemia. Lowered BCAA concentrations were found with lowered ferritin levels. These findings suggest a pathophysiological link between BCAA and iron metabolism.

Reporting Checklist: The authors have completed the MDAR reporting checklist. Available at http://dx.doi.org/10.21037/atm-20-624a

Conflicts of Interest: All authors have completed the ICMJE uniform disclosure form (Available at http://dx.doi.org/10.21037/atm-20-624a). The authors have no conflicts of interest to declare.

Ethical Statement: The authors are accountable for all aspects of the work in ensuring that questions related to the accuracy or integrity of any part of the work are appropriately investigated and resolved. The study was conducted in accordance with the Declaration of Helsinki (as revised in 2013). The study was approved by the Ethics Committee of the Johannes Kepler University Linz (Linz, Austria) (No. 1027/2019) and informed consent was taken from all patients. This study can provide new insights in the pathophysiological link between BCAAs and iron metabolism.