Intrahepatic cholestasis of pregnancy (ICP) is a pregnancy-specific liver disease (1) that is characterized by pruritus, elevated total bile acids (TBAs), and abnormal liver function tests—usually presenting in the second or third trimester. The pathogenesis of ICP remains poorly understood and may be associated with genetic, hormonal, immunologic and/or environmental factors (2-4). The prevalence of ICP seems to vary significantly among different ethnic and geographic populations, with a reported incidence ranging from 0.1% to 15.6% (5,6). For example, the incidence of ICP is 1−4% in the Yangtze River region, while the incidence in Chongqing and Chengdu is greater than 5% (7). There is currently no international consensus regarding the diagnosis and treatment of ICP, and inconsistent data in the literature have led to varied practices in the management of ICP.

We present the following article in accordance with the STROBE reporting checklist (available at http://dx.doi.org/10.21037/atm-20-4879).

We conducted a retrospective cohort study in which women diagnosed with ICP were compared with respect to all other deliveries during the study period. The incidences of GDM, preeclampsia, and adverse perinatal outcomes in each group were subsequently compared.

Our study was performed in compliance with the Declaration of Helsinki (as revised in 2013). Our study method was approved by the Peking Union Medical College Hospital Review Board (reference number: JS-1151). The need for written informed consent was waived because of the retrospective nature of the study, and the dataset was deidentiﬁed in order to protect patient privacy.

This study was conducted at 14 representative hospitals in 10 provinces from 4 major economic zones in China (including 2 secondary and 12 tertiary hospitals, 7 general hospitals, and 7 women’s and children's hospitals) between October 1, 2016 and September 30, 2017. Specially assigned individuals at each hospital were responsible for collecting and reporting information through an Internet-based system using a data collection system encompassing pregnant women who delivered. All deliveries in the hospitals after 20 weeks of gestation with a diagnosis of ICP were included in the study group, and ICP was diagnosed according to the 2015 guidelines of the Chinese Medical Association of Obstetrics and Gynecology (17). The diagnosis of ICP was based on pruritus without itching skin disease, elevated liver enzymes, and elevated levels of maternal serum TBA (≥10 µmol/L). All pregnancies that were complicated by severe congenital malformations such as chromosomal abnormalities and/or multiple congenital anomalies, all twin and higher multiple pregnancies, and cases with missing data were excluded from the study. The control groups consisted of all other pregnancies without ICP delivered at the aforementioned hospitals over the same time-period. We chose eligible cases to input into the data collection system and exported them from the central database system. In order to protect the privacy of patients, personal identifying information for all cases was removed during analysis. This study was approved by the Peking Union Medical College Hospital Review Board (reference number: JS-1151), which waived informed consent.

The primary outcome of this study was the incidence of GDM and preeclampsia among women with ICP. Secondary outcomes were the correlations between ICP and stillbirth, gestational age at birth, birthweight, induction of labor, mode of delivery, presence of postpartum hemorrhage, preterm labor (iatrogenic and spontaneous), SGA, MSAF, 5-min Apgar score, NICU admission, and neonatal death.

We performed all of the statistical analyses using SPSS (version 25.0, Chicago, IL, USA). Statistical significance was accepted at a P value <0.05. Continuous variables are presented as means ± standard deviations, and differences between groups were assessed using a Student’s t-test. Categorical variables are presented as counts and percentages, which were compared using Chi-squared or Fisher’s exact-probability tests. We compared baseline characteristics and maternal and neonatal outcomes for women with and without ICP. Logistic regression was used to determine the odds ratios (OR) and 95% CI of the adverse pregnancy outcomes among women with or without ICP, with the following confounders considered: maternal age, body mass index, parity, and chronic hypertension.

In our population, more than 99% of the women were of Han ethnicity, and only 2 pregnant women smoked. The primary maternal characteristics of the women with and without ICP are presented in Table 1. Maternal age and pre-pregnancy BMI did not differ between the groups. Women with ICP exhibited a higher proportion of conceptions with assisted reproduction (4.2% vs. 2.2%, P<0.001). 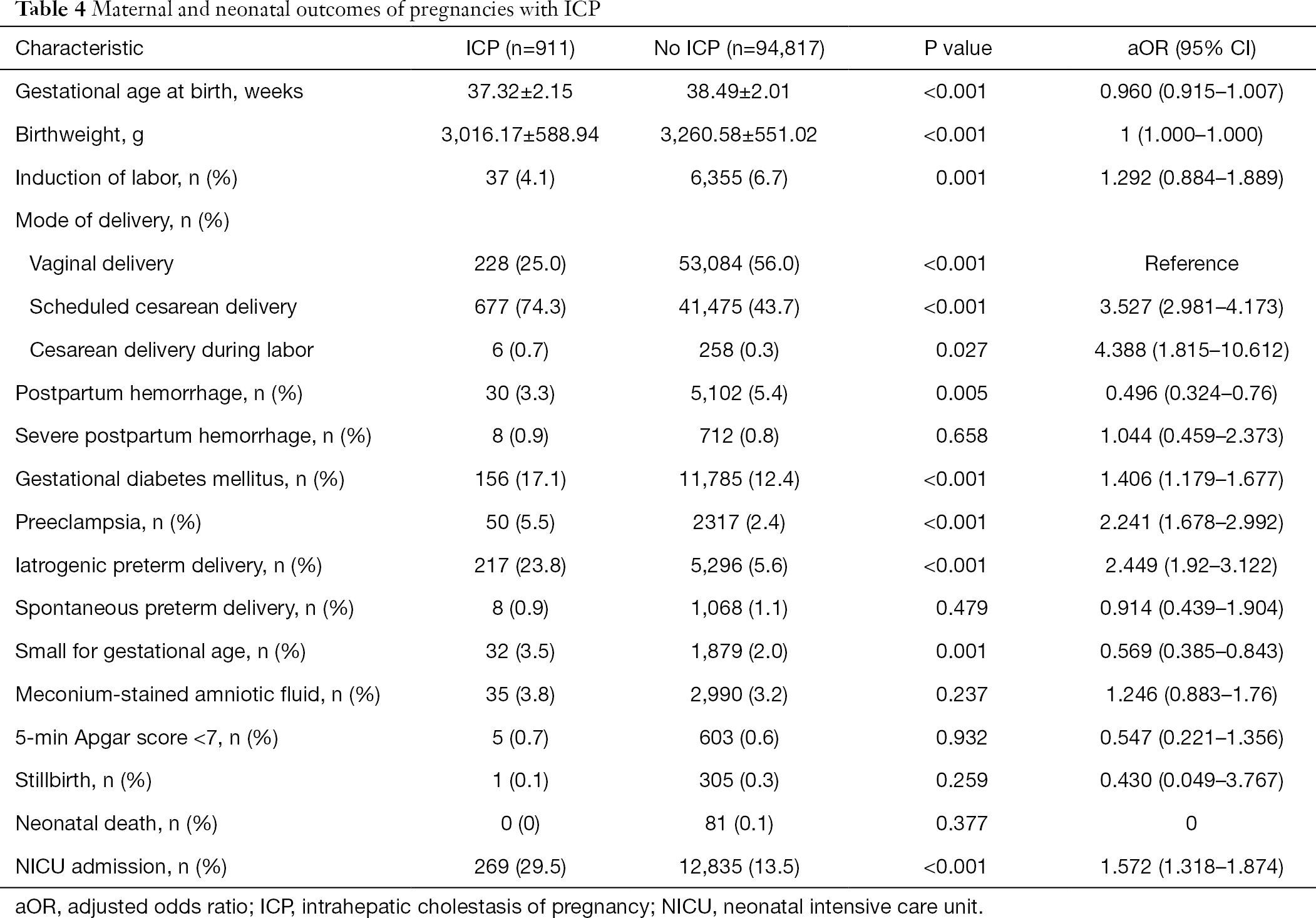 This retrospective study bears two main findings: i.e., that ICP demonstrates a strong association with GDM and preeclampsia (the prevalence of ICP in our population was 0.95%), and that women with ICP have significantly increased risks for adverse perinatal outcomes.

The mechanism(s) underlying the direct relation of ICP to GDM and preeclampsia remains unclear. Martineau et al. (16) reported that ICP is characterized by glucose intolerance and dyslipidemia, consistent with metabolic syndrome. Women with ICP exhibited higher triglycerides, total cholesterol, and low-density lipoprotein cholesterol; and lower high-density lipoprotein cholesterol—and these indices were also associated with an increased risk for preeclampsia and GDM (22,23). Women with a higher BMI and whose metabolic pathways are disrupted may also have an increased risk for adverse outcomes of pregnancy (24,25). Our study also showed that the incidence of GDM and preeclampsia in overweight pregnant women with ICP was significantly increased.

Bile acid as a ligand—combined with farnesoid X receptor (FXR) and Takeda G protein-coupled receptor 5 (TGR5)—can broadly influence glucolipid metabolism (26,27). Activated FXR inhibits gluconeogenesis, augments insulin secretion, and enhances insulin sensitivity (28-30). Activated TGR5 activates and induces the secretion of glucagon-like peptide 1 (GLP-1) by intestinal endocrine cells, and GLP-1 can then promote insulin secretion (31). Bile acid can also directly stimulate TGR5 in islet cells to promote insulin release (32). Of note, the increase in sulfated progesterone metabolites in women with ICP may antagonize FXR (33). The significant increase of GDM among women with ICP may thus be due to the decrease in FXR and TGR5 activities, which could lead to aberrant bile acid homeostasis.

High bile acid levels have also been shown to cause vasoconstriction of the chorionic plate veins which leads to structural damage of the placenta, causing reduced oxygen (34). High bile acid levels can also cause impairment of the placental antioxidant system and oxidative damage, inducing an increase in the number of placental syncytial knots (35,36); and increased numbers of syncytial knots have been reported in the placenta of pregnancies complicated by preeclampsia (36). Bile acids also contribute to endothelial damage in the kidneys and lungs through the production and release of reactive oxygen species, which can lead to oxidative stress. Oxidative stress can then promote the formation of a variety of vasoactive mediators, including endoglin-1, soluble fms-like tyrosine kinase receptor (sFlt-1), and others (37). Previous studies showed that endoglin and sFlt-1 were also increased in preeclampsia (38,39).

We observed a significant correlation between ICP and adverse perinatal outcomes, and investigators previously reported that ICP was associated with an increased risk of stillbirth (8,40). ICP is characterized by fetal death without any overt cause, but because there is currently no specific way to monitor the fetus, it is therefore often terminated in advance to avoid adverse pregnancy outcomes. With effective management during pregnancy, there was no increase in the incidence of stillbirth in our study—consistent with previously published studies (9,15). However, the rates of cesarean section, iatrogenic premature delivery, and NICU admission increased significantly. Although optimal delivery timing with respect to ICP is challenging given the paucity of high-quality studies, the Royal College of Obstetrics and Gynecology does not recommend active management (41). Recently, a meta-analysis showed that the risk of stillbirth was increased in women with ICP when serum bile acid concentrations were 100 µmol/L or more (42), but bile acid was not always a reliable monitoring index (43). The current study was not able to evaluate the levels of serum bile acids. We recommend that clinicians bolster their monitoring of bile acid levels, and make an individualized judgment as to whether the risks of preterm labor outweigh the risks of disease.

Our study had a lower frequency of PPH compared with other studies. Marathe et al. defined PPH as a blood loss of more than 500 mL in the 24 h after delivery, and the incidence of PPH was 30% in ICP patients. In our study, pregnancies had higher rates of cesarean deliveries in the ICP group, and we defined PPH as a blood loss of ≥1,000 mL after cesarean delivery within 24 h. Our study’s lower frequency of PPH might be explained by the different definitions used or by blood loss underestimations.

This study was a multicenter, retrospective cohort study with large samples of ICP patients, which indicates the prevalence and characteristics of ICP in the Chinese population. There were also some limitations. This was a retrospective study, which may raise some concerns regarding data quality; and regarding the risks of selection and information bias. We were not able to retrieve the specific indicators needed to assess disease severity or onset time, such as serum bile acid or transaminase levels. We were also unable to establish a relationship for onset time between ICP and GDM or ICP and preeclampsia, and could not evaluate a dose-dependent relationship between bile acid concentrations and the risk for GDM and preeclampsia.

This was a multicenter cohort study concerning women with ICP in China. Although a strong association was found between ICP and GDM as well as between ICP and preeclampsia, ICP did not increase the risk of stillbirth. It is thus necessary to further analyze the timeframe for any relationships between ICP and GDM or preeclampsia, and to better understand the potential mechanism(s) of any correlations. We need to strengthen the management and surveillance of women with ICP and control the weight of pregnant women in order to detect and treat preeclampsia as early as possible—thereby improving fetal outcomes and maternal prognosis.

Funding: This work was supported by the 13th Five-Year National Science and Technology Support Program (No. 2015BAI13B04) and the Chinese Academy of Medical Sciences (CAMS) Innovation Fund for Medical Science (CIFMS, No. 2017-I2M-3-007).

Reporting Checklist: The authors have completed the STROBE reporting checklist. Available at http://dx.doi.org/10.21037/atm-20-4879

Conflicts of Interest: All authors have completed the ICMJE uniform disclosure form (available at http://dx.doi.org/10.21037/atm-20-4879). The authors have no conflicts of interest to declare.

Ethical Statement: The authors are accountable for all aspects of the work in ensuring that questions related to the accuracy or integrity of any part of the work are appropriately investigated and resolved. Our study was performed in compliance with the Declaration of Helsinki (as revised in 2013). This study method was approved by the Peking Union Medical College Hospital Review Board (No. JS-1151). The need for written informed consent was waived because of the retrospective nature of the study, and the data set was deidentiﬁed in order to protect patient privacy.