Cubital tunnel syndrome (CuTS) is a common nerve compression disease in clinic and was first reported by Feindel and Stratford (1). Tinel’s sign and elbow test are useful in diagnosing CuTS, while electrophysiological examination can help to confirm the disease (2). Usually, the first dorsal interosseous muscle (FDI) is innervated by the deep branch of the ulnar nerve, which makes abnormal innervation challenging to detect. This difficulty is increased in CuTS patients, many of whom have atrophy. However, the anatomical variations in the FDI will manifest clinically. Anatomical variation of the FDI was first identified by Sunderland in 1946 (3), but in recent years, studies on this variation have been limited, especially studies that have employed electrophysiological techniques. Thus, this study aimed to investigate the incidence of this variation by using electrophysiological examination and to further evaluate the relevance of this variation in patients with CuTS.

We present the following article in accordance with the STROBE reporting checklist (available at http://dx.doi.org/10.21037/atm-20-1466).

The information of the patients who underwent a peripheral nerve surgery in the Department of Hand Surgery at Huashan Hospital, Fudan University, between October, 2012 to February, 2014 was collected. The inclusion criteria were as follows: aged 16–90 years old and diagnosed with single nerve injury in the upper extremity based on clinical symptoms and electromyography examination. Patients who were diagnosed as brachial plexus injury, thoracic outlet syndrome, cervical spondylopathy, peripheral neuritis were excluded. Gu’s standards which estimated the sense, motion, muscular atrophy, nerve conduction velocity of the patients was used to diagnose the carpal tunnel syndrome (CTS) and CuTS (4). The patients were divided into three groups: the CTS group, the CuTS group and the control group. The control group comprised patients without median nerve and ulnar nerve injury. The severity of CuTS was evaluated according to the systematic estimation grades introduced by Gu (Table 1) (4). Furthermore, according to the World Health Organization’s definition of an elderly person, the CuTS patients were divided into two groups: over 60 years old and under 60 years old.

During the surgery, the concentric needle electrode (CNE) was inserted into the FDI in the middle radial side of the metacarpus of the index finger, and the surface electrode (SE) was placed on the skin where the distance was 1 cm proximal to the palmar transverse crease of the wrist where the median nerve and the ulnar nerve passed (5). The skin temperature was maintained above 32 °C (6). The median and ulnar nerves were stimulated at an intensity of 4 mA and a frequency of 3 Hz. Then, we established whether we could record the compound muscle action potential (CMAP) in the FDI by the CNE or not. When the CMAP wave in the median nerve was larger than that in the ulnar nerve, and the latency of the CMAP in the median nerve was longer than that in the ulnar nerve, variable innervation of the FDI was recorded. 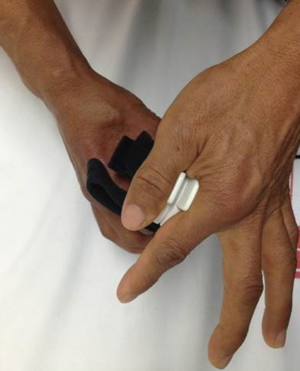 The study was conducted in accordance with the Declaration of Helsinki (as revised in 2013). The study was approved by the Ethics Committee of Huashan Hospital, Fudan University, Shanghai, China (No. 2018-416) and informed consent was taken from all the patients. 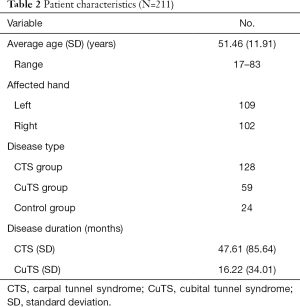 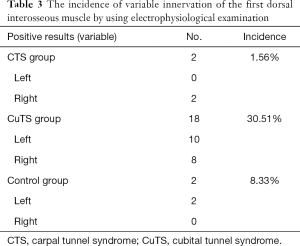 In the CuTS group, there was only 1 case of variation in the over-60-year-old group, but there were 17 cases of variation in the under-60-year-old group (Table 4). The CuTS patients under 60 years old were more likely to have this variant (P=0.043). Among the 18 patients whose FDI was innervated by the median nerve, 9 of 19 patients were diagnosed as moderate CuTS and 9 of 40 patients were diagnosed as severe CuTS. No significant relationship was identified between FDI variation and the severity of CuTS in this study (P=0.053). 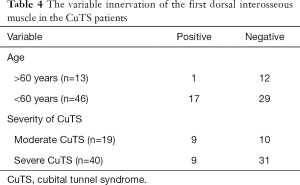 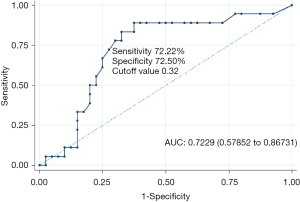 Figure 2 The receiver operating characteristic (ROC) curve for predicting the incidence of variable innervation of the first dorsal interosseous muscle. 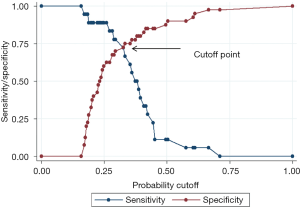 This study found that the variable innervation of the FDI was more common in patients with CuTS, especially those of a younger age. Meanwhile, this variation might lead to a better prognosis in CuTS patients.

Anastomosis between the median nerve and ulnar nerve is the most common anatomical variation. Anatomical and electrophysiological studies have shown that the innervation variations of intrinsic muscles were caused by the anastomosis in the forearm and hand (15,16). As the previous studies have proven, there are many anatomical variations in the population. Each of these variations has effects on vessels, organs, nervous system, and other parts of the body (17). In our electrophysiological study, the total percentage of CTS and the control group patients whose median nerve innervated the FDI was 2.63% (4/152 cases). This incidence was similar to those found in previous studies (3,8).

In this study, we found that variable innervation of the FDI was more common in the CuTS group (30.51%). In CuTS patients, the injury to the ulnar nerve could lead to the denervation of the FDI and muscular atrophy. As nerve tissues has the ability to regenerate (18,19), after the compensation by other nerves, the muscular atrophy could be improved to some degree as the muscular branches that grow from the median nerve reinnervate the FDI. Furthermore, histological studies have proven that skeletal muscles could be atrophied by denervation over time (20,21). Electrophysiological studies have shown that some nerve motor units are reborn after the loss of old units, which suggests that the reinnervation partly begins at the start of denervation (22). Okwueze discovered that in about quarter of the population, the FDI could also be innervated by the posterior interosseous nerve and the superficial branch of the radial nerve (23). Similarly, as previously mentioned, Sunderland (3) and Massey (8) found that the FDI could be innervated by the median nerve. Therefore, in CuTS patients, the variable innervation of the FDI by the median nerve could improve the muscular atrophy.

We also found that the percentage of younger patients with variation of the FDI is much higher than that of older patients. Previous studies have revealed that reinnervation and denervation in the motor unit is related to age. In older people, the reinnervated speed of the newborn nerve fiber is lesser than the speed of denervation (22,24,25). Thus, the reinnervation of the FDI by the median nerve after injury to the ulnar nerve may be more likely to occur in younger patients, thereby improving their muscular atrophy.

In clinic, the loss of function in the intrinsic muscle caused by CuTS may recover slowly or not at all (4). Loss of intrinsic muscle function could lead to severe loss of hand function, especially fine finger movement. The recovery of the intrinsic muscle has always been a significant problem affecting the prognosis of CuTS. As the literature shows, pinch strength can be used to evaluate the intrinsic muscle function and estimate the clinical outcomes of CuTS patients (26). Therefore, we also wanted to investigate whether the ratio of pinch strength in both hands between the thumb and index finger was different between patients with and without the variation. In our study, we found that the higher the ratio of the pinch strength in the thumb and index finger between the affected hand and the healthy hand, the higher the possibility that the first dorsal interosseous was innervated by the median nerve in CuTS patients. As Doherty’s study showed, reinnervation partly begins at the start of denervation (22), and the distance between the muscle and the nerve can be a factor that impacts the reinnervation speed (19). In this situation, the patients with the variation who had no injury to the median nerve that might have caused the pinch strength to recover quicker than in those patients who had no variation. The function of the intrinsic muscle might have recovered more quickly in the patients with the variation. This partly explains how the FDI variation might lead to a better prognosis for CuTS.

However, there are some limitations in our study. First, this study included a relatively limited number of cases within a short follow-up period. Further larger-scale studies are needed to validate our findings. Second, electrophysiological examination is based on the volume conduction effect. As the human body is considered to be a volume conductor, the errors caused by volume conduction in measuring the nerve conduction velocity should be acknowledged (27). Nevertheless, compared to anatomical surgery, electrophysiological examination is a convenient and minimally invasive way to detect variation.

In summary, through electrophysiological examination, our study showed that the median nerve could innervate the FDI. Variable innervation should be considered when the clinical manifestation in the FDI does not progress at a pace equal to the CuTS. After ulnar nerve injury, the FDI may become innervated by the median nerve. When this variation is present in CuTS, the patient’s prognosis may be better.

Funding: This study was sponsored by the Natural Science Foundation of China (grant No. 81501051 and 81572127). The funders had no role in the study design, data collection and analysis, decision to publish, or preparation of the manuscript.

Reporting Checklist: The authors have completed the STROBE reporting checklist. Available at http://dx.doi.org/10.21037/atm-20-1466

Conflicts of Interest: All authors have completed the ICMJE uniform disclosure form (available at http://dx.doi.org/10.21037/atm-20-1466). The authors have no conflicts of interest to declare.

Ethical Statement: The authors are accountable for all aspects of the work in ensuring that questions related to the accuracy or integrity of any part of the work are appropriately investigated and resolved. The study was conducted in accordance with the Declaration of Helsinki (as revised in 2013). The study was approved by the Ethics Committee of Huashan Hospital, Fudan University, Shanghai, China (No. 2018-416) and informed consent was taken from all the patients.