Prevalence and sex- and age-related risk of pulmonary embolism in in-hospital patients with atrial fibrillation: a multicenter retrospective study from China

Pulmonary embolism (PE) is a potentially life-threatening condition and generally thought to be related to the peripheral deep vein thrombosis (DVT) (1). However, DVT was not revealed in all PE patients by ultrasound or other imaging techniques. Therefore, other sources of thrombus were investigated, especially when the patients were complicated with conditions associated with clot formation, such as atrial fibrillation (AF) (2). The overlap of PE and AF was noted for decades with the common concept of stagnant blood flow in the right atrium (RA) during AF leading to thrombus formation in RA and subsequent PE (3).

Many factors were suggested to increase the risk of PE, such as heart failure, active malignancy, etc. A previous study showed higher incidence of PE in female and older patients (4) and these patients also had a higher risk of systematic embolism when complicated with AF (5). As the mechanism of systematic embolism and PE were similar in AF patients with thrombus arising from the left or right atria, we speculated that among AF patients, female and older patients might experience higher risk of PE as well. Thus, this study was designed to investigate the incidence of PE according to age and sex differences in an in-hospital AF cohort from China.

We present the following article in accordance with the STROBE reporting checklist (available at http://dx.doi.org/10.21037/atm-20-2718).

The study was conducted in accordance with the Declaration of Helsinki (as revised in 2013). The study was approved by clinical research ethics committee of our centers (NO.: TRECKY2020-097) and individual consent for this retrospective analysis was waived.

Patients’ diagnoses documented as the International Classification of Disease-10th edition (ICD-10) codes, including ICD 48 (I48xx1,I48xx02,I48xx03,I48xx04,I48xx05,I48xx06,I48xx07,I48xx08,I48xx09,I48xx10,I48xx11,I48xx12,I48xx13,I48xx14), were collected. The patients’ information was obtained from the database, including demographics (e.g., age, sex), comorbidities and discharge status. Data on echocardiography examinations was obtained as well and left atrial (LA) diameter was assessed in the present study.

Primary diagnoses were collected from records of outpatient visits or inpatient readmissions by searching health insurance numbers or case numbers after first discharges from the three hospitals until 2018.

Patients’ records with the diagnosis of PE were then obtained for more detailed information. The event of PE was confirmed if anticoagulation treatment was performed due to the diagnosis combining symptoms, clinical signs, D-dimer, blood gas test and objective examinations, such as pulmonary artery computed tomography angiography (CTA) and/or perfusion-ventilation (V/Q) lung scan.

Patients with the primary diagnoses of PE were subsequently identified whether PE was previously existed or new-onset. And the latter was further defined as prevalent PE if it occurred during the first hospitalizations and as incident PE if it occurred after discharges. Incident PE was considered as the termination event.

Continuous variables were expressed as mean ± SD and compared by unpaired Student’s t-tests. Categorical variables were expressed as number (percentage %) and compared using Chi-square tests. The prevalence of PE in the AF cohort was calculated while the incidence of PE was shown as number and person-year and expressed as the event rate. The differences between sex-specific and age-categorized PE incidence in AF were analyzed by Chi-square tests. Unadjusted and adjusted sex or age-related risk of incident PE were obtained by univariate and multivariate Cox regression with a stepwise method. Factors in the multivariate analysis included sex, age, AF type, hypertension, diabetes mellitus, dyslipidemia, heart failure history, baseline myocardial infarction, peripheral artery disease, DVT, anemia, chronic kidney disease (CKD) stage III-V, which was defined according to The National Kidney Foundation/Kidney Disease Outcome Quality Initiative (NKF/K-DOQI), stroke history and active malignancy. Kaplan-Meier analysis stratified by sex and age was then performed using log-rank analysis. P<0.05 was considered as statistical significance. All statistical analyses were performed with SPSS 23.0 software (SPSS Inc., Chicago, IL, USA).

Of the 15,688 AF patients (mean age: 72.56 years; 44.3% female), 260 had new-onset PE, including 182 prevalent PE and 85 incident PE (seven patients suffered both prevalent and incident PE). Among patients with PE, 130 were diagnosed by V/Q lung scan and 117 by pulmonary artery CTA. Diagnoses of the other 18 were made by combined V/Q lung scan and pulmonary artery CTA. Two of the patients were diagnosed by combining suspected symptoms, increased D-dimer and abnormal blood gas analysis. Table 1 showed the baseline characteristics of the included patients. Patients with new-onset PE were more likely to be older, female and had non-paroxysmal AF, CKD stage III-V, prior HF, prior stroke/TIA and chronic lung disease history compared to those without new-onset PE. 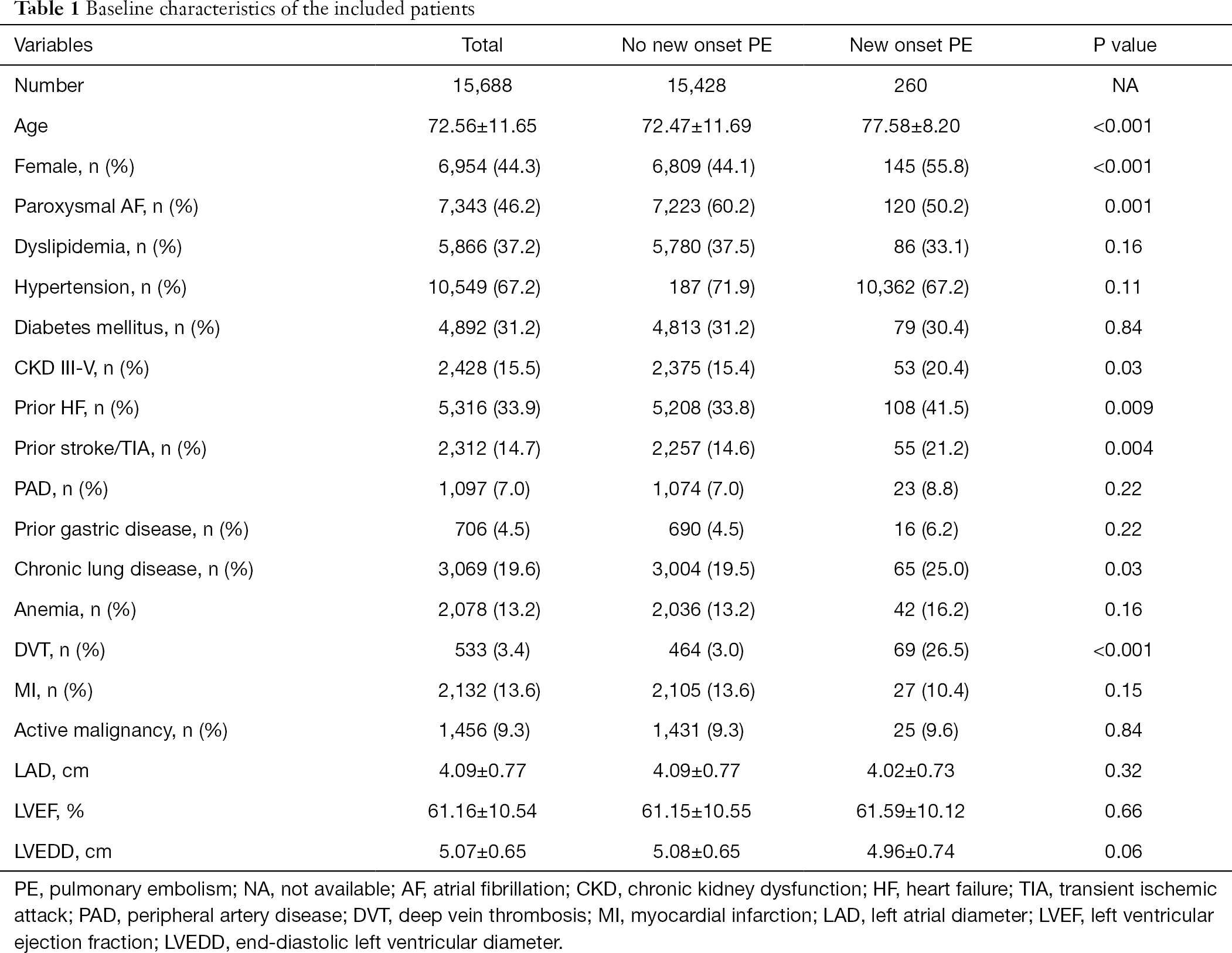 One hundred eighty-two patients (1.2%) had prevalent PE at their first hospitalizations in the three hospitals.

Eighty-five AF patients (0.24% per person-year) experienced incident PE during a follow-up of 2.28±2.43 years. Female patients were shown to have higher risk of PE than male patients in the unadjusted, age-adjusted, and multivariate Cox regression analyses (all P<0.05) (Table 2). 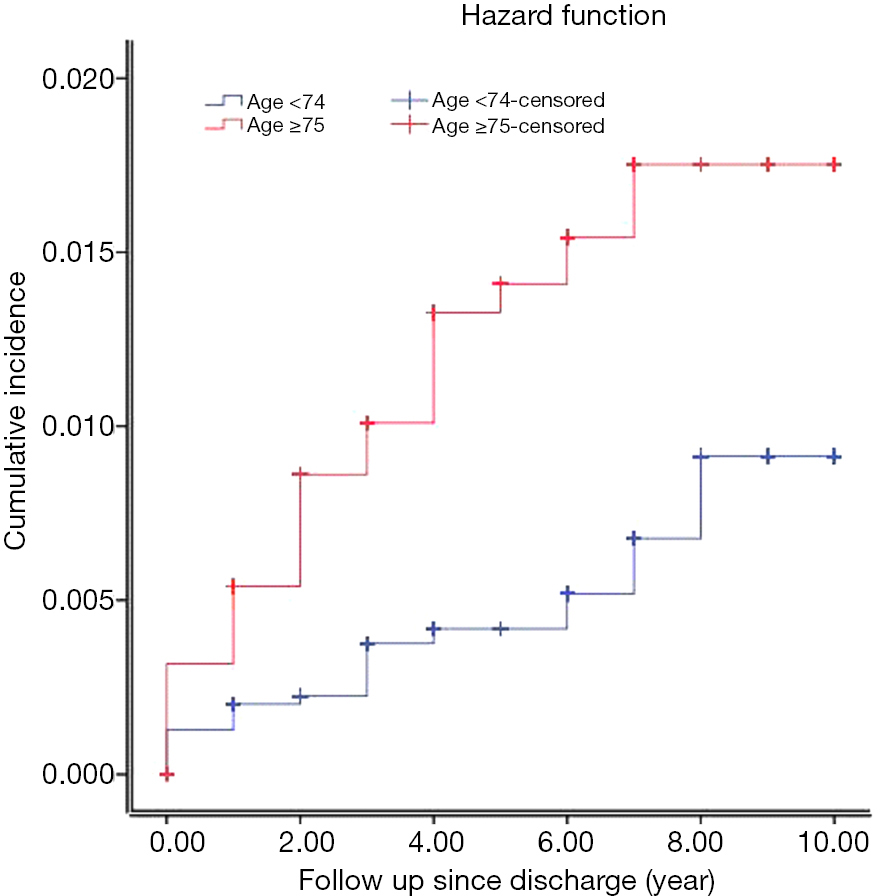 Prevalence of PE in AF

To our knowledge, this is the first report about the incidence of PE in AF patients in China. Keller et al. (6) found a prevalence of 0.12% of PE in AF patients in Germany, lower than the current report (1.2%). One possible explanation was the overlap in antithrombotic therapy for PE and AF and better antithrombotic treatment would be beneficial for PE prevention in AF patients (7). Big gaps in anticoagulation still existed between European countries and China, though substantial improvement was seen in China in the recent years (8).

Incidence of PE in AF

AF was considered as one risk factor contributing to the incident PE in a previous study (9). Furthermore, AF had a negative impact on the risk of embolism, not only during the stay in hospital, but also in the extended follow-up (10). Recently, apart from the theory associated with the clot formation in RA, several papers debated whether AF increased the risk of VTE using cohorts from communities or hospitals. Some studies supported the association between AF and increased risk of VTE during extended follow-up (11,12). However, as the risk of DVT was independently increased by the concomitant presence of lower leg fractures, major surgeries and neoplasms, no association was found between AF and VTE formation in another study excluding these patients (13). In our report, the incidence of PE (2.4/1,000 person) was similar to the reports of Wang et al. (12) (1.5/1,000 person) and Basili et al. (13) (0.65/1,000 person), but lower than the report of Lutsey et al. (6.3/1,000 person-year) (11) when the whole in-hospital AF cohort was used for calculation.

Risk of PE in female with AF

Clot formation in RA was assumed to be one underlying mechanism of PE, similar to the cause of systematic embolism. Female was shown to have higher risk of systematic embolism and involved in the risk stratification score CHA2DS2-VASc score (5). As suspected, female was found to be associated with increased risk of PE in the current study. Stein et al. (4) showed higher risk of PE in women in the general population. The reported incidence of PE was 0.23% which was similar to our report. Actually, not just symptomatic PE but also silent PE would be included in the current study, as D-dimmer was routinely examined in our centers and then blood gas and imaging examinations (V/Q lung scan and/or pulmonary artery CTA) were performed if necessary. The relationship between sex and risk of PE was debated for decades. A previous study (14) argued that men had a higher risk while other studies (15,16) argued that the risk was comparable between men and women. In our study, the age-categorized analysis showed that none of the patients with age below 50 had PE. Therefore, women with age above 50 had higher risk of PE, consistent with the study by Stein et al. (4).

When the risk of PE was studied using age-categorized analysis, old age was shown to be related to an increased risk of PE. In the category of age less than 50 years old, no incident PE was found in the present study. Thus, we believed that more attention should be paid to female and older patients with AF in the clinical practice, not just for the anticoagulation treatment to prevent PE, but also for the definite diagnosis of PE at the time of suspected symptoms.

There are several limitations to be mentioned for this paper. First, patients usually neglected occult PE and wouldn’t see doctors, which might lead to an underestimation of the incidence of PE (17). Second, potential PE cases were derived from discharge diagnosis registry and clinical records from the three hospitals. Thus, patients with PE treated in other hospitals would have been missed. However, the possibility of missing new-onset PE was reduced to the maximum by checking the outpatient records for possible PE diagnosis, because most inhabitants in Beijing would seek medical advice nearby. Third, the underlying diseases of the included patients were complicated, including DVT, cardiac insufficiency, lung diseases, and dependent abilities which had the probability to lead to PE. Moreover, the relationship between PE and AF was hardly confirmed using the technique of the current study. Fourth, as known, some other fatal underlying diseases, such as aortic dissection and heart failure, might have similar changes in imaging examinations, which might lead to a confounded diagnosis and then the risk of over-estimation of PE.

In an in-hospital AF cohort from China, the prevalence of PE was 1.2%. During a mean follow-up of 2.28 years, the incidence of PE was 0.24% per person-year. Females and older patients were more likely to experience PE compared to male and younger patients with AF.

Reporting Checklist: The authors have completed the STROBE reporting checklist. Available at http://dx.doi.org/10.21037/atm-20-2718

Conflicts of Interest: All authors have completed the ICMJE uniform disclosure form (available at http://dx.doi.org/10.21037/atm-20-2718). The authors have no conflicts of interest to declare.

Ethical Statement: The authors are accountable for all aspects of the work in ensuring that questions related to the accuracy or integrity of any part of the work are appropriately investigated and resolved. The study was conducted in accordance with the Declaration of Helsinki (as revised in 2013). The study was approved by clinical research ethics committee of our centers (NO.: TRECKY2020-097) and individual consent for this retrospective analysis was waived.