Stereotactic ablative radiotherapy: aim for a cure of cancer

Stereotactic ablative radiotherapy (SABR) differs from conventional radiation in several ways (Figure 1). It delivers a high radiation dose to the target that can potentially eliminate cancer. It is typically used to treat smaller tumors that have been detected early. SABR is guided by a special imaging system such as computerized tomography or computed tomography (CT). The CT is built into the radiation treatment machine. Because CT scanning can accurately pinpoint a tumor, SABR is able to give higher doses of radiation directly to the tumor without damaging nearby critical normal structures. Higher treatment doses are given in a much shorter period of time typically three to five treatments over a period of 5 days whereas typical conventional radiation therapy is given 30 minutes a day for 6 weeks or more. 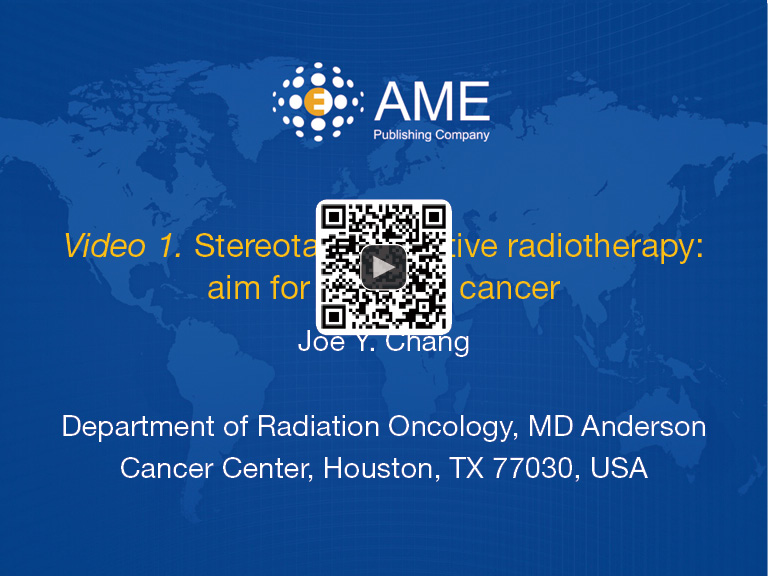 SABR can be used for early stage lung cancer (2-7), lung cancer that has returned, multiple primary lung cancer (5), early stage liver cancer, prostate cancer, and also other cancers that have recurred (8) and or spread. MD Anderson has treated thousands of patients with SABR for more than 10 years. For early stage cancer, SABR is a possible cure. Because SABR is more precise compared to conventional radiation therapy and the treatment area is smaller, most patients have very few side effects (7). Severe side effects are very rare.

The minimal side effects and shorter treatment time are just a few of the benefits. SABR has shown a very high tumor control rate with a significantly improved cure rate for nonsurgical patients who have early stage non-small cell lung cancer. In simple terms, SABR has been proven to be a very effective treatment.

Lung cancer can be difficult to treat because it is often discovered in later stages. In many cases, treatment is not very effective. The five-year survival rate for lung cancer is only 15%. MD Anderson wants to change these statistics. We have a lung cancer screening program for high risk patients. These are patients who are over 55 years of age and have been chronic smokers over one pack of cigarettes a day for 30 years. The goal is to find early stage lung tumors while they’re still small and curable. In some cases, individuals with cancer enter into a clinical trial for treatment. A clinical trial is a process to find a better way to treat a specific type of cancer. MD Anderson offers clinical trials that compare the success of SABR to other types of cancer treatment including but not limited to, those for lung cancer. Most patients treated with SABR are reaching high survival rates for early stage lung cancer. If early stage lung cancer could be identified sooner and treated with SABR, it’s possible that up to 70-80% of lung cancer could be cured. The result of SABR is comparable with surgical resection (2,6).