Intestinal microbes are critical for the normal development of the body and the maintenance of intestinal homeostasis. The composition and type of intestinal microbes vary among different diseases, thereby affecting the progression (and even malignancies) of those conditions. This has become an important area of research in recent years (7-9). Being an abdominal tumor, colorectal cancer mainly implicates the digestive tract. The composition and abundance of intestinal flora in patients with colorectal cancer differ substantially from those in healthy individuals, implying an important role of intestinal flora in tumor progression (10).

This study aims to identify the relationship between KRAS gene mutation and intestinal flora and to further elucidate the pathogenesis of colorectal cancer by analyzing the differences in the composition of intestinal microbes between wild-type and mutated KRAS colorectal cancer patients.

We present the following article in accordance with the MDAR reporting checklist (available at http://dx.doi.org/10.21037/atm-20-5622).

In the present study, cancer tissue specimens surgically removed from 177 colorectal cancer patients in our hospital were collected. Patients were diagnosed with colorectal cancer by hematoxylin and eosin (HE) staining and histopathological examination of cancer tissue at the Department of Pathology in our hospital. At the same time, the patients’ basic information and general conditions including name, age, sex, tumor stage, and metastasis were recorded. Also, the middle-posterior segments of fresh stools were collected from 30 of these patients and cryopreserved in liquid nitrogen for detecting intestinal flora. All patients were informed of this study and consented to participate in it, with the approval of the Ethics Committee in our hospital. The study was conducted in accordance with the Declaration of Helsinki (as revised in 2013).

The fresh colorectal cancer tissues surgically resected from the patients were taken, sheared into pieces using dissecting scissors, and then ground and stored in centrifugal tubes. Subsequently, 500 µL of lysis buffer, 50 µL of SDS, and 3 µL of protease K was added to the centrifugal tubes and shaken at 60 °C overnight. The next day, the centrifugal tubes were taken out and centrifuged at 7,500 rpm at room temperature for 15 min. After this, the supernatant was collected, and an equivalent volume of isopropanol was added and mixed evenly, and then transferred into spin columns. After centrifugation at 12,000 rpm for 15 min, washing buffer was added to the products and centrifuged at 12,000 rpm for 2 min. Subsequently, the spin columns were placed in new centrifuge tubes, then let to stand at room temperature for 8 min. Thereafter, Tris-EDTA (TE) buffer was added and centrifuged at 12,000 rpm for 1 min. The resulting solution was the DNA of the cancer tissues.

Middle-posterior segments of the stools of 30 colorectal cancer patients were sent to TinyGene Bio-Tech (Shanghai) Co., Ltd. for the detection of intestinal microbes. Following this, genomic DNAs in the microbes were extracted, amplified, and a DNA library was constructed and labeled. High-throughput sequencing was then performed using IlluminaMiSeq and Ion PGM to detect the type and relative abundance of microbes in the samples and the related bioinformatics analysis.

SPSS 22.0 was used for data statistics and analysis, and enumeration and measurement data were examined using the chi-square test and the t test, respectively. The survival analysis was performed using the Kaplan-Meier method, and the correlation was analyzed using the Pearson method. P<0.05 signified that the difference was statistically significant. 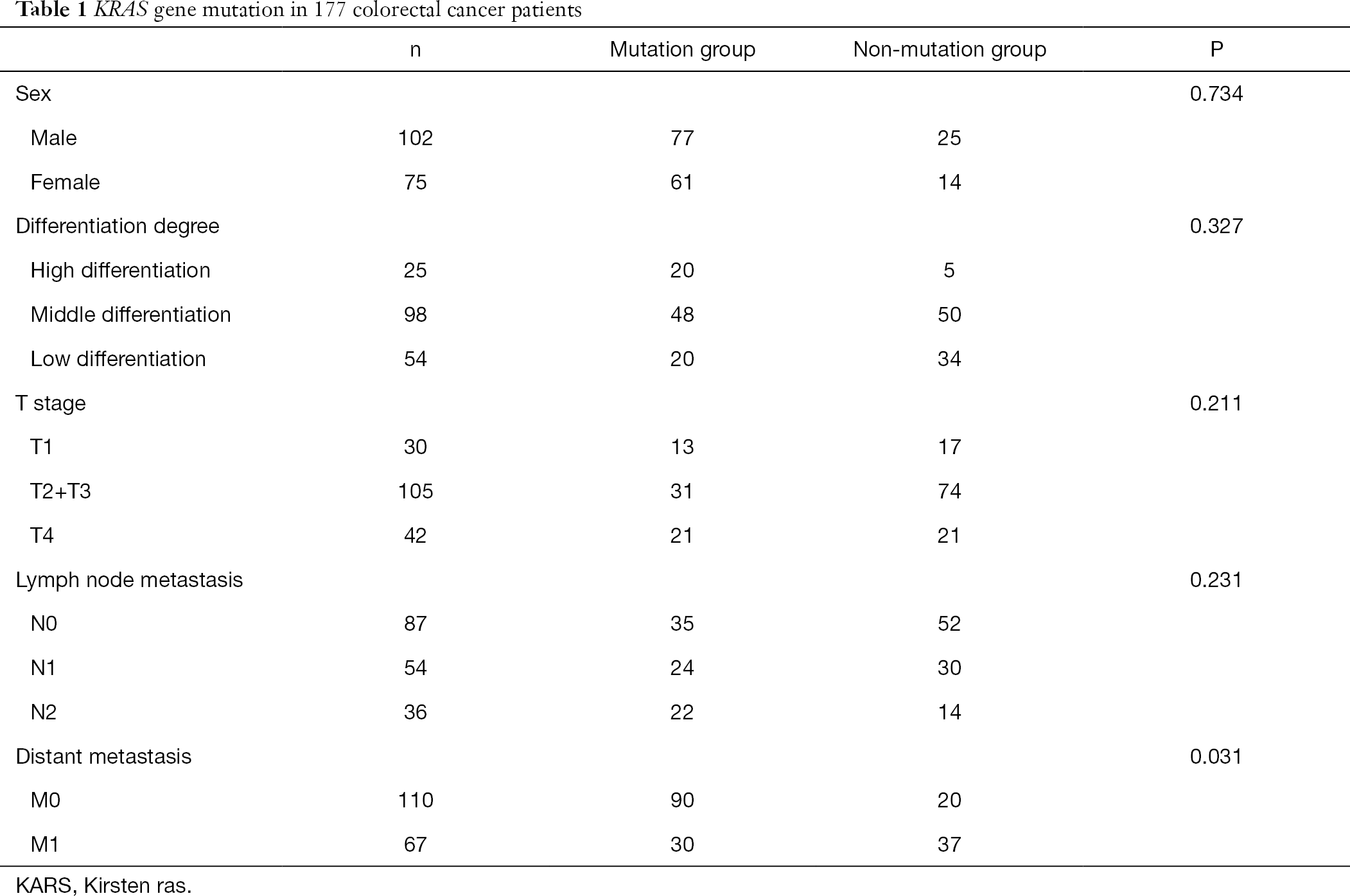 According to the survival analysis results (Figure 1), the mutation group had a poorer prognosis than the non-mutation group (P<0.001). In other words, colorectal cancer patients without KRAS gene mutation showed a better survival prognosis. 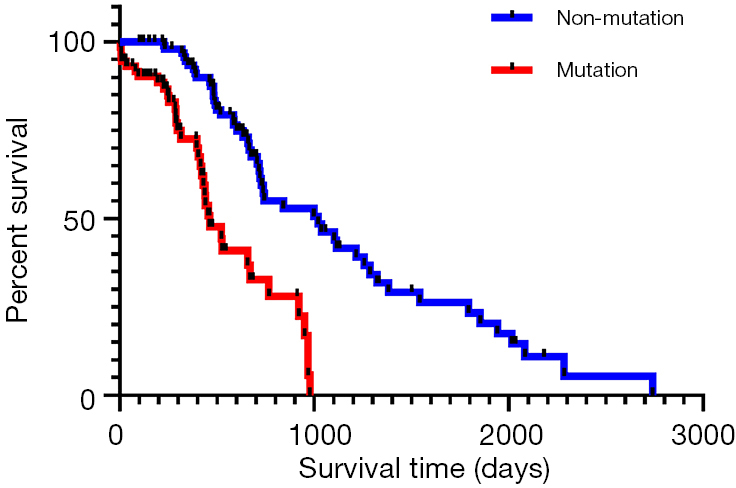 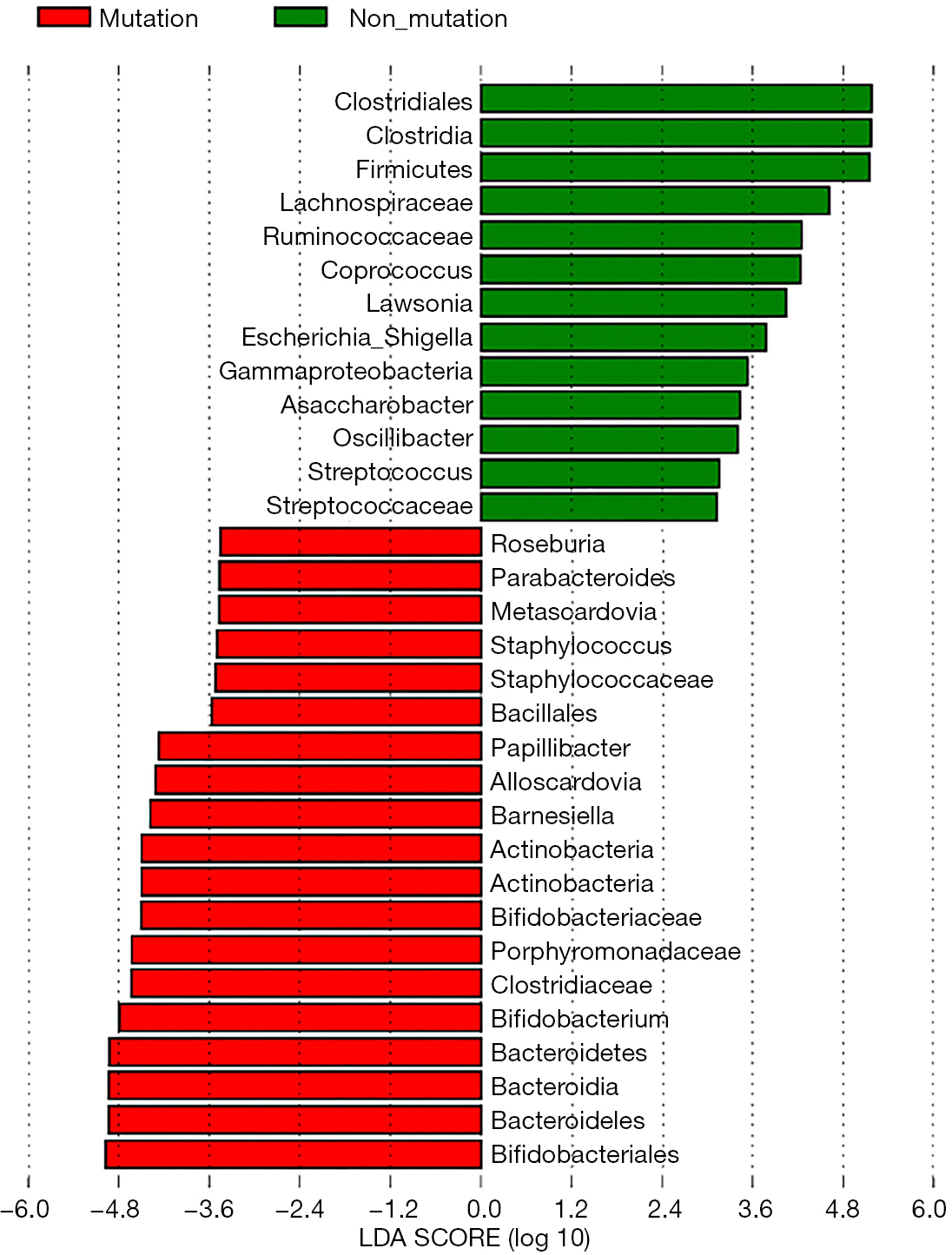 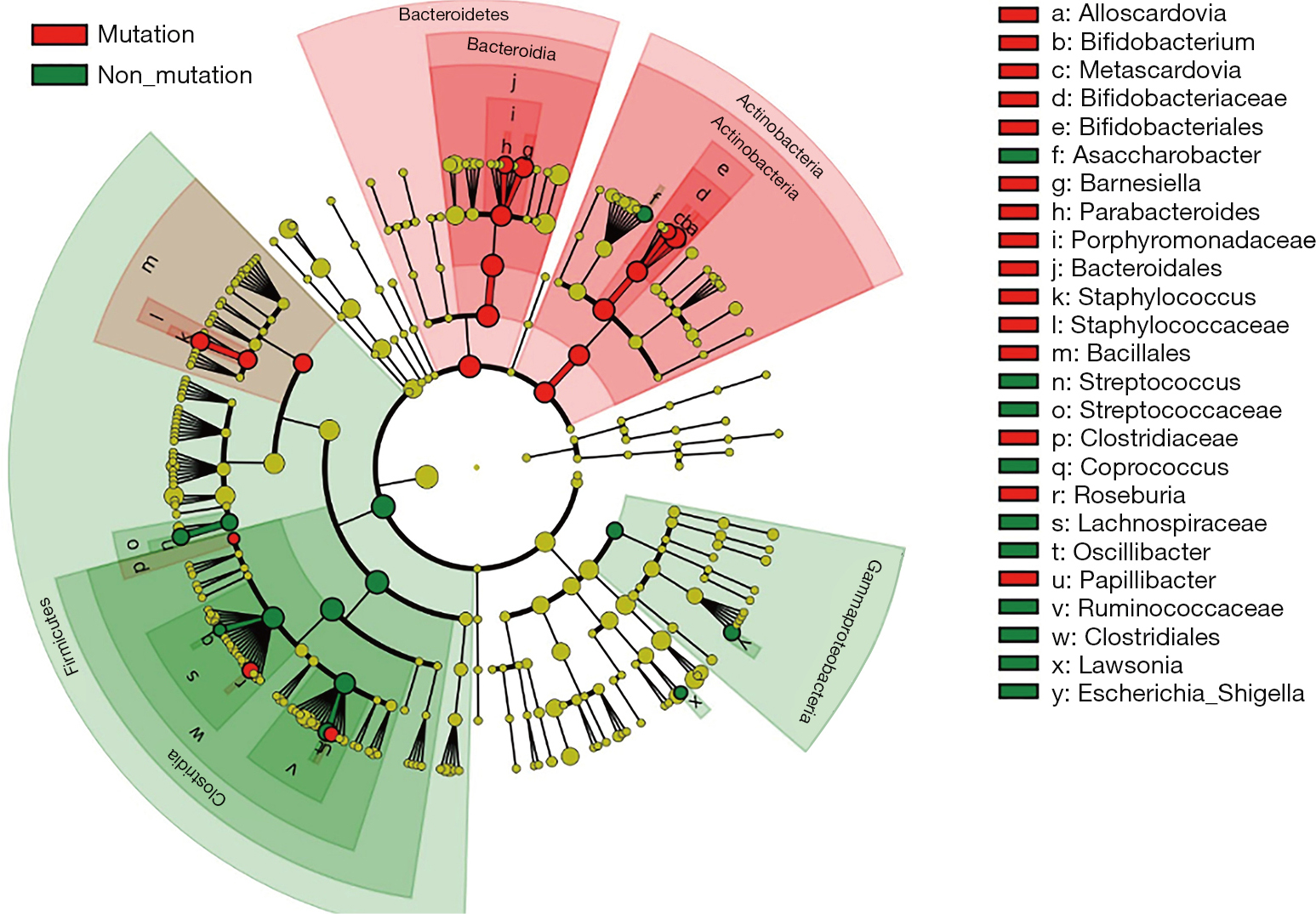 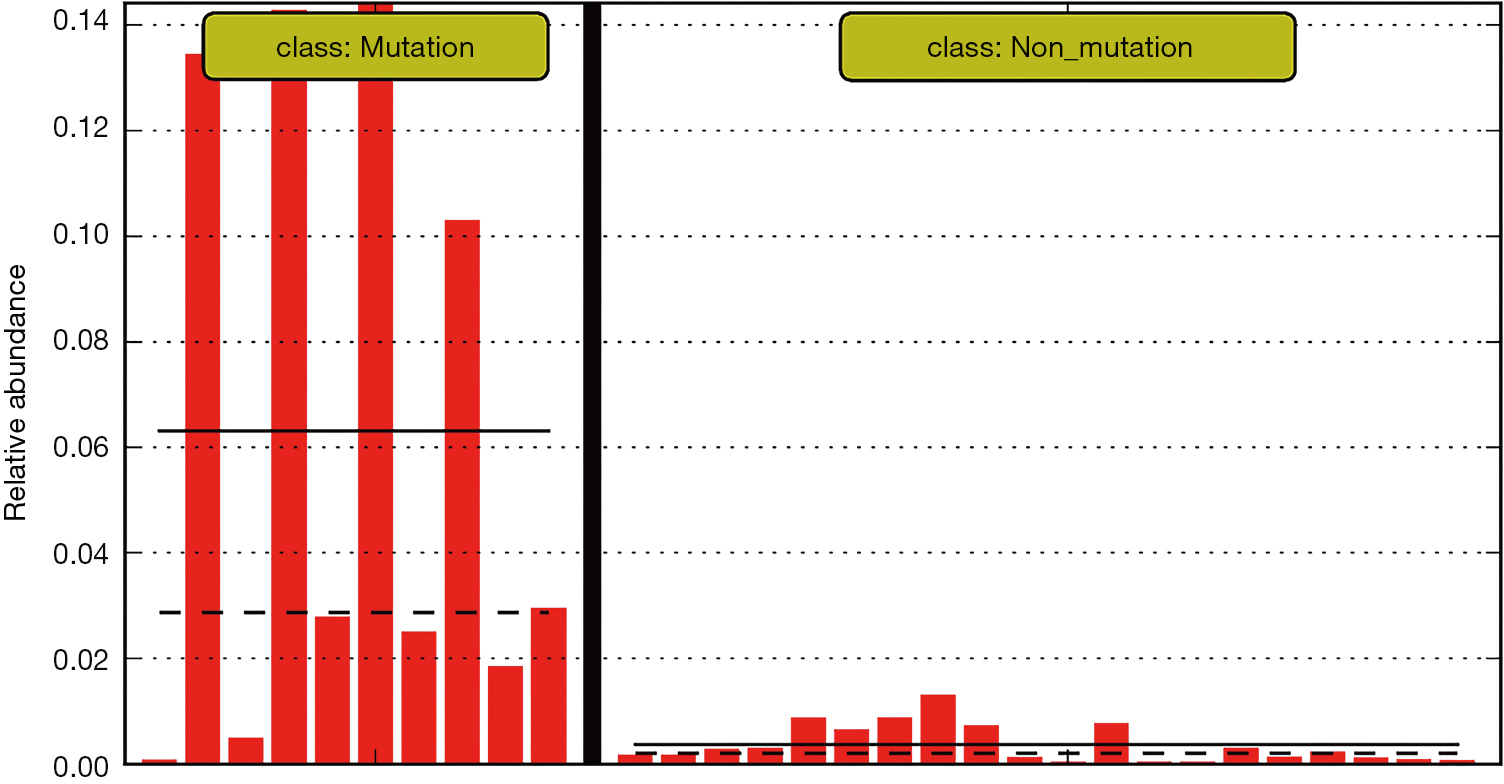 Figure 4 Level of intestinal Actinobacteria in mutation and non-mutation groups. 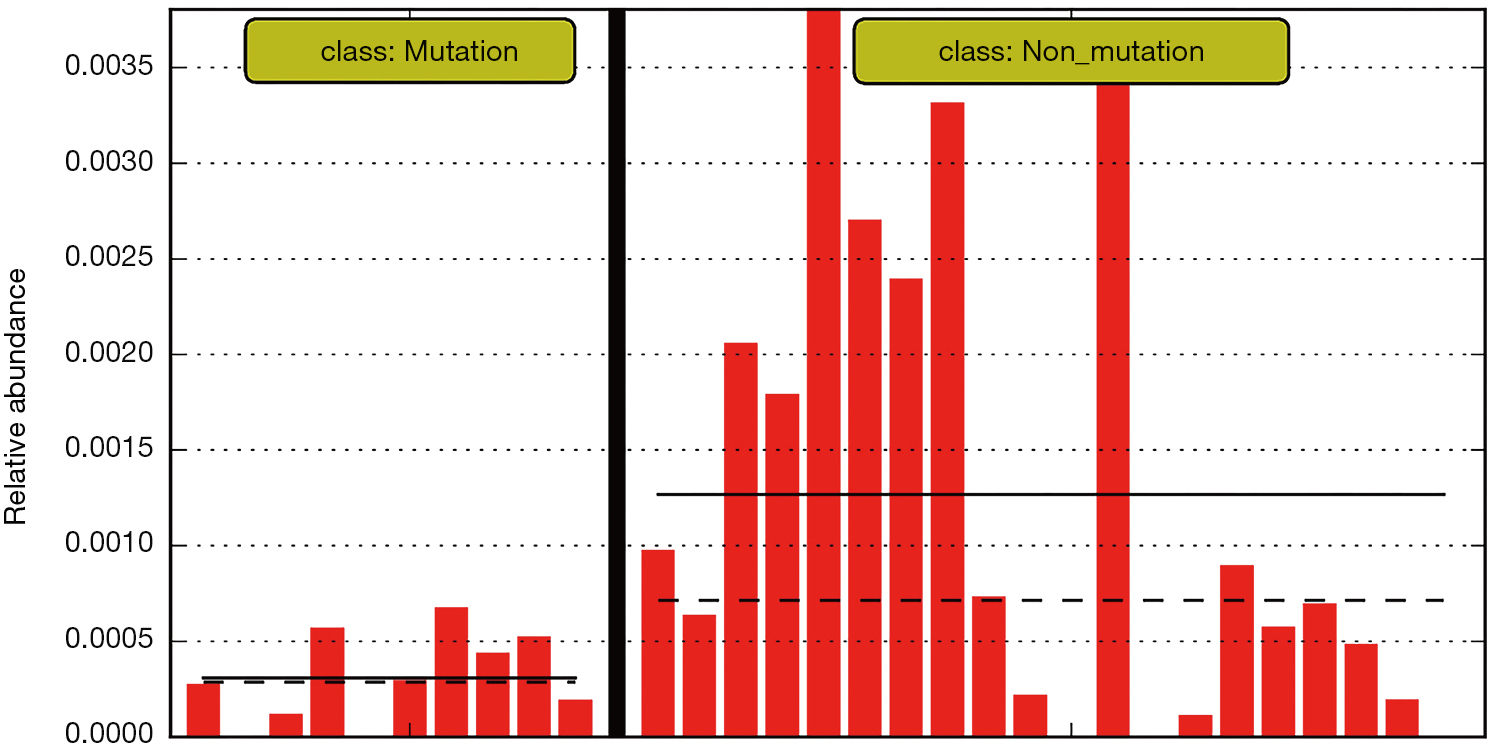 Figure 5 Level of intestinal Coriobacteriaceae in mutation and non-mutation groups. 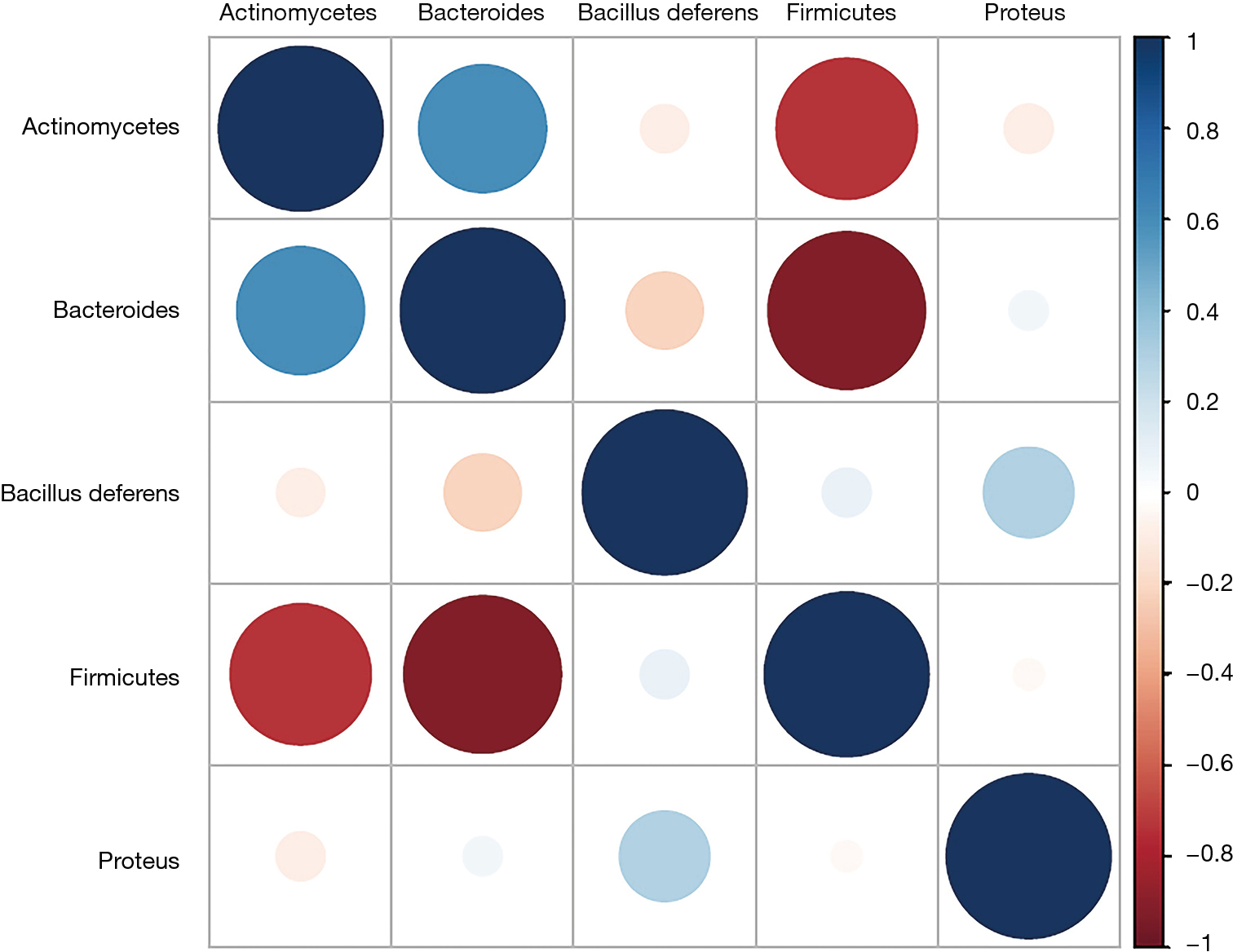 Colorectal cancer is one of the leading malignant tumors endangering the health of people worldwide. In China, the morbidity and mortality of this disease is increasing annually, and the rate of increase is accelerating. This may be associated with the dietary habits and irregular living arrangements of people.

One of the key features of colorectal cancer is that it is closely related to genetic factors such as gene mutation, gene polymorphism, and chromosome structure or functional variation. The KRAS gene, a crucial molecule in the major intracellular signaling pathways (such as the EGFR and the mitogen activated protein kinase/extracellular signal-regulated kinase (MAPK/ERK) signaling pathways), exerts substantial regulatory effects on multiple tumors. For example, its proteins can promote the growth (11) and metastasis (12,13) of most tumors and serve as the evaluation indexes for chemotherapy in pancreatic cancer (14). The KRAS gene has an elevated mutation rate in some tumors, which may regulate important signaling pathways and protein networks (15). Therefore, the incidence rate of KRAS gene mutation in colorectal cancer patients was studied by our research team, and a correlation between KRAS gene mutation and the distant metastasis of colorectal cancer was found (P=0.031). This suggests that KRAS gene mutation may be associated with the related mechanisms of the distant metastasis of tumors, such as epithelial-mesenchymal transition (EMT), though this remains an area of further study. According to the findings in this study, KRAS gene mutation also dramatically influenced the survival prognosis of colorectal cancer patients (P<0.01), which further supports the significance and the potential key regulatory role of the KRAS gene in this disease, and is consistent with reports in China and beyond.

In CRC, more than 35% patients showed KRAS mutation, and KRAS mutations often appear as single nucleotide variants (16). The most frequent mutation locations were within codon 12 and codon 13 in exon 2, and the most common patterns are G12D, G12A, G12R, G12C, G12S, G12V and G13D (17,18).When mutated, the intrinsic GTPase activity of KRAS would be disturbed, thus leading to the continuous of GTP-bound state and the accumulation of KRAS protein, which would then start the downstream pro-proliferative pathways (19).

The composition and abundance of intestinal microbes, which are important components in the digestive tracts of healthy individuals, have been reported to be associated with several diseases. They have thus become areas of major research in China and internationally in recent years (20,21). According to reports, intestinal flora affects the growth and metastasis of multiple tumors (22), including gastric cancer (23), colorectal cancer (24), breast cancer (25) and liver cancer (26). The present study linked KRAS gene mutation with intestinal flora in colorectal cancer for the first time, and identified differences in intestinal flora between mutation and non-mutation groups, indicating that some intestinal microbes with markedly different abundance may modulate the proliferation, invasion, and metastasis of tumors. Moreover, some microbes were reported in this study for the first time in China (and beyond), reflecting the innovative research involved and offering a reliable basis for future research.

This study found that the abundance of microbes, such as Roseburia, Parabacteroides, Metascardovia, Staphylococcus, and Bacillales in the mutation group was notably higher compared to the non-mutation group. The increase in the abundance of Staphylococcus in the mutation group might increase the risk of infection in colorectal cancer patients and enhance the decomposition of intestinal substances, causing more exotoxins to be released, and resulting in abdominal pain and diarrhea in patients. Once diffused into the bloodstream through the intestinal tract, Staphylococcal exotoxins will induce systemic infection and intoxication, and damage the immune system, thus aggravating the disease in patients and promoting the proliferation and metastasis of tumors. As such, the increase in staphylococcus in the intestinal tracts of colorectal cancer patients with KRAS gene mutation could strengthen the growth capacity of the tumor compared to the non-mutation group indirectly explaining why the proliferation and metastasis capacities of the tumor in the mutation group were stronger than those in the non-mutation group and the mechanism therein.

It is concluded that the prognosis of colorectal cancer patients is different between the mutation and non-mutation groups due to the differences in the composition and abundance of intestinal flora. Intestinal microbes affect the proliferation, invasion, and metastasis of tumors through the local immune system of the intestinal tract and the systemic immune system.

Reporting Checklist: The authors have completed the MDAR reporting checklist. Available at http://dx.doi.org/10.21037/atm-20-5622

Conflicts of Interest: All authors have completed the ICMJE uniform disclosure form (available at http://dx.doi.org/10.21037/atm-20-5622). The authors have no conflicts of interest to declare.

Ethical Statement: The authors are accountable for all aspects of the work in ensuring that questions related to the accuracy or integrity of any part of the work are appropriately investigated and resolved. All patients were informed of this study and consented to participate in it, with the approval of the Ethics Committee in our hospital (No. K2019 08). The study was conducted in accordance with the Declaration of Helsinki (as revised in 2013).