Half of the world’s population is infected with Helicobacter pylori (H. pylori) (1), and this gram-negative bacterium, which colonizes the gastric epithelium, is the major cause of gastric carcinogenesis and other gastric diseases, such as, chronic gastritis, gastroduodenal ulcers, and gastric mucosa-associated lymphoid tissue lymphoma (2). In fact, H. pylori was named a “definite biological carcinogen” by the World Health Organization in 1994 (3). The accurate detection of H. pylori is essential for managing infected patients and for eradicating the bacteria. Since the discovery of H. pylori, several diagnostic methods have been developed for the aim of accurate detection of this organism. These tests include noninvasive method—serology, urea breath test, or stool antigen test—and invasive methods, such as, culture, histological examination, and rapid urease test, which require upper gastrointestinal endoscopy to obtain gastric biopsy samples (4,5). Among these, histological examination is one of the most useful diagnostic tests for H. pylori infection (6). This article reviews the diagnosis of H. pylori by invasive testing that focuses on histology.

H. pylori, a spiral-shaped bacterium, can be seen in hematoxylin and eosin (H&E) staining and the sensitivity and specificity of H&E stain has been reported as 69-93% and 87-90%, respectively. However, the specificity can be improved 90-100% by using special stains such as modified Giemsa stain, Warthin-Starry silver stain, Genta stain, and immunohistochemical (IHC) stain (7,8).

H&E stain can directly identify H. pylori in a high-magnification field and evaluate the degree of inflammation (Figure 1A). However, when a low density of H. pylori and atrophic mucosal change are combined, it becomes difficult to see the organism. As Giemsa stain is easy to use, inexpensive, and provides consistent results; it is the preferred method in many laboratories (Figure 1B) (9,10). Warthin-Starry silver stain was crucial to the original demonstration of H. pylori, but it is expensive and the results are not always reliable (Figure 1C) (11). Genta stain has the advantage of visualizing both the inflammatory cells and H. pylori by combining silver, H&E, and Alcian blue stains (12). However, this is technically complex, expensive and time-consuming. IHC staining is also available and highly sensitive and reliable. IHC stain have a particular advantage in patients partially treated for H. pylori gastritis, a setting that can result in atypical (including coccoid) forms, which may mimic bacteria or cell debris on H&E preparations (Figure 1D). The major advantages of IHC stain include shorter screening time and high specificity because it can exclude other similar-shaped organisms (13). 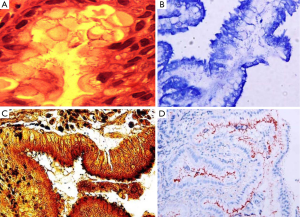 Laine et al. (7) compared these three stains (H&E, Giemsa, and Genta) and found the sensitivities were comparable at both low H. pylori density (H&E, 70%; Giemsa, 64%; Genta, 66%), and at high H. pylori density (H&E, 98%; Giemsa, 96%; Genta, 97%). Specificity was excellent (98-100%) for the Genta and Giemsa stains at both low and high H. pylori density and the H&E stain at a high density; however, specificity decreased (90%) in the H&E stain in low-density H. pylori. Ashton-Key et al. (14) also reported that IHC stain was a highly sensitive method for identifying H. pylori in gastric biopsy specimens—more sensitive than traditional stains (H&E, Giemsa, and Warthin-Starry silver) and considerably easier to interpret. However, although it would be ideal, it is not practical to perform H. pylori IHC staining on every gastric biopsy specimen.

In routine practice, if it is possible, at least two kinds of stain methods are recommended for diagnosis. H&E staining is usually adequate and Giemsa stain seems to have advantage over other stains because of its simplicity and consistency. Specialized IHC stains may be useful in followings: (I) no bacteria are visible on H&E or Giemsa staining, but there is evidence of inflammation on histology; (II) post-treatment biopsy specimens for mucosa-associated lymphoid tissue lymphoma to ensure eradication therapy has been successful; and (III) biopsy specimens in which coccoid forms or other organisms are not conclusively identifiable as H. pylori using routine stains (14).

Pros and cons of histologic method

Table 1 is a summary of previous reports regarding the advantages and disadvantages of each diagnostic method (2,15-17). The advantages of histology include its ability to document H. pylori infection and it also provided more information about the degree of inflammation and associated pathology, such as, atrophic gastritis (AG), intestinal metaplasia (IM), gastric cancer, or lymphoma (6). However, it has several limitations, including higher cost, longer turnaround time, and dependence on the skills of the operator (18). The density of H. pylori can vary at different sites, possibly leading to sampling error (19), and the sensitivity of histology may decrease in patients taking antisecretory therapy, such as, proton pump inhibitor (PPI). 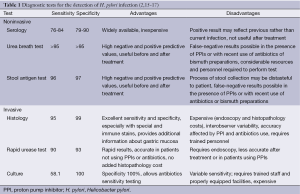 Another limitation of histology is interobserver variability in assessment (6,20-25). Previously, a study evaluated the reliability of H. pylori identification on H&E-stained gastric biopsy specimens by 20 pathologists; the results showed very poor sensitivity (66%) and suboptimal specificity (88%) (20). Another reliability study reviewing Warthin-Starry silver-stained slides showed that the kappa value for intraobserver agreement was 0.65-0.88 and interobserver agreement was 0.39-0.82 (23). Other studies on the reproducibility of histological data for Giemsa- or Genta-stained slides have reached a similar conclusion (24,25). This may be due to the discrepancies in feature evaluation of H. pylori or the pathologist’s observations, because pathology results are based on subjective interpretation of different features and classification (26).

Despite high histology sensitivity, the site, number, and size of biopsy specimen affect diagnostic accuracy. Although a single biopsy taken from the angulus of the stomach, in untreated H. pylori positive patients, can detect H. pylori presence in more than 90% of cases (19), diagnostic accuracy can be increased with multiple biopsies from the greater curvature and the corpus. The updated Sydney system (27) recommends that biopsy specimens be taken at five different sites for optimal assessment of both gastritis and H. pylori status. In this system, each specimen should be obtained from the lesser and greater curvature of the antrum, both within 2-3 cm from the pylorus; the lesser curvature of the corpus about 4 cm proximal to the angulus; the middle portion of the greater curvature of the corpus, approximately 8 cm from the cardia; and from incisura angularis (Figure 2). 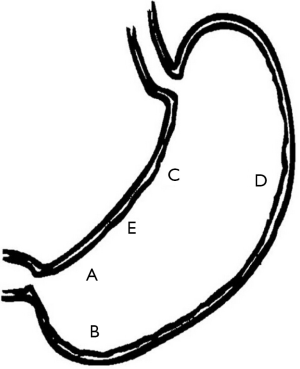 Peptic ulcer bleeding decreased the accuracy of H. pylori diagnostic test. A meta-analysis evaluating the histological sensitivity and specificity for the diagnosis of H. pylori infection in patients with upper gastrointestinal bleeding calculated a mean sensitivity of only 70% (28). However, in the presence of ulcer bleeding, histologic examination is the most reliable test. There have been studies indicating that histology was more sensitive than rapid urease test in diagnosing H. pylori infection in the peptic ulcer bleeding setting (29-31). Choi et al. (32) reported that peptic ulcer bleeding decreased the sensitivity of rapid urease test or culture, whereas, histology was found to be a quite reliable test, regardless of the presence of the bleeding. And serology showed relatively high sensitivity, but cannot be recommended as the first diagnostic method in bleeding situation, because of its low specificity. Choi et al. (32) also showed higher sensitivity than previous studies by using modified Giemsa stain rather than H&E stain and by obtaining many biopsy specimens.

When atrophic changes occur in the gastric mucosa, a high percentage of endoscopic biopsy samples become negative for a bacterial histology (33). Moreover, in metaplastic areas, H. pylori is undetectable by either conventional or special staining techniques in the majority of cases, despite serologic evidence of infection (34). The disappearance of H. pylori correlates with the development of IM and hypochlorhydria, which seem to be unfavorable environments for H. pylori colonization (35). In addition, the low prevalence of H. pylori in antral biopsy specimens of atrophic mucosa may be explained by a patchy distribution of the bacterial infection or a shift in colonization to the proximal stomach (corpus and fundus) resulting from hostile antral conditions including increasing pH where atrophy and IM occur more frequently (36,37).

The effect of AG and IM on H. pylori detection rates is quite different between the Campylobacter-like organism test (CLO test) and Giemsa stain method, depending on the stomach area biopsied (39). That is, CLO test positivity was markedly reduced when AG and IM were severe, but Giemsa stain was less affected by AG and IM, especially by AG, which is a less hostile environment than IM. These findings may be due to the different characteristics of the two tests. The CLO test depends on urease activity, the strongest enzyme in H. pylori, which makes the acidic gastric mucosal environment to neutral pH for survival of H. pylori (40) by use of Ure I channel in the internal plasma membrane (41,42). As a result, in AG or IM, which are less acidic conditions, the bacteria do not need to activate urease, thus reducing test sensitivity. In contrast, Giemsa staining is dependent on the morphology of H. pylori, and therefore it detects H. pylori presence regardless of activity, increasing the sensitivity of this test versus the CLO test (43,44). In addition, the body’s acid secretions, where parietal cells exist, may also be a reason for the higher sensitivity of Giemsa staining in spite of the presence of IM.

There may be reduced histology sensitivity and specificity in patients taking antisecretory drugs, such as H2-receptor antagonist (H2RA), PPIs, bismuth, and antibiotics. One study demonstrated that histological evaluation of an antrum biopsy had a sensitivity of 91% in 35 patients not taking an antisecretory drug, 91% in 34 patients on an H2RA, and 75% in 12 patients on a PPI. However, histology on biopsies taken from the corpus was more reliable, with a sensitivity of 83% in patients on a PPI, 91% in patients on an H2RA, and 94% in patients not taking an antisecretory drug (47,48). PPIs have strong antigastric secretion effects, in addition to being bacteriostatic against H. pylori. Thus, bacterial density may diminish, particularly in the antrum, but also in the body (18,49). For patients who receive PPI therapy, a better approach is to discontinue the PPI before endoscopic biopsy (50). The Maastricht IV/Florence Consensus Report for the management of H. pylori infection recommended that in patients treated with PPIs, if possible, the PPIs should be stopped 2 weeks before testing by histology, culture, rapid urease test, urea breath test, or stool antigen test (15). In addition, antibiotics also should be stopped 4 weeks before these tests (51). A false-negative result in histology is more controversial than other diagnostic methods because specialized pathologists have diagnosed H. pylori in the presence of surrogate features, such as, polymorphonuclear cells, even though the bacteria are absent (15). H2RA may also lead to false-negative results, but to a much lesser extent (52,53).

Histology is an excellent method for detecting H. pylori and provides additional information about gastric mucosa. H&E with or without Giemsa staining are usually adequate. The update Sydney system recommends gastric biopsies from five different sites; however, if this is not possible, the gastric body greater curvature may be a better site to detect current H. pylori infections, especially in the presence of peptic ulcer bleeding, AG and IM, or gastric cancer. PPIs can affect the result of histology and should be stopped 2 weeks before testing. Post biopsy bleeding may be increased in patients on anticoagulation therapy, so careful precautions should be taken.