Various local-ablative treatment options exist for primary and secondary liver cancer, such as radiofrequency ablation (RFA), microwave ablation (MWA) or transarterial chemoembolization (TACE) (1,2). While most of these methods are used for earlier stages of disease, transarterial radioembolization (TARE) with 90Y-loaded glass or resin microspheres is a treatment option especially for advanced liver disease. Several studies analyze the potential of TARE in different entities or disease stages. While recent studies showed no benefit of survival of first-line TARE added to chemotherapy for colorectal cancer metastasis (3) or of TARE added to Sorafenib for HCC treatment (4), TARE showed beneficial in advanced HCC, intrahepatic cholangiocarcinoma or colorectal cancer metastasis of distinct origin (5-8). Within these studies, TARE proofed to be a safe method with high rates of local disease control. However, toxicity with consecutive adverse events have been reported, including gastrointestinal ulcers, cytopenia, post-embolization syndrome (fatigue, fever, pain, nausea), a decrease in liver function or radioembolization-induced liver disease (REILD; ascites, hepatic insufficiency, jaundice) (7-11). Within this context, experience in outcome as well as toxicity of repeated TARE is limited especially in patients with multiple other therapies before presented to TARE (12-14).

We therefore aimed to evaluate the safety and outcome of repeated 90Y radioembolization for treatment of advanced liver cancer in a retrospective single-center cohort. We present the following article in accordance with the STROBE reporting checklist (available at http://dx.doi.org/10.21037/atm-20-2658).

The study was carried out as a retrospective single-center observational trial in a tertiary care academic medical center in Germany. The study was conducted in accordance with the Declaration of Helsinki (as revised in 2013). The study was approved by the local ethics committee of the Westfälische Wilhelms-University of Muenster, Germany (No.: 2018-638-f-S). Due to the retrospective character of this trial informed consent of patients was not obtained.

Patients with a repeated 90Y radioembolization (n=11), identified from all patients with TARE (n=288), in our center between 2009 to 2018 were assigned to the “repeated TARE” group. All patients undergoing TARE had approval of the interdisciplinary gastrointestinal tumor board. Diagnosis was based on the according European guidelines, respectively (15-19). Assignment to TARE (first as well as repeated TARE) was under premise of adequate hepatic function (Child-Pugh liver function grade A or B; ALT and AST ≤5× upper limit of normal (ULN); total bilirubin ≤1.5 ULN; albumin ≥29 g/L) as well as adequate hematologic, clotting and renal function tests. Moreover, hepatopulmonary shunt fraction had to be less than 20% and life expectancy was supposed to be more than 12 weeks.

In a second step patients identified from all other patients with a single TARE (n=277) by a propensity score matching considering sex, tumor entity, previous therapy, hepatic tumor burden and pre-therapeutic bilirubin were assigned to the “control group” (n=57).

The angiographic therapeutic procedures were solely performed by interventional radiologists who were approved within the quality assurance program of the microsphere provider in cooperation with nuclear medicine specialists responsible for the microsphere administration. Either a 90Y Bremsstrahl PET/CT or PET/MRI scan was performed following the procedures for documentation of the regional distribution of radioactivity within the liver.

All patient and procedural data including laboratory parameters as well as follow-up/survival data were retrospectively acquired from the electronic patient’s records as well as from the Picture Archiving and Communications System (PACS). Data collection and analysis was performed in 2019 and 2020. Tumor responses were based on comparative evaluation of pre- and post-treatment scans and evaluated by the Response Evaluation Criteria in Solid Tumors (RECIST), version 1.1, or in case of HCC by modified RECIST (mRECIST).

Data are shown as total number and percentage, mean and standard deviation or median and range or 95% confidence interval (CI), as appropriate. Kaplan-Meier analysis was performed to analyze survival, followed by log-rank test to compare the survival distributions of two groups. Case-control-matching was performed by propensity score-matching method with SPSS fuzzy extension. Propensity score-matching was performed via binary logistic regression to create a propensity score for each patient, entering the following variables: sex, tumor entity, previous therapy, hepatic tumor burden and pre-therapeutic bilirubin. Subsequently, a case-control match between the repeated TARE- and single TARE-group was obtained by use of the nearest-neighborhood-matching using a caliper width of 0.2 without replacement (20). A P value <0.05 was considered statistically significant. Statistical analysis was performed using the SPSS Statistics version 26 (SPSS Inc., Chicago, IL, USA). 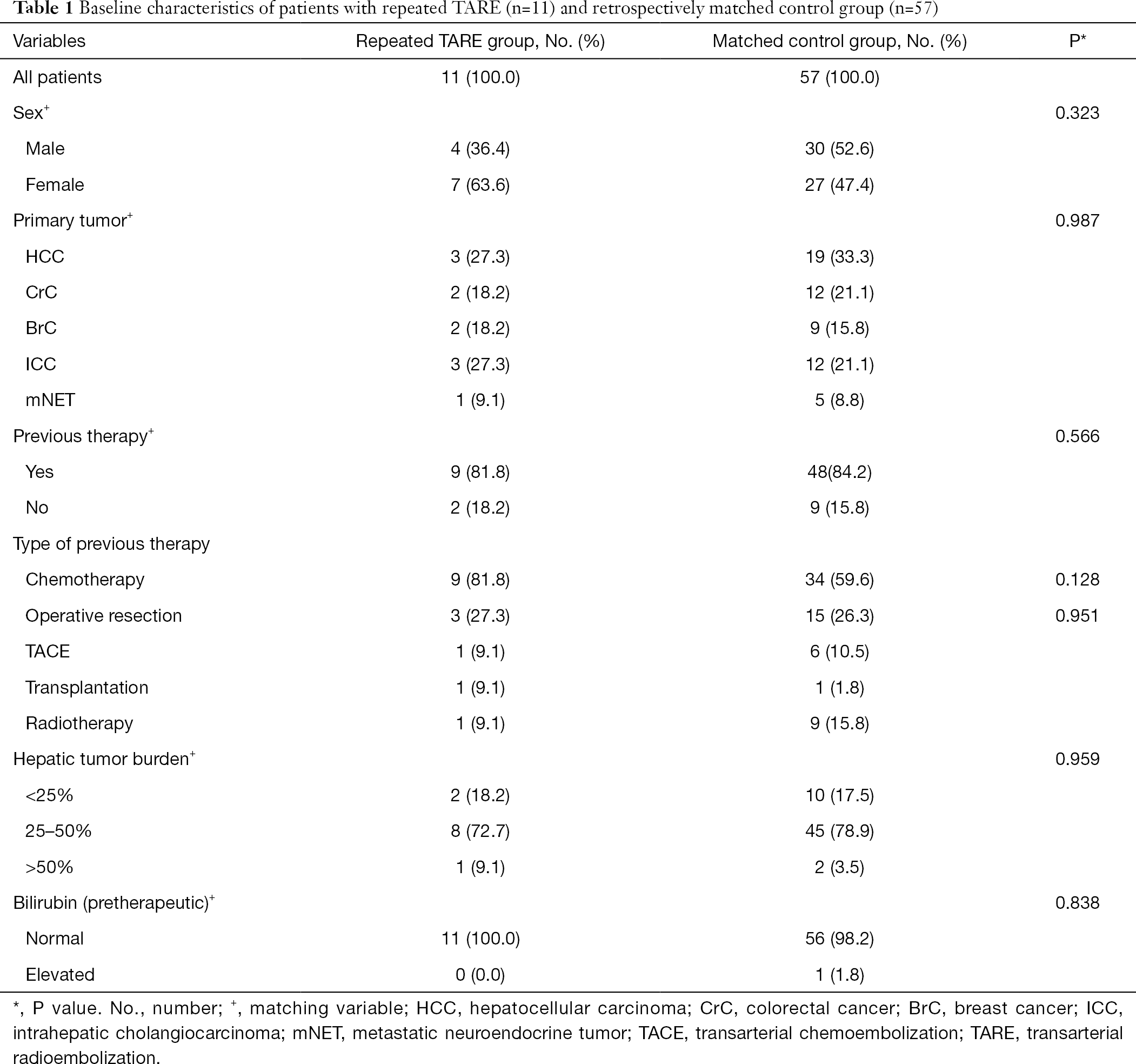 All radioembolization procedures were performed on an inpatient basis. Repeated application of resin SIR spheres was performed either in a monolobar (n=7 right lobe, n=1 left lobe) or bilobar (n=3) catheter position. In all cases, the application of SIR spheres was performed via a coaxial microcatheter in a selective or super-selective manner. Median applied dose for the second TARE was 1.5 GBq while it was 1.4 GBq for the first TARE. All procedural characteristics of repeated TARE group are summarized in Table 1. 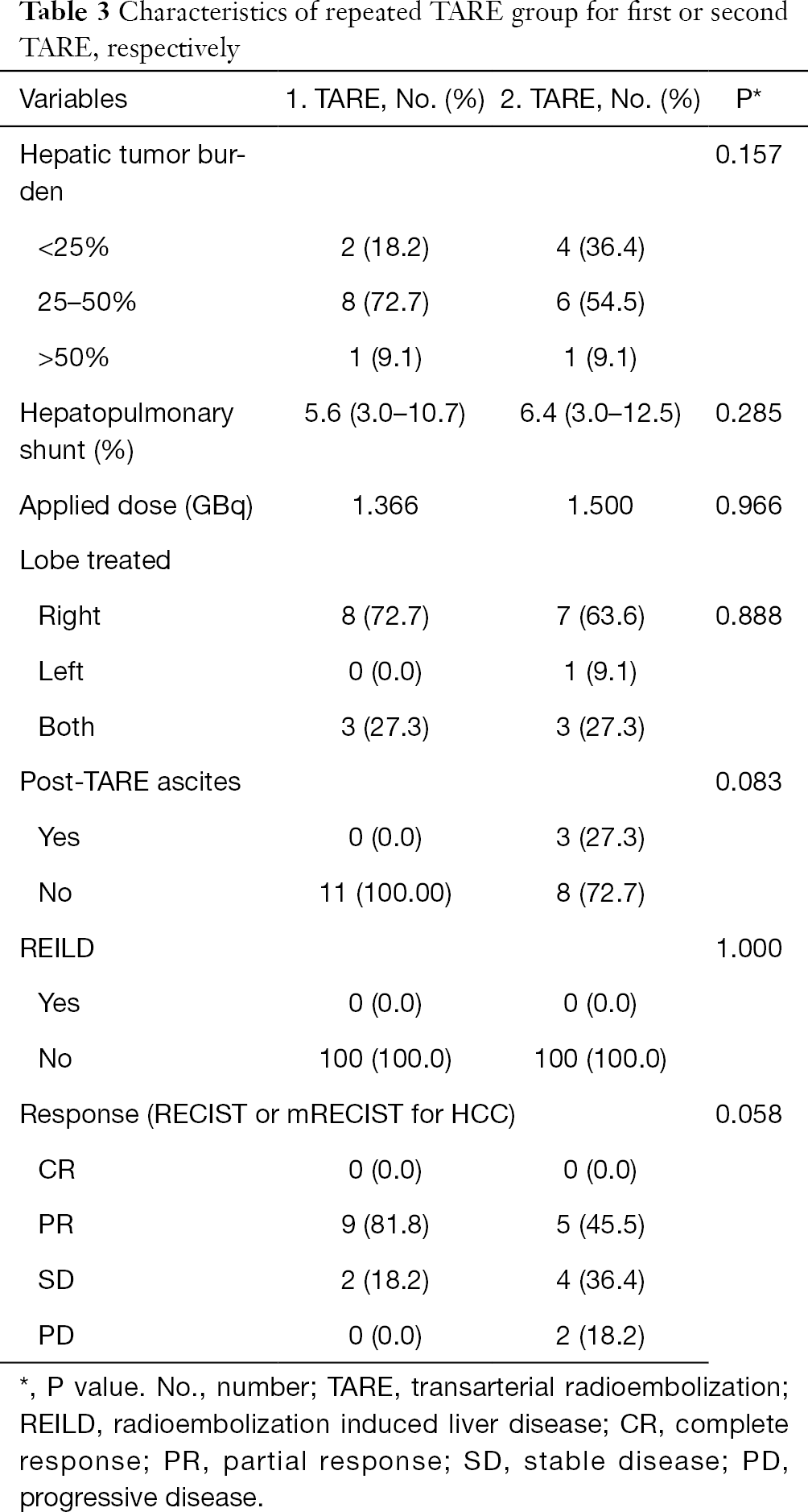 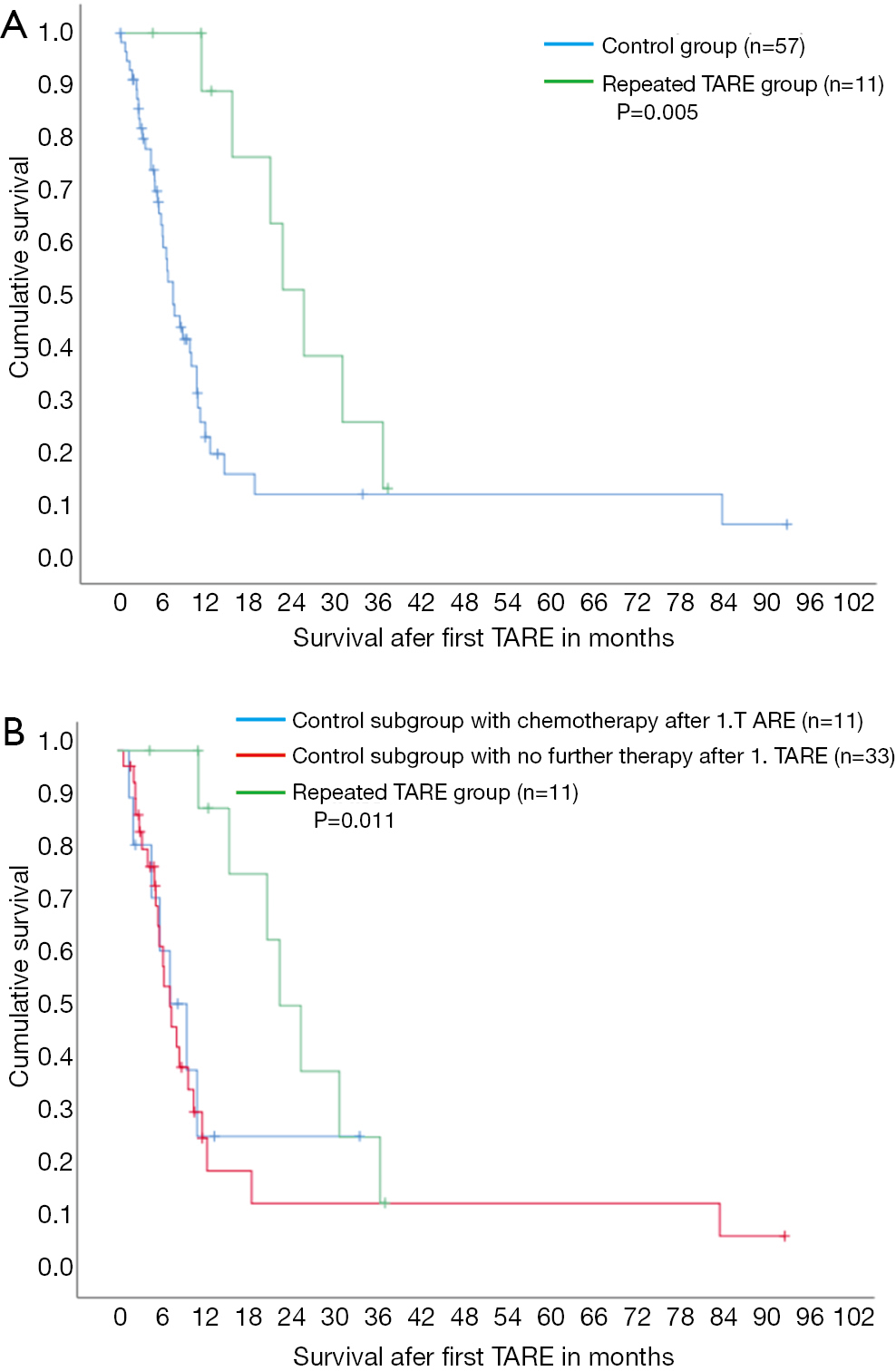 90Y TARE is a promising treatment option in primary and secondary liver cancer (21). Although multicenter studies showed no benefit in overall survival for first-line TARE combined with chemotherapy or sorafenib respectively (3,4), there are reports of effective and safe TARE in the latter therapy options after first-line strategies have failed or are not feasible due to advanced tumor progression (7,9,10,22). Along with the advancements in chemotherapy protocols and immunotherapies TARE will probably be integrated in multimodal treatment setting (8,23). Within these concepts it is important to be aware of adverse events reducing patient safety. Although a variety of side effects can occur after TARE treatment (7,9,10,24), there is limited evidence on safety of repeated TARE (12-14). This study shows that repetition of TARE is accompanied by a similar alteration of laboratory values as compared to first TARE and no severe liver decompensations in terms of REILD were observed in our patient cohort. However, 3 patients (27.3%) developed ascites after second TARE. Since Lam et al. found in a study of n=8 patients an increased risk of REILD due to repeated TARE (14), patients should be carefully monitored after second TARE. However, the results of our study are in line with a previous study on repeated TARE in liver cancer, where a preserved liver function and a similar number of adverse events comparable to first TARE were observed (13). A second study in intrahepatic cholangiocarcinoma (ICC) similarly showed a favorable risk profile of repeated TARE with no case of REILD (12). In HCC, larger studies including some patients with sequential and repetitive TARE procedures found an acceptable risk of liver toxicity (8,11). However, these studies do not report toxicity, therapy response or survival of patients receiving repeated TARE compared to patients with single TARE.

Regarding outcome of repeated TARE, we observed a good tumor control rate with a 45.5% partial response and 36.4% stable disease rate after 3 months. For repeated TARE in ICC a relevant part of complete response has been described (12), which we did not observe in our study. The tumor response rates after repeated TARE from our study are comparable to data from existing literature after first TARE (23). To the best of our knowledge, we provide the first study comparing overall survival after repeated TARE with a retrospectively matched control group which received only single TARE and various therapies afterwards. Here, repeated TARE showed a significantly longer overall survival compared to the control group in its entirety as well as compared to the control subgroup receiving systemic chemotherapy after first TARE. Our results could be influenced by the allocation to second TARE only in case of local tumor control or therapy response after first TARE with potentially including more advantageous (molecular) cancer characteristics. Our results might therefore not be veritable in case of a progressive disease after first TARE. However, the retrospective matching process used in this study considered with tumor entity, hepatic tumor burden and previous therapy (amongst others) factors, which showed to be predictors of overall survival after TARE (25). Thus, repeated TARE should be considered as therapy option in advanced liver cancer.

This study is limited by its retrospective character and the heterogeneity of the analyzed patient cohort hampering generalizability, especially with regard to previous therapies and underlying disease entity, which is known to have a significant impact on safety especially with respect to liver function.

In conclusion, the present study shows that repeated 90Y TARE can be considered as a safe treatment option with similar local tumor control compared to first TARE and improved overall survival compared to other treatment paths or solely palliative care in advanced liver cancer.

Reporting Checklist: The authors have completed the STROBE reporting checklist. Available at http://dx.doi.org/10.21037/atm-20-2658

Conflicts of Interest: All authors have completed the ICMJE uniform disclosure form (available at http://dx.doi.org/10.21037/atm-20-2658). KR, MW, MK report receiving lectureship compensations and/or proctoring fees by SIRTeX Medical Europe, outside the submitted work. The other authors have no conflicts of interest to declare.

Ethical Statement: The authors are accountable for all aspects of the work in ensuring that questions related to the accuracy or integrity of any part of the work are appropriately investigated and resolved. The study was conducted in accordance with the Declaration of Helsinki (as revised in 2013). The study was approved by the local ethics committee of the Westfälische Wilhelms-University of Muenster, Germany (No.: 2018-638-f-S). Due to the retrospective character of this trial informed consent of patients was not obtained.