A comparison of the delivery of inhaled drugs by jet nebulizer and vibrating mesh nebulizer using dual-source dual-energy computed tomography in rabbits: a preliminary in vivo study

Aerosol inhalation is a well-known method of delivering drugs to the lungs of a patient receiving mechanical ventilation. Delivering drugs via the pulmonary route has several advantages, including increased local concentration of the drug in the lungs, improved lung receptor occupancy, increased absorption due to the large surface area, reduced local and systemic drug delivery, and reduced systemic adverse reactions (1,2).

The target area for inhalation therapy varies by disease. Whereas asthma patients need drugs delivered to the bronchi and bronchial airway (5), pneumonia patients may benefit from the delivery of drugs to the alveolar region. Hence, not only the total pulmonary drug dose but the regional distribution or aerosol deposition distribution is a key factor in the clinical success of inhalation therapy.

Lung deposition data play a vital role in assessing the efficiency of systems that deliver inhaled drugs. Radionuclide imaging is the primary method of visually evaluating drug deposition in the human airway and plays a role in the development of new inhaled medications and delivery devices (6). However, it has the disadvantage of exposing subjects and operators to health risks or even cancer due to the use of ionizing radiation (7-9). Low resolution and time constraints due to the decay of the radionuclide also limit its use as the gold standard for measuring lung deposition (10).

A noninvasive, next-generation imaging technique, dual-source dual-energy computed tomography (DSDECT), is increasingly used in clinical diagnosis. The advantages of DSDECT are that it permits free breathing without breath-hold, produces powerful images, and only needs a very small dose of contrast media. Especially for regional ventilation, DSDECT’s spatial resolution is much higher than that of radionuclide scanning imaging equipment. It also offers the ability to demine the iodine content of a lesion or region.

No studies to date have reported on the efficacy of DSDECT for assessing drug deposition in the lungs. Here, we used an animal model of mechanical ventilation to compare the ability of two nebulizers to deposit inhaled drugs in the lungs. We used conventional contrast agents and relatively safe (low-radiation), noninvasive, high-resolution dual-energy CT. We present the following article in accordance with the ARRIVE reporting checklist (available at http://dx.doi.org/10.21037/atm-20-1584).

Animal care and all animal experiments were approved by the Animal Ethics Committee of Shanghai Tenth People’s Hospital, Tongji University School of Medicine, and adhered to local animal care guidelines.

Twelve male New Zealand White rabbits (2.6–3.4 kg; Shanghai Jiagan Biotechnology Co., Ltd, China) were used. They were housed in individual cages in a room with constant humidity and temperature under a 12 h light-dark cycle and fed a standard rabbit diet and ad libitum.

Rabbits were randomly divided into two groups (VMN and SVJN), with six rabbits in each group. They were anesthetized via intraperitoneal injection of 5% chloral hydrate and a tracheostomy was performed. A tracheostomy tube of 4.0 mm inside diameter was inserted into the trachea. We used an infant-use ventilator and circuits in conjunction with the experimental nebulizer placed in the inspiratory limb of the circuit as recommended (11). The experimental settings are shown in Figure 1. To avoid the interference of iodine in the exhaled breath with the imaging, we used a new breathing system filter (Ultipor 100; Pall Corporation, Ann Arbor, MI, USA) for each rabbit test. All lung CT images were obtained via a third-generation dual-source CT scanner (SOMATOM Force; Siemens Healthcare, Forchheim, Germany). Baseline CT of the chest was performed before aerosol therapy. 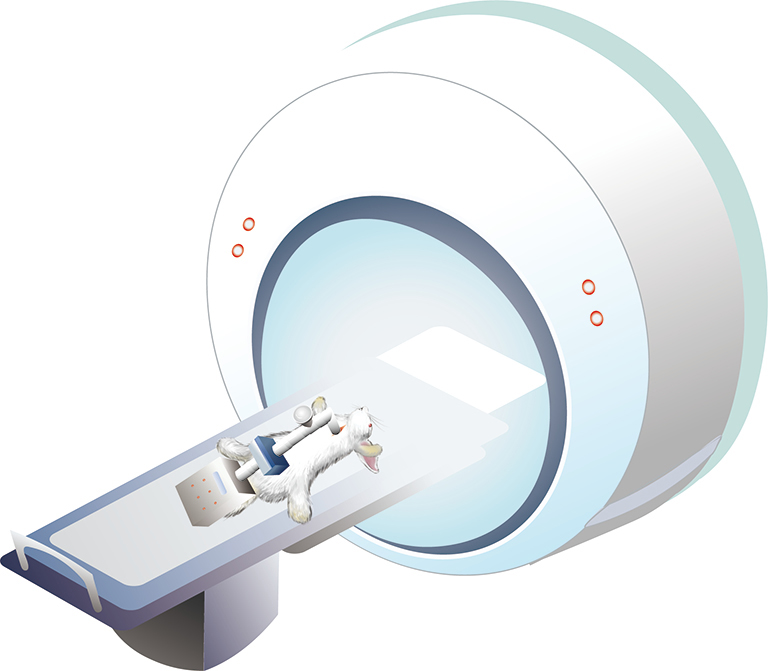 Figure 1 In vivo model of the delivery of inhaled drugs by jet nebulizer and vibrating mesh nebulizer via dual-source dual-energy computed tomography.

We first wanted to confirm that DSDECT was a feasible method of assessing aerosol inhalation. Therefore, two rabbits received 2 mL methylene blue-iohexol-normal saline (1:1:5) by inhalation before DSDECT scan. After scanning, the rabbits were euthanized and their lungs were rapidly removed and dissected longitudinally from the center of the bronchus along the coronal plane.

All dual-energy images were transferred and reconstructed on a workstation equipped with dedicated software (Syngo.via version VB10B; Siemens Healthcare). Three images were taken: a 70 kV image, an Sn150 kV image, and a weighted image with 60% density from the 70 kV image and 40% density from the Sn150 kV image. Ventilation images were obtained based on the material decomposition theory. The material parameters were as follows: –1,000 HU for air at 70 kVp, 60 HU for soft tissue at 70 kVp, –1,000 HU for air at Sn150 kVp, and 54 HU for soft tissue at Sn150 kVp. The relative contrast material enhancement was 2, with a minimum value of –960 HU and a maximum value of –400 HU; the range was 4.

All images were independently and blindly evaluated by two chest radiologists with more than 10 years of experience in interpreting chest CT scans. Morphological changes and ventilation images were assessed for each rabbit for each of the five lobes of the lung: right upper, right middle, right lower, left upper, and left lower.

The standard approach to evaluating local concentrations of a radiolabeled substance is to measure the average activity per unit volume within defined regions of interest (ROIs). ROIs are binary masks that group voxels corresponding to specific anatomical regions. An experienced radiologist placed circular ROIs 0.2 cm2 in the lobes. The average CT value (HU) and average iodine density (µg/cm3) were captured in the ROI. The overlay value, which is a DSDECT measure of iodine concentration on iodine maps developed by Siemens, was measured four times to quantify the iodine content in the lobes. The results were averaged as a final measure of overlay.

Two rabbits were used to clarify the relationship between methylene blue staining and dual-source dual-energy iodine imaging. One rabbit in the SVJN group was excluded because it died during the study. Thus, nine rabbits were included in the final data analyses: four in the SVJN group and five in the VMN group.

The relationship between methylene blue staining and dual-energy iodine imaging

DSDECT scan after the inhalation of methylene blue-iohexol-normal saline (1:1:5) revealed the same iodine distribution as tracheobronchial methylene blue staining on dissection, with deeper staining and a greater concentration of iodine in the right upper lobe, as shown in Figure 2.

Figure 2 Methylene blue staining and dual-energy iodine imaging in rabbits illustrating the good relationship between the two methods. Iodine is indicated in red. The iodine overlay image is superimposed on a gray-scale mixed image.

Average change in CT value and iodine density between the groups 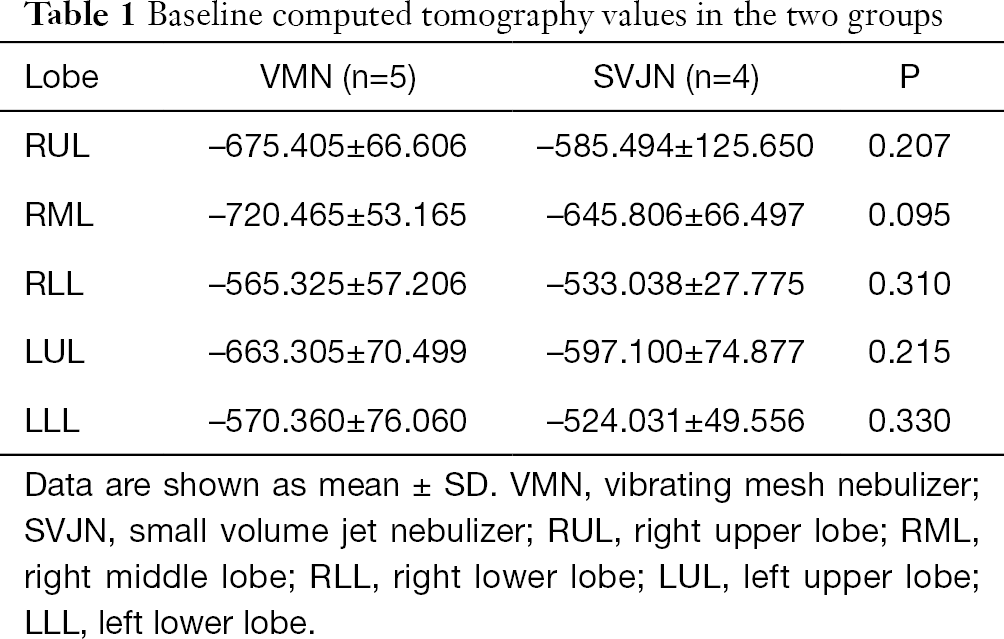 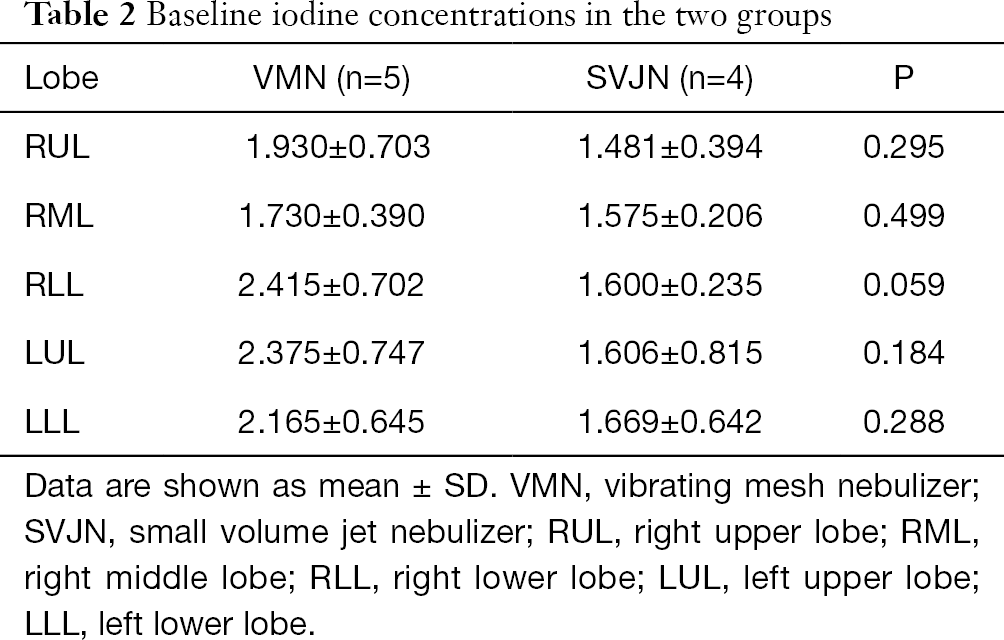 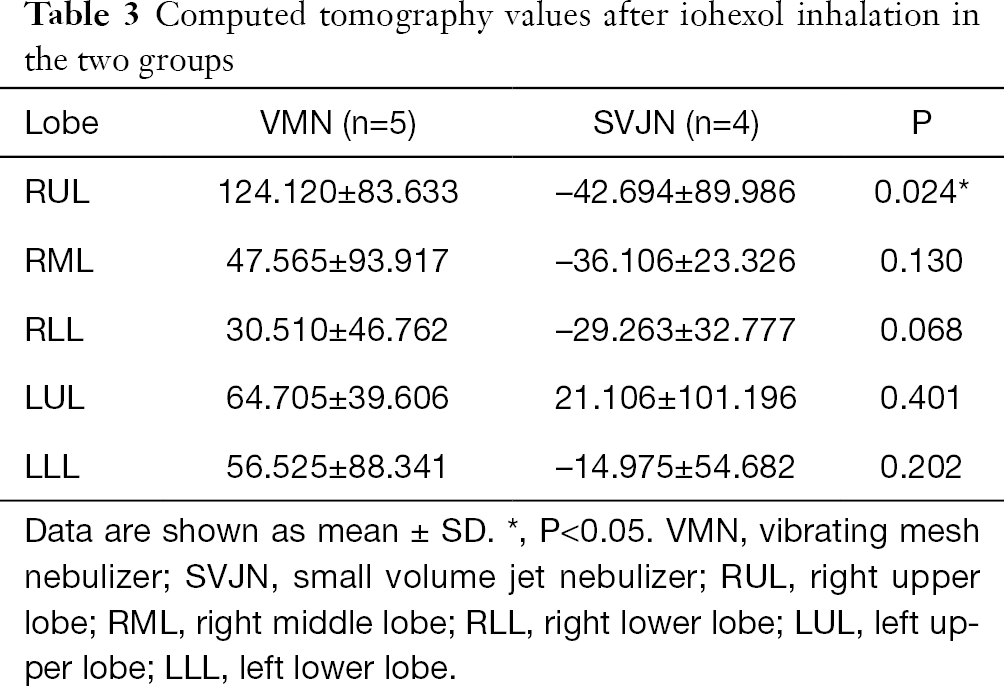 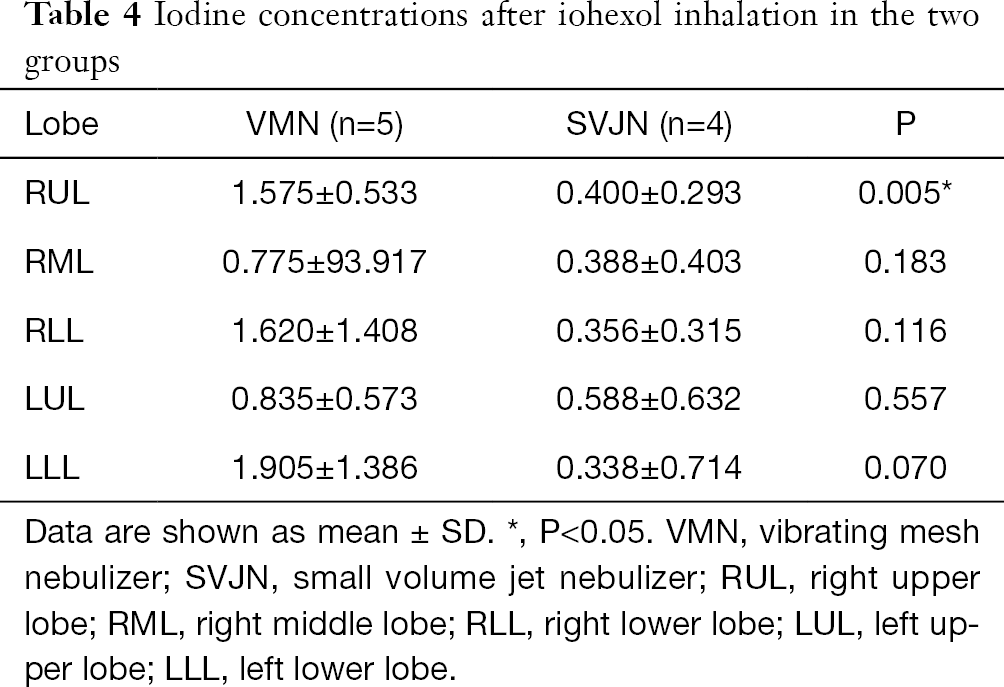 On iodine maps of DSDECT, the brighter the color, the higher the iodine concentration. The iodine concentration was high in the VMN group (bottom row of Figure 3) in overall views of the coronal plane (left) and axial plane (middle) and three-dimensional reconstruction images, as shown in Figure 3. The DSDECT images also have high resolution. 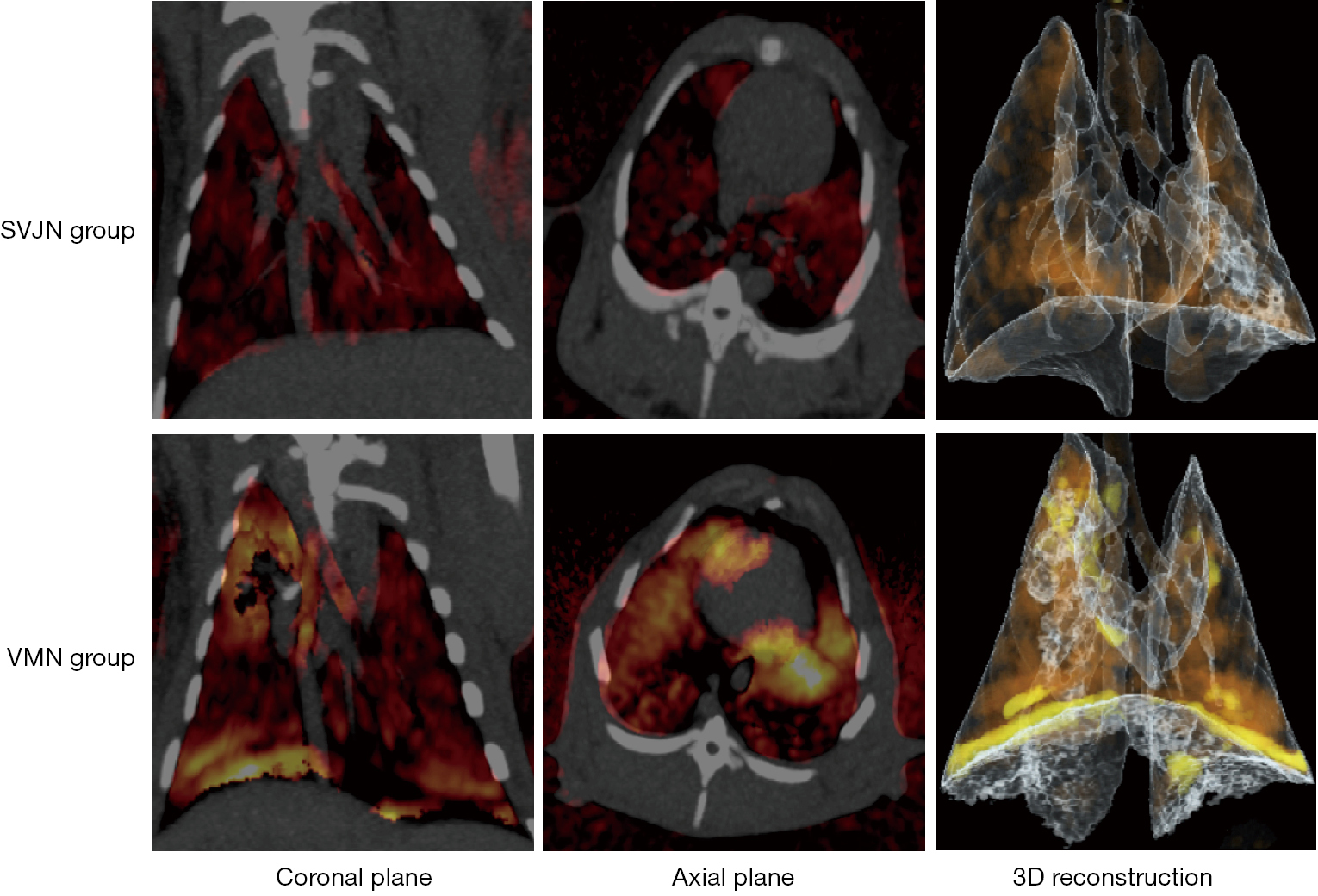 Here, we used DSDECT to compare the deposition of two nebulizers in a rabbit model of mechanical ventilation. DSDECT uses two independent detector tube systems, records the difference in attenuation of different substances at different levels of energy X-ray, and uses a three-substance separation algorithm to quantitatively differentiate and quantify materials (12). This technique, which avoids motion artifacts associated with breathing, is particularly advantageous given the complex three-dimensional structure of the lung. This modality could potentially produce finer resolution images than are available through CT scans and spare patients the significant radiation burden associated with CT. In this study, we used the latest CT scanner, the third-generation dual-source CT SOMATOM Force scanner from Siemens.

There are two major findings from this study. First, the average CT value decreased significantly and the average iodine density increased significantly in the right upper lobe of mechanically ventilated rabbits in the VMN group. This means that more inhaled drugs were deposited in the lungs when a VMN was used. Similar results were obtained in previous studies (13-15). One of the main reasons for this finding is that VMNs have a lower residual volume (the amount of drug that remains in the nebulizer at the end of nebulization) after nebulization and a faster output rate of nebulization than standard SJVNs due to different working principles (3,4,13). Therefore, clinicians should change the dose of the inhaled drug for different nebulizers to avoid overdosing or underdosing. For the same dose of nebulization therapy, more drug was deposited in the lungs by VMN; this is similar to the results of previous radionuclide imaging studies. The atomizing efficiency of VMNs is higher than that of SVJNs.

Second, the distribution of the drug to the lobes of the lung varied by nebulizer under mechanical ventilation. VMNs deposited more drugs in the right upper lobe. This may be because the right main bronchus is relatively straight, and the inhaled aerosol hits the wall and deposits (16). Or it could be related to the fact that bronchial deposition of drugs depends on the particle diameter: the smaller the particle, the more easily it reaches the periphery of the lung (17). VMNs produce particles ideal for high lung deposition, whereas SVJNs produce smaller particles that are more difficult to deposit. Put another way, SVJNs produce more uniform distribution of inhaled drugs but require an increase in dosage.

The main airway is the largest site of drug deposition. In this study, the research target was invasive mechanical ventilation, both tracheal intubation and tracheotomy. The type of tracheal tube has a minimal, nonsignificant effect on aerosol delivery (18). This study involved tracheotomy in rabbits; deposition in conducting airways, the pulmonary acinus, and the upper airway was not considered. The main reason for not including the main airway in this study is that it is mainly occupied by the artificial airway after endotracheal intubation or tracheotomy, and a large amount of drug adheres to the wall of the artificial airway.

Despite the valuable results from the present study, several limitations should be addressed in future research. Proper contrast agents and doses need further validation in large-scale animal models before being tested in human trials. Also, researchers must determine the proper method for increasing the distribution of inhaled medications in the lungs to improve dose uniformity.

DSDECT is a useful new technique in the field of clinical CT imaging. The ability of dual-energy and multi-energy CT to differentiate materials of different effective atomic numbers and reconstruct them in three dimensions has several new clinically relevant applications. DSDECT that combines imaging agents may provide a new means of evaluating the use of different types of nebulizers in inhalation therapy, but more prospective research is required to provide a basis for clinical applications. This method appears promising for describing regional lung deposition from two commonly used nebulizers during mechanical ventilation in the in vivo model of rabbits.

Reporting Checklist: The authors have completed the ARRIVE reporting checklist. Available at http://dx.doi.org/10.21037/atm-20-1584

Conflicts of Interest: All authors have completed the ICMJE uniform disclosure form (available at http://dx.doi.org/10.21037/atm-20-1584). The authors have no conflicts of interest to declare.

Ethical Statement: The authors are accountable for all aspects of the work in ensuring that questions related to the accuracy or integrity of any part of the work are appropriately investigated and resolved. Animal care and all animal experiments were approved by the Animal Ethics Committee of Shanghai Tenth People’s Hospital, Tongji University School of Medicine, and adhered to local animal care guidelines.