Regulation of the regeneration of intestinal stem cells after irradiation

Radiotherapy is one of the most important methods to treat cancer patients. However, patients with abdominal and pelvic malignant tumors who receive radiotherapy may develop radiation enteritis such as diarrhea, abdominal pain, bleeding, intestinal stricture, obstruction, or even perforation, which significantly affects the quality life of the patients (1-3). The treatments for radiation enteritis are mainly enteral and parenteral nutrition support and drug treatment, including mucosal protective agents, anti-inflammatory drugs and intestinal probiotics, or even surgical intervention (1,4-6). Therefore, how to reduce the occurrence of radiation enteritis is a clinical problem in urgent need to be solved.

The intestine epithelium can quickly self-renew every 4–5 days, the fastest tissues among mammalian (7). At normal state, the intestinal stem cells located at the base of the crypt divide daily to produce proliferating cells and maintain homeostasis (8,9). Once the intestine received different kinds of extrinsic or intrinsic injuries, the regeneration response could be triggered to repair the damage (10). Upon intestine injury, R-spondin 3 will help the stem cell recovery by promoting the epithelial regeneration (11). There are cluster cells termed as the revival cell, once intestine damage by irradiation, these cells will undergo transient expansion to promote the regeneration and revive the homeostasis (12).

Male C57BL/6 aged 8–12 weeks were used. Experiments were performed under a project license (No: 20171416A298) granted by the department of laboratory animal science of Fudan University, in compliance with national guidelines for the care and use of animals. Each study group need at least 3 mice randomisely allocated.

The mouse was anesthetized with ether and fixed to a plate, then abdomen irradiation (ABI) was given to it using a 5-mm thick lead shield to protect the head and chest. Irradiation was delivered with 250 kVp X-rays produced by X-Rad 320.

Mice were sacrificed for the cervical dislocation and the small intestinal tissue samples were collected at 3.5, 5, and 10 days after irradiation. These samples were incubated in the 4% freshly prepared neutral-buffered formaldehyde for 16–18 hours to fix and then embedded in paraffin blocks as previously described (14,15). Four-µm sections were used for hematoxylin and eosin (HE)-stained analysis.

Paraffin-embedded tissue sections were used for detecting CD44 by immunofluorescence staining. Subsequently, 4-µm sections were deparaffinized and rehydrated through graded ethanol. Following that, endogenous peroxidase activity was blocked for 10 minutes with PBS holding 0.3% H2O2. After that, antibody sections performed antigen retrieval for 20 minutes in 0.1 mol/L citrate buffer (PH 6.0). Then, nonspecific antibody binding is blocked for 1 hour by incubation with 10% normal goat serum. Also, sections were incubated with rat anti-CD44 (BioLegend, 1:200 dilution) overnight at 4 °C in a humidified chamber. Finally, Rabbit-anti-rat secondary antibody was used to incubate the sections.

The small intestine about 10 cm from jejunum was isolated at day 5 post-irradiation, then opened longitudinally and washed with cold PBS plus penicillin (100 µ/mL) + streptomycin (100 µg/mL) (called ABS). The tissue was chopped into around 5 mm pieces and further washed with cold ABS. The tissue fragments were incubated in 5 mM EDTA with PBS for 40 min on ice. After removal of the EDTA medium, the tissue fragments were vigorously suspended by shaking the 50 mL centrifuge tube. Crypt fractions were at once diluted (1:1) with basic culture medium and centrifuged at 1,200 rpm for 3 min at 4 degrees. The crypt pellets were resuspended in 10 mL Basic culture medium. This fraction was passed through 100- and 70-µm cell strainers (BD Bioscience) to remove residual villous material. Isolated crypts were counted and pelleted. A total of 500 crypts were mixed, with 50 µL of Matrigel (BD Bioscience) and plated in 24-well plates. After polymerization of Matrigel, 500 µL of crypt culture medium Culture medium: advanced DMEM/F12 medium containing penicillin/streptomycin, Glutamax, 10 mM HEPES, 1× N2, 1× B27 and 1um N-acetylcysteine, growth factors 50 ng/mL EGF, 500 ng/mL R-spondin 1, 100 ng/mL noggin.

Mouse cDNA was synthesized from 500 ng of total RNA using a DNA synthesis kit (Takara). The relative expression of WNT11 was detected by qRT-PCR, which was performed using a LightCycler 480 (Roche). The primers used in the qRT-PCR were as follows: 5'-TTCCGATGCTCCTATGAAGG-3' and 5'-GGCTGACAGGTAGCGGGTCT-3' for WNT11; 5'-CAGCAACTCCCACTCTTCC-3' and 5'-GGTCCAGGGTTTCTTACTCC-3' for GAPDH; 5'-GGGACCAGATGCGATAC-3' and 5'-AGGAGACTGGCGGGTAG-3' for Lgr5; 5'-GGATTCATCCCAACGCTAT-3' and 5'-ACTCGCCCTTCTTGCTGT-3' for CD44. 2−∆∆Ct method was used to calculate the results.

CHO cells were used to construct the Wnt11 over-expression cells (CHO-Wnt11 cells). Wnt11 over-expressed plasmid pEZ-Lv185-Wnt11 was purchased from GeneCopoeia, the negative control (NC) and Wnt11-expressing lentiviruses were packaged in 293T cells according to their instructions. When the CHO cells were at 80–90% confluence, they were infected with either NC- or Wnt11-expressing lentiviruses and screened with 50 µg/mL hygromycin. The over-expression of Wnt11 in CHO-Wnt11 was confirmed by qRT-PCR. CHO-Wnt11 cells are passaged in 1:6 in a T75 flask. The culture medium was collected when the flasks were confluent in about 4 days and replaced with fresh culture medium. Three days later, we collected the culture medium again, then discarded the cells. The first collected medium and the second mixed 1:1 together, then spun down the mix for 5 minutes at 1,500 rpm to remove floating cells and filtered through 0.22 µM filter. The Wnt11 CM can be frozen and stored at −80 °C. The concentration of the Wnt11 CM was 50% for culturing the organoid.

The organoids were cultured using Wnt11 CM and control group for 5 days after irradiation. The size of the regenerated alive organoids was measured using Image-Pro Plus 6.0 (Media Cybernetics). All data were from three independent experiments and shown as mean ± standard deviation (SD). One-way ANOVA and Student’s t-test were performed using GraphPad Prism 6.0 software to determine significant differences between the two groups, with P<0.05 considered significant. 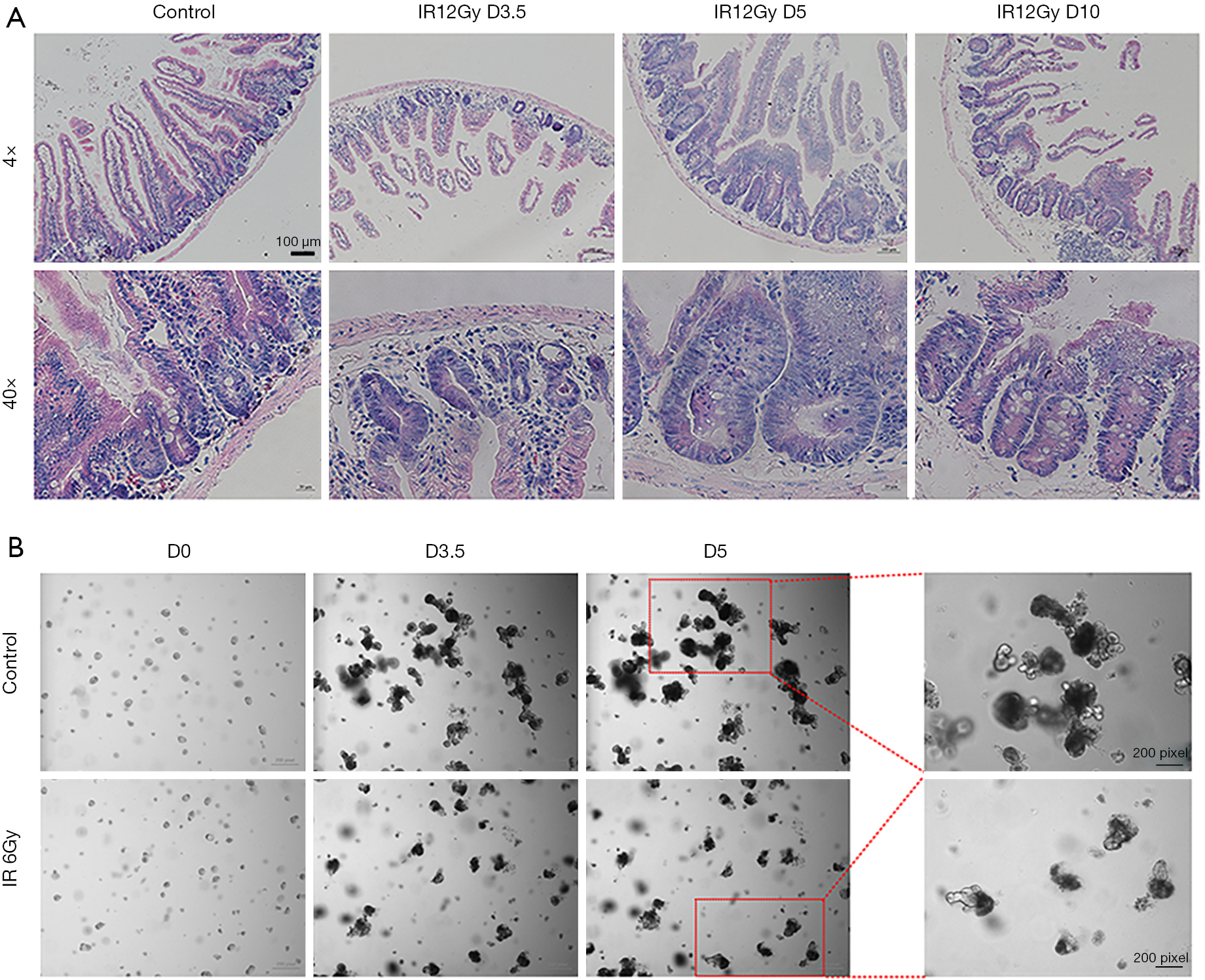 We chose the dose of 6 Gy irradiation to set up the regeneration model of small intestinal organoid in vitro. The small intestinal organoids were cultured after carefully isolated. After 0 and 6 Gy irradiation, microscopic observation showed that on the 1st and 2nd day after 6 Gy irradiation, the organoids did not grow, and the initial crypt cells gradually broke down and died (data not shown). While on the 3.5th day, the surviving crypt stem cells proliferated gradually, and organoids with small intestinal cavities could be identified. Organoids sprouted and grew slowly on the 5th day. However, the unirradiated organoids sprouted and grew on the 3.5 days. Budding increased in bulk on the 5th day, and many apoptotic cells fulfilled the intestinal cavity of the organoid showing black (Figure 1B).

The expression of CD44 is higher in the regenerated crypts, while Lgr5 is lower 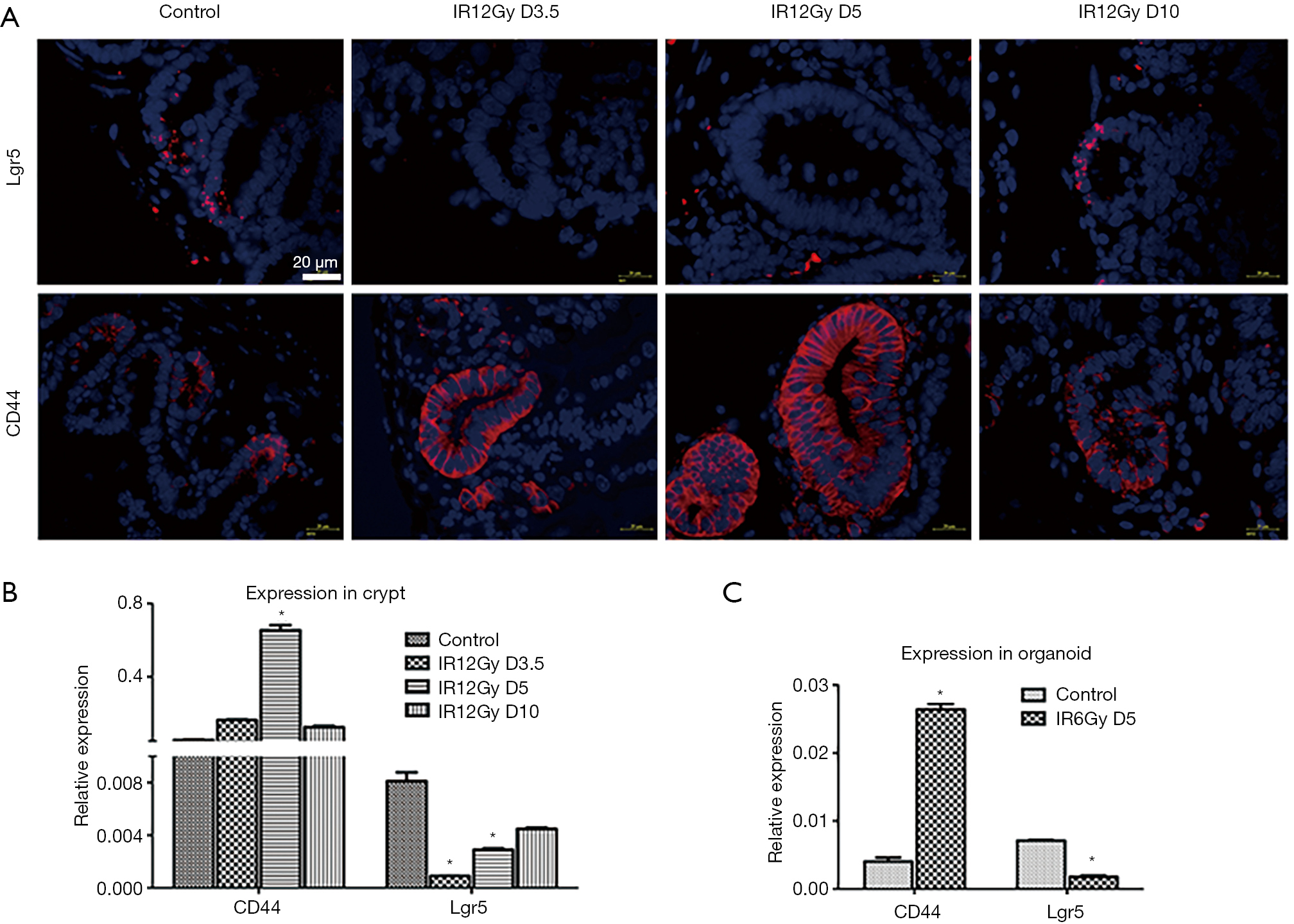 To further find out the role of CD44 in the regenerating of intestinal stem cells. We isolated crypts, both the unirradiated control group and the ABI group (Figure 3A). The isolated crypts are digested into single cells to be sorted for CD44(+) cells. PI staining was used to select the live cells. CD45 staining was used to exclude the white cells. EpCAM staining is used for selecting the epithelial cells. The sorting results showed that the ration of CD44(+) cells was much higher in the ABI group than the control group (Figure 3B). The peak of CD44(+) cells in the irradiation group shifted to the right (Figure 3C) by peak map analysis. These results showed that the expression of CD44 increased significantly in the regeneration crypts. 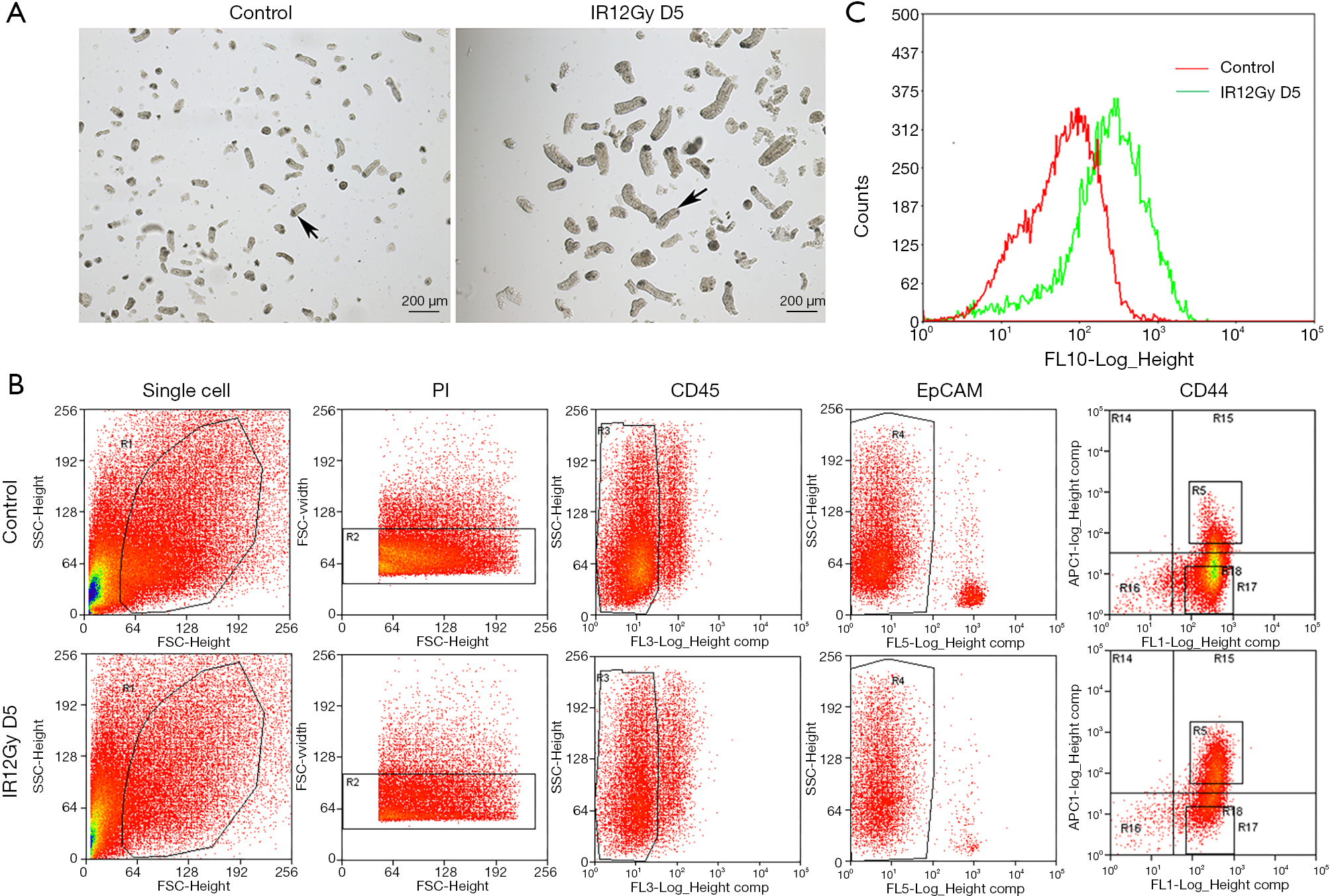 We performed RNA-seq to compare the difference between CD44(+) cells and the unirradiated control group. We analyzed the results of the RNA-seq and found that the expression of Wnt11 was much higher in the irradiation group than the control group (Figure 4A). Then we detected the expression of Wnt11, both crypts, and organoids. The results have shown that Wnt11 increased significantly in the regenerating intestinal stem cells both in the crypts and organoids (Figure 4B,C).

Wnt11 can facilitate the regeneration of the intestinal stem cell 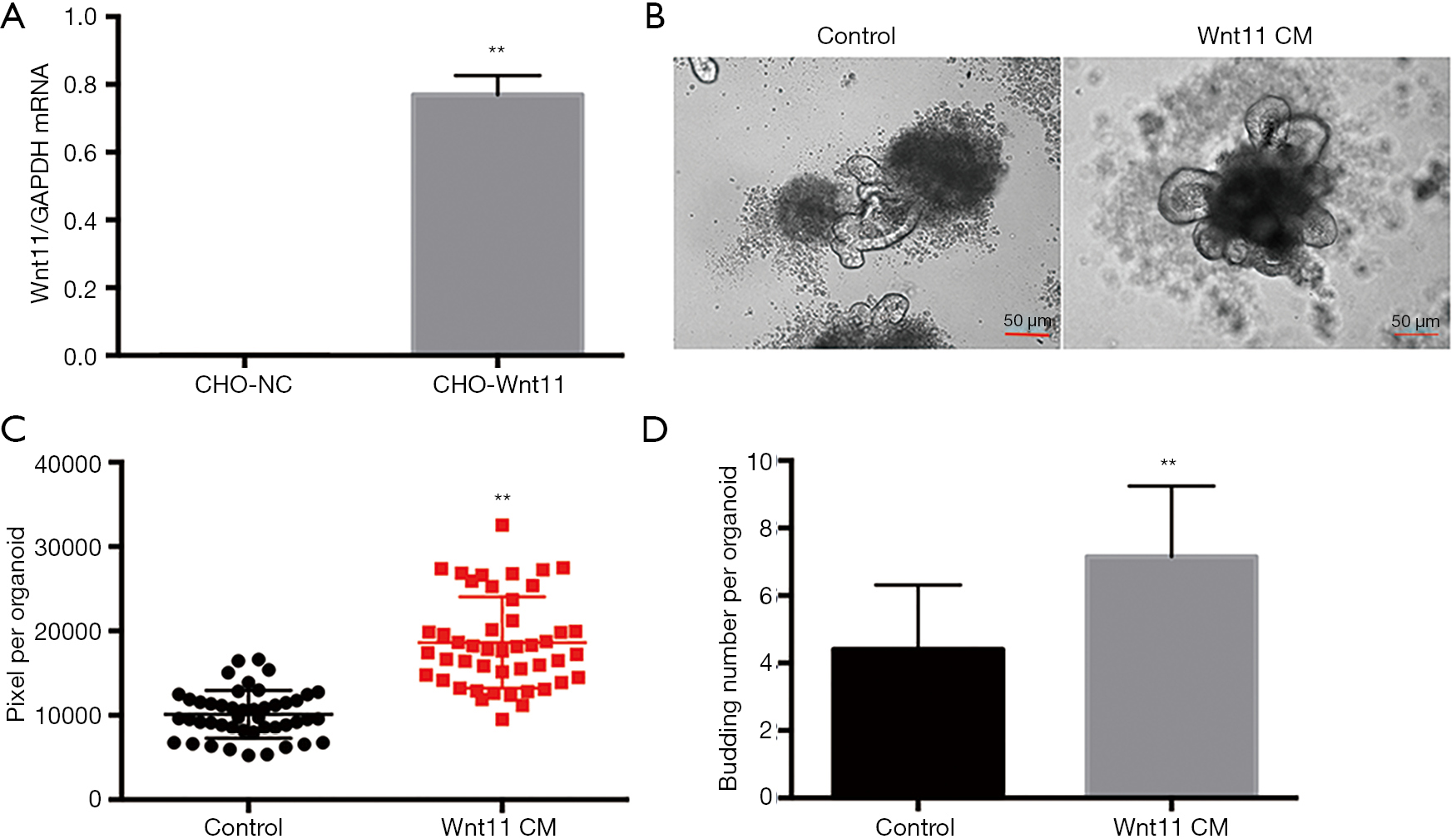 Lgr5 is considered a biomarker for intestinal stem cells. It was reported that single Lgr5+ cells could grow into a “minigut” structure that comprised all kinds of differentiated intestinal cell types in vitro once given the proper condition medium (16). Another report has shown that Lgr5+ cells played a significant role in radiation-induced regeneration; the regeneration response was dramatically altered after depletion of Lgr5+ intestinal cells (17). However, in Hua’s (14) research, they found that after the Lgr5-lacZ transgenic mice treated with 12 Gy, the Lgr5-Laz intestinal cells were nearly not detected on day 2 and day 3 post-irradiation, but less was found on day 5 post-irradiation, while recovered on day 10 post-irradiation. Our founding was the same as their results (Figure 2B), showing a complicate role of Lgr5 in regulating the regeneration of intestinal stem cells.

CD44 is a transmembrane glycoprotein that plays a type of function (18). The CD44+ cells in the mouse intestine are mainly in the stem cell region at the bottom of the crypt (19). CD44+ cells isolated from mice, small intestine, and colon are recognized as intestine stem cells because these cells express high levels of stem cell-associated genes (20), while little is known about whether CD44+ cells contribute to the regeneration of intestinal stem cells. Our study has shown that during the radiation-induced regeneration of intestinal stem cells, the expression of CD44 increased significantly, showing that there will be a correlation between CD44 and regeneration. Therefore, we perform RNA-seq using the sorting the CD44(+) cells and the unirradiated control cells. We try to find out some genes or signal pathways that change during the regenerating process, which may play a role in regulating intestinal stem cell regeneration.

By analysis of the RNA-seq data, we found Wnt11 was highly expressed in the CD44(+) cell group. Wnt11 is one of the Wnt-family members and regulates cellular behavior by non-canonical mechanisms (21). Wnt11 is also playing a role in mammalian heart development (22). During the growth process of the nephron progenitor, Wnt11 regulates the organization of cells by non-canonical mechanism (23). As mentioned above, Wnt11 plays a role in regulating the development of progenitors. In our study, we also found that the expression of Wnt11 was more in the regenerating stem cells. By adding Wnt11 CM to culture the organoids after irradiation, the newborn organoids proliferated much better than the control group. Our study found that both CD44 and WNT11 expressed higher during the regeneration of the intestinal stem cells, but there was a study reported that WNT11 overexpressing SKOV-3 cells showed lower expression of CD44 (24), which was not consistent with our results, indicating that the interaction between CD44 and WNT11 need to be fully explored. It was reported that Wnt11 combines with another non-canonical Wnt ligand Wnt5a can jointly inhibit the activity of classical Wnt/ β-catenin (25,26). Wnt5a can promote intestine regeneration through the TGF-β signal pathway (27). We hypothesis that Wnt11 may promote the regeneration of intestinal stem cells through a non-conical Wnt signal pathway by interacting with CD44, which needs further research to prove.

As our study presented, on the 10th day after irradiation, intestinal stem cells repaired the radiation damage through self-regeneration, and the shape and size of the crypt began to return to normal. At this time, the expression of CD44 and Wnt11 dropped to a normal level. However, the expression of Lgr5 resumed at the crypt bottom, indicating that the conical Wnt signal pathway was activated again. Also, it played a role in supporting the homeostasis of the intestinal crypt. However, these speculations need to be confirmed by further research.

Reporting Checklist: The authors have completed the ARRIVE reporting checklist. Available at http://dx.doi.org/10.21037/atm-20-4542

Conflicts of Interest: All authors have completed the ICMJE uniform disclosure form (available at http://dx.doi.org/10.21037/atm-20-4542). The authors have no conflicts of interest to declare.

Ethical Statement: The authors are accountable for all aspects of the work in ensuring that questions related to the accuracy or integrity of any part of the work are appropriately investigated and resolved. Experiments were performed under a project license (No.: 20171416A298) granted by the department of laboratory animal science of Fudan University, in compliance with national guidelines for the care and use of animals.