Cataract surgery involves the replacement of an eye’s dysfunctional lens with an intraocular lens (IOL). The most critical aspect of the treatment, especially in eyes that have previously undergone corneal refractive surgery, is the calculation of IOL power, which constitutes a challenge for ophthalmologists. At present, laser-assisted in situ keratomileusis (LASIK) is the main type of corneal refractive surgery worldwide because it can provide efficient, predictable, and safe outcomes. In 1985, Peyman first introduced the concept of performing laser ablation under a corneal flap. In 1990, Pallikaris performed the first LASIK procedure in a rabbit model (1). With LASIK, a corneal flap is formed using a microkeratome and the corneal stroma is ablated using an excimer laser. Then the flap reattaches to the corneal surface.

IOL power calculation is not very precise even in unoperated eyes, where 20–25% of cases can have a prediction error in refraction higher than 0.5 diopters. Such a percentage is likely to increase when the cornea has been ablated by refractive surgery. There are three main causes of error in IOL power calculation: the keratometric index, the instrument, and effective lens position (ELP). Firstly, for calculating corneal power, the standard keratometric refractive index (normally, 1.3375) serves little purpose [P = (n − 1)/r] because the anterior to posterior corneal curvature ratio is modified by the laser (2-5). Secondly, the majority of currently available instruments extrapolate the central corneal curvature based on paracentral measurements; therefore, following myopic corneal ablation, a steeper measurement can be recorded for the corneal curvature than for the central curvature (3,6). Thirdly, the ELP error is erroneously predicted by third-generation theoretical formulas that derive their predictions from the corneal curvature (7-9).

The records of consecutive patients who had received cataract surgery after undergoing earlier LASIK or photorefractive keratectomy (PRK) for myopia in Beijing Tongren Hospital, from October, 2017, to September, 2019, were retrospectively reviewed. The inclusion criteria were as follows: (I) the manifest refraction values were measured at ≥3 months after cataract surgery; (II) the patient had corrected distance visual acuity of 20/32 or better; and (III) the patient had experienced no perioperative or postoperative complications in relation to cataract surgery. The exclusion criteria were as follows: a history of other ocular surgery, corneal disease, uveitis, vitreoretinal disease, trauma, systemic disease affecting vision, intraoperative and postoperative complications during refractive or cataract surgery. All cataract surgical procedures involved a clear corneal incision being made, phacoemulsification, and foldable IOLs being implanted in the capsular bag. The partial coherence interferometer (IOLMaster, V.7.5, Carl Zeiss Meditec, Inc., Dublin, CA) was used to perform ocular biometry. The Haigis-L formula value provided by the IOLMaster informed the surgeon’s selection of the power of the IOL that was implanted. All procedures performed in this study involving human participants were in accordance with the Declaration of Helsinki (as revised in 2013). The study was approved by the Institutional Review Board (IRB) of Beijing Tongren Hospital (NO.: TRECKY 2020-027). Because of the retrospective nature of the research, the informed consent is not required.

This study analyzed the accuracy of the Haigis-L, Shammas-PL, and Barrett True-K formulas. The IOL power calculated using the Haigis-L formula was determined by the IOLMaster reporter, which is available from the IOLMaster software. The Shammas-PL formula, which was recommended by Shammas and his colleagues, uses a modified corneal power and estimated pACD (20). The equation of corneal power is 1.14× Kpost-6.8, where Kpost represents the post-LASIK k-reading in diopters. The equation of pACD is (0.5835 × A)-64.40, where A represents the A-constant of the IOL being used. The Barrett True-K formula is based on the Barrett Universal II formula, and modified keratometry and Double-K solution were used. The calculation of IOL power with the Barrett True-K formula was performed using the web-based ASCRS IOL power calculator.

The refractive prediction error was calculated from the difference between the actual postoperative refractive outcome and the predicted refraction for each formula or method. For each formula or method the mean numerical error, median absolute error, mean absolute error, and the percentages of eyes within ±0.50 diopter (D) and ±1.00 D of the target refraction were calculated.

The average arithmetic IOL prediction error with the Haigis-L, Barrett True-K and Shammas-PL formulas, was −0.65, −0.39, and −0.46, respectively. Box plots of the refractive prediction errors of the three formulas tested are shown in Figure 1. For all three formulas, the mean numerical error was significantly different from zero (P<0.001). Table 2 shows the median absolute errors of the formulas (range, 0.40 and 0.57). The lowest median absolute error belonged to the Barrett True-K formula, which was significantly lower than that of Haigis-L formula (P<0.05) but similar to that of the Shammas-PL formula (P>0.05). 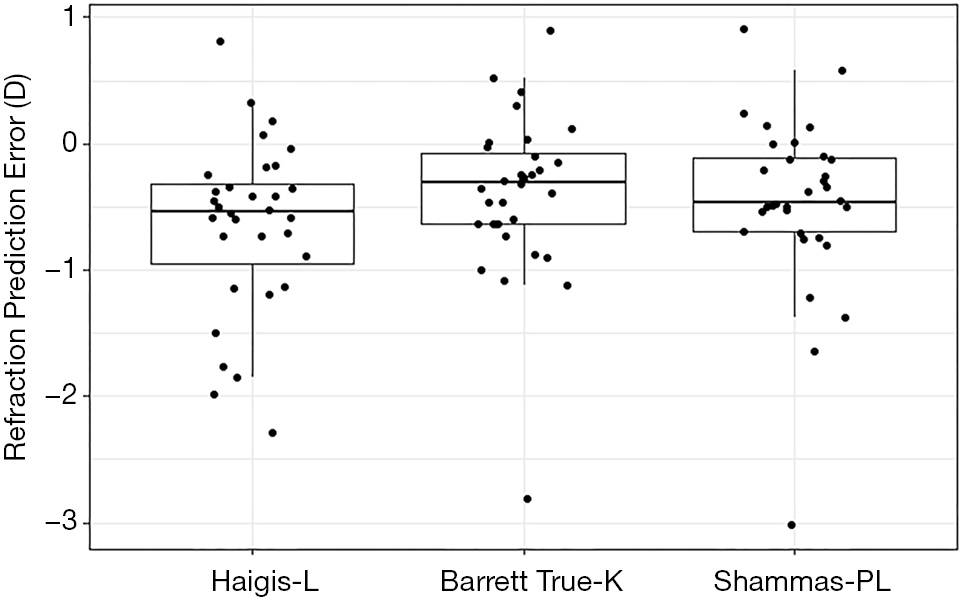 Figure 1 The refractive prediction errors of the three formulas (each dot represents the value for each eye).

Refractive prediction error within ±0.5 and ±1.00 diopter

There was no significant difference between the percentages of eyes with a refractive prediction error within either ±0.5 D or ±1.0 D across the three formulas (Table 3).

Table 3 The number and percentage of eyes within ±0.5 Diopter and ±1.00 Diopter from the target refraction
Full table

LASIK is a routine corneal refractive surgery with high safety and few complications. Complications such as diffuse lamellar keratitis, epithelial ingrowth, flap wrinkles, free cap, dry eye and so on are rare. Many studies have proven that corneal laser refractive surgery are associated with cataractogenesis (21-23). During LASIK surgery, laser irradiation and increased suction may promote cataract development in animal studies (24,25).

Although the accuracy of IOL calculation methods after myopic laser refractive surgery has been improving, calculating IOL power is still challenging. Our study compared the accuracy of the Haigis-L, Shammas-PL, and Barrett True-K formulas for calculating the IOL power in eyes that had previously undergone myopic corneal refractive surgery. We found that the Barrett True-K formula had higher accuracy than the Haigis-L formula but performed to a similar level as the Shammas-PL formula.

Currently, the absolute prediction error is expected to fall within ±0.5 D in 60–70% of eyes; Although there was no significant difference in the percentages of eyes with a prediction error within ±0.50 D or ±1.00 D using the three formulas in our study, the Barrett True-K formula performed much better compared to the Haigis-L formula. Similar results were published in the previous studies (17,28). In Abulafia’s study, the percentage of eyes within ±0.5 D was 46.7%, 50.0%, and 63.3%, and the percentage within ±1.00 D was 76.7%, 80.0%, and 80.0% using Haigis-L, Shammas-PL, Barrett True-K formula, respectively (17). Future studies should focus on a large number of eyes.

The results from our study showed the Barrett True-K formula to have the smallest median absolute refraction prediction error and the greatest percentage of eyes within ±0.50 D and ±1.00 D of the refractive prediction error. We speculate that the reasons for this are as follows: modified keratometry and the Double-K solution can make keratometry closer to the true keratometric power, and the Barrett Universal II formula can increase the accuracy of the IOL power calculation, although the mathematical formula behind this method has not been published. Our results show that the Barrett True-K formula can achieve the most accurate IOLs calculation.

One limitation of this study is that the three formulas used are calculation methods for eyes without historical data. There are also methods for calculating the IOL power in eyes with historical data, the accuracy of which we will compare in future research. The second limitation is the study’s retrospective design. However, all data was collected following stringent guidelines, which probably makes retrospective data more robust. The third limitation is the small sample size. A larger number of eyes should form the basis of future studies. Finally, some new methods which differ from the traditional principles, such as intraoperative aberrometry (15,29) and ray-tracing (30,31), should be applied for calculating the IOL power in eyes that have previously undergone a myopic corneal refractive operation. However, we were unable to access to the instruments required to perform those methods.

Reporting Checklist: The authors have completed the STROBE reporting checklist. Available at http://dx.doi.org/10.21037/atm-20-4624

Conflicts of Interest: All authors have completed the ICMJE uniform disclosure form (available at http://dx.doi.org/10.21037/atm-20-4624). The authors have no conflicts of interest to declare.

Ethical Statement: The authors are accountable for all aspects of the work in ensuring that questions related to the accuracy or integrity of any part of the work are appropriately investigated and resolved. All procedures performed in this study involving human participants were in accordance with the Declaration of Helsinki (as revised in 2013). The study was approved by the Institutional Review Board (IRB) of Beijing Tongren Hospital (NO.: TRECKY 2020-027). Because of the retrospective nature of the research, the informed consent is not required.