Metabolic syndrome (MetS), first identified as a syndrome in 1988, is increasingly affecting the health of many people around the world (1,2). It is identified as a series of metabolic disorders, including hypertension, impaired glucose tolerance, insulin resistance, high level of serum triglyceride (TG), low level of high-density lipoprotein (HDL), and abdominal obesity (3). There is no authoritative diagnostic criterion of MetS to date. Nowadays the most commonly used criterion defines MetS as at least three of the following characteristics: abdominal circumference ≥88 cm, TG ≥1.70 mmol/L, HDL cholesterol (HDL-c) <1.29 mmol/L, blood pressure (BP) ≥130/85 mmHg, and fasting blood glucose (BG) ≥5.6 mmol/L (4). The purpose of MetS treatment nowadays is to prevent the occurrence of complications through weight loss, reducing insulin resistance and improving blood lipid disorders.

The prevalence of MetS varies according to the age and gender of people and the development level of regions (5). As we know, normal pregnancy is a process consisting of pro-inflammatory, pro-thrombotic, insulin resistant, and hyperlipidemic states (6). All these states are like the metabolic disorders of MetS, potentially accelerating the development of MetS. It has been reported that the prevalence of MetS in pregnant and puerperal women were 12.4% and 29%, respectively (7,8). Moreover, MetS increase the risk of adverse pregnancy outcomes in pregnancy. More than half of pregnant women with MetS in early stages were found by Grieger et al. to develop at least one pregnancy complication, while only a third of women without MetS developed a pregnancy complication (9). There is an urgent need to figure out related risk factors of MetS in pregnancy to prevent MetS and improve pregnancy outcomes.

Several risk factors have been found for the development of MetS, including obesity. Obesity or overweight has been identified to be extremely associated with MetS by several studies (10-12), acting as one of the most important diagnostic criteria. Besides, some novel risk factors have been discovered in recent years, of which Helicobacter pylori (H. pylori) infection is one of the most concerned. H. pylori infection, one of the most common infections, affects over 50% population globally, as reported (13). It is initially regarded as an essential risk factor of chronic gastritis, peptic ulcers, and gastric cancer (14). In recent decades, the role of H. pylori as an accelerator of MetS is declared as well. In 2008, Gunji et al. performed a complete medical survey among a large Japanese population and found that H. pylori infection was significantly associated with MetS (15). Afterward, increased studies revealed the association between H. pylori infection and MetS in different groups of people (16-19). However, the effect of H. pylori infection on MetS in pregnant women is still unclear.

We present the following article in accordance with the STROBE reporting checklist (available at http://dx.doi.org/10.21037/atm-20-4863).

Our study was a prospective cohort study of pregnant women admitted to the Wuxi People’s Hospital between July 2017 and October 2018. All pregnant women who signed informed consent were enrolled in this study. Women were excluded from this study on the following criteria: pregnant women with multifetal pregnancy, pre-existing diabetes mellitus, pre-existing hypertension, high risk for preeclampsia, multiple terminations or miscarriages, already known fetal anomaly or abnormal karyotype, increased risk for depression, disability, malignant diseases, severe malnutrition, recent surgery or invasive procedure, and taking supplements or drugs which may modify the results of this study. For the exclusion criterion, 320 pregnant women were enrolled in this study. The study was performed in compliance with the ethical principles of the Declaration of Helsinki (as revised in 2013) and had been approved by the ethics committee of Wuxi People’s Hospital.

All enrolled patients were followed up until the last baby was born in August 2019. Each pregnant woman received at least 10 antepartum examinations every 2–4 weeks during the follow-up period. Waist circumference (WC), BP, and the levels of serum TG, HDL-c, and fasting BG were measured and recorded during the antepartum examination. MetS are defined according to an earlier study (9). WC >80 cm is a prerequisite for MetS, plus any 2 of the following variables: TG ≥1.70 mmol/L, HDL-C <1.29 mmol/L, systolic BP ≥130 mmHg or diastolic BP ≥85 mmHg, and fasting BG ≥5.6 mmol/L.

Some other pregnancy outcomes were recorded, including gestational diabetes mellitus (GDM), preeclampsia, spontaneous preterm birth (SPB), fetal growth restriction (FGR), and uncomplicated pregnancy. GDM was diagnosed as fasting BG ≥5.1 mmol/L or a 2-hour oral glucose tolerance test ≥8.5 mmol/L. Preeclampsia is diagnosed as systolic BP ≥140 mmHg or diastolic BP ≥90 mmHg on at least 2 occasions before the onset of labor, with either proteinuria or any multisystem complication of preeclampsia. SPB is defined as spontaneous delivery before 37+0 weeks’ gestation. FGR defined as newborns with a birth weight under 10th centiles. Uncomplicated pregnancy is defined as a normal pregnancy, delivered at ≥37 weeks and ≤42 weeks, with an appropriate for gestational age baby (neonates with birth weight between 10th and 90th centiles).

Stata (version 15.0) was used for all data analyses. All enrolled women in this study were divided into two groups on whether they had H. pylori infection or not (78 women in infection group and 242 women in non-infection group). Besides, the two groups were then divided into two subgroups on whether their BMI was more than 24 or not (211 women in BMI <24 group and 109 women in BMI ≥24 group). Continuous variables were reported as the means with standard deviations and analyzed with use 2-tailed T-tests for the comparisons between pregnant women of two groups or subgroups. Besides, categorical variables were reported as percentages and analyzed using χ2 tests. Univariate and multivariate logistic regression analysis was then performed to explore the relationship between H. pylori infection and MetS or other adverse pregnancy outcomes. The level of significance was set at the conventional level of α=0.05. All P values were two-sided, and P<0.05 was considered statistically significant. 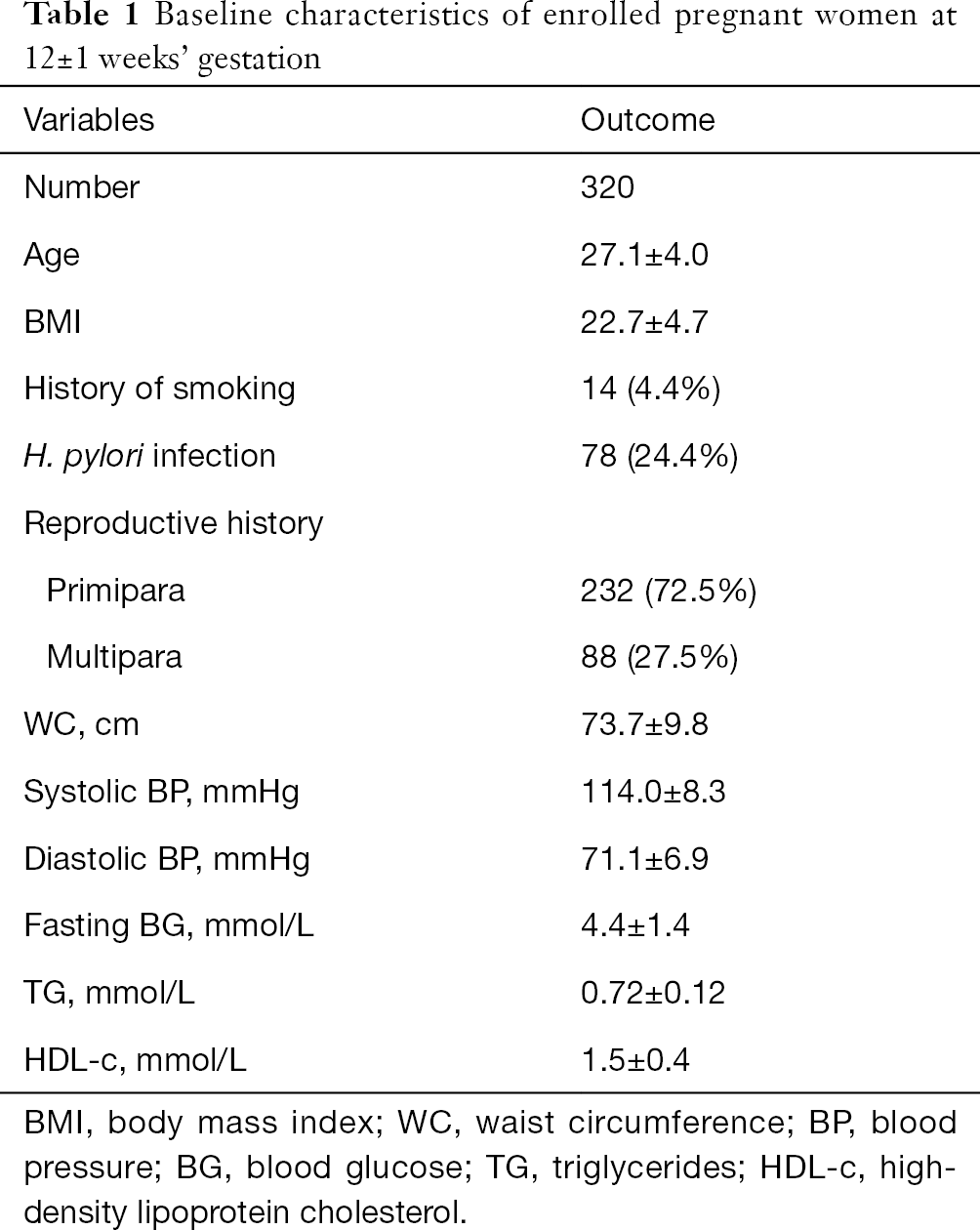 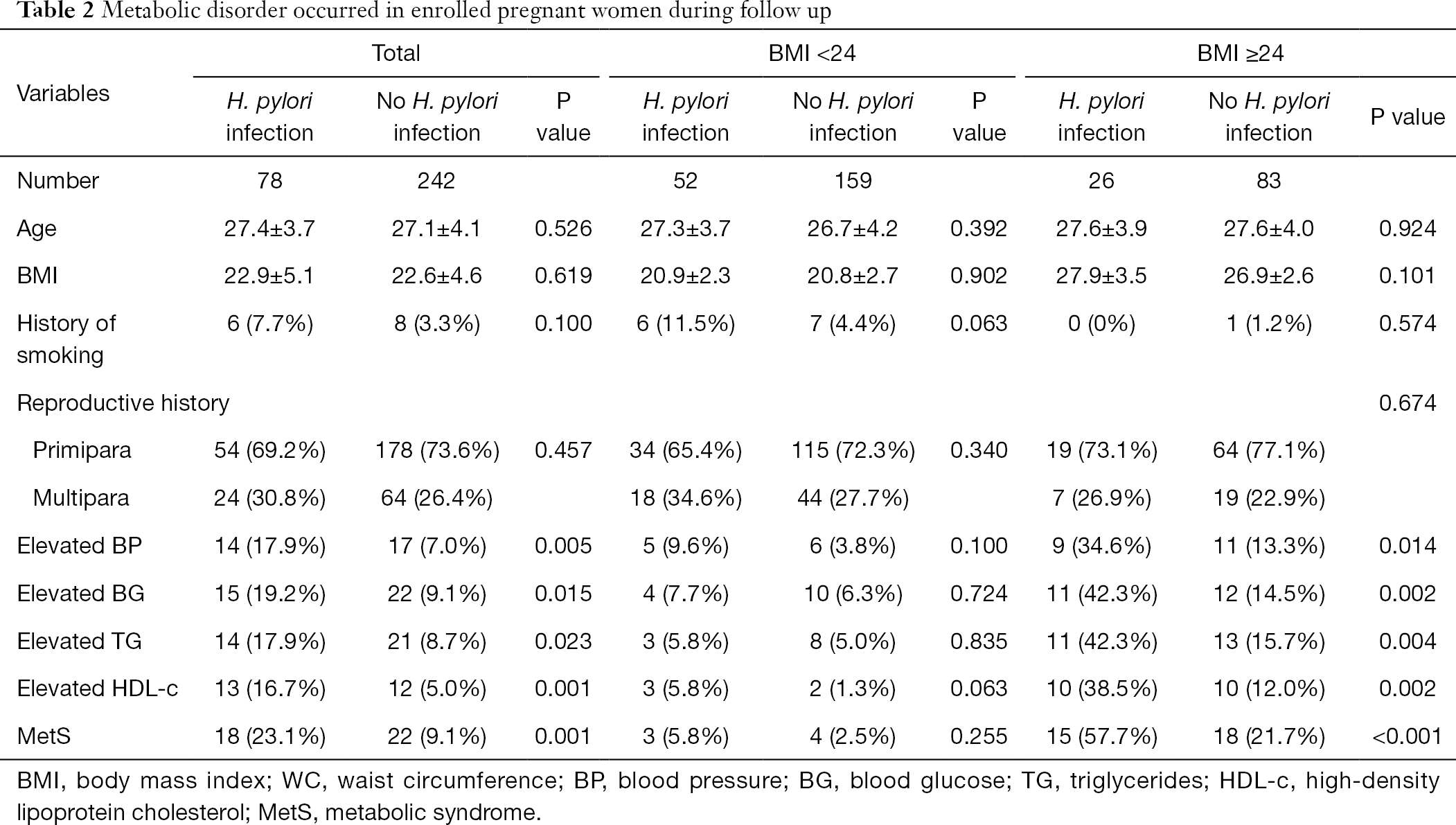 Multivariable logistic regression analysis was performed to figure out the risk factors of MetS and elevated metabolic parameters, as shown in Table 3. After adjusting age, history of smoking and reproductive history, H. pylori infection, and high BMI were revealed to be the most critical risk factors of all studied metabolic disorders. 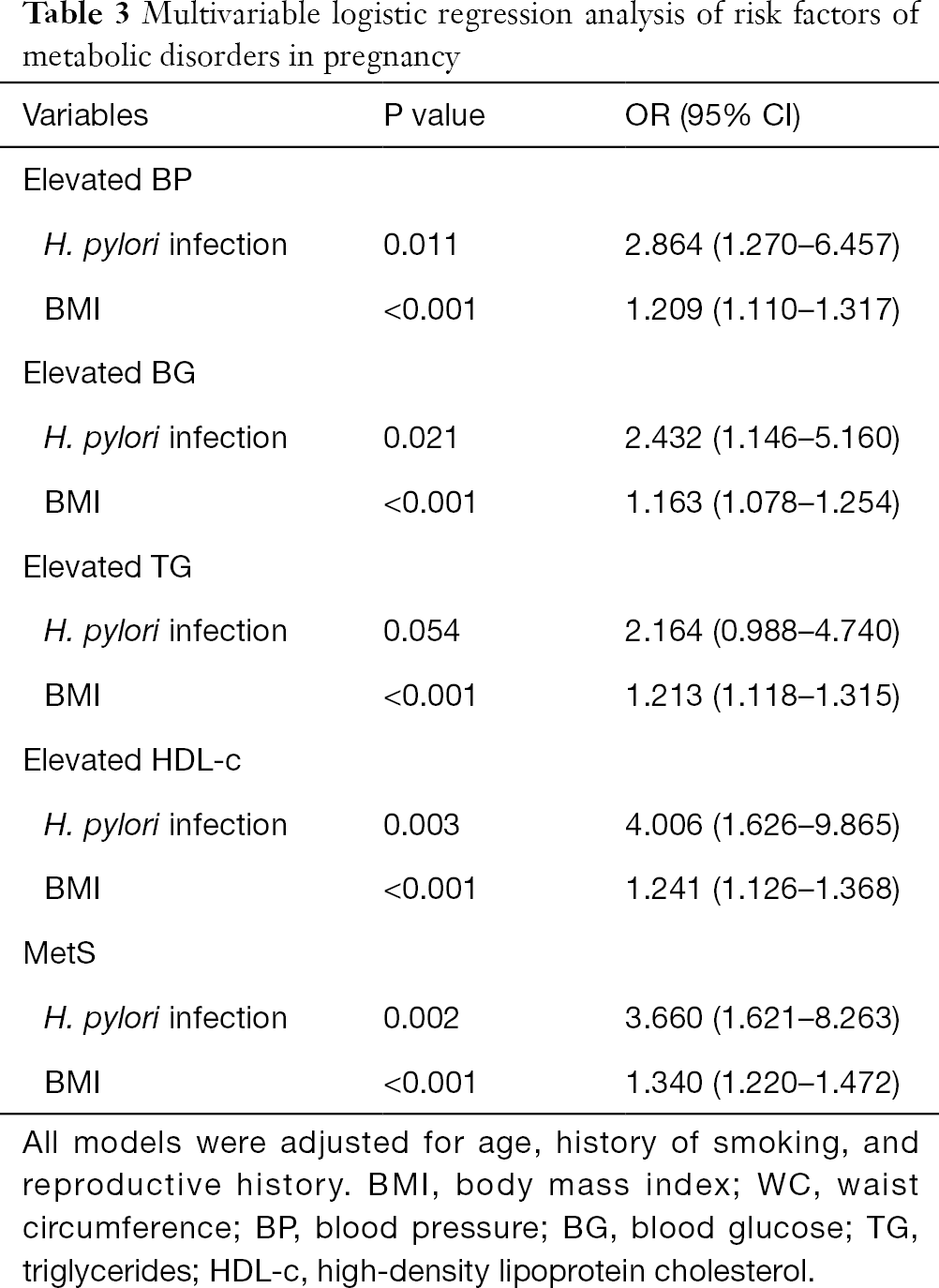 Some other pregnancy outcomes, including GDM, Preeclampsia, SPB, FGR, and uncomplicated pregnancy, were then recorded in this study and showed in Table 4. It was revealed that H. pylori infection increased the incidence of GDM and preeclampsia and decreased the incidence of an uncomplicated pregnancy, especially in the high BMI subgroup, like the results in Table 2. However, SPB and FGR in this study showed no significant relationship with H. pylori infection neither in high BMI subgroup nor in low BMI subgroup.

In the results of multivariable logistic regression analysis, H. pylori infection and high BMI were considered risk factors of GDM and preeclampsia (Table 5). However, no variable in this study was found to be related to SPB. High BMI, rather than H. pylori infection, is an independent risk factor of both FGR and uncomplicated pregnancy. Interestingly, the results here demonstrated that H. pylori infection and age may be associated with the decrease of an uncomplicated pregnancy, though P value indicated no significant relationship between them (P=0.076 and 0.069, respectively). 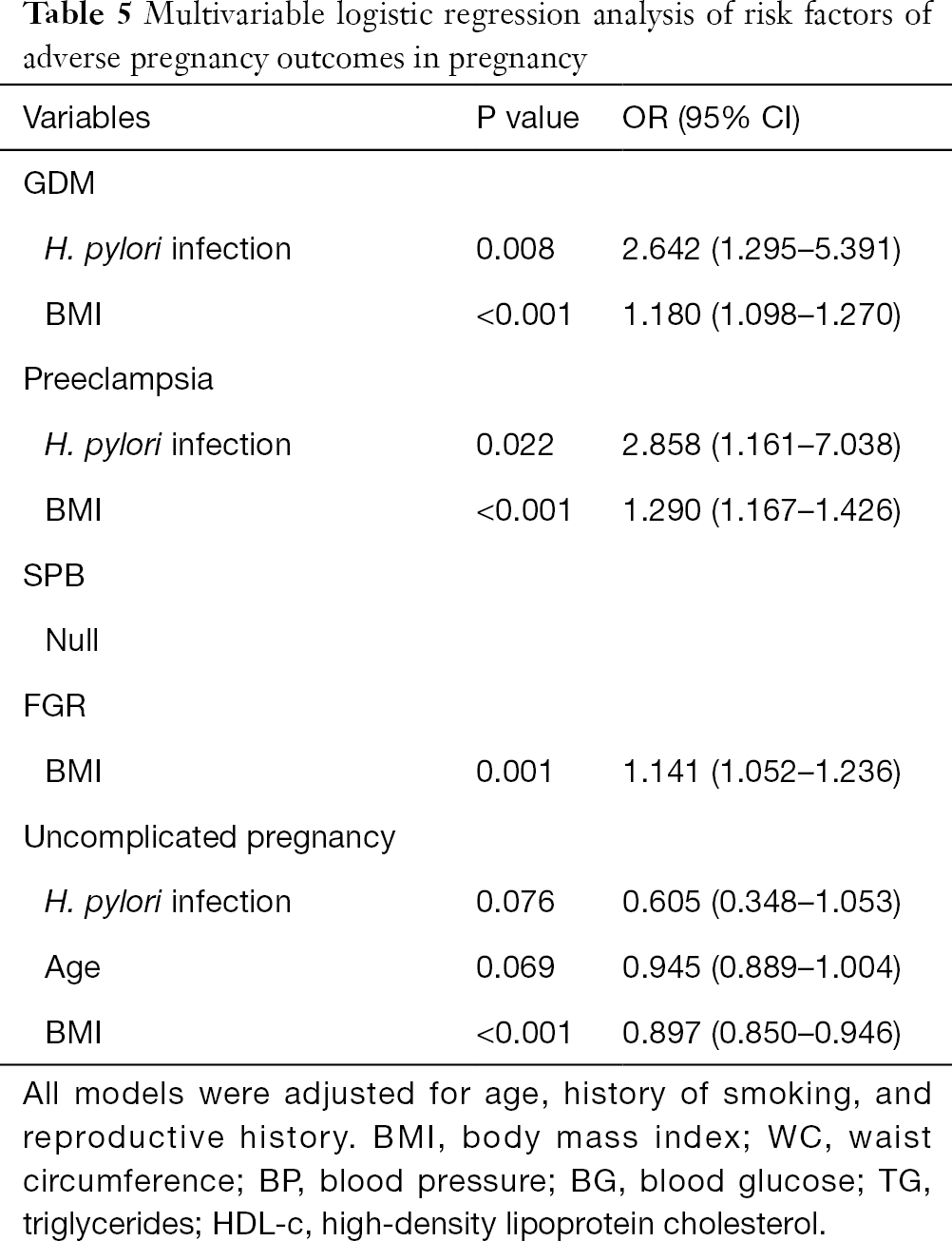 The limitations of our study should be noted. First, there are still some confounding factors that may affect the results existing in this study, but we did not get them, including physical activity and socioeconomic index. Second, the interval of follow up in this study is 2 to 4 weeks so that we cannot record metabolic disorders or adverse pregnancy outcomes if they occur during the interval. Third, insulin resistance is a crucial marker of MetS, yet we did not enroll it in this study, which may affect the results.

Reporting Checklist: The authors have completed the STROBE reporting checklist. Available at http://dx.doi.org/10.21037/atm-20-4863

Conflicts of Interest: All authors have completed the ICMJE uniform disclosure form (available at http://dx.doi.org/10.21037/atm-20-4863). The authors have no conflicts of interest to declare.

Ethical Statement: The authors are accountable for all aspects of the work in ensuring that questions related to the accuracy or integrity of any part of the work are appropriately investigated and resolved. The study was performed in compliance with the ethical principles of the Declaration of Helsinki (as revised in 2013) and had been approved by the ethics committee of Wuxi People’s Hospital. All pregnant women signed informed consent.