Sjögren’s syndrome (SS) is an autoimmune disease characterized by the hypofunction of the lacrimal and salivary glands (1). Interstitial lung disease (ILD) is one of the most common extraglandular manifestations of SS (2). Major complications include Raynaud phenomenon, arthralgias, fever, and rash. Although the management of Sjögren’s syndrome-related interstitial lung disease (SS-ILD) varies significantly between different clinical situations, immunosuppressive therapy serves as the primary treatment option (1,3). Lung transplantation has been considered in patients with advanced pulmonary involvement (3), but the indications remain controversial.

Here we present a 65-year-old male SS-ILD patient with initial symptoms of limb edema and acute respiratory failure. He was treated with immunosuppressor, respiratory support, dialysis, immunomodulatory and anti-inflammatory medications, but no significant response was shown to anti-fibrotic treatments. Double lung transplantation was thus indicated considering the irreversible interstitial changes in both lungs. Based on an analysis of the short-term outcomes and a review of the published literature, we aimed to discuss the safety and feasibility of surgical treatment for this autoimmune disease and the effects of enhanced recovery after surgery (ERAS) on a critical elderly patient. We present the following case in accordance with the CAse REport (CARE) reporting checklist (available at http://dx.doi.org/10.21037/atm-20-3516).

All procedures performed in this case involving human participants were in accordance with the Declaration of Helsinki (as revised in 2013). Written informed consent was obtained from the patient for publication of this manuscript and any accompanying images.

A 65-year-old male patient presented with limb edema for ten days and was initially diagnosed with nephrotic syndrome (NS). He was admitted to Shanghai Jiao Tong University Medical School Affiliated Ruijin Hospital in July 2018. He reported neither dyspnea nor chest tightness in the outpatient clinic. His medical history included diabetes, hypothyroidism, hypertension, ventricular premature contractions, benign prostatic hypertrophy, and urinary calculus. No immunosuppression or steroids were prescribed before this admission. He had a 30-pack-year smoking history but quit six months ago. Shortly after his hospitalization, he developed oliguria and had a progressive rise in his creatinine, followed by fever, dyspnea, chest tightness, and hypoxia, with desaturation to 85%. The patient was transferred to the intensive care unit (ICU) with acute kidney injury and acute respiratory failure.

Serologic testing revealed positive antinuclear antibodies (ANA) (+), anti-ribonucleoproteins (RNP) antibody (++), anti-Sm antibody (±) and anti-SSA antibody (±). A diagnosis of SS was put forward according to the patient’s thyroid dysfunction, NS, and manifestations of ILD based on the chest computed tomography (CT) (Figure 1). These results were further supported by testing his lacrimal and salivary gland function. Thus, the patient was treated with glucocorticoids and cyclophosphamide (CTX), supplemented by continuous renal replacement therapy (CRRT), non-invasive ventilation, and anti-inflammatory and immunomodulatory medications. 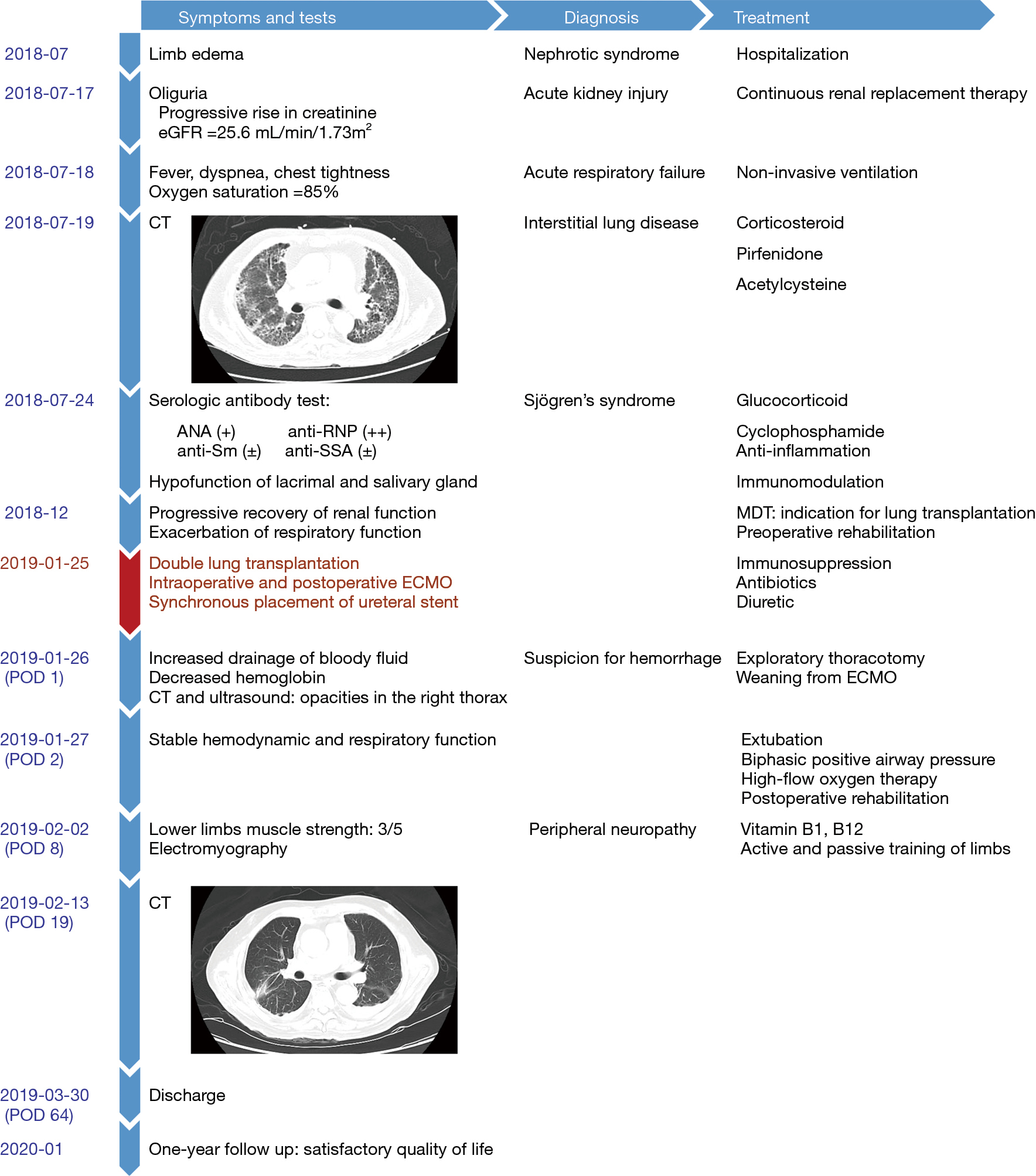 The patient’s renal function gradually recovered, but he continued to require respiratory support. The PaO2/FiO2 ratio remained at 100–120 mmHg with persistent diffusion and interstitial changes bilaterally. Corticosteroids, pirfenidone, and acetylcysteine were prescribed as anti-fibrotic treatments; however, his respiratory function deteriorated in December 2018. After evaluation by the multidisciplinary lung transplant team, double lung transplantation was recommended, given that his interstitial changes were related to his SS and showed no significant response to treatment.

After obtaining consent, the double lung transplant was performed in January 2019. A healthy, young male killed in a traffic accident was selected as the donor. General anesthesia was followed by placement of a Swan-Ganz catheter to monitor the pulmonary arterial pressure (PAP). Due to pulmonary hypertension (42 mmHg), the transplant was performed using veno-venous extracorporeal membrane oxygenation (V-V ECMO). The left lung was transplanted first with a cold ischemic time of 4.5 hours. After changing the patient to the left lateral position, PAP progressively increased to 60 mmHg, and ECMO was, therefore, converted to veno-arterial-venous (V-A-V) cannulation. The right lung transplantation was then performed with a cold ischemic time of 10.25 hours. The long ischemic time was related to the far distance of the donor lungs as well as the intraoperative conversion to V-A-V ECMO. Left ureteroscopy and placement of a ureteral stent were also synchronously performed to address an obstructing renal calculus, which could be a risk factor for urinary tract infection after transplantation. The patient received 14 units of red cells and 1,500 mL of fresh frozen plasma intraoperatively. With a normal PAP but unstable oxygen saturation after surgery, the patient returned to the ICU on V-V ECMO. The activated clotting time was kept at 250 to 300 seconds and checked every 30 minutes.

On the first postoperative day (POD 1), the patient underwent an exploratory thoracotomy due to hemorrhaging from the right chest. Bleeding was found from a bronchial artery at the right bronchial anastomosis. Four units of red cells, one unit of platelets, and 800 mL of plasma were transfused during the second operation. ECMO was weaned off intraoperatively due to adequate oxygen saturation. After returning to the ICU on a ventilator, his hemodynamic and respiratory status remained stable without further signs of hemorrhaging. On POD 2, he was extubated and supported with biphasic positive airway pressure and high-flow oxygen therapy. Neither immune rejection nor primary graft dysfunction was observed after transplantation.

Regular multidisciplinary discussions were organized, and the management strategy was adjusted according to the specific course after transplantation. Several bronchoscopies were conducted in the ICU for sputum clearance and assessment of the anastomoses. Tacrolimus and glucocorticoid were prescribed to prevent allograft rejection, and intravenous immunoglobulin was prescribed as an immunomodulator for his pre-existing SS. The patient’s renal function and urine volume were supported at a stable level using diuretics. Postoperative CT presented no significant pulmonary effusion (Figure 1) while indices of procalcitonin (PCT) and C-reactive protein (CRP) gradually declined. However, carbapenem-resistant Klebsiella pneumoniae (CRKP) was persistently detected in the sputum culture. Regarding the presence of CRKP before the patient’s transplant, the postoperative antibiotic coverage was progressively narrowed from a combination of vancomycin, caspofungin, meropenem, amphotericin B and polymyxin to a triple therapy of fosfomycin, polymyxin and amphotericin B. Afterwards, the patient’s general condition continued to improve with liver protection, electrolyte stabilization, inhibition of acid secretion, regulation of sleep and appetite, and relief of oral ulcers.

Following an ERAS program, the patient went through rehabilitation training both before and after surgery. A nasogastric tube was placed before transplantation to allow for early enteral nutrition post-surgery. After an assessment of the deglutition to decrease the risk of aspiration, especially with the high incidence of dysphagia in SS (4), the feeding tube was removed, and the patient started with oral intake during the early postoperative period. In terms of respiratory function, the physical therapist utilized the Spiro-ball inspiratory trainer and the Acapella device for lung recruitment and expectoration. Meanwhile, weakness of the lower limbs was observed, and his muscle strength remained at 3/5. Peripheral neuropathy was considered based on electromyography, which could be related to the patient’s history of diabetes, immunosuppressive therapy, and autoimmune disease. Vitamin B1 and B12 were, therefore, added. Breathing and cough training, active and passive training of his limbs, balance training from sitting to standing and walking, and joint mobilization were practiced once a day, five days per week. Under the ERAS program, the patient was soon able to stand for 5 minutes with the help of a walker.

At discharge on POD 64, the patient reported neither respiratory symptoms nor limb edema, but his lower limb and upper extremities were still affected by xerosis. His muscle strength recovered to 4/5 and enabled him to walk back and forth a short distance on his own. At 6-month follow-up, the patient was able to walk normally without any help, and at 1-year follow-up, he was satisfied with the quality of life and treatment progress.

Approximately 10–20% of primary SS patients develop ILD during the course of their disease (5-7). Pulmonary manifestations can be non-specific, dyspnea (62%) and cough (54%) being the leading symptoms (5). Despite the lack of high-quality randomized clinical trials, immunosuppression remains the primary treatment strategy in ILD associated with SS and other connective tissue diseases (1,3,8). Lung transplantation is not the first choice of treatment for individuals with SS-ILD, which is a relative contraindication at many centers (3). Transplants can be considered in SS patients with advanced pulmonary involvement, but this remains controversial in the absence of adequate evidence.

A systematic search on Medline was conducted in September 2019 by using the terms ‘lung transplantation’ and ‘Sjogren’s Syndrome’. Only two articles were identified to have reported lung transplantation in SS-ILD patients (9,10). Major concerns have been raised about the impact of pre-existing autoimmune diseases and post-transplant outcomes, including the risk of rejection with immunologic dysregulation and complications caused by immunosuppression after transplantation (3). However, a cohort study of patients with non-scleroderma connective tissue-related lung disease (n=275, including 26 cases of SS) and idiopathic pulmonary fibrosis (n=6,346) showed there to be no significant differences in adjusted survival (P=0.24), acute rejection (P=0.77), bronchiolitis obliterans syndrome (P=0.21), or other organ dysfunction after transplantation between the two groups (9). Another publication reported the survival outcome of 7 SS patients undergoing lung transplantation. The cumulative one-month, six-month, one-year, and three-year survival was 100%, 85.7%, 57.1%, and 57.1%, respectively (10).

As shown in Figure 1, we report a 65-year-old patient suspected of SS with acute respiratory failure and diffuse interstitial lesions in both lungs, where lung transplantation was indicated. Therefore, a multidisciplinary team including nephrology, dermatology, pulmonary, thoracic surgery, urology, anesthesia, transplantation, rehabilitation, neurology, and ICU was established in collaboration with Wuxi People’s Hospital, the largest center of lung transplantation in China, to address the first complex lung transplant in Ruijin Hospital. Although the length of postoperative hospitalization (64 days) was longer than the average length of stay (38 days) after lung transplant at Wuxi People’s Hospital, the ERAS program played an important role in early extubation, pulmonary function recovery, and treatment of peripheral neuropathy. At 1-year follow-up after lung transplant, the patient was alive with a satisfactory quality of life. Our experience provides evidence for the feasibility and safety of lung transplantation for advanced SS, but it should be noted that this newly diagnosed patient did not receive immunosuppression or steroids at baseline. These results might be different from most of the patients that are diagnosed with SS, whose wound healing and allograft rejection could be affected by long-term use of immunosuppressants and corticosteroids.

This case report describes the details of lung transplantation in a patient with advanced SS-ILD. Important considerations include the indications for and timing of transplantation, the effects of long-term immunosuppression on wound healing, and extrapulmonary organ dysfunction.

This case report suggests that lung transplants can be safely performed in patients with advanced SS-ILD. SS-ILD should not be a contraindication to transplantation; however, patients with advanced pulmonary involvement should be carefully selected after a multidisciplinary evaluation. Long-term follow-up and further clinical studies are needed in the future.

Reporting Checklist: The authors have completed the CARE reporting checklist. Available at http://dx.doi.org/10.21037/atm-20-3516

Conflicts of Interest: All authors have completed the ICMJE uniform disclosure form (available at http://dx.doi.org/10.21037/atm-20-3516). Dr. JL reports personal fees from Intuitive Surgical, outside the submitted work; HL reports grants from National Natural Science Foundation of China, grants from Shanghai Municipal Education Commission-Gaofeng Clinical Medicine Grant Support, grants from Shanghai Municipal Commission of Health and Family Planning Outstanding Academic Leaders Training Program, during the conduct of the study. The other authors have no conflicts of interest to declare.

Ethical Statement: The authors are accountable for all aspects of the work in ensuring that questions related to the accuracy or integrity of any part of the work are appropriately investigated and resolved. All procedures performed in this case involving human participants were in accordance with the Declaration of Helsinki (as revised in 2013). Written informed consent was obtained from the patient for publication of this manuscript and any accompanying images.