Lung cancer remains the leading cause of deaths from cancer worldwide. Of the 280,820 estimated patients to be diagnosed in the United States in 2020, two-thirds of those patients will be considered unresectable (1). Of the one-third of patients who are considered surgical candidates, many will relapse, with recurrence rates as high as 70% in the stage III setting (2). The significant risk of developing metastatic disease after curative resection necessitates the role for adjuvant therapy to treat potential micrometastases and reduce the chance of recurrence.

When the original practice-guiding adjuvant trials were designed, molecular features including tissue histology, the presence of actionable mutations like Epidermal Growth Factor Receptor (EGFR) mutation, and the expression of program death ligand-1 (PD-L1) were not yet known as essential tumor characteristics. Therefore, the role of immunotherapy and targeted therapy in the adjuvant setting has yet to be defined.

While targeted therapy with a tyrosine kinase inhibitor (TKI) is standard of care first-line treatment for patients with advanced EGFR-mutated non-small cell lung cancer (NSCLC), there is less consensus regarding their utilization in the adjuvant setting after radical surgical resection in patients with stage I-III EGFR-mutant NSCLC.

However, the results of the EVAN and ADJUVANT trials, published in 2018, indicated an improvement in disease free survival (DFS) for patients receiving adjuvant EGFR-TKI therapy for 2 years compared with adjuvant standard-of-care platinum doublet chemotherapy (8,9). These trials did not allow for adjuvant chemotherapy in the TKI arm or adjuvant radiation therapy in either arm. The SELECT trial, a single-arm study published in 2019 (10), demonstrated an impressive DFS rate (2-year: 88%, 5-year: 56%) with the use of adjuvant EGFR-TKI (erlotinib) for 2 years following standard platinum doublet adjuvant chemotherapy. The SELECT trial, unlike EVAN and ADJUVANT, permitted adjuvant radiation therapy. The details of these trials are listed in Table 1. 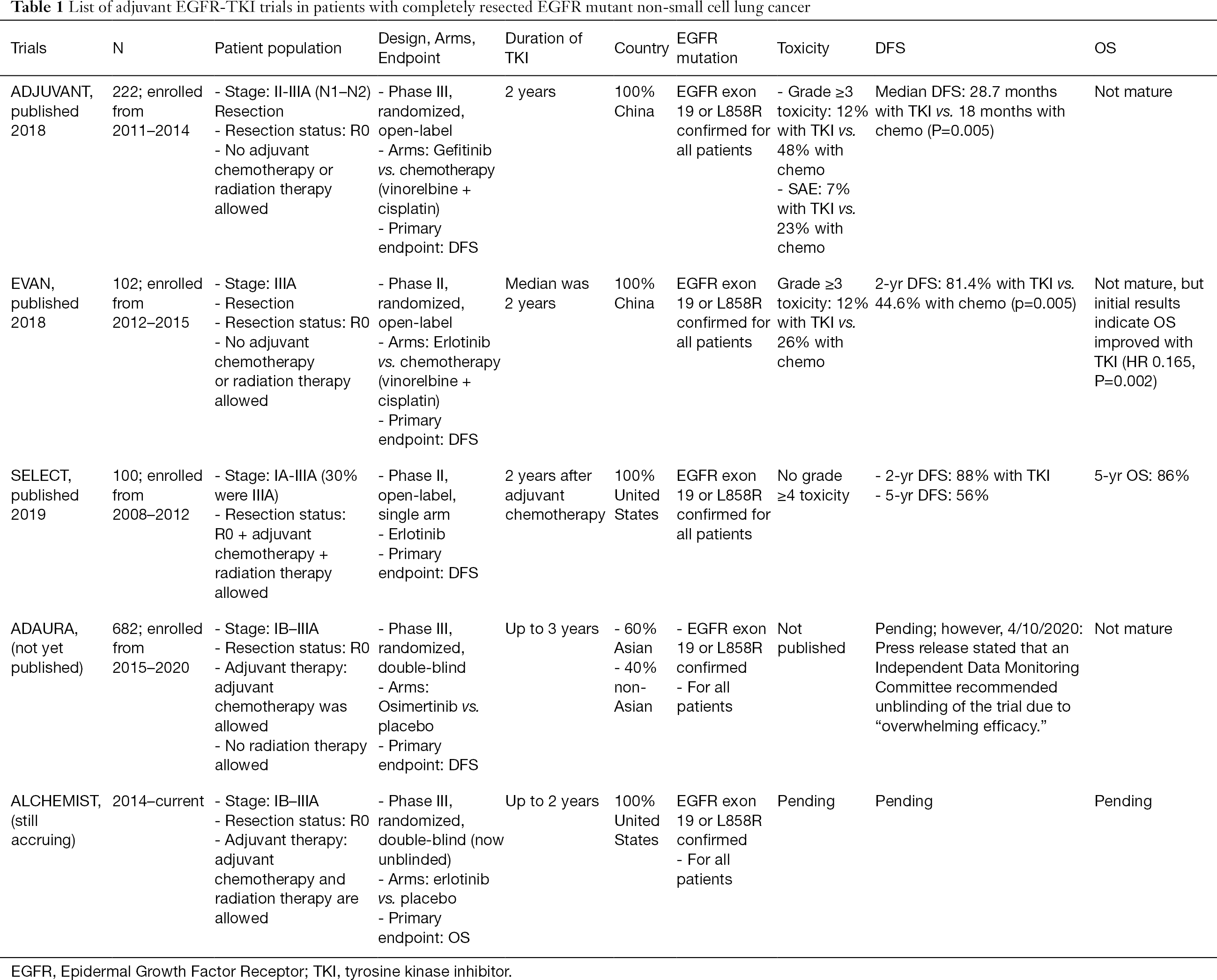 With this additional data, the “Society for Translational Medicine consensus on postoperative management of EGFR-mutant lung cancer” was recently published in Translational Lung Cancer Research, aiming to provide treatment recommendations in the adjuvant setting. This important consensus addresses the need to routinely test for driver mutations, the use and duration of adjuvant therapy, surveillance imaging, and the work-up and management for relapsed disease (11). A panel of Chinese experts reached consensus on eight topics and scored each consensus statement based upon the level of evidence (Category 1 = high-level evidence; Category 2A = lower-level evidence, but uniform consensus that the intervention is appropriate; Category 2B = lower-level evidence, but some consensus that the intervention is appropriate; Category 3 = major disagreement that the intervention is appropriate) and the strength of recommendations [strong vs. weak, according to the Grading of Recommendations, Assessment, Development and Evaluation (GRADE) system]. All eight consensus statements were Category 1-2B and “strong” recommendations.

To obtain a more comprehensive consensus, 11 experts outside China were invited to comment on four controversial topics: the need for EGFR mutation profiling after curative-intent resection, whether an EGFR-TKI can replace chemotherapy in patients requiring adjuvant therapy, the necessity for regular surveillance for brain and bone metastases in patients with EGFR mutations after radical resection, and the role of osimertinib in the relapsed setting. Interestingly, the only consensus opinion (with 10 of the 11 experts agreeing) was regarding the superiority of osimertinib as the TKI of choice, given the findings of the FLAURA trial (12). Consensus was lacking (with only 5 or 6 of the 11 non-Chinese experts agreeing) on the other three questions.

The role of frontline osimertinib for patients with stage IV NSCLC harboring an EGFR sensitizing mutation is clear. The FLAURA trial, a large phase III double blind prospective trial, randomized 556 patients with treatment naive, EGFR mutation-positive NSCLC to receive osimertinib vs. gefinitib or erlotinib. The investigators found that the osimertinib arm had improved progression free survival (PFS) as well as overall survival (OS) with similar safety profiles (12). This benefit in PFS was also demonstrated in the subset analysis of patients enrolled at Asian sites (13).

Additionally, a recent press release on the ADAURA trial (NCT02511106), a large randomized phase III study evaluating adjuvant osimertinib vs. placebo in completely resected (R0) patients with an activating EGFR mutation, announced early unblinding of the study due to “overwhelming efficacy” in the adjuvant osimertinib arm (14). The ADAURA trial, importantly, is using osimertinib as the adjuvant EGFR-TKI of choice for up to 3 years, is allowing adjuvant chemotherapy, and is including both Asian and non-Asian patients. The results are eagerly awaited.

Comments on each consensus statement

Consensus Statement #2 indicates that the decision for adjuvant therapy should be made based on risk-stratification. While risk-stratification is an integral part of the discussion, there are many other factors that contribute to offering adjuvant therapy and this important question warrants a multidisciplinary shared decision-making process involving the patient. For patients with earlier stage disease (Stage IA–IB), it is unclear if patients benefit from adjuvant TKI therapy due to their relative lower risk for recurrence given their early pathologic stage. Although the SELECT and ADAURA trials included stage I patients, the ADJUVANT and EVAN trials did not. Until adjuvant EGFR-TKI therapy is specifically studied in patients with early-stage resected disease, the use of adjuvant EGFR-TKI therapy in these early-stage patients is not routinely recommended.

Consensus Statement #3 indicates that there is level 1 evidence for the use of adjuvant EGFR-TKI to achieve longer DFS compared to chemotherapy. For patients with a poor expected tolerance to chemotherapy, the use of adjuvant EGFR-TKI alone is reasonable. For patients who are good candidates for chemotherapy, the impact of replacing adjuvant chemotherapy with an EGFR-TKI vs. treatment with adjuvant chemotherapy followed by EGFR-TKI is unclear. ADJUVANT and EVAN, both published 2018, evaluated chemotherapy vs. TKI in the adjuvant setting; however, the study cohorts were limited to the Chinese population and they did not permit radiation. While the reported 2-year DFS benefit is exciting, it is not a surrogate for OS, for which the data is not mature. We eagerly await these results. Adjuvant chemotherapy improves overall survival in high-risk patients with resected NSCLC and is considered standard of care (15). Therefore, the potential detriment of omitting adjuvant chemotherapy in these high-risk patients needs to be considered. To gain further clarity on this question, we must await the results of the ADAURA trial as well as the ALCHEMIST trial (NCT02193282) randomizing erlotinib vs. observation in patients with completely resected (R0) stage IB to IIIA EGFR-mutant NSCLC after standard postoperative therapy (14,16).

Consensus Statement #4 indicates that all three adjuvant systemic therapy options (chemotherapy alone, EGFR-TKI, or chemotherapy plus EGFR-TKI) are reasonable in patients requiring adjuvant therapy. The question of whether an EGFR-TKI can replace chemotherapy is a controversial topic as noted above.

Consensus Statement #5 advises that adjuvant EGFR-TKI treatment should be delivered for at least 2 years. This is appropriate as all published studies aimed for patients to receive treatment for at least this duration. Additionally, in the ADJUVANT and SELECT studies, there were concerns for a downward trend in DFS later than 2 years that could potentially be related to stopping the EGFR-TKI therapy (9,10). For cases of poor tolerance, efforts to adjust the dose of the EGFR-TKI should be considered before discontinuing the therapy.

Consensus Statement #6, which advocates for annual brain MRI scans and annual bone scans, is controversial. While CNS recurrence is commonly seen in patients with an activating EGFR mutation, present National Comprehensive Cancer Network (NCCN) Guidelines for NSCLC recommends surveillance imaging after completion of definitive therapy with CT chest only (17). Brain MRI, PET scans, and bone scans are not routinely recommended. Additionally, the recently published ASCO guidelines on lung cancer surveillance after definitive curative-intent therapy do not recommend brain MRI or PET or bone scans for routine surveillance in patients with stage I-III NSCLC who have undergone curative-intent treatment (18). Neither of the guidelines, however, consider the difference in failure patterns in patients harboring EGFR mutations. In the ADJUVANT study, patients underwent surveillance MRI brain every 6 months and bone scans every 12 months. These scans revealed that, 50% (29/58) of recurrences in the EGFR-TKI arm occurred in the brain and 10% (6/58) occurred in the bone (19). In the chemotherapy arm, 37.5% (21/56) of recurrences occurred in the brain and 16% (9/56) occurred in the bone. Due to the relatively low rate of bone metastases, routine bone scans should not be performed in the surveillance setting. While routine brain MRI surveillance is not recommended after definitive-intent therapy, for EGFR mutant patients, clinicians should have a low threshold for performing CNS imaging when clinically warranted. The early detection of brain metastases could have implications in the radiotherapeutic management of brain metastases, as patients with a limited number of brain metastases are more likely to be candidates for stereotactic radiosurgery techniques.

Consensus Statements #7 and #8 recommend EGFR-TKI therapy as the treatment of choice for salvage therapy and obtaining genetic testing from the prior surgical specimen, re-biopsy, or alternatively, liquid-biopsy when tissue samples are not available, in the setting of recurrent disease. While this is appropriate, it is important to consider the nature and timing of the relapse. If patients relapse while on EGFR-TKI therapy such as gefitinib or erlotinib, then a liquid and tissue biopsy would help to evaluate for other driver mutations, transformations or resistance mutations, such as the well documented T790M resistance mutation status to determine the utility of osimertinib as salvage therapy. If patients relapse after the discontinuation of EGFR-TKI therapy, then retreatment with EGFR-TKI therapy should be considered, as the SELECT trial indicated that recurrences are likely still sensitive to EGFR-TKI therapy (10).

In conclusion, the “Society for Translational Medicine consensus on postoperative management of EGFR-mutant lung cancer (2019 edition)” is a much-needed updated consensus that highlights important topics on the postoperative management of completely resected (R0) EGFR mutant lung cancers. The areas of continued controversy will hopefully become clearer as the overall survival results of the ADJUVANT and EVAN trials mature, and when the DFS results of the ADAURA and ALCHEMIST trials are known.

Provenance and Peer Review: This article was commissioned by the editorial office, Annals of Translational Medicine. The article did not undergo external peer review.