Moyamoya disease (MMD) is an idiopathic intracranial arterial disease characterized by progressive bilateral or unilateral occlusion of the supraclinoid internal carotid artery (ICA) and a hazy network of basal collaterals (1,2). As a rare disease, MMD has been described in all races and ethnicities worldwide especially in Asian countries, particularly Japan, where an incidence up to 0.94 per 100,000 has been reported (3). The main pathological changes in the stenotic segment in MMD include fibrocellular thickening of the intima, causing transient ischemic attacks, cerebral infarction, and intracranial hemorrhage; however, the etiology and pathogenesis of MMD remain unclear (4,5).

Epidemiologic studies have shown that approximately 15% of patients had a family history and accumulating evidence suggests genetic factors as important mediators in the development of MMD (6). A previous genome-wide association study (GWAS) by Kamada et al. had identified Ring Finger Protein 213 (RNF213) at chromosome 17q25 as a susceptible gene related to MMD in Japanese populations (7,8). Subsequent studies in Japan, China, and Korea revealed the close relationship between missense mutations in RNF213 and development of MMD (9-11). RNF 213 p.Arg4810Lys (p.R4810K, rs112735431) was most commonly reported to exhibit a strong association with increased susceptibility to MMD (12). Although the mutation rate of RNF 213 p.Arg4810Lys was similar between Japanese, Korean, and Chinese populations (1.4%, 1.3%, and 1.0%, respectively), MMD-related morbidity is markedly different between these populations (nearly 90% in Japanese, 80% in Koreans, and only 23% in Chinese) (13,14). We speculate that other gene polymorphism in RNF213 may also play a vital role in the disease progress. Therefore, to elucidate the underlying genetic pathogenesis, we investigated five RNF213 polymorphism variants in a cohort of Chinese patients with MMD and compared them with a control population. We present the following article in accordance with the STREGA reporting checklist (available at http://dx.doi.org/10.21037/atm-20-1040).

A hospital-based case-control design was conducted in the present study. Patients were consecutively recruited from February to May, 2018 among inpatients in Beijing Tiantan Hospital. MMD was diagnosed as per the guidelines established by the Research Committee on Spontaneous Occlusion of the Circle of Willis (Moyamoya Disease) of the Ministry of Health and Welfare of Japan (15). All patients were enrolled based on the presence of clinical ischemic or hemorrhagic symptoms in combination with vascular lesions in magnetic resonance imaging (MRI) or magnetic resonance angiography (MRA). Patients with a history of autoimmune disease, brain neoplasm, meningitis, Down syndrome, head trauma, or other serious illness were excluded. Meantime, controls group were enrolled from healthy examination individuals without a familial history of related diseases. All participants’ age, gender and medical history were recorded. The study was conducted in accordance with the Declaration of Helsinki (as revised in 2013). Written informed consents were obtained from all participants in the study, and the study was approved by the Ethics Committee of Beijing Tiantan Hospital. 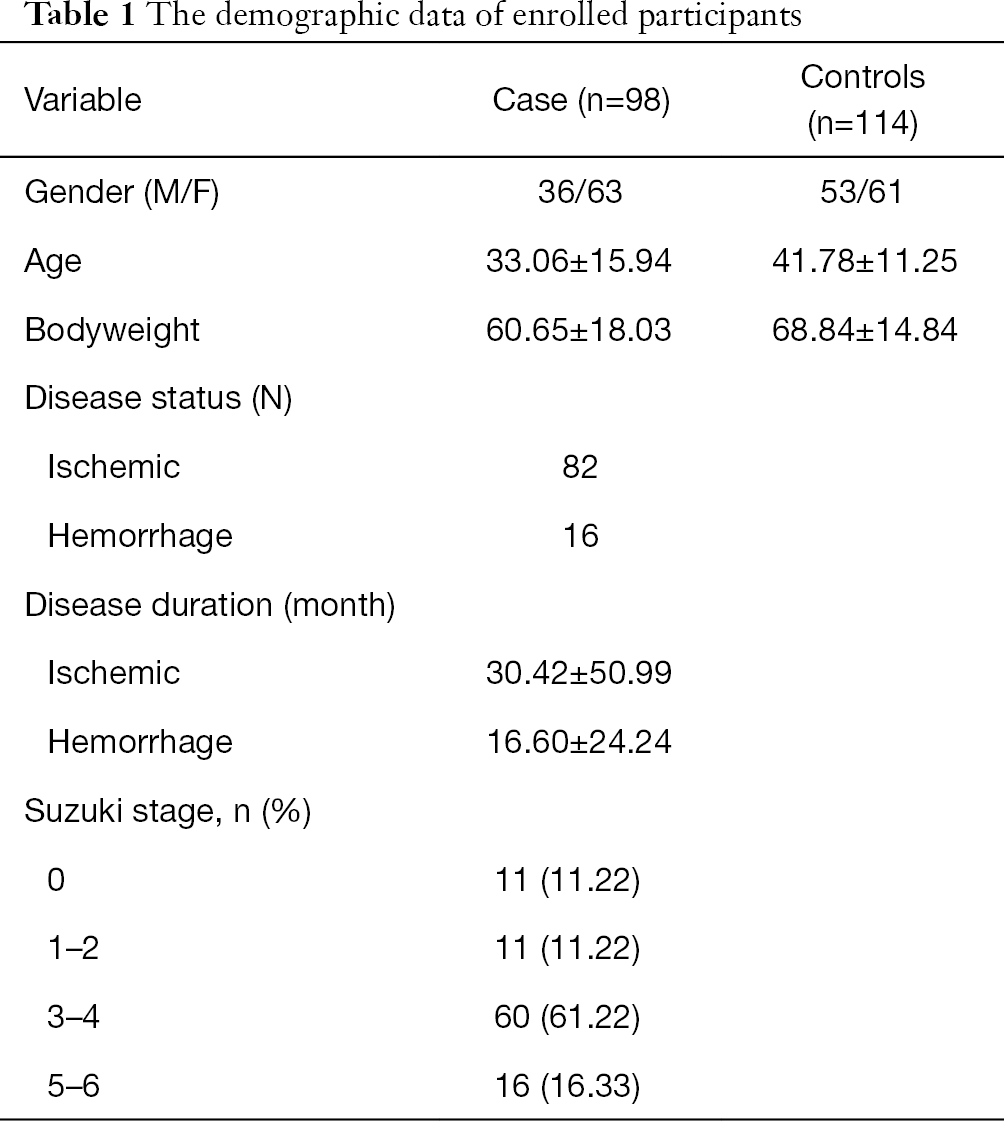 All statistical analyses were performed by SPSS (version 17.0, SPSS Inc., Chicago, USA) and P-Link. Hardy-Weinberg equilibrium (HWE) was assessed using a χ2 test and a P value <0.05 was considered to indicate significant disequilibrium. Differences in genotypic frequencies between groups were calculated by the Pearson’s χ2 test or Fisher’s exact test, as appropriate. Odds ratio (OR) values with 95% confidence interval (CI) were calculated. Univariate and multivariable logistic regression analysis were used to evaluate the impact of clinical variables on RNF213 polymorphism status. Patients’ age and gender were treated as risk factors to be adjusted in the analysis. Haplotype was analyzed using online web tools Haploview and SHEsis (http://analysis.bio-x.cn/myAnalysis.php). All tests were two-tailed, and P<0.05 indicated statistical significant.

The characteristic of the study

The frequencies of genotype and alleles of the RNF213 gene polymorphisms in patients and healthy controls are shown in Table 2. A significant difference was observed between patients and healthy controls in rs9916351, rs9913636, and rs8074015loci under three genotypes and allelic models (P<0.01). In addition, rs112735431 polymorphism significantly differed only under the allelic genotype (P<0.001). No other significant difference was reported under different genotypes in rs35692831 (P>0.05). 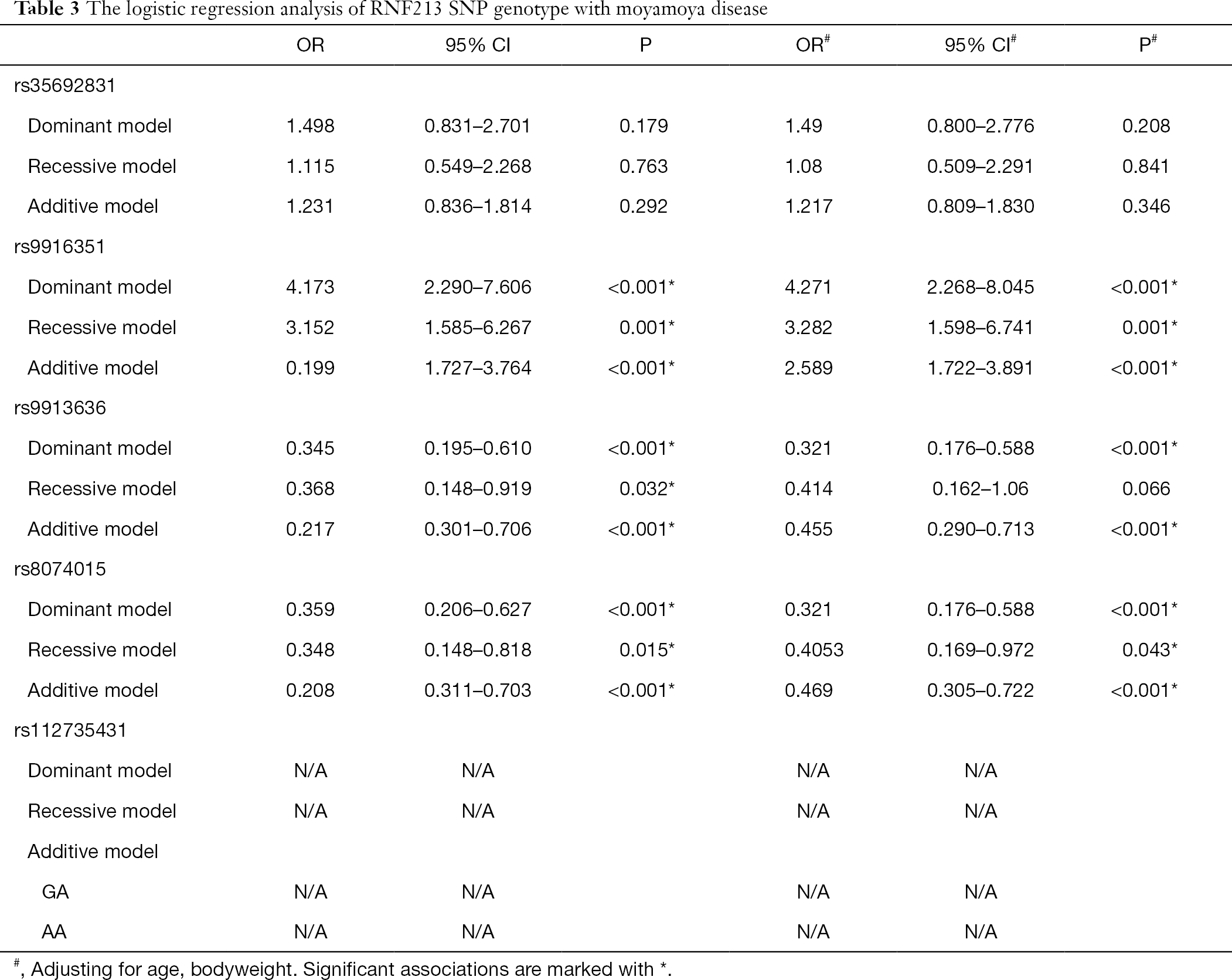 The pairwise linkage disequilibrium D’ values among the five SNPs were calculated for different sample sets. The SNPs with D’ >0.75 in separated sample sets were grouped in the same block, and rs9913636-rs8074015 was identified as one haplotype block (Figure 1). In this block, one haplotype “GACG” showed significant association with MMD (Table 4). 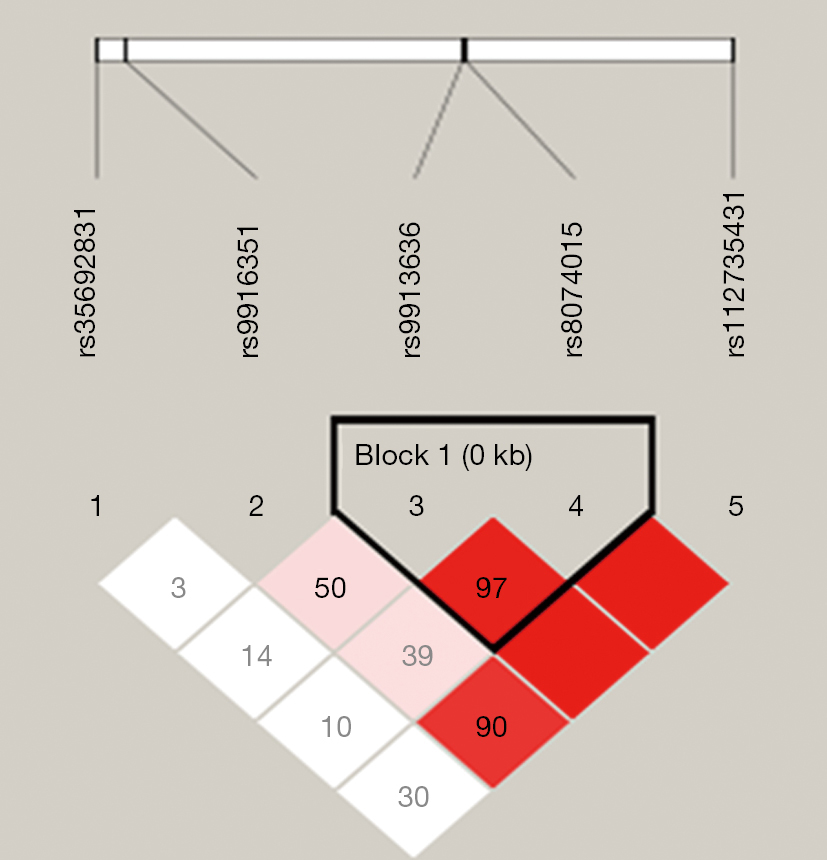 MMD was considered as a chronic cerebrovascular disorder since it was first described by Shimizu and Takeuchi in 1955 in Japan (16). Not until 2011, Kamada et al. revealed a founder missense mutation in RNF213 was tightly associated with MMD onset in Japanese family (7). Since then, several countries particularly in Asia, have reported same results (17). However, as racial differences, MMD incidence are high in Asians, especially in Japanese population, and etiology is still unclear.

The polymorphism of RNF213 was recognized as a susceptible factor to MMD and has been widely studied. Several studies supported that RNF213 p.R4810K variant is common in early-onset ischemic stroke with anterior circulation stenosis (17,18). However, RNF213 p.R4810K variant is not the only susceptibility variant for MMD. To date, at least 24 genetic changes in the RNF213 gene have been found to be associated with MMD (9). In our study, we had observed five SNPS in RNF213 including rs35692831, rs9916351, rs9913636, rs8074015, and rs112735431, all of which were related to MMD morbidity. Our results show that rs9916351 and rs8074015 polymorphisms were closely related to the development of MMD both under dominant and recessive model. To the best of our knowledge, this is the first study to report that rs9913636 in RNF213 is also a susceptibility locus of MMD; nonetheless, further verification of this result in a large case-control study is warranted.

Our results of rs9916351 and rs112735431were in accordance with Duan et al. in a GWAS and Huang et al. in a case control study in Chinese population (13,17). As surgical revascularization is the main treatment regimen for MMD to prevent complications, the relationship between polymorphism and long-term clinical outcome is elusive. Ge et al. reported that the p.R4810Kvariant may not be associated with long-term clinical outcomes in Chinese patients with MMD (19).

Although the polymorphism of RNF213 has been widely detected in patients with MMD, the biochemical function and pathological role of RNF213 have not been completely clarified. RNF213 gene encodes a protein with 5256 amino acid residues that is involved in cellular processes, DNA repair, and signal transduction pathways (20,21). As a RING finger protein with E3 ubiquitin ligase activity and energy-dependent unfoldase activity, RNF213 protein can ubiquitinate specific target proteins and mediate their degradation by proteasomes (22). Single-nucleotide polymorphism of RNF213 may result in disruption of ATP hydrolysis cyclicity, inhibition of angiogenesis, and reduction of antiangiogenic activity of interferon beta-1. The consequences include endothelial cell dysfunction, smooth muscle cell dysfunction, and abnormal hemostasis, all of which could aggravate the proliferation of smooth muscle cells (SMCs) and result in vascular stenosis (9). Liu et al. showed that RNF213 p.R4810K knockout zebrafish presented abnormal sprouting vessels in the head region (23). In addition, Kobayashi et al. revealed that mutation may be correlated with angiogenic capacities and caused people more susceptible to insults of cerebral hypoxia (8). In our study, we had found another two loci polymorphisms (rs9916351and rs8074015) were also significantly corelated with the morbidity of MMD. Thus, in future, more studies focused on the mechanism of these two polymorphisms with the disease are needed.

Although our results are potentially useful to identify MMD patients among the Chinese population, these are preliminary observations and additional studies are deemed imperative. Our study has a few limitations. First, the mechanism of MMD is very complex, and we only observed five SNPs; hence, these SNPS may not completely explain the pathogenesis of this disease. Second, the small sample size of MMD cases may introduce bias. Third, only 16 hemorrhage patients were included in our study, making it difficult to verify the role of polymorphism in hemorrhagic MMD.

In summary, our results reveal the association of RNF213 rs9916351, rs9913636, rs8074015, and rs112735431 polymorphism with MMD in Chinese population. However, these data need to be validated in a larger cohort of patients. Furthermore, functional studies are necessary to investigate whether and how these polymorphisms influence the key pathways involved in the pathogenesis of MMD.

The authors appreciate all the participants and their relatives in the study and the members of the survey teams.

Reporting Checklist: The authors have completed the STREGA reporting checklist. Available at http://dx.doi.org/10.21037/atm-20-1040

Conflicts of Interest: All authors have completed the ICMJE uniform disclosure form (available at http://dx.doi.org/10.21037/atm-20-1040). The authors have no conflicts of interest to declare.

Ethical Statement: The authors are accountable for all aspects of the work in ensuring that questions related to the accuracy or integrity of any part of the work are appropriately investigated and resolved. The study was conducted in accordance with the Declaration of Helsinki (as revised in 2013). Written informed consents were obtained from all participants in the study, and the study was approved by the Ethics Committee of Beijing Tiantan Hospital.