Methylation of the MAOA promoter is associated with schizophrenia

Schizophrenia is a chronic and severe mental illness with many clinical manifestations, negatively affecting thought, perception, emotion, and behavior (1,2). Schizophrenia shows much heterogeneity in the type, symptoms, and course of the disease. Although lifetime morbidity is as low as 1%, it can still lead to serious and negative consequences, including disability (3). Patients with schizophrenia are more violent compared to mentally healthy people or those with other mental disorders (4). Additionally, the quality of life for patients with schizophrenia is degraded while simultaneously imposing a heavy burden on families and society (5). Therefore, there is an urgent need to understand better the mechanisms underlying the pathophysiology of schizophrenia.

The development of molecular biological techniques has aided the discovery of polymorphic sites associated with schizophrenia. Monoamine oxidase A (MAOA) plays a crucial role in the metabolism of biogenic monoamines, including serotonin, dopamine, and epinephrine (6). MAOA and neurotransmitter abnormalities are closely related to the development of schizophrenia (7,8). The gene encoding MAOA is located on the X chromosome with a variable nucleotide repeat (VNTR), located 1.2-kb (Xp11.4–p11.3) upstream of the MAOA coding sequence and consists of a 30-bp repeat sequence (9). Carrying 2 or 3 VNTRs is defined as having low MAOA activity, while greater than 3 is referred to as high MAOA activity (7). Some studies have revealed that individuals with low MAOA activity alleles have a higher risk of schizophrenia (10,11). However, another study showed that schizophrenia in women is associated with high MAOA activity (12). Therefore, the inconsistency of these results suggested the involvement of alternative molecular mechanisms that could influence gene expression and lead to the development of schizophrenia.

Epigenetic modifications, including methylation, are essential gene molecular regulatory mechanisms to allow genes to cope with environmental changes. DNA’s methylation refers to the selective addition of a methyl group to the CpG nucleotide of methyltransferase-catalyzed DNA to form 5-methylcytosine (13). Studies have shown that DNA methylation can regulate gene expression in mental disorders by altering chromatin structure, DNA conformation, DNA stability, and DNA-protein interactions (14,15). DNA’s methylation variation is an essential contributor to individual phenotypic, differences, and abnormalities in methylation that are closely related to schizophrenia, violent aggression, and other complex diseases. A DNA methylation analysis of 485,764 CpG sites across the genome revealed 234 sites displayed significantly different methylation in schizophrenia patients (16). This study supported the idea that DNA methylation could regulate the pathophysiological processes involved in schizophrenia. However, the relationship between DNA methylation of MAOA and the onset of schizophrenia has not been reported before.

The study was conducted in accordance with the Declaration of Helsinki (as revised in 2013). The study was approved by the Ethics Committee of Kunming Medical University (No: KY2019.57).

We investigated methylation of the MAOA gene promoter in a total of 151 individuals with schizophrenia (104 males and 47 females) in the Yunnan Psychiatric Hospital, Yunnan, China. Criteria for admission of schizophrenia: (I) in line with DSM-V diagnostic criteria; (II) diagnosis was made by at least two psychiatrists independently; (III) Yunnan Han nationality, age 18–60. Exclusion criteria: (I) combined with brain organic diseases, brain trauma or serious physical diseases; (II) combined with nervous system diseases and other mental disorders; (III) pregnant or lactating women; (IV) other drug abuse history within 6 months. Accordingly, 247 unrelated subjects (204 males and 43 females) were also recruited as control subjects. Criteria for admission of control group: (I) the individuals whose gender, nationality and age match the above case group; (II) no genetic history; no history of major physical diseases. The control group also met the above exclusion criteria. Written informed consent was obtained from the patients themselves or their family members and guardians before enrollment.

Agarose gel electrophoresis detected genomic DNA. The electrophoresis bands were visible, with no clear degradation and no RNA contamination. Genomic DNA quality was quantified using a Nanodrop 2000 (NanoDrop Technologies, USA). Samples with concentrations greater than or equal to 20 ng/µL or a total of 1 µg with an OD260/OD280 DA ≥1.8 were used (this amount can be used in 10 PCR panels).

Design of primers and optimization of single-locus PCR conditions

Primers were designed and provided by Genesky Company (Shanghai, China). The human genome treated with bisulfite was selected and amplified as primer-template to obtain a clear single band for later experiments.

The optimization of multiple PCR primers

Treatment of DNA with bisulfite

The samples were processed by EZ DNA Methylation-God Kit (ZYMO company, USA), to convert cytosine C without methylation of genomic DNA into uracil U (Bisulfite Conversion Efficiency is shown in Figure S1).

Specific tag sequences were added to the samples

Specific tag sequences compatible with the Illumina platform (Illumina, USA) were introduced to the end of the library by PCR amplification using primers with Index sequences. The PCR procedure with 11 cycles was used to reduce the nonspecific amplification as much as possible.

The final methyl target sequencing library was obtained by mixing Index PCR products of all samples. The fragment length of the library was verified by an Agilent 2100 Bioanalyzer (Agilent Technologies, USA) (see Figure S2). 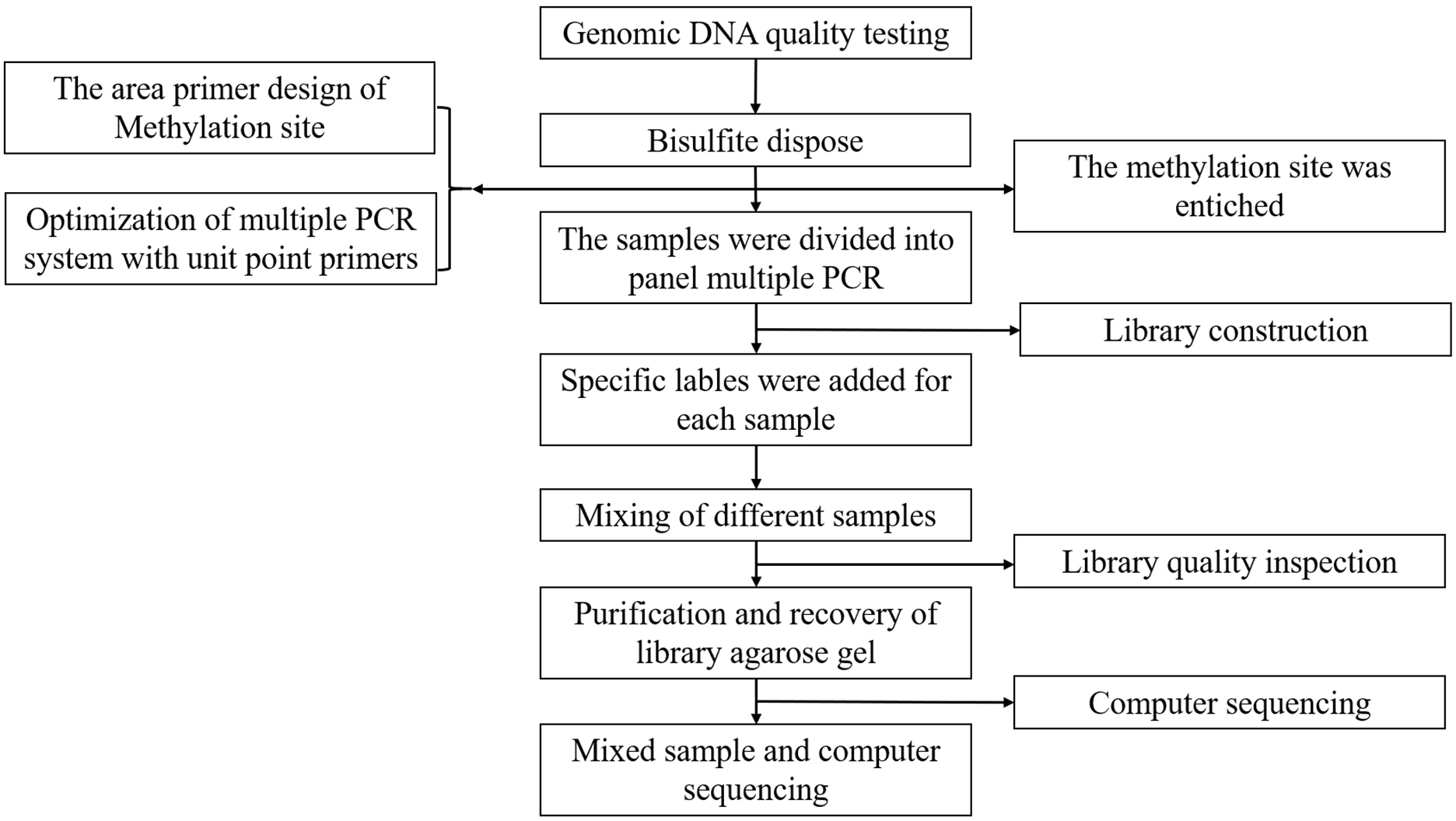 By using methylation sequencing of target regions (Table 1), we investigated the total DNA methylation profile of MAOA in 151 patients with schizophrenia and 247 controls (Table S1). Principal component analysis (PCA; Figure 1) and hierarchical clustering (Figure 2) were employed to visualize the DNA methylation profile of MAOA in all samples. Neither PCA nor hierarchical clustering analysis could separate the schizophrenia patients and the control subjects as expected when investigating all MAOA methylation sites.

Figure 1 PCA analysis of all samples based on the methylation level of CpG locus in the amplicons in BF and DF (A) and in BM and DM (B). The sample groups were distinguished according to the color of PCA; The X and Y axes indicate the index that the best reflects the real species composition of samples, respectively.

Table 4 Differentially methylated segments between the female schizophrenia group and the control group, others were the same with Table 3
Full table

In recent years, the relationship between DNA methylation and schizophrenia has been extensively explored (17-19). Schizophrenia is a complicated disease, which might be influenced by epigenetic modifications, including methylation, and is vulnerable to environmental factors (20). This present study reveals that methylation of the MAOA gene promoter at the MAOA-2 and MAOA-3 methylation sites is linked to susceptibility to schizophrenia in both males and females.

DNA’s methylation of MAOA contributes to mental disorders, including schizophrenia, through the regulation of serotonin. In a pharmacokinetic study investigating 61 female patients with major depression, decreased methylation at two individual CpG sites in the MAOA promoter region was linked to a slower response to treatment with serotonin reuptake inhibitors over 6 weeks (24). Abnormalities in DNA methylation at the MAOA promoter may be associated with schizophrenia in males (25). Males with antisocial personality disorder (ASPD) showed hypermethylation in the MAOA promoter compared to healthy men. These findings were associated with whole-blood serotonin levels and reduced transcriptional activity in vitro (26). A prospective examination of associations between epigenome-wide methylation patterns in cord blood at birth and propensity to develop conduct disorders between the ages of 4–13 years identified a subthreshold association for increased methylation in the vicinity of the MAOA gene (27).

In the process of sample collection, the number of female patients is significantly less than that of male patients, so that the number of female samples in this study is insufficient. This phenomenon has also attracted our attention, but the real reason for this phenomenon cannot be reasonably explained. We are considering whether the difference in the prevalence of schizophrenia between male and female patients is worthy of further study. Due to the limited number of female clinical samples used in the experiment, the general applicability of the results of this study is limited to a certain extent, so it is necessary to expand the sample size in future research.

We thank the National Natural Science Foundation of China and each author.

Funding: The present study was supported by the National Natural Science Foundation of China (grant No. 31100906).

Conflicts of Interest: All authors have completed the ICMJE uniform disclosure form (available at http://dx.doi.org/10.21037/atm-20-4481). The authors have no conflicts of interest to declare.

Ethical Statement: The authors are accountable for all aspects of the work in ensuring that questions related to the accuracy or integrity of any part of the work are appropriately investigated and resolved. The study was conducted in accordance with the Declaration of Helsinki (as revised in 2013). The study was approved by the Ethics Committee of Kunming Medical University (No: KY2019.57). Written informed consent was obtained from all subjects in our study.