Recent studies have revealed interleukin-10 (IL-10) to be an anti-inflammatory factor that contributes prominently to the stability maintenance of coronary atherosclerotic plaque, tissue repair, etc., and also plays a protective role in the occurrence and development of coronary heart disease (7-9). Most inflammatory cells (including macrophages) can synthesize and secrete IL-10 (9). Nevertheless, it is currently unclear whether IL-10 expression is internally correlated with macrophage activation and cardiomyocyte apoptosis in coronary heart disease (including acute MI).

We present the following article in accordance with the ARRIVE reporting checklist (available at http://dx.doi.org/10.21037/atm-20-3349).

The mice were anesthetized by intraperitoneal injection of 1% pentobarbital sodium, followed by tracheal intubation, and thus a ventilator was connected. A 2 cm incision was made at the left sternal margin to expose the heart between the third and fourth rib. The anterior descending branch of the left coronary artery was ligated to prepare the MI model while the sham group underwent the same surgical procedure except with the exclusion of coronary artery ligation. When the color of left ventricular changed from red to white, we could judge that the animal model is successful. A total of 4 mice died (2 mice due to pneumothorax and 2 mice due to hemorrhage in the thoracic cavity) during the animal experiment, and 4 mice respectively died at 3, 11, 24, 70 hours (due to hemothorax) after the operation. The survival rate of mice models was 81%.

The heart tissues of the mice were fixed with 4% paraformaldehyde for 24 h. The tissues were then soaked and embedded in paraffin after gradient dehydration using ethanol and de-ethanolization using xylene. The paraffin tissues were cut into 4 µm slices. Pathological changes were observed by routine hematoxylin and eosin (HE) staining, and collagen deposition was observed by Masson staining. Distributions of IL-10 and arginase in myocardial tissues were observed by immunohistochemical staining. Cell apoptosis was observed under a fluorescence microscope after terminal deoxynucleotidyl transferase dUTP nick end labeling (TUNEL) staining (Millipore, USA).

The expression of IL-10 in venous blood of mice was detected by enzyme-linked immunosorbent assay (ELISA) kit. Serum samples were allowed to clot 2 hours at 4 °C before centrifugation at 3,000 ×g, 4 °C for 15 min. The supernatant was harvested immediately and stored at −80 °C for later analysis. Then, the IL-10 (E-10155); (Andy Gene Biotechnology Co., Ltd., 301 University Village Drive.Richardson. TX75081. USA) concentration in the serum were detected with the ELISA kits according to the manufacturer’s instructions. Peptide concentration was expressed in pg/mL.

A total of 50 mg of myocardial tissues were weighed, and 1 mL of RIPA lysate containing protease inhibitor was added. After that, centrifugation was performed to extract the supernatant protein. The protein standard curve was plotted by Bradford method. The required 15 µg of protein that needed to be tested was loaded, and analysis of electrophoresis and electrolytic membrane was done then performed. Primary antibodies (IL-10, tubulin, MCP-1, arginase, iNOS, Bcl-2 and Bax; dilution performed at 1:1,000) and secondary antibodies (HRP-labeled goat anti-rabbit or goat anti-mouse IgG; dilution performed at 1:5,000) were added. Color development was conducted by electrochemiluminescence (ECL) reagent. The bands were analyzed using Image J image processing software. The ratio of optical density of the target protein to the optical density of internal (tubulin) protein was used as the relative expression of the protein.

SPSS 20.0 software was used for statistical analysis. Normality was tested for quantitative data, and the data that met normal distribution were represented by mean ± standard deviation. The mean values of multiple groups were compared using one-way analysis of variance (ANOVA), while pair-wise comparison was performed using the least significance difference (LSD) test. A P value <0.05 was considered to be statistically significant.

Pathomorphological changes in mice with MI 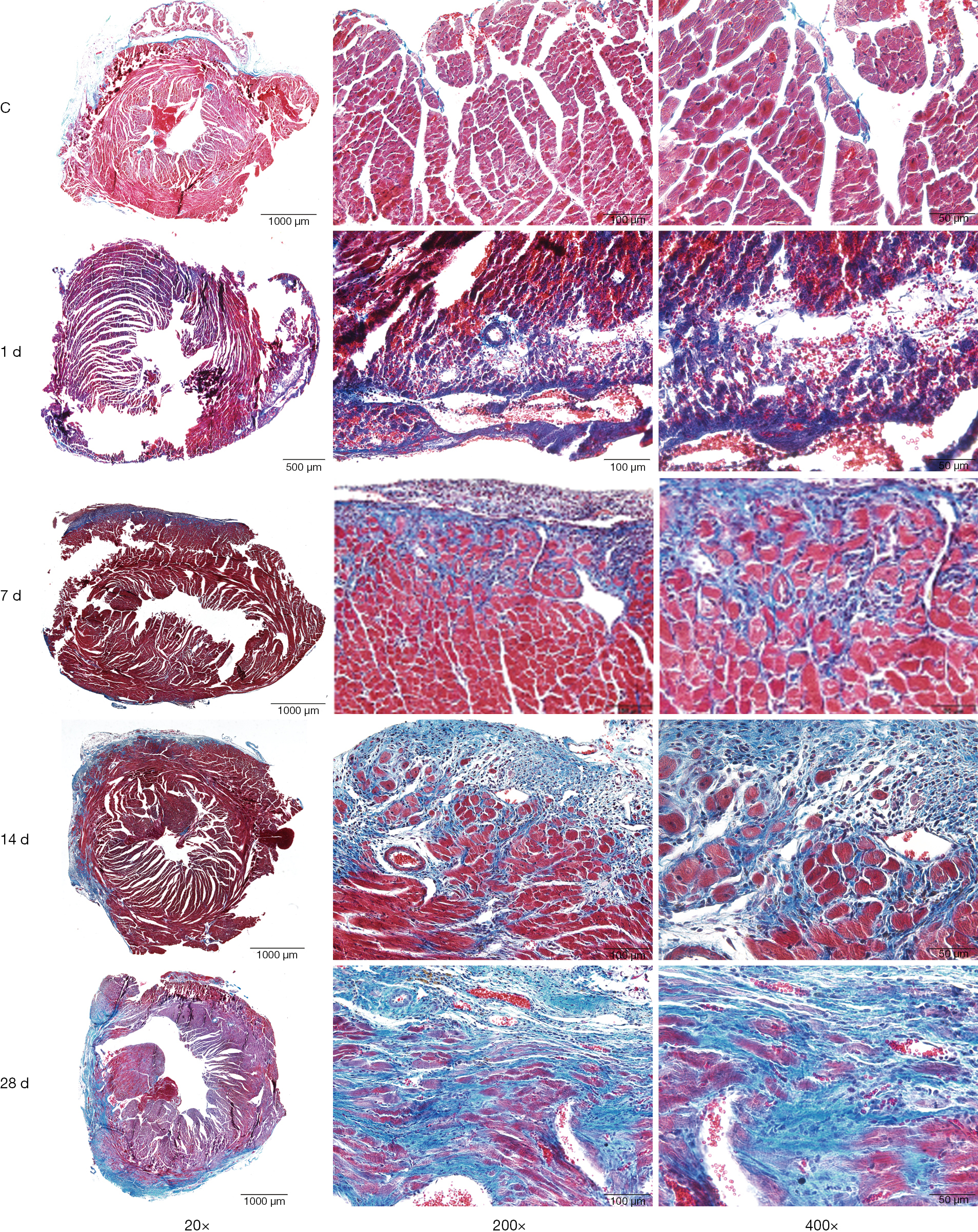 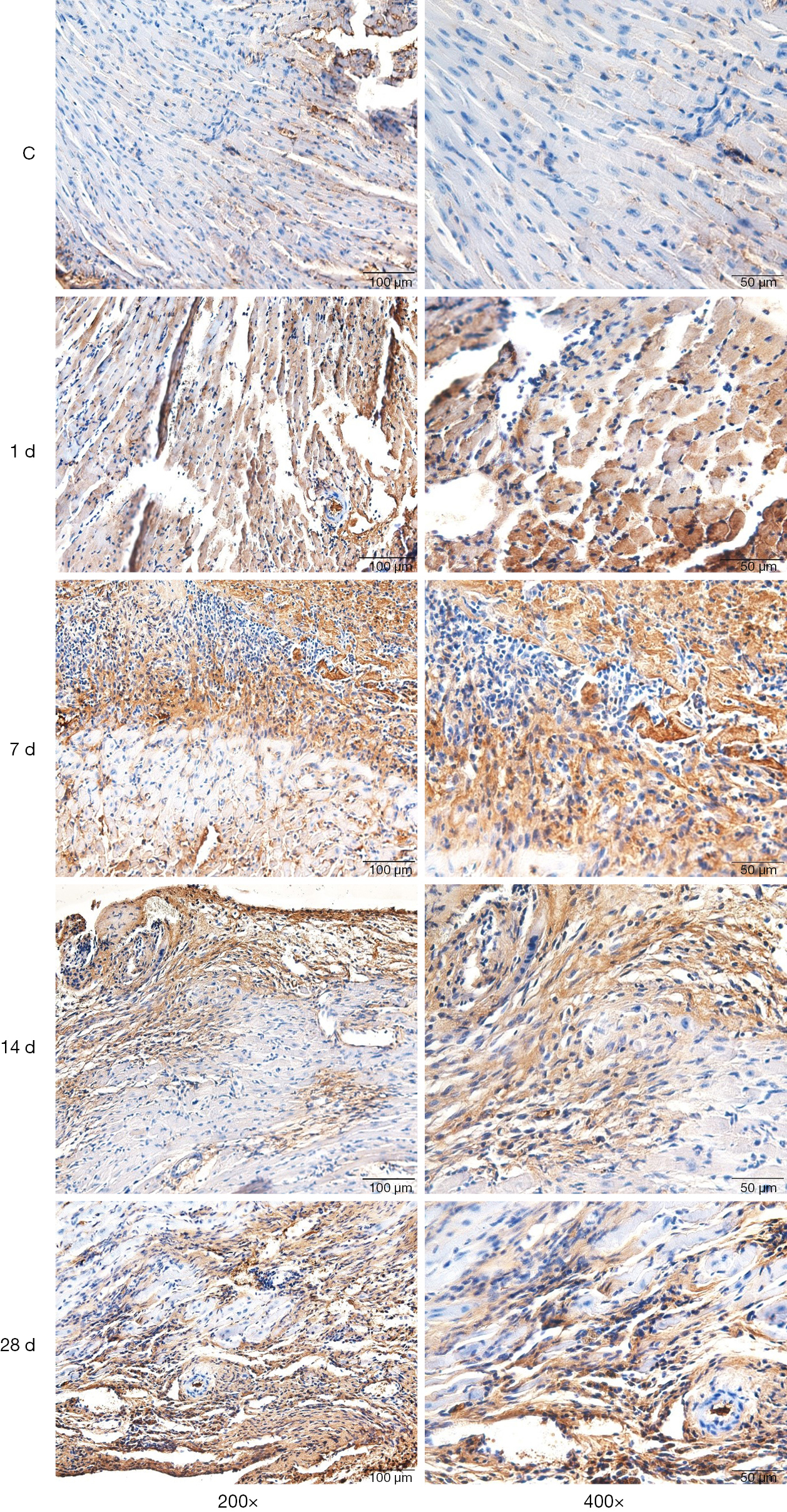 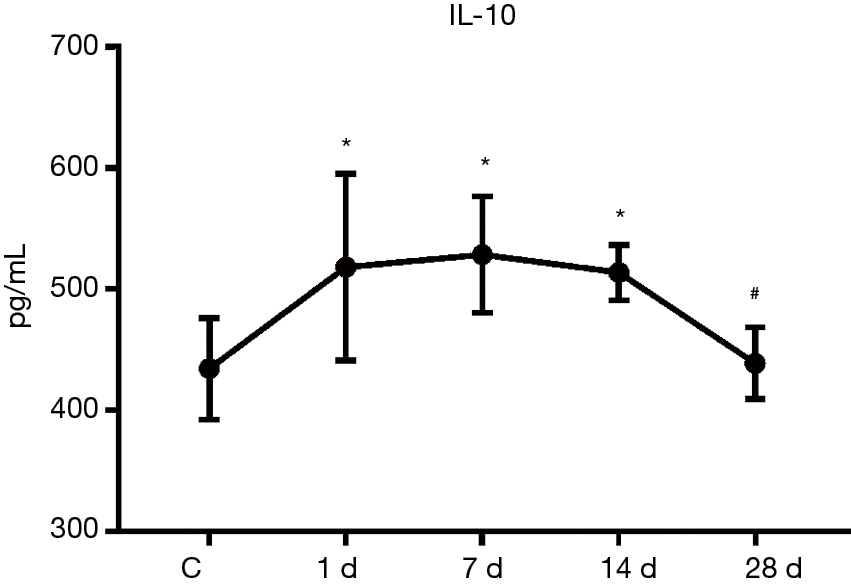 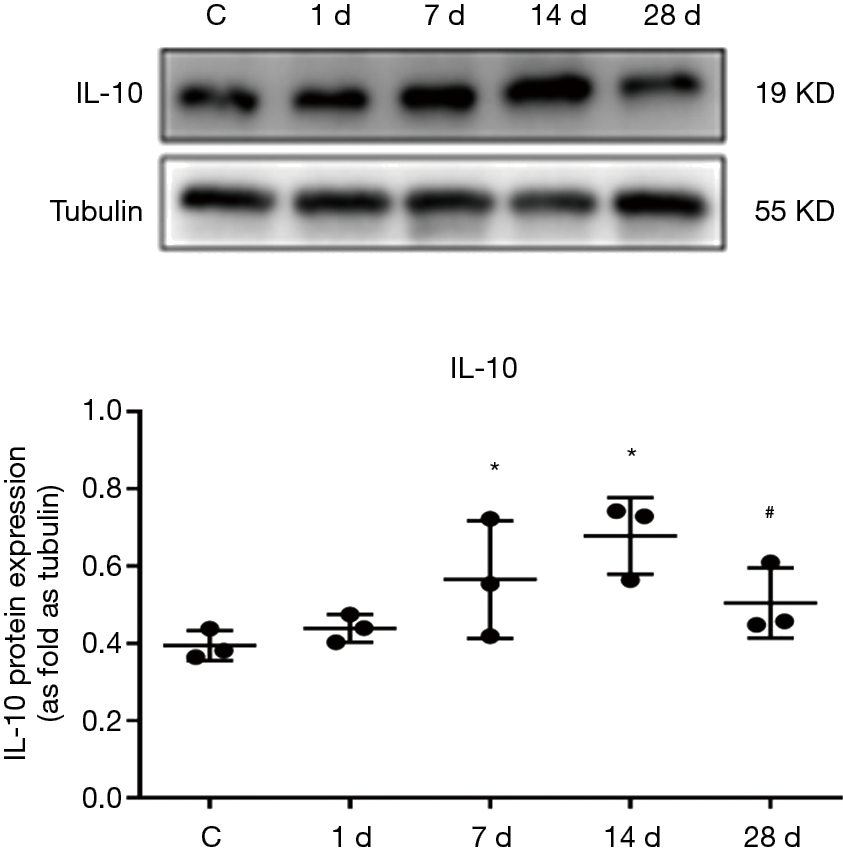 Correlation analysis of serum IL-10 and IL-10 expression in myocardial tissues showed that r was 0.543 and P was 0.005, demonstrating that the 2 were positively correlated.

Moreover, IL-10 mRNA expressions were detected via real time polymerase chain reaction (PCR) in mice with MI. The results of real time PCR revealed that the expression of IL-10 mRNA in myocardial tissues was increased to a certain degree when compared to the control group on day 1 of MI, and was significantly increased on day 7 of MI, Moreover, IL-10 expression peaked on day 14 of MI, However, on day 28 of MI, the expression of IL-10 protein was decreased significantly when compared to that on day 14, (P<0.05, Figure 5).The trend of IL-10 mRNA expressions were the same as the protein of the IL-10. 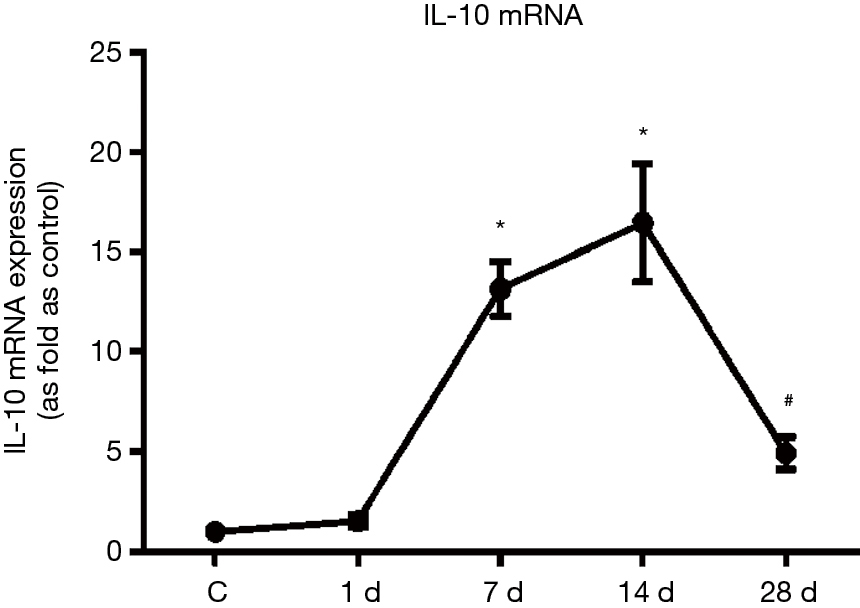 Changes in the expressions of MCP-1, iNOS, and arginase in mice with MI

Cardiomyocyte apoptosis of mice with MI 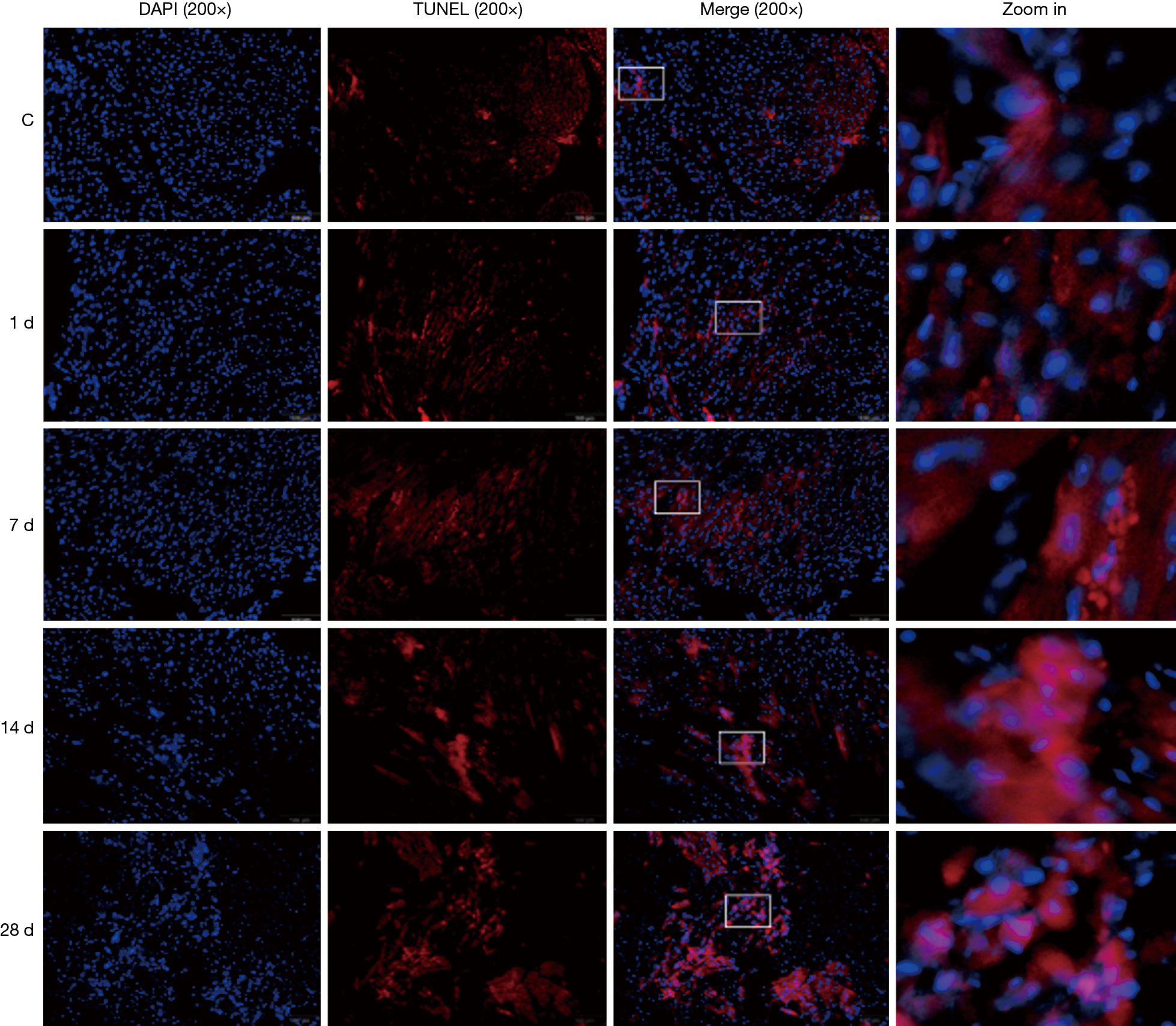 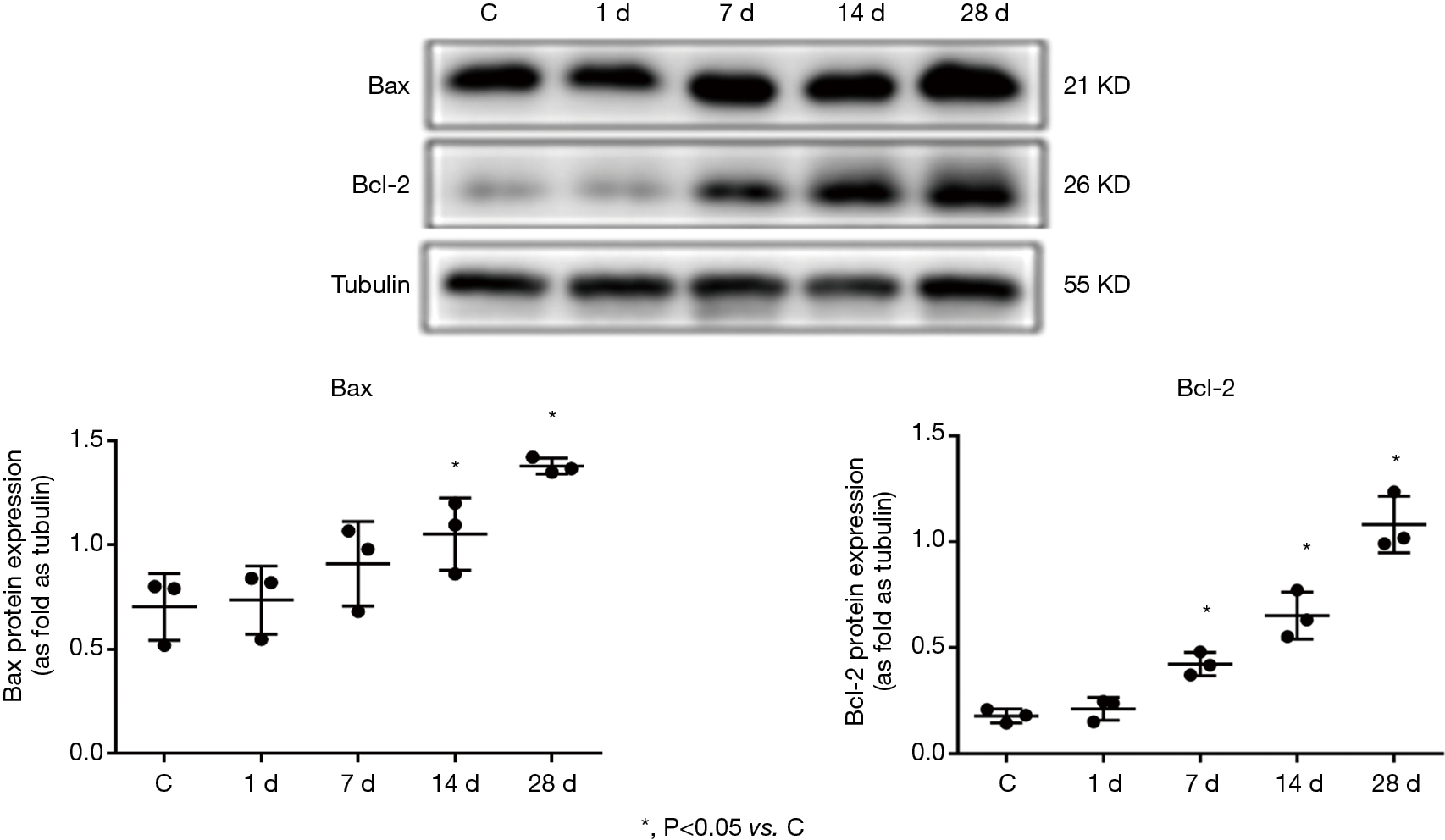 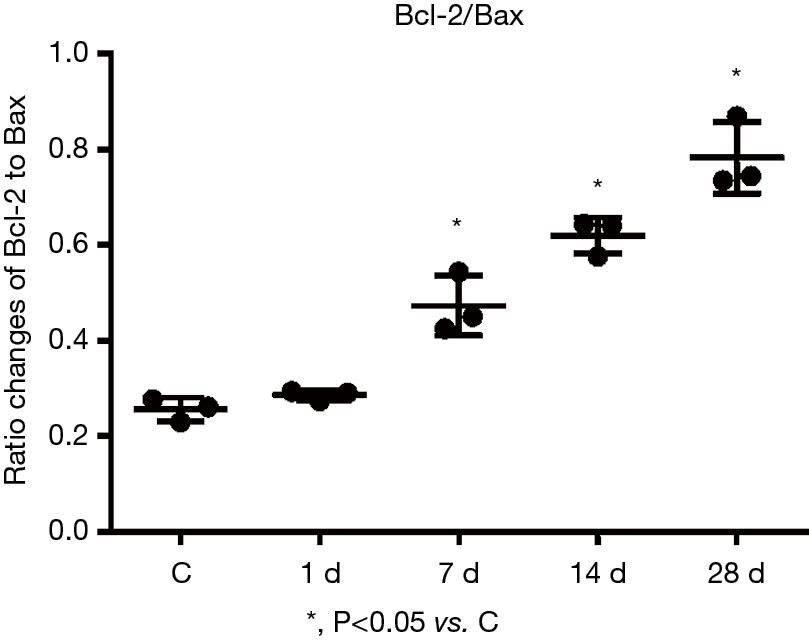 The inflammatory responses after MI act as an important pathological process in MI. A large number of inflammatory factors with different functions are significantly involved in the inflammatory responses (2,10). IL-10 is an important anti-inflammatory factor, and plays a strong anti-inflammatory role. Studies have demonstrated that IL-10 is closely related to the occurrence and prognosis of cardiovascular diseases, and has an important regulatory effect on the remodeling of tissue functions and structures after ischemic injury (8,9,11). Recently, it has been reported that the target cells in which IL-10 plays anti-inflammatory effects are mainly macrophages. Mononuclear macrophages secrete IL-10 after activation by various endogenous and exogenous mediators, causing IL-10 genetic transcription via lipopolysaccharide activation pathway and protein kinase A-dependent activation pathway, among others (12,13). Additionally, mononuclear macrophages also secrete IL-10 during the process of clearing apoptotic cells, and this process depends on the activation of p38 mitogen-activated protein kinase (MAPK) (14). It has been reported that the expression of IL-10 is increased during ischemia, and acts as a protective response to ischemia (15,16). Some researchers have found that serum Il-10 is significantly increased on the day of acute MI. Moreover, IL-10 remains at a higher level on day 1 after percutaneous coronary intervention (PCI) therapy, but it decreases to some extent on day 7 after therapy, suggesting that IL-10 is associated with the time and severity of myocardial ischemia to some extent (17). Our study results showed that serum IL-10 expression was increased significantly on day 1 of MI in mice, and remained at a higher level on days 7 and 14 of MI, but was decreased after that, continuing to decline to a level comparable to that of the control group on day 28. There was a small number of cells with positive IL-10 expression in the infarcted areas on day 1 of MI. Moreover, the majority of the cells with positive IL-10 expression were visible on days 7 and 14 of MI, while the cells with positive IL-10 expression were decreased on day 28. However, the expression of myocardial IL-10 protein was significantly elevated on day 7 of MI, and peaked on day 14, while it decreased significantly on day 28. Correlation analysis showed that the expression of serum IL-10 was positively correlated with the expression of IL-10 protein in myocardial tissues. These results suggested an increasing trend initially and then a decrease in IL-10 expression (regardless of in serum or myocardial tissues) with the prolonged time of infarction in the mice models with MI. On day 1, MI was considered as the initial stage of acute inflammation, thus a greater necrosis of cardiomyocytes, accompanied by exudation and infiltrates of inflammatory cells, was observed. However, day 7 of MI was the critical stage of acute inflammation, in which a large amount of exudation and infiltrates of inflammatory cells, accompanied by the release of a large number of proinflammatory factors were observed. In response to these, the body releases anti-inflammatory factors (such as IL-10) to maintain a balance in the biological functions (11,18). Therefore, at around days 1 and 7 of MI, IL-10 was highly expressed in serum and/or myocardial tissues, and this continued until week 2. After that, tissue injury entered the repair stage, with inflammation also degrading gradually, and there was more extracellular matrix (including collagen) to replace the infarcted myocardial tissues gradually (3,19). At that time, synthesis and secretion of IL-10 gradually decreased, suggesting that the dynamic changes of IL-10 in serum and myocardial tissues during the process of MI were closely associated with the occurrence and development of inflammation, as well as the outcomes of MI. These might be caused by the defense and anti-inflammatory effects of the body to inflammatory responses during MI.

Cardiomyocyte apoptosis also occurs with the degeneration and necrosis of cells during the process of MI. Bax and Bcl-2 are important cell apoptosis-related genes and cell apoptosis regulatory proteins. Bax plays a positive regulatory effect during cell apoptosis, promoting the occurrence of cell apoptosis. Bcl-2 plays a negative regulatory role, blocking the apoptotic pathway and inhibiting the occurrence of apoptosis (5,21). However, the ratio of Bcl-2/Bax is closely related to cell apoptosis and survival (6,22). In this study, the results showed that the number of apoptotic cells in myocardial tissues was increased gradually with prolonged time of infarction, and the expression of Bax protein was also increased gradually, indicating that cardiomyoctyte apoptosis was gradually aggravated with prolonged time of infarction. With prolonged time of infarction, the expression of Bcl-2 protein was elevated gradually, and the ratio of Bcl-2/Bax was gradually increased in particular. Correlation analysis showed that the expression of IL-10 protein in myocardial tissues was positively correlated in a significant way with the expressions of Bax and Bcl-2 proteins, especially the ratio of Bcl-2/Bax proteins. These dynamic changes suggest that IL-10 expression can affect the occurrence of cardiomyocyte apoptosis during the emergence and development of MI. Due to the gradual increase in the ratio of Bcl-2 to Bax, the effects of IL-10 might regulate cardiomyocyte apoptosis by controlling the balance between the anti-apoptotic gene (Bcl-2) and the apoptotic gene (Bax), thereby affecting remodeling of functions and structures of myocardial tissues.

In addition, further correlation analysis showed a positive correlation between IL-10 and arginase in myocardial tissues, and between the expressions of Bcl-2 and Bax proteins. This suggests that IL-10, arginase. and apoptosis-regulatory proteins show close associations and play an important role in the remodeling of tissue structures and damage repair processes after MI.

The authors would like to thank the collaborators at the School of Public Health, North China University of Science and Technology. A special thanks goes to Miss Sun Ying, head of the laboratory of Yang fang and his team who conducts IL-10 analyses.

Reporting Checklist: The authors have completed the ARRIVE reporting checklist. Available at http://dx.doi.org/10.21037/apm-20-3349

Conflicts of Interest: All authors have completed the ICMJE uniform disclosure form (available at http://dx.doi.org/10.21037/atm-20-3349). The authors have no conflicts of interest to declare.

Ethical Statement: The authors are accountable for all aspects of the work in ensuring that questions related to the accuracy or integrity of any part of the work are appropriately investigated and resolved. The study was approved by North China University of Science and Technology (2019052).