Prostate cancer (PC) is the second most commonly diagnosed malignancy (excluding non-melanoma skin cancer) and the fifth leading cause of cancer death in men worldwide (1,2).

Radiotherapy (RT) is a non-surgical treatment modality which focusses megavoltage photon beams on the prostate gland with the aim of good local-regional control and prolonged disease-free survival (DFS) for PC patients (4). Normal tissue damage with RT leads to an increased cytokine production within the irradiated field, which then enters circulation (5). Cytokines are water soluble, low molecular weight proteins that transport signals between cells (6). Many previous studies reported that levels of inflammatory cytokines were increased during or after RT completion (7-10). Many pro-inflammatory cytokines can disturb microenvironment in radiated cell, thereby affecting PC progression, RT efficacy and toxicities (11).

RT is often administered in combination with androgen deprivation therapy (ADT). The use of ADT in combination with RT has become a popular treatment modality for localised high-risk PC (12-14). An understanding of the relationship between testosterone levels and inflammatory cytokine levels has been growing in recent times. Few clinical studies have evaluated the correlation between male hypogonadism and serum levels of pro- and/or anti-inflammatory cytokines (15,16). The immunological consequences of RT alone or in combination with ADT are not well explained in scientific literature. Therefore, there is clearly a need for more investigation into this area.

During this prospective study, we have measured plasma cytokine levels in PC patients treated with neoadjuvant ADT and definitive RT at various time points before and after treatment. The aim of this study is to assess the influence of ADT and RT on the expression of various circulatory cytokines in patient’s plasma.

Eighteen patients were recruited who had agreed to undergo curative external beam RT (EBRT) +/− ADT for intermediate to high-risk PC using the D’Amico classification (3). All patients were diagnosed between 2nd July 2015 and 21st April 2016 at Royal Darwin Hospital (RDH). Eligible patients were ≥18 years old, had histologically confirmed prostate adenocarcinoma, and had an ECOG (Eastern Cooperative Oncology Group) performance status of 0 to 1 and no history of prior surgery to the prostate. Exclusion criteria include prior prostate EBRT or brachytherapy, metastatic disease at presentation, prior history of malignancy (excluding non-melanoma skin cancer), and serious medical or psychiatric illness precluding safe administration of ADT or RT. Using the D’Amico classification, selected patients were classified into the following three groups: low risk, ≤ cT2a, PSA <10 ng/mL and GS ≤6; intermediate-risk, cT2b, PSA 10–20 ng/mL, GS =7; and high risk, ≥ cT2c, PSA >20 ng/mL, GS ≥9–10 (3).

This clinical study has been approved by the Human Research and Ethics Committee (HREC: 2015-2385) of the Northern Territory (NT) and the Department of Health and Menzies School of Health Research. The research team collected previous prostate tissue biopsies, blood samples at different time points during treatment. Medical and pathology records from RDH and Alan Walker Cancer Care Centre (AWCCC) were interrogated during this study.

All patients had fiducial markers inserted prior to RT and had daily cone beam imaging during treatment. Treatment planning was based on computed tomography (CT) performed with empty rectum, comfortably filled bladder, with patients in the prone position. Clinical target volume (CTV) included the prostate gland or the prostate gland plus seminal vesicles. A 1cm margin was added around the CTV to define the planning target volume (PTV), expect the boundary between the anterior rectal wall and the prostate, where a 0.7 cm margin was used.

Blood was drawn from patients before ADT, immediately preceding the initiation of RT, at the end of RT and 3 months from the completion of RT. At each sampling, 5–10 mL of peripheral blood was drawn into blindly coded 5–7 mL vacutainer tubes containing powdered lithium heparin (14 Units/mL blood). Blood samples were immediately placed on ice for transport to the laboratory, aliquoted into conical 15 mL tubes and centrifuged (3,000 × g × 20 min) to separate out the plasma. The platelet-free plasma layer was separated from the blood, transferred into coded cryotubes and frozen at –80 °C until they were analysed. The analysis was carried out under blind conditions and in accordance with the guidelines established by the Charles Darwin University committee for handling biohazardous material. 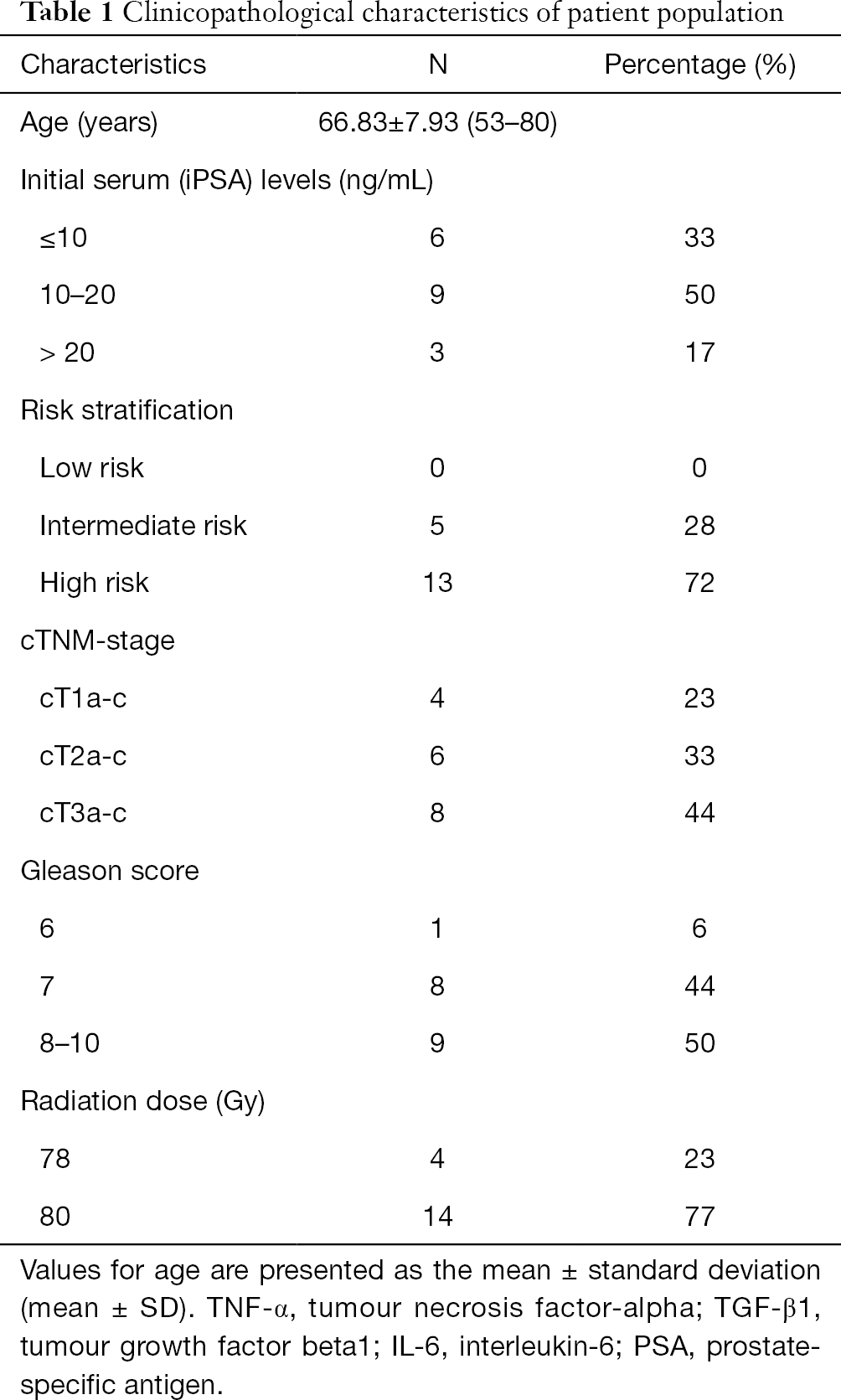 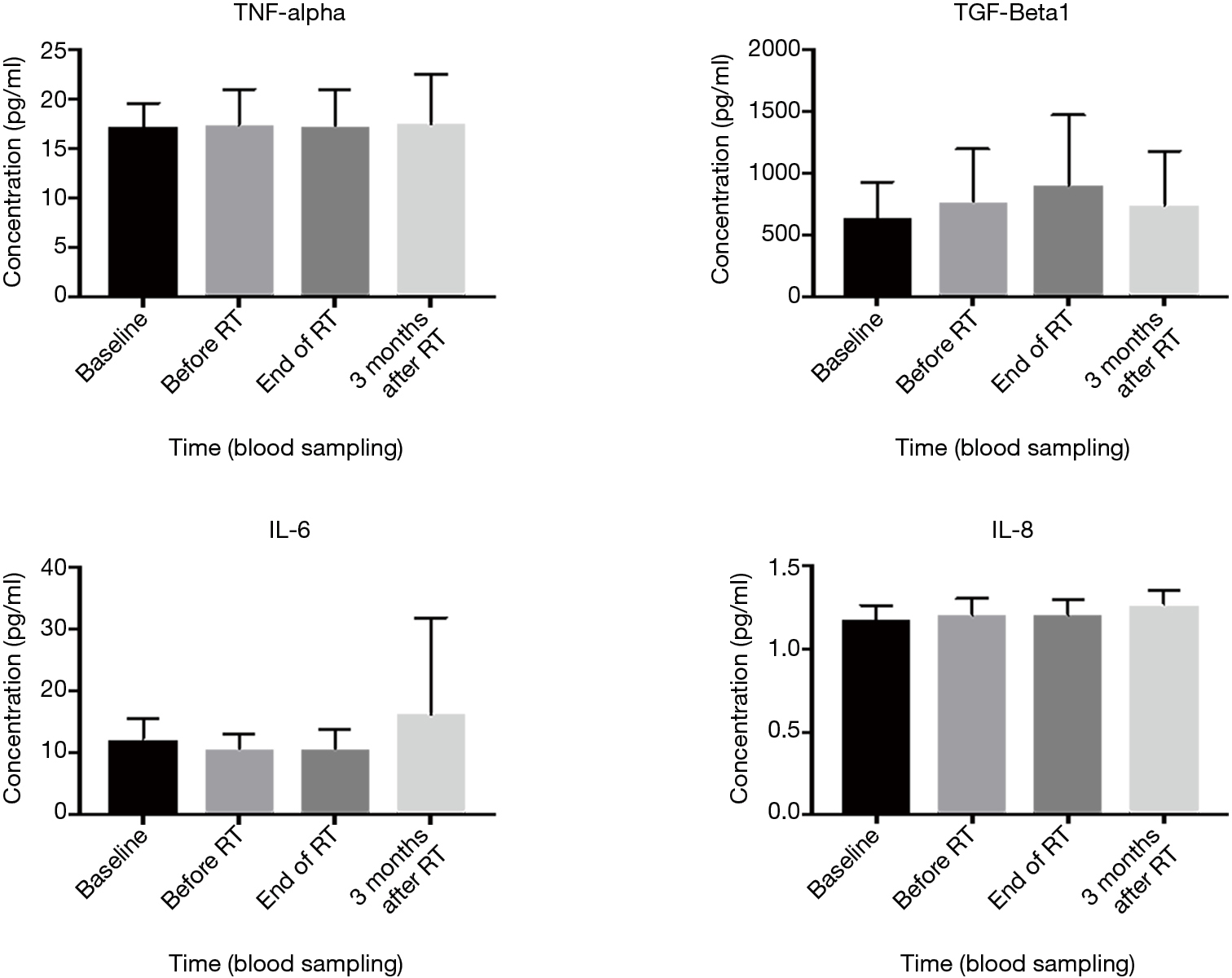 PC cells are androgen-dependent and ADT is a form of systemic therapy since ADT induces programmed cell death in normal, hyperplastic, pre-neoplastic, and malignant prostatic epithelial cells (23,24). Recently, there has been increasing scientific inquiry into the association between testosterone levels and inflammatory cytokines. Some previous studies have identified an association between male hypogonadism and serum levels of pro- and/or anti-inflammatory cytokines (15,16,25). Tanji et al. reported that six months of ADT significantly decreased serum fibroblast growth factor-2 (FGF-2) and vascular endothelial growth factor (VEGF) levels in serum of PC patients (15). Both FGF-2 and VEGF contribute to tumour angiogenesis in PC (26). Thus, ADT may control the concentrations of such cytokines, which suppress angiogenesis and may result in antitumor effects (27). Moreover, decreased levels of inflammatory cytokines such as IL-1, IL-6, IL-8, TNF-α, and stromal cell-derived factor 1 (SDF-1) were observed in blood samples after ADT treatment (19). One more study also identified that testosterone supplementation in hypogonadal men caused decreases in inflammatory biomarkers such as TNF-α and IL-1β (25). In this prospective study, we observed that plasma levels of TGF-β1 increased and inflammatory cytokine IL-6 decreased in post-ADT blood plasma when compared with pre-ADT plasma samples. However, these changes were not statistically different. Our findings agree with previous clinical studies that inflammatory cytokines such as IL-6 decreased after administration of ADT.

Following RT, researchers believe that gene expression changes at the messenger RNA (mRNA) level leads to increased production of some cytokines (5,17). Cytokine levels may decrease or increase depending on tumour response to RT (5,17). Several previous clinical studies reported that levels of cytokines such as interleukin (IL)-1, transforming growth factor (TGF)-β, and tumour necrosis factor (TNF)-α, Interferons- (IFN)-γ, IL-6, IL-4 and chemokine (C-C motif) ligand-2 (CCL2) were increased during or after RT completion (7-10). Further clinical studies also identified that expression levels of cytokines such as TGF-β1 and TGF-β2, IFN-γ, TNF-α and IL6 were elevated during intensity-modulated RT in the blood patients with PC (8,15,18,28). Our current study showed that expression levels of IL-6, TNF-α and IL-8 remained unchanged in post-RT plasma samples, when compared with pre-RT plasma. We did notice a trend to increasing levels of TGF-β1 post-RT, but this difference was not statistically significant.

Elevated levels of the cytokines in patients with PC have been detected, suggesting that proteomic analyses of pre-treatment and post-treatment cytokine levels could be more broadly applicable for determining the response of ADT and RT. The limitations of this study included relatively small patient numbers which made interpretation of the significance of changes in cytokine levels very difficult.

In conclusion the changes in cytokines levels have been found after ADT and RT, which strengthen the finding of other clinical studies. Accept that small numbers of samples made difficult to attain significant results. Large clinical studies will be required to validate these findings and hopefully become useful biomarkers in the clinical setting to predict patient outcome and success of treatment received.

This clinical study was supported by College of Health and Human Sciences, Charles Darwin University, Australia. The authors would also like to acknowledge the Alan Walker Cancer Care Centre (AWCCC), RT technicians for their support in blood sampling and clinical data collection for this study, and the patients who gave their time so freely to participate in this study.

Conflicts of Interest: All authors have completed the ICMJE uniform disclosure form (available at http://dx.doi.org/10.21037/atm-19-1913). SSS serves as the unpaid editorial board member of Annals of Translational Medicine from Apr 2019 to Mar 2021. The other authors have no conflicts of interest to declare.

Ethical Statement: The author is accountable for all aspects of the work in ensuring that questions related to the accuracy or integrity of any part of the work are appropriately investigated and resolved. This clinical study has been approved by the Human Research and Ethics Committee (HREC: 2015-2385) of the Northern Territory (NT) and the Department of Health and Menzies School of Health Research.