The association between smoking and loneliness among Chinese university freshmen

Loneliness, a painful and distressing emotion, is very prevalent among university students, in particular freshmen. For example, in China, 64.4% of the general university students and 92.3% of the university freshmen feel moderately-to-severely lonely (1,2). There is convincing evidence that loneliness is associated with increased mortality and a wide-range of physical and mental morbidities in the general population and a variety of negative education outcomes in adolescents such as increased truancy, poor academic performance, and dropout from school (3-7). Examining correlates of loneliness in university students is necessary to improve understanding of loneliness etiology and design effective interventions to reduce its negative effects.

Smoking is multifactorial in etiology, however, its underlying psychosocial factors are generally understudied (8). The self-medication theory argues that people who suffer from mental health problems are more likely to use nicotine, alcohol, and other drugs to ameliorate their negative emotions such as loneliness and depressed mood (9). Accordingly, some studies have reported the significantly higher level of loneliness in smokers than non-smokers and the self-medication theory has been used to explain the positive loneliness-smoking association (10,11). Nevertheless, many other prior studies found no significant association between loneliness and smoking (12). Researchers, therefore, have speculated that the loneliness-smoking association might be culture- and population-specific, for example, the effect of smoking on loneliness is weak among individuals living in environments in which smoking is socially unacceptable (10,12). In Chinese culture, smoking is a commonly accepted social activity and smoking among men is generally viewed as a social etiquette, which can promote feelings of acceptance and brotherhood among peers and business associates (13). Because disconnection with others is often associated with an increased risk of loneliness (14), smokers are likely to have a lower risk of loneliness in the context of Chinese smoking culture.

In recent decades, there have been plenty of studies on loneliness in Chinese university students and various correlates of loneliness in this population were identified, including rural origin, inadequate social support, neurotic personality, problematic internet use, negative coping strategies, and single-parent family (15-17). However, few existing studies have specifically examined the smoking-loneliness relationship in Chinese university students. In the literature, studies using samples of university students in other countries presented conflicting results on the smoking-loneliness relationship: some found significant positive association while some found no association (11,18,19). Due to cultural differences across countries, it is difficult to generalize these findings to students at Chinese universities.

The transition from senior middle school to college is very challenging for most fresh students. Because of difficulties in adjusting to the new environments and forming new social relationships, and being separated from close relationships, university students are more likely to feel lonely in their first academic year. Thus, loneliness in fresh students deserves special research attention. Given the above-mentioned knowledge gap about smoking-loneliness relationship and the importance of loneliness in Chinese university students, the present study investigated loneliness and its association with smoking in freshmen of a comprehensive university in south-central China. We present the following article in accordance with the SURGE reporting checklist (available at http://dx.doi.org/10.21037/atm-20-3523).

From November to December 2019, a cross-sectional survey was conducted to examine mental health and quality of life among university students in Wuhan, China. Respondents were fresh students of the 2019/2020 academic year from a comprehensive university in this city. A two-stage cluster sampling approach was used to recruit subjects. In detail, seven schools were first randomly selected from a total of 19 schools of the university. All 1,557 freshmen of these selected schools were then invited to participate in the study. Fresh students who were of Chinese nationality and willing to participate were eligible for the survey.

Based on previous studies (15-17), we assumed that the prevalence of feeling lonely at least sometimes was 0.25, with a precision of 0.025, a response rate of 0.80 and a confidence interval of 95%. According to these parameters, the minimum sample size of university students was estimated to be 1,405 by using PASS 2008 (LLC, Kaysville, UT, USA).

The survey protocol was approved by the Ethics Committee of Wuhan Mental Health Center. Before the formal survey, all participants signed the informed consent form.

We gathered data on three forms of substance use: smoking, drinking, and illicit drug use. The questions were: “During the past 30 days, on how many days did you smoke cigarettes?”, “During the past 30 days, on how many days did you consume at least one drink containing alcohol? Common alcoholic beverages include beer, wine, hard liquor and yellow rice wine”, and “During your lifetime, have you ever used any illicit drug? Common illicit drugs include, but are not limited to, heroin, marijuana, cocaine, methamphetamine, ice, ecstasy, and MDMA”. Respondents who answered that they had smoked or consumed alcohol at least once during the past 30 days were defined as current smokers or current drinkers. Respondents who endorsed the use of an illicit drug at least once during their lifetime were categorized as lifetime illicit drug users. We used one question to assess internet use: “During the past seven days, how many hours did you spend on the internet a day?”. These questions were directly adapted from the Chinese Adolescent Health-Related/Risk Behavior Surveillance Questionnaire, which was developed by the Chinese Center for Disease Control and Prevention and has been proved to be reliable and valid (20).

The validated Chinese six-item De Jong Gierveld Loneliness Scale (DJGLS) was used to assess the overall loneliness of university students (21,22). The scale comprises six items with three being coded reversely. All items are rated on a 5-point scale: 0= never, 1= seldom, 2= sometimes, 3= often, and 4= always. Example items were: “I experience a general sense of emptiness” and “I often feel rejected”. Total DJGLS score ranges from 0 to 24, with a higher score representing a higher level of loneliness. The Cronbach’s alpha coefficient was 0.713 in our sample of fresh students, suggesting an acceptable internal consistency of the Chinese DJGLS.

DJGLS scores according to socio-demographic, substance use, and internet use characteristics were calculated and compared by using independent-samples t-test. Multivariable linear regression analysis that entered all socio-demographic variables, current drinking, lifetime illicit drug use, and internet use simultaneously as independent variables, current smoking as the predictor of interest, and DJGLS score as the outcome variable was conducted to test the independent smoking-loneliness association. The statistical significance level was set at P<0.05 (two-sided). All data analyses were conducted with SPSS 14.0.

Altogether, 1,452 students (response rate: 93.3%) completed the survey. The average age of these completers was 20.3 years [standard deviation (SD): 0.9, range, 16–26 years], and 59.7% were males. Detailed socio-demographic, substance use, and internet use characteristics of the study sample are displayed in Table 1. 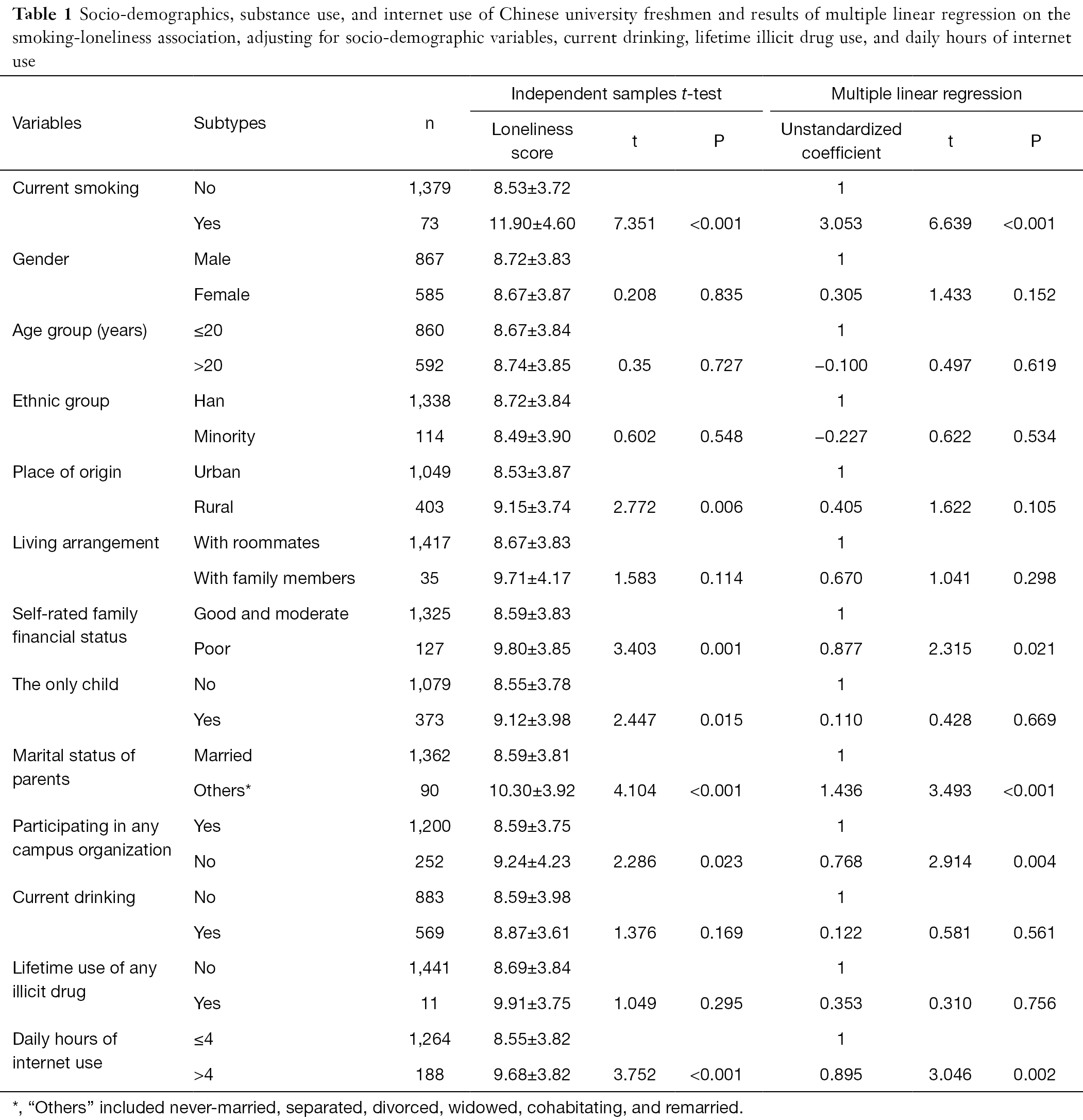 Table 1 Socio-demographics, substance use, and internet use of Chinese university freshmen and results of multiple linear regression on the smoking-loneliness association, adjusting for socio-demographic variables, current drinking, lifetime illicit drug use, and daily hours of internet use
Full table

There were 73 students (5.0%) reporting smoking at least one day in the prior 30 days. Current smokers had significantly higher DJGLS scores than non-smokers (11.90±4.60 vs. 8.53±3.72, P<0.001). After controlling for the potential confounding effects of socio-demographic variables, current drinking, lifetime illicit drug use, and daily hours of internet use, the positive association between current smoking and loneliness remained statistically significant (unstandardized coefficient: 3.053, P<0.001) (Table 1).

Compared to studies using similar definitions of loneliness (i.e., feeling lonely at least sometimes), the 22.1% prevalence is higher than that reported among Finnish older adults (18.0%) and similar to that reported among Chinese older adults receiving primary care (26.2%) (3,23). The finding that over one-fifth of freshmen felt lonely sometime, often, or always clearly confirms the elevated risk of loneliness in Chinese university fresh students.

Because smoking can facilitate social connectedness and integration in Chinese people (24), we hypothesized that smoking would be associated with lower risk of loneliness among Chinese university students. However, our results found an opposite significant association between smoking and loneliness in Chinese university freshmen: higher level of loneliness in smokers than non-smokers and independent and significant positive smoking-loneliness association. This phenomenon is in keeping with some prior studies (10,11,25). So it seems that social benefits of smoking are unlikely to decrease the risk of loneliness in Chinese fresh students. In addition to the above-mentioned self-medication theory, we consider that elevated risk of loneliness in freshmen might be attributed to the weak sense of belonging of smokers, because they are a minority group in universities: as indicated in our study, only 5.0% freshmen were current smokers. Importantly, because smoking is generally not allowed in Chinese universities and smokers are more likely to be excluded or even rejected by most students, a significant positive smoking-loneliness association is expected.

The current study has several limitations. First, the sample of freshmen was recruited from a Chinese university only, therefore, the sample representativeness is limited. We must be cautious when generalizing findings from this study. Second, this is a cross-sectional study, so the causal relationship between smoking and loneliness can not be ascertained. It is also possible that the smoking-loneliness relationship is bidirectional, which needs to be determined by prospective studies. Third, qualitative data can provide insights into the smoking-loneliness association, but we did not collect such data via in-depth interviews and focus-group discussions.

Despite these limitations, the significant smoking-loneliness association is an interesting phenomenon in Chinese university freshmen. Smoking freshmen could be considered as a target group of campus social work and mental healthcare services. This finding also suggests that smoking cessation is potentially helpful for preventing and reducing loneliness among Chinese university fresh students. Campus-based programs designed to reduce and prevent tobacco use in Chinese universities may include smoking ban policy, health education, refusal skill training for non-smokers, and smoking cessation services for smokers.

The authors thank all students and their supervisors from China University of Geosciences for their cooperation and support.

Funding: The study was supported by the National Natural Science Foundation of China (71774060, Bao-Liang Zhong, PI).

Reporting Checklist: The authors have completed the SURGE reporting checklist. Available at http://dx.doi.org/10.21037/atm-20-3523

Conflicts of Interest: All authors have completed the ICMJE uniform disclosure form (available at http://dx.doi.org/10.21037/atm-20-3523). The authors have no conflicts of interest to declare.

Ethical Statement: The authors are accountable for all aspects of the work in ensuring that questions related to the accuracy or integrity of any part of the work are appropriately investigated and resolved. This study was approved by the institutional ethics board of the Ethics Committee of Wuhan Mental Health Center (No. KY2019.07.01). Written informed consent was obtained from all participants.