Metformin and ovarian cancer: the evidence

Galega officinalis, i.e., goat’s rue or French lilac has been used to treat polyuria and other symptoms of diabetes for centuries (1). Metformin (1,1-dimethylbiguanide hydrochloride) was later extracted from this plant and it was found to have glucose-lowering activity more than 100 years ago (2). Metformin was officially introduced to diabetes treatment in 1957 (3). With few contraindications and strong evidence from clinical studies, along with usually manageable side effects, metformin is still the most widely recommended first-line medical treatment for type 2 diabetes (T2D) (4).

Drug repositioning or repurposing are defined as a method of finding novel diseases and target molecules for drugs with already existing indications (5). When successful, this may drastically save time and other resources compared with the traditional drug development. Some examples in the field of oncology are disulfiram and probably the most prominent example is aspirin in the prevention of colorectal cancer in patients with inflammatory bowel disease (6,7). Metformin is increasingly used in off-label indications, such as polycystic ovarian syndrome, obesity and metabolic syndrome (8). In the mid 1970s it was shown for the first time that biguanides inhibit mammary carcinogenesis in female rats (9). Suggested anticancer effects of metformin have drawn increasing attention during the last decade, mostly in breast cancer, but also considerably in the context of ovarian cancer (8). In the field of epidemiology, great interest in the possible role of metformin as a cancer-preventive agent arose in 2005 when an observational study from Scotland was published in which metformin use was related to a lower risk of cancer in general (10). At present, ovarian cancer patients are being recruited to take part in multiple randomized studies to evaluate the clinical efficacy of metformin (11). In this review, we will address the up-to-date preclinical and clinical evidence concerning metformin in the context of ovarian cancer.

In theory, metformin may have great potential as a drug to use in cancer prevention. Its anticancer effects have been traditionally divided into direct and indirect effects, although novel mechanisms of action are continuously emerging (Figure 1) (14). As a direct action against cancer growth, metformin reduces the energy consumption of (cancer) cells by inhibiting mitochondrial respiratory chain complex I (15). As an indirect anticancer effect, metformin reduces fasting plasma insulin levels and attenuates insulin resistance by increasing skeletal-muscle glucose uptake. This leads not only to metformin’s actual therapeutic effect, decreased blood glucose levels, but also cuts hyperinsulinemia. This may have effects on malignant cell mitogenesis and survival, since the association between insulin and insulin-like growth factor (IGF) in carcinogenesis has been repeatedly demonstrated (16), and cancer cells often show high-level expression of insulin receptors (14). Both indirect and direct routes are mediated by the cellular energy-status monitor adenosine monophosphate-activated protein kinase (AMPK), which under energy depletion is activated, switching the cell from an anabolic to a catabolic state (14). Metformin also very effectively attenuates p53 and mTOR signaling routes via AMPK (8,17). In the end, this leads to various growth-inhibiting properties including anti-mitotic and anti-inflammatory effects (18). AMPK activation has been suggested to play a most prominent role in the tumor-suppressing effects of metformin (19,20). LKB1 is a tumor suppressor gene with relevance to epithelial neoplasia. Beyond AMPK, the metformin-stimulated activation of LKB1 as well takes place in hepatocytes, and loss of its function is associated with Peutz-Jeghers syndrome (21). 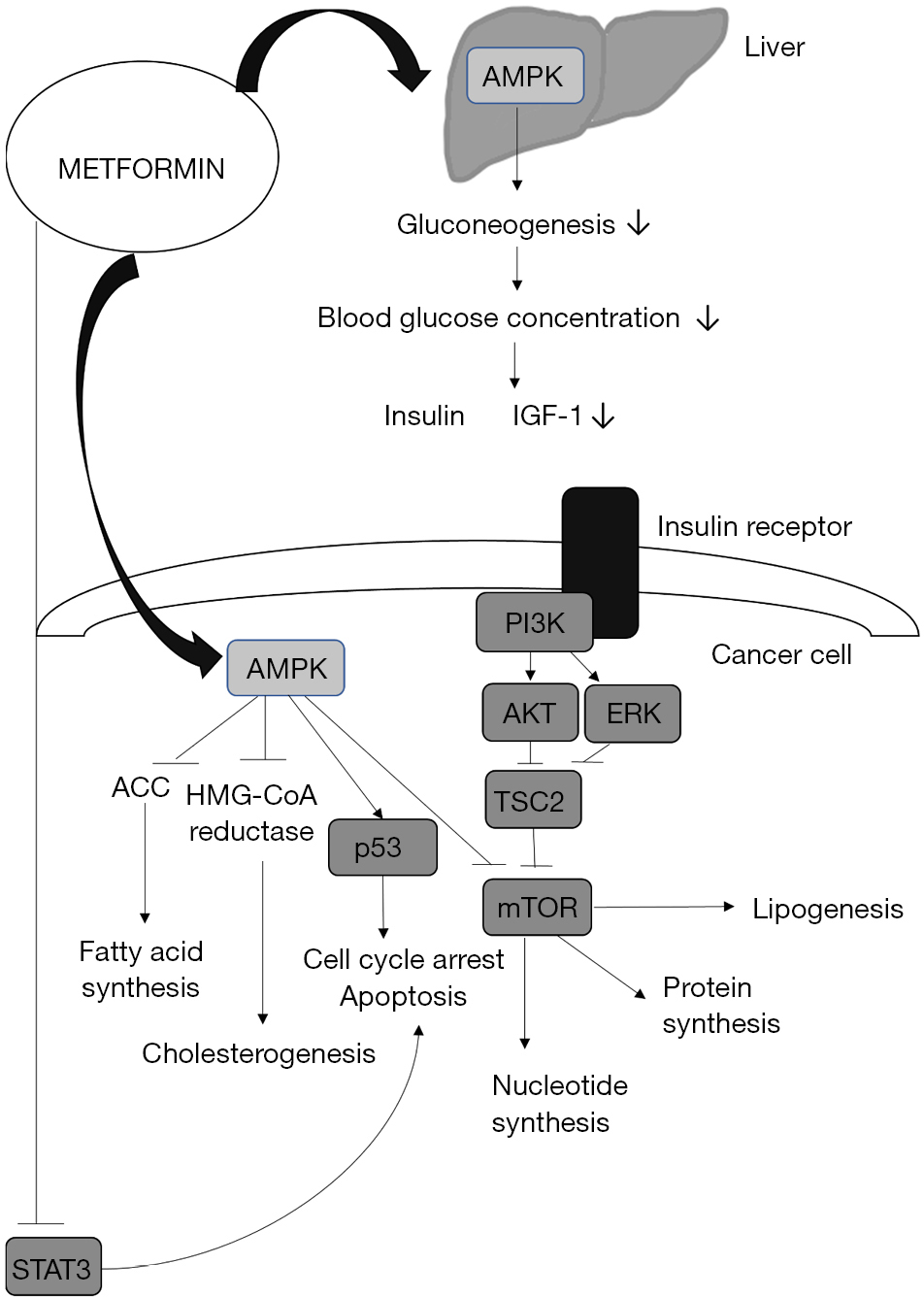 Of all the preclinically studied tumor types, one of the strongest indications supporting metformin’s anticancer effects comes from ovarian cancer studies (Table 1). Metformin effectively suppresses PI3K/AKT/mTOR signalling, e.g., in OVCAR-3 and SKOV3 cells, and triggers cell cycle arrest at the G2/M checkpoint (26,28). However, under hyperglycemic conditions metformin seems to have little or no anticancer effect in preclinical models, while low glucose levels enhance its cytotoxicity as a result of induction of ASK1-mediated mitochondrial dysregulation (29). mRNA and protein levels of the pro-survival and anti-apoptotic receptor tyrosine kinases Axl and Tyro3 are suppressed at transcriptional level when ovarian cancer cells are treated with metformin, and this leads to subsequent deactivation of downstream signaling molecules such as Erk and STAT3 (23). Indeed, STAT3 inhibition has been proposed as one of the most significant effects of the anticancer action of metformin in at least pancreatic and triple-negative breast cancers, although its dependence on mTOR signaling is still under debate (8). Metformin inhibits the AMPK-dependent growth of multiple ovarian cancer cell lines and inhibits several vital receptor tyrosine kinases of ovarian cancer, such as HER4, epidermal growth factor and platelet-derived growth factor receptor (31). 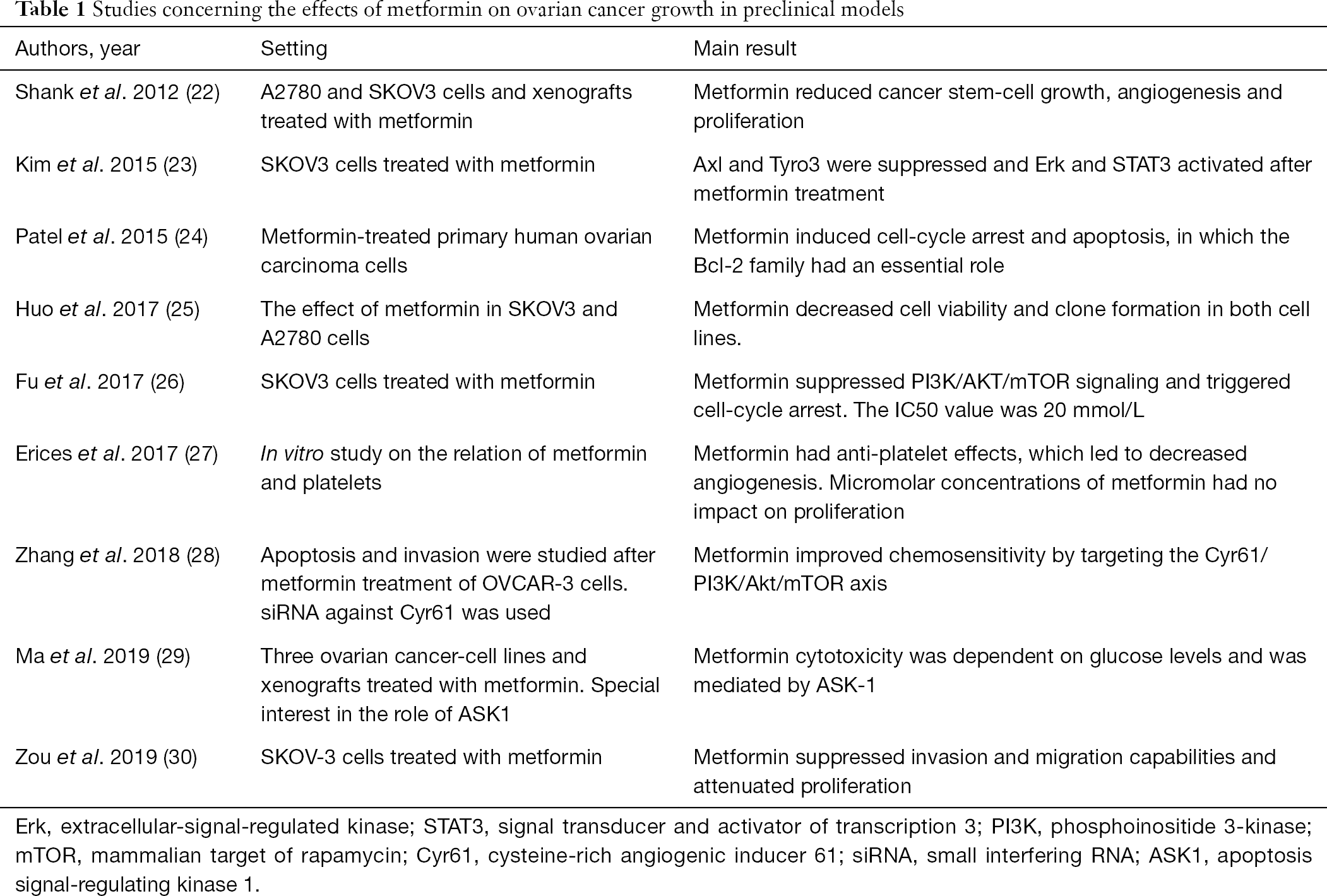 Angiogenesis is a crucial hallmark of ovarian carcinogenesis and also important from the therapeutic point of view. Decreased angiogenesis in metastatic tissues, attenuated ovarian cancer-cell adhesion and dampened macrophage infiltration were observed under metformin treatment in vitro and in vivo in murine experiments (32,33). Two other ovarian cancer studies showed that dampened neovascularization after metformin treatment can be driven either by blockage of the mTOR signaling pathway, or metformin’s ability to reduce the angiogenic and other carcinogenic properties of platelets (27,34). Intriguingly, from a clinical point of view, reduced angiogenesis was demonstrated using only micromolar concentrations of metformin. In other reports these near-pharmacological concentrations of metformin did not actually have any impact on proliferation in SKOV3, UCI101 or A2780 cell lines (35,36). Metformin treatment in vitro has also effects on stem cell differentiation and growth. Metformin targets ALDH+ ovarian cancer stem cell populations in vitro and in xenograft models, leading to suppressed angiogenesis and proliferation (22). A relatively low dose of metformin selectively inhibited CD44+CD117+ ovarian cancer stem-cells through downregulation of epithelial-to-mesenchymal transition, without affecting the cancer-cell proliferation rate (36).

Increased Bcl-2-protein family dependent apoptosis has been linked in many preclinical ovarian cancer studies to metformin’s chemosensitizing effects (24,32,37). Recently, additional mechanisms have also been revealed. Metformin may impede chemoresistance by targeting cancer stem cell populations and reducing the migratory properties of cancer via upregulation of taurine (38). On the other hand, the chemosensitizing effect of metformin seems to be crucially dependent on p53 function (39). In the presence of p53, metformin suppresses a major glycolytic enzyme, hexokinase II, and pyruvate dehydrogenase kinase, which is an anti-apoptotic serine/threonine kinase of the same pathway. This leads to sensitization of ovarian cancer cells to metformin, which does not occur in the case of mutated p53. However, mutation of p53 is considered to be a driver mutation in high grade serous ovarian carcinoma and is present in more than 96% of cases (40). Thus, other pathways for apoptosis are likely to be involved in these cancers. On the other hand, metformin also seems to have capability to re-sensitize cisplatin-resistant or paclitaxel-resistant ovarian cancer cells to chemosensitive cells, possibly by induction of autophagy or via the anti-inflammatory properties of metformin (27,41).

Efficacy of metformin in cell-line and animal studies

Although more than 70% of ovarian cancers respond to first-line chemotherapy (42), the majority of cases relapse and develop chemoresistance eventually (43). Multiple lines of evidence suggest that metformin can be used to overcome chemoresistance, especially cisplatin resistance, in ovarian cancer in vitro (Table 2). In one of the earliest studies, metformin was reported to enhance cisplatin activity in OVCAR-3 and OVCAR-4 cells. Metformin as a single agent was also demonstrated to reduce cancer cell proliferation in this work (44). The same group later showed that metformin induces cell cycle arrest and apoptosis in the same ovarian cancer cell lines by means of a mechanism that was independent of AMPK but dependent on Bcl-2-family proteins (37). These observations were later repeated in primary human ovarian carcinoma cells, isolated from ascitic fluid or omental metastases (24,47). Metformin also induces growth inhibition and shows synergy with cisplatin in a time- and dose-dependent manner in more invasive SKOV3 ovarian cancer cells (30). In cisplatin-resistant ovarian cancer patient-derived xenograft models, in vivo treatment with metformin partially reversed platinum resistance, although at a suprapharmacological dose of 400 mg/kg (48). Metformin also sensitizes ovarian cancers to paclitaxel in mouse models and induces cell death in SKOV3 cells or ovarian cancer primary cultures when treated with paclitaxel and carboplatin (20,31). 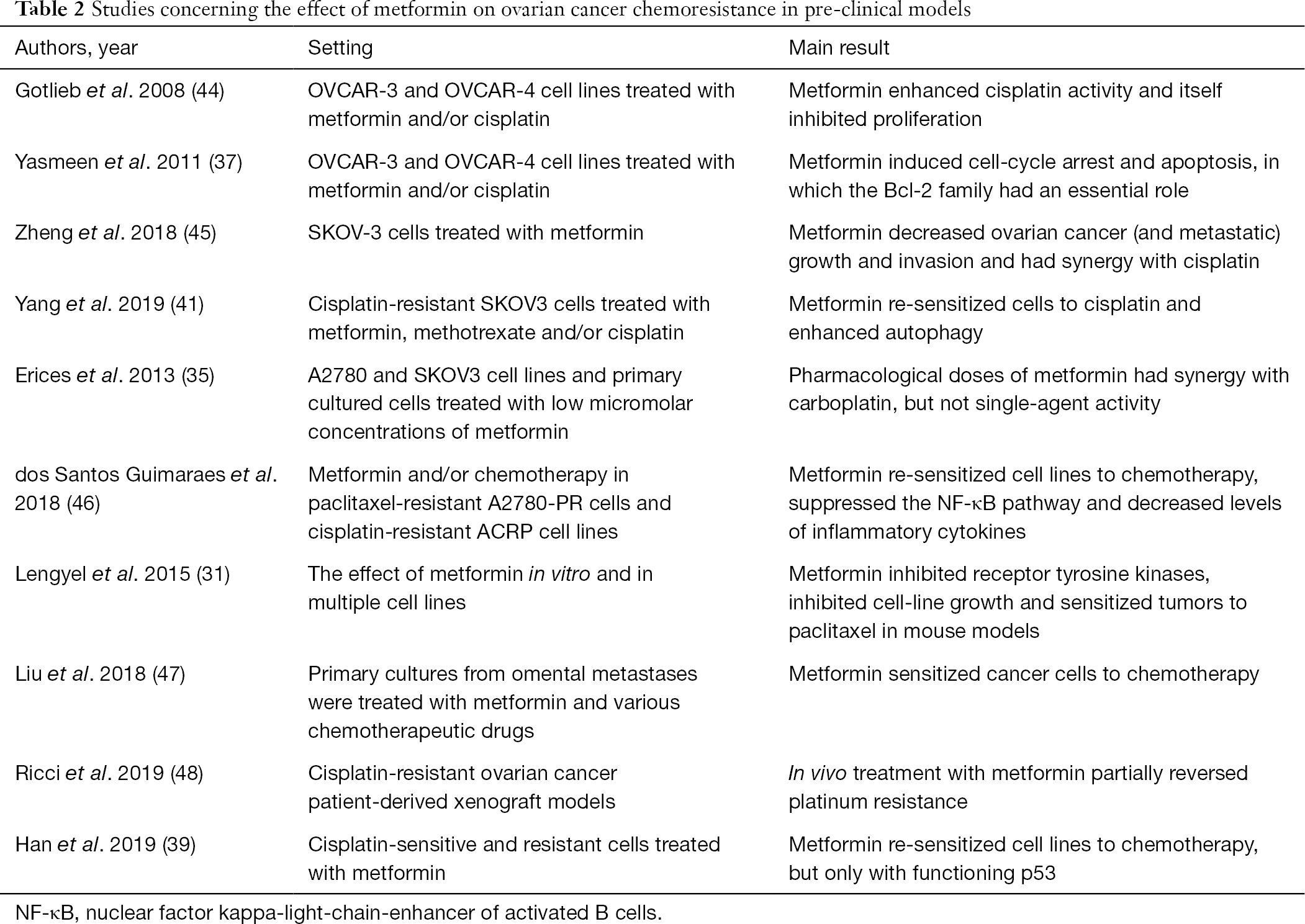 It has to be noted that in most of preclinical studies the used metformin concentrations have been millimolar or at least clearly above 2.7 µg/L (10 µM range), which has been reported to represent mean metformin plasma levels in metformin users (49). For example, in widely used SKOV3 ovarian cancer cells an IC50 value of 20 mmol/l has been reported for metformin (26). There is some evidence that even micromolar concentrations of metformin show synergy with chemotherapy in ovarian cancer cells, but only limited single-agent activity (35). On the other hand, metformin is not metabolized and relatively high metformin concentrations have also been found in tissues in vivo, especially in mitochondria. It may be argued that to achieve these such a concentrations and to study effects of metformin when administered over long period of treatments, millimolar metformin concentrations of metformin should be used in in vitro experiments (24). As a cation, metformin has a tendency to accumulate, especially within mitochondria, showing 100- to 500-fold concentrations (50). Nano-encapsulation of metformin into polymeric nanoparticles has been very recently developed in order to overcome metformin’s poor cell-membrane permeability. This approach was shown to induce metformin cytotoxicity by reducing cell viability, and bringing cells to G2/M arrest, apoptotic morphological changes and alteration in the expression levels of several apoptotic genes and tumor suppressors p53 and hTERT in SKOV3 cells (51). 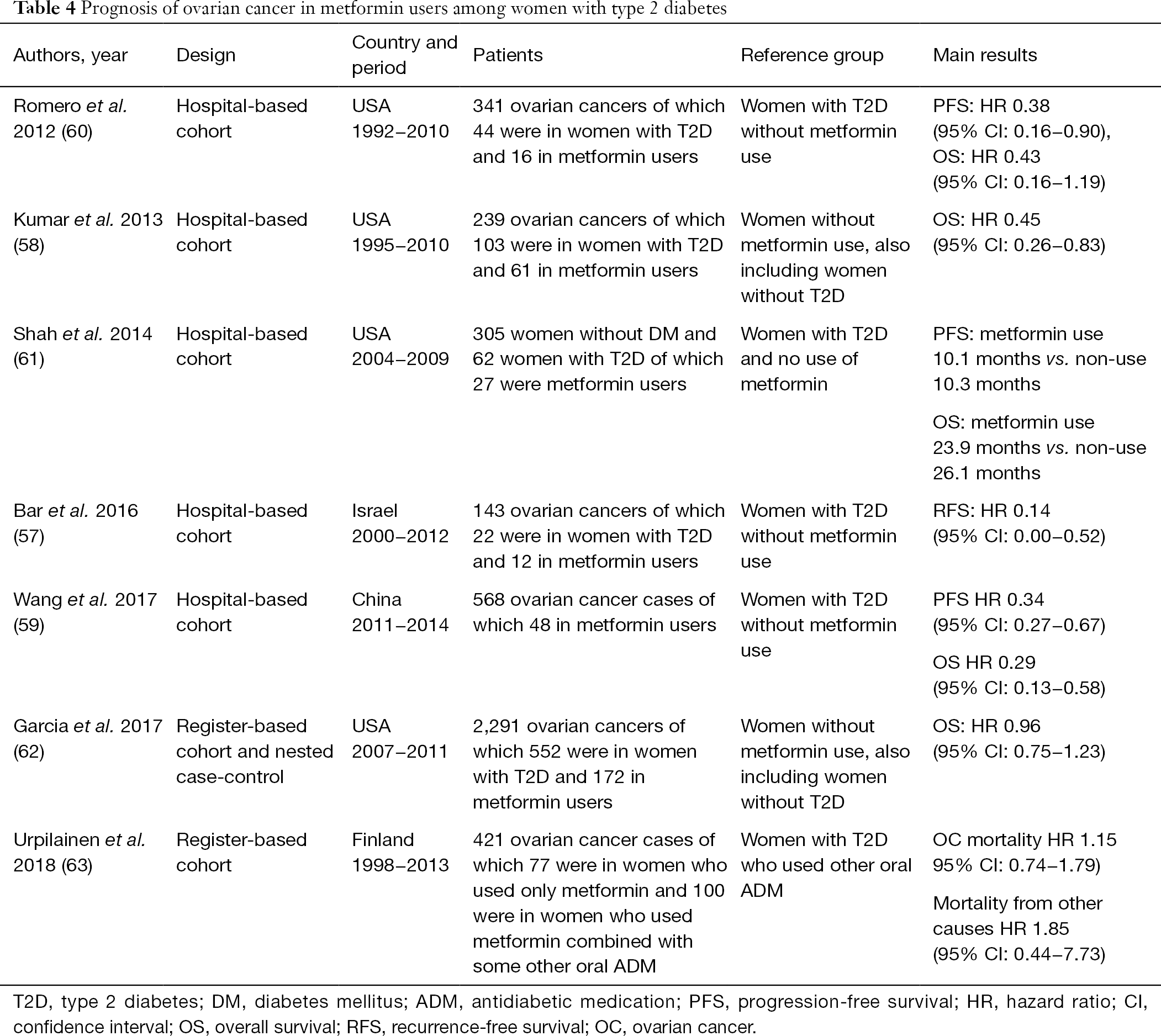 There are few clinical trials designed to evaluate metformin as therapeutic agent in ovarian cancer. At the moment, there are two recruiting and two completed clinical trials on ovarian cancer and metformin use (11). In a pilot study by Zheng et al., there were 20 ovarian cancer patients without a diagnosis of T2D receiving metformin along with adjuvant chemotherapy (paclitaxel and carboplatin) in first-line treatment of ovarian cancer (64). In this study, metformin use did not improve progression-free survival (PFS). However, modulation of the IGF-1 signaling axis was seen in the metformin group. Khawaja et al. have published a study in which patients with advanced or refractory cancer types were treated with an mTOR inhibitor, temsirolimus, in combination with metformin (65). With combination therapy a promising response with few side effects was achieved when assessing all cancers together. However, there were only two ovarian cancer cases in this study.

In preclinical studies, metformin has been found to have several direct and indirect mechanisms which make it anti-mitotic, anti-angiogenic, anti-inflammatory and a cellular-energy-state modifier. These cancer preventing assets are well-studied in ovarian cancer cells. However, the results of epidemiological studies are not as well defined. There is not enough evidence to verify the role of metformin as an ovarian cancer preventive drug. In addition, association between metformin and survival after ovarian cancer is complex. Thus, it is unlikely that metformin has an anticancer role as monotherapy. Hopefully, ongoing clinical trials will more specifically clarify the role of metformin in ovarian cancer treatment in the near future.

Funding: This project was supported by the Jane and Aatos Erkko Foundation (grant number T59127), the Cancer Society of Finland (T59129) and Finnish Government Research Funds granted to the University Hospital of Oulu.

Conflicts of Interest: All authors have completed the ICMJE uniform disclosure form (available at http://dx.doi.org/10.21037/atm-20-1060). The series “Ovarian Cancer: State of the Art and Perspectives of Clinical Research” was commissioned by the editorial office without any funding or sponsorship. SB serves as an unpaid editorial board member of Annals of Translational Medicine from Nov 2019 to Oct 2021. EU reports grants from The Cancer Society of Finland, during the conduct of the study. UP reports grants from Jane and Aatos Erkko Foundation, during the conduct of the study. The other authors have no conflicts of interest to declare.