Hepatocellular carcinoma (HCC) accounts for the majority of primary liver cancers. Because of hepatitis B or C virus (HBV or HCV) infection or alcohol abuse, the most of HCC patients have a background of liver disease (1-3). The prognosis of HCC is very poor. M6A has been shown a reversible modification in messenger RNA (mRNA) and can regulate processing, translation and decay of mRNA. Dysregulation of m6A genes have an effect on oncogene expression, indicating the m6A and tumorigenesis are related (4-6). Emerging evidence suggests that m6A modification is associated with the tumor proliferation, differentiation, invasion and metastasis in malignant tumors (7,8). We aimed to basing on the m6A genes to establish a prognostic model of HCC.

The traditional prognostic predictors of HCC mainly depend on the tumor size, clinical stage, AFP and the pathological findings (9-11). Currently, there are some prognostic model based on the differentially expressed genes (DEGs) between HCC and para-carcinoma tissue. However, the predictive sensitivity and specificity of these above factors are not high.

The m6A associated genes are being studied extensively in various tumors (12). The modification of m6A methylation including three types of protein factors: “writers” (methyltransferases, METTL3, METTL14, and KIAA1429), “erasers” (demethylases, ALKBH5 and FTO), and “readers” (YTH domain containing RNA binding proteins, YTHDF1, YTHDF2 and YTHDF3) (13,14). Although the m6A has been studied in many other tumors, the role of m6A in HCC is still not well defined. Furthermore, the prognostic function of m6A genes still not been explored in HCC.

This project designed to build a new prognostic model of HCC patients. Basing on the clinical and transcriptome sequencing data of 377 HCC patients from TCGA database, the m6A DEGs between HCC and para-carcinoma tissue were analyzed. This prognostic model will provide a more accurate and effective prediction of HCC patients’ prognosis, and it’s also the first time to combine m6A associated genes to predict the prognosis of HCC.

The mRNA expression profiles and the clinical data from the patients with HCC were downloaded from the TCGA, which containing 374 HCC tissues and 50 normal tissues. As the data from the TCGA are publicly available and open-access, our ethics committees did not need to approve the study. The current research follows the TCGA data access policies and publication guidelines. The ten pairs of matched HCC and para-carcinoma tissue, which were used to verify the expression of the m6A genes, were obtained from the liver surgery department of Peking Union Medical College Hospital, and approved by the Medical Ethics Committee of Peking Union Medical College Hospital of the Chinese Academy of Medical Sciences (CAMS) & PUMC.

M6A genes and the prognosis of HCC

We searched the current literatures about m6A, and list all the m6A genes. Then download the raw counts of the HCC mRNA expression profiles from the TCGA databases. The differentially expressed m6A genes were calculated using R package with an adjusted P value of <0.05 were considered significant difference. We performed a Consensus Cluster Plus analysis based on the expression level of mRNAs, and divided the HCC patients into two clusters. Then a Principal Component Analysis (PCA) were conducted between these two clusters. We also performed a survival analysis in the two clusters based on the clinical data from the TCGA, to identify the relationship between the expression level of m6A genes and the prognosis of HCC.

We analyzed the correlation between the expression level of each m6A gene and the overall survival (OS) of HCC patients by univariate analysis. The gene was considered significant when the P value was <0.05. Then, a Lasso-penalized Cox regression analysis was employed to identify the prognostic model. The HCC patients were divided into high and low risk group according to the risk score, and a Kaplan-Meier (K-M) survival analysis were conducted between the low- and high-risk group. ROC curve analyses were performed to assess the predictive power of the prediction model. Univariate and multivariate Cox regression analyses were performed to determine whether the prognostic model could be independent of other clinical variables (including age, gender, histologic grade and tumor stage) for patients with HCC. All reported P values were two-sided. The hazard ratio (HR) and 95% confidence intervals were calculated.

According to the results of bioinformatics analysis, the expression level of m6A genes, which included in the prognostic model, were validated by PCR using ten pairs of matched HCC and para-carcinoma tissue obtained from our center. Total RNA of tissue and cells was extracted with Trizol (Thermo Fisher Scientific) and all reagents used in the experiment were RNase-free. Actin was used as internal reference in PCR.

The m6A genes and the prognosis of HCC

According to the current literature reports, we confirmed 13 m6A genes. A total of 11 differentially expressed m6A mRNAs (P<0.05) were identified in the mRNA expression profiles of HCC tissues (n=374) compared with normal tissues (n=50), as shown in the heat map and violin plot (Figure 1). Further, the correlation between all the m6A genes’ expression level in HCC were identified. Based on the consensus clustering approach, we divided the 374 HCC patients into two clusters, according to the expression level of mRNAs in HCC. The result of PCA indicated that these two clusters were independently divided (Figure 2A). The survival analysis Cluster 2 showed a poorer prognosis (P=6.197×10-4) compared with cluster 1 (Figure 2B). And we verified that the m6A genes’ expression level in cluster 2 were higher than cluster 1 by heat map analyzing (Figure 3A). 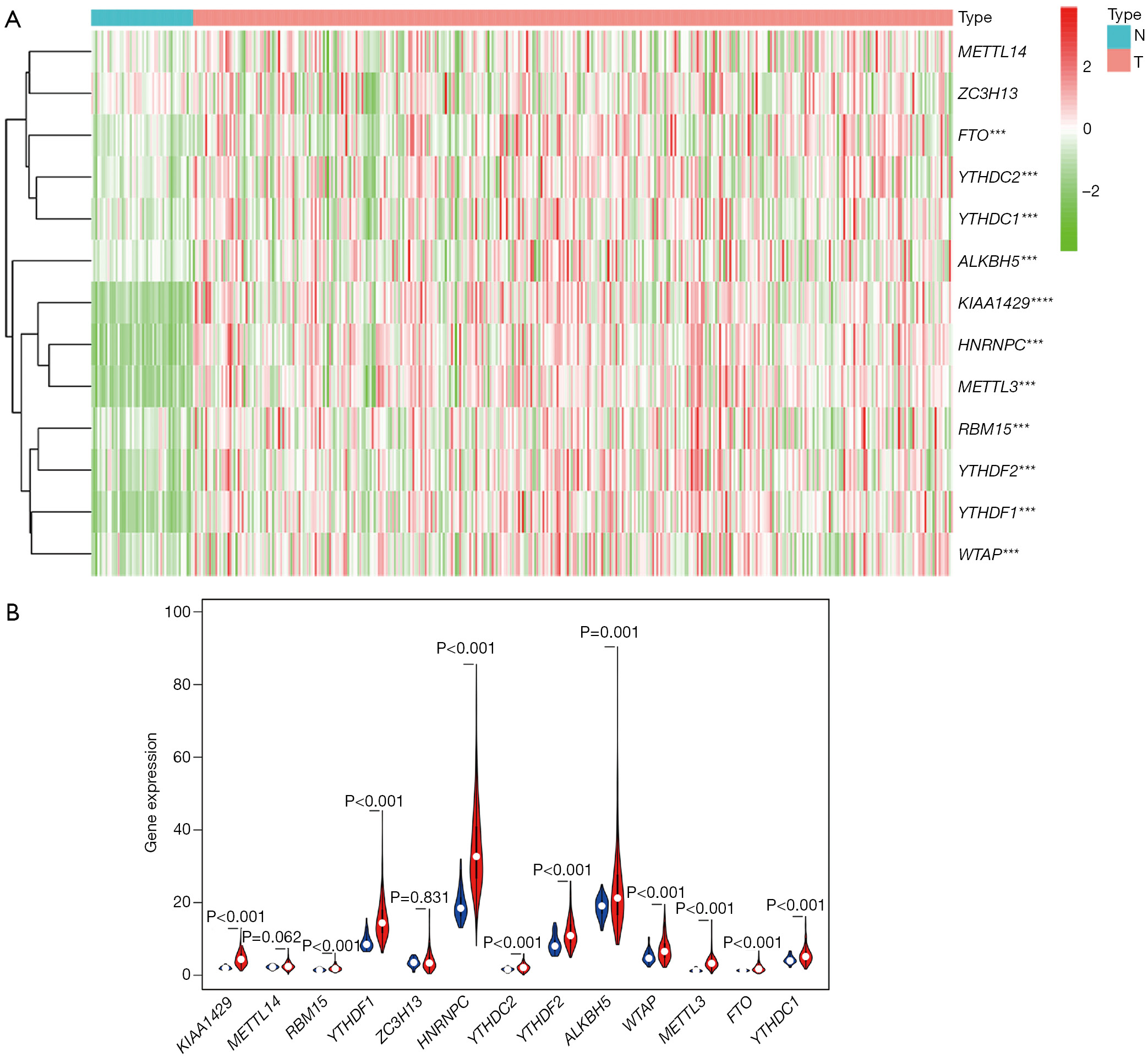 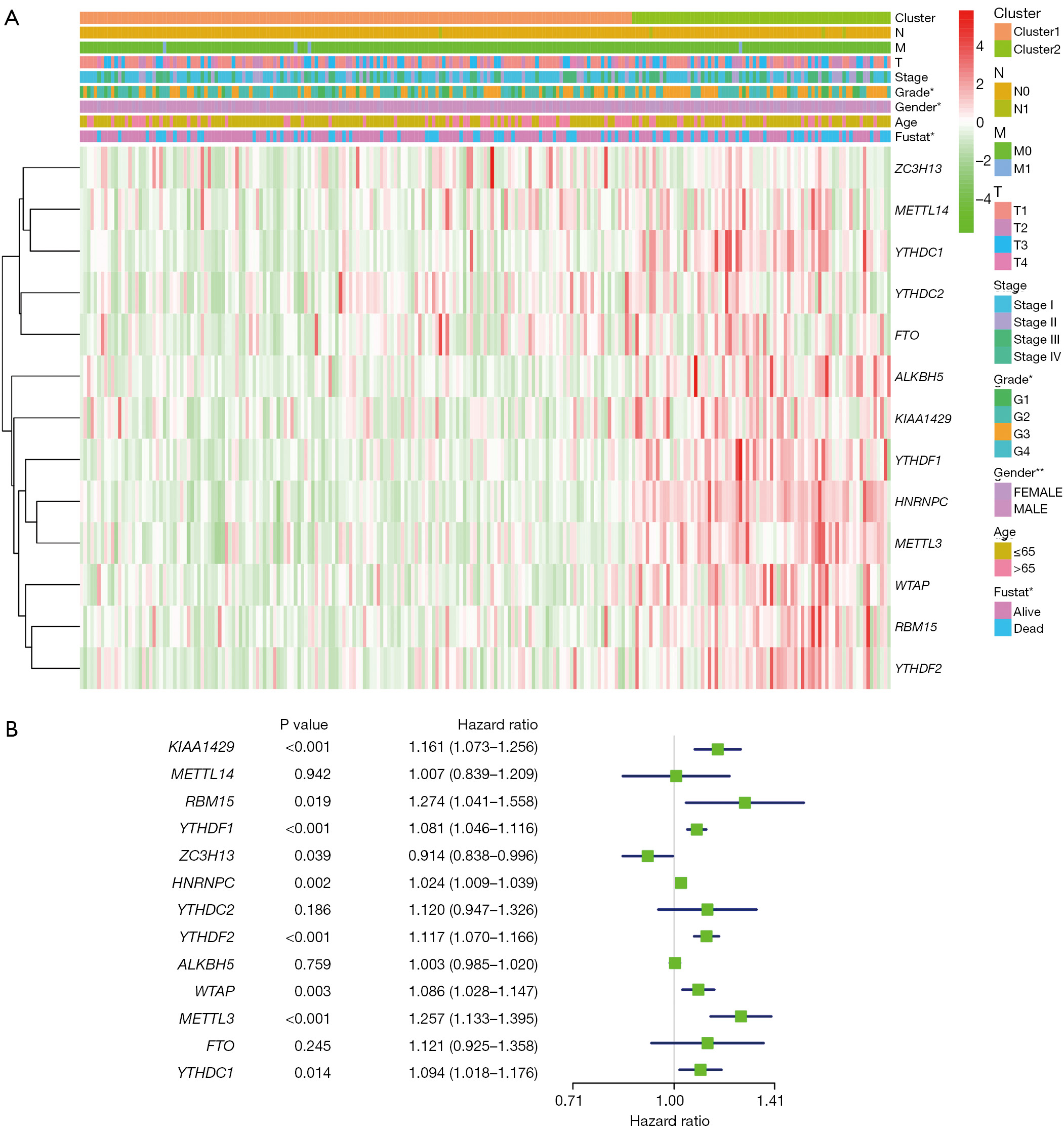 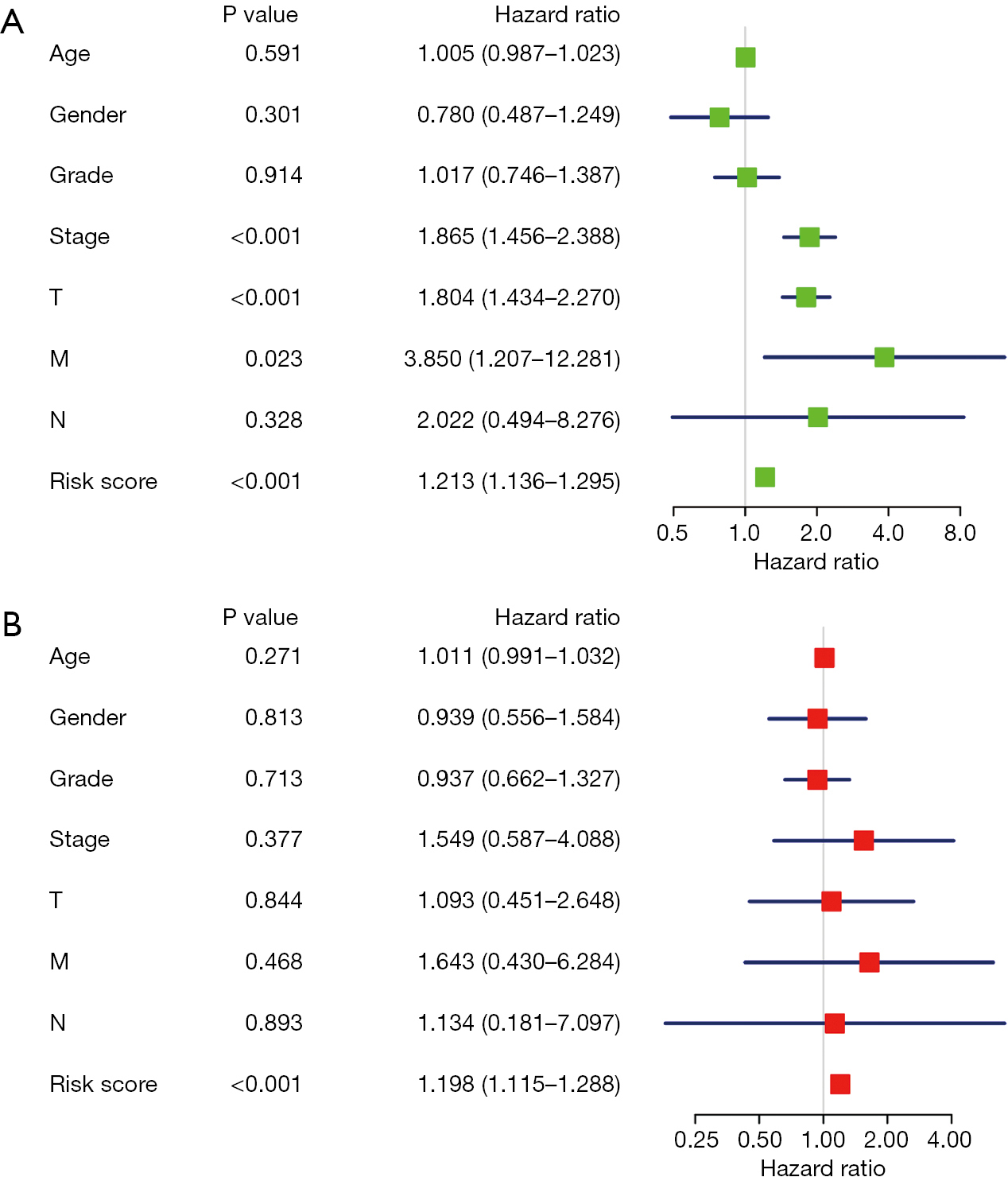 As the difference of the expression level of gene ZC3H13 was not significant between HCC and para-carcinoma tissue, we only validated the rest four m6A genes (KIAA1429, METTL3, YTHDF1, YTHDF2) included in the prognostic model. These four genes were all significantly high expressed in HCC (P=0.0355, P=0.0232, P=0.0355 and P=0.0185 respectively) (Figure 6) in accordance with the result of the TCGA data. 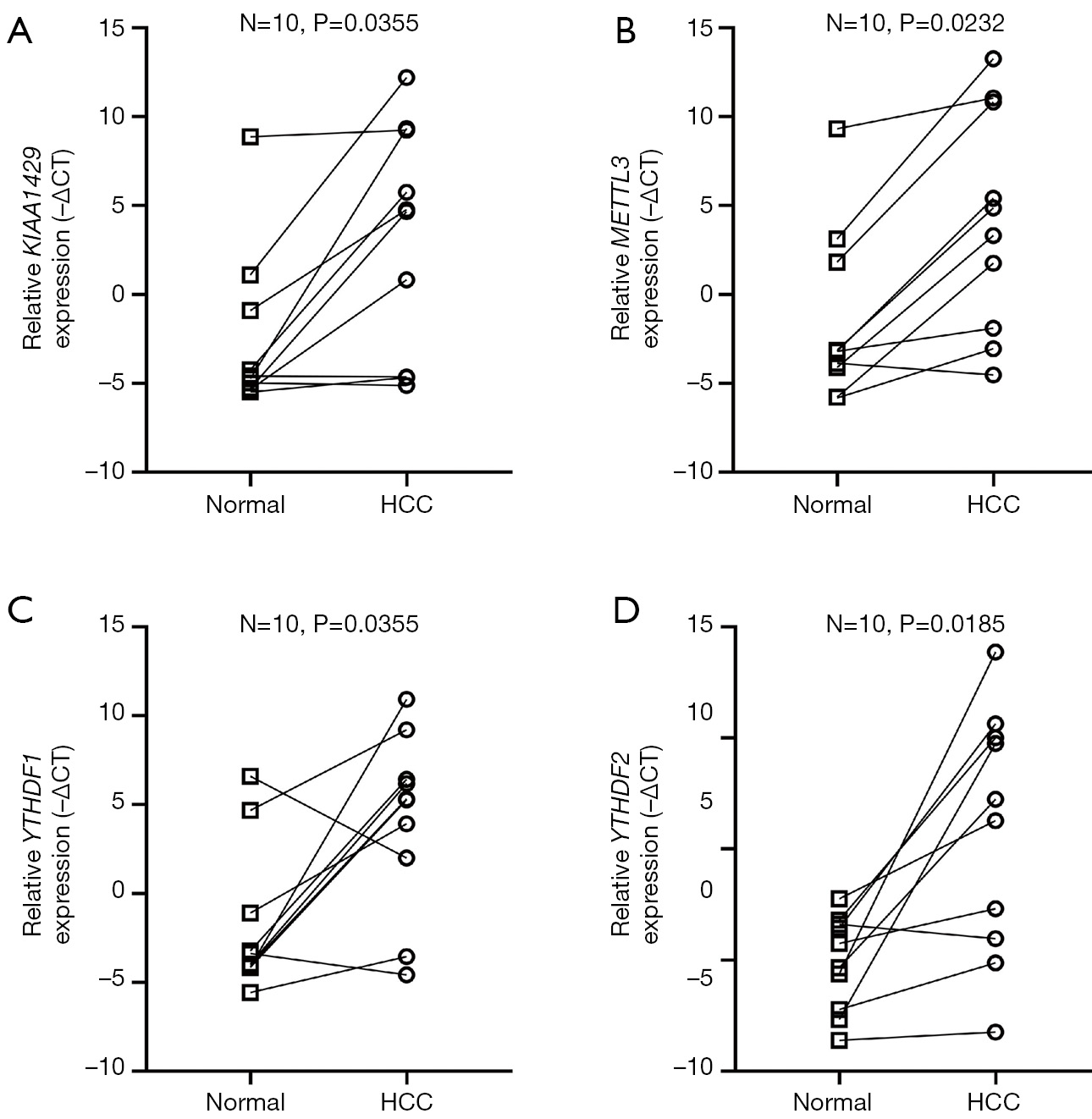 Figure 6 The PCR validation of four m6A genes included in the prognostic model. KIAA1429, METTL3, YTHDF1 and YTHDF2 were all significantly high expressed in HCC tissues, which in accordance with the results of TCGA. HCC, hepatocellular carcinoma.

The current prognostic predictors of HCC are lack of specificity and sensitivity (15,16). The function of m6A associated genes in tumorigenesis and progression has been intensively explored. But the prognostic value of m6A genes in cancers still not well verified. Our study designed to analysis the differentially expressed m6A genes and establish a prognostic model of HCC. Firstly, we confirmed 11 m6A genes were high expressed in HCC compared with para-carcinoma tissue, and the high expression level of m6A genes associated with a poor prognosis of HCC. Then we developed a prognostic model consist of m6A genes. According to the risk score, HCC patients were divided into high- and low-risk group, and the high-risk group have a significant poor prognosis after survival analysis. After univariate and multivariate Cox regression analyses, this prognostic model be confirmed as an independent prognostic factor of HCC.

KIAA1429 is an important methyltransferase, which categorized as the components of ‘writers’ in m6A modification. There are studies revealed that reduction of KIAA1429 can significantly inhibited tumor proliferation, migration, and invasion by regulating mRNA methylation levels of ID2 in HepG2 cells. KIAA1429 increased the m6A level of ID2 mRNA, and this will decreased the ID2 expression and facilitated cell invasion and migration in HCC (17). It has been reported that GATA3 was the downstream target of KIAA1429, and the KIAA1429 produced m6A methylation on the 3'-UTR of GATA3 pre-mRNA, leading to GATA3 pre-mRNA degradation. Overexpression of KIAA1429 was correlated with poor prognosis in HCC (18).

METTL3 is an RNA methyltransferase involved in mRNA decay, translation and biogenesis control via m6A modification (19,20). METTL3 was reported to be related with gastrointestinal tumors, such as gastric cancer (21-23), colorectal cancer (24,25) and pancreatic cancer (26). As to HCC, METTL3 can inhibits SOCS2 expression, which could promote HCC cell proliferation, migration and colony formation (27). Meanwhile, METTL3 was observed to be upregulated in liver cancer and was found to promote its progression. In addition, METTL3 upregulation contributes to HCC metastasis and associated with a poor prognosis in HCC patients.

YTHDF2 also be proven associated with many tumors like colon cancer (29). Based on the current evidence, the high expression of YTHDF2 can suppress cell proliferation and tumor growth in HCC cells. Mechanistically, YTHDF2 via bound the m6A modification site of EGFR 3’-UTR to enhance the degradation of EGFR mRNA, which may repress cell proliferation and growth in HCC (30). There is another study indicated that YTHDF2 reduction in HCC cells promoted vascular reconstruction, inflammation and metastatic progression, which associated with the prognosis of HCC patients (31).

However, there are some limitations in this study. First, the population in the TCGA database are mainly White people and Black people, and extrapolating the results to other ethnic groups needs to be carefully substantiated. Second, this study mainly focused on bioinformatics analysis. Although the high expression of the four m6A genes in HCC are identified by PCR, this study still lacks of mechanism verification. Our next work will continue to focusing on the specific mechanisms of these genes in liver cancer. Third, the test performance of this model is still relatively low, and we will also explore the possibility of containing more prognostic variables to further improve the performance.

This prognostic model can not only provide a prediction of HCC patients’ prognosis, as for the m6A genes, it will also point one direction for further research of HCC mechanism, and the potential value in diagnosis and treatment of HCC still to be explored.

Conflicts of Interest: All authors have completed the ICMJE uniform disclosure form (available at http://dx.doi.org/10.21037/atm-20-2894). The authors have no conflicts of interest to declare.

Ethical Statement: The authors are accountable for all aspects of the work in ensuring that questions related to the accuracy or integrity of any part of the work are appropriately investigated and resolved. The study was approved by our institutional ethics committee. Written informed consent was obtained from the patient for publication of this manuscript and any accompanying images.