Neuroendocrine tumors (NETs) are a rare, highly malignant form of tumor. NETs Derived from neuroendocrine cells and peptidergic neurons (1), NETs originate from the peripheral neuroendocrine cell system dispersed in all organs. Although NETs are most commonly found in the gastroenteropancreatic (GEP, about 60%) system and the bronchopulmonary tract (about 30%) (2,3), any part of the body may serve as the primary site. In this report, we describe the imaging features and clinical diagnosis strategy of a rare primary NET of the left ventricle. We present the following case in accordance with the CARE reporting checklist (available at http://dx.doi.org/10.21037/atm-20-3049).

A 51-year-old woman who had suffered recurrent diarrhea for 2 years (5–6 times per day), abdominal pain, and vomiting presented at local hospital. The patient had no history of surgery, drug allergy, intestinal tuberculosis, typhoid or paratyphoid fever, or Crohn’s disease. Endoscopy showed chronic proctitis and duodenal ulcer, and repeated hospitalization provided relief for the patient.

The patient was referred to our hospital on 13 Dec 2018 after her symptoms recurred. Over the previous 2 years, the patient’s weight had decreased by over 10 kg. On physical examination, the patient’s bowel sounds were 4 times/minute. Endoscopy at our hospital revealed chronic atrophic gastritis, duodenal ulcer, and chronic proctitis. The patient’s tumor marker levels were normal. However, the clinical symptoms of the patient could not be explained. 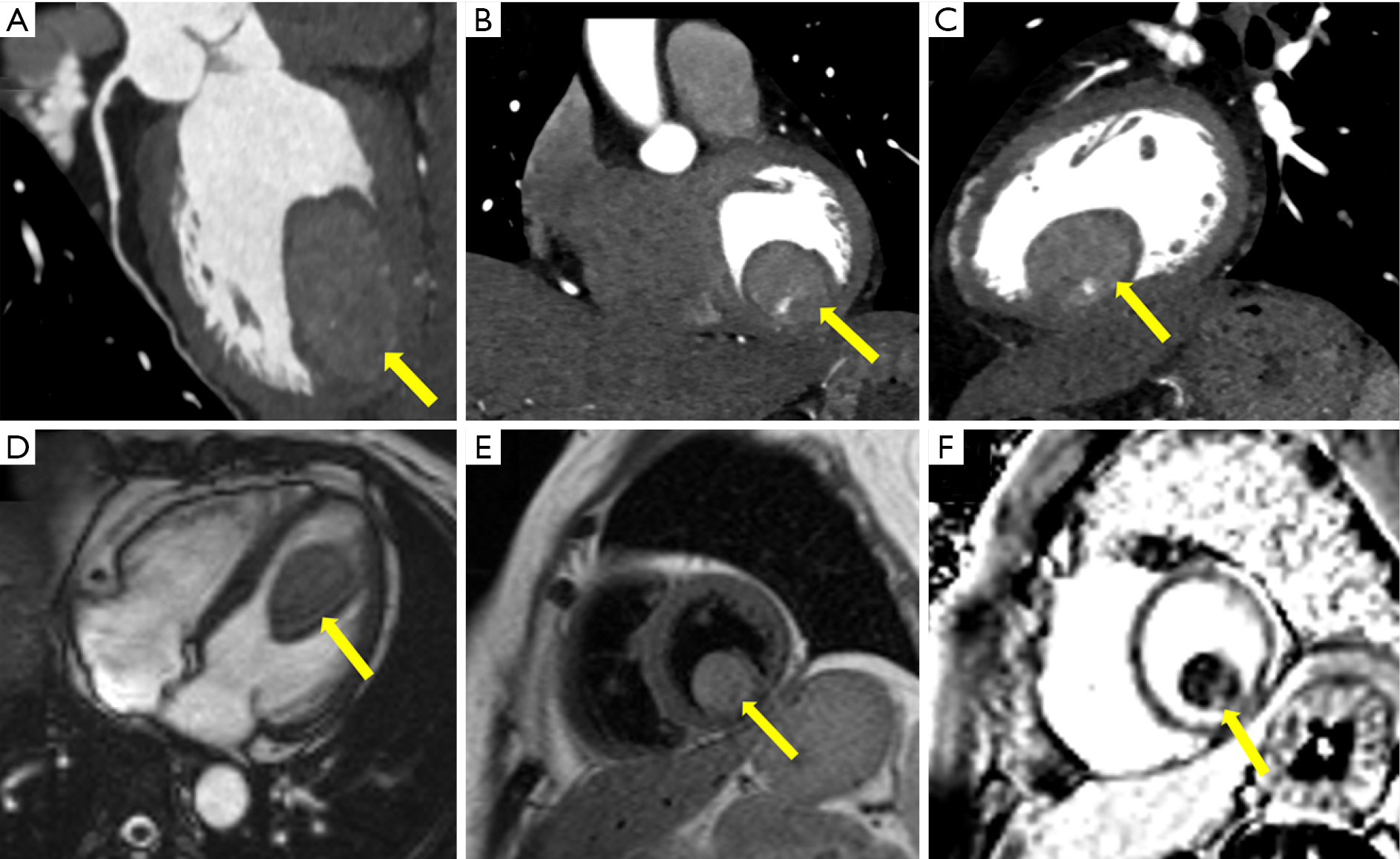 Figure 1 CT and CMR imaging features of the tumor. (A,B,C) The mass was located in the lower wall of the left ventricle (yellow arrow) on 3D coronary computed tomography angiography; (D) the signal of the mass, located in the left ventricle on CMR four-chamber cine sequence, was equal; (E) the mass had a slightly higher signal on T2WI; (F) an internal stripe enhancement was seen in the mass on late gadolinium enhancement imaging. CMR, cardiac magnetic resonance; T2WI, T2 weighted imaging.

By cardiac magnetic resonance (CMR) four-chamber cine sequence, a mass was detected in the left ventricle, with no thickening of the ventricular septum or free wall (Figure 1D). T2 weighted imaging (T2WI) showed the mass to have a clear boundary and slightly higher signal (Figure 1E). Late gadolinium enhancement (LGE) imaging revealed an internal stripe enhancement in the mass (Figure 1F). Based on CT and CMR, myxoma or sarcoma of the left ventricle were considered.

The patient underwent surgical resection to remove the mass. Intraoperative transesophageal ultrasound showed a 39 mm × 27 mm mass with an echo equal to that of the left ventricle short axis 0° (Figure 2A) and long axis 90° (Figure 2B). The mass was about 35 mm × 25 mm in diameter (Figure 2C), involving the anterior papillary muscle and slightly adhering to the myocardium of the diaphragmatic surface of the left ventricle. A surface section showed that the capsule of the mass was intact, mostly grayish-yellow and medium tough (Figure 2D). Specimens of the tumor were subjected to pathological examinations. A microscopic examination of hematoxylin-eosin stained tissue demonstrated that the tumor cells were fusiform or ovoid, bunched together, and arranged in a palisade pattern. Nuclear divisions were rare, and there was no atypia (Figure 3A). Postoperative pathological results indicated a NET (G1), and immunohistochemical results showed: CD56 (+), Cg A (+), Ki-67 (2%) (+), CK (+) and NSE (+) (Figure 3B,C,D,E,F). 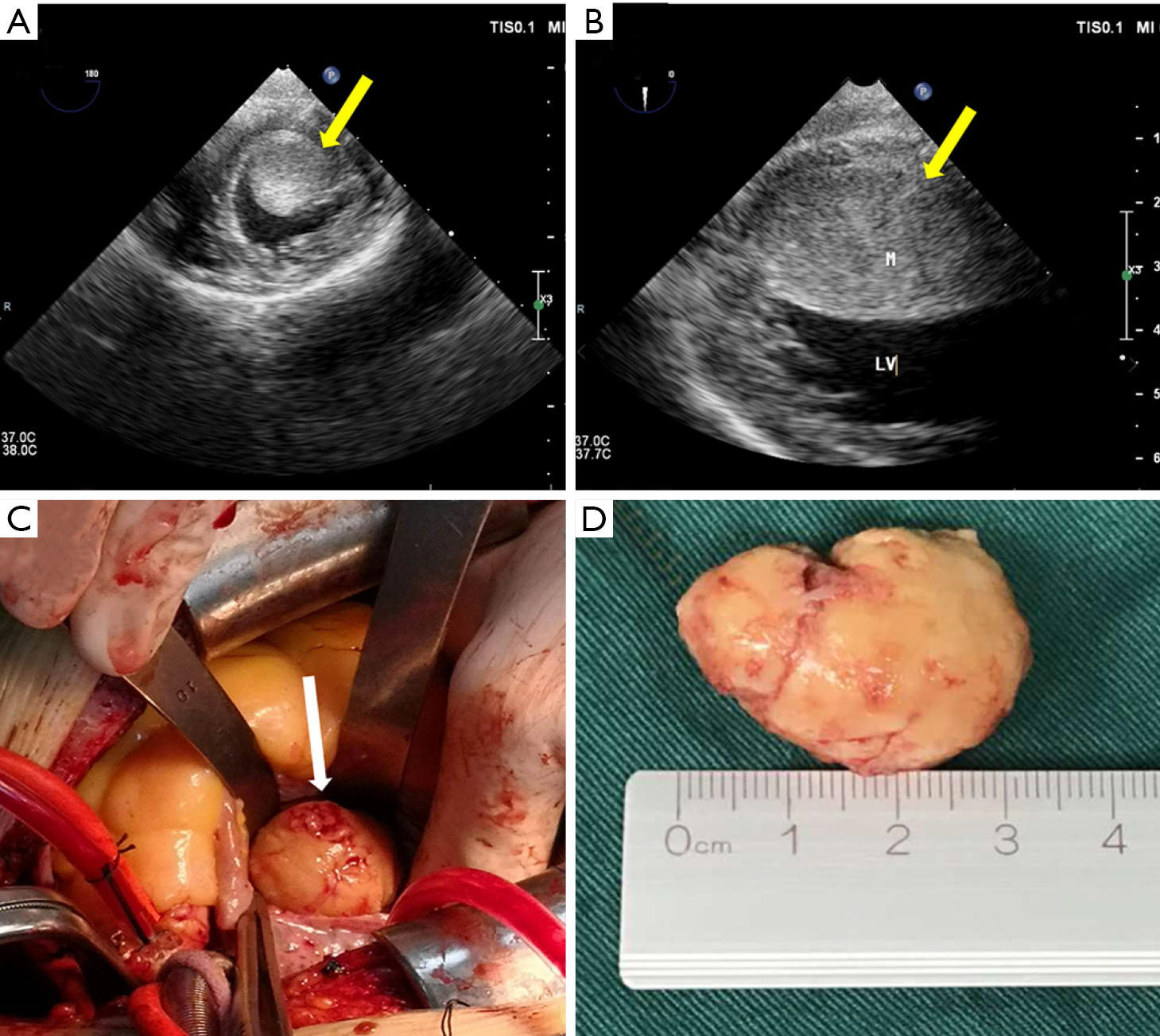 Figure 2 Ultrasound features of the tumor. (A,B) Intraoperative transesophageal ultrasound revealed a mass with an echo equal to that of the left ventricle; (C,D) the mass, with intact capsule, was grayish-yellow. The diameter of mass was approximately 35 mm × 25 mm.

No postoperative complications occurred and the patient’s diarrhea and vomiting symptoms improved after the mass had been resected. Moreover, on doctor’s advice, the patient has visited our hospital for reexamination, and no recurrence or other signs of metastasis have been found by echocardiography or computed tomography during a 13-month follow-up.

Originating from the peripheral neuroendocrine cell system, NETs are defined as epithelial neoplasms with predominant neuroendocrine differentiation. In recent years, the cases of NETs have been increasing owing to the improvements in diagnostic modalities and surveillance. A crude rate of global occurrence has been estimated to be 5.85/100,000 yearly (4). NETs can arise in almost any of the body’s organs, with the most common location being the GEP system and lungs; however, primary NETs in the heart are exceptionally rare. Cardiac tumors rarely cause chest pain, arrhythmia, or heart failure, and usually go undetected for a long period of time (5).

As shown in this case, the patient mainly presented with diarrhea and repeated abdominal pain. Consequently, the clinicians initially considered it to be a digestive system disease. Following this reasoning, a mass in the left ventricle is difficult to detect. Fortunately, abdominal CT located the mass in the left ventricle. The mass was thought as myxoma, which is the most common primary tumor of the heart.

NETs are usually classified based on the Ki-67 index and the mitotic index (6). At the same time, NETs can be divided by phenotype into functional or non-functional tumors. Functional tumors can secrete high levels of certain hormones which induce a hormone-specific syndrome (7). In this case, the patient presented with diarrhea and vomiting, and the hormone-related markers were not detected. Therefore, this tumor in the left ventricle tended to be non-functional. The patient’s diarrhea and vomiting symptoms also improved after the mass was surgically resected.

For NET patients, the main therapeutic option is surgical excision (8). The purpose of the surgery is to reduce the cardiac-related risk of complications and to confirm the pathological biopsy. In addition, for the majority of patients, somatostatin analogs are appropriate as initial treatment for the control of carcinoid syndrome and inhibition of tumor growth. In this case, CT and CMR revealed the patient to have no other abdominal or pelvic masses, and there was no evidence of metastasis and no systemic symptoms or signs of carcinoid syndrome after surgery. Moreover, no recurrence or other signs of metastasis were found during a 13-month period of follow-up.

The accuracy of CT and CMR in the diagnosis of cardiac tumors has increased during the past few decades (9,10). Primary NETs in the heart are extremely rare, and there are no associated masses or abnormalities in the gastrointestinal tract or lungs. Accurate diagnosis of NETs is highly challenging. NETs of the heart should be considered when there are abdominal symptoms originating from non-abdomen/pelvis lesions. Biopsy serves as the gold standard for diagnosing NETs.

Reporting Checklist: The authors have completed the CARE reporting checklist. Available at http://dx.doi.org/10.21037/atm-20-3049

Conflicts of Interest: All authors have completed the ICMJE uniform disclosure form (available at http://dx.doi.org/10.21037/atm-20-3049). The authors have no conflicts of interest to declare.

Ethical Statement: The authors are accountable for all aspects of the work in ensuring that questions related to the accuracy or integrity of any part of the work are appropriately investigated and resolved. Written informed consent was obtained from the patient’s daughter for publication of this case report and any accompanying images.