I congratulate Dr. Wang et al., for their recent publication entitled “eEF2K mediated autophagy as a potential therapeutic target for paclitaxel-resistant triple-negative breast cancer” published in Annals of Translational Medicine. In this study, the authors suggested that silencing of eEF2K might be a potential novel strategy for treatment of triple-negative breast cancer (TNBC), thus, targeting eEF2K with drugs can be a follow-up or rescue treatment for the refractory breast cancers resistant to a standard chemotherapy. In addition to surgical removal and radiation therapy in the advanced TNBC-stage IV, standard treatment of TNBC can be divided into chemotherapy, immunotherapy, and cancer vaccine application (Recommendation by American Cancer Society). As a standard treatment, anthracyclines, taxanes, capecitabine, gemcitabine, eribulin etc., can be used for TNBC stage IV, and neoadjuvant chemotherapy and adjuvant chemotherapy with capecitabine for TNBC stage I–III treatment. When we find BRCA mutation or chemoresistance from a patient, application with platinum drugs (cisplatin or carboplatin) or PARP inhibitors may be considered. However, the immunotherapy (atezolizumab along with Abraxane) can be the first choice of treatment in the advanced TNBC with PD-L1(+). Because immunotherapy helps to restore immune response against the breast cancer cells by using a checkpoint that was exploited by the cancer cells, whereas the indication can be found in about 20% of TNBC. In systemic therapy, TNBC mostly depends on paclitaxel-based chemotherapy despite a development of resistant clones after the treatment.

Based on the controversial reports on the effect of autophagy regulating prognosis of TNBC, the authors started to raise a question about whether inhibiting autophagy can sensitize the resistant tumor cells to cytotoxic therapy or not. What is the role of eEF2K in cancer cell survival, and in autophagy regulation? Whether the relationship between eEF2K and autophagy has any therapeutic implications or not? Whether autophagy contributes to cell death after chemotherapy or whether autophagy represents a resistance mechanism in cancer cells? By employing the paclitaxel-resistant TNBC cell lines, MDA-MB-231/tax and MDA-MB-468/tax cells, and the residual disease after neoadjuvant chemotherapy in human, they observed sustained autophagy potential in the chemo-resistant TNBC and the potential of eEF2K targeting to reverse aggressive nature of TNBC. When they co-treated 231/tax cells with chloroquine, autophagy inhibitor, and paclitaxel, IC50 of paclitaxel became 12-fold lower than that in the paclitaxel alone treatment. The co-treatment effect of chloroquine on the IC50 of paclitaxel was 4-fold lower in the 468/tax cells than that in the parental cells. However, the effect of chloroquine on the IC50 of paclitaxel was minimal in the parental cell lines, suggesting that autophagy might have a significant impact in the paclitaxel resistance in TNBC cells. Indeed, spheroid formation of the 231/tax and 468/tax cells was suppressed by chloroquine co-treatment as compared to minimum effect in parental cells. The finding was also observed in the suppression of cancer cell invasion, when evaluated by Transwell assay. The data implicate that chemo-resistance in TNBC cells might be induced by autophagy during chemotherapy. The assumption can be supported by the previous reports; autophagy is induced by chemotherapy (1) and the survival of chemo-resistant cells usually depends on autophagy (2). However, effect of autophagy on cell death and survival has been reported as controversial (3-5); autophagy can suppress tumorigenesis initially, but afford macromolecular building blocks to the established tumor mass under stress condition, and the long-term induction of autophagy results in apoptosis.

When the authors compared autophagy regulating genes between the paclitaxel resistant cells vs. parent cells, there was no difference in the expression of autophagy initiating genes except increase of eEF2K in the 231/tax and 468/tax cells. eEF2K, Ca++/calmodulin-dependent protein kinase III, is a well-known negative regulator of protein synthesis by phosphorylating Thr56 in eEF2, which inhibits peptide chain elongation by inactivating eEF2. The role of eEF2K in the regulation of cytoprotective effect of cancer cells is definitive under the nutrient starved condition via inhibition of protein biosynthesis. However, activation of autophagy by eEF2K in cancer cells has been reported as controversial; eEF2K makes a substantial contribution to the cytoprotective effect of mTORC1 inhibition without autophagy induction in the cells with highly active mTORC1, which has been evidenced in the genetically modified MEFs, human colon carcinoma HCT116 cells, and human lung carcinoma A549 cells (6). In contrast, silencing of eEF2K promotes autophagic survival via activation of the AMPK-ULK1 pathway in colon cancer cells, independent of the suppression of mTOR activity and ROS generation (7). In the present study, autophagy flux was significantly reduced along with the inhibitions of proliferation and invasiveness of the 231/tax and 468/tax cells, when eEF2K was silenced by siRNAs, implying that autophagy potential significantly influenced chemoresistance in the TNBC/tax cells. The paclitaxel resistant TNBC cells already gained eEF2K high expression along with increase of autophagy flux, which can suppress protein biosynthesis in the chemo-resistant cells. If I summarize the authors’ data, I can suggest it as a cunning maneuver by cancer cells (Figure 1); TNBC/tax cells prefer the less expensive metabolic route to maintain their survival rather than the novel highly expensive biosynthesis pathway, so called via the Detour Pathway. Thus, chemoresistant cells get a chance to keep multiplying under a harsh condition. 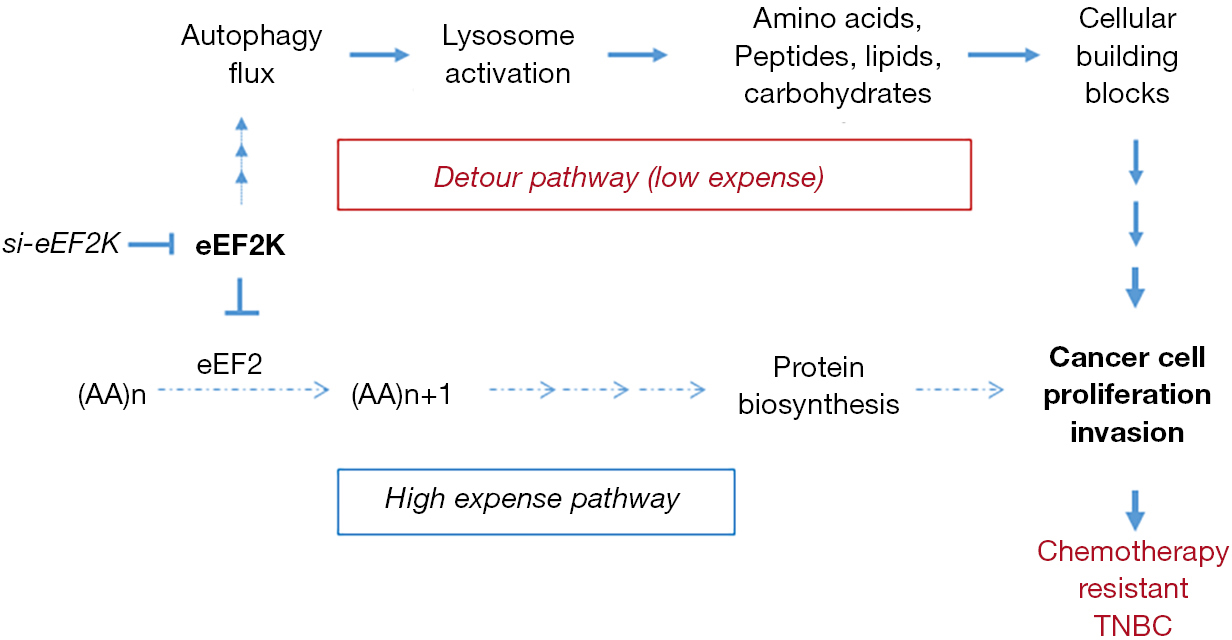 When the authors classified breast cancer patients into two subtypes, luminal-like (HR+) and TNBC (HR−), induction of eEF2K expression was more commonly observed in the TNBC patients than that in the luminal-like (P<0.006). Based on the P values, hazard ratios, and 95% CIs for all variables, expressions of LC3, eEF2K and Ki67, and residual lymph node status were independent predictors of disease free survival in the TNBC patients. Moreover, LC3+ and eEF2K high expressers revealed worse prognosis than those of the LC3− and eEF2K lower expressers. If we consider the lack of definitive target therapy in the TNBC patients with resistance against standard chemotherapy and immunotherapy, inhibition of autophagic flux by eEF2K silencing can be a new target for the refractory breast cancer treatment. Indeed, paclitaxel resistant TNBC cells fail to activate detour mechanism of cell multiplication after eEF2K knockdown, leading to increased burden of protein biosynthesis under energy depleted condition. In the present study, the authors cautiously suggested application of eEF2K and autophagy markers to further classify potential chemoresistant TNBC patients into a different risk group without any explicit explanation how eEF2K regulates autophagy in the chemoresistant TNBC cells. If we assume that eEF2K mainly regulates autophagy in the residual TNBC tissues, eEF2K can evoke systemic chemoresistance in the subsequent disease progression. However, there is an open question and fundamental hurdles facing the treatment of TNBC because of the too high mutation rate and cancer cell heterogeneity even in a single tumor mass. As reported previously (3-5), the effect of autophagy on cell death and survival is differential depending on the carcinogenic process of each cancer cells, e.g., initially suppress tumorigenesis, but afford building blocks to the established cancer cells later. If we can synchronize all cells in tumor tissues, paclitaxel treatment along with regulation of autophagy flux by eEF2K may control chemoresistance in the residual breast cancer tissues. In summary, there is a possibility that eEF2K and autophagy cooperate in the chemoresistant refractory TNBC to maintain their survival and multiplication via the less expensive detour pathway (Figure 1).

The Figure 1 used in this article is my own product explaining Wang et al.’s work.